I am creating this page because one day, in May 2011, I was poking around the Niantic area of East Lyme. I saw an interpretive sign near here and went to go check it out. Then a train came over this little tunnel, which leads to a semi-public town beach and McCook Park.

And I thought that was pretty cool. 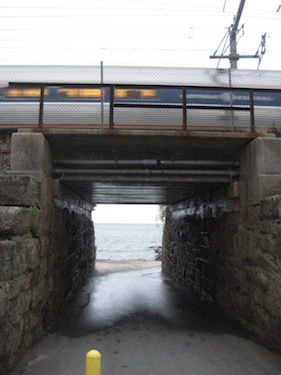 There are, of course, other places in Connecticut with this same situation – notably a couple miles away from here at Rocky Neck State Park. But that one doesn’t have a sign like this one does. A sign that says:

The Hole in the Wall

The railroad between New Haven and New London was originally a single track. To allow for higher speed and more frequent trains the railroad was double-tracked and completed in 1894. At that time, the “Hole in the Wall” was constructed. Underpasses such as this were commonly built to prevent dangerous and illegal railroad crossings by pedestrians. In Niantic, this underpass also provides access to the shore. Coastal access continues to play an important role in East Lyme’s economy.

Exciting stuff. And I like how, because we’re Connecticut, there’s no worry or thought about switching from East Lyme and Niantic. 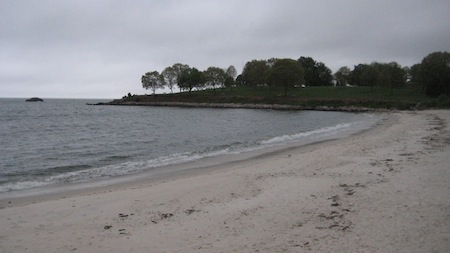