With used bookstores such rarities these days, I visit and write about some them on CTMQ if only because they’ll likely be extinct by the time I die.

Hoo boy, that was a rough lede. Sorry to bum you out. 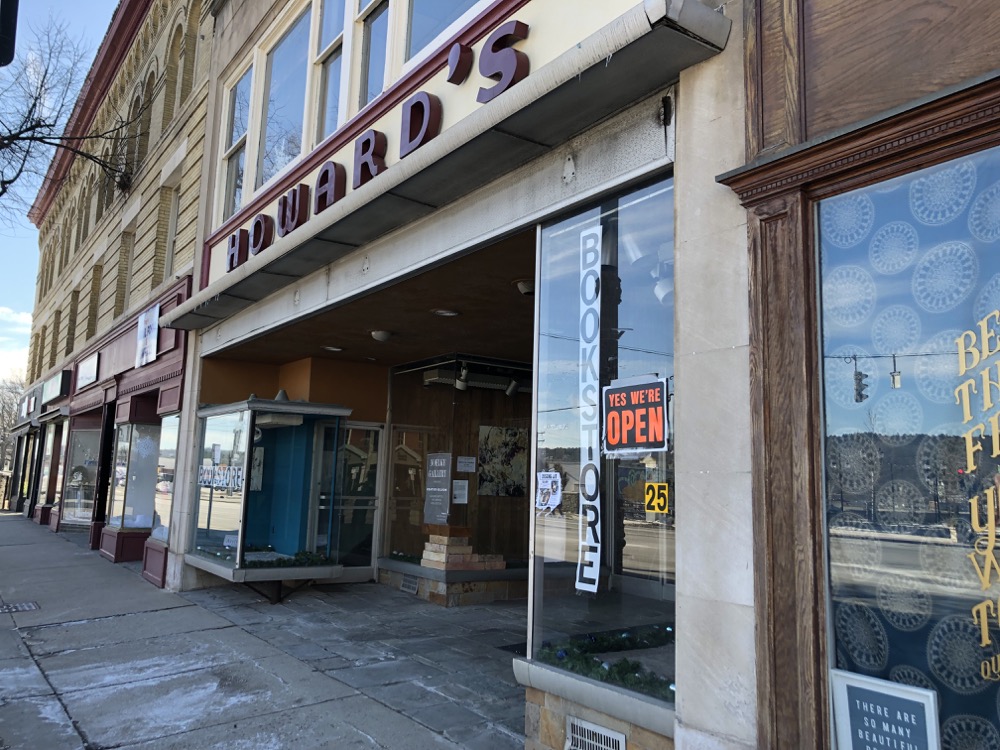 I’m sure some will outlive me. And I hope they all do! It’s just such a tough business to be in these days… online shopping and a global pandemic and… I visited Howard’s in 2022. There was no heat and there were no other customers. The place was a tattered DIY hodgepodge of books and art and, weirdly, a bunch of shoes and shoe stuff.

And here’s why: The bookstore’s owner is not named Howard. The Howard’s name comes from the space’s former occupant, Howard’s Family Shoe Store which lasted until the mid-1990’s. Like every other Main Street retailer of the sort, it couldn’t survive malls and suburbs. (It didn’t really make it long enough to get crushed by online retailers.)

Howard’s was owned by the Strogatz brothers for 50 years or so. None of them were named Howard either. The heck? 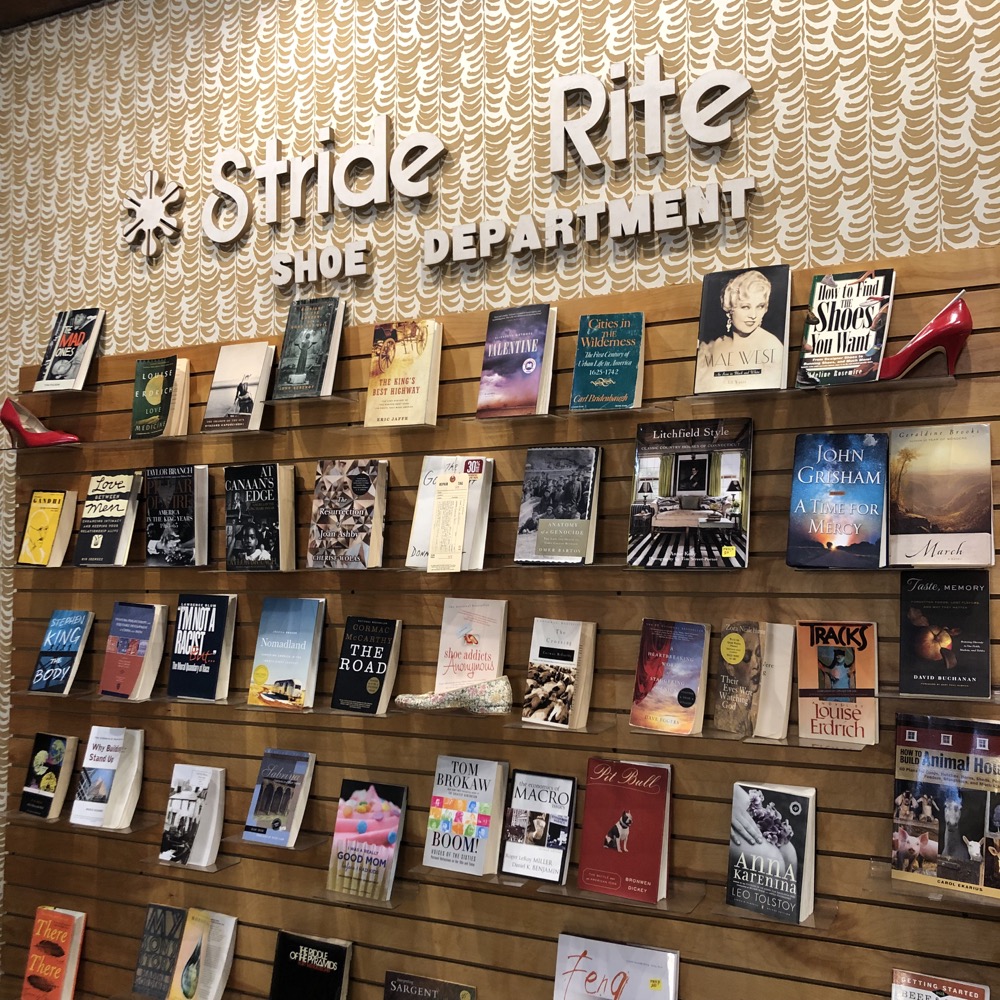 In 1939, the Strogatz brothers and another partner opened the store. They called it Howard’s after the newborn son of partner Clarence Wolk. Mystery: solved. Howard’s 2022 Bookstore retains the name of Howard’s Shoe Store which was named in 1939 after a business partner’s newborn son because, according to George Strogatz in a 1996 article, “We thought that sounded like a business-sounding name; something that people would remember.”

I guess he was right. After all, here we are reading about Howard almost a century later. If Howard Wolk is alive today, he’d be 83 years old. Mr. Wolk, if you’re reading, hello! I hope you are well.

Update: I have been informed that Mr. Wolk passed away in March 2022.

The shoe store was destroyed in the 1955 Flood like half of Torrington, but bounced back in the current Main Street space. It sat vacant for many years before John Noelke purchased the whole dang building in 2020. 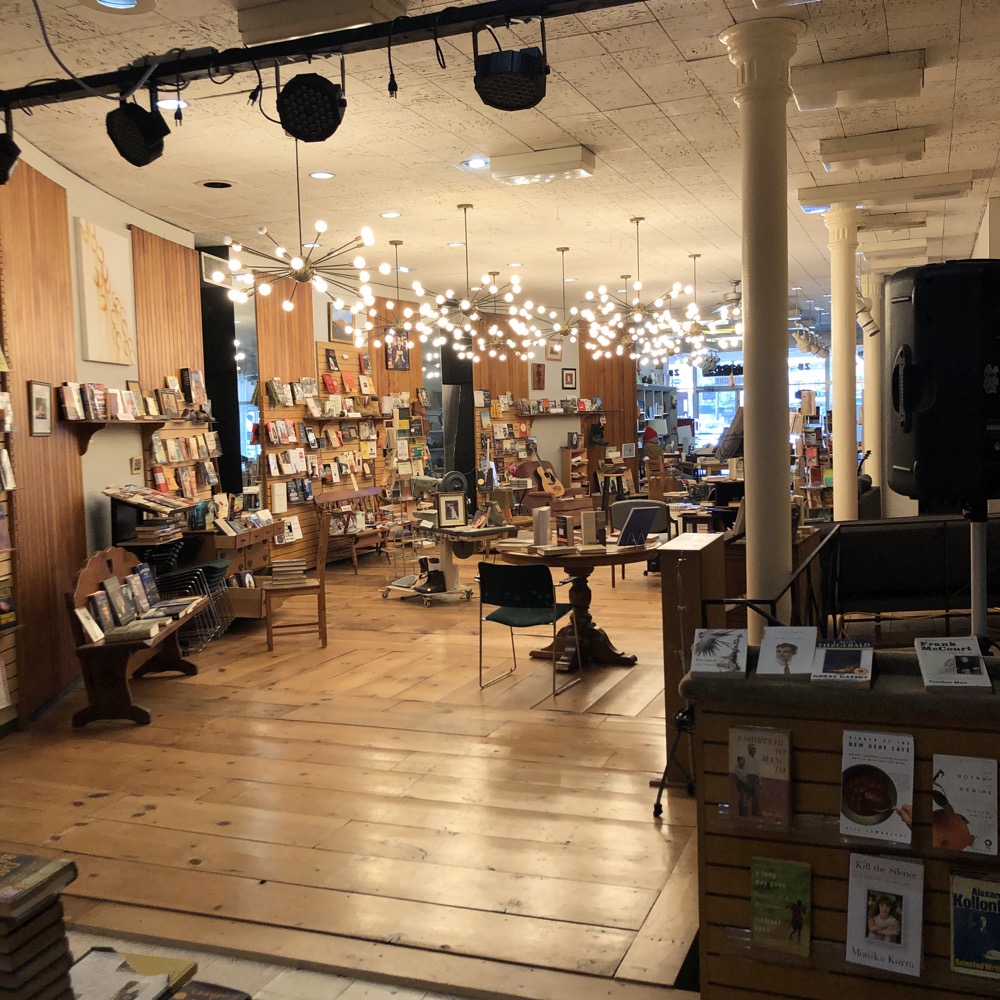 While cleaning up the joint, Noelke found a bunch of shoes. And promotional shoe items like old Buster Brown and Hush Puppies stuff. Oof, mid-1970’s flashbacks for me just now.

Noelke was sitting in his old wooden chair when I arrived and just sort of told me to poke around. Me? Poke around a bookstore? Well, yeah. I poked around, admittedly a little creeped out by the shoes because I didn’t yet know the story of the shoes. I honestly thought it was a John Noelke thing and I didn’t much care for it.

Howard’s is not “just a bookstore,” because Noelke knows that “just a bookstore” will fail in 2022. It is a meeting place and a live music venue and an art gallery. Or at least that’s the plan. (It is all three in one way or another; it’s just that a random visit on a winter Saturday at opening didn’t make any of that evident to me.) 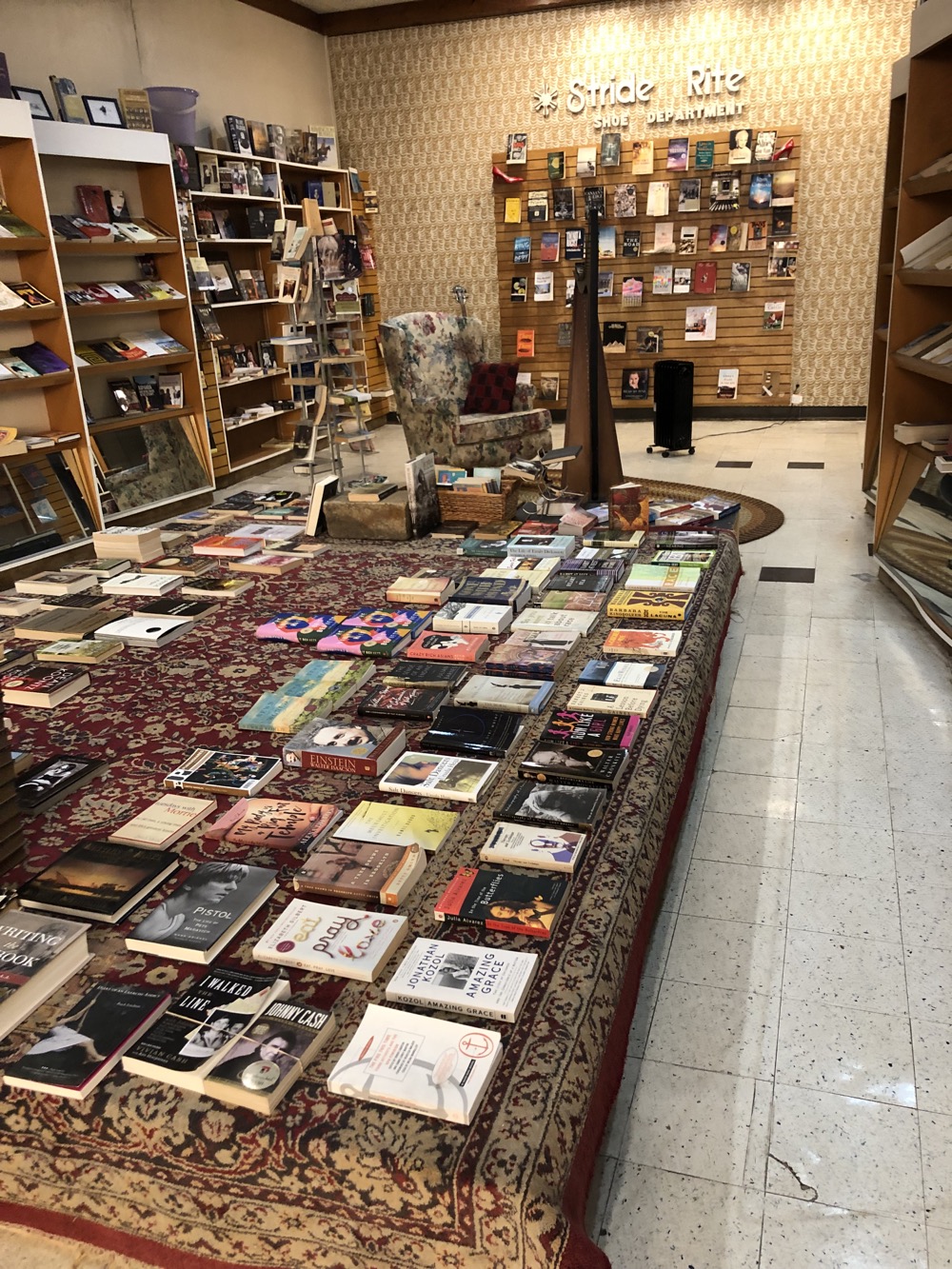 I poked and I poked. There is some semblance of order here and – holy cow it was freezing inside. I’d read about Noelke’s long-running issues with heating the place. For one, I’m sure it’s incredibly expensive to do so. For another, the city hookups and boiler were problematic. But the lack of heat was an issue for months.

My man John Noelke was just sitting in his chair reading. Winer cap, hot coffee, gloves, scarf. Just hanging out. I felt like I had to buy something. But… I just didn’t find anything I wanted. I can’t explain it. Some of the prices struck me as a bit higher than what I’d expect at such a store, but obviously still cheaper than buying new. 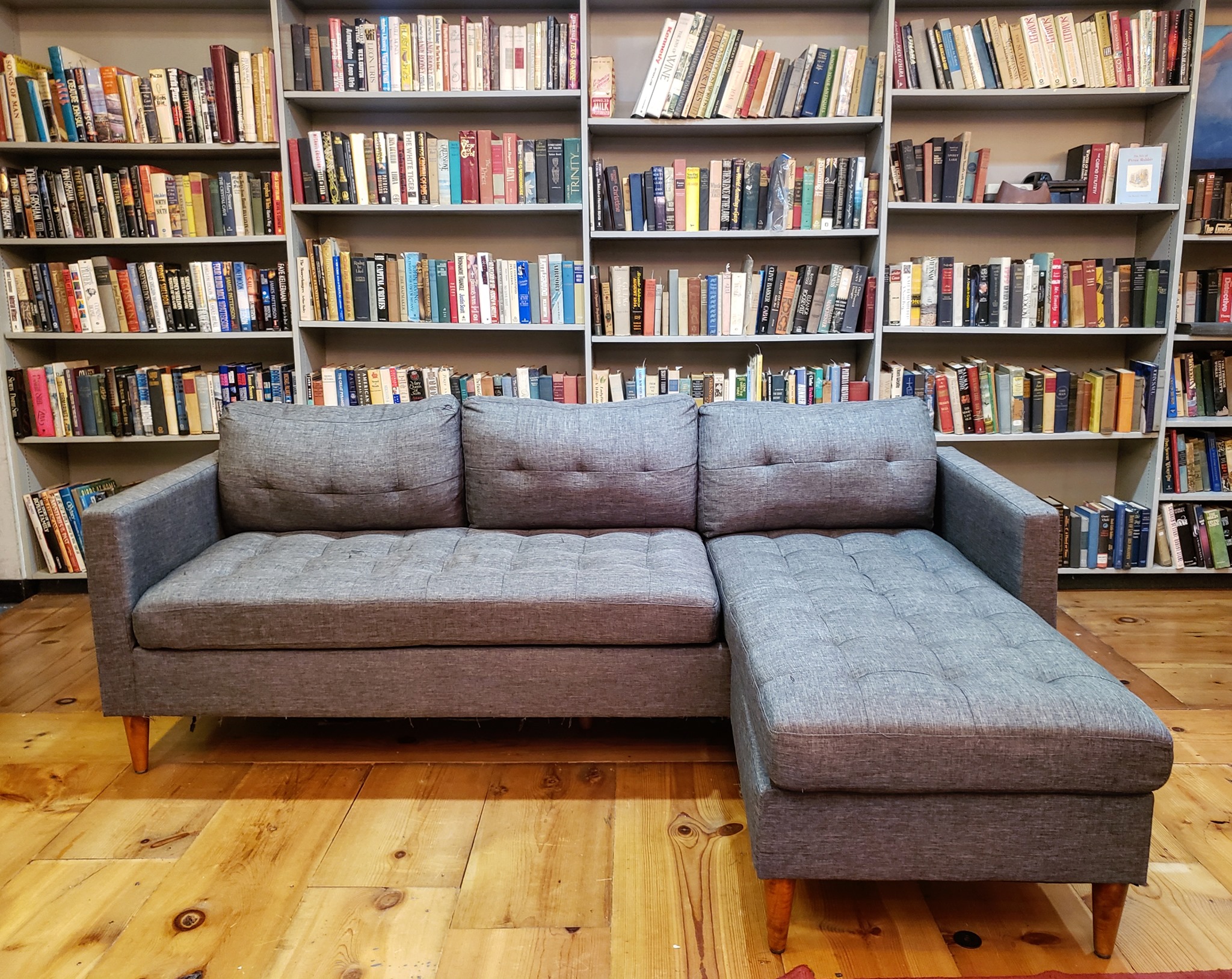 This picture is from Howard’s Facebook page. It looks really nice in this picture.

So I figured I’d regale the owner with some anecdotes as payment for his time and service. I said I was from New Hartford and I don’t know why. He said lots of New Hartford people have been patronizing his store. He then began asking me specifics about the fire in the center of “my” town and if I thought it was arson.

“Um. I don’t know, but boy did the town clean it up incredibly fast!” This is true, but my deflection didn’t work. I was confronted with questions about the town council and the building’s owner and… sigh. Why do I tell these dumb white lies? (I’ll tell you why – because saying West Hartford invites more questions, as it’s a bit of a haul from my house to here and why would I be here and… yeah.

I know, I know. There’s something wrong with me. I’ll try to do better. 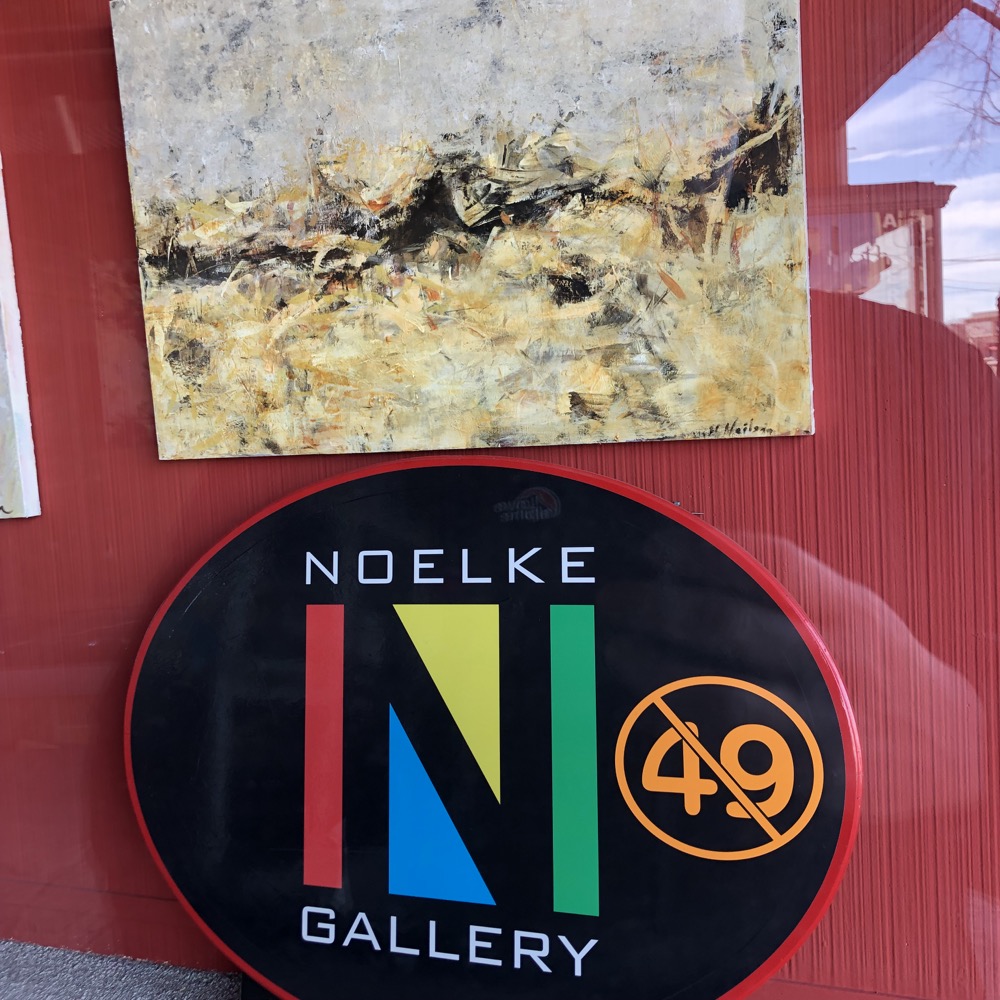 I originally had the Noelke Gallery on my list of Torrington museums. There was a standalone art gallery around the corner on Water Street in the past. I assume it was in the space now occupied by Five Points Gallery. The “Noelke Gallery” in the name of this bookstore seems to refer to two paintings in the display windows at the entrance.

But who knows. Noelke bought the whole building and there are two empty floors above the bookstore. Could one become an art gallery? Sure. Downtown Torrington is a mix of vacant beauty (Yankee Peddlar Inn), classic theaters (the Warner), and hip new eateries and coffee shops. I always pull for a post-industrial rebirth for the Torringtons of our state. 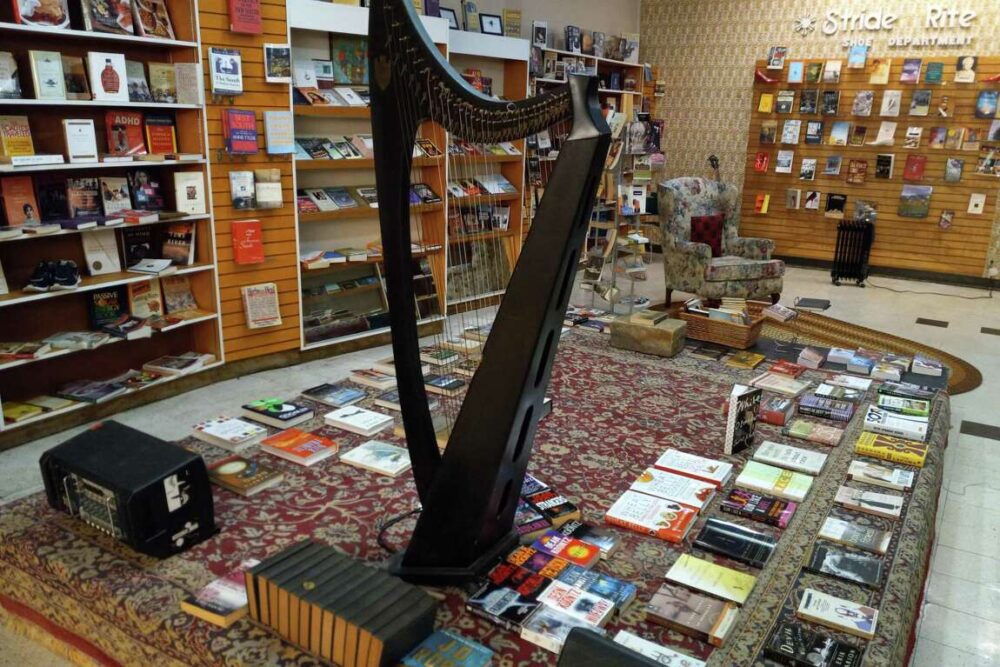 Noelke talked up an upcoming author’s talk and asked if I was a writer. I pretended that I’d come to the author’s talk or at least revisit and make purchases in short order. Let me be clear: I’m the idiot here. Mr. Noelke was welcoming, kind, funny, and clearly forgiving of idiots like me.

Patronize the man. Go buy books and other local crafts. Bring him a cup of coffee. Stay tuned for the growth of the store. And for the love of Pete, tell the truth about where you’re from. 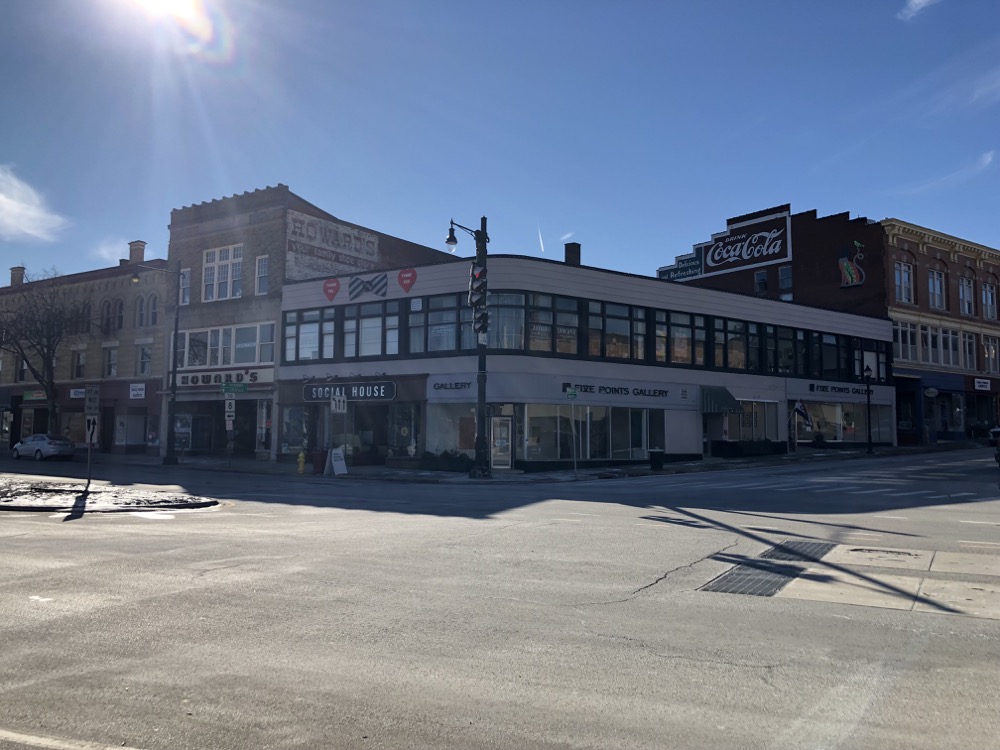