This is getting tricky. Hitting places “on a list,” which has become sort of a CTMQ household joke, to spice up the drives back up from visiting my family in Delaware is starting to become more difficult. For obvious reasons, each time we go to one place… it makes it one less “on a list.” Of course, repeating some of the ice cream stops would not upset any of the three of us. But until the list(s) narrow to such a point that there are no more practical stops in southern or western CT, we’ll keep experiencing new food experiences. 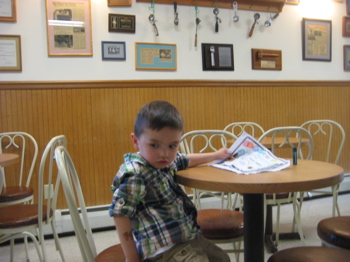 (By “practical” I mean that I don’t think expensive restaurants in Greenwich would be the best idea with a tired and road-weary Damian.)

And so, our latest jaunt back up from the deep south (so says Hoang) took us off of Route 8 to cut the corner with I-84 and a delicious stop at the Big Dipper in Prospect. I think this was my first visit to Prospect… And the prospects were looking good.

After all, how bad can said-to-be top-notch ice cream be? 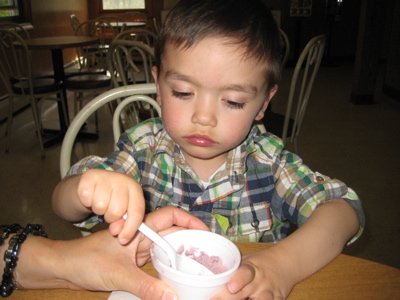 Two words to the wise: toasted almond. That’s the signature flavor of the Big Dipper Ice Cream Factory, and they sell nearly as much of it as vanilla or chocolate. Although it was originally inspired by the Good Humor “Toasted Almond” bar, it far surpasses its inspiration in creaminess (laced with delightfully sandy streaks of almond crunch) and vivid nut taste.

If this particular flavor is not your idea of heaven on earth, don’t worry. The Big Dipper has a few dozen others, ranging from silly (cotton candy) to swank (café Vienna, which is coffee and cinnamon) to serious (espresso). All are rich in butterfat (16%), but not so rich that they cloy. These are ice creams we can easily eat double and triple dips of, several times a week. The repertoire changes daily, but you always can count on toasted almond.

We would recommend this place if it was ugly and the staff was mean and nasty, but in fact it is an extraordinarily happy ice cream parlor, and getting to it along Route 69 is a summertime ritual for ice cream lovers from miles around. Once inside, you are served by a staff of local girls who frequently keep coming back to work at Big Dipper for many years, through high school and even into college, on vacations. They seem to love doing what they do. And why not? Ice cream – or at least the good feeling it generates among those who make, serve, and eat it – has got to be America’s greatest health tonic. 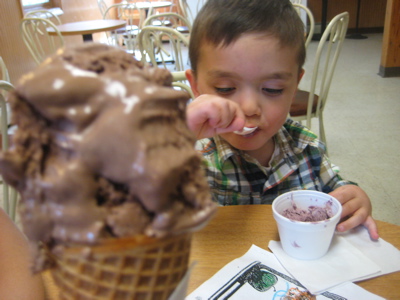 The Big Dipper is definitely a destination eatery. It stands alone along Route 69, up near Waterbury’s extreme southern border and is not pedestrian friendly to walk to. This is probably a good thing, judging from the Internet buzz – if it were more accessible, it might be impossible to get to the front of the line on a hot summer Saturday.

It’s housed in what appears to be a big old house, with ice cream miscellanea lining the walls. And where old scoopers don’t hang, there are about 40 articles praising the Big Dipper from the last 20 years or so. This place has history – and it has some serious fans. 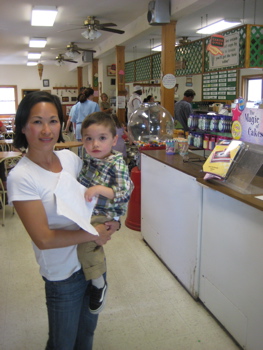 We were very fortunate to only have a couple people ahead of us as the poor dear behind the counter was all alone. To her credit, she was working as quickly as she could and retained a sense of calm even when the line later stretched 15 deep.

I opted for the Dutch chocolate and almond while Hoang had the toasted almond. Damian probably got some red fruit flavor, I forget. He’s not picky. I was a bit confused about their pricing scheme here, for you pay by the ounce rather than the pre-set size. That is, even though I ordered a one-scoop cone for us each, they got weighed and priced separately. I’m not sure the logic of that, or if I’m winning or losing in the equation, but whatever… let’s get to the good part. 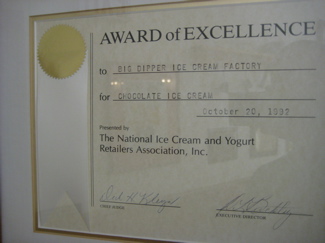 The ice cream is delicious. It is made on-premises and as Roadfood mentioned, it has the right amount of butterfat in it. I’ve had some ice cream as these boutiquey old-school joints before that seem to take pride in clogging your arteries with impossibly rich and gooey high-fat ice cream and it always seems a bit much to me.

My chocolate was chocolatey and there was no shortage of almonds. But Hoang’s toasted almond was perfect. I knew she was rather enjoying it as she sort of zoned out and didn’t say anything for a few minutes; not even to Damian as he plowed through his scoop in record time.

It wasn’t the best ice cream I’ve ever had, but it certainly deserves to be… yes, “on a list.” I have burned the location into my brain and I’m sure we’ll be stopping here again on a future Delaware to Connecticut trip home.

The best part? They are that rare ice-cream only joint open year round! 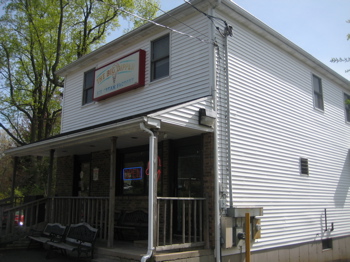