I first became aware of this little shop with a fascinating history when picking off places along the Connecticut Freedom Trail. Sure, the piece of the building’s history that qualifies it for that trail is interesting enough – but there’s much, much more. 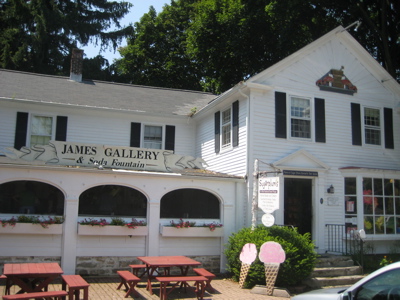 The next several paragraphs are from a website that no longer exists; former owners of the building I think. Oh well… enjoy! 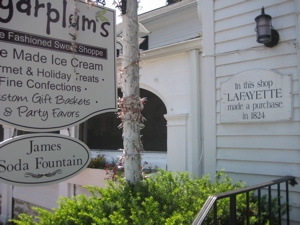 It is said that Marquis de Lafayette, friend of George Washington and Revolutionary War hero, stopped at the store in 1824, to make a purchase. It is local legend that the purchase was either a pair of socks or a bar of saddle soap. Katharine Hepburn also took a liking to the general store; she used to stop in to make telephone calls from the old oak phone booth.

The store was first located further down Main Street, adjacent to the tavern, until it was moved to the corner of Pennywise Lane in 1877, where it became a pharmacy. Peter Lane added the soda fountain portion of the pharmacy in 1896. When Peter was called away to fight in World War I, he left the care of what was then the Lane Pharmacy with his sister-in-law, Anna Louise James. 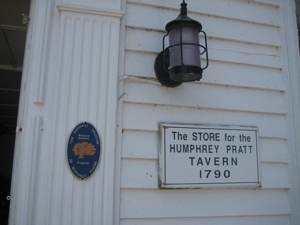 Miss James, as she was known to all, was born on January 19, 1886 in Hartford Connecticut. Her family later moved to Old Saybrook where she grew up. In 1908, Miss James was the first African American woman to graduate from the Brooklyn College of Pharmacy, thus making her the first female African American pharmacist in the state of Connecticut. Miss James ran the pharmacy from 1917 until 1967, and kept residence in the back apartment until her death in 1977. 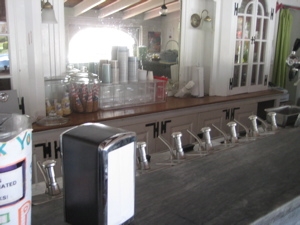 In the early 1990’s, the Pharmacy was in a commercial done by AT&T, as well as part of a documentary about Katharine Hepburn. Ann Lane Petry, Miss James’ niece and also a registered pharmacist, worked for Miss James and spent a lot of time at the pharmacy. Ann is better known for her writing skills and has published six books, some of which have won her both local and international fame, including The Drug Store Cat, based on her memories of the pharmacy when she was growing up and Country Place, a novel based on her experiences living in Old Saybrook. She is most well known for her novel The Street, a Houghton Mifflin Literary Fellowship book. All of Ann’s publications are on display in the gallery area of the pharmacy. Today we try to bring history alive by displaying original artifacts from the pharmacy and serving old-fashioned favorites from the historic soda fountain as well as gourmet coffees. 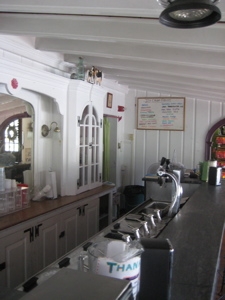 Wow. I wonder how many people stop in for an ice cream cone and have absolutely no idea about any of that stuff. Well, there is a sign out front declaring “Lafayette bought something here” – which is pretty funny to me. With all the “Washington Slept Here’s” dotting the state, a “Lafayette bought socks here” is somehow more interesting to me.

Hoang enjoyed an old fashioned milkshake; actually, Damian downed half of it – and I just a cup of chocolate raspberry truffle. The parlor room was stiflingly hot, but that only added to the authenticity.