At the risk of making this page more confusing than it needs to be, I’ll try to explain what’s going on here as succinctly as possible. Joshua’s Trust owns a parcel of land called the Utley Hill Preserve that protects the Columbia Lake watershed. The town of Columbia owns the land surrounding the Utley Hill Preserve, which includes the town’s Recreation Park. There is a trail network that takes hikers through both seamlessly. 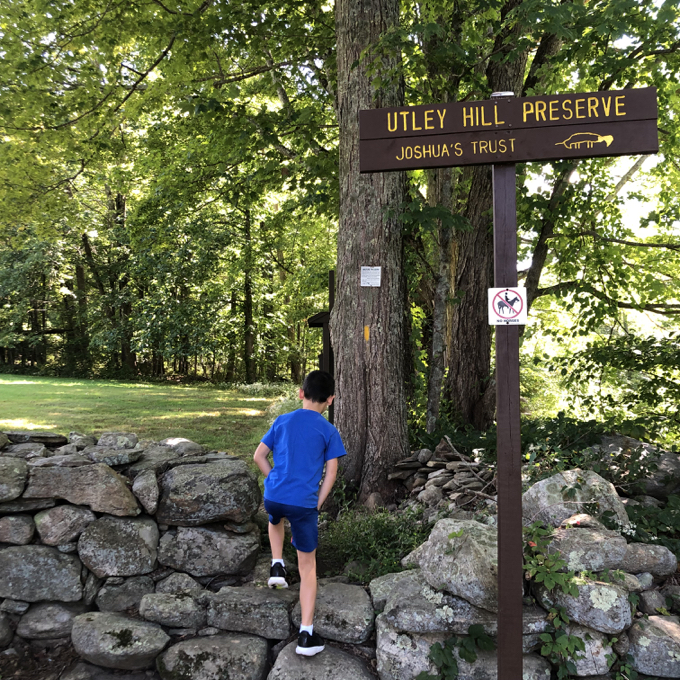 And I will try to do the same. Unfortunately, I can’t be entirely seamless because Calvin and I had to split our hikes here over a few months. In July, we knocked out the eastern side of the property and in September, we returned to the western side to finish the job.

It was hot. It was muggy. But most of all, it was buggy. But Calvin and I had quickly completed a hike over at Potter Meadow, also in Columbia, and had no real issues. We parked at the far end of Recreation Park near the Recreation Park Connector Trail. 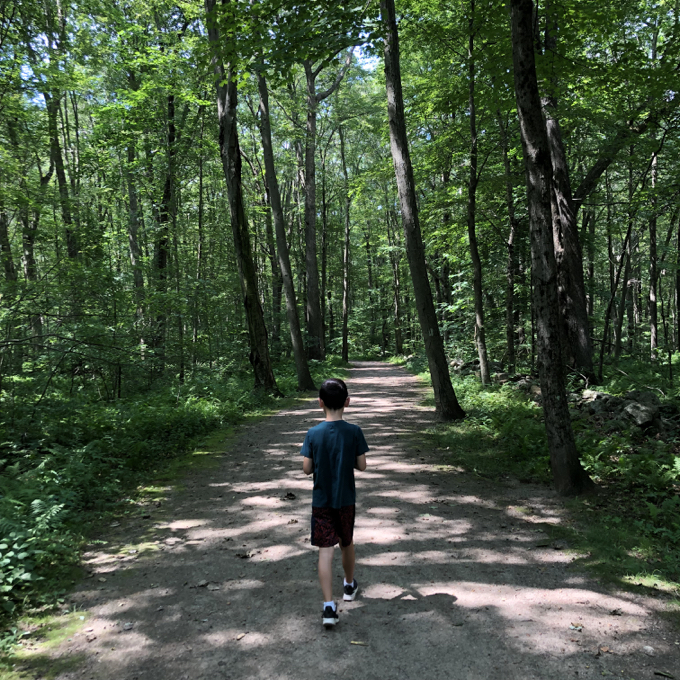 We began down the wide, easy path and the bugs appeared. Swarms of them. Still within sight of the car, Calvin began complaining about them. Gnats, no-see-ums, deer flies, mosquitos… it was rather unreal.

The loop trails here all more or less lead to Utley Swamp, which is of course a breeding ground for such insects. We pressed onward onto the Utley Yellow Trail which mean we’d crossed over into Joshua’s Trust territory. I was at a bit of a crossroads here; should we continue on torturing my 8-year-old, or give up for the day? 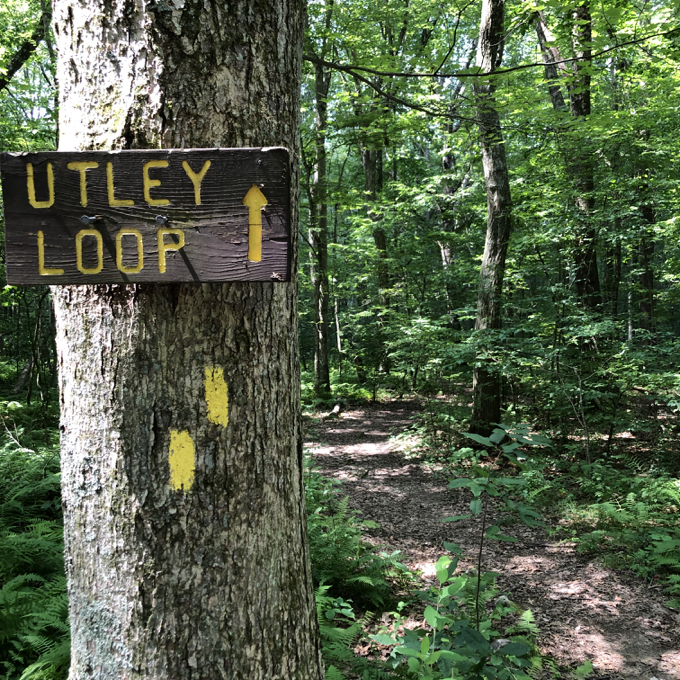 I decided to press onward. It would be tough, but it would also be a challenge. Could he maintain his sanity while thousands of tiny insects tried to find refuge in his ears? While others got stuck in his young eyes? And would he appreciate that every one in his mouth was one less that could bite him?

And would I be able to maintain my sanity through 45-minutes of whining? As we crested a hill on the Yellow Trail and headed towards a downhill section, Calvin tried the strategy of running full bore down the trail to lose the bugs. Which worked until he got tired. Good one, kid. 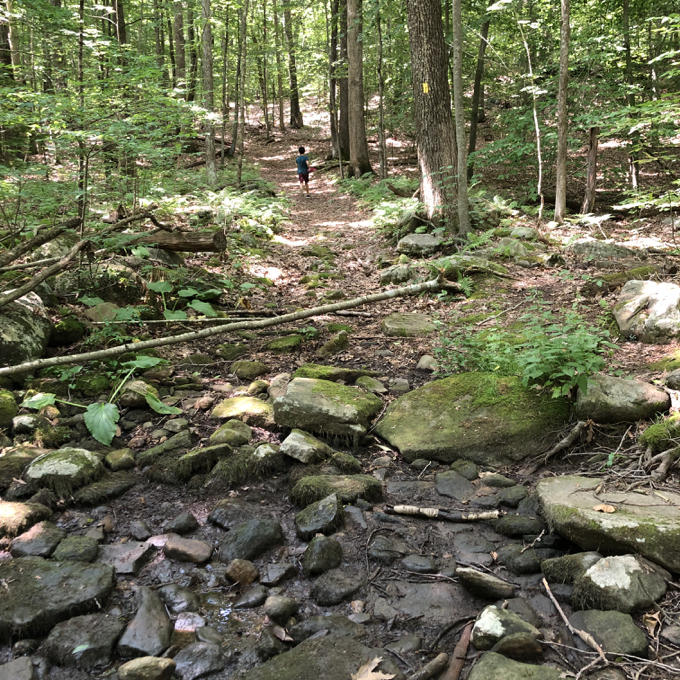 Once at the bottom of the hill, the trail parallels Utley Brook. This is the stream that feeds the popular Columbia Lake and it has quite a history. As we swatted and smacked our way up the trail, I peered down at what seemed like an endless series of old dams, foundations, and mill sites.

“Hm,” I thought, “that all looks pretty cool and I’d love to check it all out up close!” But then I watched my baby child nearly in tears with a dark cloud of insects enveloping his head. I chose not to inspect the ruins or the trails on the other side of the brook. I was excited to break the news to Calvin… 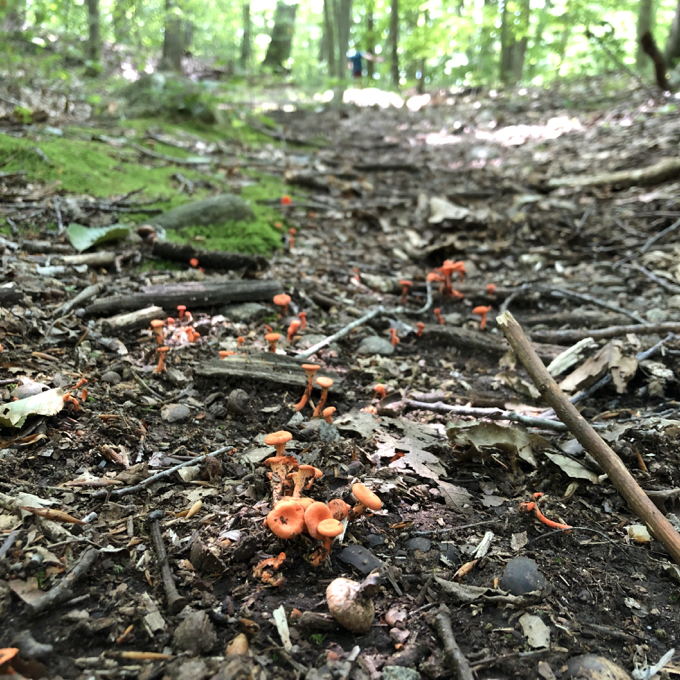 “Hey buddy, we’re going to cut this hike short and not explore the other side of the brook!”

“Good. How much further? Eww, just ate some more bugs.” 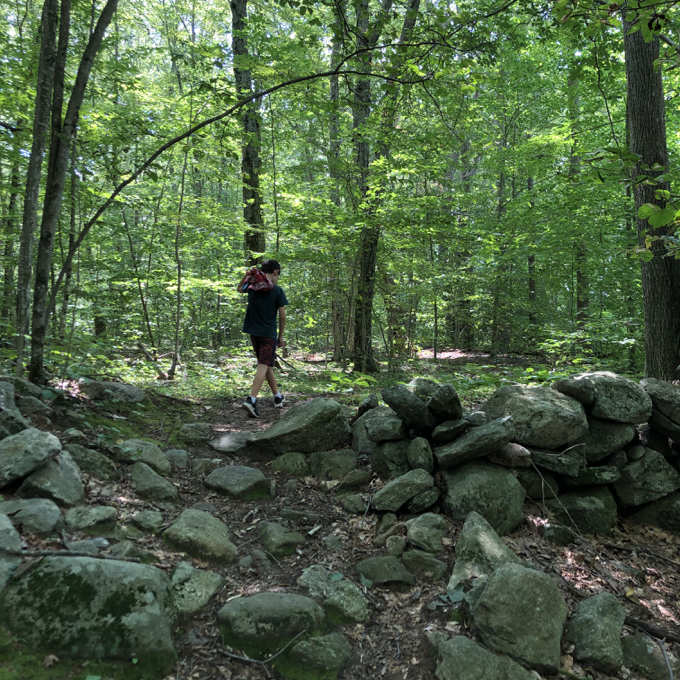 The woods here are very pretty. The usual oaks, maples, hickories, beeches and ashes – I’m sure this place is lovely in the fall. We passed the bridge to crossover to the western side of the property and I still paused for a moment. Here we were, in Columbia, in the middle of the woods. We should just suck it up and hike everything.

I turned to Calvin who had continued on the Yellow Trail, swinging a bandana over his head now in an effort to stymie the attacks. I followed him without a word. 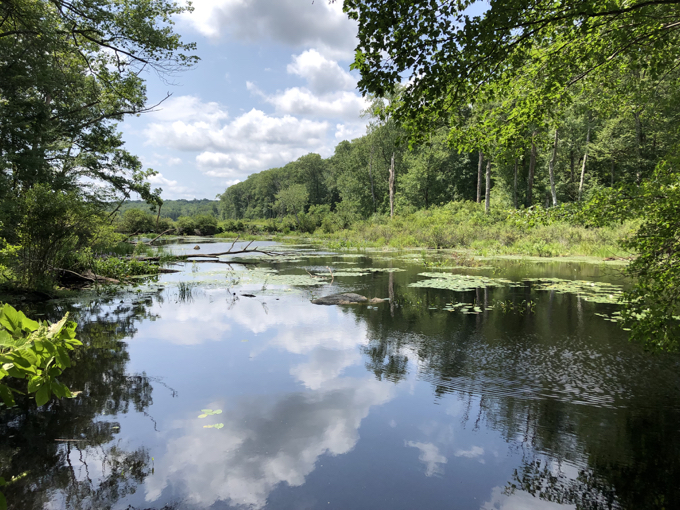 Followed him to the next decision point. A Blue spur trail takes hikers through a wetlands area, paralleling the swamp. It would add ten minutes or so to our torture, but Calvin wouldn’t know that we didn’t really have to do it. So we did it.

I mean, even though we were now walking through wetlands closer to the swamp, could the bugs get any worse? (Yes. Yes they could.) Holy cow, this was the first time at was near my wits end since a hike among the infamous black flies of Maine. Shout out to Utley Hill Preserve in Columbia for providing me with the absolute worst bug experience of my long and storied Connecticut hiking career. The sheer volume of them was simply amazing. 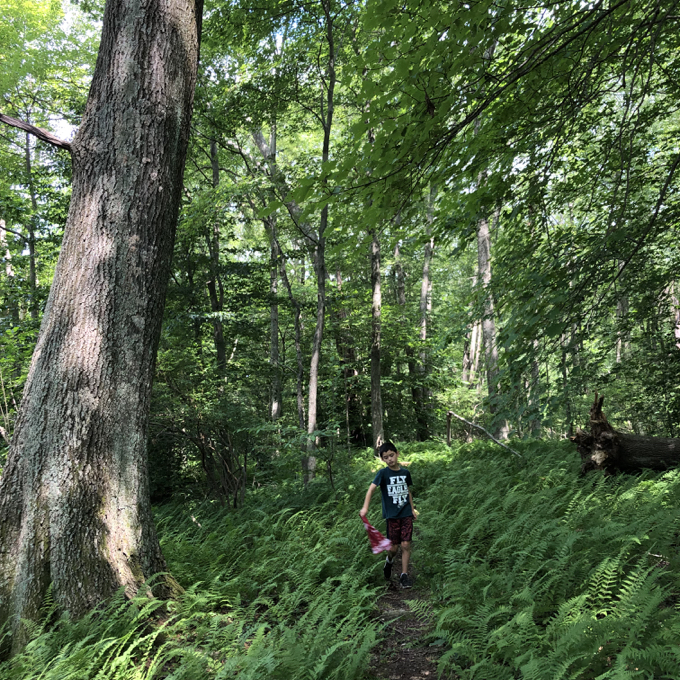 And shout out to Calvin for battling through. (He didn’t have a choice, but still…) Once the Blue Trail did a 180-degree turn I could honestly tell him that we were now headed back towards the car. Of course, in so doing, I swallowed ten more bugs. This was insane.

I just wanted to run the rest of the way. I thought that Calvin would want to do the same, but he was shutting down. It was too much for him. At one point, he almost stopped and broke down. He’s a tough kid, but this was really a test. I calmly explained that standing still was doing him no favors and to keep moving. 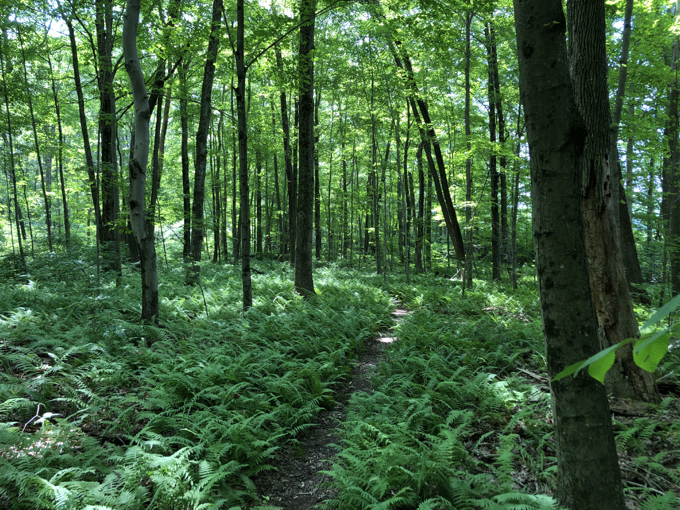 He kept moving. Back to the Yellow loop and then to the other connector trail and we were shortly out of the woods and onto the mowed grass of the Recreation Park. A mother was pushing her child on a swing and a friendly dog approached us. The bugs were gone. We probably looked like we’d both fallen into a lake, as we were drenched in sweat. We looked angry and beaten by an easy walk of about two miles.

Calvin did great considering the adverse conditions, and I was proud of him. And no, I didn’t remind him that we were only halfway done with this property either. I’m dumb, but I’m not that dumb. 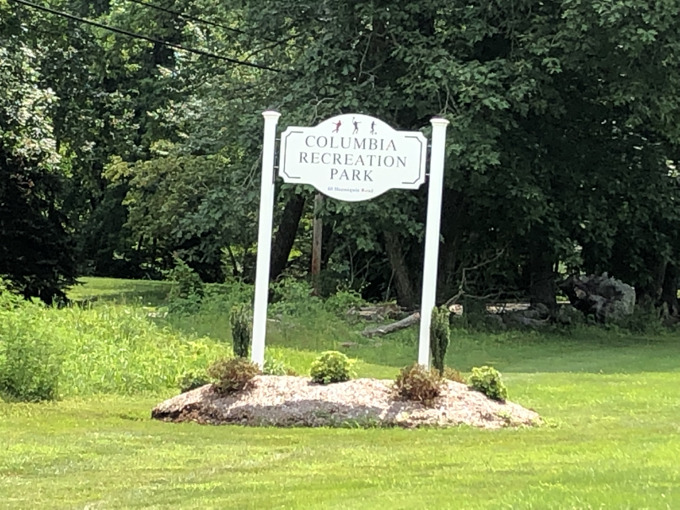 Ding Dong The Itch is Dead! Yes, a few months later we returned to conquer Utley Hill Preserve once and for all. With cooler, breezier weather we would be free and clear of the pestilence that greeted us last time out here. I found the small parking area on Lake Road in an effort to focus on the trails west of Utley Brook.

In so doing, we passed the little beach area at Columbia Lake and wow, it really is a nice little spot. There are a bunch of these lakes in this part of the state, and they are far nicer than uppity city slickers would believe. 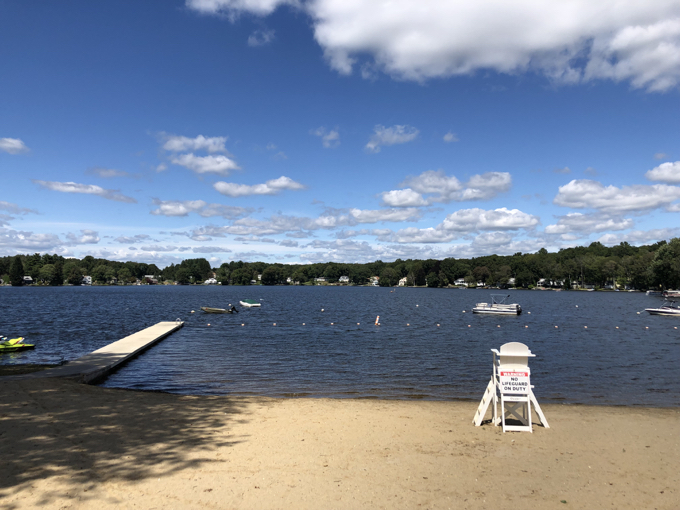 But we were going into the woods, not the water. The access trail to the property winds around some rocks and walls, along a boardwalk, and skirts the back yard of someone’s property before offering hikers a choice. Head down and across the brook or go straight and into the Recreation Park. Obviously, we chose to head over to unexplored areas, but not before my son got a lesson in idiocy. 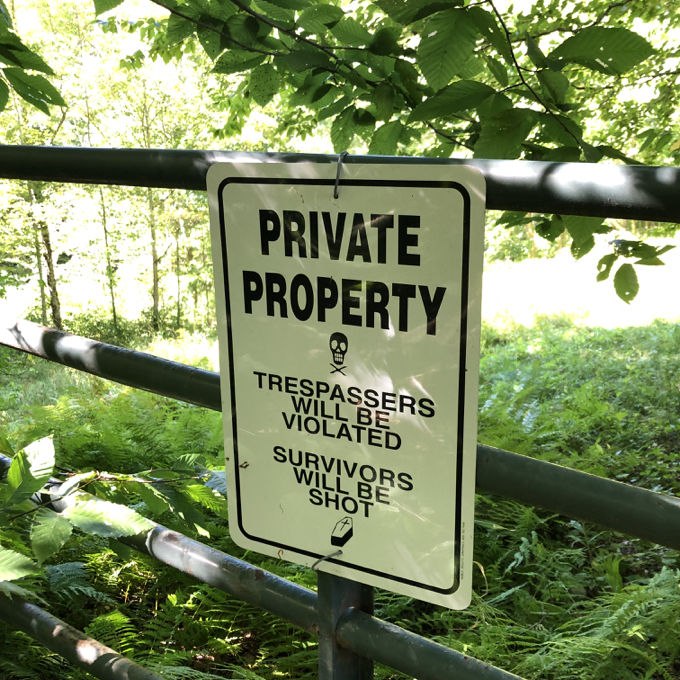 The property behind the gate was an overgrown patch of field and woods. Not exactly inviting, even if the sign and gate didn’t exist. But there I was, trying to explain to a little kid that the sign is… jokey? I hope?

“But why would they put that sign there? Would we really be shot dead if we crossed over the fence?” 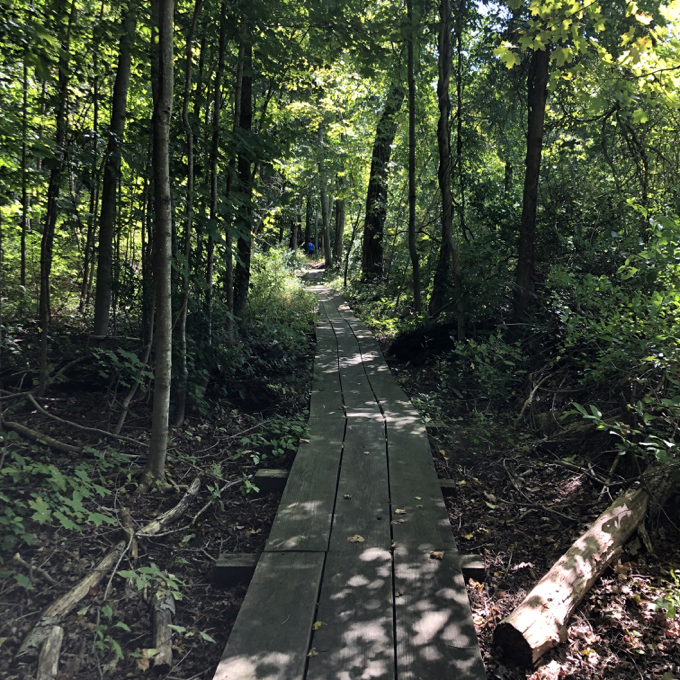 Granted, he forgot all about the sign in short order, but you know, if you’re the type of person who either a) thinks this is funny and/or b) would murder someone who walks through your apparently abandoned property, rethink your life. 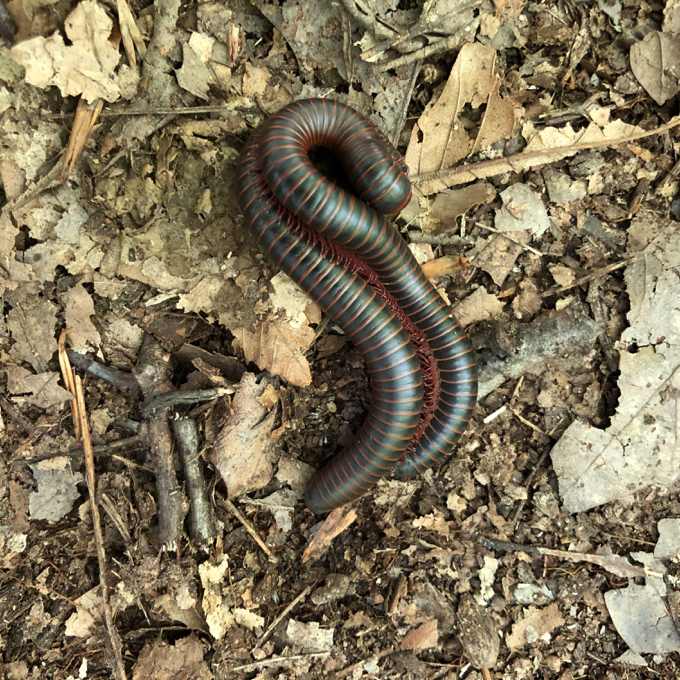 There’s a white loop trail over here that goes up a hill. What the heck, let’s call it Utley Hill. There are some fern glades and supposedly evidence of an old quarry, but we didn’t see anything. That might have been because Calvin was pretty eager to get back down to the brook and to explore the ruins of the dams and flumes and such. 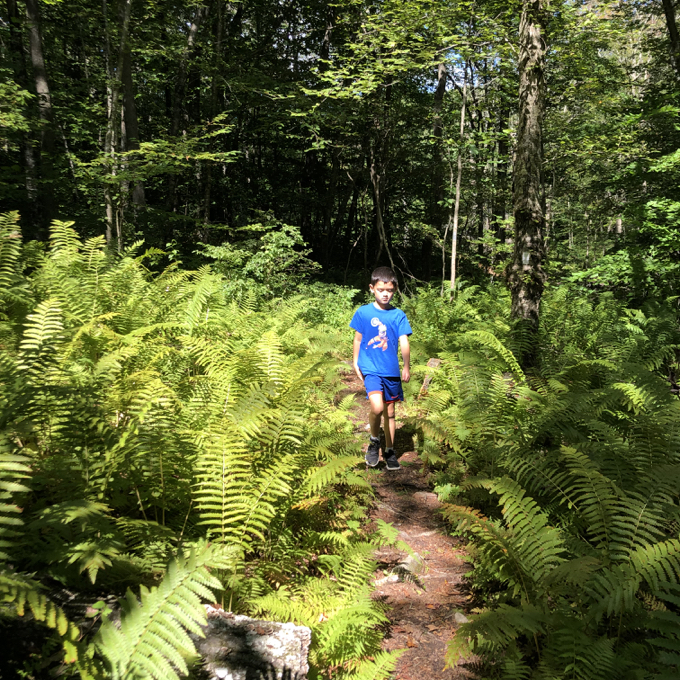 Not so fast, kiddo. We had an out and back spur trail to check out Utley Swamp! What more could a boy ask for? We made quick work of the side trail, took a picture, and headed back to the brook. Peter Marteka wrote about this hike some years ago thusly:

Traveling along the banks of Columbia Lake Brook within the Utley Hill Preserve goes something like this: dam, mill foundation, dam, sluiceway, dam, foundation. And while the historical value of the 118-acre preserve is astounding, the natural beauty of the area is equally breathtaking.

The highlight of the hike is exploring the abandoned foundations. According to local histories, there once was a piano and hat factory, a grist mill, shingle mill, cider mill and sorghum mill on the banks of the river. A furniture factory was farther downstream.

There are several more foundations upstream, including a set that once held an unusual wooden flume. Several columns stand on a large stone wall where the flume once sat. The white-blazed path continues to a town-owned parcel on Utley Hill. There are several outcroppings where rocks have been chiseled out to provide blocks to finish off the top of the stone wall surrounding the nearby Utley Hill Cemetery.

Wait, there’s an Utley Cemetery too? No idea who the Utleys are, but I’m beginning to wonder why Columbia isn’t called Utley. 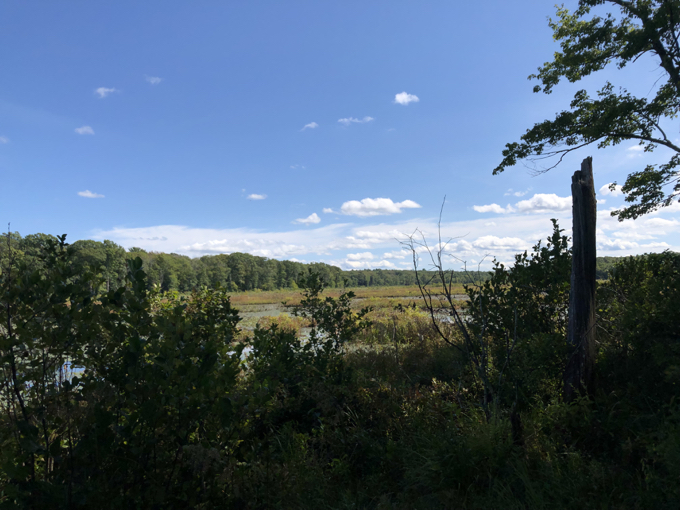 Marteka is right, of course. The highlight of the Utley Hill Preserve and the town’s protected land around it is the brook and all the ruins of its industrial past. It’s hard to distinguish dams from mills from whatever else was here, but it really doesn’t matter. It was fun for Calvin to imagine what this area was like one-hundred years ago. 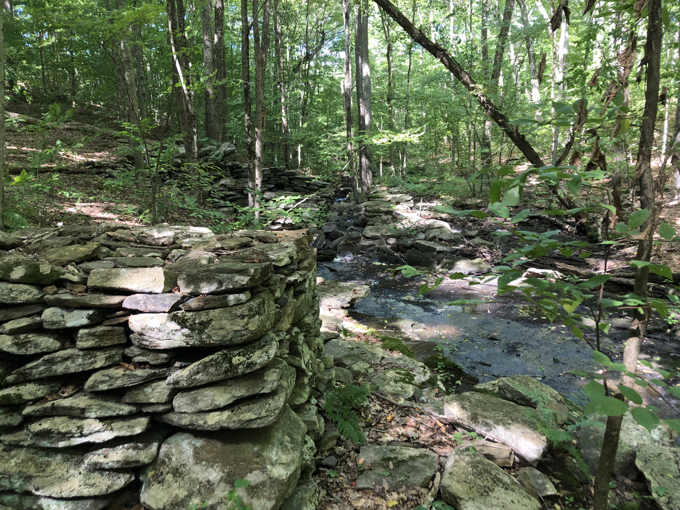 It was also fun for him to test my patience with his threats of jumping from here to there, which surely would have resulted in broken ankles and whatnot. Fortunately, discretion prevailed and he took much safer routes from the tops of the structures to the bottoms. 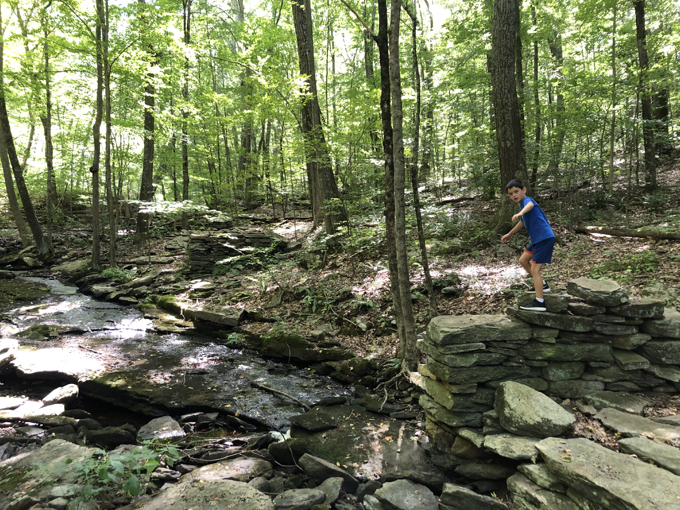 We tooled around in the brook, preferring to work our way down it rather than the trail just up the small ravine. We found frogs and salamanders and non-biting insects that fascinated Calvin. This is what hiking with a child is all about – exploration and discovery and making up fanciful stories about past industry that clearly operated here. 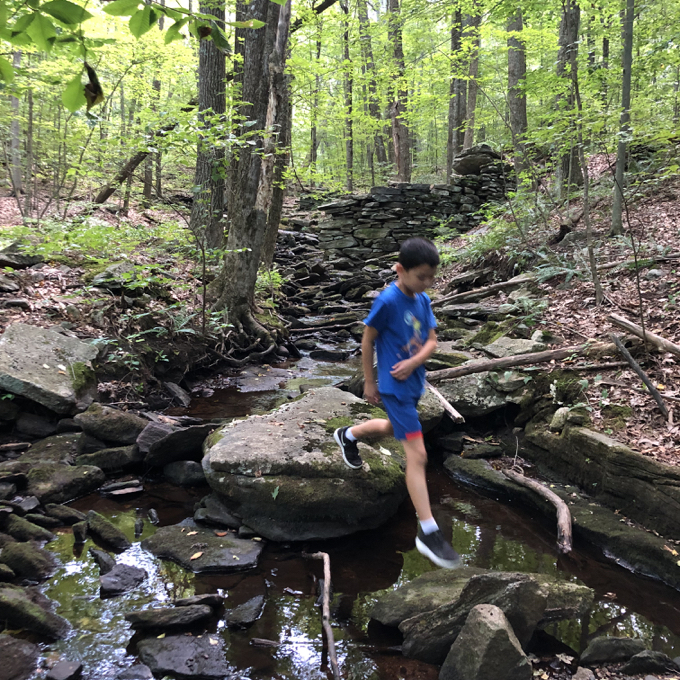 After a while we climbed up back to the trail and made our way back out to Lake Road and our car.

Utley Preserve is yet another hidden gem in a spot few would think to explore. But you should. 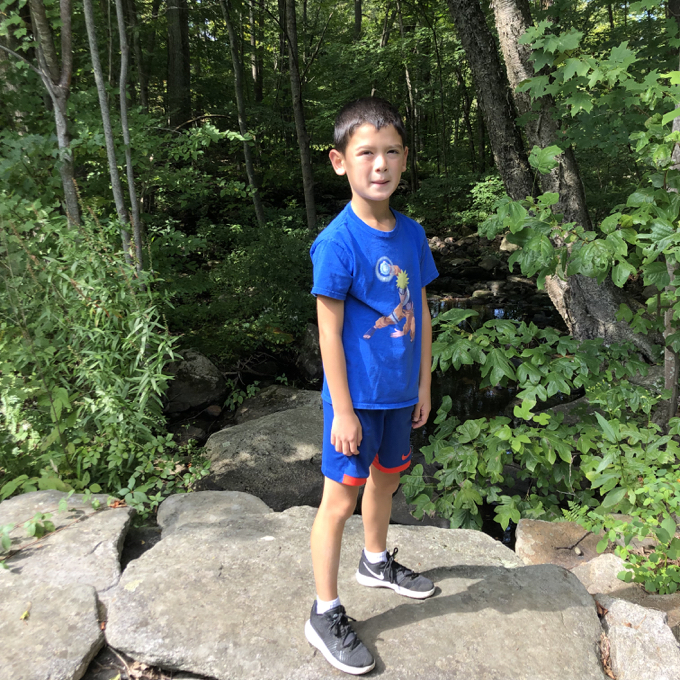