Kent Falls is the rare Connecticut brewery that has warranted three major updates from me on this website. For whatever reason, I wrote about them back when they first became operational. No one could visit the brewery then (2015-16) but I felt that what they were attempting to do at the time deserved my attention. Here’s a bit of what I originally wrote back then. 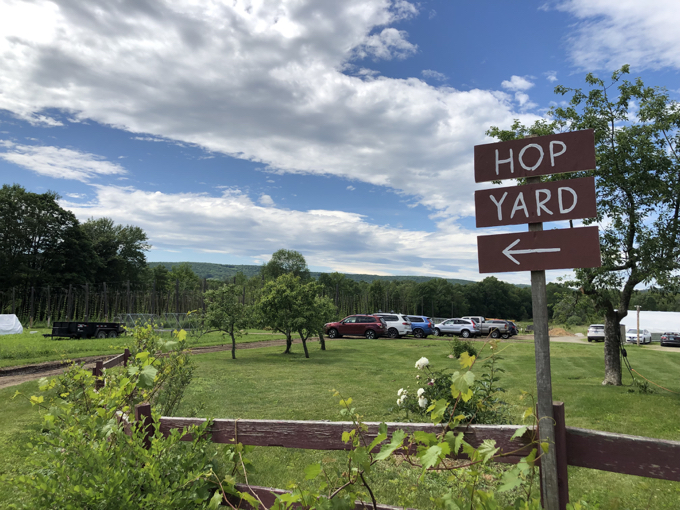 …And Kent Falls, a total hippie commune earth-friendly ethically sound brewery that can’t be visited due to licensing that makes a very focused line of styles of beer. That’s right, you can’t visit Kent Falls. Now, this may change at some point; a point at which I’ll be annoyed because I’ll have to change the title on this page. (But yeah, okay, my joy at getting visit the place will overcome any annoying I may or may not feel.) 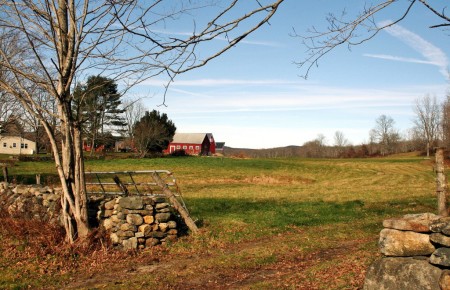 …Kent Falls has been in the works for what seems like forever. In reality, I think I first heard about them maybe two years before today, March 11, 2015 – the day they first appeared on a tap line (in Litchfield) and available to drink. One hired head-brewer guy they brought on bailed out during the start-up process. We heard all sorts of stories of the town being prudish and difficult as well as their big plans. We heard about the noble efforts to source as many ingredients locally as possible. Barley from Massachusetts and farm-grown local hops… stuff like that.

I won’t burden you with all of their sustainable practices – which I love, by the way. And they do a very good job making this stuff interesting on their site. Here’s some info about them and their land and a bit about their sustainability practices.

…As it is, I probably won’t meet these guys for a long time, but I know I’ll like them. 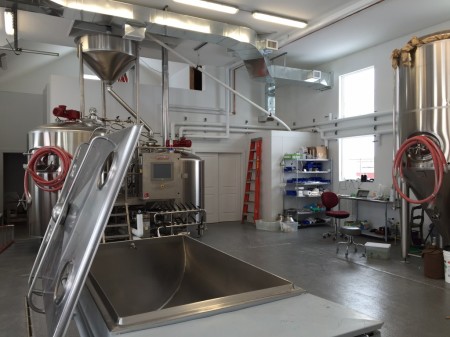 This next bit takes excerpts of what I wrote in June 2016 when the brewery announced that we’d be able to purchase bottles at the brewery and a nearby farmer’s market.

…At this moment I’m in a plane somewhere over the Carolinas on a flight back from several days in Orlando for business. As I sat in the terminal waiting to board, Kent Falls announced that they would open to the public for the first time very soon. 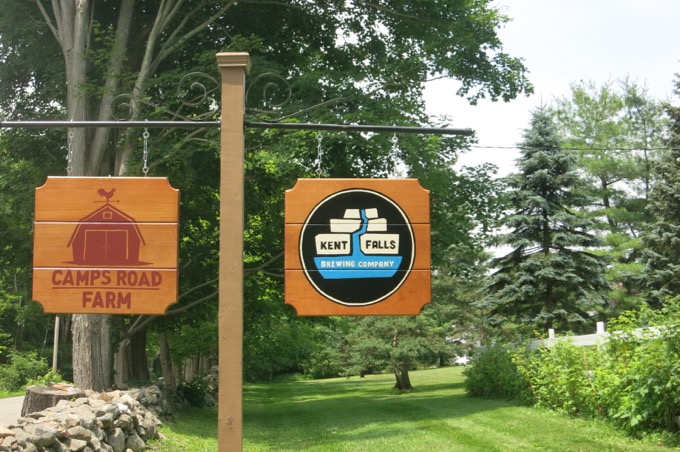 And the CTBeerInternet went berserker. I did my duty for a couple months earlier in the year, replying over and over and over on Reddit and Twitter and facebook that Kent Falls will assuredly NOT have a taproom, definitely WON’T be giving samples, and absolutely WILL NOT be providing growler fills – when they first open in June 2016. No one processed it. Like, I would politely tell someone this information and then the next comment would be, “OMG, GROWLER FILLS FOR DAYZZZZZ! CAN’T WAIT!” or whatever. 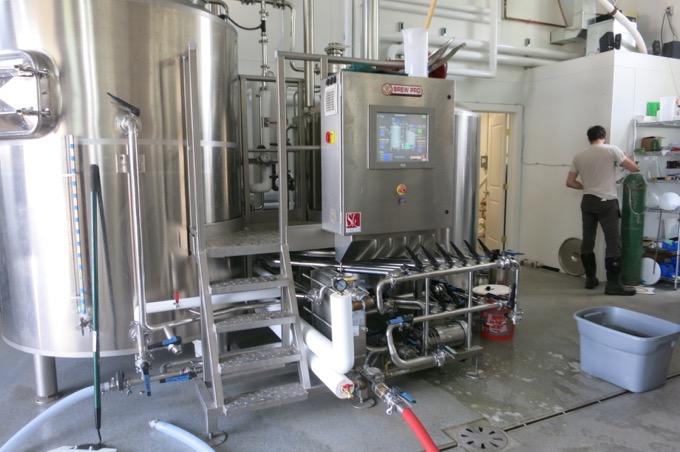 Kent Falls is a SMALL operation. When you visit, you will be amazed.

…Kent Falls Brewing Company is located on a very tiny road on a very real farm. The brewing equipment is in a barn.

An honest-to-goodness barn. Owner/All Around Mr. Kent Falls Brewing Barry lives at the farm. So does head brewer Derek. So do others. Their living quarters are not pretty or fancy. I’ve used their bathroom. It is not a luxurious bathroom. These guys really do “live the life.” Their website pictures of tattered t-shirts and muck boots are real. Trust me. 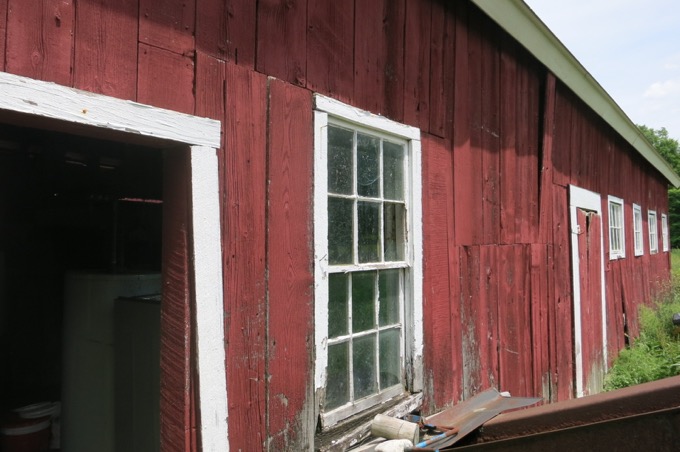 The old barn is raggedy homey

…The farm itself is pretty rad. They’ve been growing hops for a few years now. There is a separately licensed chicken farm here – Camps Road Farm. When you go to the brewery, you can also buy chicken meat. Pigs bumble about.

There is an orchard on the Camps Road property as well, and its harvest is used by Neversink Spirits just over the border in New York. Neversink actually distills their booze themselves, as opposed to many other “local” distilleries who pretend that they do. 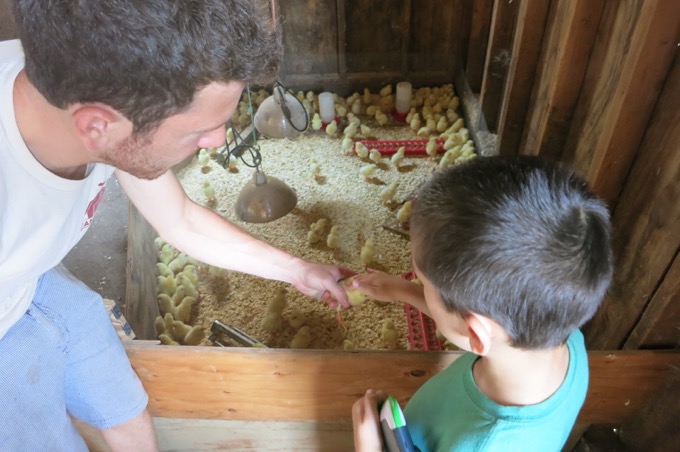 My son petting some future food.

They convinced the town of Kent – Kent! – that this will all work. Thus far, it has. Let’s keep it going… and growing. Respect the neighbors. Please. Do you people know how hard it was to get the town of Kent on board with this stuff?!

…They’ve put out about 55 beers in a year and a half. I’ve enjoyed about 53 of them at this point. 50 of those 53 are excellent. A dozen or so are world-class. Kent Falls vaulted into my top five Connecticut breweries almost immediately.

Their production volume is almost unbelievable. They seem to be doing more beer dinners. Go to them. They’ve collaborated with Grimm, Burial, Bacchus… Their inventiveness is unparalleled. Currently, they use a repurposed industrial salad dressing vat to brew some of their beers. They make saisons and grissettes and wilds and bottle a new one every couple of weeks it seems. 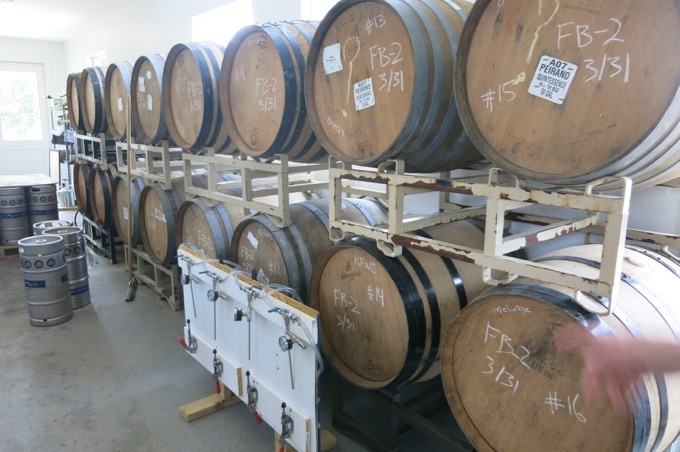 …Then they break down and replace all the equipment to do their endless line-up of hilariously named “clean” IPA’s with different hoses and nozzles and stuff. They will probably end up bottling a few of those beers at some point but who knows when. Their line-up of non-Brett IPA’s are simply fantastic… all the flavor of those sludgy, opaque “New England IPA’s” with none of the dead yeast and trub.

Barry is active in the local legal scene. Whether its regarding farm breweries (bill was killed by Barry himself, I think), or getting the state to allow higher volume sales at breweries. This arcane law will be fought by the big box package stores (who are close with Governor Malloy), so good luck on that. 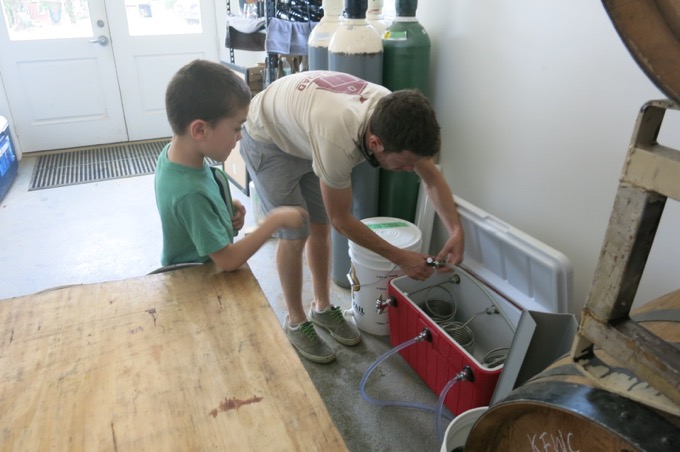 And themselves, of course. That’s just capitalism.

And I love what the future holds for these guys.

Enjoy Kent Falls, y’all. And be happy and proud they operate out of one of our state’s most beautiful towns. 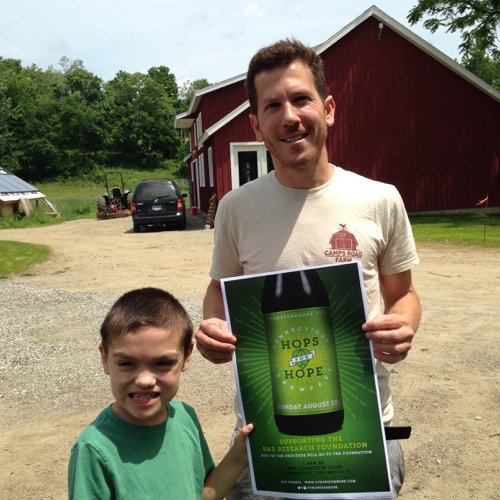 Kent Falls rules for many reasons. This is but one.

Many Connecticut breweries have gone through major changes over the last four years, so Kent Falls is not alone in this. But to me, not all deserve a sort of “re-do” like I’m writing here. Kent Falls has gone through a sea change in their half a decade: from tiny Belgian(ish) focused distribution only farm outpost to respected brewery with farm tours and onsite purchases to full-blown comfortable, fun, and delicious brewery experience. One man has seen the brewery through its growth and expansion: Barry Labenz. Now, it bears mentioning that Barry and I have become friends over the years, but we’re good enough friends that he values my insight and input – even when something isn’t working so well. Above, in 2016 I wrote:

Barry lives at the farm. So does Derek. So do others. Their living quarters are not pretty or fancy. I’ve used their bathroom. It is not a luxurious bathroom. 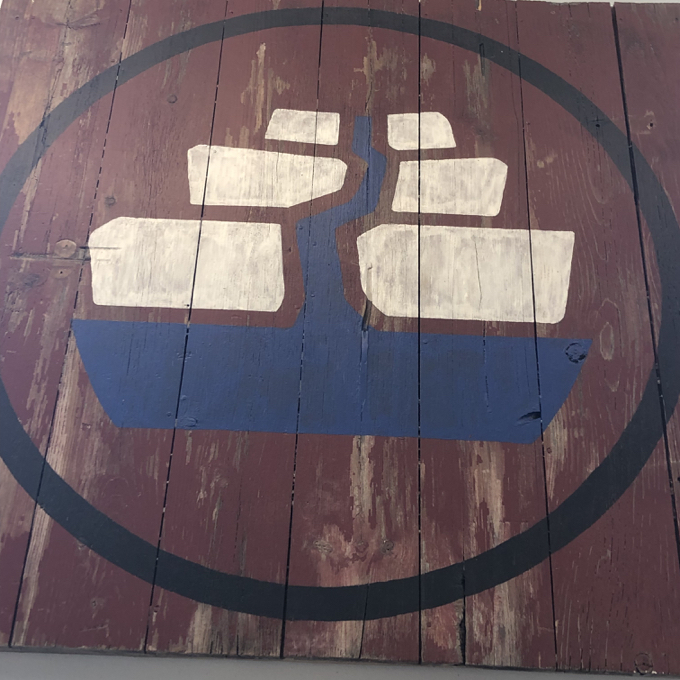 Barry no longer lives at the farm. Derek Dellinger has left his post as head brewer. The brewery now has an ADA compliant, clean, and perfectly clean and modern bathroom. But there have been many more changes out on Camp Farm Road.

I’ve had the somewhat unique good fortune of visiting Kent Falls many times over its various incarnations. I tended to visit during off hours because, well, because I could and because I found myself in the hinterlands of Kent at odd times. 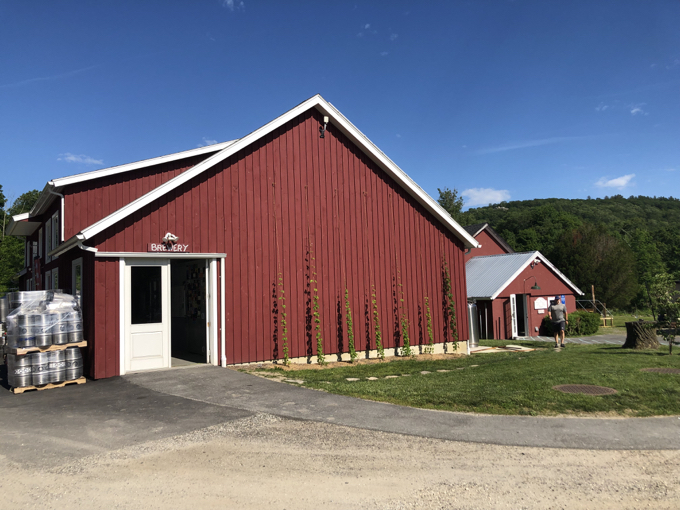 I also have had the good fortune of living in West Hartford, home of a couple beer shops that get every distributed Kent Falls beer. For years, I’d buy literally ever bottle that came out – and there have been a ton of them. Well over a hundred from 2016-2018 when I stopped chasing them down. My collection of photos for reviews (that, again, I’ve since retired) of Kent Falls beers is extensive. So. Many. Good and inventive beers. 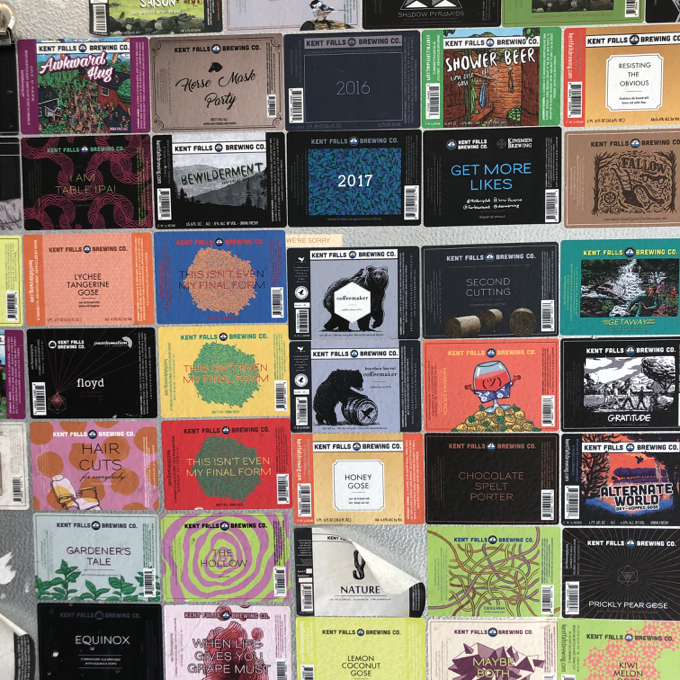 I’d encourage you to check out the full listing of Kent Falls beers (get comfortable). Not only do many have fun names, not only are almost all of them fantastic, many of the labels straight up awesome. Despite the wildly different styles of the labels (there is a rhythm and classification to them to a degree), they’ve all been done by one man: Dan Hamilton.

There’s just no point in trying to capture them all. But here are a few: 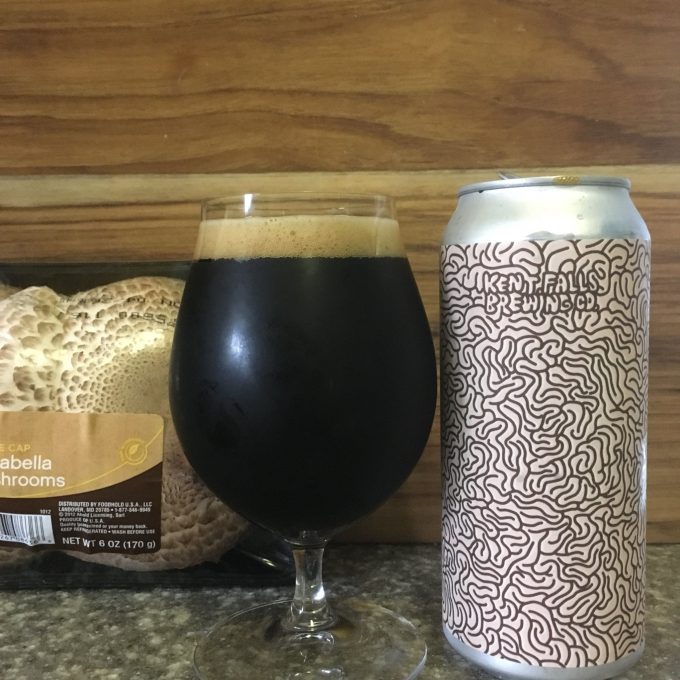 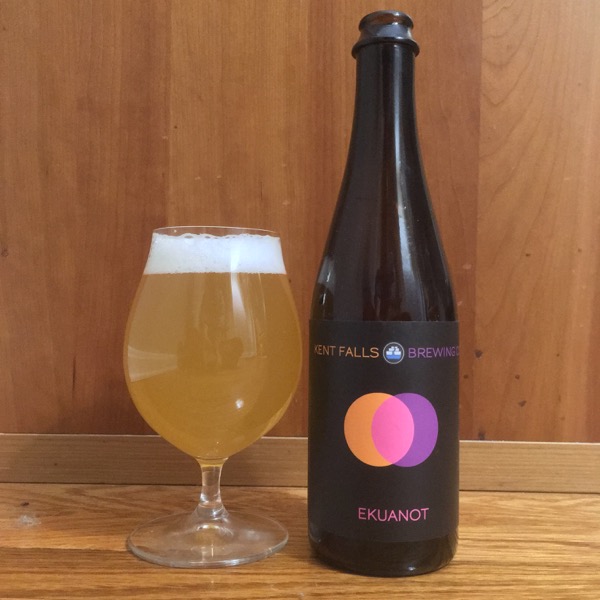 5. Walking Away In Slow Motion As the Car Explodes Behind You
4. The Hollow
3. Super Sparkle
2. Lime Zest Gose
1. Alternate World 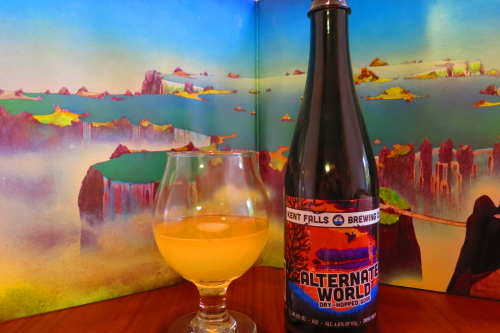 It goes on and on and on. And the crazy part? The vast majority of them were really good. Sometime in the 2017-18 timeframe, Kent Falls began moving into the more popular styles of beer while still releasing, promoting, and crafting what they love most: saisons, wilds, grisettes, sours, and the like.

The beers have never been cheap – and I’ve generally been fine with that. Kent Falls was providing decent health insurance for its employees back before most others. They pay a premium for locally grown grains. They often give a dollar a beer to organizations I support (pssst, generally “liberal” non-profits, if you care.) Paying an extra couple of bucks to support their mission has always been okay in my book. 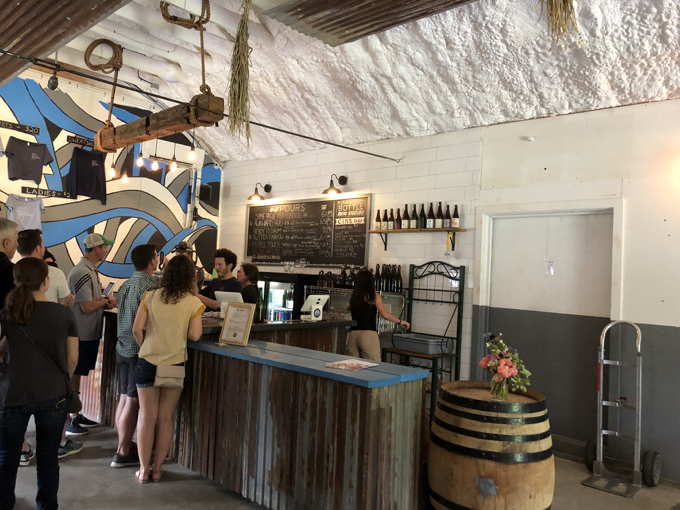 This high-endness carries over to their distribution imprint. I’m not sure any other Connecticut brewery has been lined up alongside Cantillion and BFM at Tørst in Brooklyn or Blue Hill At Stone Barns in Tarrytown. I realize that the donations to Planned Parenthood and the ACLU and being on tap at frou-frou overpriced New York restaurants will turn some people off to Kent Farms. I don’t care and neither do they.

Barry is a principled man. He’s been active in Connecticut politics since he moved here and dreamed of what Kent Falls could be. As legislation has progressed to allow for beer to be sold at farmer’s markets, higher volumes to be sold at breweries, and the passage of the farm brewery bill… Barry has been there. He is opinionated, funny, hardworking, energetic, sarcastic, talented, traveled, and smart as hell. 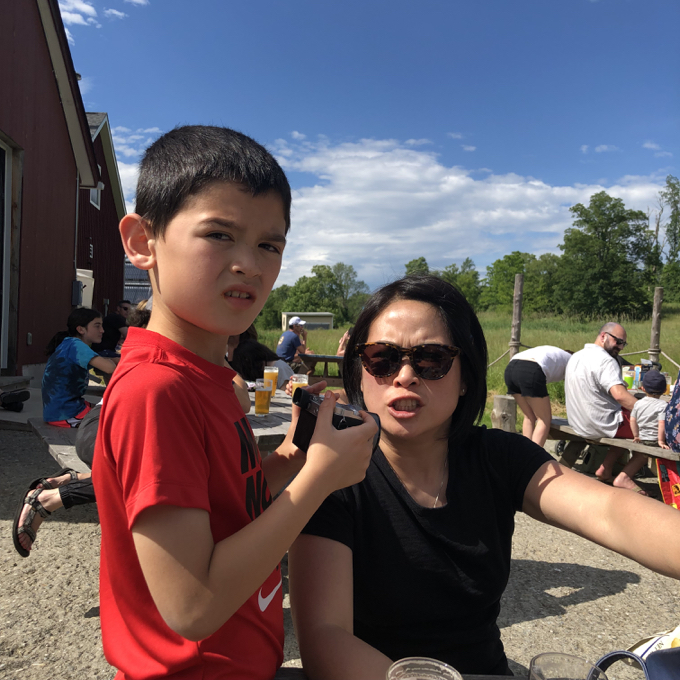 And now he has a brewery that everyone can visit, purchase pints, tour, and enjoy. Can… and should.

There are other farm breweries (as well as “farm breweries”) in the state now. From Salem to Colchester to Glastonbury – and the quality varies among them all. Thrall Valley Malt now is growing a variety of grains in their old tobacco fields. Several hop farms have cropped up over the past few years. It’s all very exciting. 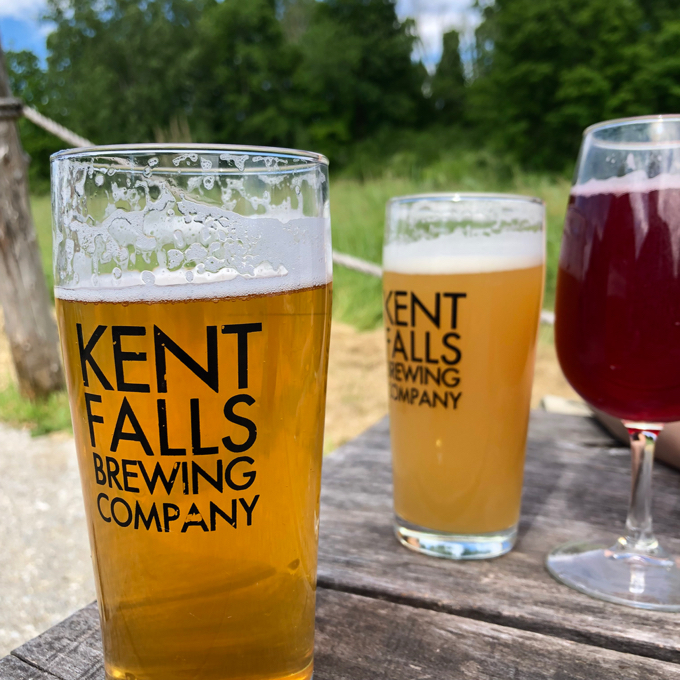 The old barn that I first visited in 2015 as a crumble-down near ruin has be rebuilt and now houses a taproom. The brewspace hasn’t grown but now every square inch is being used for brewing. Picnic tables and a kid’s area allow for lazy summer afternoons of fun for all.

Kent Falls still offers tours of their farm and preaches sustainable farming, brewing, and living practices. And through all the growth, changes, and brewers, Kent Falls is still putting out some top notch beer. Everything from NEIPAs to 3% table beers. Beer brewed with straw. Gose brewed with tomatoes. Sours brewed with Buddha Hands years before other breweries started dumping “weird” fruit into their kettles.

There is a startling dichotomy here: Kent Falls is rustic, homey, and very DIY and yet they have always been ahead of (almost) every curve. They held out on the hazy IPA thing for a little while, and even now, they’ve never gone full sludge… thank goodness. They have an electric car recharging station for when you get lost in your Tesla and find yourself driving around roads that will make you wonder if you somehow wound up in Vermont. They host events with high-end chef catering (this is Kent after all.)

I’ve been an unabashed Kent Falls (and Barry) fan since they came online and I don’t see that changing anytime soon. I can’t see them falling out of my top 10 Connecticut breweries no matter how many new places open up. Get out there, it’s great. 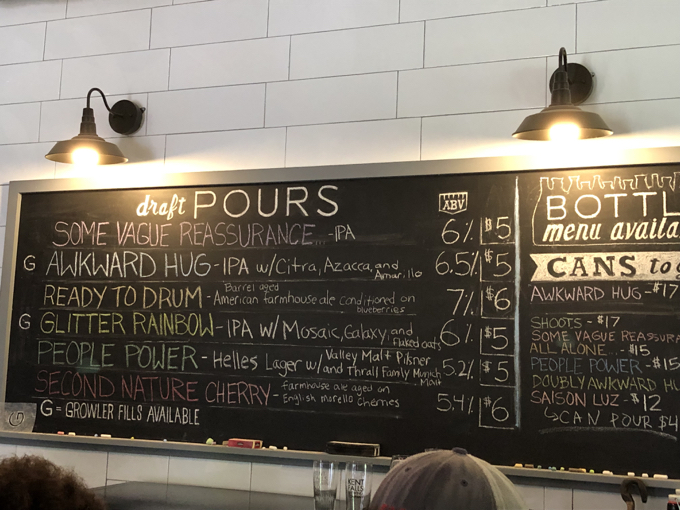