CTMQ > Everything Else > Geography > Kent Falls

2019 Update: I will be revisiting Kent Falls State Park and taking better pictures in a larger format. The below from 2009 is cringey at the moment.

For some reason, I’ve always hated the name Kent for a town. Don’t get me wrong, Kent is a lovely town with some great hiking (including the Appalachian Trail) and rich history. But “Kent” just doesn’t seem to fit in with the nearby town names of Salisbury, Cornwall, Falls Village, Bridgewater, etc. “Kent.” Bleh.

I know, I know… I’m sure its named for Kent, England… But still. 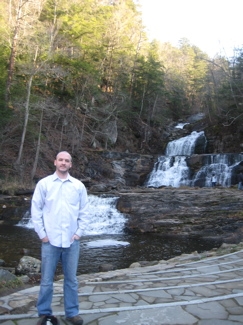 I wonder if, at any time in history, a guy named Kent from Kent married a girl named Sharon from neighboring Sharon, CT?

Anyway, we didn’t let the name dissuade us from driving down from the West Cornwall Covered Bridge on a sunny Sunday afternoon after Thanksgiving. The drive down Route 7 is beautiful in itself, but the falls are the exclamation point. 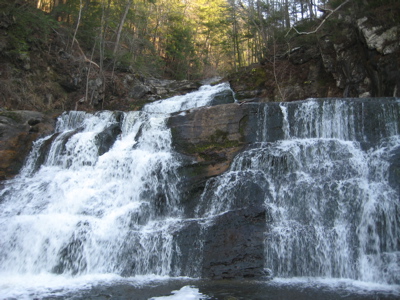 As with a lot of the “oldest, first, largest” things in the state, Kent Falls’ claim to being the “biggest” is not without controversy. I consider ctwaterfalls.com to be the authority on all things Connecticut waterfallia, as he seems singularly obsessed with them – a trait which I admire. He says, “Kent Falls is sometimes considered the highest fall in the state. It is actually a series of waterfalls and cascades that drop 250 feet over .25 miles. Kent Falls is not the largest single drop fall in the state. There are two major drops in this series a lower falls and an upper falls.” 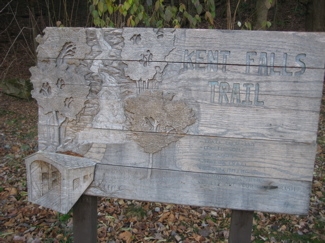 He lists Roaring Brook Falls in Cheshire as the highest single drop waterfall in the state, which is of course correct. While Kent Falls is impressive, I do concur that it’s just not the one single highest falls. Such a controversy. Let’s learn about the dang place from the state government, with a few notes from me.

Kent Falls, located in the northeastern section of the town of Kent, is a series of waterfalls on a mountain stream known as Falls Brook. The stream begins in the town of Warren, draining an area of six or seven square miles. It then flows west to the big fall where it plunges approximately 70 feet in a dramatic cascade. From here the stream descends in a series of lesser falls and cascades to the valley, where it enters the Housatonic River some 200 feet below the brink of the big fall only a quarter mile away. Much of the limestone over which the brook flows has been carved into interesting shapes including numerous potholes of all sizes. 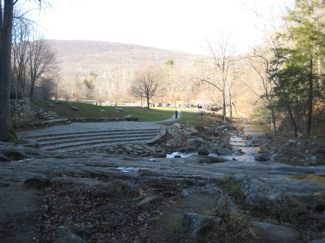 The Indian name of this area is “Scatacook” and there is considerable evidence that Native Americans fished and camped by the falls. Later, in colonial times, mills were also present along the brook. Acquisition of the park began in 1919 with the gift of 200 acres by the White Memorial Foundation. Other parcels were donated or purchased until the present 295 acres were acquired. The area was developed in the 1930’s by the Civil Works Administration. In the mid nineteen-seventies, considerable trail reconstruction was done by the Youth Conservation Corps of Connecticut. The covered bridge is an authentic reproduction built in 1974 by a park employee, Edmund Palmer. 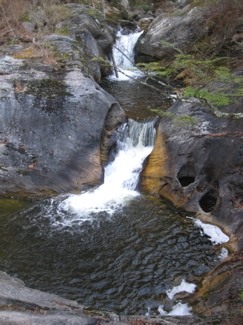 The flow in the cascade at Kent is normally heaviest in the spring when the winter snow is melting. However, the falls can be dramatic at any time of the year, particularly after substantial rainstorms. Fall foliage season is also an excellent time to enjoy the area. Because of its exceptional scenic qualities, Kent Falls has been featured in a number of magazine and television advertisements. 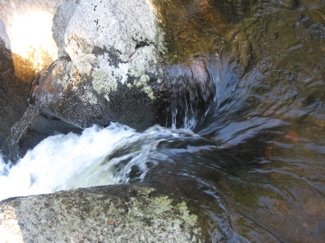 The most obvious feature at Kent Falls is, of course, the falls. Actually, they are a series of falls and cascades. Multiple falls and cascades, such as these, generally form where the bedrock contains alternating hard and soft layers. This part of Connecticut was once made of coral reefs, offshore from the northwestern part of the state. As the Iapetos Ocean closed when Europe and Africa moved our way, these reefs were squeezed and buried under other rock. With increasing heat and pressure, the minerals in these rocks recrystallized, and the former coral reefs turned to marble. Sand and mud around the reefs formed the impurities in the marble that cause some layers to be more resistant to the effects of the flowing water. 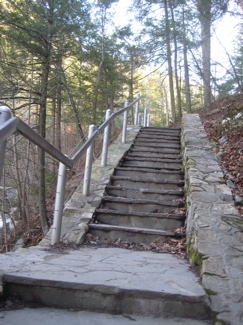 Damian was being lazy (surprise surprise), so I walked the trail to the top by myself. It is well-maintained and there are several well-built viewing platforms along the way. The volume of flow was a bit lower than I would have liked, but I’ll take it. There is no place to view the entire cascade and you can’t see the bottom from the top which is a little disappointing, but hey, this is Connecticut and it’s not like we’re known for our waterfalls.

I quickly made my way back down to the bottom to find Hoang and Damian throwing pebbles into the creek by the parking lot. I stopped to snap a picture through a window in the little covered bridge and just watched them for a few moments to realize again that Damian sometimes likes much simpler joys in life than I do.

And for some reason, that makes me happy. 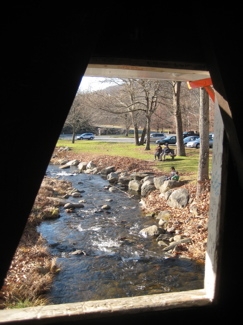 One last cool thing here at Kent Falls State Park is the fact that it is one of the five slightly mysterious Connecticut Art Trail Viewpoints! The information on the exact viewpoints is a bit shoddy, and a previous visit to Gillette Castle State Park down in East Haddam was beautiful, but we never found a marker. I’m happy to report that there is a nice big sign at the back of the parking lot here, and I can now move forward with the five viewpoints knowing that they are indeed real. 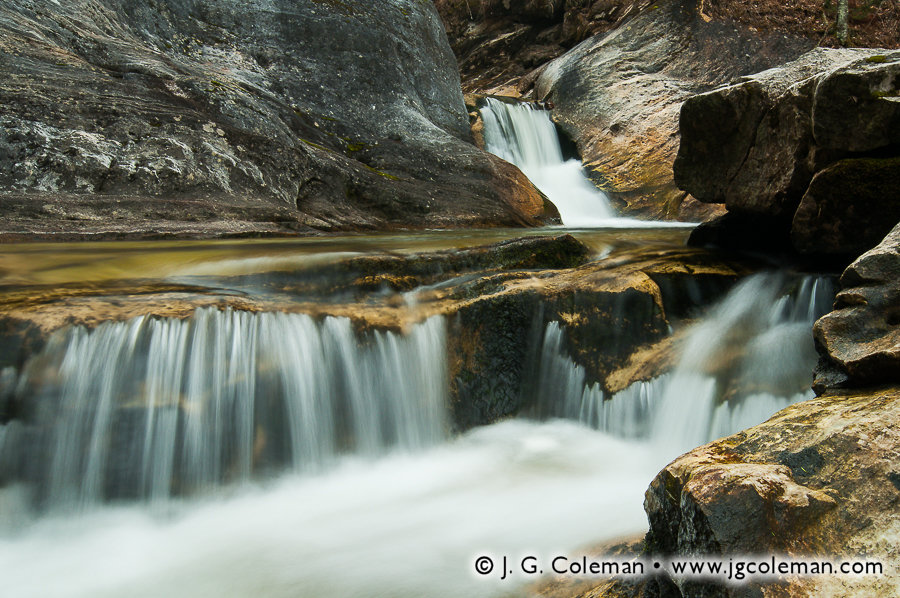