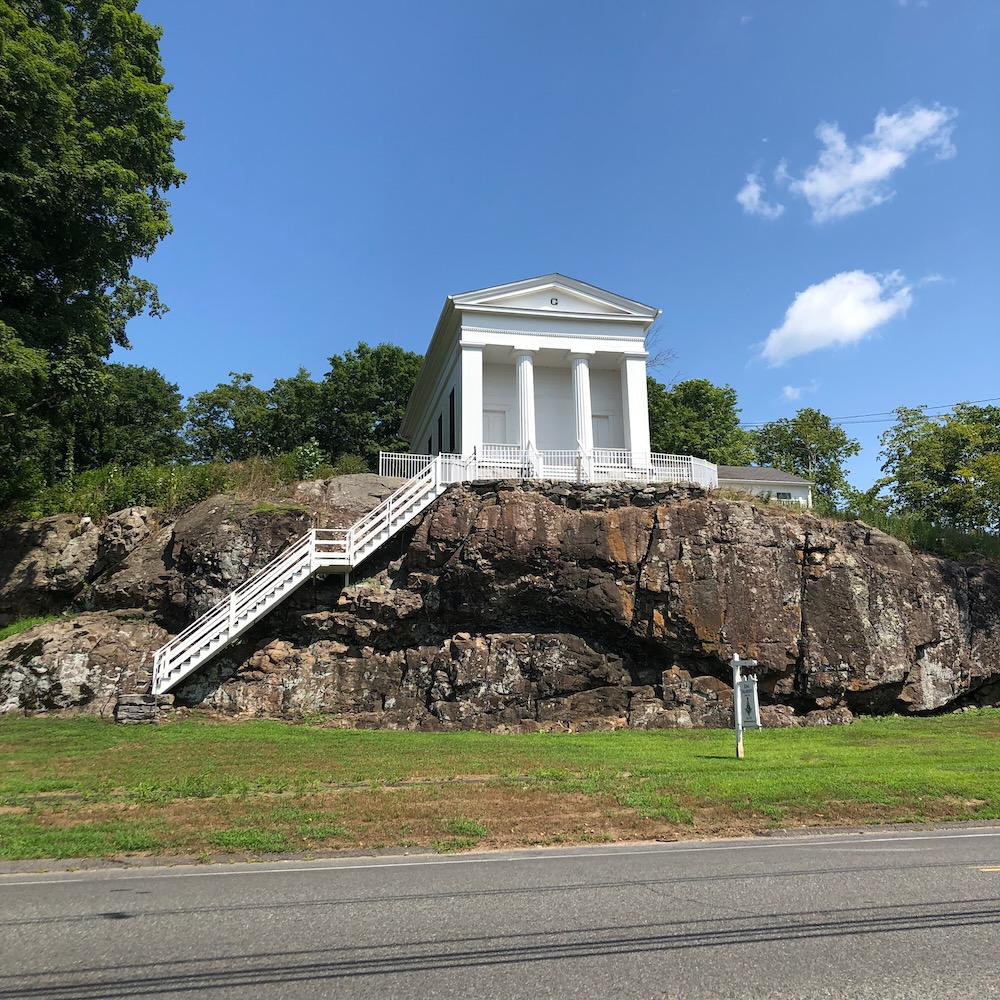 That thing up there is King Solomon’s Lodge No. 7; a Masonic Temple. Probably not too distinct from dozens of other Masonic Temples except for one thing: It’s on top of a cliff on a busy Main Street.

The building was built with Greek Revival influences and deep Masonic themes in its design. Now, I know very little about the Masons (my maternal grandfather, whom I never knew, was a Mason), let alone any of the supposedly dastardly secrets they hold. All that “Secret” stuff is just nonsense to me. But the history of the organization and its civic values are worth touching on.

In eighteenth-century Connecticut, the values of liberty, equality, and fraternity aligned the Masons with the aims of Revolutionary Americans. Fraternity was a popular virtue for colonists because their social connections and positions in the New World were severed from the strict order of the Old World. It was within this setting, and its implicit desire for stability, community, and social rank, that the brothers of Woodbury formed their Lodge on the Rock, now considered the oldest Masonic temple in continuous use in Connecticut.

I guess it’s that “desire for social rank” that rankles people. It’s like a frat for old guys… which is a little weird. But Masonry has been around forever, dating back to the middle ages in Europe. As you’d guess, it was a trade organization established to regulate stone-working.

The Masons, dedicated to craft traditions, charity, and building fraternal ties, claim descent from Hiram Abiff, the master workman for the building of Solomon’s Temple, and are linked to the ancient Greek geometer Euclid. The group’s secret practices, dating from its inception, included codified handshakes and passwords, which helped identify the level of skill in mobile building trades. Confidentiality also gave the group a shadowy mystique that fueled anti-Masonic sentiment and conspiratorial rumors throughout its history. In 1717, four London lodges appointed a layperson—instead of a craftsperson—as the Grand Lodge Master. This marked a shift toward speculative Masonry, wherein members were unconnected to the building trades. Ceremony and ritual activity took on a heightened importance at this time, and solemn respect for order was appealing to speculative Masons in colonial America.

Bros being bros I guess. 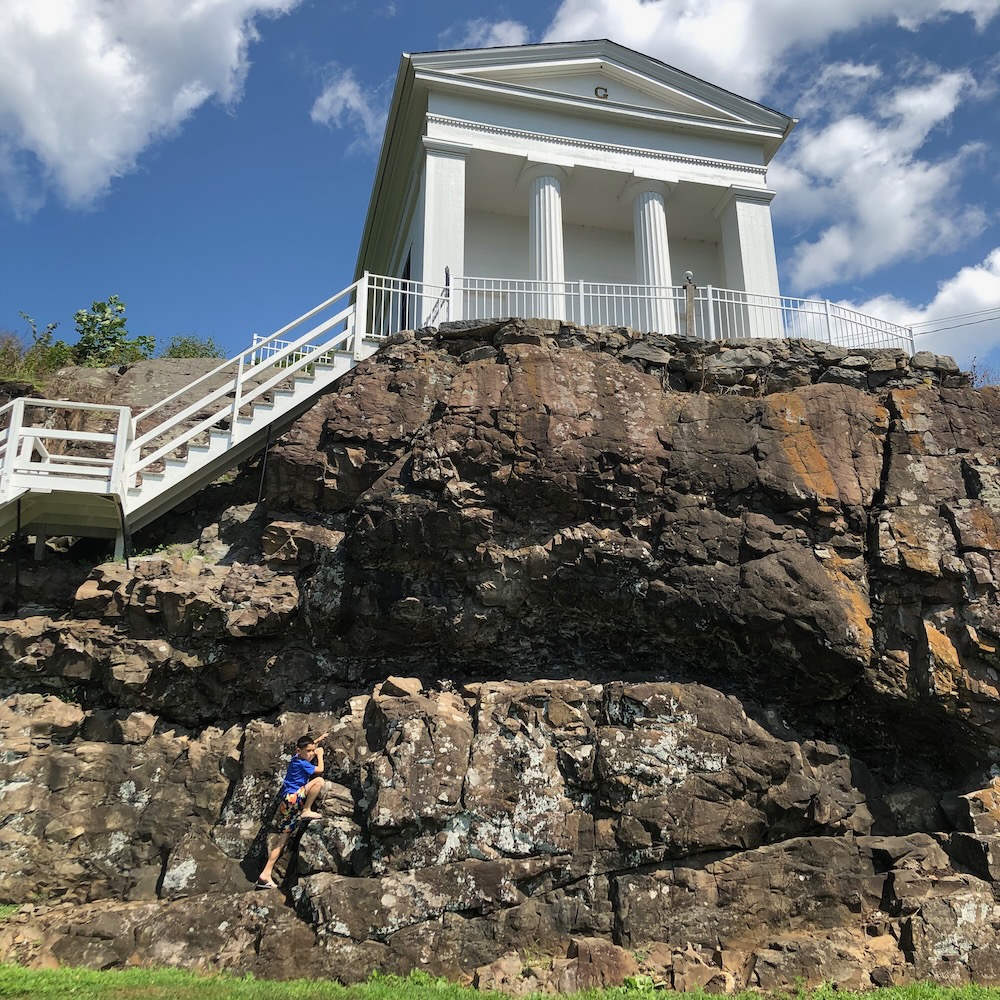 They say that the charter for this branch was issued from some fancy Mason Lodge in Boston in 1765. But get this – they did not hold their first meeting until 1775. Yes, it took 110 years for these guys to figure out their secret handshakes and order their rings.

The lodge wasn’t built for another near-century, and the story is pretty funny. The guy the Masons bought the land from had a son-in-law who owned the land behind the lodge. This guy, Levi Douglas, passionately disliked Masons and refused their request to transport materials to build the lodge across the family’s land. Thus, the Masons had to transport building materials up the steep cliff, resulting in the cliffside stairs, now an iconic part of the whole deal here.

The building was finished in 1839.

It used to have symbolic carpets and trompe l’oeil details and all sorts of Masony things. I have no idea what’s been retained in the 21st century, but the lodge did do a pretty major renovation in 2014, after several additions were built over the years. The stairs up the rockface are no longer functional and Calvin found that bouldering here was pretty difficult.

And there you have it. The building’s purpose isn’t a secret, as there’s a sign out front explaining what it is. But even so, you know you’ve been started by the ridiculously out of place little building up on the giant boulder in the past.

You know it, I know it… And the Masons, somehow, know it. They just do…

Most of the info for this page is from here. 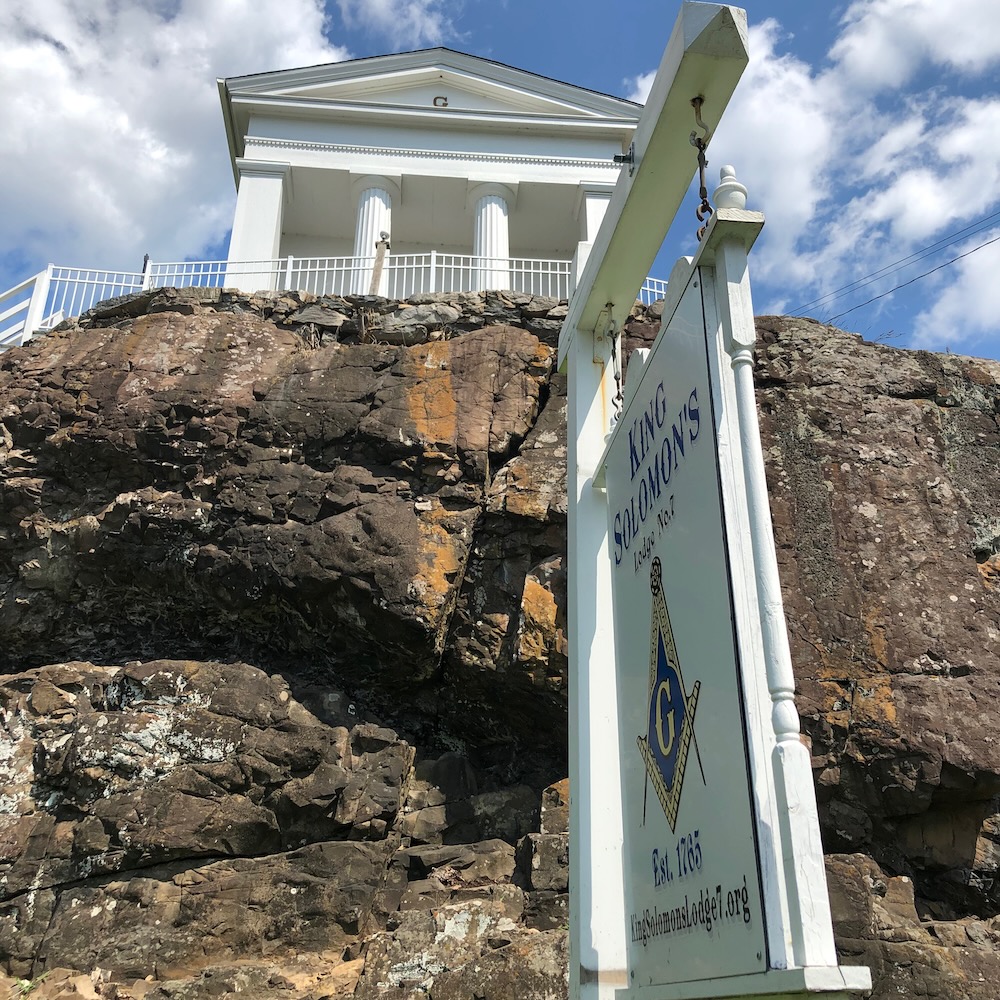