I just learned that Ninevah was the largest city in the world at one time. From about 660-612 BC. I remember it from my childhood Bible studies, but for those of you without that impossibly fun background, Ninevah was located where modern day Mosul in Iraq is today. Which all anyone knows about anymore is that it was the site of a pivotal battle with ISIS/ISIL and that, perhaps ironically, Assyrian Christians were driven from it and… it wasn’t a nice place to visit in the early 21st century. 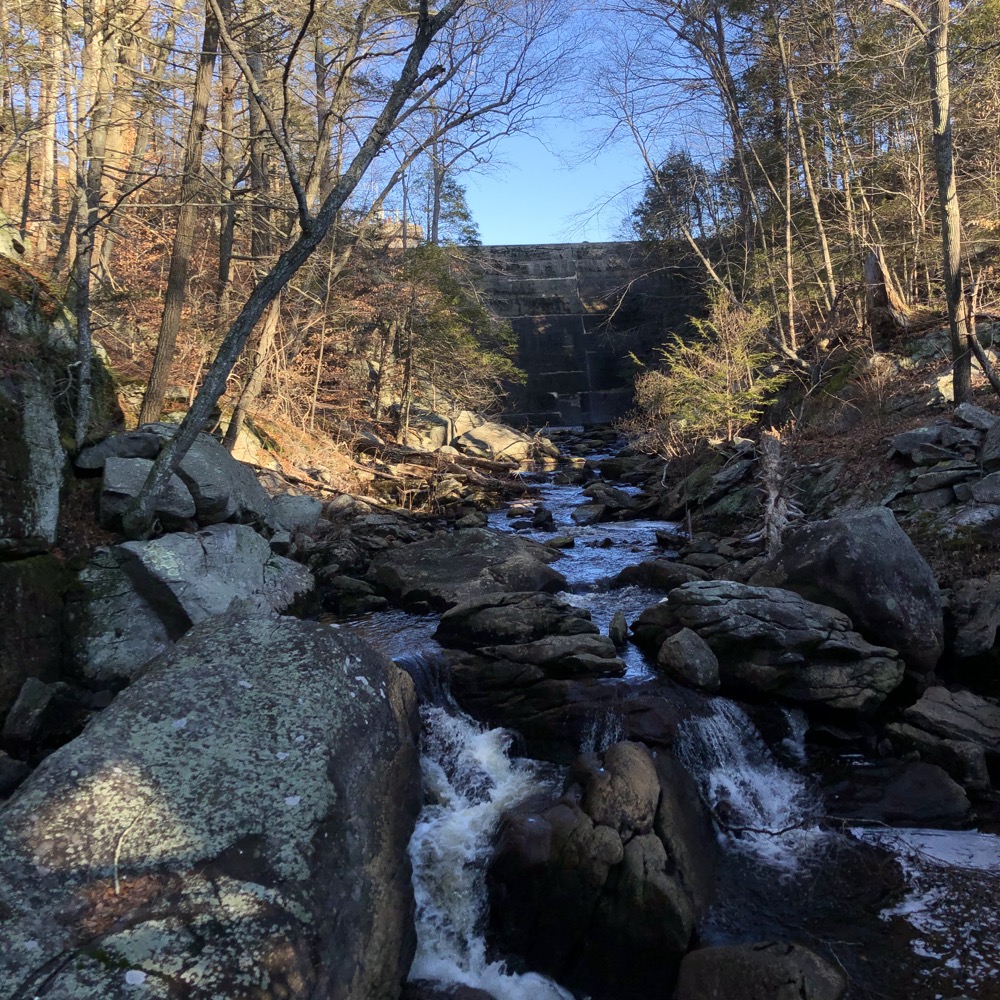 Connecticut’s Ninevah is a bit tamer. You could still die here I guess, with an unlucky fall from one of the ledges above the gorge. And some of the graffiti on the bridge spans underneath route 80 aren’t “safe” for impressionable young eyes.

Wait. Did I just compare Mosul, Iraq to Madison, Connecticut somehow? What is wrong with me? 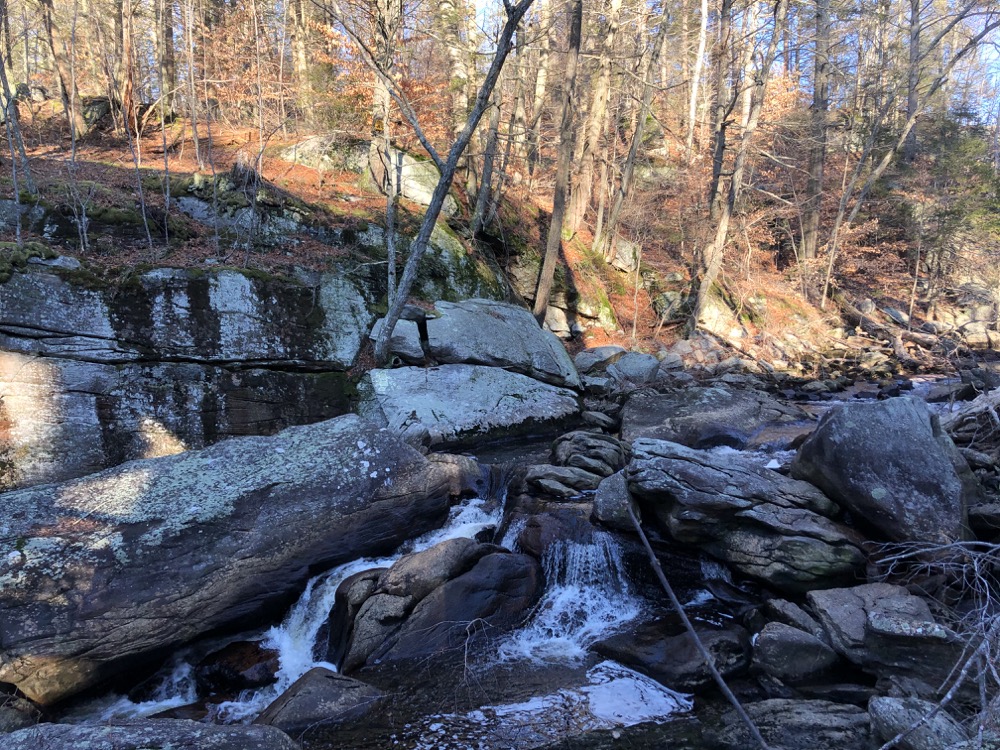 You don’t need to answer that. Let’s just get to the falls. The Hammonasset River flows from Lake Hammonasset (which is actually the dammed Hammonasset Reservoir) and serves as the border between Killingworth and Madison.

I assume the falls used to be more legit before the dam was built, but the chasm here has always existed. In fact, there’s yet another leaping lover story attached to this place. Man, Connecticut loves its leaping lover stories. This one has a darker twist than most though. 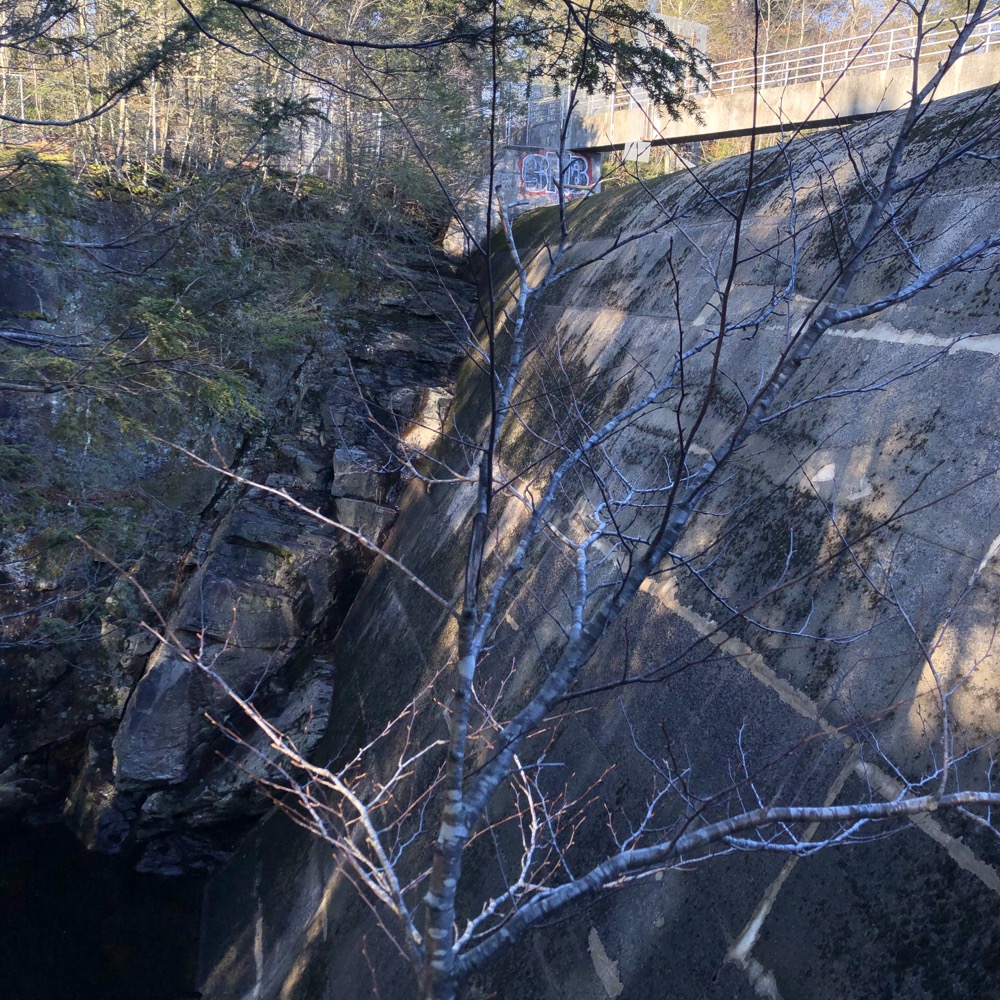 These falls were once visited by a Native American woman who learned her spouse had died in battle and, overcome with sorrow, jumped from the cliffs, according to local legend. But her spouse returned soon after and, according to “Folktales of Connecticut” by Glenn E. White, “grief-stricken, the young man ran to the top of the falls shouting that if she had loved him enough to leave life rather than to live without him, he would do the same for her.”

But the man survived his leap, and went on to marry another woman. “Her spirit is angry that the young man was able to forget her so easily and to marry another girl. That is why some say they hear wailing in the night near the falls,” according to “Folktales.”

I heard no wailing. And I spent a lot of time in the area. 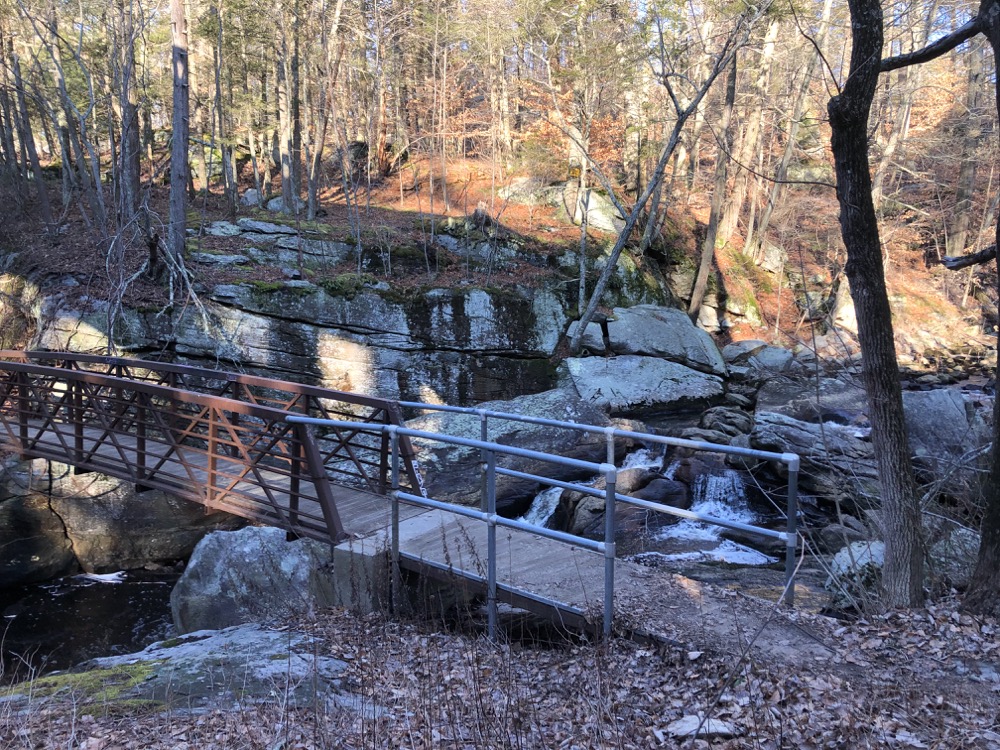 I had begun my day at the Madison Land Conservation Trust’s Summer Hill Trail just northwest of here before taking on the rather large Regional Water Authority’s Lake Hammonasset property. RWA trails require a permit, but these falls and the herd paths beside and below them are visited by tons of people without the permit. 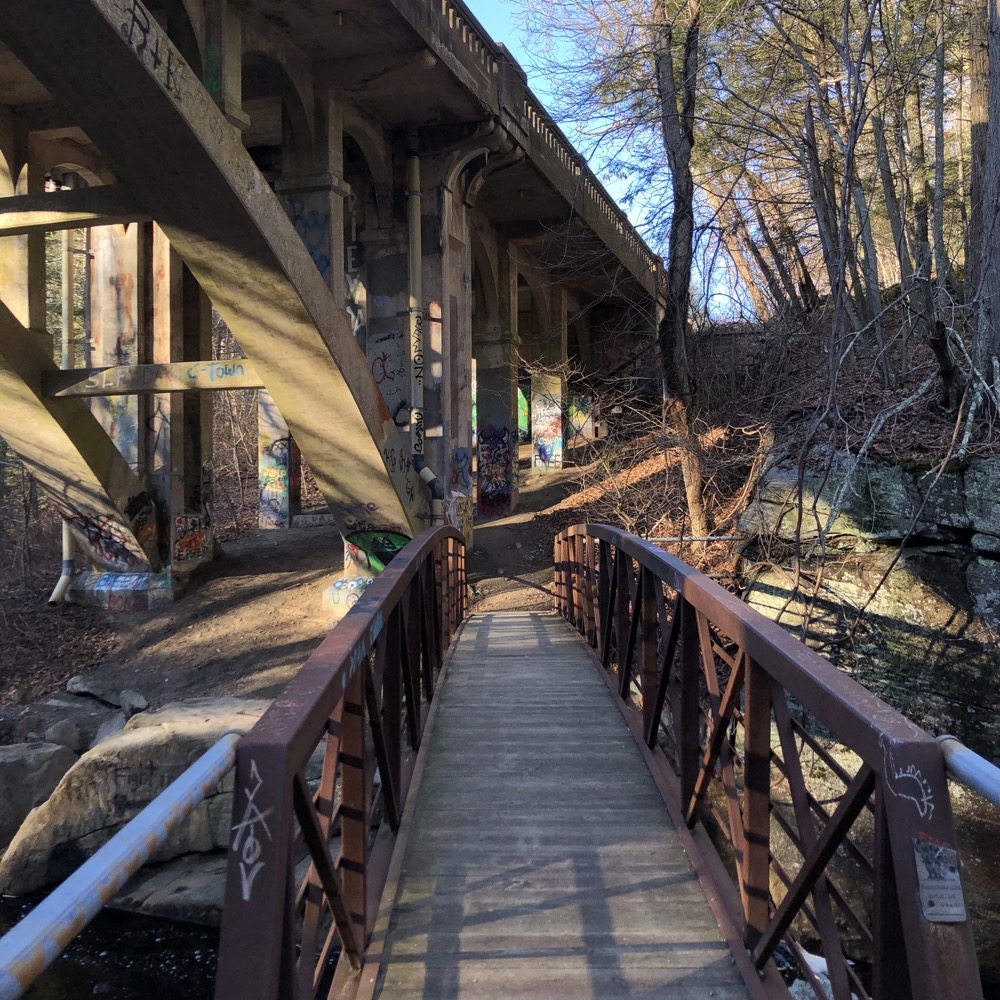 I was a bit tired when I approached the gorge and cascades – and was also completely caught by surprise. I had no idea what I was approaching as I hit the dam above and began exploring. The chasm here is far deeper than my pictures show, and I wouldn’t want to get too close to the edges on top in icy conditions.

I picked my way down to the bottom to find a new and well-constructed footbridge across the river in the shadow of the route 80 bridge. Countless people drive over this place with no idea what lies below – it’s almost completely hidden from above.

But plenty of local kids are aware of what’s below, as the many layers of graffiti can attest to. Some of it oddly specific with its vitriol. 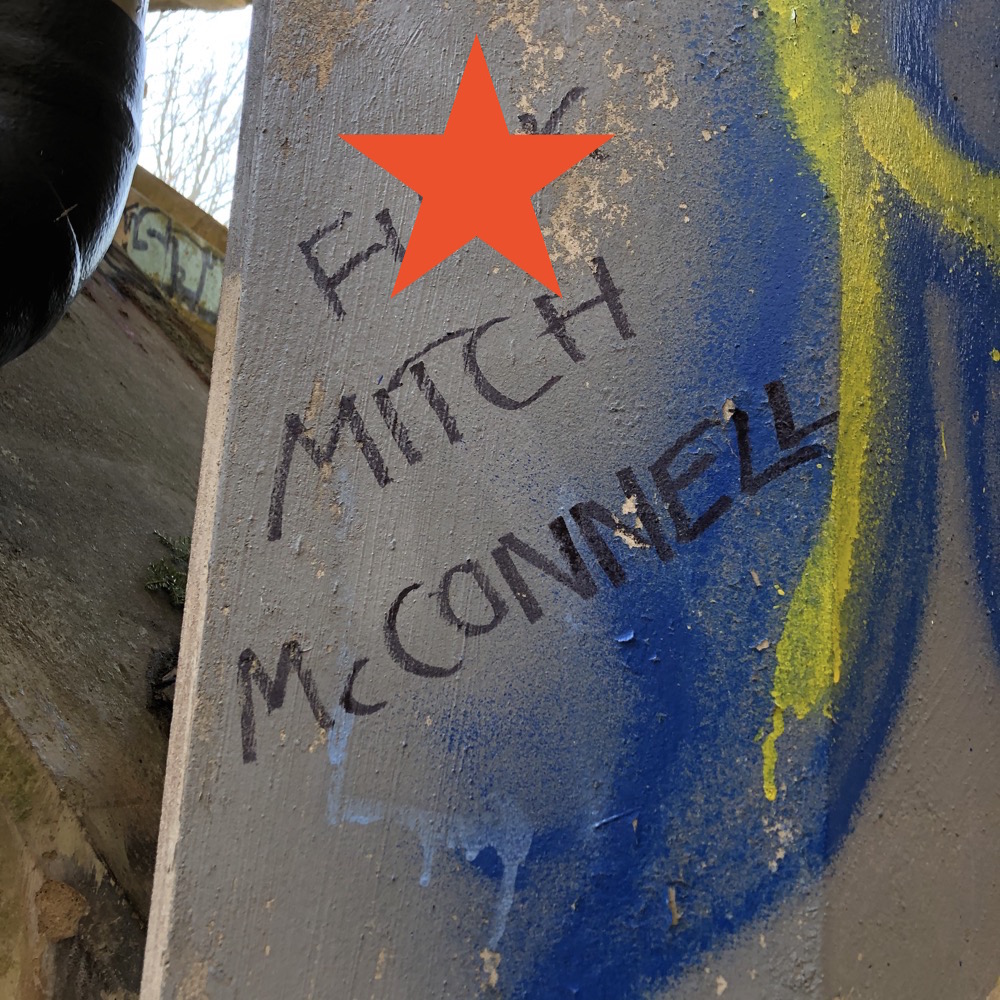 The falls themselves aren’t really falls at all, but a fairly tepid series of cascades. It is easy to imagine, however, that when those star-crossed lovers who (didn’t really) leap so many years ago, a more vigorous rush of water. Even with the dam and road above, this area is still beautiful.

Hemlocks and pines line the rock walls and the rushing river drowns out the traffic noise above. Ninevah Falls is one of those Connecticut “hidden in plain sight” spots that very few beyond locals are aware of – which you know I love. 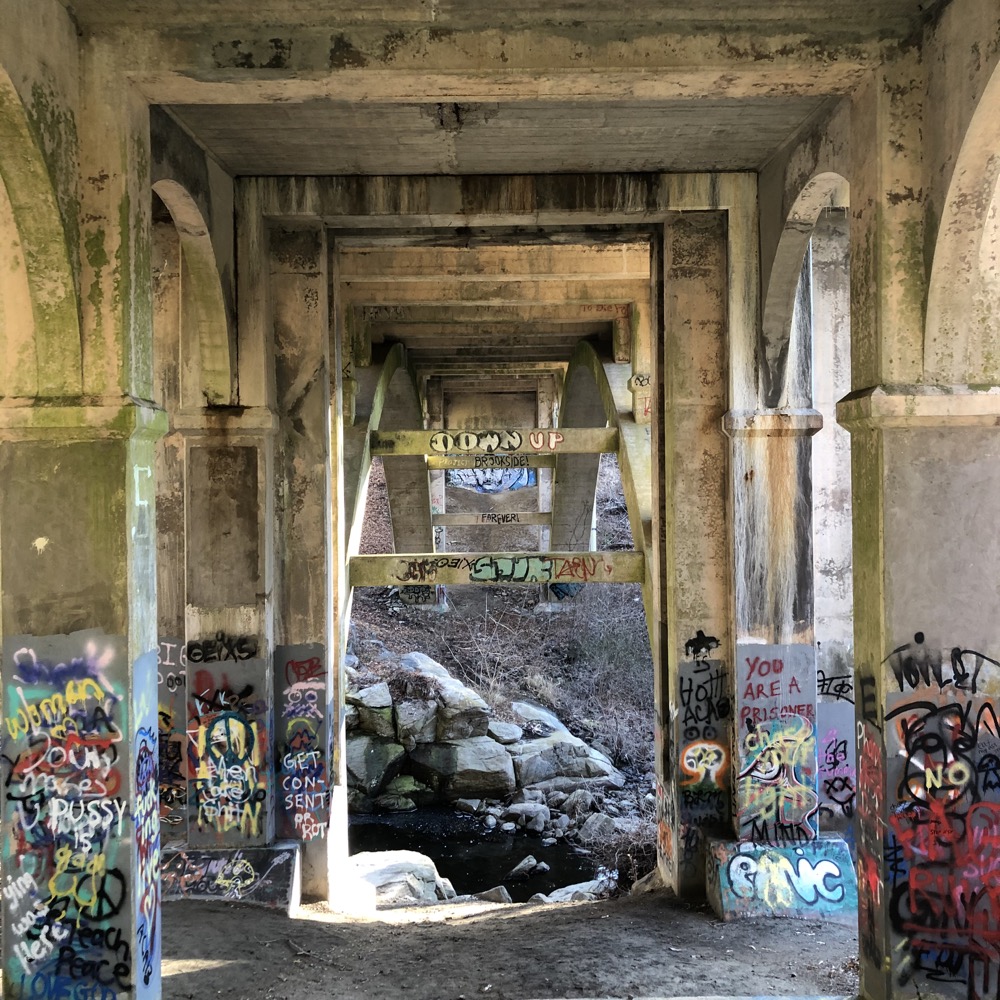 No matter how you approach the bottom of the falls – from a roadside pull out, from the RWA trails, from the MCLT’s Bailey Trail – there’s plenty to explore above and below. An RWA green blazed trail will take you up to the dam, but again, you technically need a permit to hike that. (And to be honest, if there are going to be RWA authorities anywhere along their hundred miles of trails in south central Connecticut, this would be the place. Not that they’re going to arrest you, but you know, just be cool and follow the rules.)

The bridge over Nineveh Falls is located on Route 80 about a mile east of the rotary with Route 79. You should check it out sometime. As for Mosul, I’d suggest waiting a few more years for that trip. 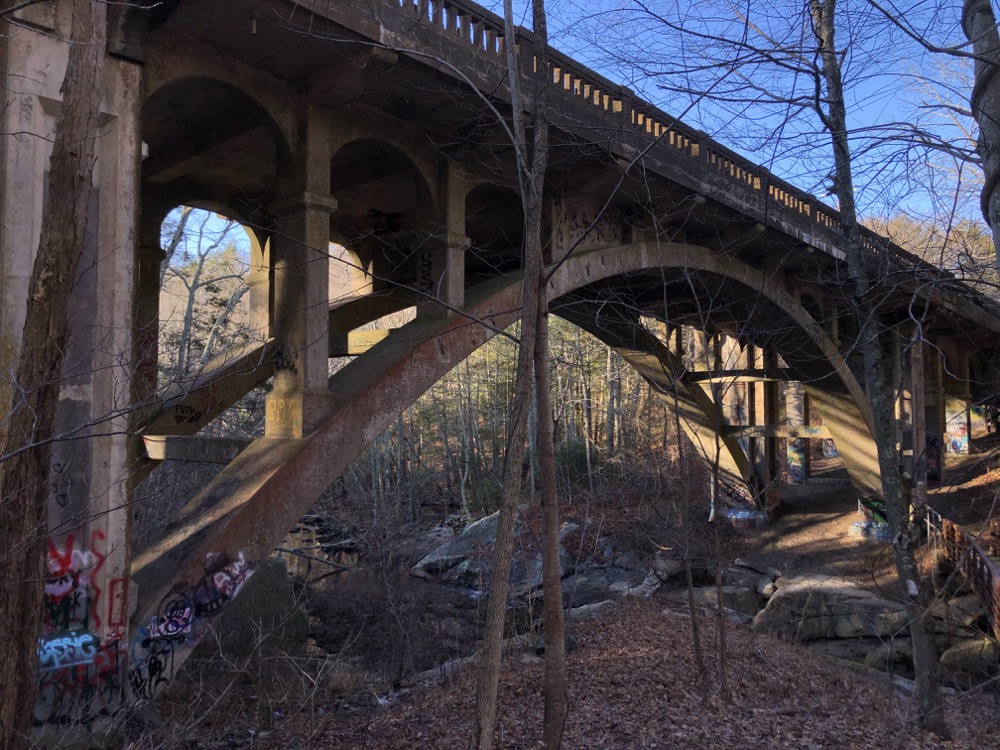