Cutting to the chase – the purpose of this page’s existence really has nothing to do with the trail of the title. I’ve hiked this trail before, way back in 2007 with Hoang. 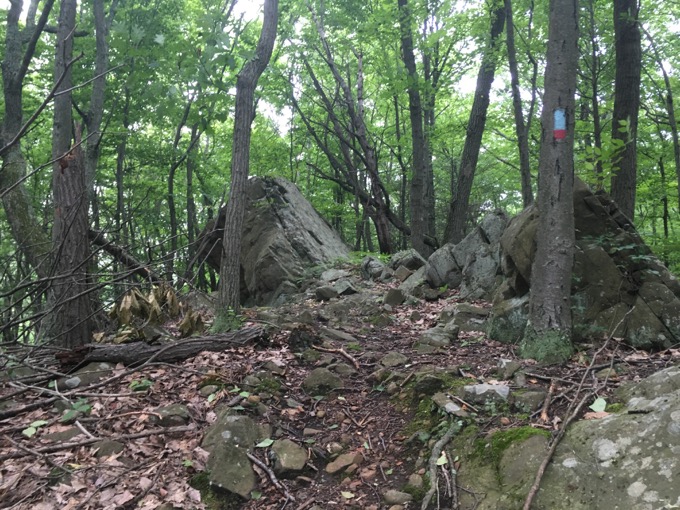 When I edited that page in 2017, I removed all the pictures from what is now the blue and red blazed “Ledge Road Connector,” with the intent being that I’d redo the Southington – Plainville – New Britain section of the Metacomet Trail above Crescent Land and along Bradley Mountain behind the Tilcon quarrying hellscape.

From [just past the second view of Crescent Lake], it was all downhill through beech and hemlock. Down, down, down… It seems to me that South-to-North is definitely the way to hike the Metacomet. I know it sounds nonsensical, but it just seems like we’re always climbing less than we would if we were going the opposite direction. Not that there are any climbs of exceptional difficulty anywhere along the trail.

Once at the bottom, we hit Ledge Road and a sharp turn to the North. In a weird way, I sort of look forward to the road walks now. They are sometimes interesting in their own right, and have made me appreciate just how cool the Metacomet truly is. It is certainly unique in the way it “gets away” from development quickly and beautifully in a part of the state where it just seems impossible to do so.

Halfway down Ledge road we hit some construction – and quizzical looks from the construction men to say the least. They were repaving the road so we were forced to walk across a bunch of lawns.

Towards the end of Ledge Road, we were afforded a view of “Rattlesnake Mountain” in the distance.

I believe I’m okay in saying that this is the worst part of the 63 mile trail. A right onto the busy Woodford Avenue and then a left onto Crooked Street to cross Interstate 84. There are no sidewalks and the shoulder is about a foot wide. There are no blazes here either, but that didn’t really matter. What mattered was not dying. 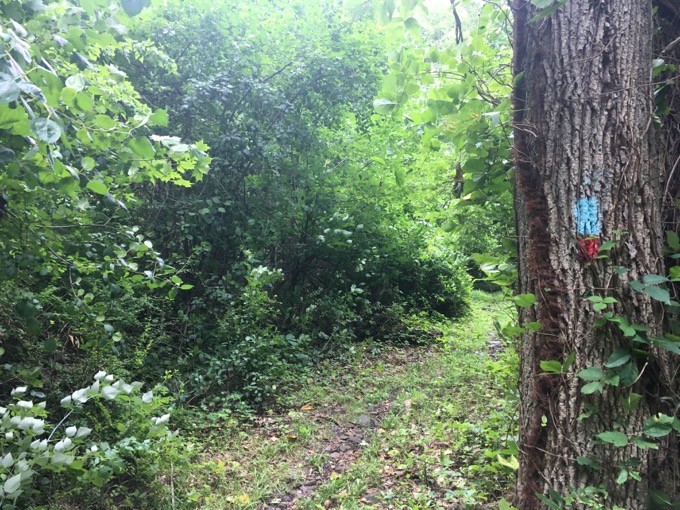 None of that applies anymore! Now the Metacomet continue northerly past Crescent Lake, clips the southeast corner of Plainville, and then drops into New Britain and walks under I-84 via Wooster Street. The roadwalk distance hasn’t much changed, but the safety and ease of it has improved dramatically.

2018 Note: Tilcon wants to expand their quarry which, if approved, will likely require another reroute in this area. 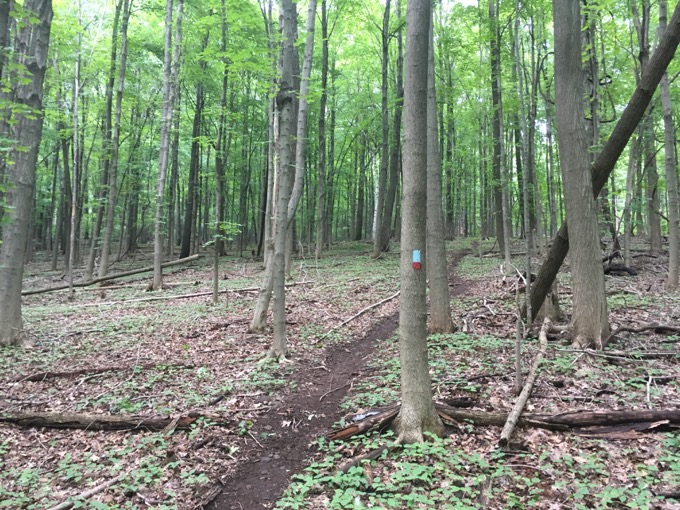 There is safe parking for one or two cars on Ledge Road. The trailhead here is a little hard to find, but once you do and breach the forest edge, the trail is well-marked for its entire length. 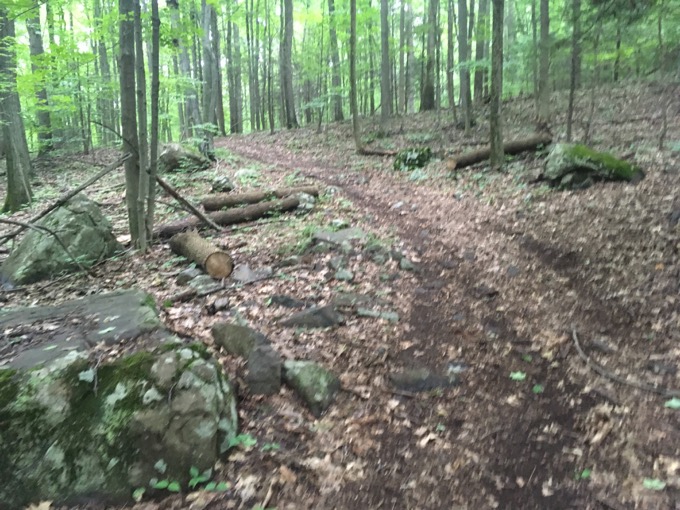 I walked up Bradley Mountain and was reminded of how steep some of these trails off the Metacomet Ridge can be. Trails ike, oh, I don’t know… The Ledge Road Connector.

It actually isn’t too bad, but with the trail turned to mud by the rain, it was certainly slippery. It is blazed very well, and once past a couple woods roads that (I would think) lead over to Crescent Pond, it was no longer mud I had to contend with, but rocks. 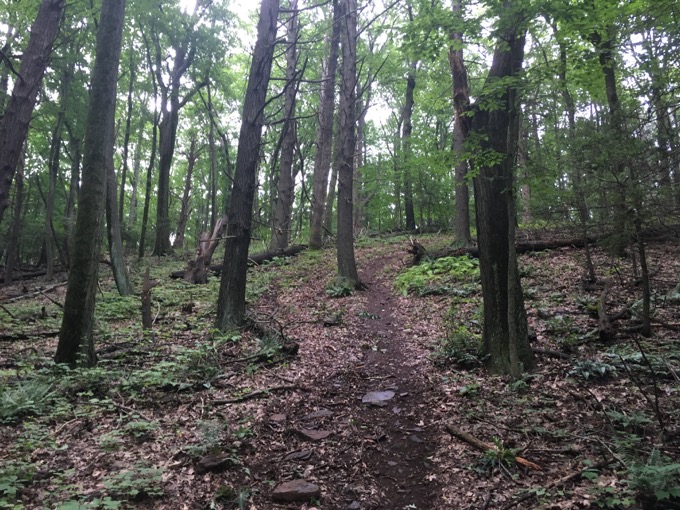 For those of you who have never really explored our “urban” sections of the Metacomet Trail, you will be shocked to find out how remote it feels. Even here, near I-84 and the towns of New Britain, Plainville, And Southington, you can easily imagine being hundreds of miles away.

The monoliths appear from nowhere, and the trail is sure to skirt past as many as possible. It’s just a cool area that probably surprises a lot of people. 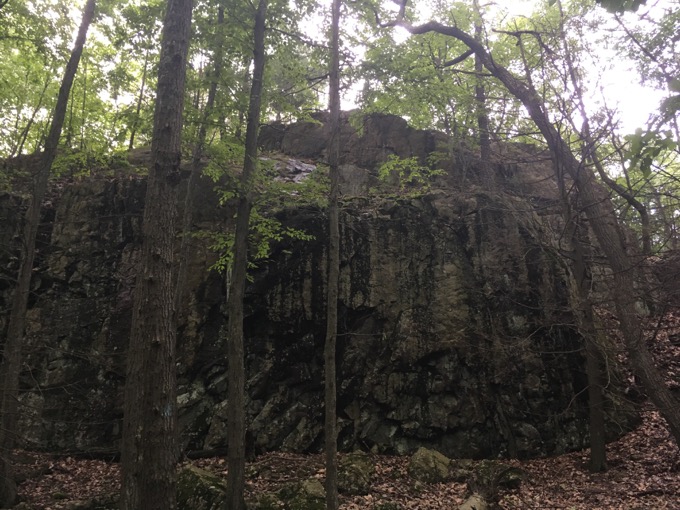 I was looking for a specific boulder/cliff thing. I forget how I came across a mention of what I thought were distinct rock formations: Boy Rock, Indian Head, and The Great Stone Face.

And I’ll admit, with scant information to go on, I’m still a little unclear about all of this. A Plainville woman has “written a book” (in her parlance) about the rock(s). There’s rumor this “book” is at the Plainville library, but I skipped it and decided to try to find this stuff on my own. 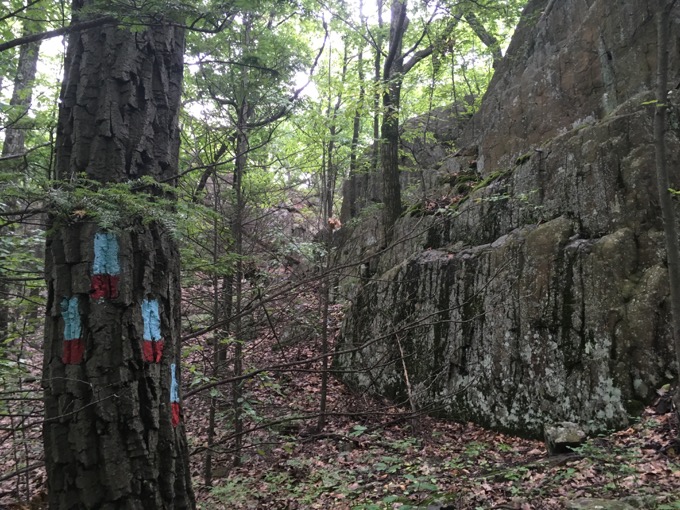 I left the trail here.

Nearing the top of Bradley Mountain on the Ledge Road Connector, there are many candidates. I had read somewhere that Boy Rock (etc.) was “behind Boysenberry Pond.” I can find no reference to such a pond name here, but we can all assume it’s the pond just north of the trail when the boulders appear. 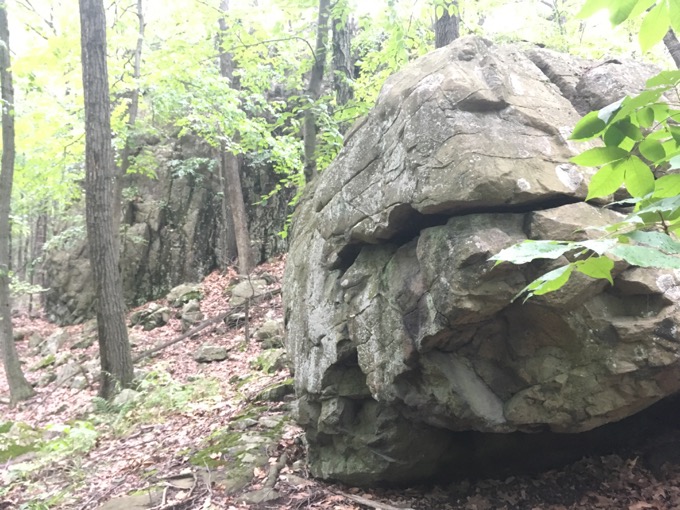 The trail doubles back on itself below a massive cliff. This is where I took a left off the trail and over towards “the back of Boysenberry Pond” Again, I wasn’t sure if I was looking for one rock or three. In a downpour, I scampered through the woods looking at all of the cliffs at different angles.

Here’s what I’ve got: 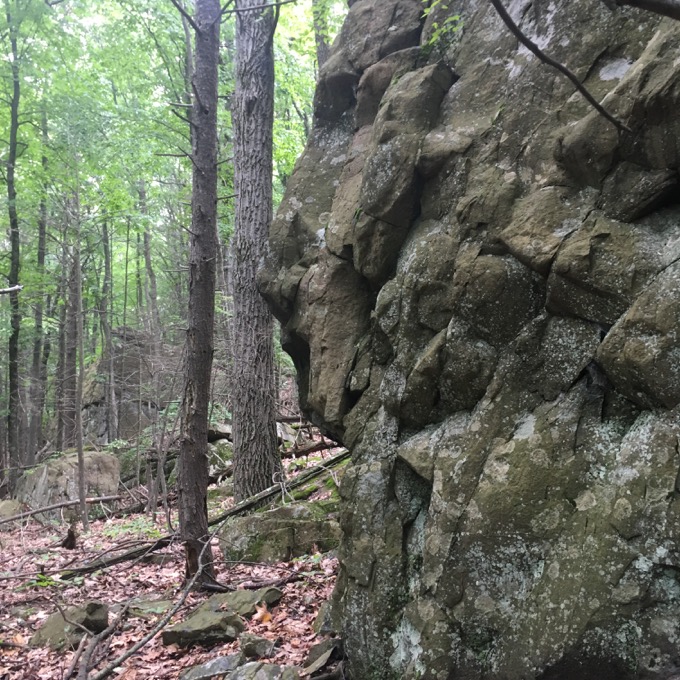 LOL. I’m not sure that’s it. Tilcon’s quarry is a very short way up the hill and who knows, maybe they took Boy/Indian/Great Rock. I looked at a LOT of cliffs and I’m calling it. It’s not like anyone knows about this thing anyway.

Here’s a picture of it from an “article” by the same author of the “book” I mentioned: 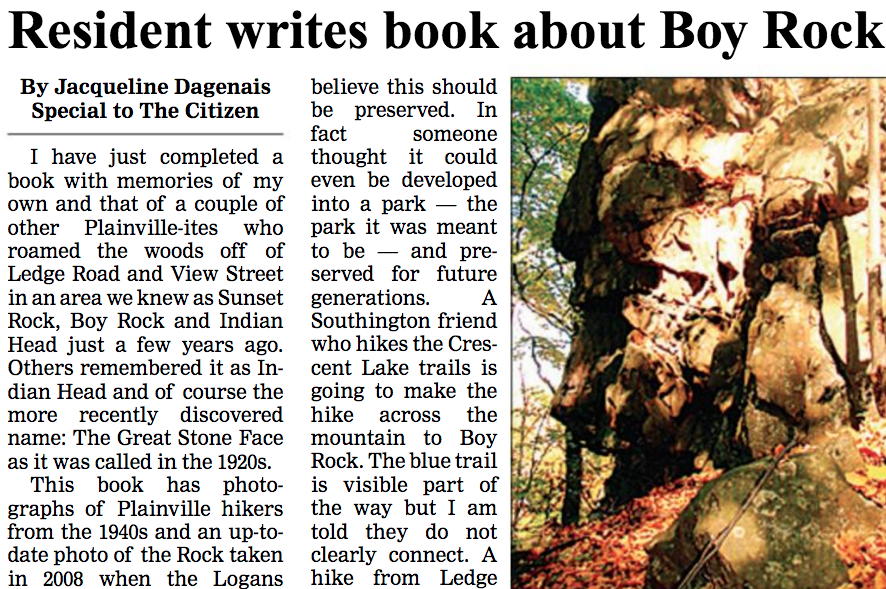 Back to the red/blue connector trail and… holy cow, the rain became blinding. Since I’d already done this trail back in the day, I just went back down steeply to my car.

Good enough for me. I was very wet. 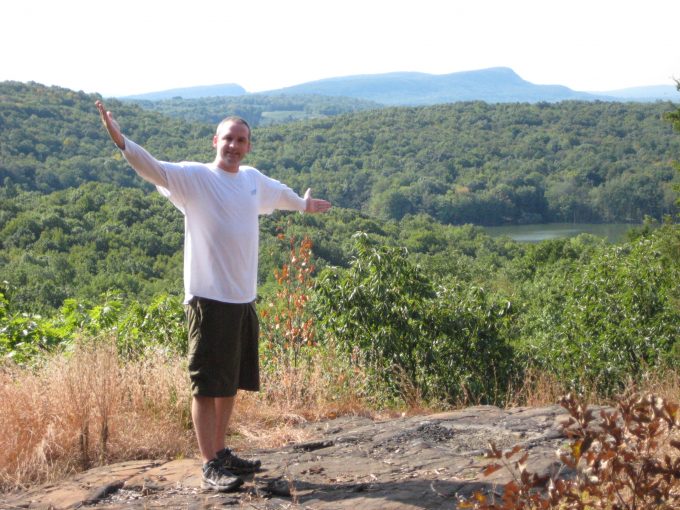 Here’s how it looked in 2007 from Bradley Mountain.