Note: This section includes a reroute off of roads which is nice. I also made the effort to find the original pictures, so this page looks fairly nice. If you want to start at the beginning of the trail, go the Metacomet Intro here.

After taking a couple months off from the Metacomet Trail, we picked up where we left off at the Southington/New Britain border for what turned out to be a far better hike than I’d expected. At this point, I really need to change my mindset because every section of this trail has been enjoyable for multiple – and varied – reasons. 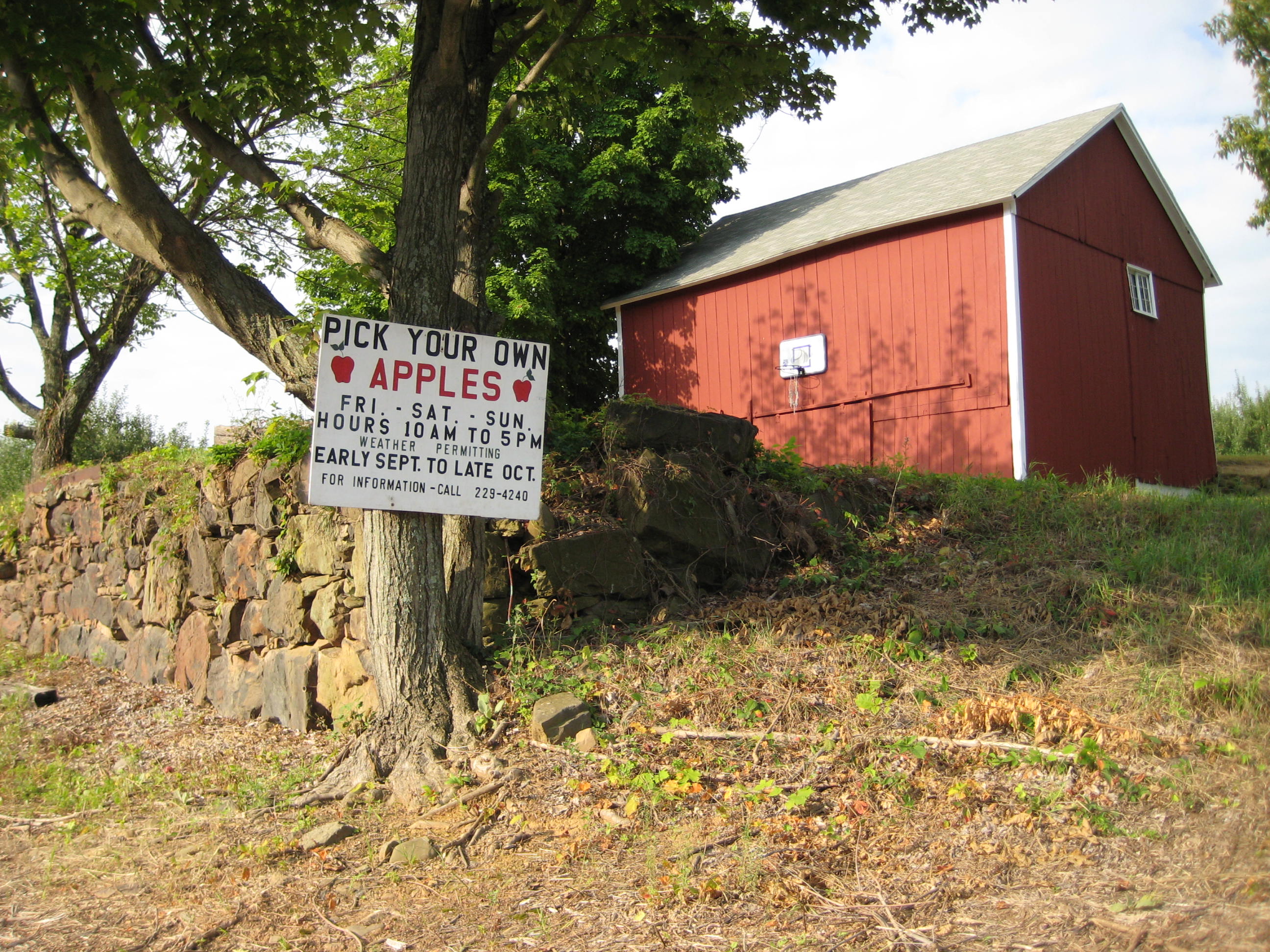 For such a short section, a third of which would be along roads, I rather enjoyed myself. There are a couple really nice views, some very interesting geology, and some absolutely delicious donuts. D’oh? Donuts? Yup… Made daily right there along the Metacomet Trail! I just love having reasons to keep Hoang plugging along; carrots (in the form of donuts) at the end of sticks.

We began our jaunt along Long Bottom Road in the middle of an orchard. Somehow we’d left the high ridges of the previous section and descended into Apple World. But wait… First there’s Hoang’s traditional starting picture: 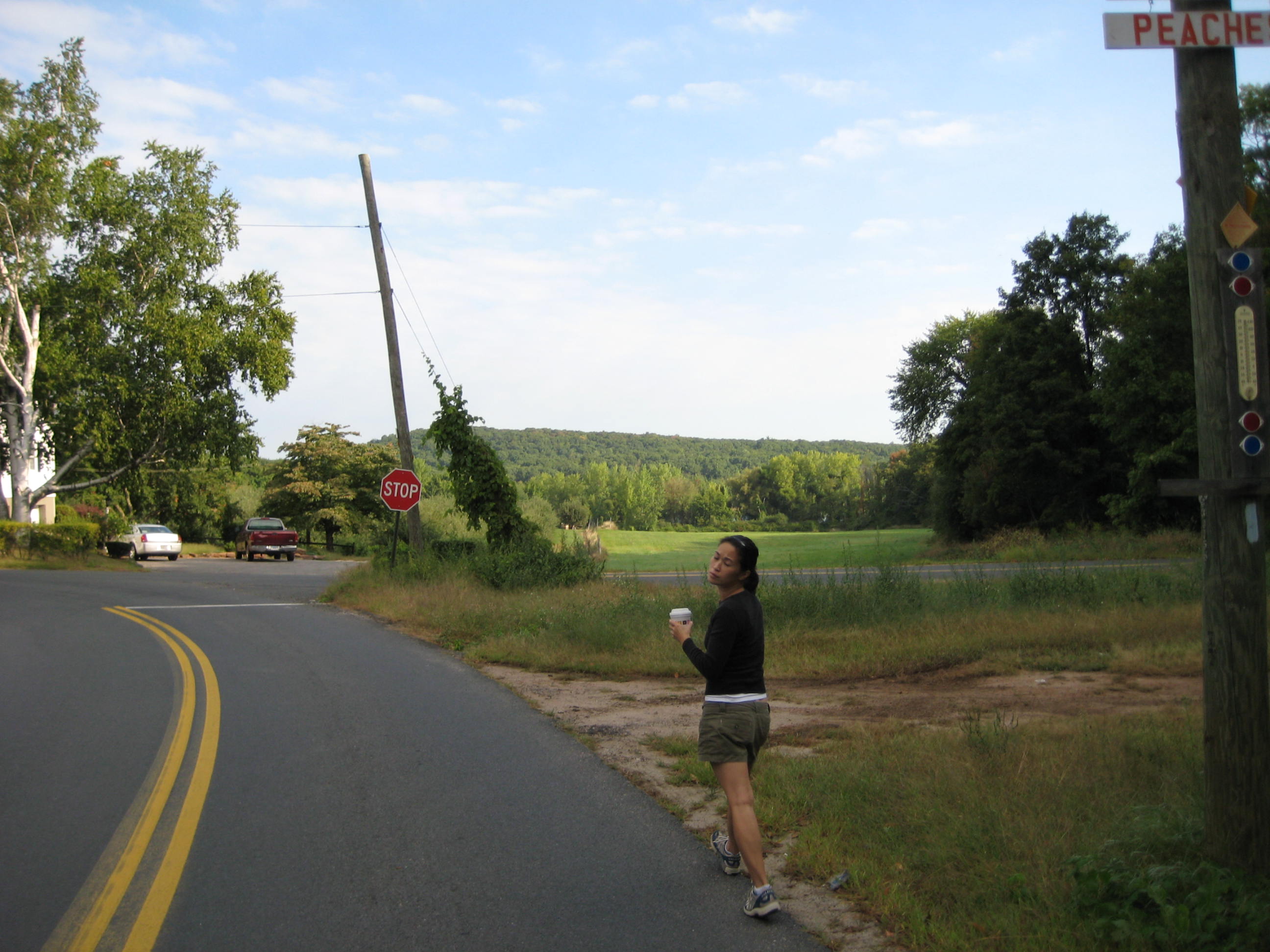 We wound our way along the road with the smell of apples thick in the air. Autumn was right around the corner and many central Connecticut towns had their Apple Festivals coming up in the next several weeks. There were literally thousands of apples at arms length, but we stuck to our morals and didn’t touch. Isn’t there a famous story somewhere about that? 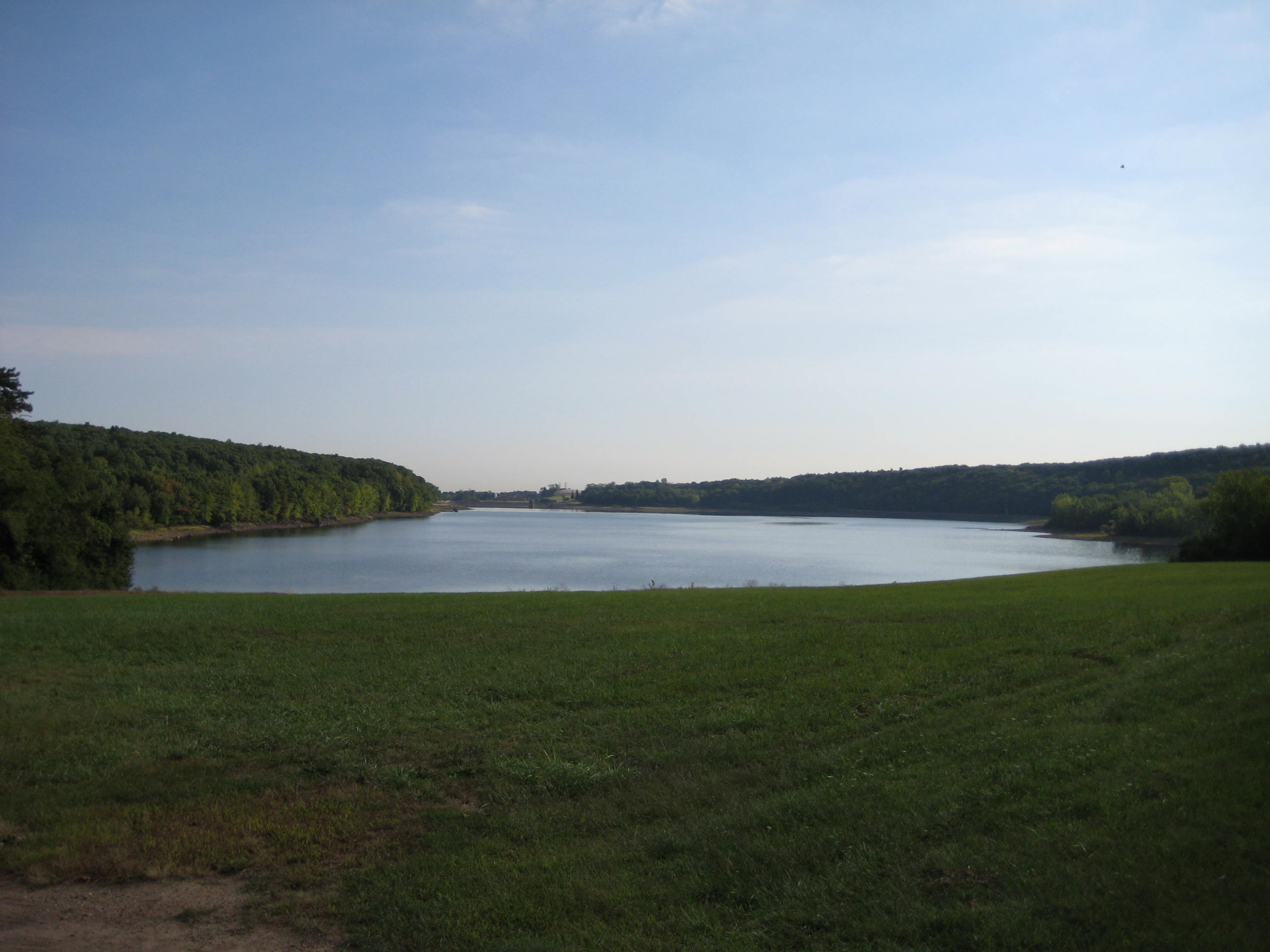 You can see it was a beautiful early morning to be out for a hike. We soon came upon Rogers Orchards which I’ve read about in others’ Metacomet reports. When open, it’s like an oasis; fresh apple cider, homemade pies, and, of course, apples. 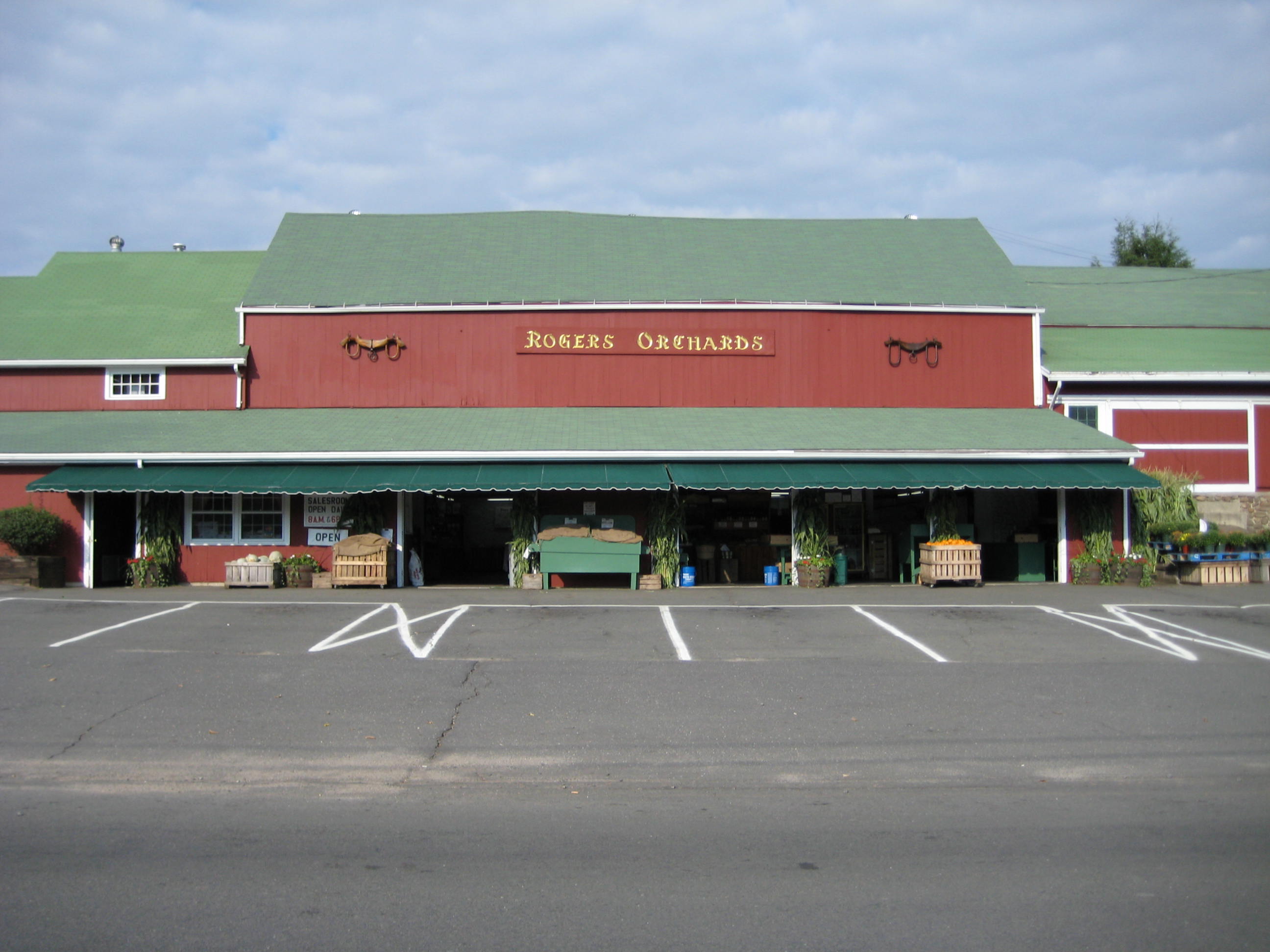 We passed a sign along the road announcing “Fresh Daily Donuts.” Hoang began drooling and suggested we just hang around for an hour or so until they open.

“Ahhh, no. We have to come back here to pick up our car and we’ll get your donuts then, baby,” I replied. She reacted thusly: 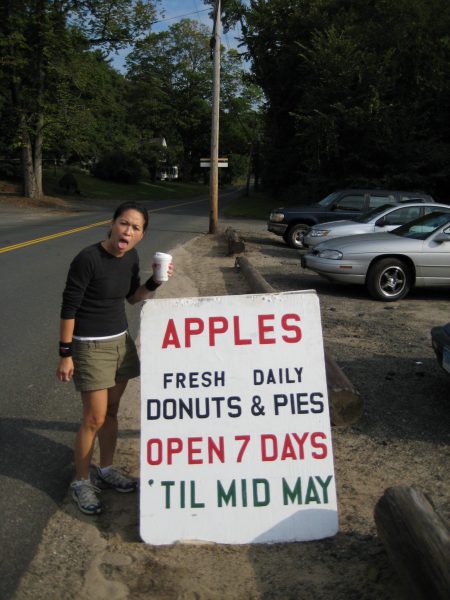 We continued on. Onward past more apple trees for as far as the eye could see. Old, old apple trees but with plenty of viable fruit. After once again contemplating eating some forbidden fruit, We came upon a thorny tangle and… 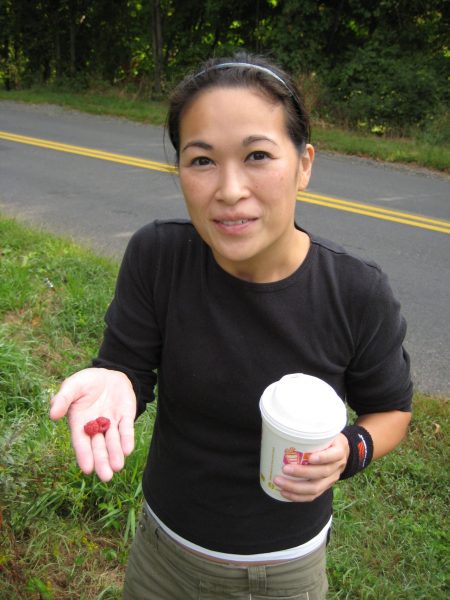 Yes, it’s true. We began our hike with Dunkin’ Donuts coffees in hand. Hey, when you’re road-walking, why not? It doesn’t make us any less hardcore. What if I told you they were black coffees at least? Let’s get into the woods already! 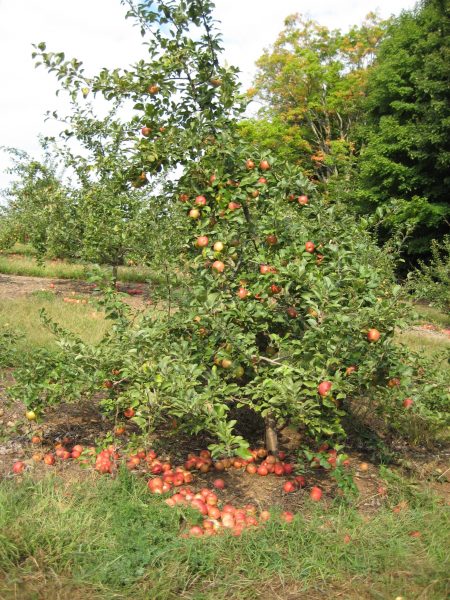 The trail crosses through a three-way intersection at the bottom of a hill and enters the woods via an old, rocky, overgrown road. We climbed steadily through an odd forest, full of young, skinny trees and lots of thick and twisty vines. It was obvious that this area was clear-cut not too many years ago as there were no mature trees at all. The fact that we crossed and re-crossed and followed several different old woods roads also tells me that this was once a cleared area. Some of them, apparently, still somewhat driveable – even if they were so bumpy your doors would fall off, literally: 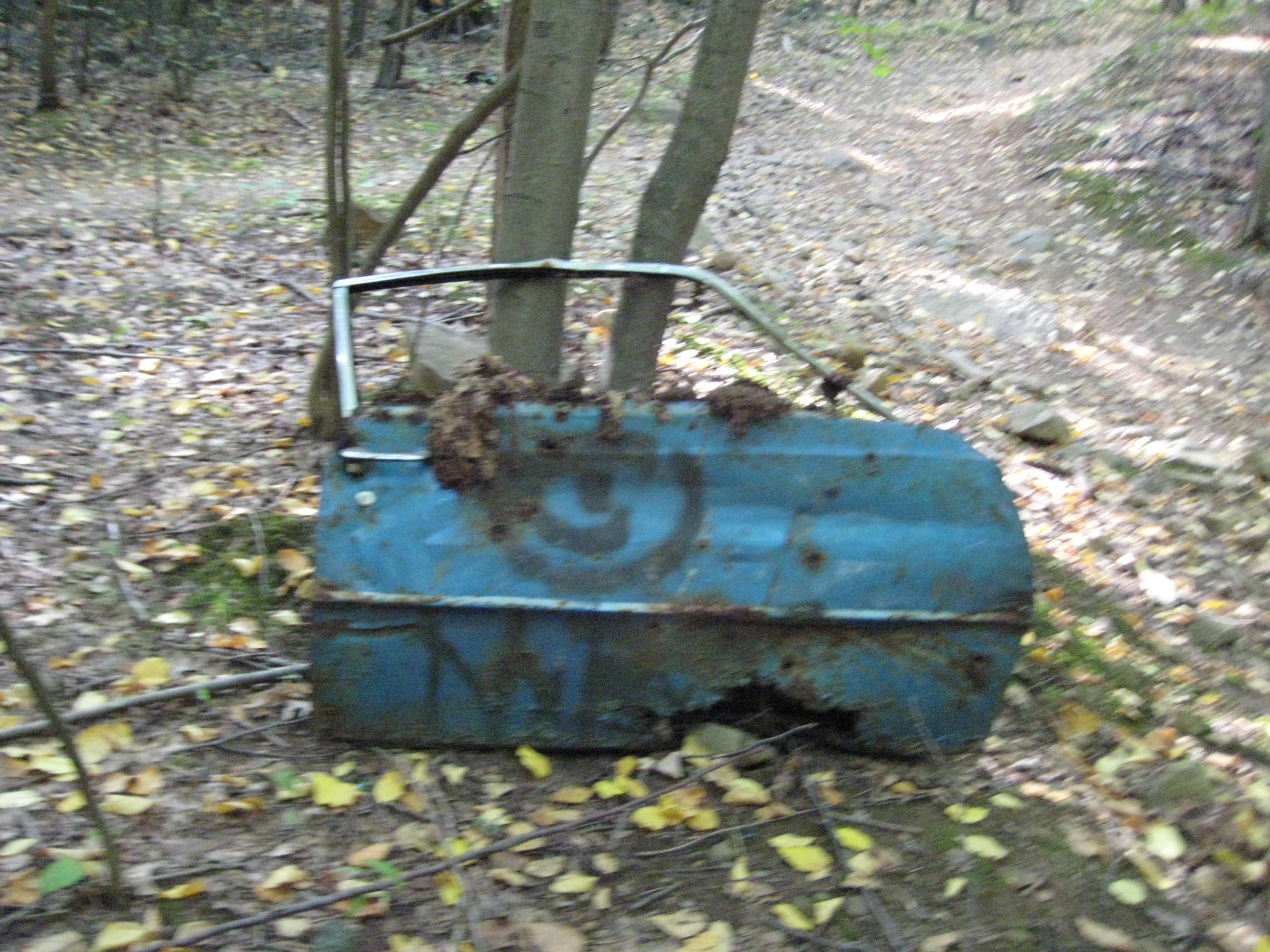 The trail continued ascending slightly and the tangle of old roads and dirt bike trails is a bit distracting here. Then it was up a very steep (and very short) climb up through a split boulder. Wow, that was cool… In fact, for the next several minutes, the trail wound it’s way through several other split basalt formations. The trail blazer certainly sought out as many as he or she could find to make this section as fun as it could be. 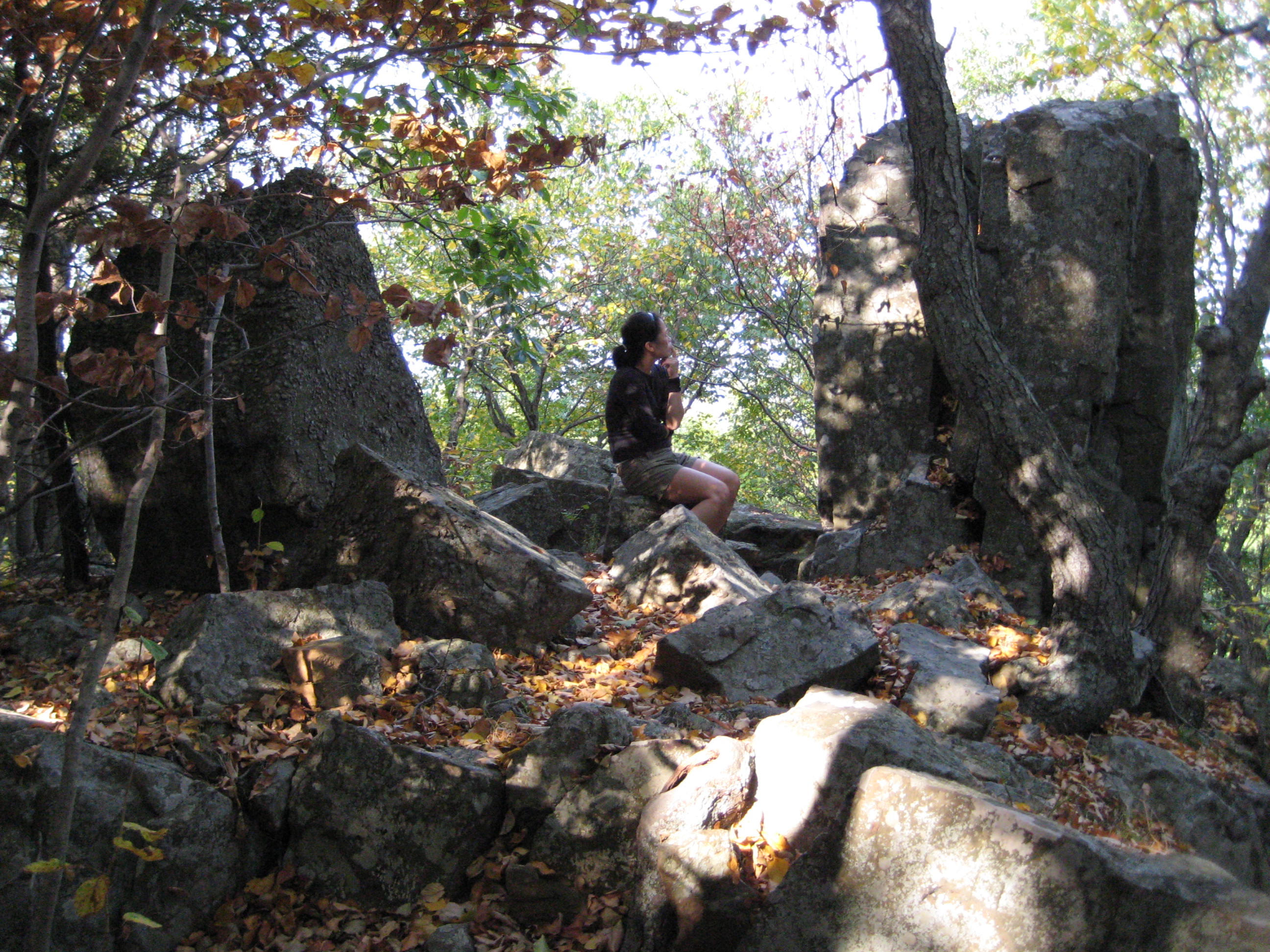 We reached the ridge-top and couldn’t help but notice a massive old fireplace. Also very noticeable were orange blazes as well as green blazes mixed in with our familiar blue blazes. The orange ones are a loop trail that heads down to Southington’s Crescent Lake and the green ones, I think, are a park boundary. There were areas where it looked as if a three-way paintball game had taken place up there. 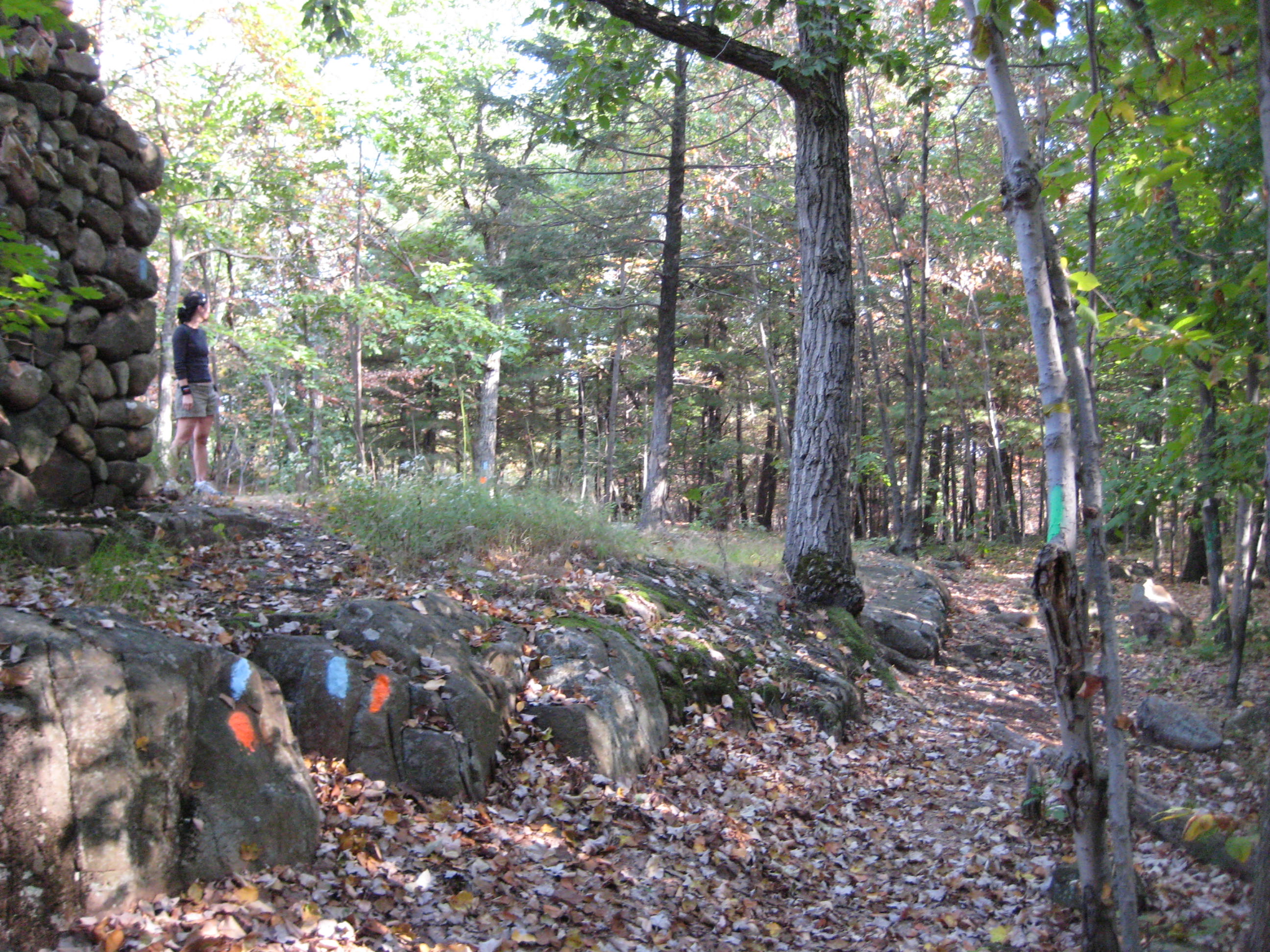 The fireplace sits atop a downright beautiful outlook. That would be this one: 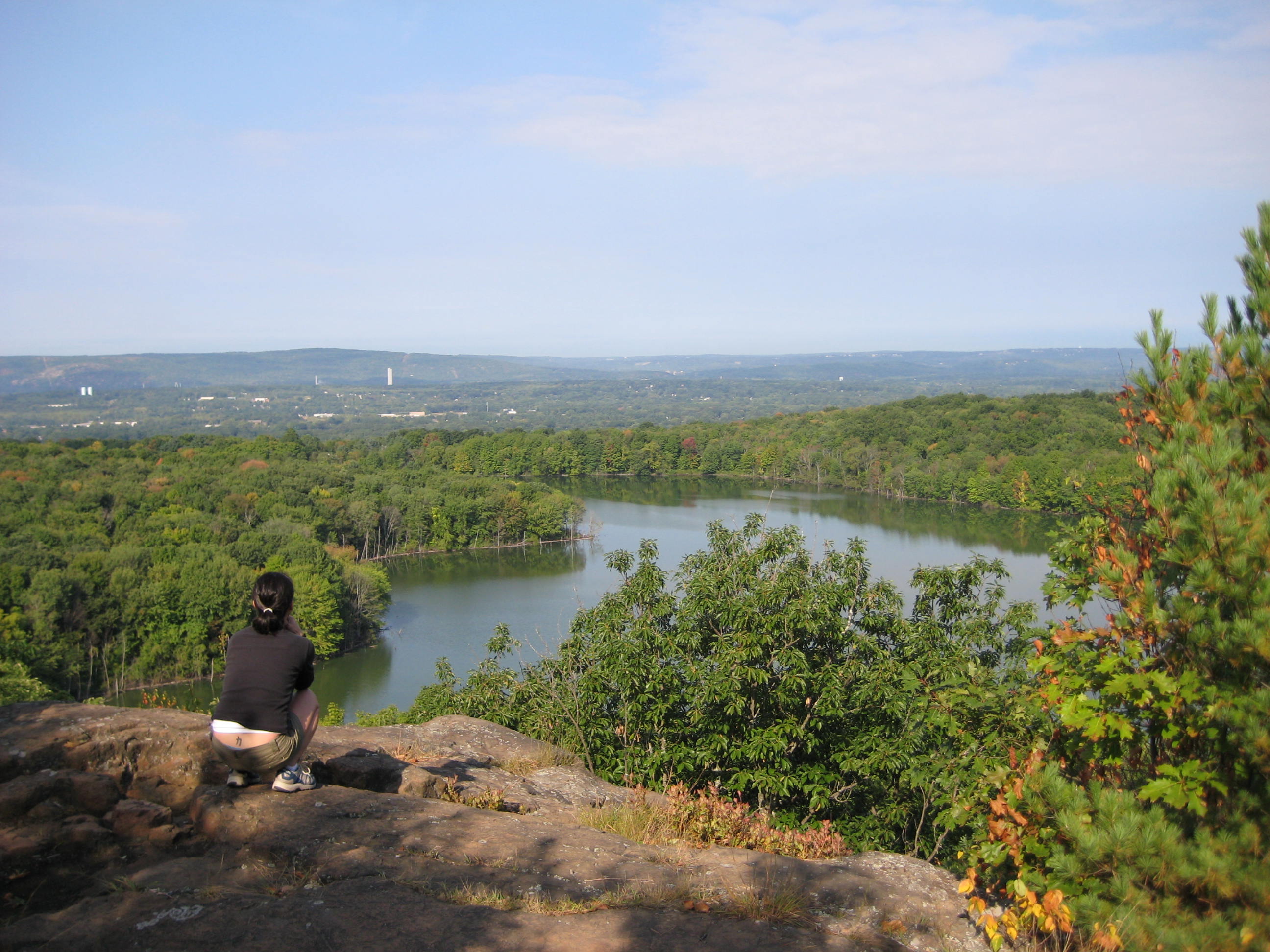 The trail continues along the ridgeline above Crescent Lake and takes in several more nice views. One of them is called Sunrise Rock and strangely, I only have a picture of the rock itself, rather than the view. (Sunrise Rock is perched above Sunset Park, by the way.)

Perhaps at this point I figured we had enough “Views of Hoang or Steve’s back gazing out upon a body of water view.” So you get a rock with graffiti on it instead: 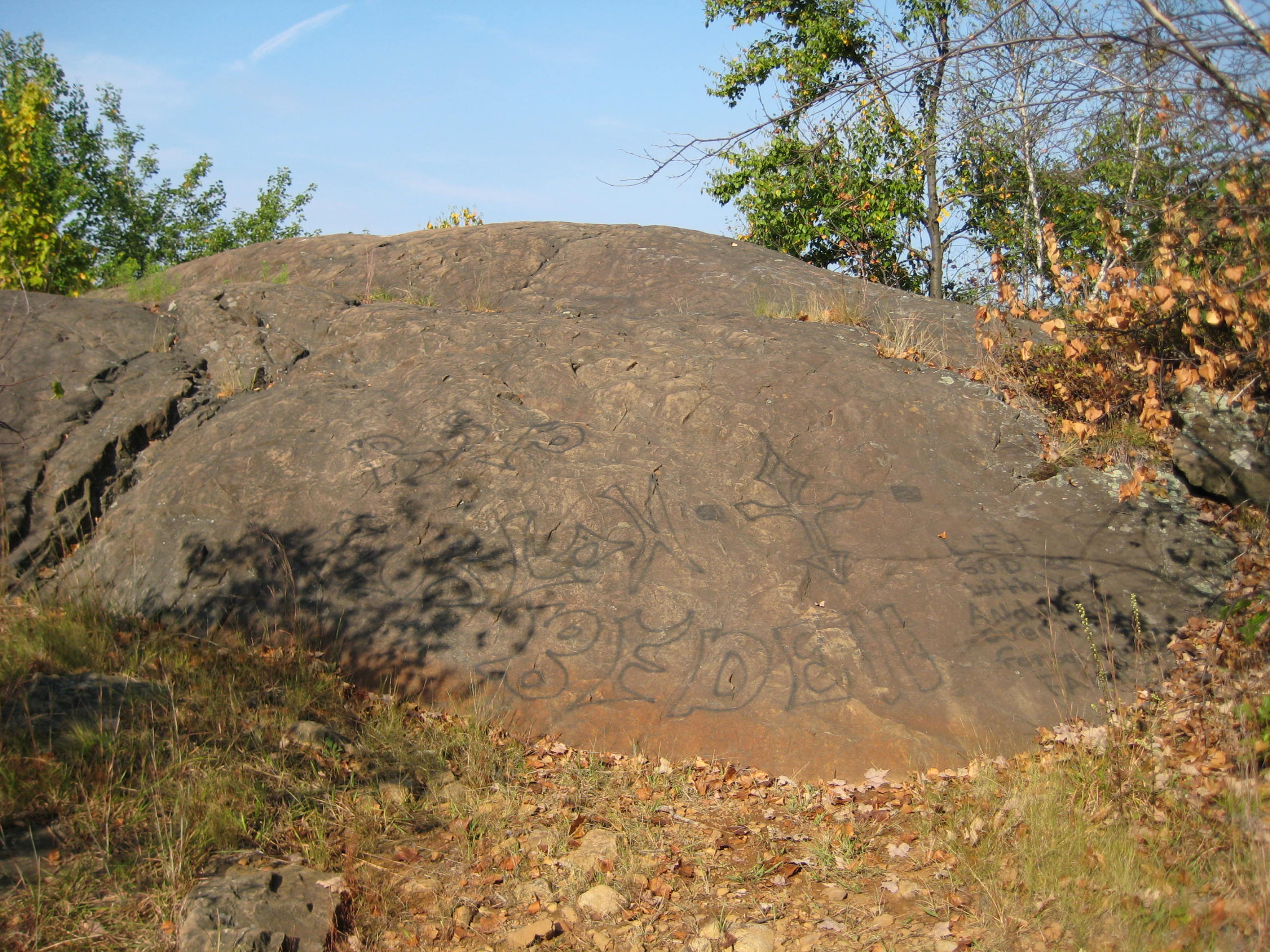 From there, the trail tracks northward, often on bare rock. At one point recently, a deadly super-poisonous snake sunned itself on one of these bare rocks and shed its skin: 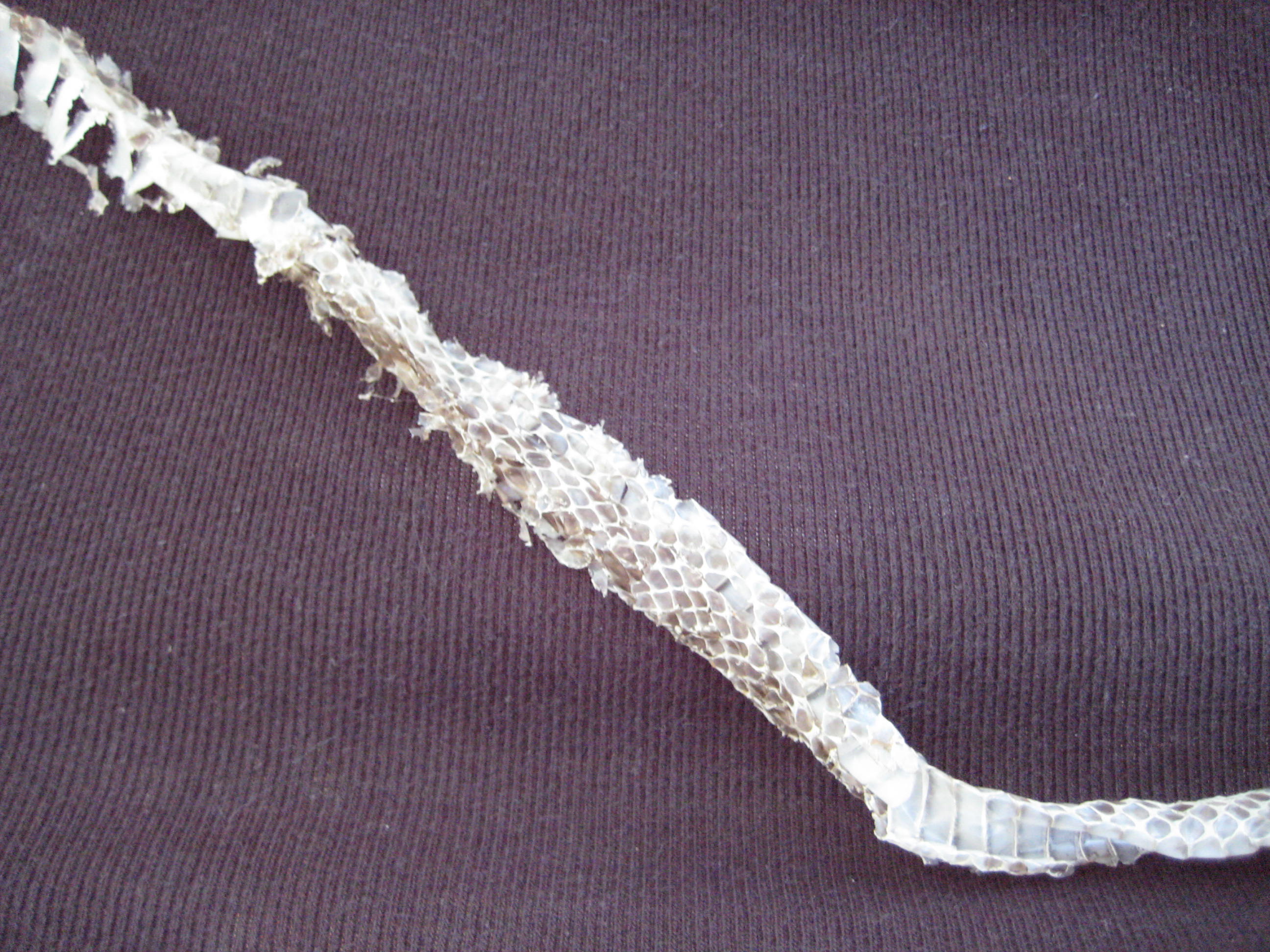 No. And I’m just kidding about the poisonous part. You didn’t really believe that, did you? Even if the next section will have us climbing up and over Rattlesnake Mountain, I’m fairly certain that’s a Common Garter or black rat snake skin. But don’t tell Hoang that… After a turn west and another short little climb, we summited Bradley Mountain (I like to mention the named climbs along the Metacomet, as there are so few) which was really a very nice area. Open forest, interesting boulder formations, well-marked trail – this had been a great little hike.

Then, almost suddenly, we were treated to another great view, this time towards the South and of several hills we’d been over along our Metacomet Adventure. 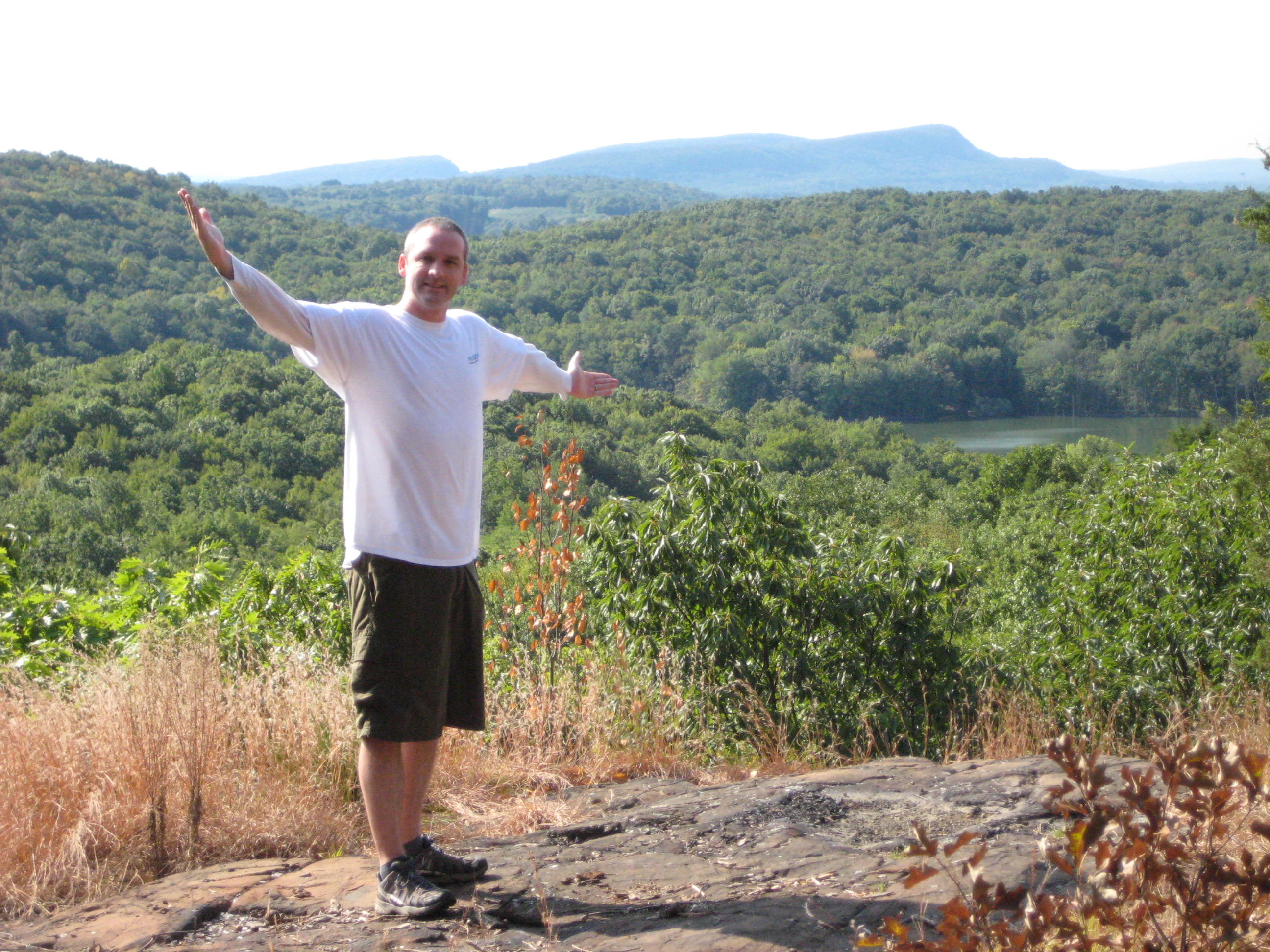 2017 Update: The trail was rerouted here and it is now much better than it was for us in 2007. Instead of taking us down to Ledge Road, it now heads off northeast, sticking to the woods before descending to Black Rock Road in New Britain.

What was the Metacomet is now the Ledge Road Connector Trail which I hiked again in 2018. You can read all about it here.

The reroute skirts the Tilcon Quarry and avoids the previous long road walk. Oh sure, you still have to go under I-84 and down 372 like before, but it’s much better now. I’ll now rejoin the old 2007 report where I’m looking hangdog after the long road walk. 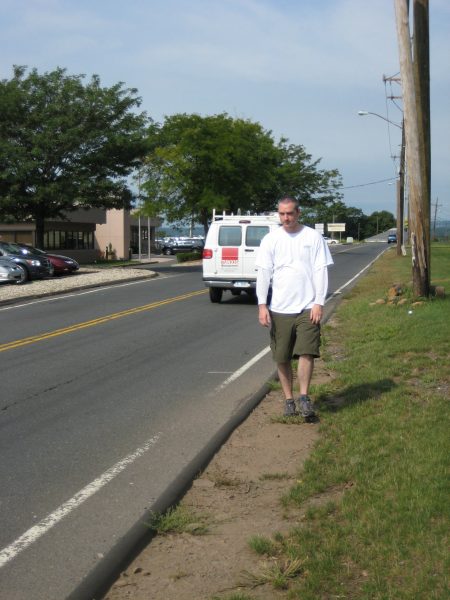 Oh, who am I kidding? I loved it! It’s stuff like this that makes the Metacomet so unique and fun! Hiking through a gas station lot? That’s awesome. We reached the turn off of Route 372 where the trail heads north and the next section. 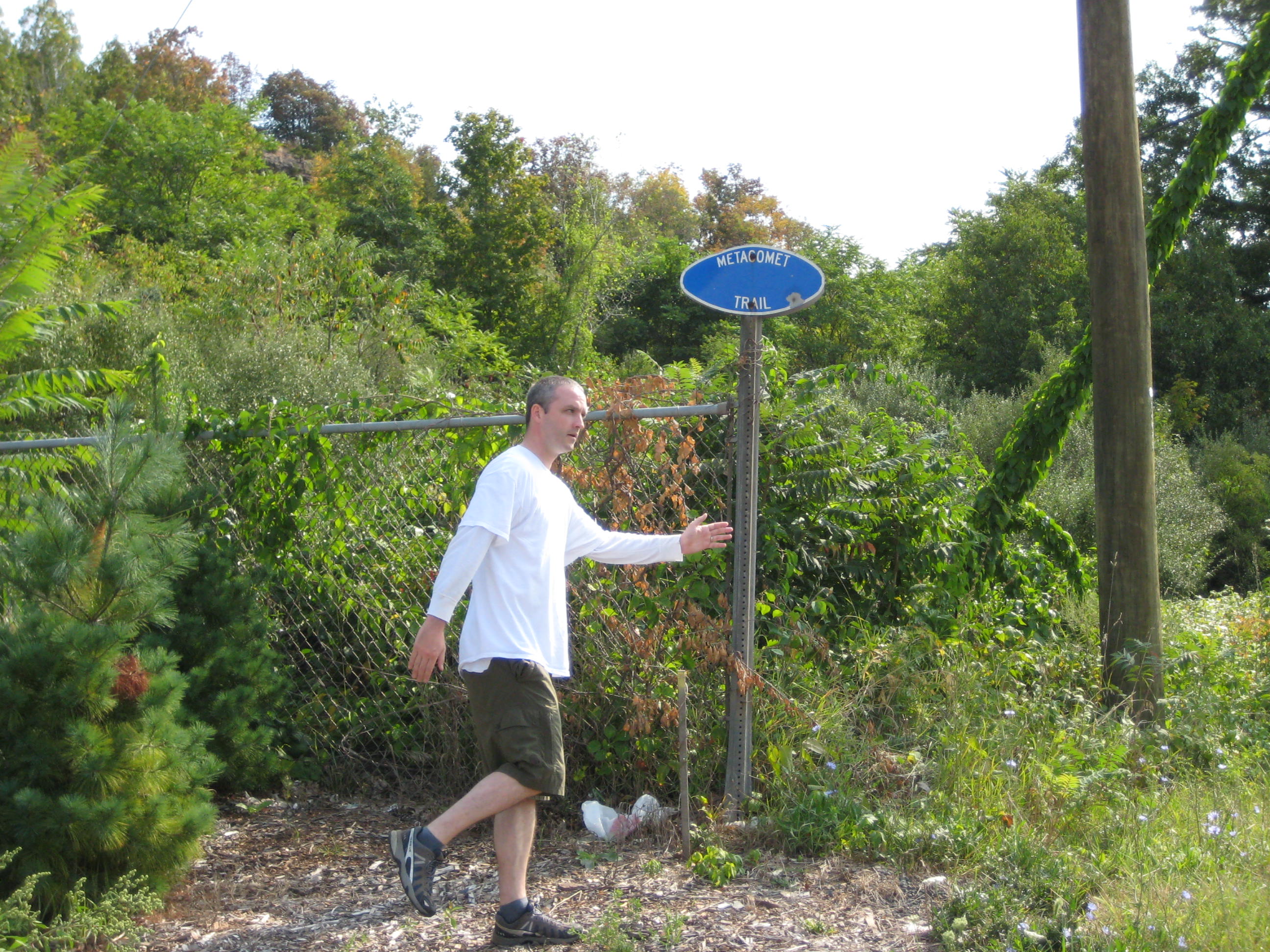 Postscript: We drove back to our other car and made the stop at Rogers, now open. What a wonderful place… It appears to not have changed much from the 1950’s. We bought a bag of Cortland apples (which Hoang made into a phenomenal apple crisp that night) and yes, a bag of “Fresh Daily donuts.” Apple donuts to be exact. And, I’m happy to report, Hoang was a happy girl: 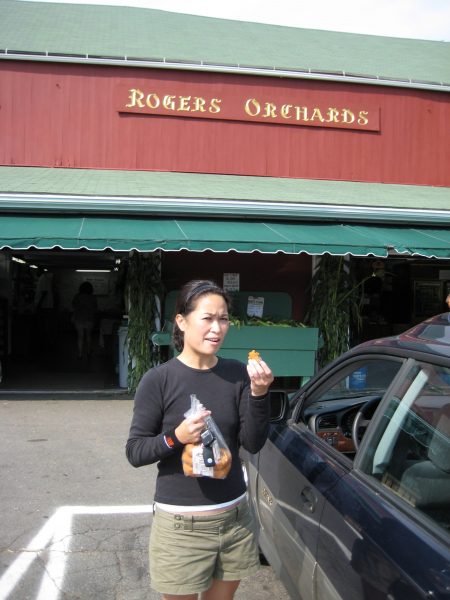 Continue on to Section 8: The Good, The Bad, and The Ugly