This is one of those stops along the Freedom Trail that has given me more to ponder than I would have ever thought. For one, it’s for sale which recalled (for me, and surely only me) another stop along the Freedom Trail up in Vernon – the Charles Ethan Porter House which was also for sale when I checked it out. That day, I saw that house and then found a Freedom Trail grave in the cemetery down the hill. This day, we checked out this house and then a cemetery site down the hill. Which made me think about two other stops: the William Winters House and neighborhood in Deep River and the Jail Hill neighborhood in Norwich. 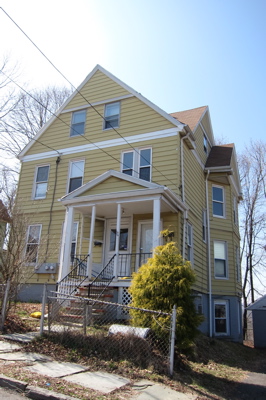 The common thread between these four places is that they are all on top of very steep hills. Why is that? Is it because this was the only place blacks could live in these towns and not disrupt the community? That they were the most undesirable swaths of land? I don’t know, but I do know that this hilltop in Meriden affords a pretty cool view of what is now Castle Craig up on East Mountain – and I’m sure it was a much prettier view 100 years ago. So here’s the blurb from the Freedom Trail site:

George Jeffrey (1830-1906) was a leading activist on the state and national level for civil, economic, and political rights and equality for African Americans. He was president of The Lincoln Colored People’s Association of Meriden from 1878 to 1886. The Lincoln Club was established both to honor Abraham Lincoln and to work to advance civil rights and equality of opportunity for African Americans. His single greatest achievement was spearheading the campaign that led to the Connecticut General Assembly in 1887 passing into law “An Act to prevent Discrimination by Life Insurance Companies Against Persons of Color.” Jeffrey was a man of stature and influence among African American members of the Republican Party, as demonstrated by his activities at the Republican National Convention of 1880. The house at 66 Hillside Avenue is the only surviving property known to be associated with George Jeffrey.

Which leads me to the other thing this made me think about. I perform research for the life insurance industry for work and we produce reports on racial differences in consumer behavior. Did you know that the highest ownership of “life insurance products” are African-Americans? But what’s interesting about that is that the large majority of those products are small policy “end of life” services like coffin and funeral expenses and nothing else. These types of insurance products are heavily marketed to the black community and quite frankly, they are not such great products. (For a little bit more in premium, a purchaser can get a LOT more benefit from life insurance.)

Oh, I could write more, but that would just get weird

There we were again… the four of us driving slowly around a cemetery looking for a particular grave site so I could hop out of the car and snap a quick picture for this little thing you’re reading right now. Fortunately, the Freedom Trail folks were kind this time and gave us a very good set of directions to find what we were looking for. Of course, the cemetery – as cemeteries are wont to do – like to be very subtle in their mapping so we still wandered around a bit before finding our bearings and ultimately, the grave site in question. 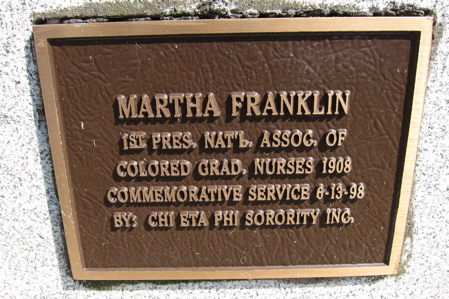 Martha Minerva Franklin (1870-1968) was born in New Haven. She attended high school in Meriden and graduated as the only student of color in her class. Not accepted to Connecticut nursing schools because of the color of her skin, she attended the Women’s Hospital Training School for Nurses in Philadelphia. She graduated in 1897 – once again, as the only African American in her class. In 1908, she founded the National Association for Colored Graduate Nurses (NACGN) in New York City, because at the time, black nurses were not accepted into the American Nursing Association (ANA). Franklin worked tirelessly as the NACGN’s first president to break down the color line in the field of nursing. After years of dedication, Franklin saw her goal of integration realized when the NACGN merged with the ANA in 1951. She was posthumously inducted into the ANA Hall of Fame in 1976 and the Connecticut Women’s Hall of Fame in 2009. Her name was not added to the Franklin family gravestone until 1998, after a concerned nurse discovered that there was no recognition of her interment there. With an anonymous donation, a plaque was created and dedicated in a special ceremony at the Meriden site. The location is C-West, lot 298. Enter the South gate and follow the drive to the left. Section C-West will be on the right. The Franklin family plot is halfway up the hill and stands out from other markers because of the plaque on the stone. 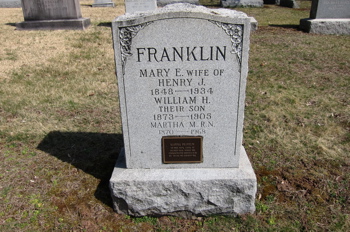 It IS true that it does stand out, but it’s not exactly a shining beacon. But I found it. Do I care about Martha Minerva Franklin? No, not particularly. Do I have an affinity for cemeteries? No, not at all. Do I enjoy the thrill of the hunt while one child is sleeping and the other is whining in the back seat while Hoang patiently indulges my nonsense as long as there was a promised Dairy Queen Blizzard upon completion? You bet I do. And when I find what I’m looking for… Bliss.