I doubt very much that you are familiar with the New England Forestry Foundation. I sure as heck wasn’t before embarking on my years-long effort to list every legitimate trail in Connecticut. The NEFF covers all of New England, just as their name would suggest. Here’s more:

A hike through a New Hampshire forest in the fall, a Vermont barn made from locally milled trees, and the clear, clean waters of a Maine river—these are just a few of the many gifts that New England’s forests offer. Across the region, forests provide timber for construction, local jobs, wildlife habitat, clean air and water, and recreational opportunities. These benefits support a vibrant and thriving region, and New England Forestry Foundation (NEFF) works to protect them for future generations. 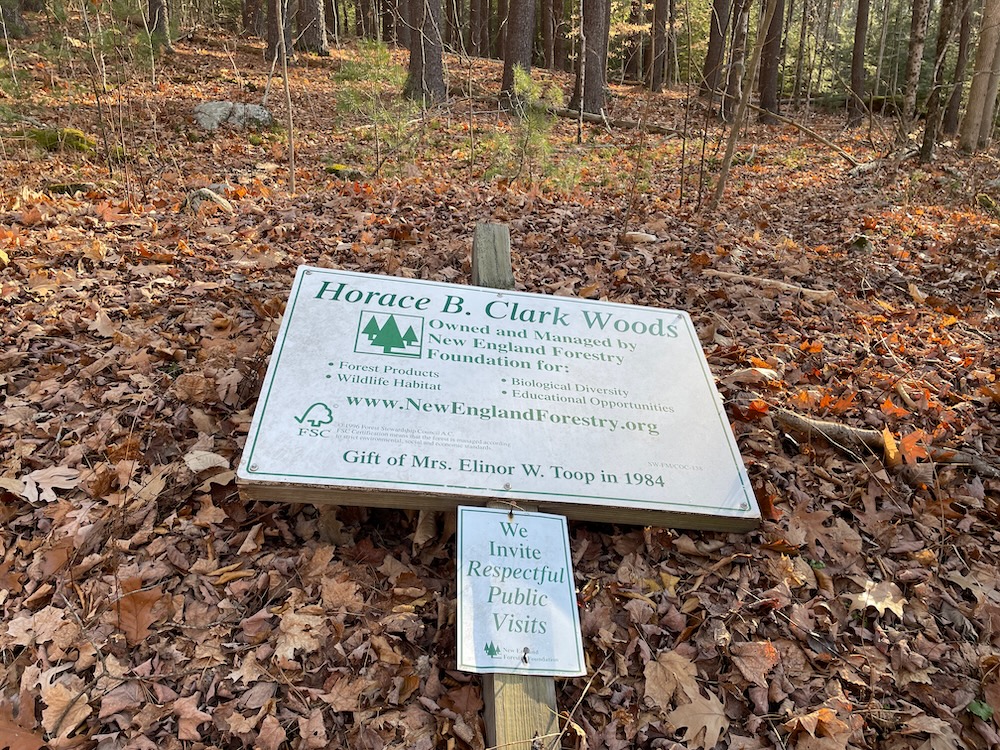 Sure, the romance of New Hampshire, Vermont, and Maine is deeper and richer than Connecticut… generally speaking. But have you ever driven the back forest roads of Hartland? Exited your car and trudged up a steep hillside through tall pines and birch trees with no sound but leaves crunching beneath your feet?

Because if you have, you know that this part of our state really isn’t too far afield from the Vermonts and Maines of our world. Hartland is a wild place, man. Wild. 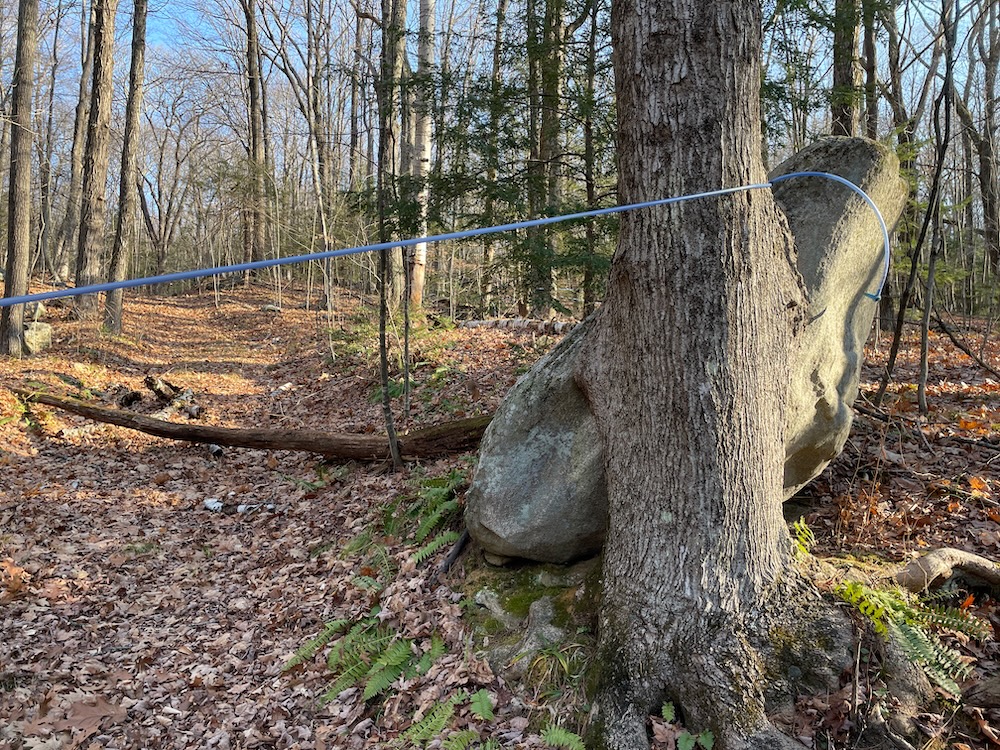 The NEFF holds four parcels in our little state as I write this in late 2022. To get to Hartland’s, you travel on progressively skinnier and windier roads away from civilization. Past Lost Acres Vineyard in Granby and onto North Lost Acres Road. Horace B. Clark Woods straddles both sides of this road and there are two mapped trails.

Mapped trails. Which is very different from actual trails.

This abandoned farmland in Hartland was donated in 1984 by Mrs. Elinor W. Toop in memory of her uncle, Horace B. Clark. The parcel, which is adjacent to the Tunxis State Forest, became NEFF’s first Community Forest in Connecticut. The diverse forest of large white pine and mixed hardwood has been thinned carefully several times. The resulting growth of lush understory vegetation has created superb wildlife habitat. 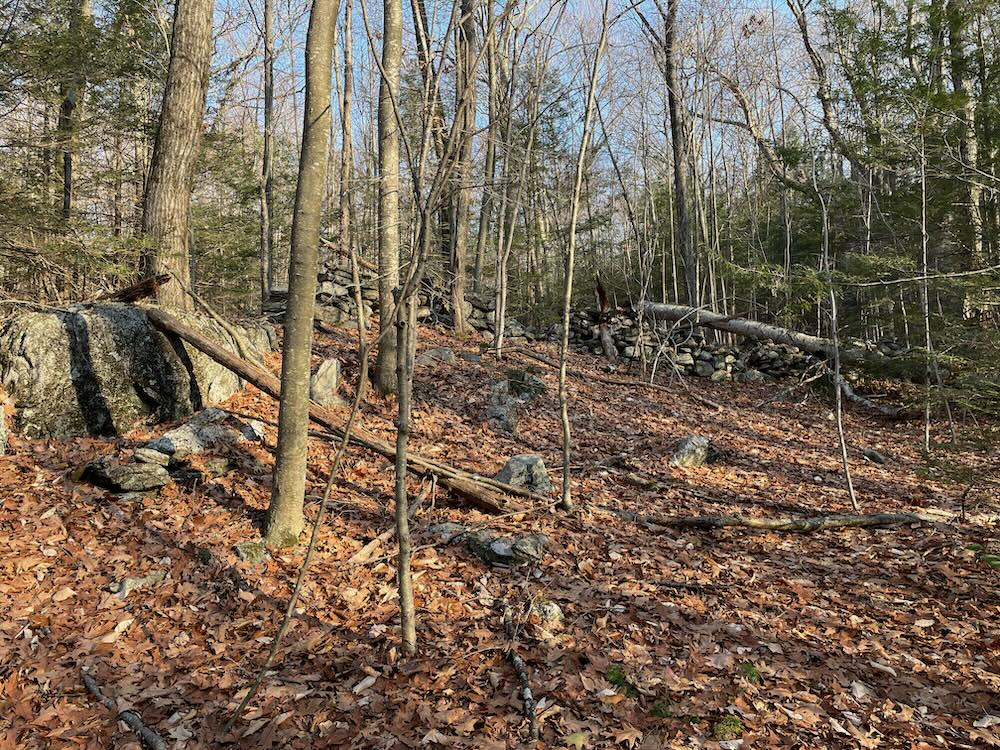 Ah. As forest managers, they are also timber harvesters. That’s just the way it is, and to be honest, at no point during my forays into the Clark woods did I see an evidence of a recent harvest. In fact, I hardly saw any evidence of a human being here for decades – other than an extensive web of maple sugaring tubes at the northern tip.

There’s a large pullout for parking near the intersection of North Lost Acres Road and Fuller Road. This is supposed to be where the trailhead is, but I saw no evidence of a trail. So I drove further north; eyes peeled into the woods for a trail. 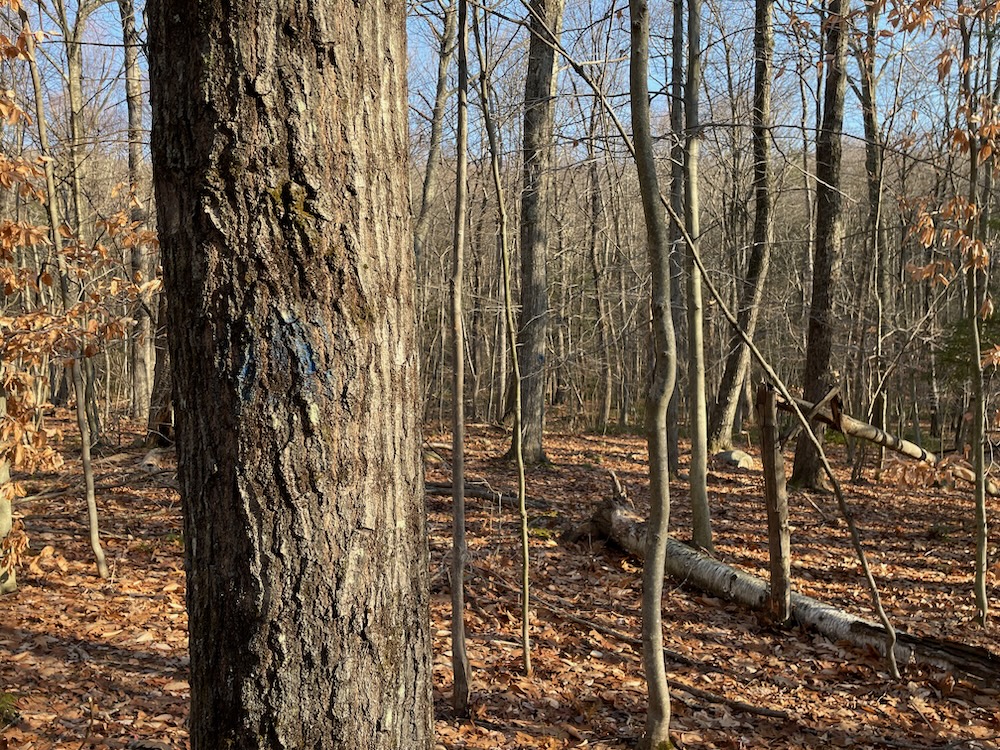 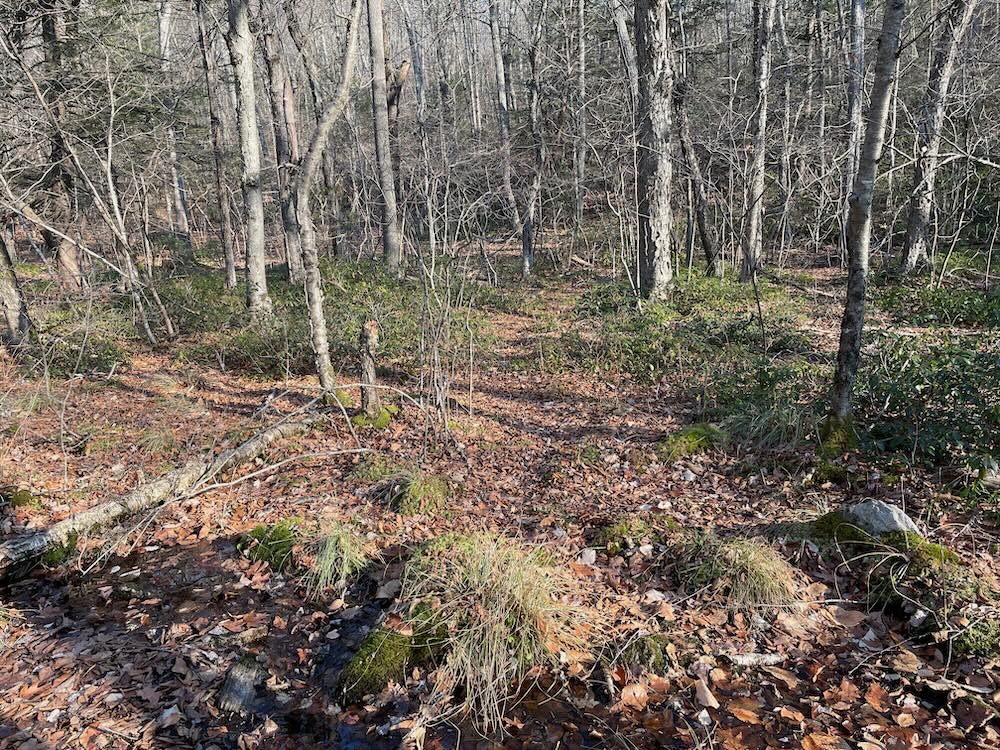 Aha! I found a sign! It was lying down, sure, but it was a relatively new sign. And there was what appeared to be an old woods road. I parked and began walking in the woods – even though this was nowhere near where the map said a trail would be.

I trudged up the hill. The “road” petered out in a thicket of laurel and I wandered around a bit, over to a mountain brook, and gave up and returned to my car.

I parked at the designated (but signless) lot and entered the woods where the NEFF map told me there’s a loop trail. The woods here are open enough, so kept walking. Then I saw it: a faded blue blaze. 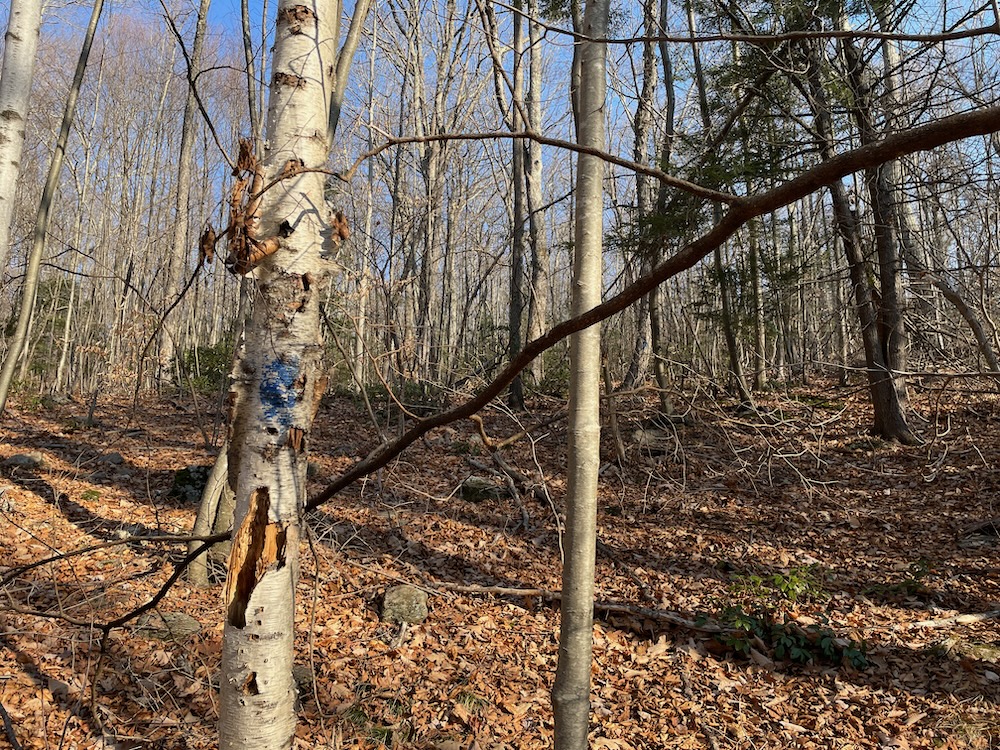 There was no cleared trail, mind you, but then I saw another blue blaze. Then another.

There were moments where I could discern that there used to be a cleared trail here and there, but I think I was imagining that. piecing together the blue blazes up the hill took me through laurel, thorns, and swampy areas. Still, I kept seeing blue blazes – some decades old and faded, some fairly new.

Straight up a steep hill I followed the blazes (but not a trail). It occurred to me that there was a very good chance I was following the Hartland-Granby border… except the blazes weren’t straight and that’s not how rural towns mark border. I crested the hill and… 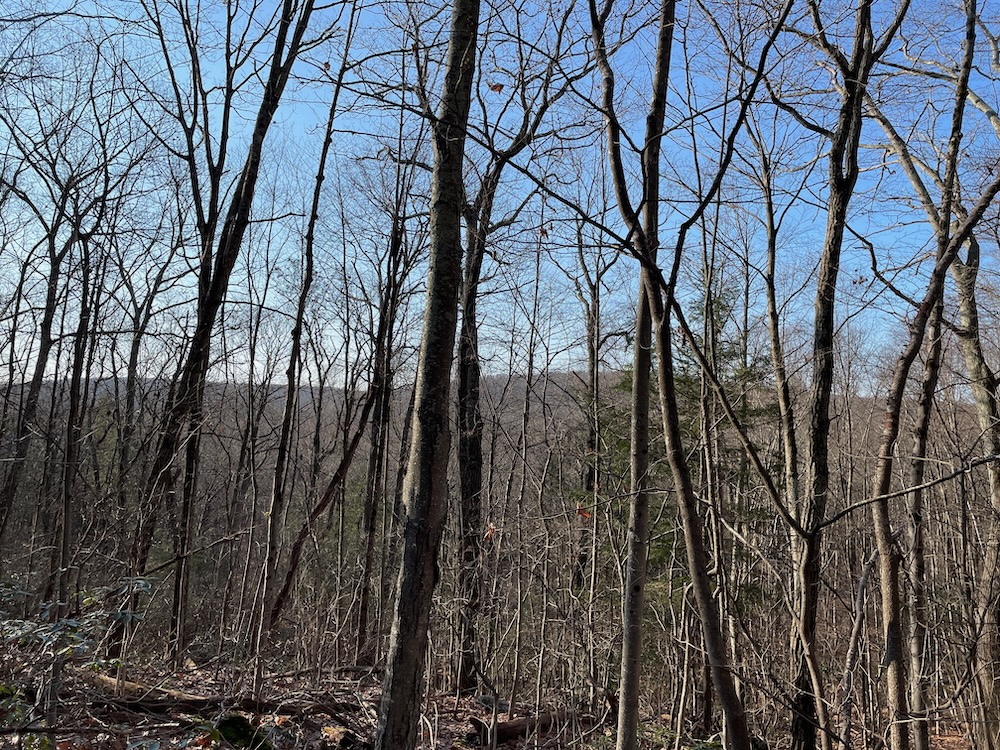 decided this was stupid. I wasn’t following a trail at all, I was bushwhacking in the middle of nowhere. I concluded the NEFF doesn’t keep up their trails and that that was fine. I’d seen enough and picked my way back down the hill to my car.

On to the second Horace B. Clark Woods trail off of Fuller Road! Which is a single lane dirt road with ominous warning signs: 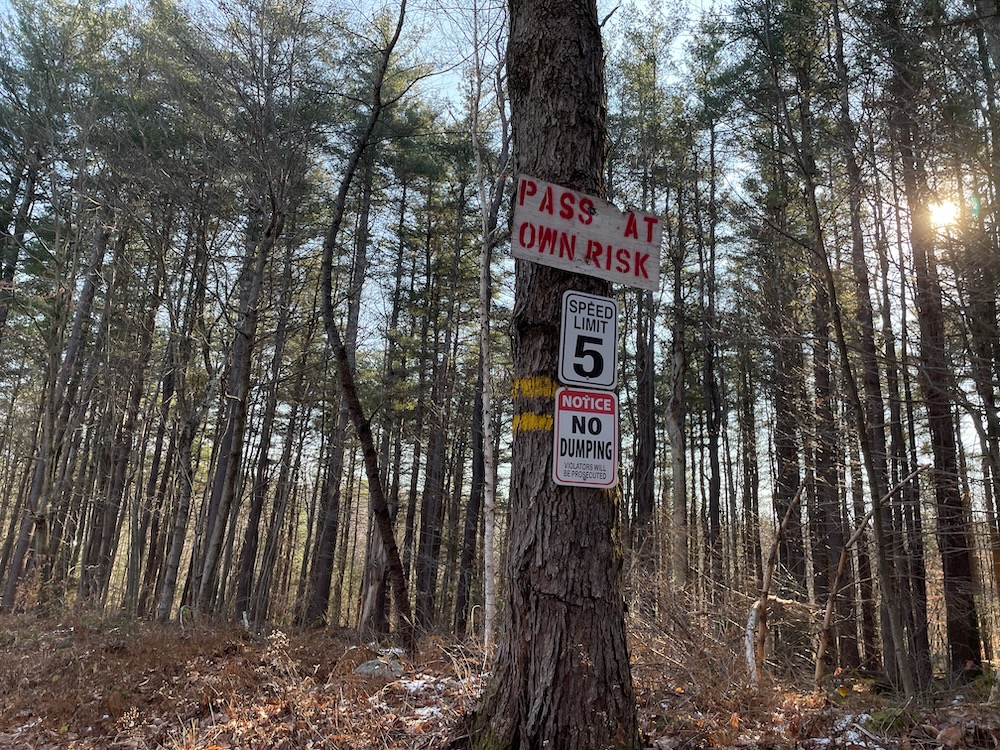 I was in a minivan and figured the trailhead was nearer the far end of Fuller Road, so I drove around and approached from that side. The road itself isn’t bad at all and when I drove up behind a pick-up truck with a trailing dog, I didn’t really know what to do.

The guy seemed to be walking his dog with his truck on a sketchy road miles from civilization. I simply followed behind him until he pulled off and let me pass. Of course, I really had no idea where to stop because again, there was no trail. 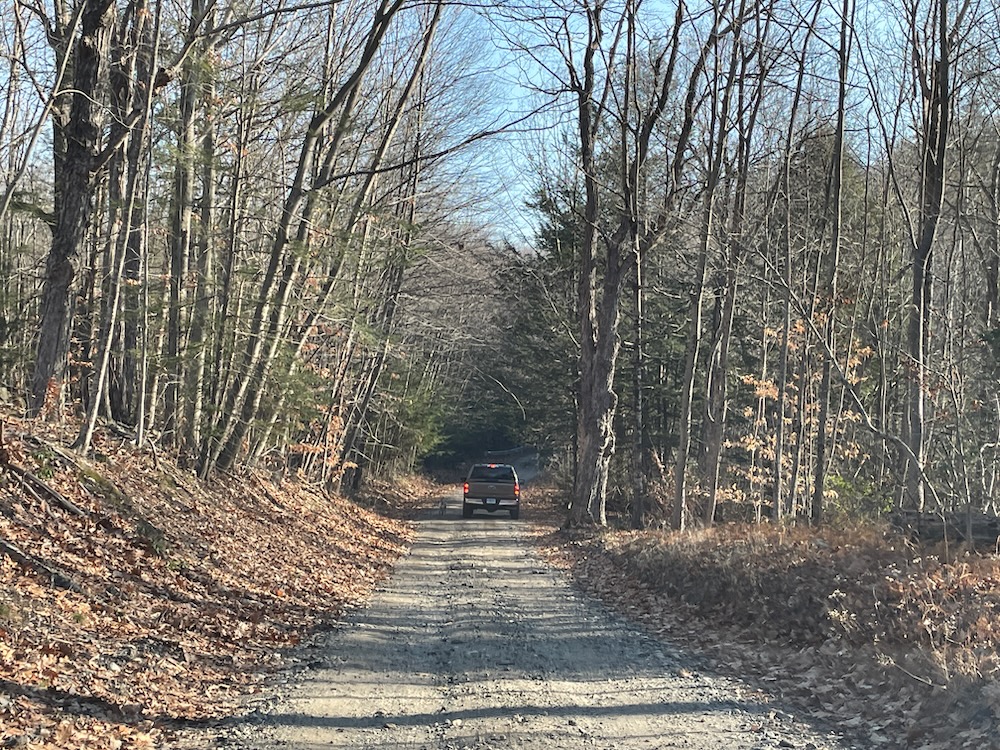 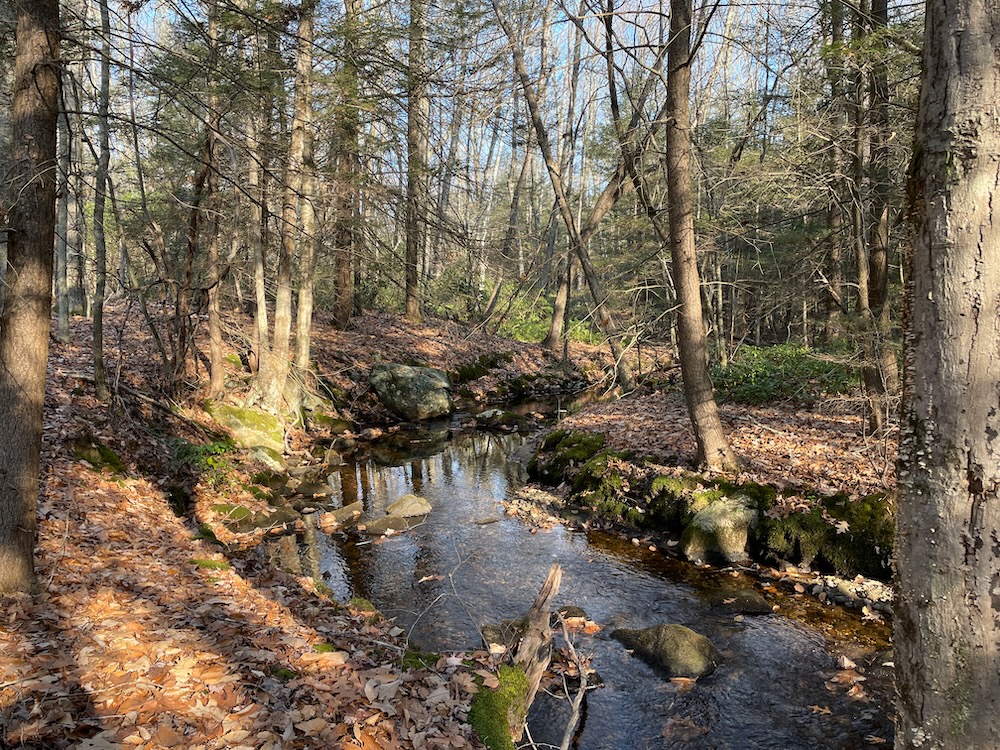 I estimated where it should be according to the map and repeated my previous exercise. I found red blazes this time that I know were not marking a trail, but I followed them anyway up a very pretty offshoot of Belden Brook.

This was again supposed to be a cleared loop trail, but I found nothing. I walked into the woods at two different spots and aside from a very odd pink tape trail to a squared off place with a little metal spike in the ground, I saw nothing – other than a nice, large patch of lovely woods. 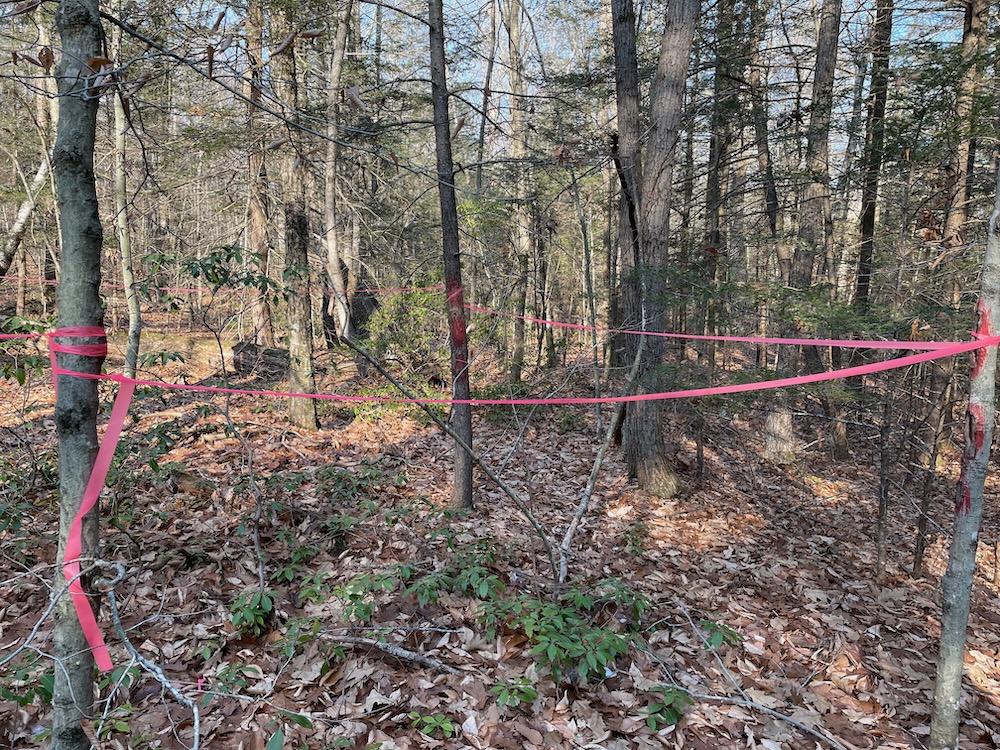 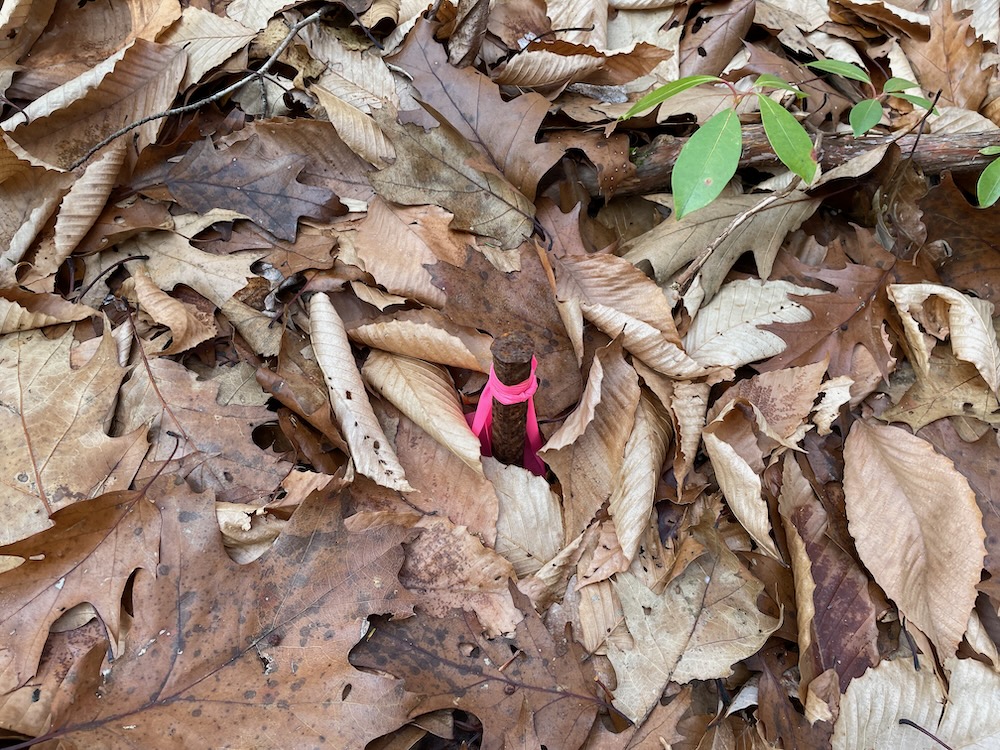 But you read it, and if you’ve read it hoping to go hike it, maybe I’ve saved you a couple hours of your life. You’re welcome. If you insist, here’s a map for you. Good luck! 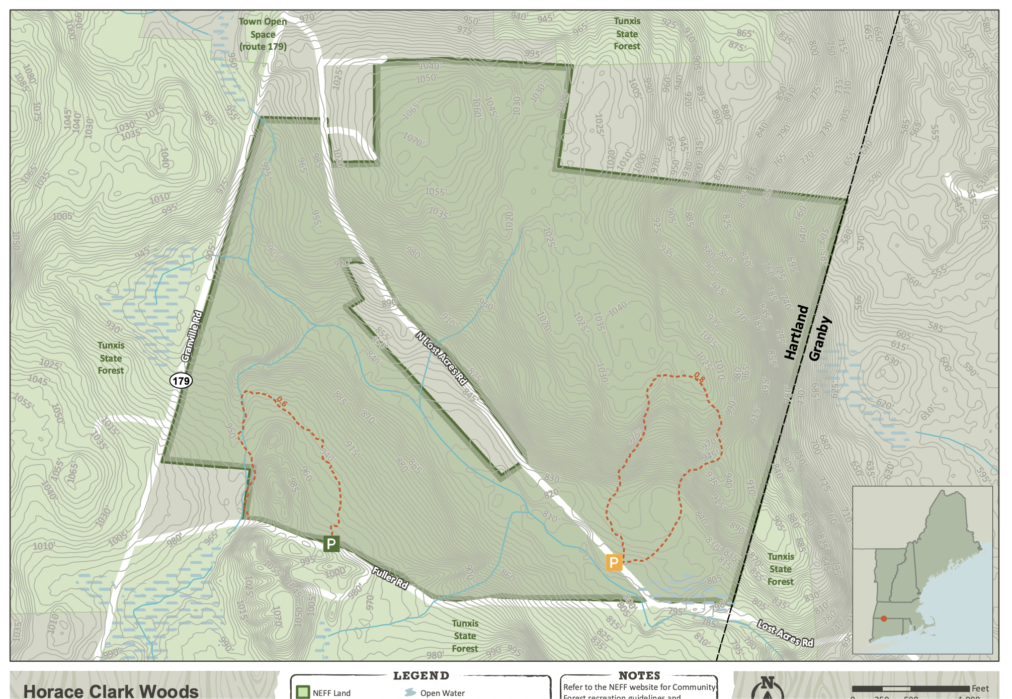 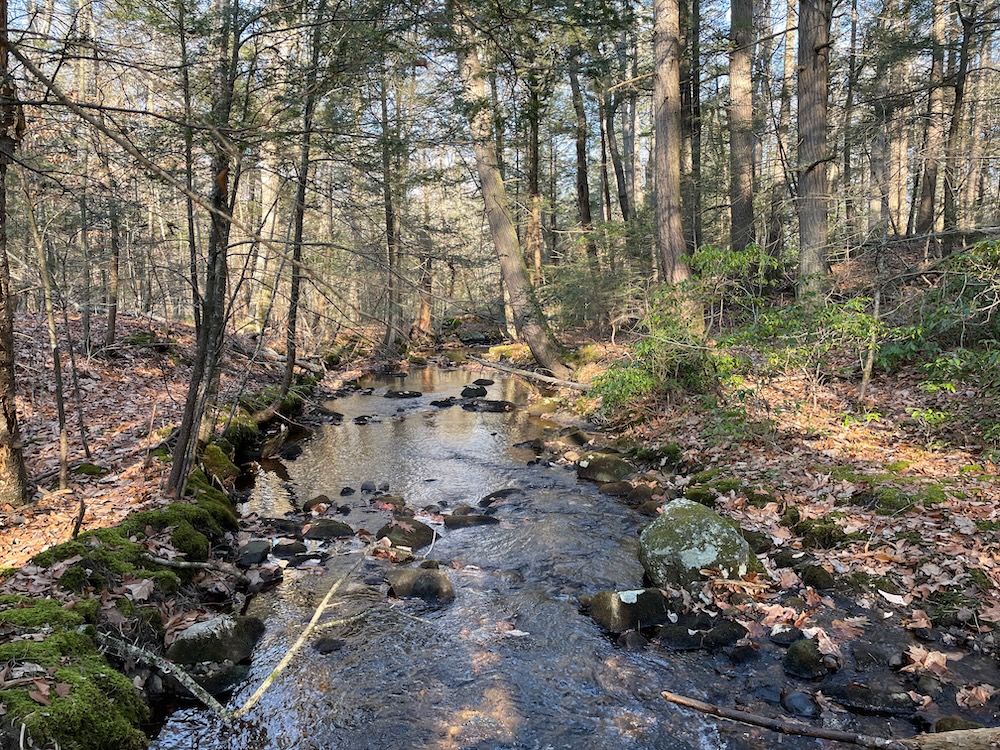 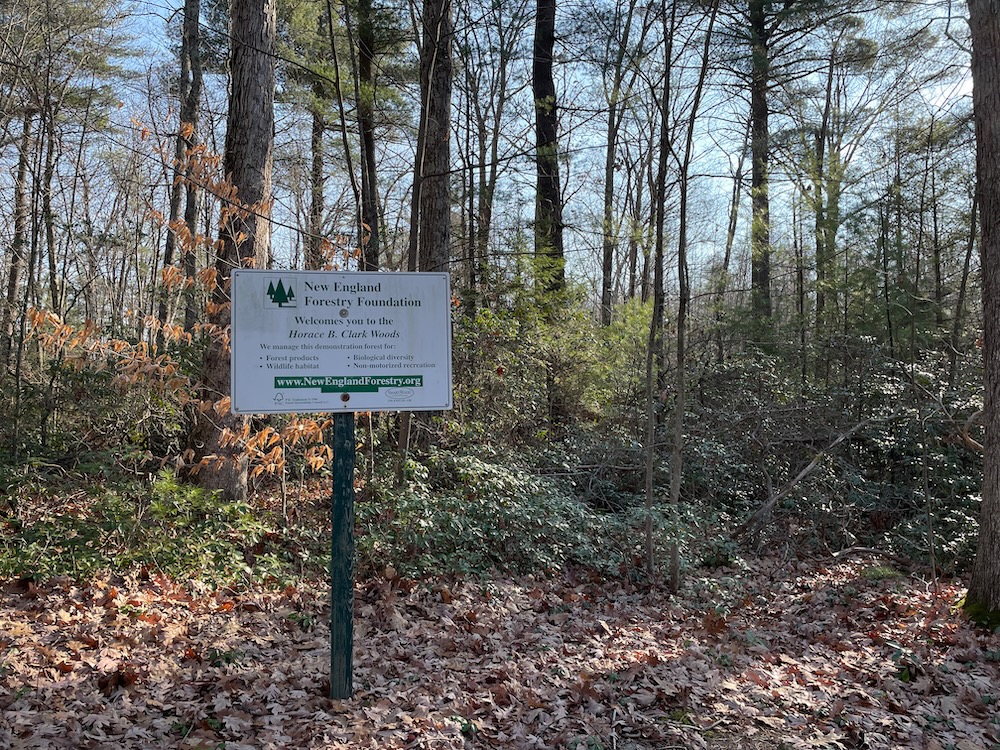