I often write that I am surprised by certain plucky little museums that contain much more interesting stuff than I’d anticipated. Everyone loves to be happily surprised. And after nearly 500 Connecticut museums, you better believe I’m happy to be surprised by them. But what happened to me while visiting this certain plucky little museum, though, was an order of magnitude cooler. 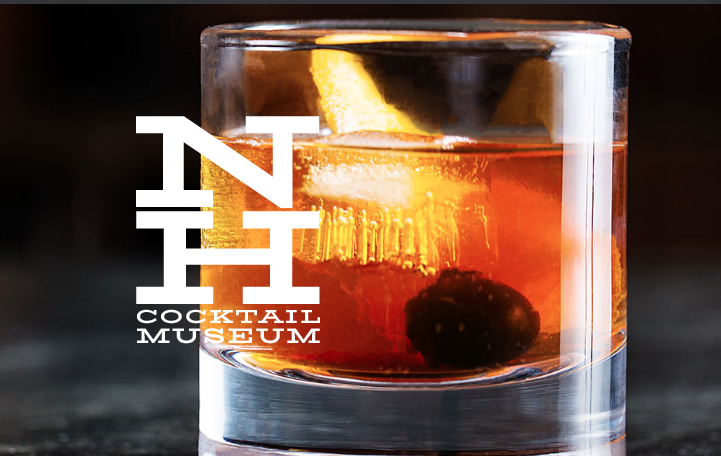 And it had nothing to do with the New Haven Cocktail Museum. The “museum,” such as it is, is an afterthought really. Of course, this page exists because of the little lobby display, so I must write about it. Even though it almost seemed like the owner/manager of Ordinary, the bar and restaurant responsible for the museum, didn’t want us to spend any time absorbing all it had to offer.

Even if that takes all of five minutes.

Hoang and I arrived after a delicious dinner at Atelier Florian, a few blocks away. We entered the lobby – and therefore the museum – and the door to the bar immediately opened and a gentleman named Tim Cabral asked us if he could help us. 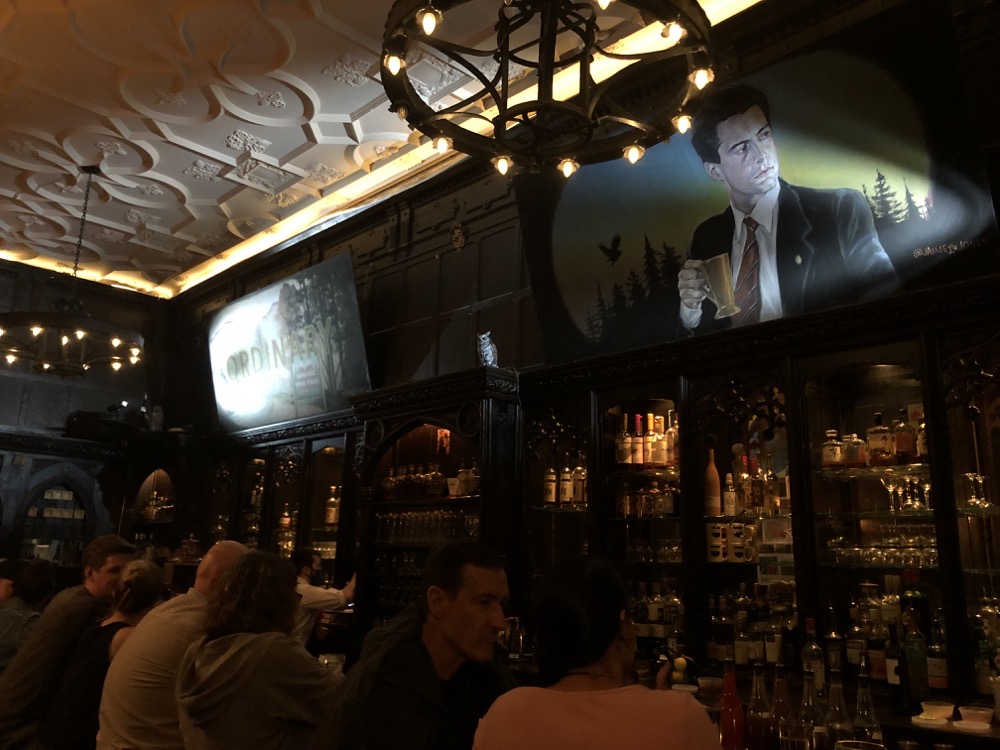 “Um, yeah, we have reservations for 7,” and before I could say, “but I’d like to absorb all the New Haven Cocktail Museum has to offer,” he ushered us inside. It’s all very speakeasy-like. Like we were gaining entrance to Yale’s Skull and Bones just a block away.

New Haven lovers of history and libations are invited to imbibe the new exhibit curated by New Haven historian Colin Caplan. Participants will travel through the history of the cocktails inception in New Haven and around the world. The tiny museum located in the historic front foyer of Ordinary. After checking out the exhibit, cocktails await as you enter Ordinary bar.

Or, in our case, after we enjoyed cocktails. 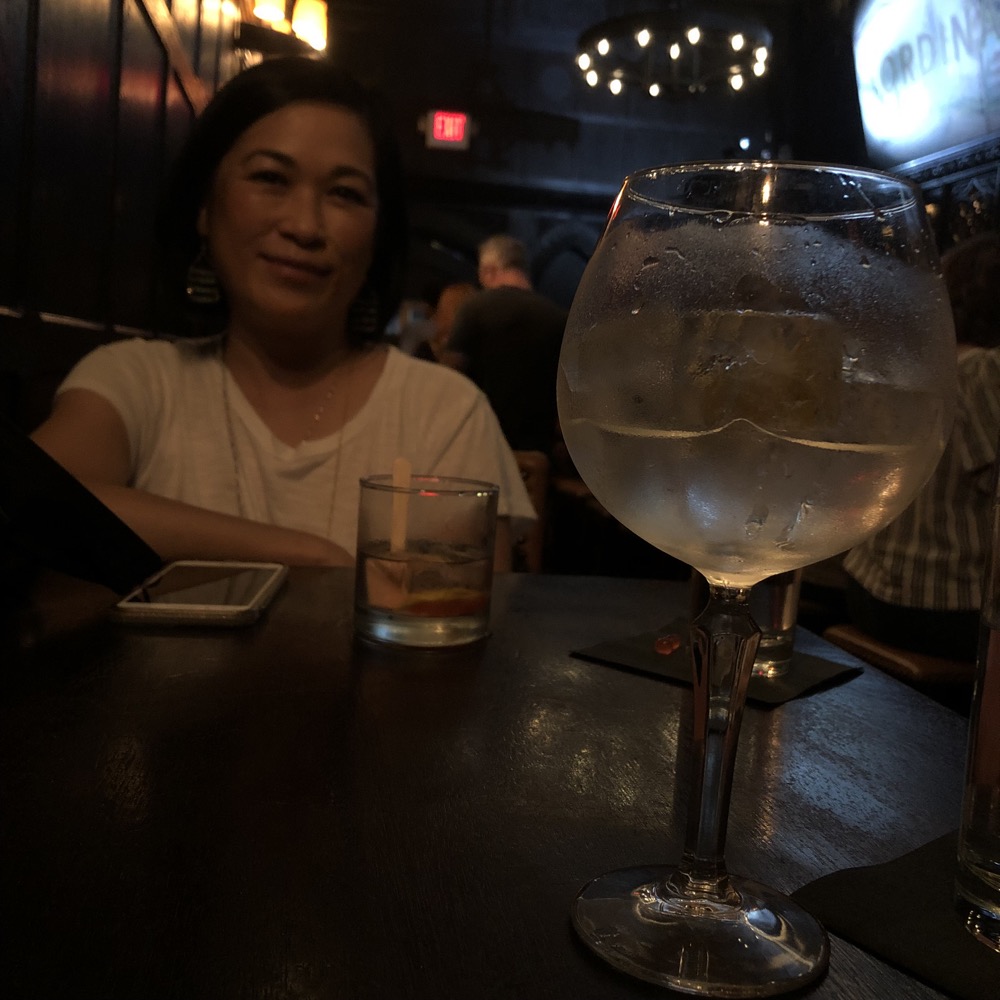 The physical bar and building Ordinary occupies is worth a diversion. The bar itself has been called “the oldest bar in Connecticut,” and depending on whose history you choose to read and believe, the space can be traced all the way back to colonial times. On Ordinary’s website, historian Caplan has written an extensive history of the corner of College and Chapel and all the establishments that have been there.

He claims that by 1659, a guy named John Harriman lived there and ran the town Ordinary, or tavern. Being located where it is, adjacent to Yale’s Campus and within sight of various theaters, it is a perfect location. Skipping a couple centuries, the Hotel Taft was built here in 1911 and was known as the premier hotel between New York and Boston. There was a bar, but it was shuttered during prohibition.

Once that nonsense was repealed, the barroom was renovated with a new bar, moldings, doorways and more. The bar that was built then is the same bar you see at the Ordinary today. 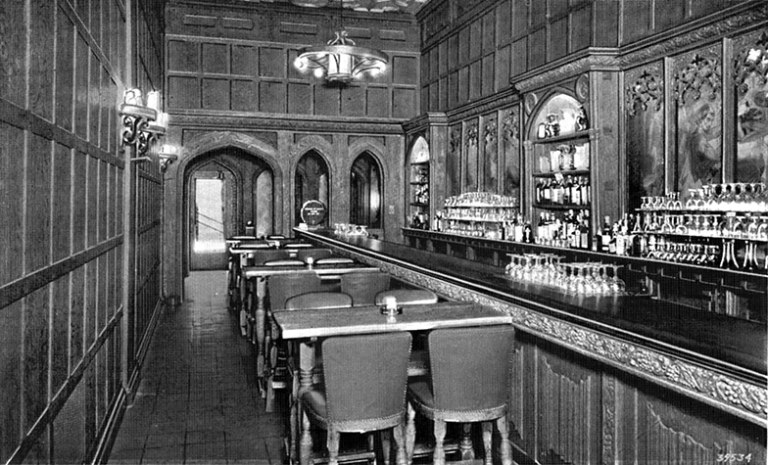 The hotel closed in 1973, and the bar ultimately became the beloved Richter’s in 1982. Richter’s closed in 2011, opening the door for Ordinary to continue serving booze in this same location. (I’ve skipped over all sorts of stuff which again, you can read more in Colin Caplan’s extensive piece here.)

Hoang and I took our seat and… I didn’t hear anything she was saying. They had transformed the entire interior of the bar into a Twin Peaks themed wonderland. It was… awesome. 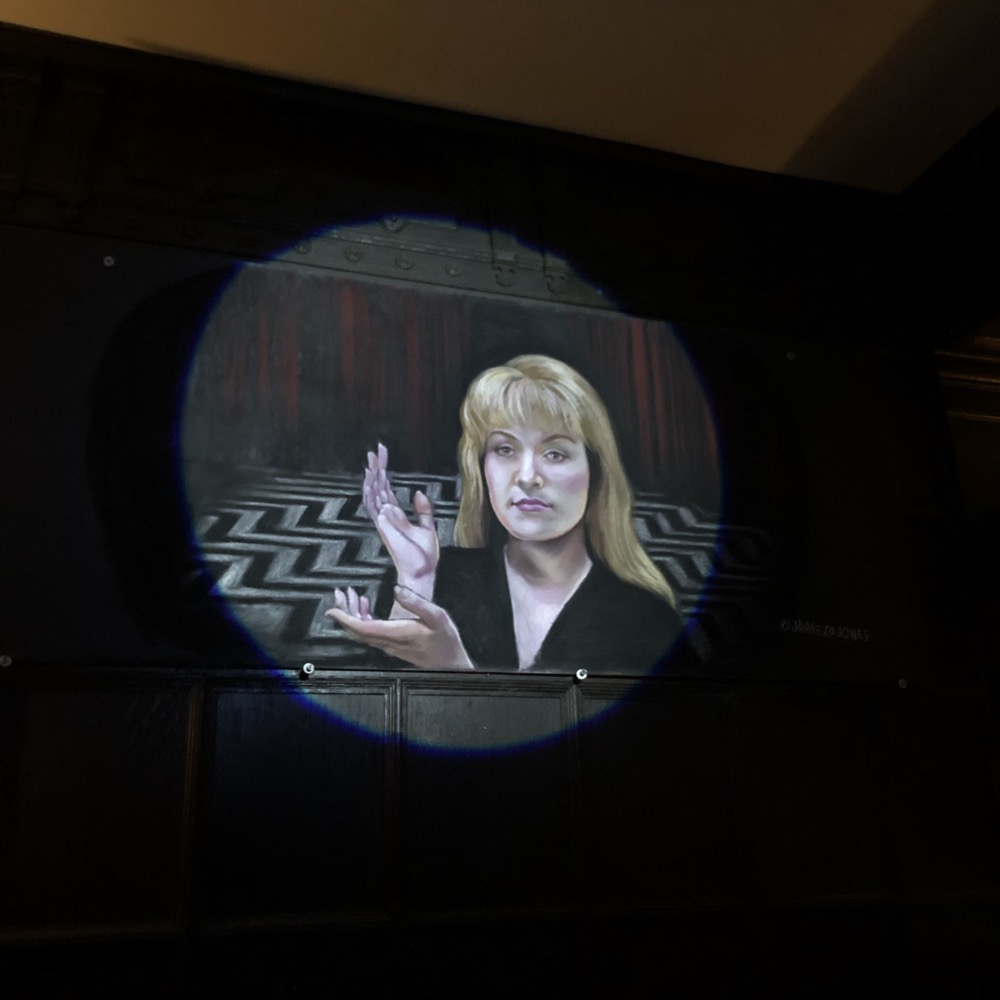 (You should know that I’m an embarrassingly huge Twin Peaks fanboy.)

Before I could absorb the whole vibe, we were given the drink menus and… oh my god, “Diane, this is the greatest themed bar I’ve even been in.” 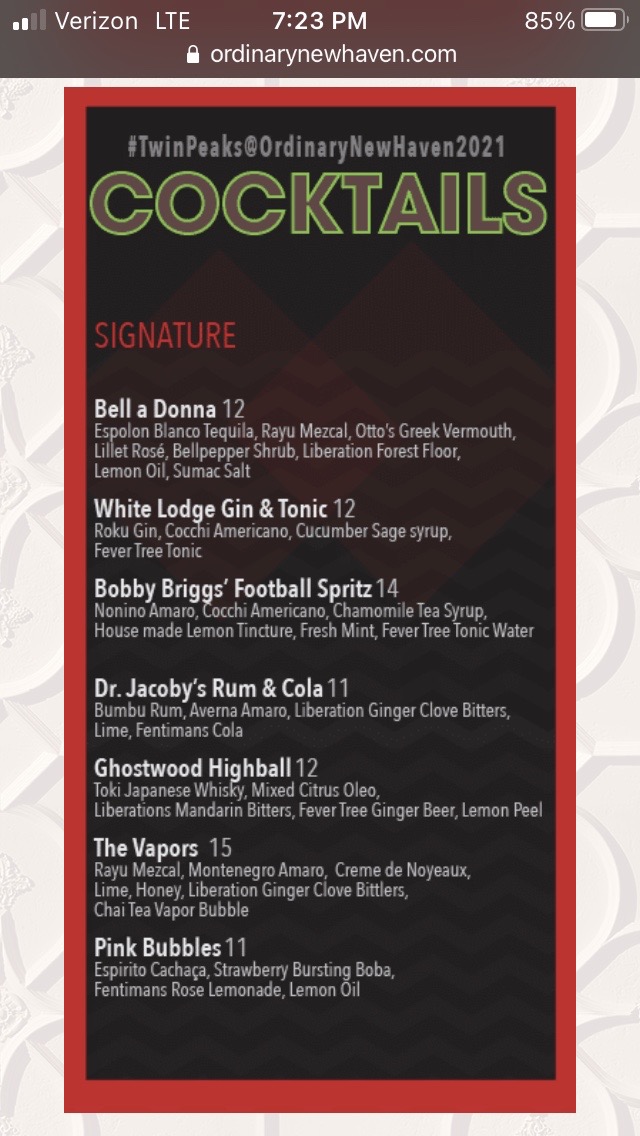 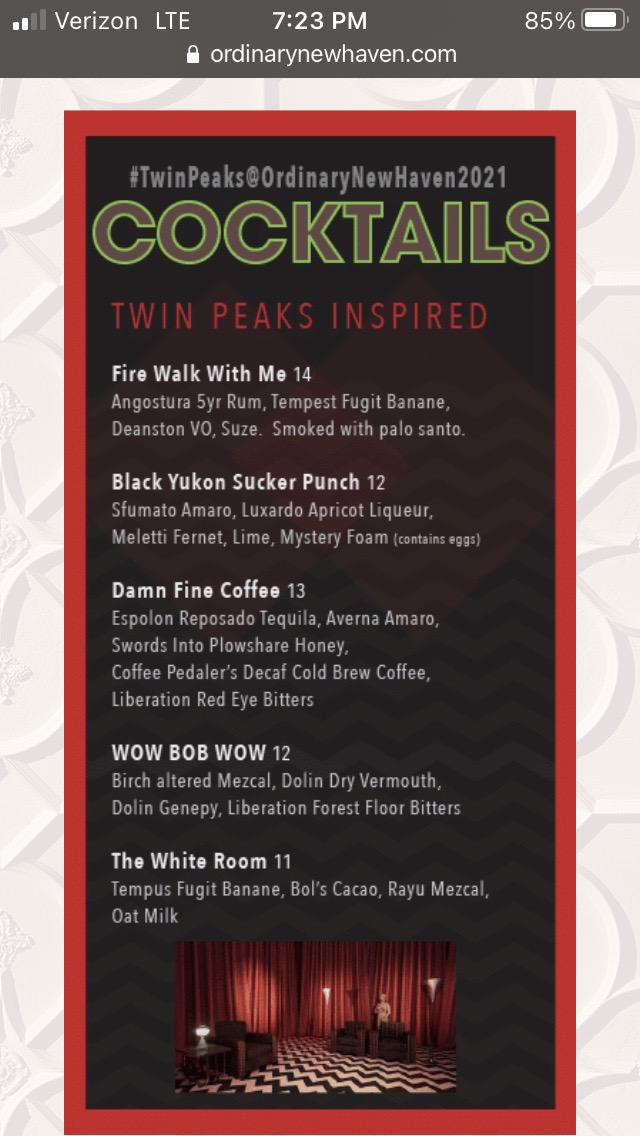 I was so happy. Hoang just wanted a drink.

I went with the White Lodge Gin and Tonic and she, The Pink Bubbles. Both were delicious. I wound up talking with the owner Tim for a while and asked about the whole Twin Peaks thing. Apparently Ordinary changes up their interior them a few times per year, based on what local artists or designers or whatever come up with. 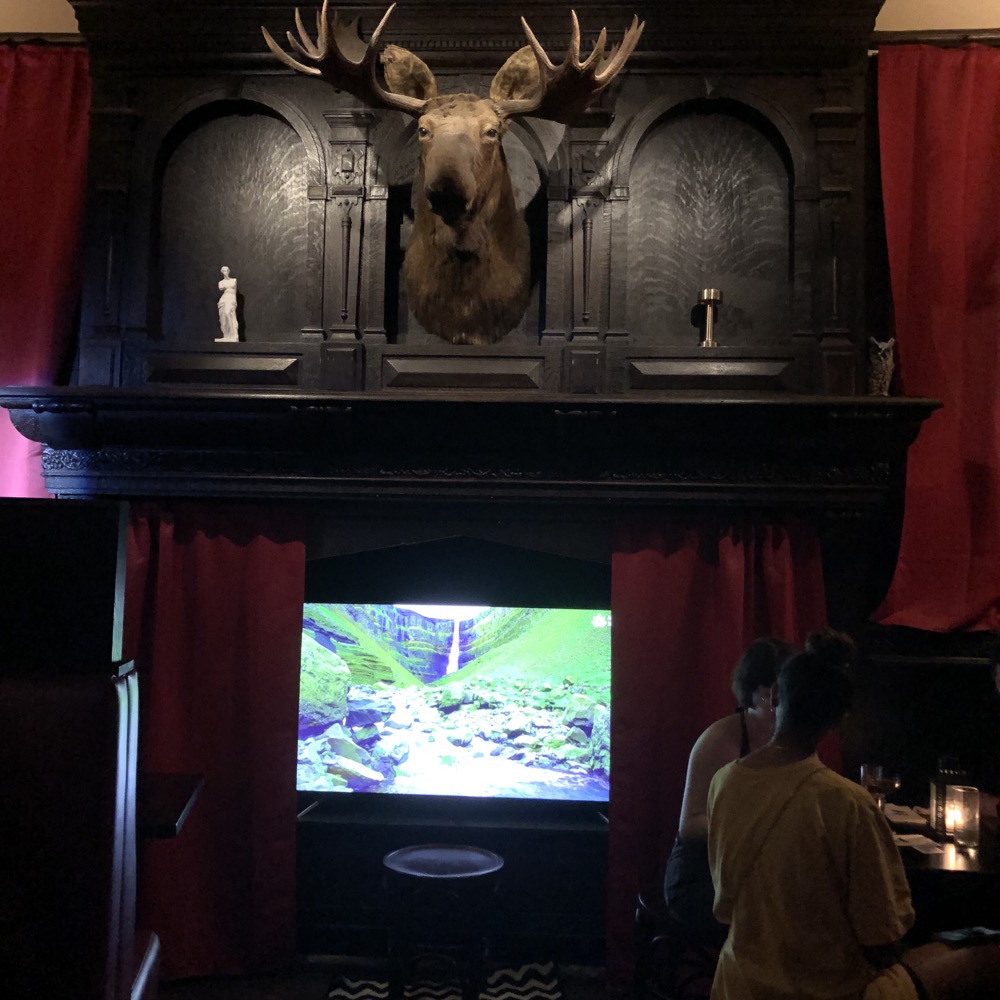 I was just so impressed with how deep they they went here, with the zig-zag carpeting, the Venus de Milo statuette, the owls, the red curtains… I loved it. I want this in my house. Sigh.

We finished our drinks and I did a slow walk around the whole place. I wanted to take more pictures, but also didn’t want to take pictures of random guests. I wanted to go up some stairs to take in everything, but got yelled at by security. I wanted to steal the Dale Cooper painting. 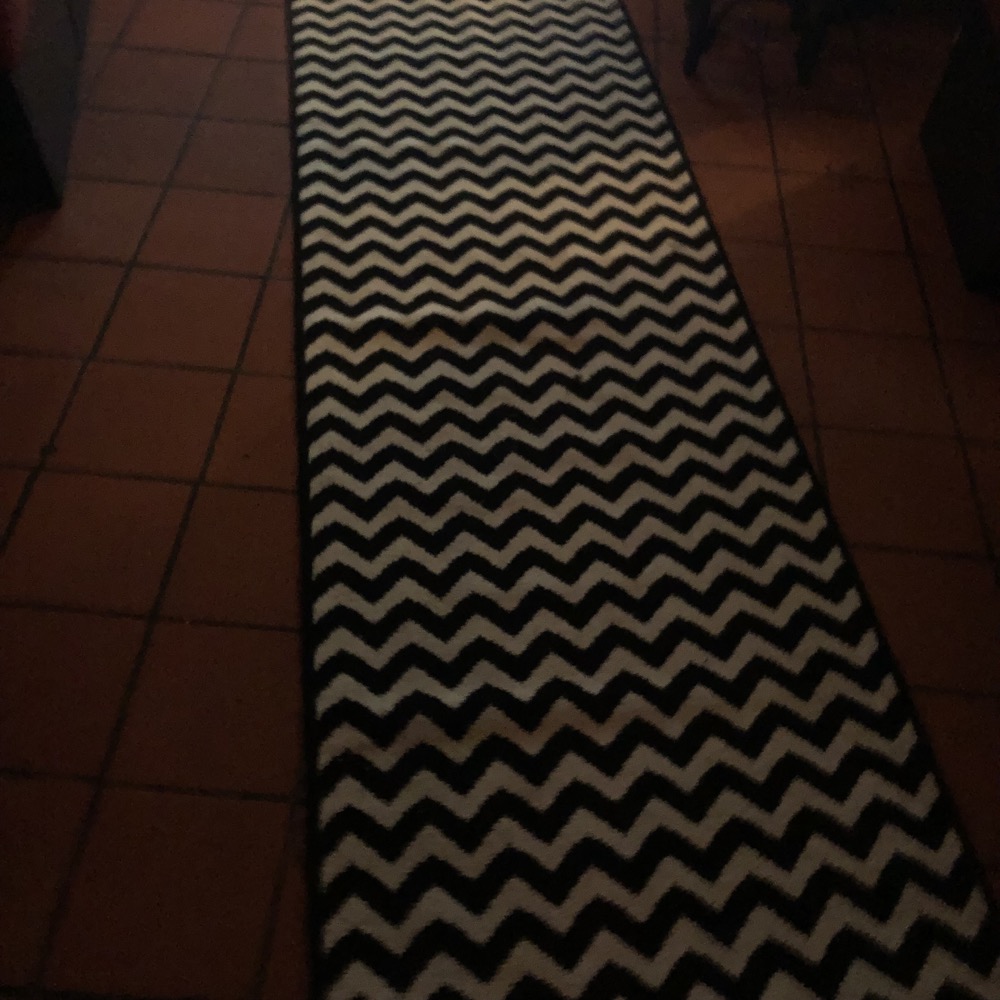 I also wanted to check out the dang New Haven Cocktail Museum already. So we paid our bill and stopped in the lobby again. The way it works here is they have sort of alarm video system that when someone is in the lobby, they are greeted and ushered in immediately through the locked interior door, made to look like a bookcase because of the whole speakeasy thing. But if you just want to, you know, check out the freaking “museum” thing there, you keep getting hassled to come in every 2 minutes.

This tells me that pretty much no one is taking the time to absorb all that is the New Haven Cocktail Museum. An exhibit which, by the way, was also created by local historian Colin Caplan. Who has also written a very detailed history of New Haven Pizza. And collaborated on a documentary film about the same. The dude knows more New Haven history than anyone on earth, and the fact that he’s chosen to focus on pizza and drinking – and has had success with that – is pretty impressive. 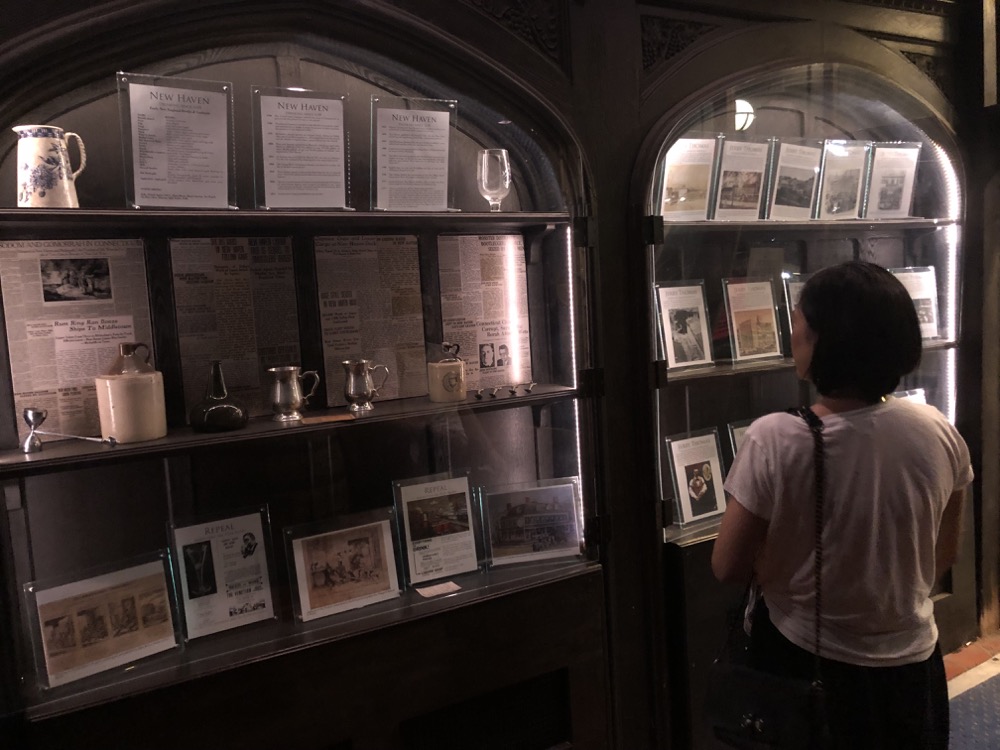 The idea of the museum is to explain the connection between New Haven and “the cocktail culture,” tenuous as that may be. There was a guy named Jerry Thomas who is apparently a “grandfather of cocktails in America.” He was from New Haven. He wrote the first cocktail recipe book in English! In 1862!

There are several panels about this Jerry Thomas guy. He traveled all over “perfecting his craft” and, I don’t know, was from New Haven. Like I said, tenuous. As is everything else here, really. 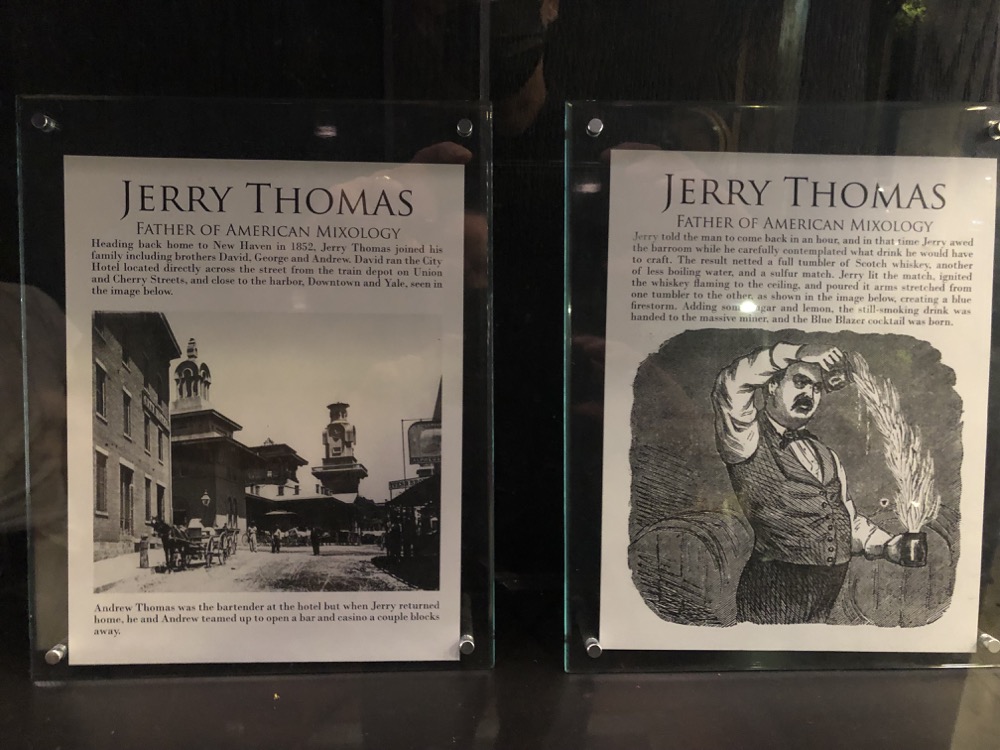 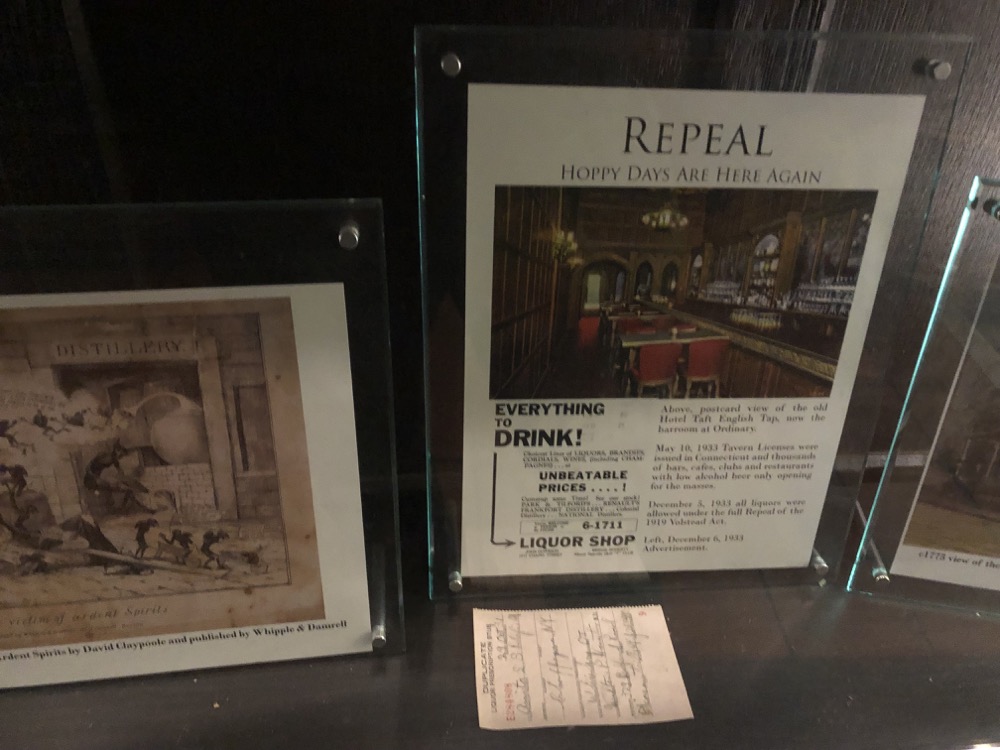 As a port city, rum-runners and bootleggers came through here. Okay. On the shelves and in glass cases, there are old drink menus; the first recipe recorded on how to make a Bloody Mary; a copy of “The Cocktail Guide and Ladies Companion,” written in 1937.

There is a 1826 cartoon titled, “the Drunkard’s Progress,” which demonstrates the downfall of drinking which eventually leads to losing your family and ending up penniless. That’s… often true and not an advertisement for Ordinary and the fishbowl sized gin and tonic I had just drunk. (We were on our way to see Patton Oswalt across the street, if you were curious.) 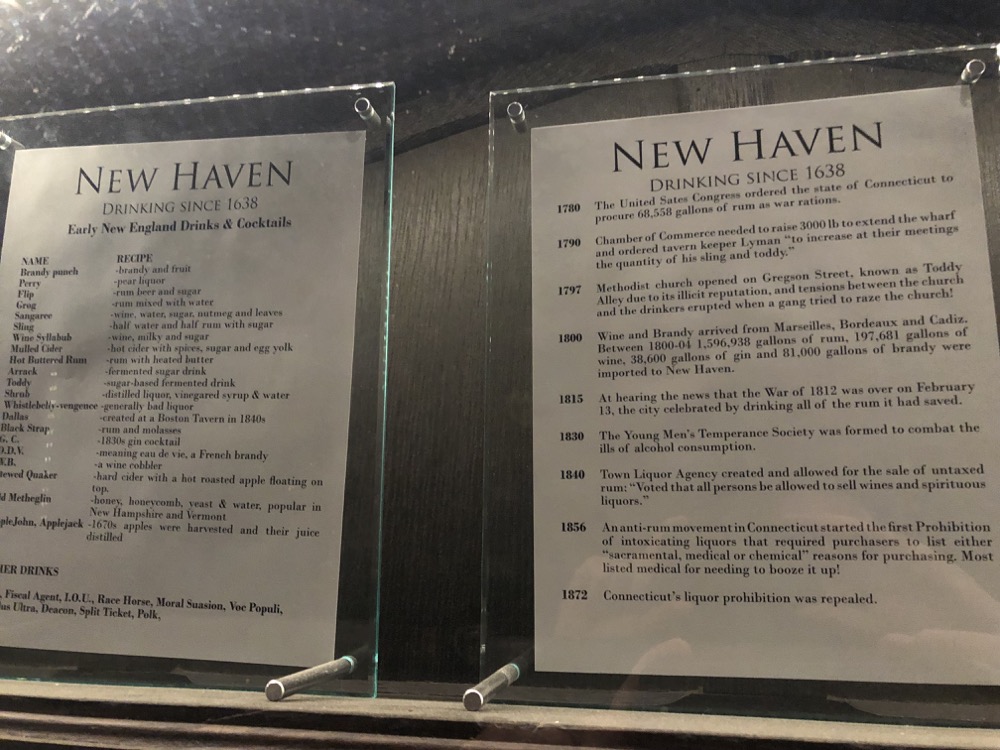 Okay! That’s it! The New Haven Cocktail Museum! It’s a cool little thing to have here, at one of the more iconic and historic drinking locations in the state. An effort was certainly made.

Ordinary is a cool bar. They have a pretty extensive food menu in addition to their drinks. And I guess you can learn a few things in the lobby if they let you. 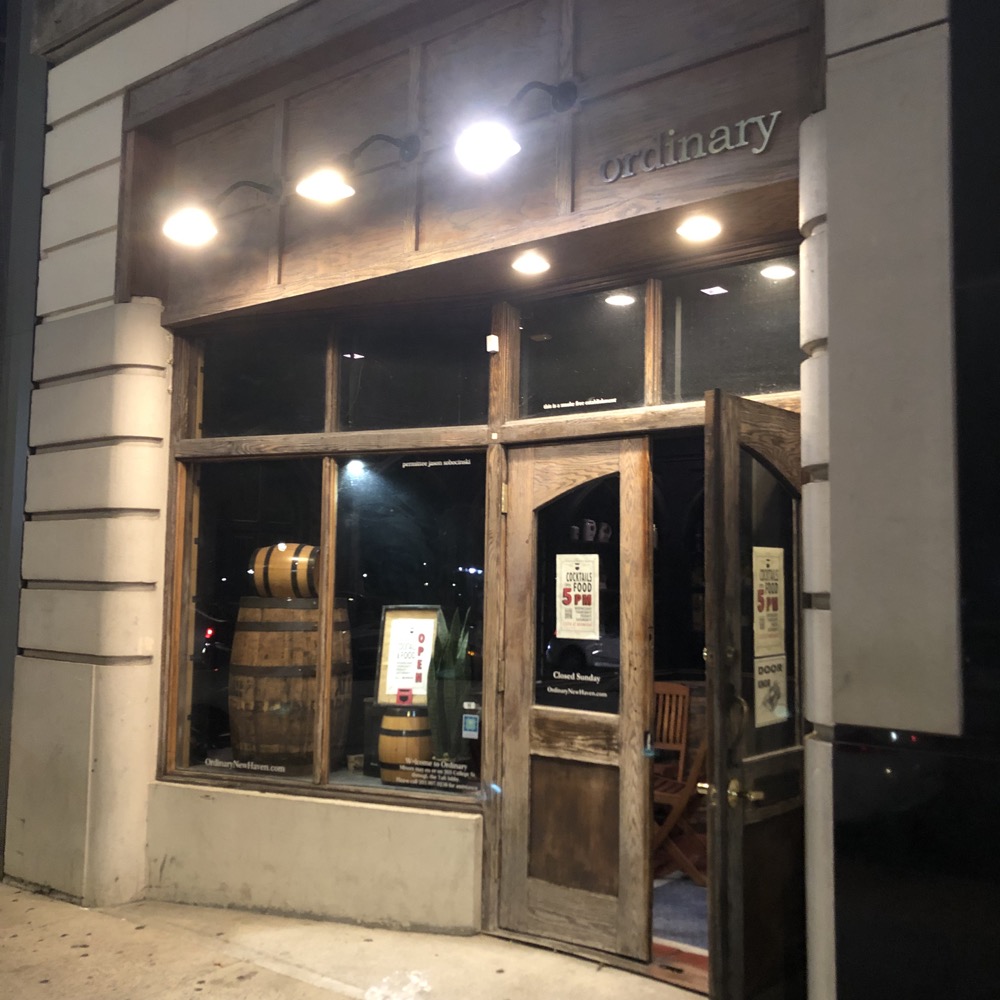