The Internet is a wonderful thing. Without it, my own experiences would just not be as rich and informational as they are here on CTMQ. But I also find great joy in learning about stuff around the state from old school pamphlets I pick up all over the place. When the two are married together, it’s great. My short hike to Nonnewaug Falls with Damian is a perfect example. 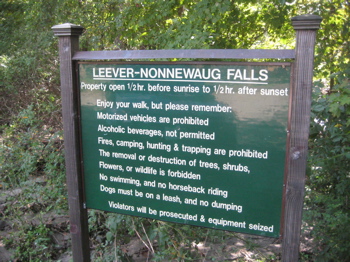 I had never heard of these falls in my life, but came across a “Walking Woodbury” pamphlet somewhere in that town. I flipped through the pages and sort of dismissed most of the walks as they were all of the historical “walk down this street and look at this old house” type. I do enough of that by default. But we love waterfalls, so I made a mental note of it to check it out at some point.

So during a day of driving around that part of the state picking up items from some of the very kind breweries and wineries for a silent auction we put together, I drove down the untraveled back roads at the Bethlehem/Woodbury town line off of route 6 to the small parking lot at the falls’ trailhead. Hoang had to, um, do what nursing mothers have to do when they haven’t nursed for a while with a creepy machine that makes funny noises, so we parked in a private spot and Damian and I hit the trail. 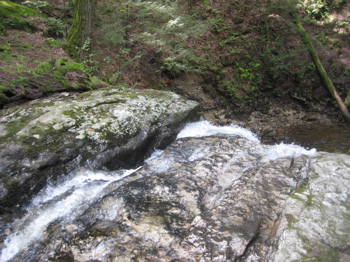 Have you ever tried hiking with Damian? Yeah, it doesn’t work too well. The boy’s disabilities often manifest in laziness he and much prefers his dad to pick him up and carry him. I comply, too often, in the grocery store or whatever, but walking up a hill through the woods with him in my arms… I’m not a fan. But 10 feet up the trail… 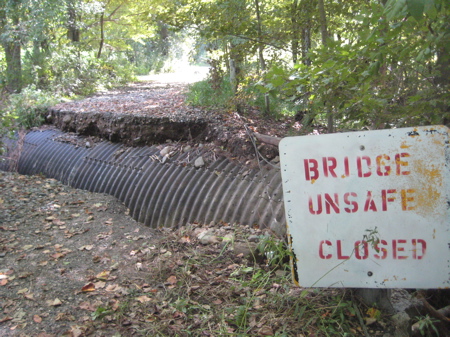 I was left with no choice! Connecticut had just experienced Hurricane Irene and a host of other massive downpours, so this was not surprise. I negotiated the traverse with the boy and basically forced him to walk after that. The trail isn’t long, nor is it too difficult at all. It’s also not really marked all that well, but pretty much anyone can figure it out.

(Okay, I take that back… I know plenty of people whose heads would explode doing this, so never mind.) The trail is marked well enough and even if you go the “wrong way,” you’ll simply end up crossing the top of a mowed field and hook back up with the trail to the falls in short order. 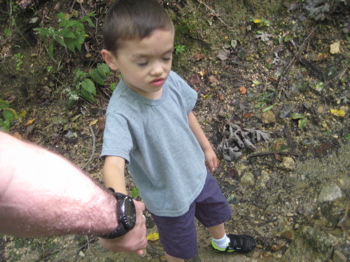 I took the branch up the hill across the field because it was a tad shorter and, again, I had Damian. (I’ve since read that this is a private farmer’s field and you shouldn’t do this. So don’t do it. See the details here.)

That same blog, apparently wholly dedicated to this small open space preserve, contains a TON of information on the area. I’ll be filling out this page with info from the Nonnewaug Falls Blog and elsewhere. This guy loves these falls and even says, that Nonnewaug Falls is “possibly the most beautiful place on Earth.” Points for enthusiasm, no matter how slightly crazy. So let’s get to it – what’s up with the funny name what’s this joint all about? 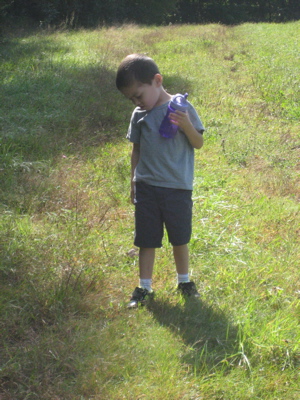 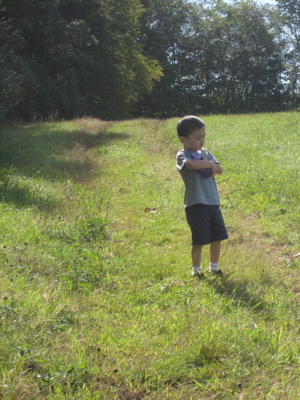 I call this “Scenes of a defiant Damian”

From The Hartford Courant’s Peter Marteka:

…And generations of people – from Native American Indians to visitors arriving on horses and buggies – have visited these picturesque falls. A trail through the hemlocks takes visitors along the northern slope of the upper and lower falls – now protected by the town and Bethlehem Land Trust. At different points visitors can get a closer look at the falls. For those who don’t mind getting their feet wet, a trip along the stream’s mossy banks will reward them with the spray from the falls as it plunges into huge, deep pools.

The falls are named after one of the last chiefs of the Nonnewaug tribe who was buried nearby. A plaque on the southern side of the upper falls keeps the chief’s memory alive. The plaque was placed there in 1916 by members of the Nonnewaug tribe of Seymour. It reads: “To the memory of Nonnewaug last chief of his tribe, friend of his white neighbors, who sleeps with his fathers near these falls which bear his name.”

The falls are fed by a clear, gentle stream – the East Nonnewaug River – that cut channels into the rocky ledges. Moss covers the rock outcroppings, the gnarled and twisted roots of the hemlocks and the boulders in the stream. It’s always fun to walk upstream and view this tranquil, gently flowing waterway that turns into a huge cascade below.

“Viewed as a whole,” wrote William Cothren in his “History of Ancient Woodbury,” published in 1854, “it is as wild and romantic a place as can anywhere be found in our country.”

Man, what is it with these locals? The falls are pretty, sure, but this hyperbole is just too much for me. 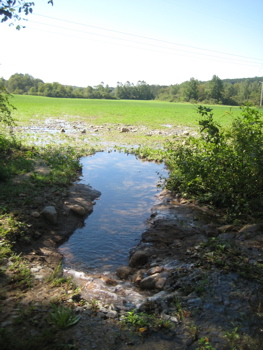 The hemlock grove surrounding the falls area is very tranquil and pretty. The falls themselves are an 18-foot drop followed by a smaller 7 foot plunge. You are not allowed to swim and you can (technically) only view the falls from the trail’s approach side, as the other side is private property. The drop into the gorge is very steep and very dangerous with a special needs 5-year-old at your side, so we didn’t get to explore the area too much – nor get a good photo. 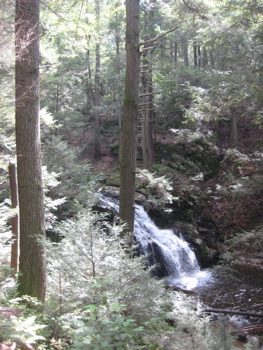 Funny thing is, there are pictures from the “other” private property side all over the aforementioned blog. Oh well, one must make such decisions for good photos. I sure as heck do similar things for CTMQ.

Anyway, let’s learn a little bit more about the place, from “The Town and People: a chronological compilation of contributed writings from present and past residents of the town of Woodbury, Connecticut” by Julia Minor Strong:

June 24, 1900.—Historical Nonnewaug is deserving a short notice from one investigating the principal features of interest in Woodbury. The name is derived from an Indian tribe inhabiting the northern part of the town a few centuries ago. The place is one of wild and picturesque beauty, the winding river, the roaring waterfall and the unmarked grave of the chieftian, each bearing the name Nonnewaug. These self same Falls have been visited by many a tourist in recent years and pronounced as charming a view as can be found in any of our New England States. As one stands at the higher Fall the thought comes of the sad tragedy enacted here, characteristic of the Indian disposition. Nonnewaug, seeing the approach of civilization, the white men appropriating his lands as their own jumped over the Falls, thus ending his life. Many mementoes have been found from time to time of this past race. 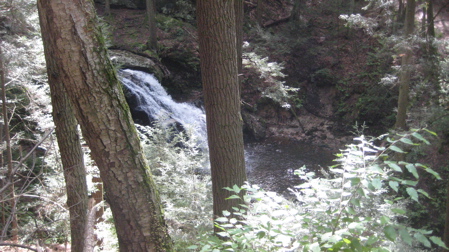 The brook gurgles and splashes on, singing to the spirit of the Red Men as its rhythm was their associate in life seeming, to say as in the words of the poet, “For men may come and men may go, but I go on forever.” 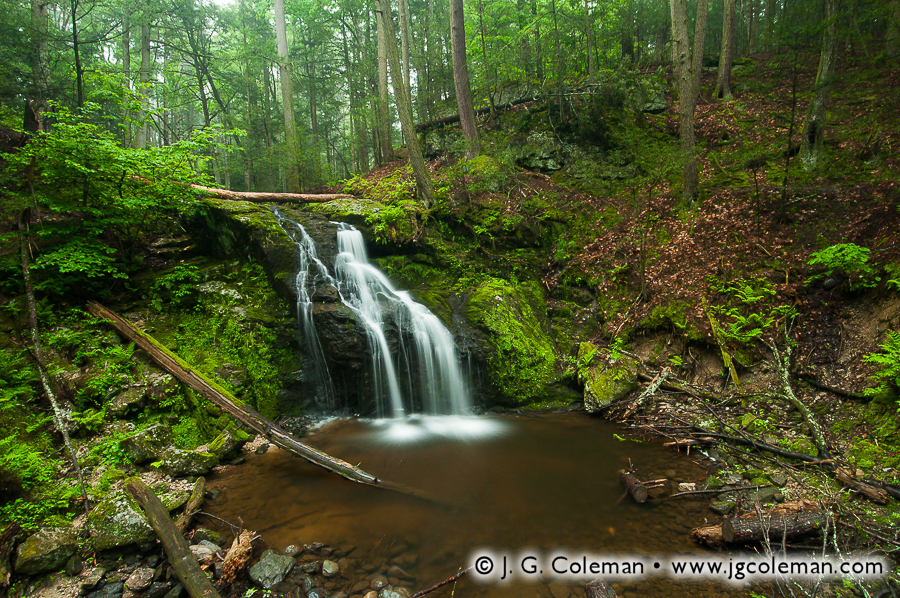 Ahh yes, this is what professional photography Justin Coleman can do at a place like this

Okay, that’s enough of all that. For his part, Damian did pretty well on the return walk to the car. The funny part was at the end with that washed out bridge again, I scuttled us across and came upon a young fit woman who incredulously asked me, “Did you… did you just cross that?!” as though I performed some magic. Sheesh, lady, it wasn’t that hard, even with a squirrely kid in my arms. 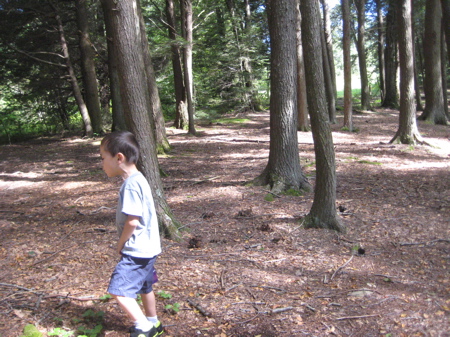 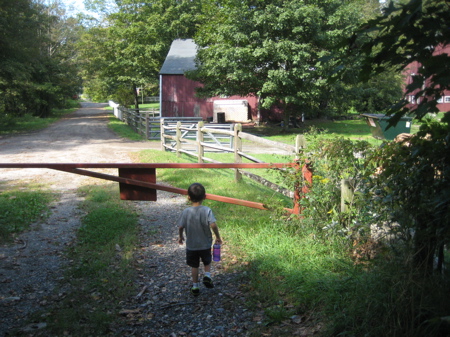