Not in Manchester, Not in Roxbury
Manchester Field and Woods, Union
December 2021

None of the New Roxbury Land Trust properties are officially trailed.

Look, I hear you. When did I start writing about untrailed and admittedly unexciting properties? The answer is… today. And I don’t really have a good reason as to why other than the New Roxbury Land Trust exists and protects land in Union and Woodstock and have a nice little website and… and I figured I’d throw them a bone for their efforts. 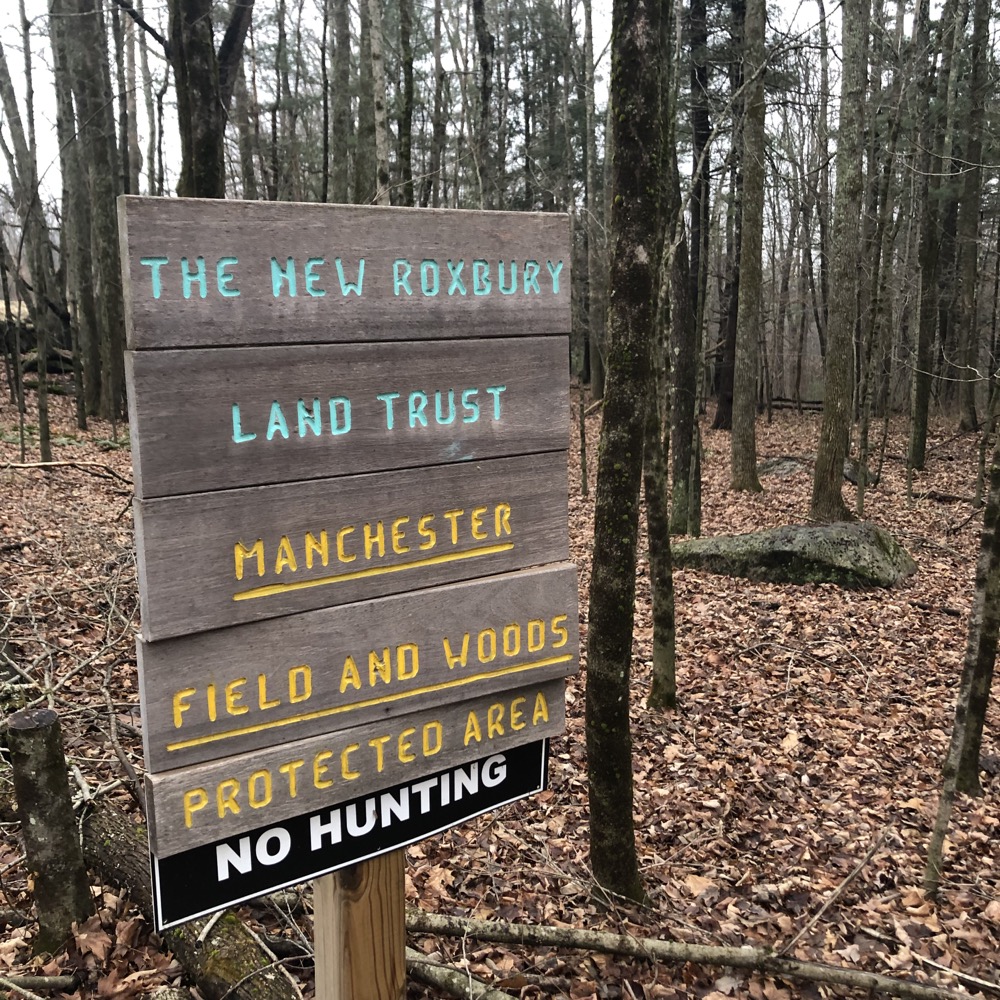 They even have signs at their (non) trailheads.

And since both Union and Woodstock are so heavily developed, it’s great that someone is trying to save these small parcels of woods up there and –

What’s that? Union and Woodstock are like 99% forested and less than 700 people live in Union and many people have no clue where Woodstock even is? Which brings me back to your original question: Why am I bothering with Manchester Field and Woods? 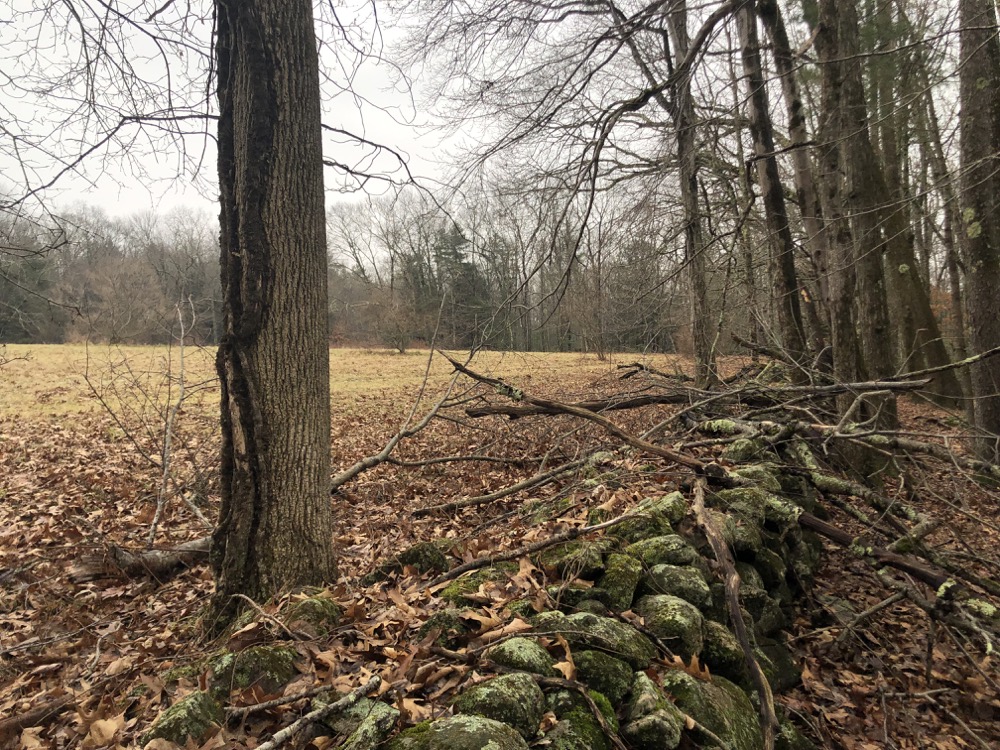 I guess my best answer is that this is in Union and there’s not much CTMQ content for Union. So in a town like Union, I might as well do this type of borderline “worth it” stuff. Just to reiterate: There are no trails here. And getting here is a haul for most people.

The Manchester property is located within a highly intact forest block in northeastern Connecticut, part of the federally designated National Heritage Corridor known as The Last Green Valley (TLGV). The Manchester property consists of two tracts. The first is 53 acres located south of Bush Road within the Natchaug River Watershed. This tract abuts 25 acres of land permanently protected by a conservation easement in favor of The Nature Conservancy of Connecticut (TNC). The second (northerly) tract of 31 acres is part of an unfragmented forest block of more than 5,000 acres within the Quinebaug River drainage basin. This parcel is contiguous to State of Connecticut Nipmuck Forest land. 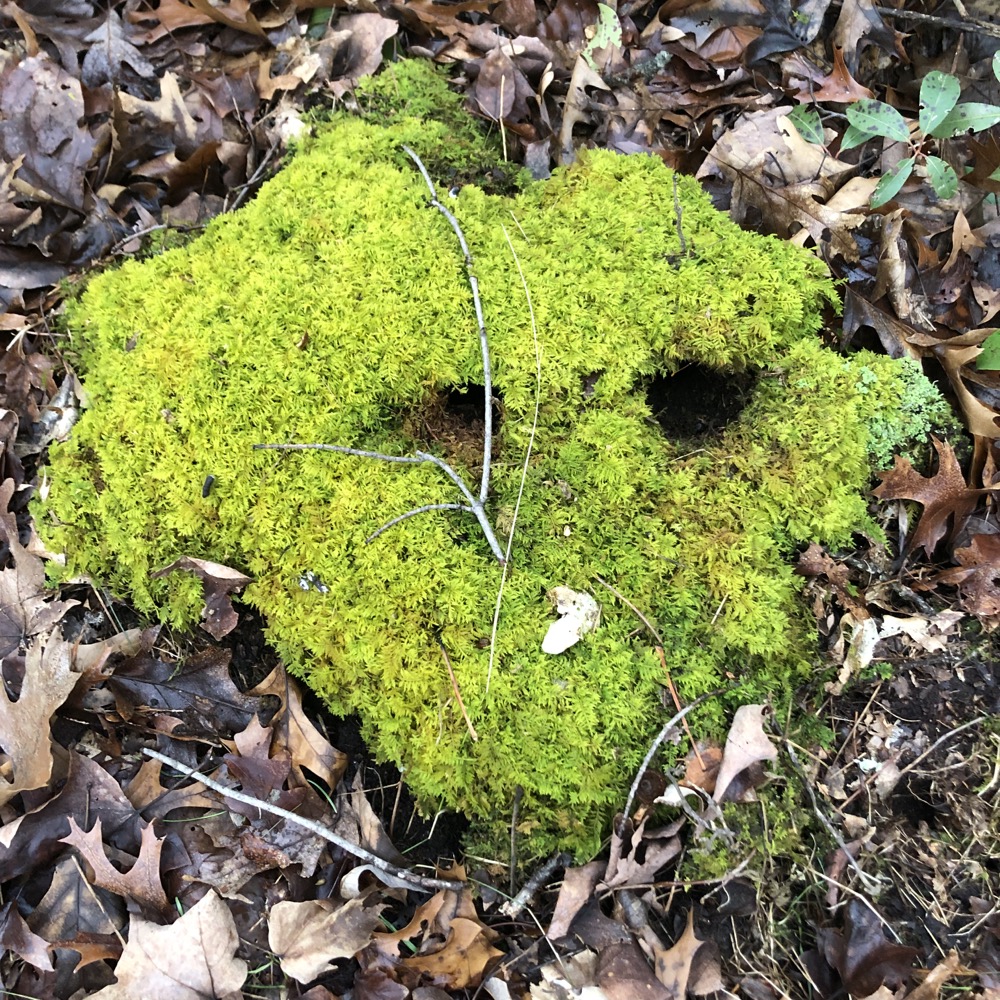 That’s mildly interesting. Also mildly interesting? As I made my way into the south parcel along a stone wall, I noticed something curious about it. Keep in mind that I’ve hiked along, past, over, and through a billion stone walls in Connecticut. I can’t recall any that were built with a lovely and perfect curve like the one here. 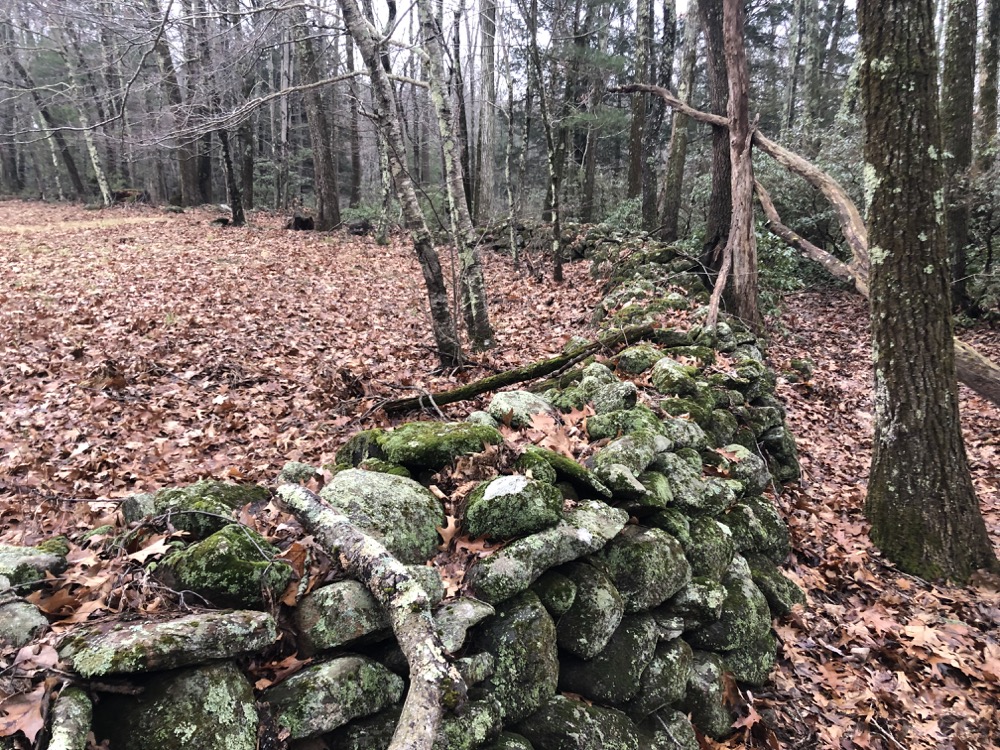 Okay, yeah, you can’t really see the curve that well but trust me, it was really smooth. But what else is this area good for, NRLT?

The property creates a linking corridor between the approximately 9,000-acre Nipmuck State Forest and privately protected lands in Union and Woodstock. The largely intact nature of the forest makes it important nesting habitat for certain migratory songbirds such as warblers that require large forested areas. Many large mammals, such as black bear, moose, coyote, white-tail deer, turkey, bobcat, fisher and beaver use this habitat for feeding and breeding. 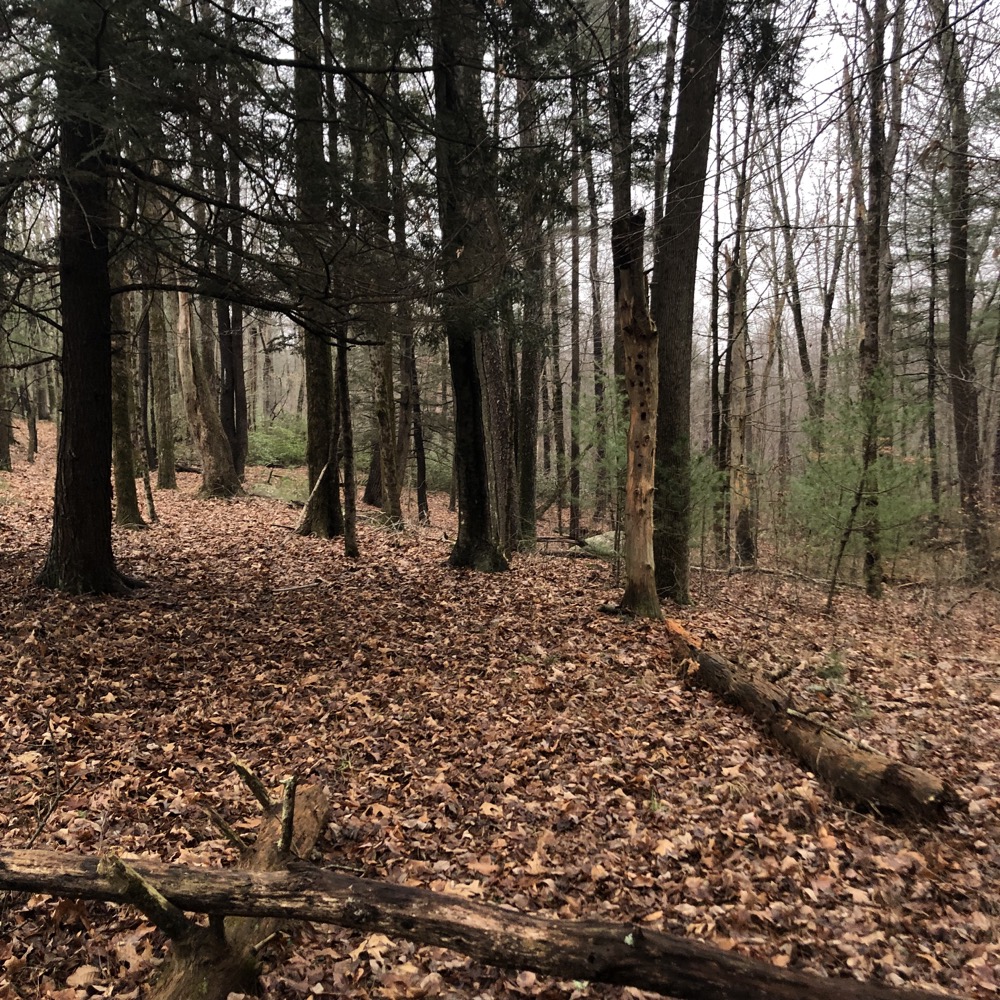 That’s right. Moose and bobcats and fishers. If they’re going to hang out anywhere in numbers in Connecticut, this is one of the better places for them to do so. (Union is the only place I’ve seen a fisher cat. Which is neither a fisher nor a cat.)

Once past the stone wall, a couple herd paths head off in different directions. I followed one down the hill through some laurel stands and that just petered out after 100 yards or so. So I merely circled around, peered as deeply into the woods as possible, saw nothing interesting, and returned to my car. 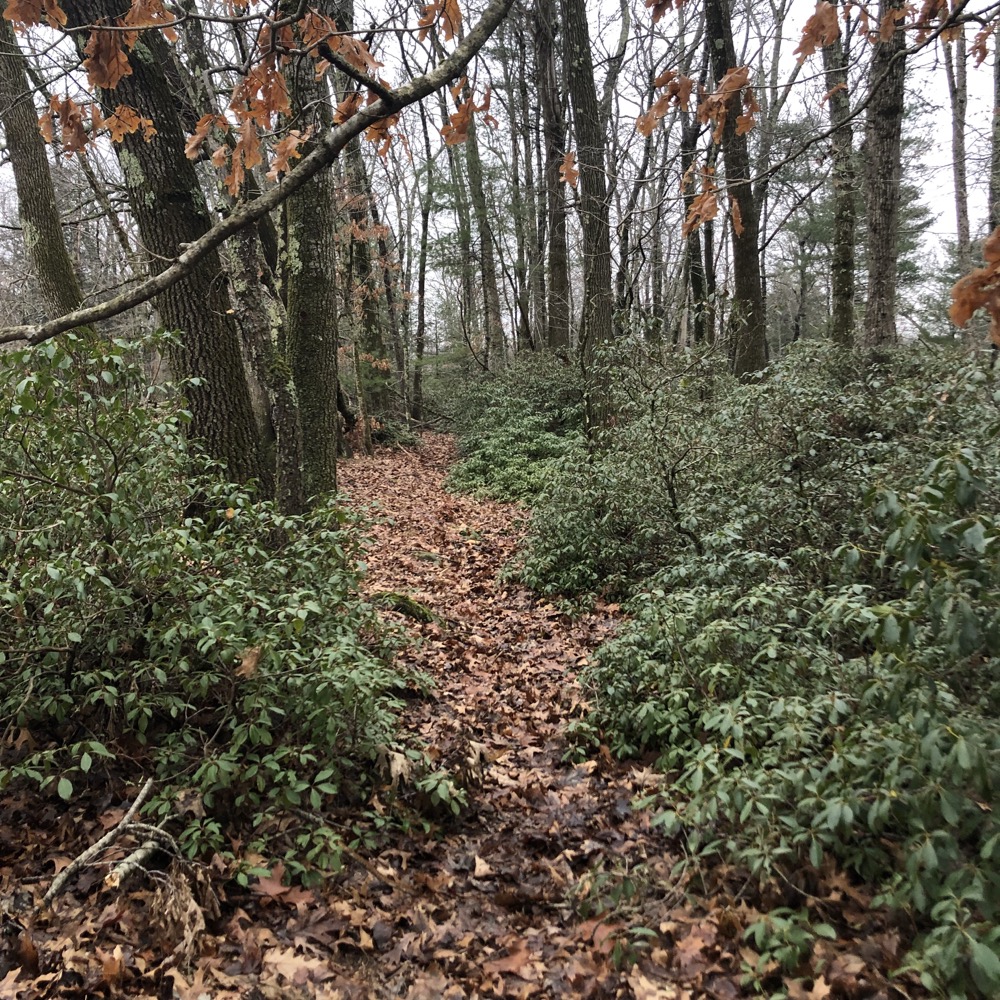 The Manchester Woods parcel isn’t just for coyotes and warblers. Actual scientific study is going on here and it’s pretty cool. In a meadow they’ve planted Bur and Shumard oak trees which are native to the Midwest. They will study their growth rates and acorn production here versus known growth rates and acorn production elsewhere, and then they’ll compare that to what our native oaks are doing these warming climate days.

This property on Bush Road feels remote because it actually is remote – at least by Connecticut standards.

And you thought I couldn’t write 700 words on a little patch of untrailed woods in the middle of nowhere. Never doubt my ability to waste our collective time. 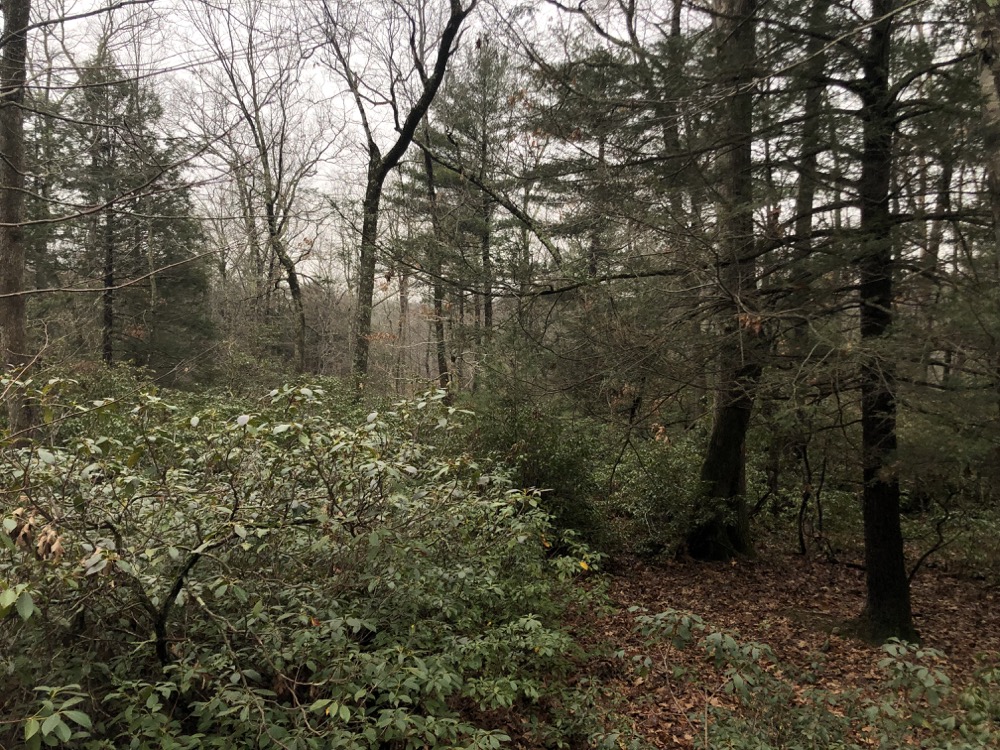