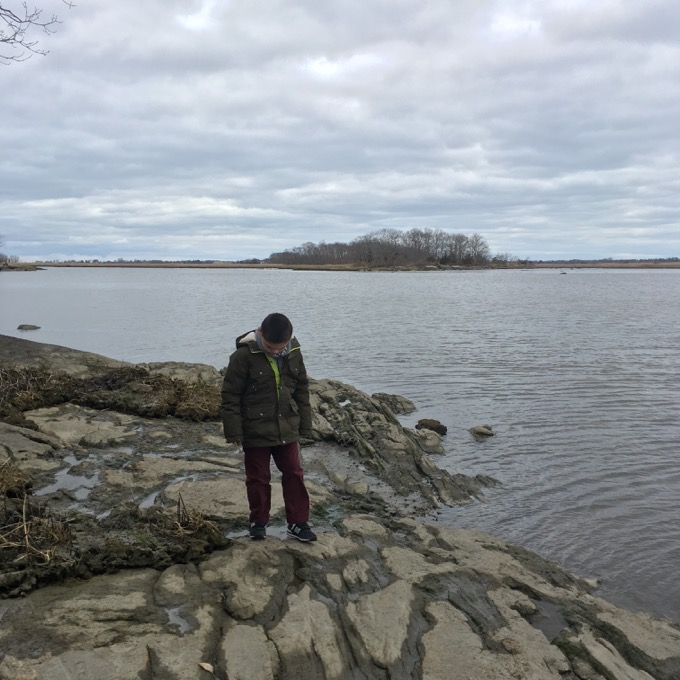 The Old Lyme Land Trust has several properties, none containing a mountain or a particularly lenghy trail of any sort. But it does have several coastal and riverside land holdings, which provide us a departure from the central Connecticut forestlands we’re more accustomed to.

And that’s good for me and good for the boys. It keeps them engaged and excited. 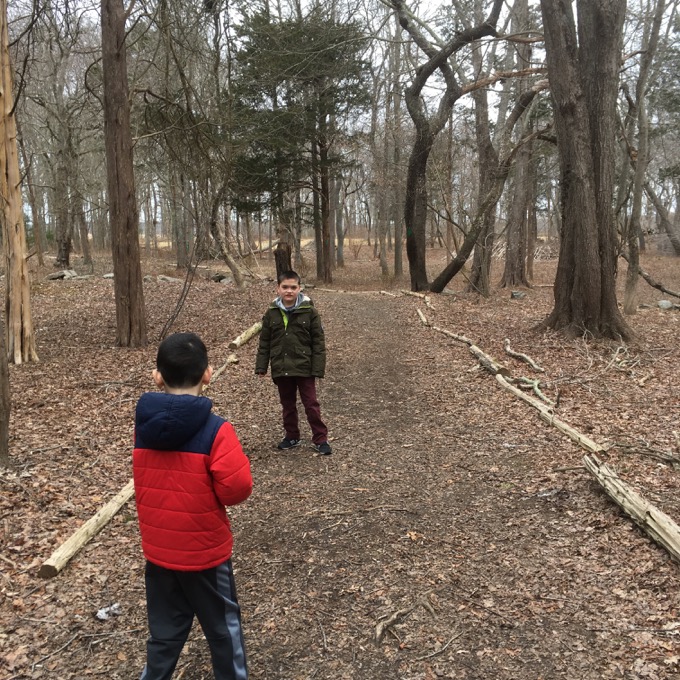 Watch Rock is, quite simply, a really cool place. Tucked on a swath of land along the Duck River just off of Old Lyme’s route 156, the preserve affords visitors walks through deciduous forest, coniferous forest, jagged rocky patches, and of course the rocky shoreline along tidal flats with views out to Great Island, the Connecticut River, and Long Island Sound beyond.

Bonus for kids: Amtrak trains rumble across the river frequently. 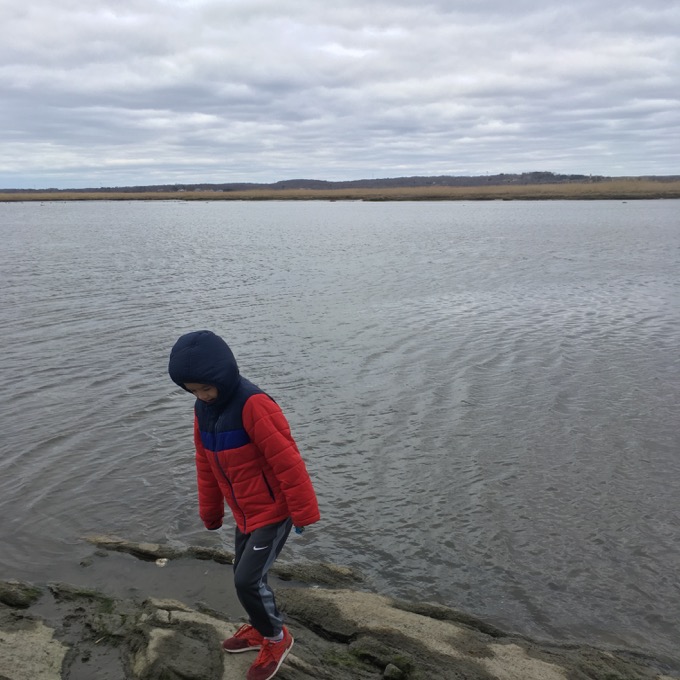 The trails from the parking lot are blazed and very well maintained. The yellow trail follows the northern perimeter of the preserve and guessing very few visitors take it. The green trail cuts through the middle, heading towards the water. And that’s the way we went. 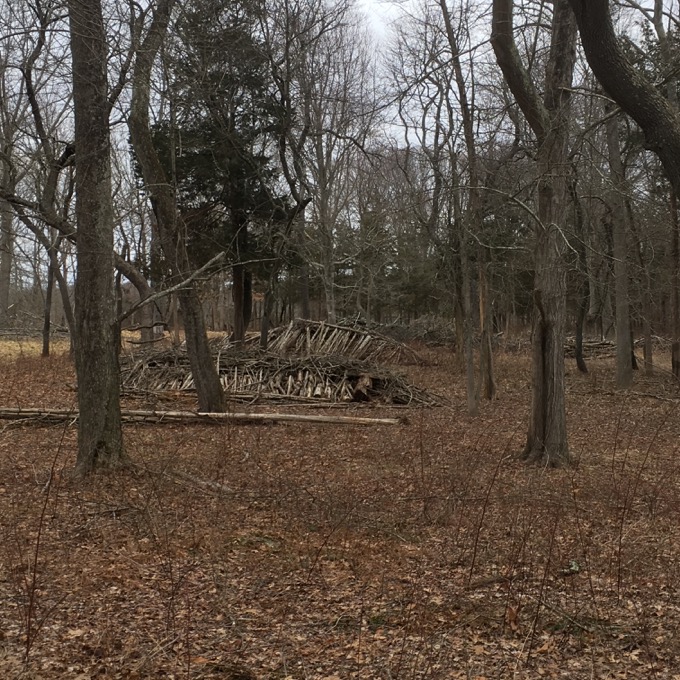 This area was heavily damaged during Superstorm Sandy and I think that’s where all the piles of branches, trunks, and sticks that are almost too-neatly piled in the grassy fields here are from. There are LOT of them; almost like perfect beaver lodges in the woods. Dozens of them. 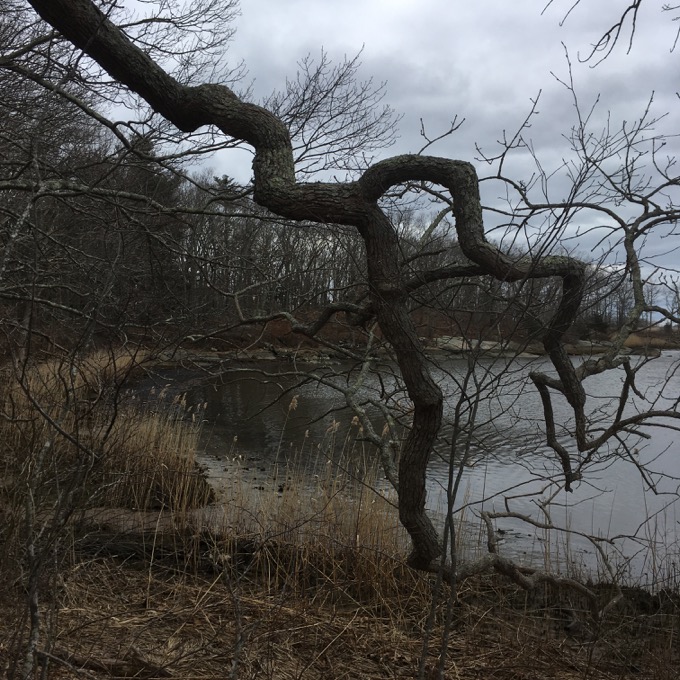 There used to be a so-called “Whimsey Walk” here created by some girl scouts several years ago. It was fairly well destroyed in Sandy unfortunately. The pieces that could be salvaged were salvaged and moved to the Belton Copp Preserve a short ways away. 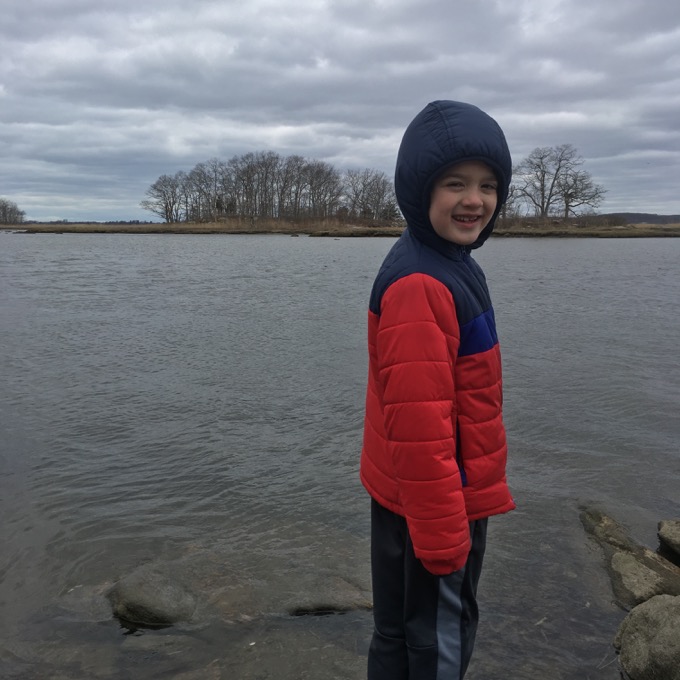 That tiny preserve is cute and fun and I can report that in early 2018, the “whimsey” is in full effect. Our visit to Belton Copp.

We reached the junction with the yellow trail and headed north, to take in the first viewpoint along the Duck River.

Let’s take a moment to learn a bit more about this place. 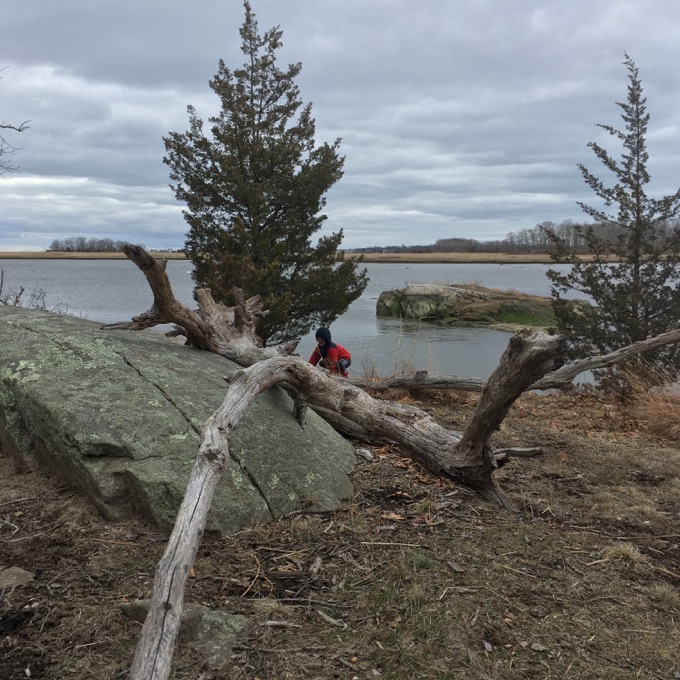 In 2005 the preserve was renamed the Elizabeth B. Karter Watch Rock Preserve after Elizabeth “Bunt” Karter, a civic leader and philanthropist who lived in Old Lyme from 1969 until she died in 2004. An active conservationist and supporter of the Trust, Mrs. Karter was one of the organizers of the first recycling program in Old Lyme. 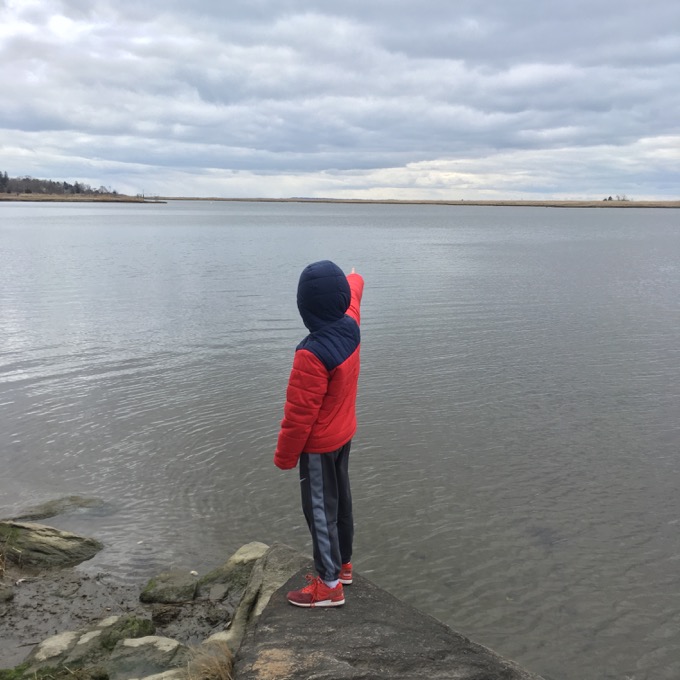 Watch Rock has been inhabited for 4500 years. The Bliss site, in nearby Old Lyme Estates, was dug extensively in 1981 by local archaeologist John Pfeiffer. The artifacts found there dated from 2700 B.C. to 2400 B.C. Adjacent to the Bliss site, the Griffin site had been excavated in 1975. Artifacts recovered from this site dated from 1500 to 1200 B.C. In 1981 Pfeiffer dug test spots on Watch Rock which indicated that, whereas the Bliss and Griffin sites were ceremonial, Watch Rock was residential for this early period. There are signs of continuous habitation from 2500 B.C. to Contact (between Europeans and Native Americans). 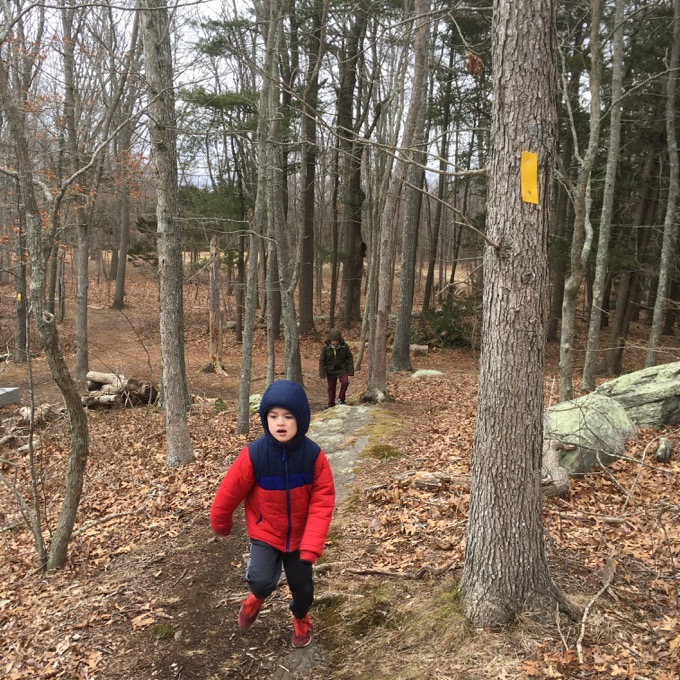 Watch Rock was an important spot in the Contact period. From this vantage point, the local Indians could look north, south and also west toward Saybrook. Hostile Indians could not approach unseen. The Indians weren’t the only ones watching. Oral tradition has it that the Colonials up on Meetinghouse Hill (Johnnycake Hill) could watch the Indians! 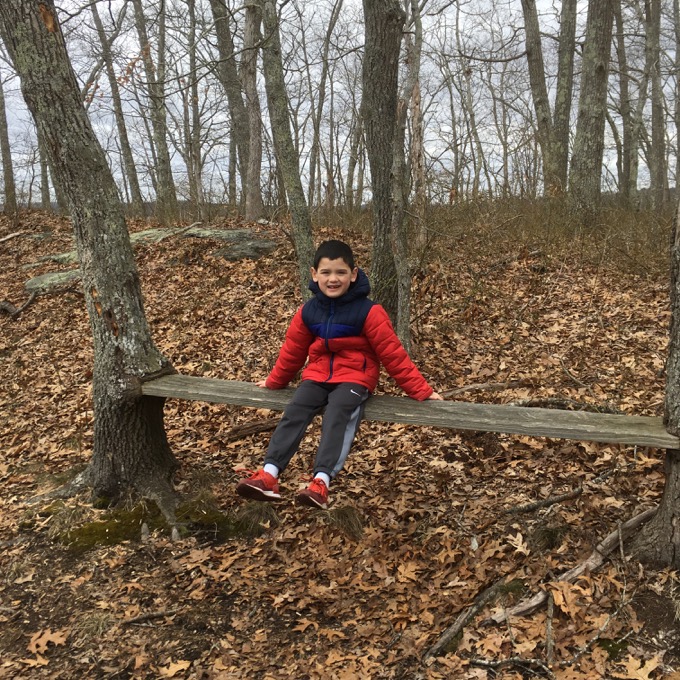 The site was used by the Indians in the summer when they fished the surrounding waters and feasted on the native shell-fish. After the Indians were dispossessed, the land was farmed by the white settlers. In more recent times, it was owned by Evelyn MacCurdy Salisbury, one of Old Lyme’s noted benefactors. In 1970 the property was bought from Katherine Brodeur by the Loctite Corporation. Loctite considered Watch Rock as a possible site for its corporate headquarters. As the property is situated next to the railroad tracks, it had been zoned for light industry. Hence the urgency which the Trust felt to purchase Watch Rock and protect it as a nature preserve.

“Dispossessed.” I like that term. It’s honest and forthright. And you know the ding-dong white people didn’t even eat the delicious clams… 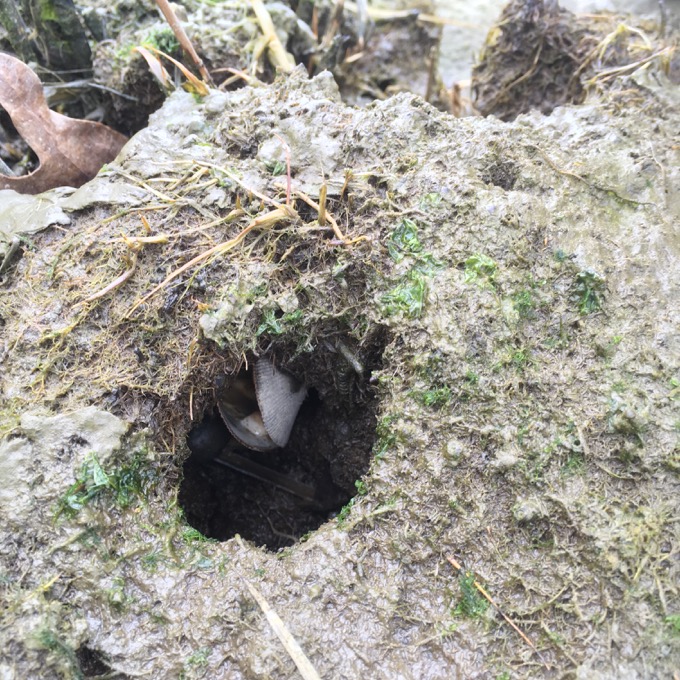 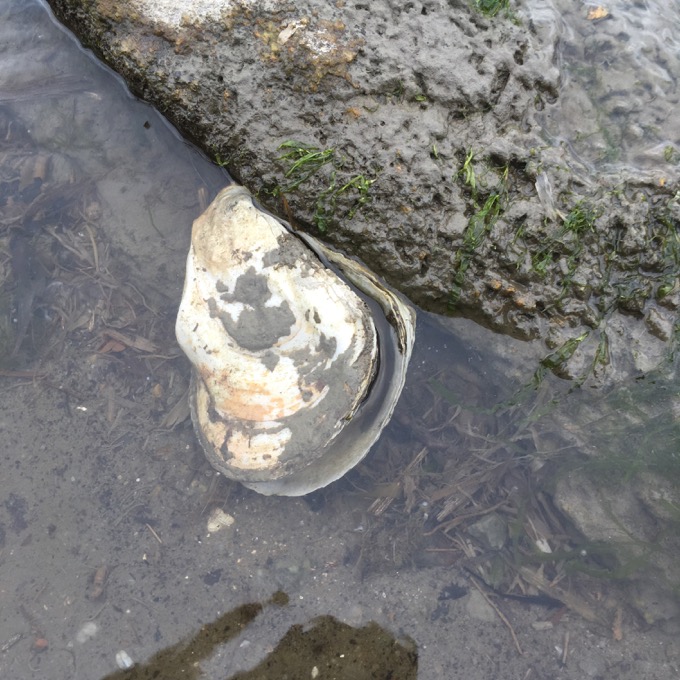 … that were (and as you can see, still are) on offer here. We followed the trail along the river’s edge – which looks far more like the edge of a tidal marsh or even the Long Island Sound – and Calvin particularly loved it. 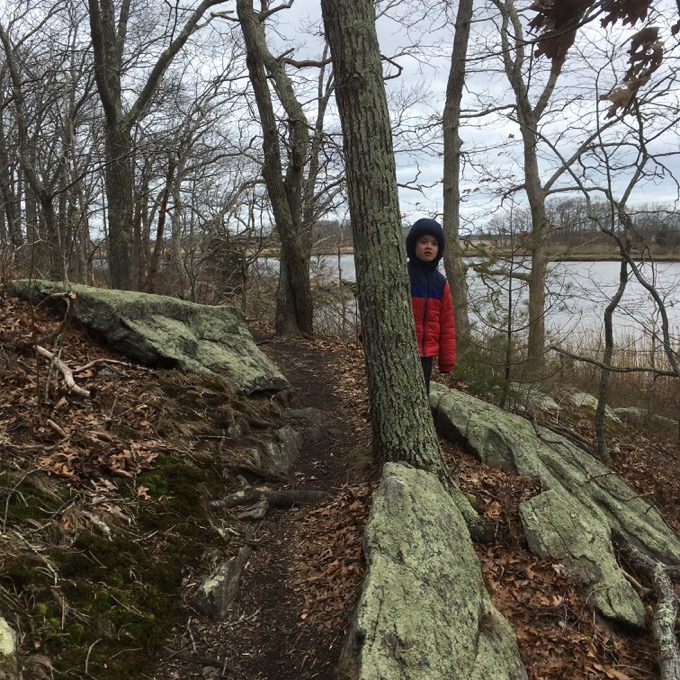 Even despite the fact that it was cold. The wind was whipping off the water and The 40-degree day now felt like a 20-degree day. But since I’m raising my boys right, and we don’t accept the wind chill as an accurate measurement of the actual temperature, we continued to jump around on the rocks and have fun. 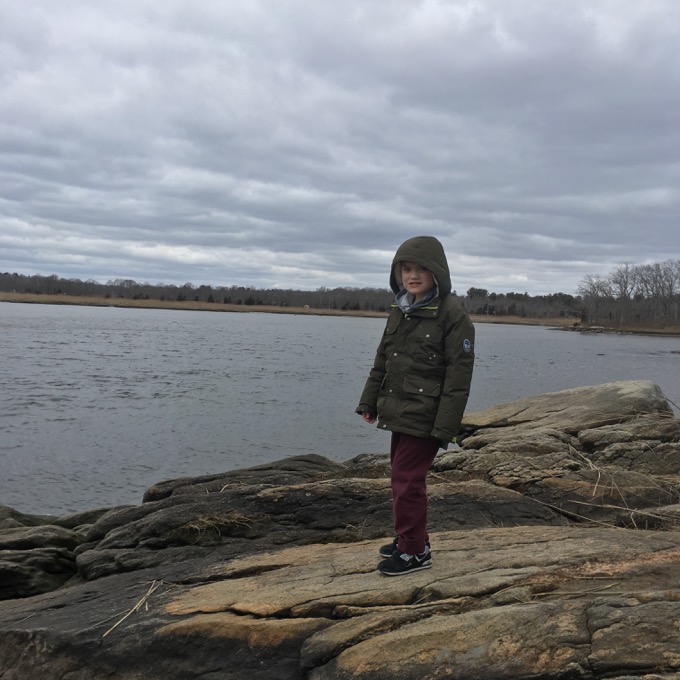 We took the trail back into the woods for a bit and passed an oddly massive block of granite that I assume is intended as a bench. I didn’t read the little plaque on it as I was busy moving Damian along, but I am still curious as to how this thing was carried out to where it sits. 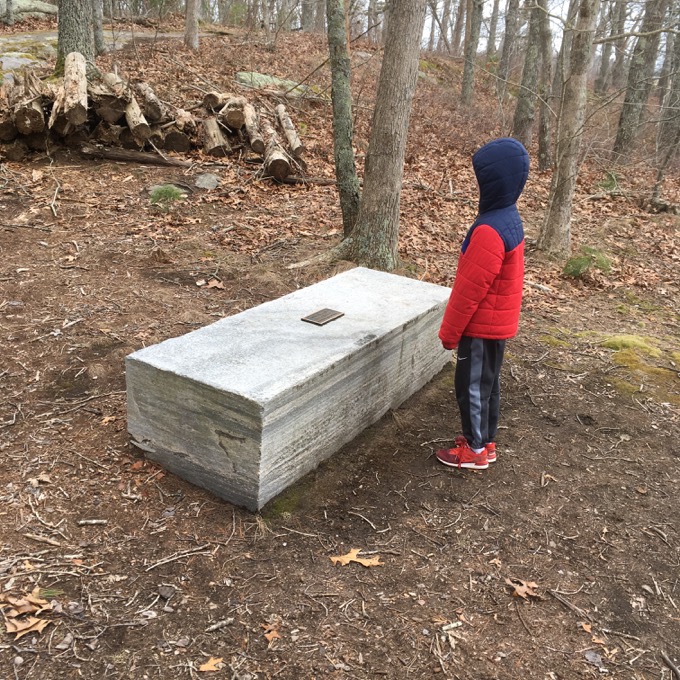 We moved on to what I think is the true Watch Rock which affords views of 270-degrees or so. Let this serve as yet another notice to professional photographers – some great opportunities here with the driftwood, pitch pines, and sunrise possibilities. 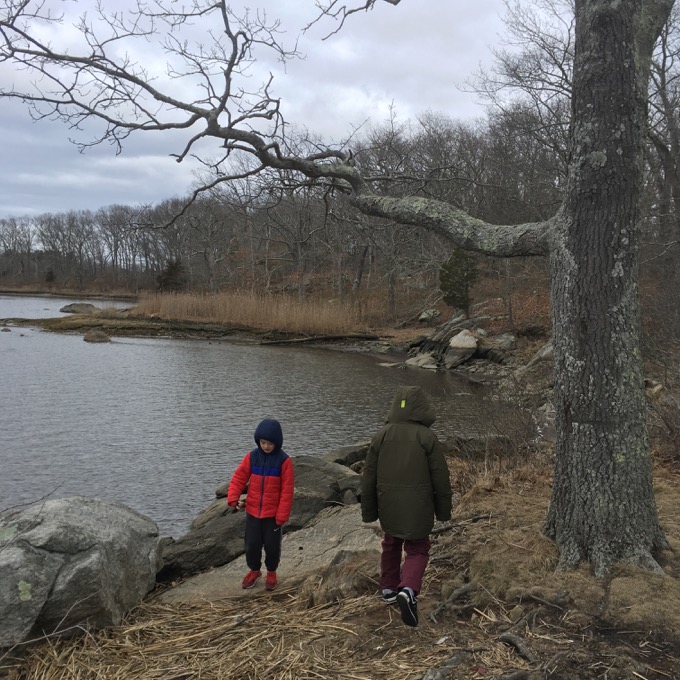 As I was taking it all in, Calvin approached me with a fish skeleton. Ok then. He wanted to keep it and put it in his “nature box” of stuff he finds and likes on our hikes. It was picked clean so I carried it to the car and put it in a bag in the trunk. 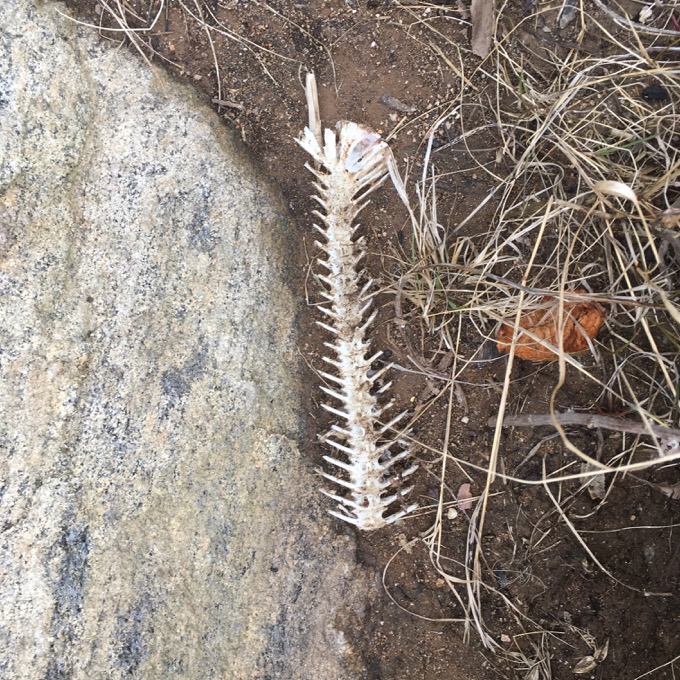 A day later, I smelled it again and… no. It wasn’t picked clean clean. Sorry, kid. You’ll always have your memories.

We walked the fairly short trail back to the car and went to lunch. 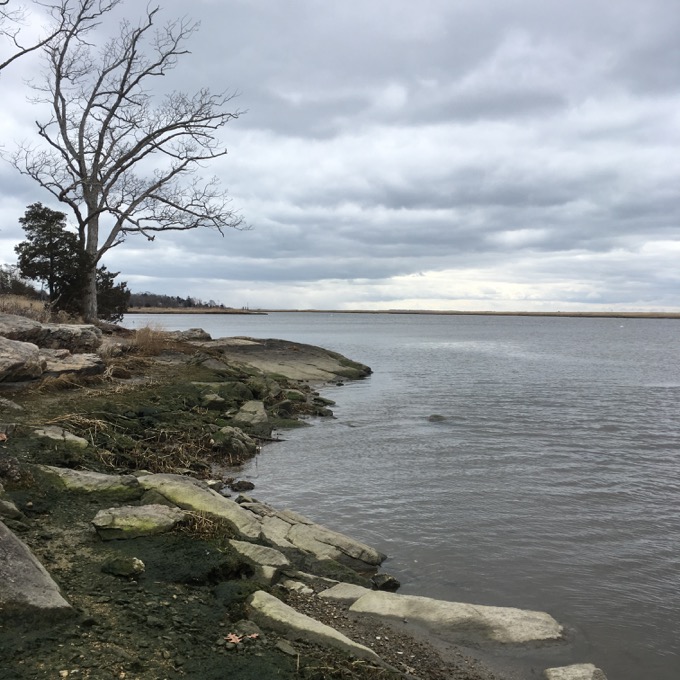 Damian had the fish… which he didn’t bring home.