There aren’t too many national championship events that happen in Connecticut. Sure, we have our UConn Huskies, but those games are never played here. I’m sure Trinity College’s squash teams have won a few in Hartford, and the NCAA men’s lacrosse national championships have been at the Rent in East Hartford a few times. 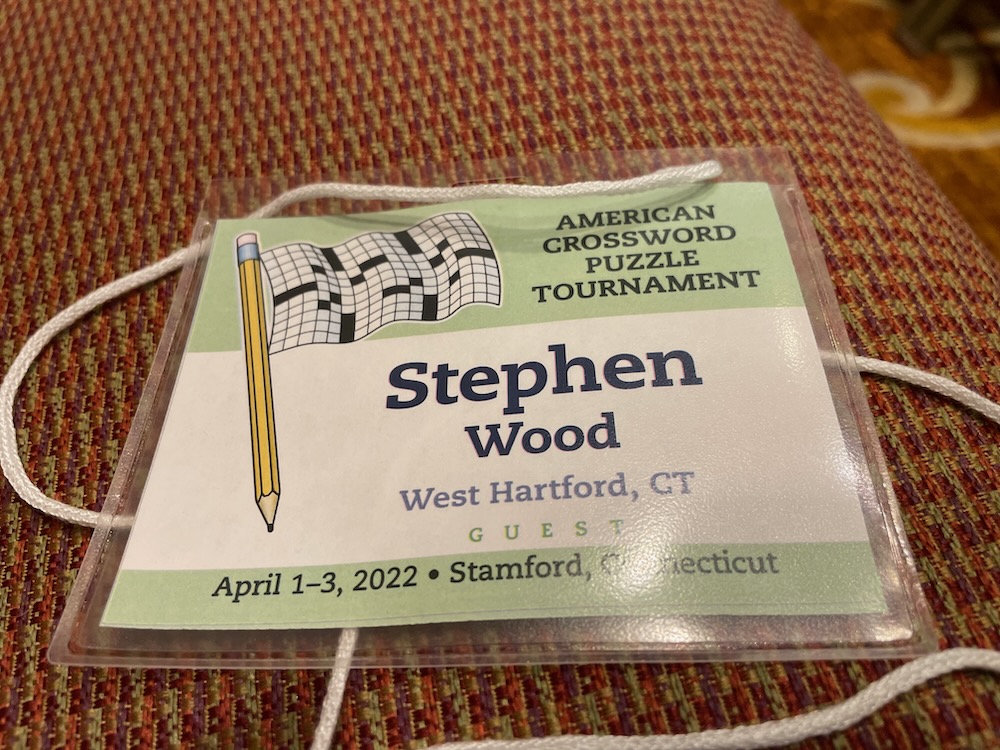 But there’s nothing with the history and staying power like the American Crossword Puzzle Tournament, held at the same Marriott hotel for almost all of its existence. I attended the 44th annual event. Holy cow, this thing is almost as old as I am.

How and why this thing wound up at a Stamford hotel is beyond me. Granted, it is right off of I-95, a stones throw from the train station, and just far enough outside of the craziness of New York City, but still… this a New York Times thing. Held in Connecticut. for 44 years. 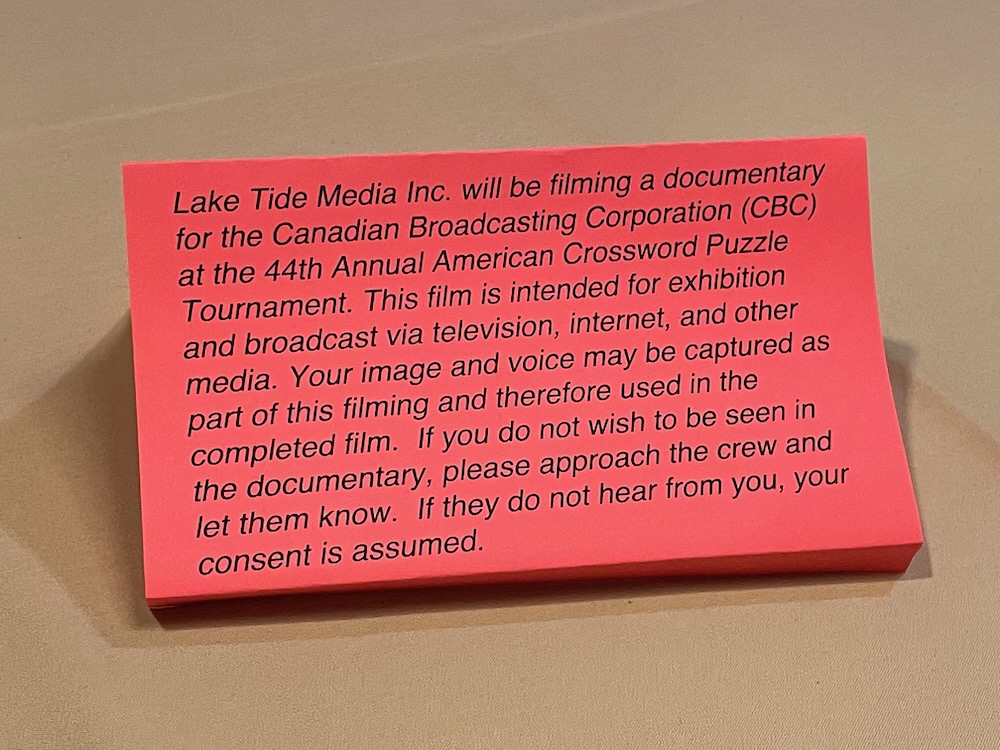 Oh yeah. I’ll definitely be on this if it ever sees the light of day

Whatever, I’ll take it. As a crossword lover and actual fanboy of certain constructors, the fact that I can attend and compete at the ACPT without any logistical trouble is pretty darn cool. 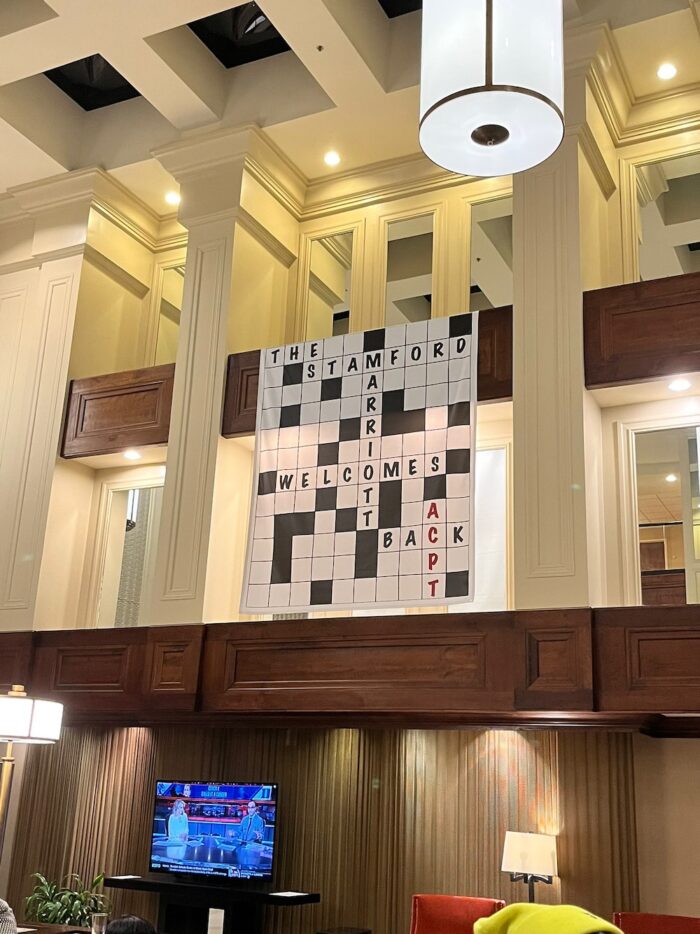 I’m sure some of you have seen the 2006 documentary “Wordplay” which featured the tournament – and a very young Tyler Hinman, who remains a top solver. (Full disclosure, I’ve watched one Twitch streamer in my life and yes, that’s Tyler Hinman. I literally watch him solve puzzles, drink lager, and make comments as he does so, often with a Braves game on in the background, that he also comments on, while solving tough puzzles in minutes. Dude is a legend.)

Directed by New York Times Crossword Puzzle Editor Will Shortz, this is the nation’s oldest and largest crossword competition. Solvers tackle eight original crosswords created and edited specially for this event. Scoring is based on accuracy and speed. Prizes are awarded in more than 20 categories, including a $3,000 grand prize. It’s a whole thing with evening games, puzzles, and entertainment at the hotel. With the proliferation of online forums, it’s cool to see online friends meet in real life. 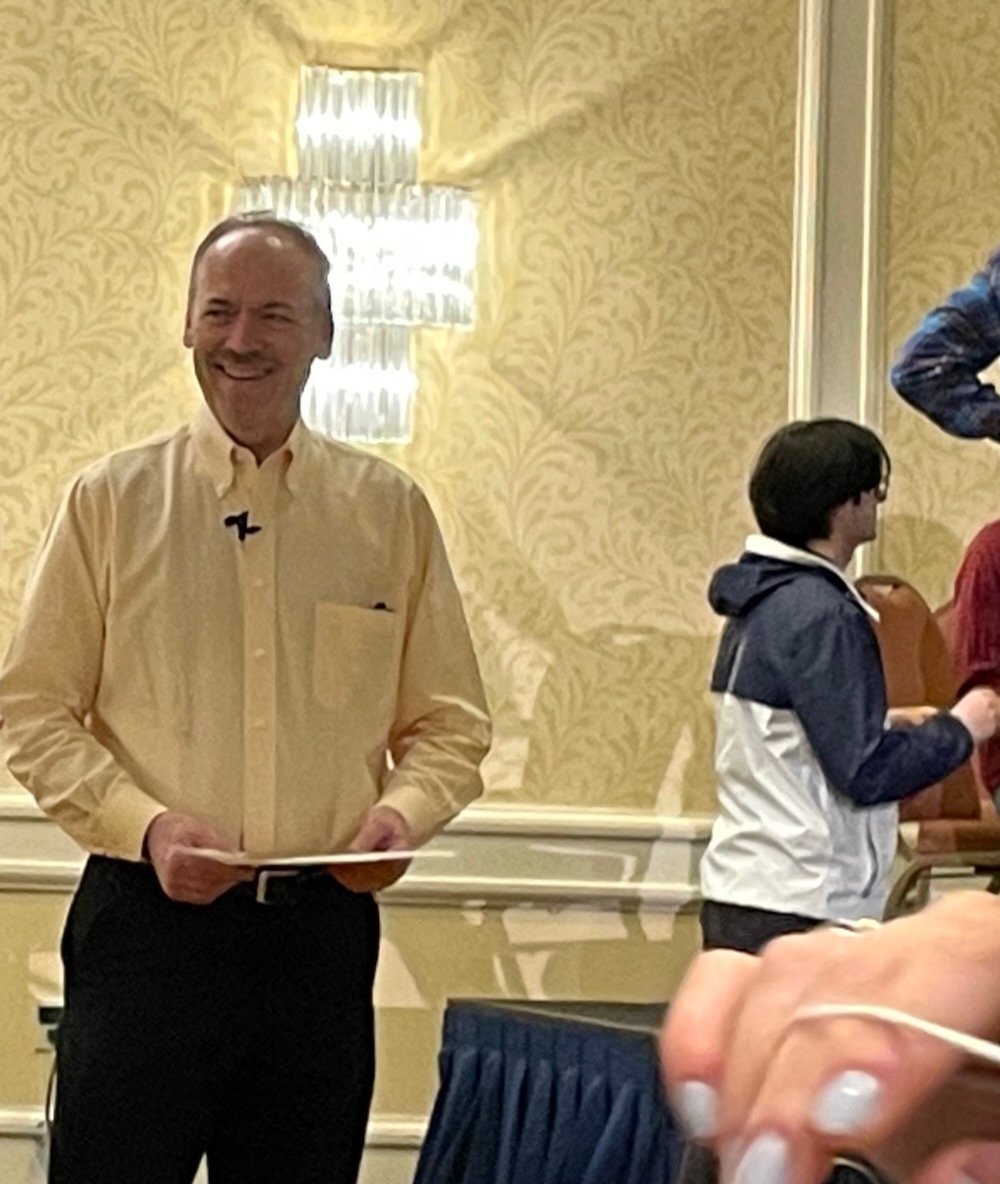 Will Shortz smiled at me! OMG

Constructors put piles of their puzzles all over the lobby and meeting rooms for solvers to grab and go. The crowd is overwhelmingly white and old… and New York and Connecticut-based. (After Wordplay came out, the tournament moved to a larger venue in Brooklyn for a couple years, but once that tempered, it moved back to its historic home.)

I didn’t compete and only showed up for the final day on Sunday. (I’ve got other things to do, but moreover, no matter how good I think I am… I am not that good.) So I missed the Friday evening wine and cheese gathering and all the preliminary puzzling on Saturday. Anyone can participate, although registration is limited, so maybe I will someday. You compete in at least two divisions at once, based on geography and age. Then there’s the skill level division as well. And this whole thing is for fun, as the tippy top prize for the winner in the top division is only $3,000. This is a community, and the top solvers take it fairly seriously, but the mood is convivial and fun. I’m a Hinman fan because he’s a self-effacing goofball and is always quick with a joke, win or lose. 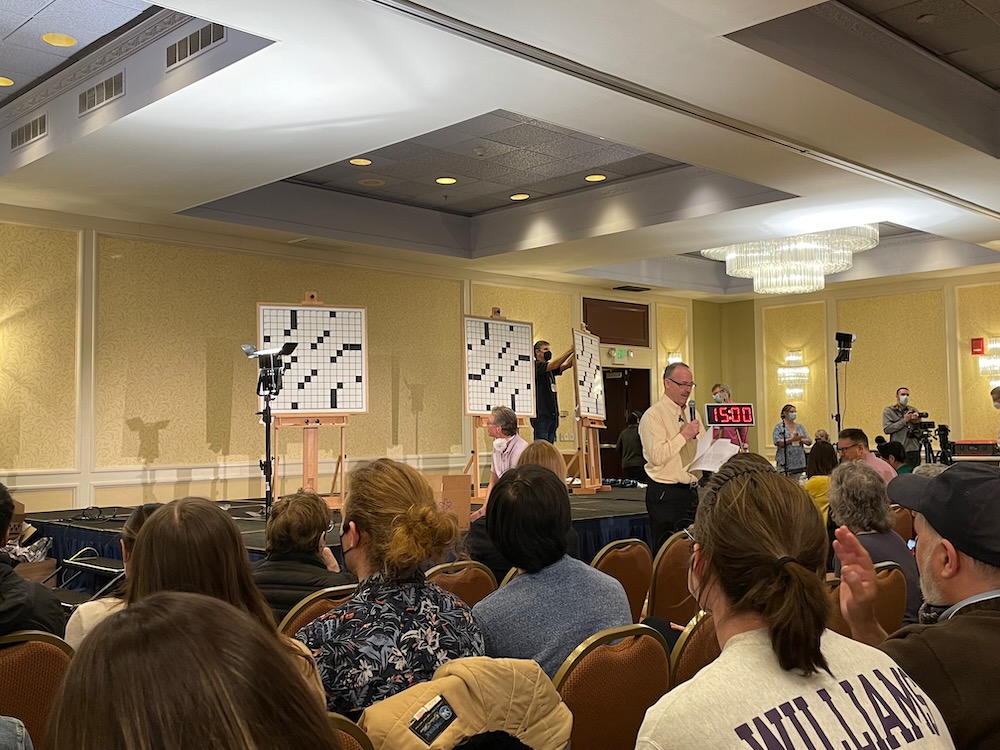 For a fairly competent solver like me, having this tournament 90 minutes away every year is just the coolest. If you care to know the [11-letter “rhyming fundamentals] (NITTYGRITTY), here you are:

The main part of the tournament consists of seven rounds, each featuring a puzzle that all competitors solve. There are three rounds in the late morning and three in the early afternoon on Saturday, and the seventh round is on Sunday. Puzzles vary in size and difficulty from round to round. The puzzles are commissioned by Shortz from the top constructors in crosswords, with the fifth puzzle the hardest of the first six. The two three-round sessions consist of puzzles with 15, 17 and 19 squares in each row and column respectively. The Sunday puzzle is appropriately 21 x 21 squares, the size of regulation Sunday puzzles in newspapers. Tournament judges score the solved puzzles on accuracy and speed, and the puzzles are scanned and ranked. Judges typically include many of the nation’s most prolific and/or well known crossword constructors and editors.

After these seven rounds, the top three solvers in the top three divisions progress to the final round, which consists of solving a very difficult crossword of 15 × 15 size on an oversize grid on a stage at the front of the tournament room. The competitors in this round wear noise-blocking headphones so that a team of commentators can remark upon the action for the spectators. The solvers hold a sheet of clues and write their answers on the grid with a dry-erase marker for all to see. Accuracy and speed are important as the competitors are ranked by fewest mistakes, then time. The winner of this round is declared the U.S. crossword tournament champion. The top three competitors in the B and C divisions also compete on the same puzzle, though with different sets of clues,[citation needed] for their division titles.

They give a fun prize for neatest handwriting, which is pretty funny. The top solvers go so fast… it’s amazing they are legible at all.

While I took in the scene waiting for the finals, I started seeing more crossword community stars. Paolo Pasco (I like his puzzles), Brendan Emmett Quigley (B.E.Q. to fans, with whom I don’t always vibe), and others. Pasco competed and absolutely crushed the B division. I like this picture from the New York Times from the 2022 tournament – that’s Pasco on the left looking like he’s cheating. (He is not cheating, he’s just done before everyone.) 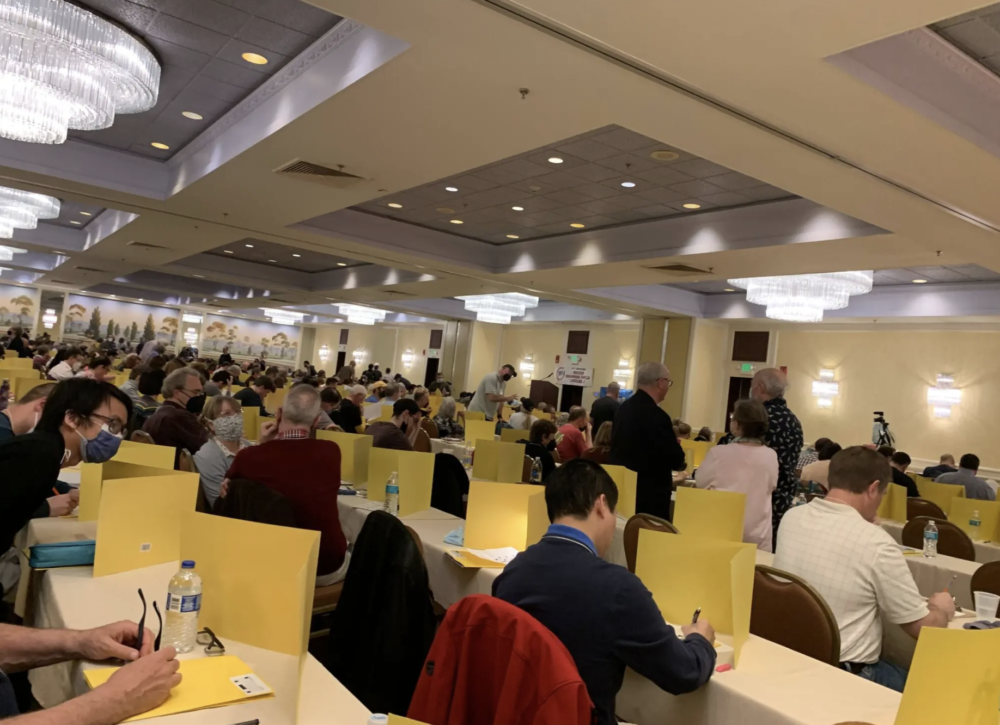 Alright, if you’re into this sort of thing, you get it. If you’re not, you’re confused as to why I think this event is CTMQ-worthy. Either way, let’s skip to the finals.

Hundreds of us gathered in the Marriott’s large ballroom to watch. Will Shortz emceed the proceedings and introduced a bunch of Yale theater students who then put on the first act of an entire musical that had to do with a fictional crossword-based gameshow. I have no idea why this happened and while the actors were earnest and talented, it was all very strange to me. And it was an hour long. This was not what I’d come to see. 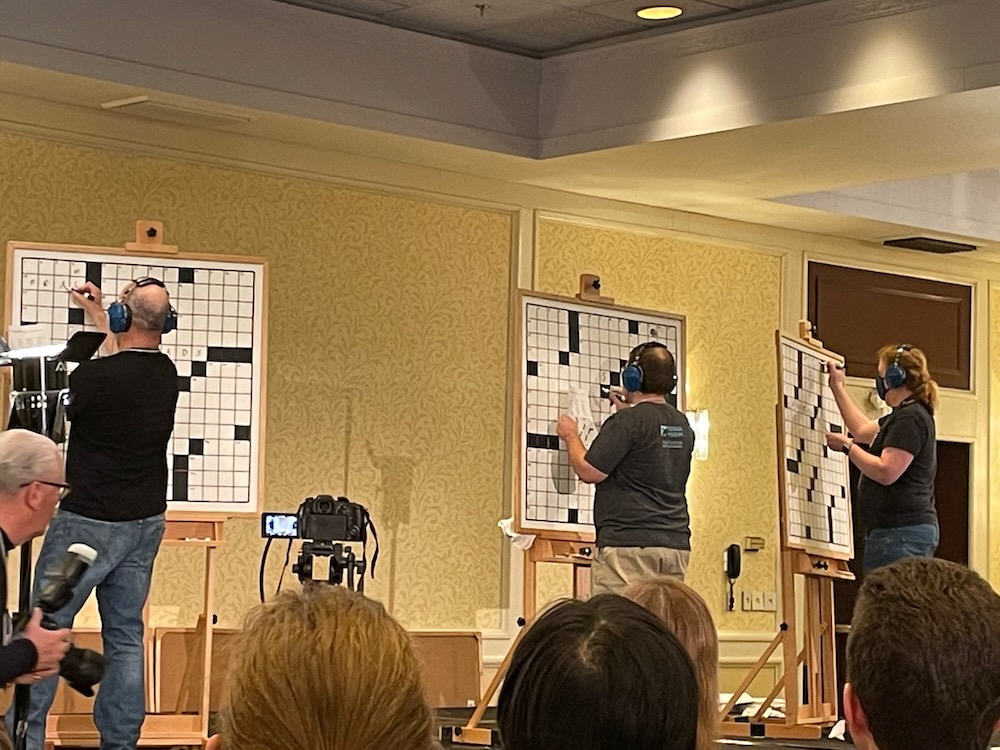 They finally finished and the relief around the room was palpable. It was time. Three groups of three would compete on stage in the finals. They’d all complete the same grid, clued by Wyna Liu at three different difficulty levels. So yes, we spectators would watch three crossword races filling in the same words three times.

I see you shaking your head. Stop. It was fun!

The finalists wear bulky headphones with white noise pumped in for silence. NPR personalities commentate – not kidding. They were mildly entertaining I suppose. The three final finalists, Tyler Hinman among them, are rather impressive. It wasn’t the hardest puzzle, but to be able to hold the clues in hand, write on a vertical giant white board with huge headphones on with 300 people staring at you for all the marbles… can’t be easy. 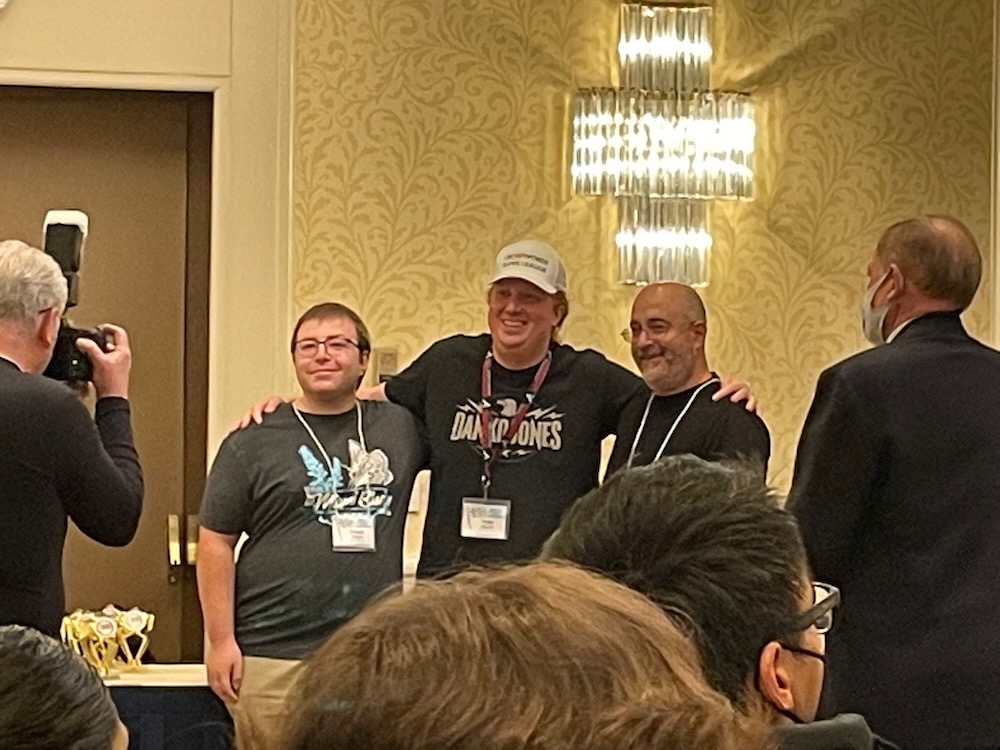 Audience members were given the final puzzles, clued at all three levels, to do with what we pleased. I could not even pretend to sniff the level all the finalists were at.

And just like that, it was over. I grabbed the stack of all eight of the tournament’s puzzles and left. I went over to Half Full’s Third Place, ordered a beer, and did the tournament’s first (easiest) puzzle while timing myself. I did it in about 6 minutes which I’ll say equates to maybe four and a half in a more appropriate setting. 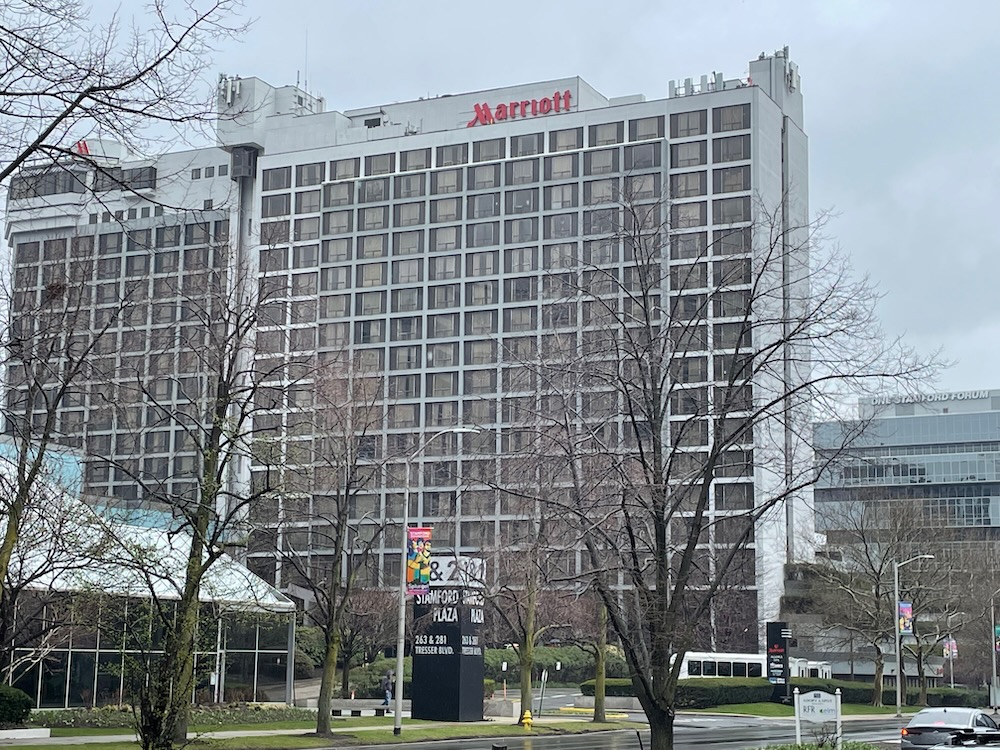