This is one of those pages where I could write 10,000 words, link to 50 other sites, or just quickly type whatever comes to my head while providing some context. I’ll opt for the latter – with some pertinent links at the bottom. 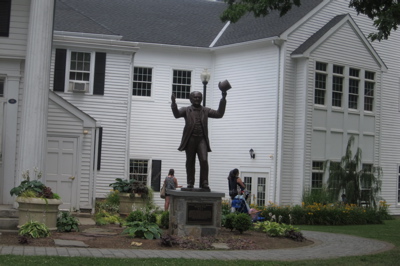 P.T. Barnum, as everyone knows, was a master marketeer, showman, liar, genius… all well before his time. Imagine Barnum with the power of TV? Or the Internet? My word. Barnum was born, raised and lived a goodly while in tiny Bethel.

Bethel’s Historical Society devotes much of their efforts to Barnum (although I have learned that Bethel was home to a huge comb industry at one time, as well as the first vodka distillery in the US).

The town commissioned a statue of Barnum to celebrate his 200th birthday and placed him in front of the library. There are so many good articles about Barnum and this statue and his legacy… Here’s one from Yankee Magazine.

Here’s another New York Times article on Barnum, Bethel and the statue

But I turn to my friend at CT Monuments.net for some great background on the statue itself.

The statue, dedicated to mark the 200th anniversary of Barnum’s 1810 birth in Bethel, depicts Barnum raising his hat as he departs the town to seek his fortune. Barnum’s career would include creating a curiosity museum in New York and the circus that still bears his name, as well as political and charitable contributions to Bridgeport.

“I really liked the symbolism of Barnum throwing his hat into the ring,” Dave says. “You always see a lot of photos of Barnum with the hat, so we decided early on to include that in the theme. I also felt strongly that I wanted to have him taking a step forward into the world. Barnum was a vibrant man of action, and I couldn’t conceive of portraying him seated.”

The top hat, while being historically accurate, also pays tribute to Bethel’s former role as a hat manufacturing center.

I’ll return someday to get a much better picture.