Did you know that the Phantom Gourmet is still a thing? It is. I just checked. You know, the mysterious secret restaurant critic(s) that slip into restaurants to rate them. Just an anonymous critic with a whole cloak and dagger mystique. 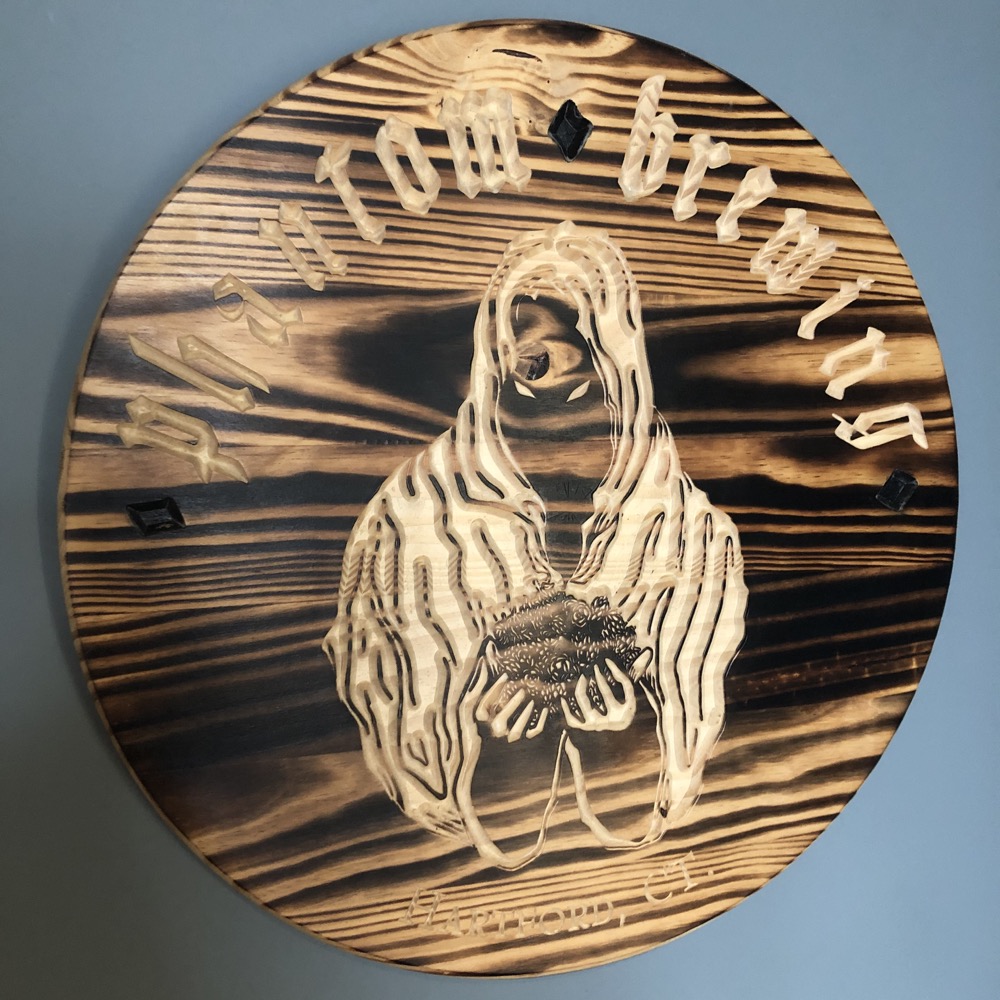 I just skimmed through a bunch of Connecticut entries (which date back a couple decades on their website) and it appears they’re all about positivity. I looked at some bad, failed restaurants and they all scored fairly well. Which is nice.

I’m not so nice. But I am a bit of a Phantom type myself. But that’s more of a personality flaw of mine more than anything else. I just want to chill out and drink some beers and do my crossword puzzles and generally be left alone. Once I’m outed as “that guy,” I have to talk about beer and breweries and accept free pours and then I have to think about stuff too hard when I get to this point of writing about a place. I’m not cut out for that. 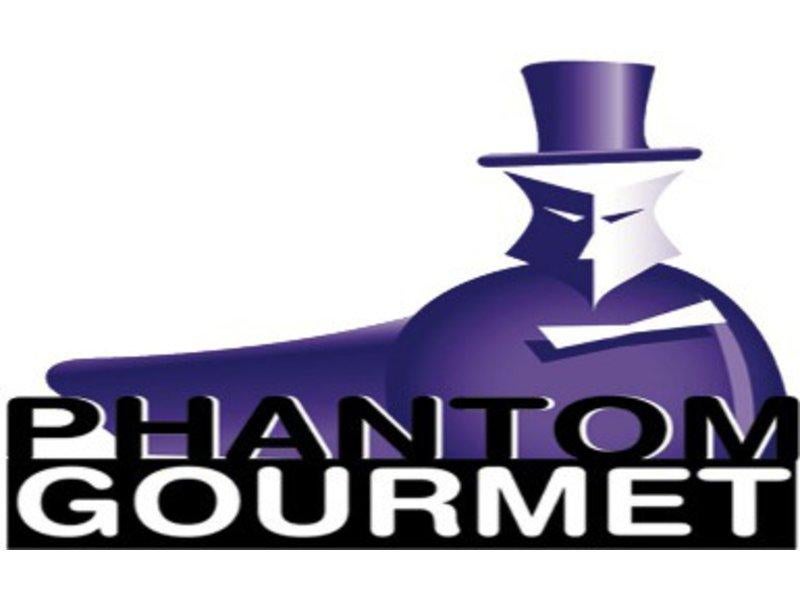 Phantom Brewery’s co-founder and brewer Jon Patrei is the opposite of all that. He’s active on local beer social media and is gregarious and self-promotional. Which is, of course, a very good thing for a guy who opened a small brewery during a pandemic in a nearly forgotten strip of industrial businesses in Hartford’s South End.

Jon had reached out to me a few months before opening and invited me in. Heck, if I remember correctly he specifically asked me to come down, meet him, drink his beers, and tell him everything that’s wrong with them in a humorous yet honest way. I politely declined his offer, suggesting that I tend to wait a few months before visiting a brewery and, well, the whole Phantom thing. 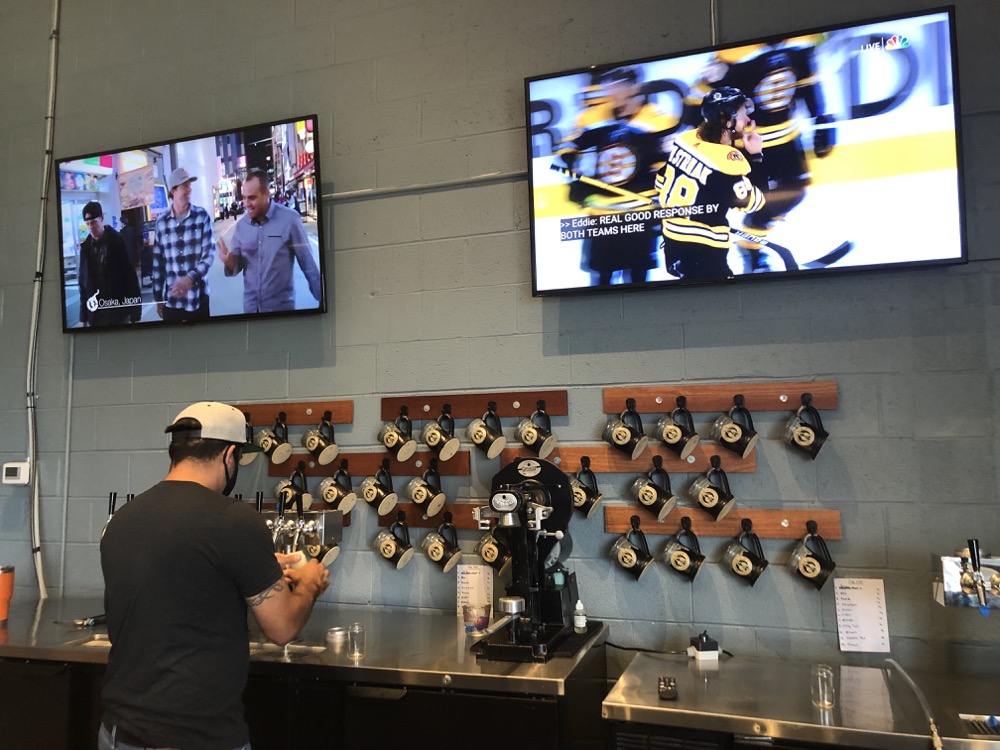 From what I can tell, people like Jon. Quickly scanning his social media, he’s an avid promoter of fellow local breweries and seems to get around. Friends of mine – which do exist, I promise – have told me they like Jon. Therefore, I like Jon. Let’s hope I like Jon’s beer.

2020 was a weird year. The COVID pandemic and all. Amazingly nearly a dozen breweries opened in Connecticut in the midst of it all – and only a few shuttered. People need their beer and since breweries were generally allowed to be open for most of the year, they survived into 2021. 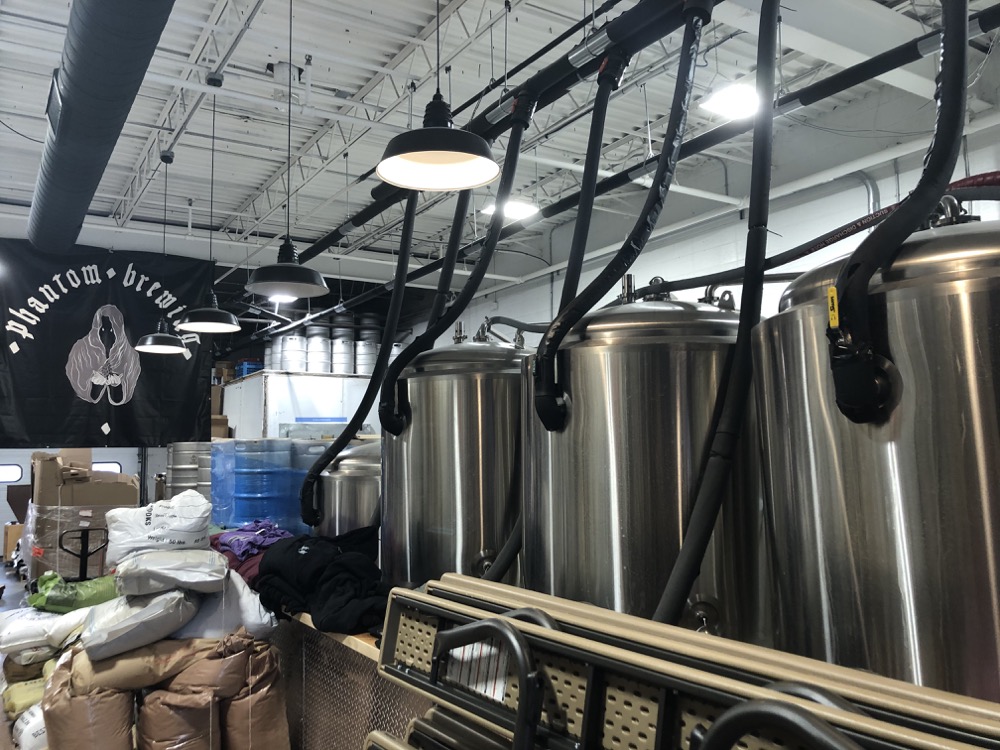 Phantom shares space with a brew and wine hobby shop. It is in a plaza that also houses restaurant supply warehouses, granite stores, and an Airgas facility. An outdoor patio won’t be the most attractive addition here, that’s for sure. But Phantom converted the front of the store into a tidy little taproom with (non-pandemic) seating for maybe 25 patrons.

It’s impressive what they’ve done with what they had to work with. Even if there’s quite literally, a store in what is in reality the same space. It was also impressive that Phantom had 10 beers on tap during my visit. An NHL game was not only on TV, but the sound was being piped to the taproom. Pandemic spacing rules were in place which isn’t ideal for small rooms like this. Service was attentive and friendly. I scored a table for myself and all my friends. 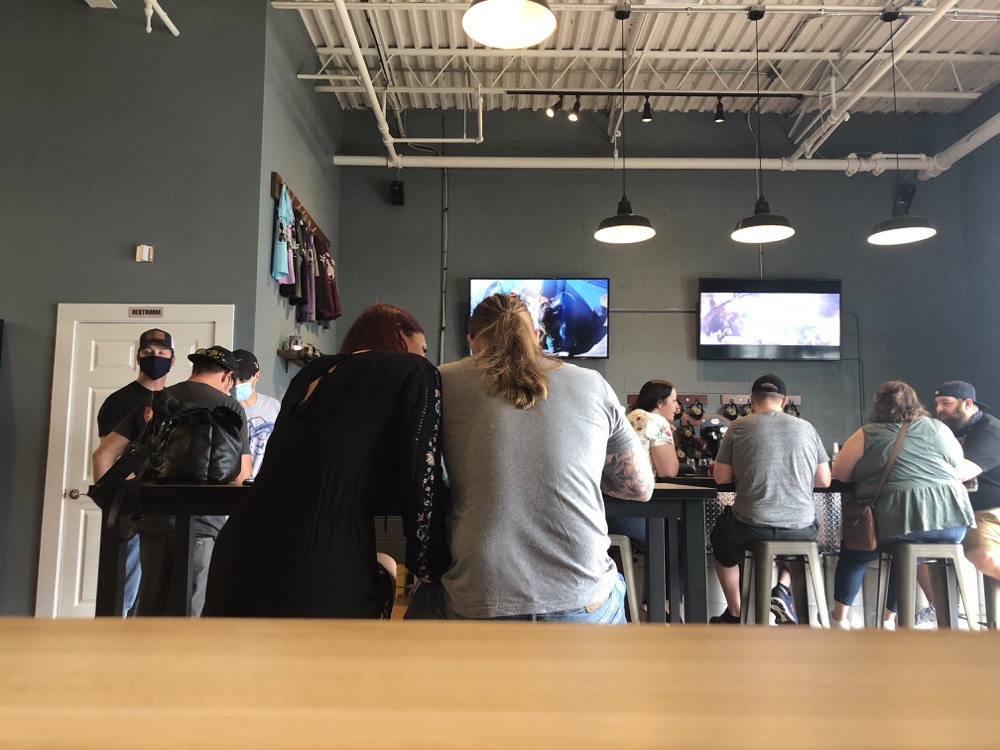 I had no friends with me. Anyway, while Phantom certainly plays to the 2020 consumer palate with a slew of NEIPAs, DIPAs, kettle “sours” which bear no resemblance to actual sour beers, and a pastry stout or two, they also are sure to cater to actual beer drinkers with a Helles, a blonde, and a couple others. Hats off to Phantom.

I ordered a flight: King Tut NEIPA, Munich Helles Lager, Phantazma Berliner Weiss with Peach, and Serenity in Silence, a Farmhouse Ale of some sort. (I realized later that there were two dark beers on the back side of the menu, which stinks because I’d have gotten the traditional English brown ale. Oh well… Phantom also has hard seltzers from somewhere available as well as a few mixed drinks and snacking foods. Turn over your menus, people!) 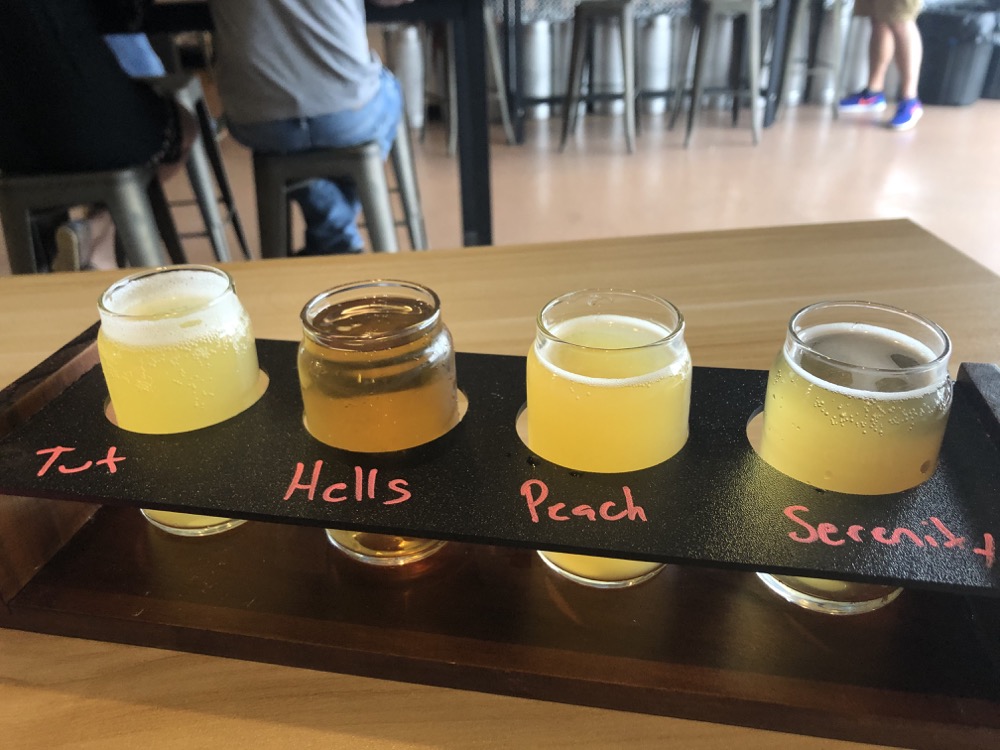 Look at that picture again. “Hells” I LOL’d at that misspelling, but warily eyed one of the more difficult styles to perfect, especially for a nascent brewery. I started with it and the lager was super dry. Pure biscuit. In fact, my notes on this beer are, “dry, dry, dry, biscuit out the butt.” As you can see, I’m very thorough and professional in my assessments. Just like the Phantom Gourmet! I’ve never been to Munich, but I’ve had lagers in other German cities and they were never this far into the crackery dry spectrum.

The peach Berliner, however, was above expectations. Here, Phantom didn’t go overboard with the flavor additions and I found the beer to be pleasant and refreshing. Again, fans of their pastry stouts seem to feel the same way – insofar as pastry stouts can be done deftly. (I’ve no use for them in my life, but if you do, apparently Phantom’s are really good.) 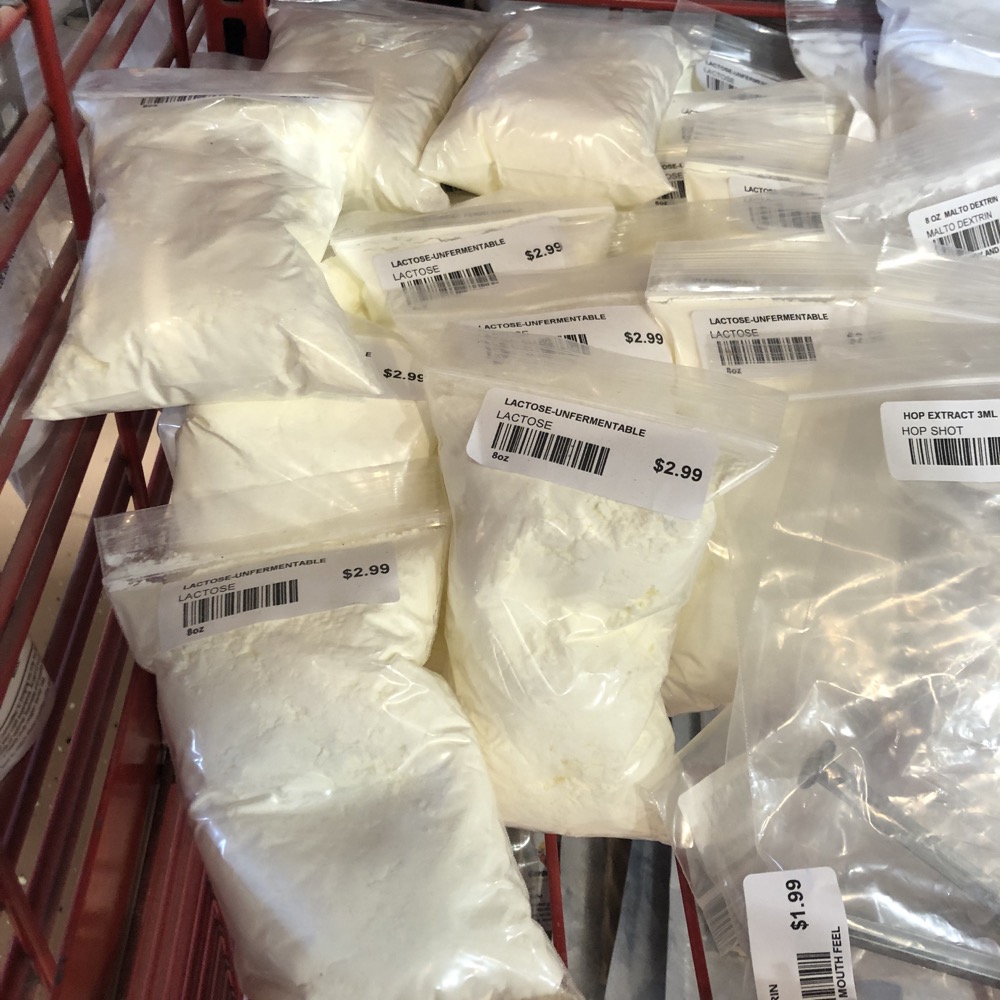 Seen in the store section… I thought about buying it all just to burn it. If you’re not making a milk stout… oh, never mind. It’s hopeless.

The farmhouse was nothing to write home about, as I didn’t write any notes about it. That means it was neither bad nor great, so we’ll call it good. I finished with the NEIPA. Phantom has built a decent little fanbase for its hazy and previously mentioned pastry efforts. I found King Tut to be just okay. It is the expected “citrusy” NEIPA-ish beer, but it didn’t have the usual softness, as it was almost over carbonated… for the style anyway. Granted, this made it a bit more like a “normal” IPA which I usually appreciate, but it was sort of in the middle of what it wants to be and what it doesn’t.

These nitpicks are just that; nitpicks. They are the result of being a new brewery. All four beers were fine and inline with what I’d expected from Phantom. I am confident that if I were to return in August of 2021, everything would be better. But if I do return, I’m sure I’ll do it on the downlow again. 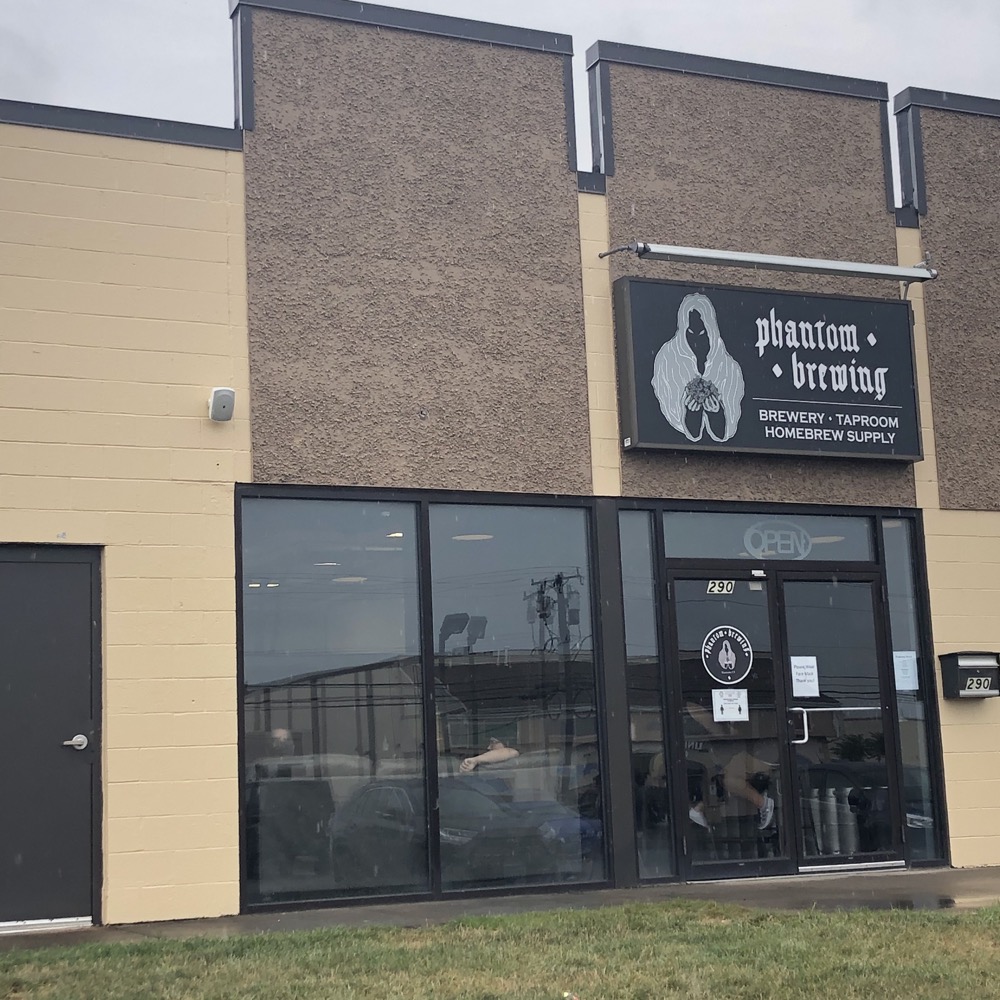