This movie is no longer available on YouTube. You lose.

Rising Star is not a good movie. And yet…

And yet it is the exact type of movie for which I created my massive “Connecticut Movies” list. Therefore, I love it. I love its earnestness and its commitment to Hartford. And goshdarnit, they got me with the triple title pun.

The entire production was a local one, from the writer/director to the actors to the crew to the shot locations. Pure Hartford through and through – New England’s Rising Star! Yes, the capital city serves as the backdrop in a movie about a guy with a previous NASA internship who still loves astronomy! Who stands up to his boss at his insurance company and gains his respect! A Rising Star Rising Star in the Rising Star! 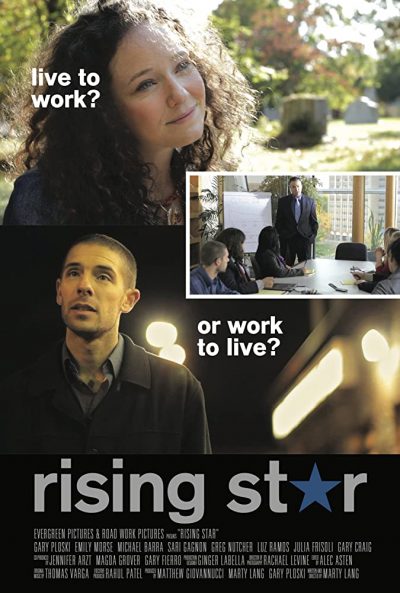 This is an amateur, independent, no budget effort, so it’s not like my expectations were high. Heck, this thing was funded in part by a Kickstarter campaign. It is an earnest movie; one of the most earnest I’ve ever seen.

We meet Chris, a rather bland guy who “lives near Bushnell Park” and is employed at “Nutmeg Insurance” as a claims adjudicator. He doesn’t really like his job and his boss is a jerk, but he recognizes the importance of, y’know, income.

He is perpetually late. Which is weird, because his parking spot at his apartment is right outside the door. Then he drives to the Candy Cane Building for some insane reason. And get this: He lives at 55 On the Park at Jewell and Trumbull. (Here’s where we see him leave the building.) 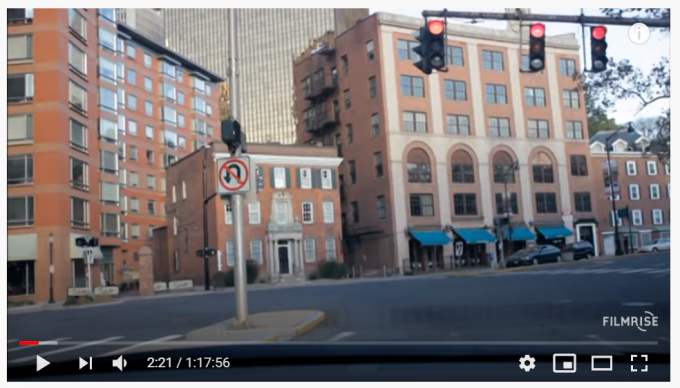 My man drives around the block the wrong way and then comes to the light right back in front of his building at Jewell and Trumbull! AND HE WAITS AT THE RED LIGHT EVEN THOUGH HE’S LATE FOR WORK!

Firstly, to drive from 55 Trumbull Street to 10 Columbus Boulevard during (presumably) morning rush hour on a nice day is beyond idiotic. That’s what? Like 2/3 of a mile? Secondly, dude, this is Hartford! You don’t wait at red lights when there’s no traffic! Especially if its on a slight right curve which is kind of like a right on red in the Hartford Universe where traffic laws simply don’t exist! This guy is a simp.

He gets to work – and yeah, it’s really cool to watch a movie that is shot entirely in Hartford. See? Here he is getting to work: 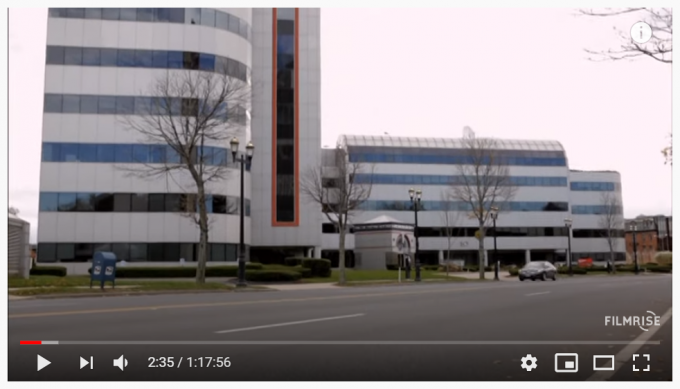 (And yes, I know I’m being ridiculous with my criticisms, but it is kind of funny that probably 90% of the people who have seen this movie are familiar with Hartford.)

At work he learns that his company will be cutting 10% of the staff and that in order to prove their worth, they must come in the next day – a Saturday. This is a bummer for all involved.

Chris’s work friend Brent is throwing a party, so Chris drives(!) to City Steam for some pre-gaming action. There, he sees his recent ex-girlfriend with some guy and, inexplicably, another coworker making out with some other guy. This bums him out so he orders and downs five shots of vodka – illegal in Connecticut, and would never happen at an upstanding bar like City Steam.

It is decided that he can’t “drive home,” which is smart but again, my man lives a mere four-minute walk down the Street. So he goes to Brent’s party with the weird coworker. At Brent’s, he meets Alyza, a perpetually smiling relatively attractive young woman and they hit it off. (They’d “met” incidentally via a dating app previously.) They make out and he passes out. In a bathtub.

They wake and Chris has lost his keys but he gets a ride back to City Steam with Alyza and the day’s crazy adventure begins! Alas, he is to be at work at noon to prove his worth! OMG!

The “morning manager” at City Steam can’t access the vault to get the lost keys, so she gives Chris the owner’s home address(!), Chris and Alyza go to the house(!), and are let inside(!) by the owner’s wife(!) who gives them coffee(!) and doesn’t seem remotely weirded out by this intrusion.

The owner isn’t home but is said to be returning later. With time to kill and a relationship to develop, Alyza takes control. Chris asks her, “what are you doing tonight?”

“I go to Sully’s on Saturdays,” she replies.

“Over on Park Street,” she giggles.

“Park Street? Isn’t that a dangerous part of town?”

Hoo boy. Sully’s Pub was on the West Hartford border! (It has since closed.) Chris is such a dork. He seems fearful about her Frog Hollow address and wonders about all the shootings that occur there. Alyza merely says, “It is what it is.”

The two get on a bus at New Park and Park and Chris is all freaked out by the people of color on the – gasp! – bus. Local unfunny morning man Gary Craig is driving the bus, and for the first time in my life, I laughed at something Gary Craig did.

Alyza, ever curious about Chris’s life, asks him to explain his daily grind as an insurance adjuster.

I sent that scene to a friend of mine in this line of work to get his take on it.

Where do you find this stuff?

This was a funny way to respond, since this very same friend has sent me Connecticut movies previously. Anyway…

There’s way more of a customer service aspect to that job than they explain and the morning meetings are more reserved for management. It basically sounds like how someone imagines an adjusters job as opposed to the reality. The math guy explanation was almost a more boring way to describe it.

The two wind up at the Mark Twain House and take the tour. This is where Alyza learns Chris is into astronomy and thus begins her pestering him about “following his dreams” and “leaving his humdrum job.” As a bohemian roustabout who makes her own clothes, I found this whole thing annoying.

They leave the museum and – one of the great Hartford tragedies makes a cameo: 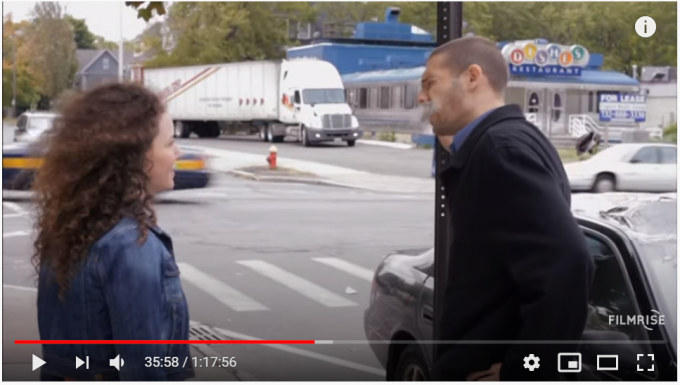 Dishes Diner! Which was awesome in the 1990’s as The Comet – as long as you were into cramped spaces and stiff drinks. It was the Aetna Diner before that, but it has been vacant for years. (You can see the For Lease sign above.)

The couple walks from The Twain House to Cedar Hill Cemetery, which is quite a feat. But this was the best part of the movie; Alyza takes Chris to Wallace Stevens’s grave and tells him how Stevens was an executive at The Hartford but also one of the best American poets in history. See? You can work at your crap job and stargaze, Chris!

The most annoying part of the movie is when Chris gently probes Alyza for some personal information and she gets all snippy with him. She’s asked him a billion questions and he can’t ask her any? Lame. 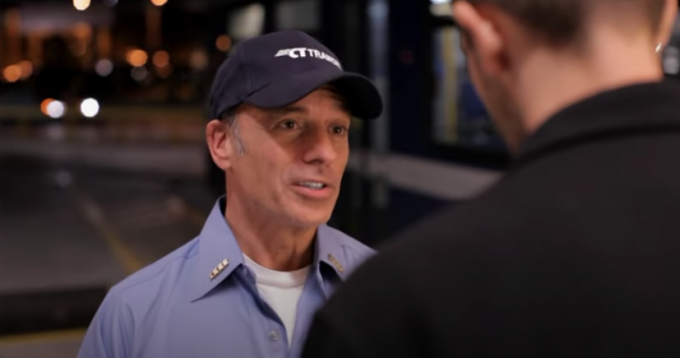 They walk past the old Spaghetti Warehouse and find the City Steam manager who gives them the keys to the vault(!) after which they walk through Bushnell Park and Alyza dances like a weirdo there but it’s kind of cute I guess.

(I must mention that I found it distracting that during their walk back and forth across Bushnell Park, it was clear blue sunny and rainy-gray off and on several times. Hilariously so. I get that when you have no budget, you take what you get, but… this was just too much.)

Meanwhile, it’s around noon and Chris still isn’t at work. He’s now at Alchemy Juice Bar across town at Trinity. He begins to worry and Alyza doesn’t understand. LADY, IT’S HIS JOB! Her dismissive attitude about this is ridiculous. These aren’t kids, they’re adults. Chris has had enough of her immaturity and leaves her.

At City Steam, the keys in the vault aren’t Chris’s. It’s now nighttime and he walks to Union Station and runs into Gary Craig who remembers Chris’s racist reaction to the other riders earlier and gives some very important life advice like, “when you don’t have a family, you can do whatever you want.” He then offers Chris a ride on the bus to wherever he wants, because that’s what CT Transit bus drivers can do apparently.

Chris thanks Gary Craig, but leaves him for the moment, for Chris has to now walk to Frog Hollow to find Alyza at her apartment. She’s not there, so he walks to one of her hangouts, Alchemy Juice Bar. She’s not there either, but a-ha! Sully’s Pub! 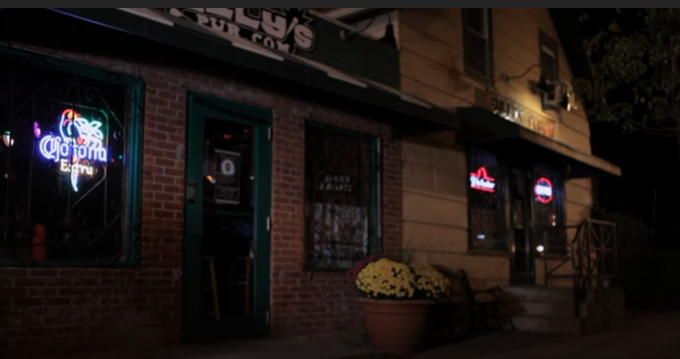 My man then walks the full length of Park Street, past some black people who scare him, to the bar. He first stops in a clothing store, which is open at midnight luckily, to get some fresh threads to “stand out” for Alyza.

There is one line – that I hope was self-effacing self-awareness – when Chris sighs and says to no one in particular, “Everything is within walking distance in Hartford.” While this is generally true, and I made fun of him for driving to work, my man has walked a lot in loafers in a day.

Alyza is at Sully’s and she’s there to rap on open mic night. So is Brent, his friend from work. Brent is apparently the man at rap open mic, and the ladies are all attracted to him. (Brent is not an attractive man.) Alyza’s rap is painful.

Like, it hurt me to my very core. Brent’s rap was just as awful.

Alyza and Chris make up and they both admit their mistakes and they make out in the soft glow of the Sully’s Park Street light.

At some point they also go to the Connecticut Science Center to gaze upon I-91 and East Hartford from the observation deck, at which point Alyza becomes putty in Chris’s hands. A day late, Chris goes to work and confronts his boss; explaining why he didn’t come in on Saturday and proceeds to get all of his work done.

The movie ends with Chris taking the elevator UP instead of down, so he can pursue his dreams of stargazing from the light-polluted roof of the Candy Cane Building.

The tagline of the movie is “Do we work to live or live to work?” Heavy stuff. My issue with that, and with this movie, is Alyza is a bum. Sure, being a carefree hippie spirit is cool and and making one’s own clothes and living in Frog Hollow are money-saving endeavors, but Chris has a college degree and a decent job and lives at 55 Park. He’s only miserable because he’s a miserable person.

I worked at Aetna for a decade and have been doing research and data analysis for LEGO and another company as a manager for longer. My passion is CTMQ. I get both done, and I have a family, Gary Craig. Chris is just a drag.

Again, this is not a good movie – while the acting is passable and the actual dialog is acceptable… for me, the overall theme of the thing was just too banal.

But hey, our fair Hartford, New England’s Rising Star, was a costar, so that’s cool.

CTMQ Rating: 2 out of 5 thumbs up
Connecticutness: 169 out of 169 Nutmegs!
Filmed in Connecticut? Yes, entirely!
Wealthy Caucasian with a Big House? Not unless you include Mark Twain 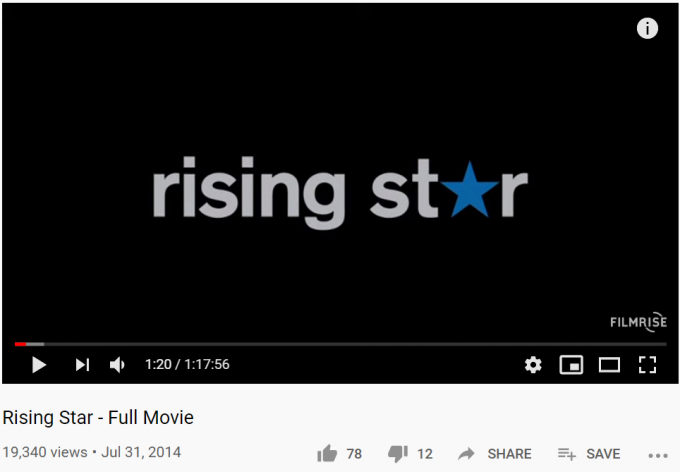