This was an interesting hike with Calvin. 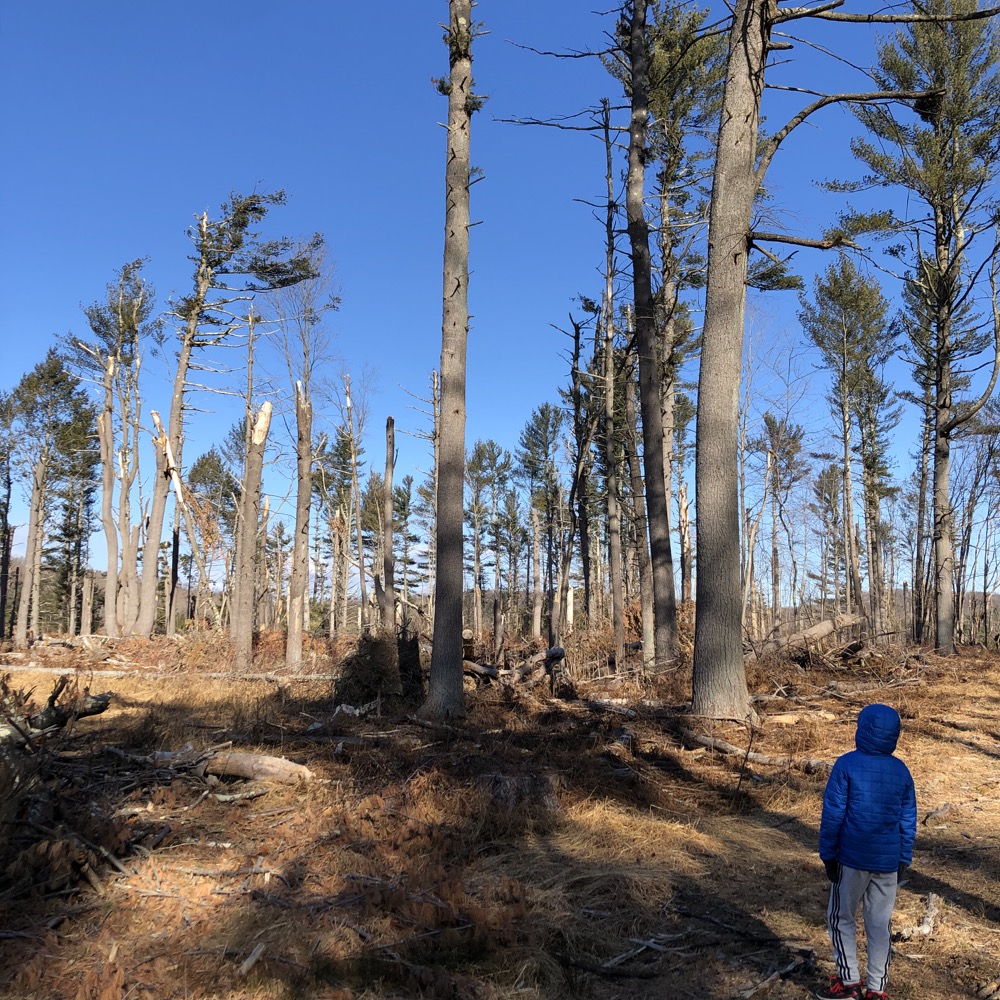 Aug. 29, 2020: Officials said the tornado first touched down in a forested area southeast of Judd Hill Road in Bethany, then moved through the forest along Amity Road, Munson Road and the Litchfield Turnpike, “creating a path of damage about 75 yards wide” with wind speeds that appeared to range between 80 and 90 mph.

The path of damage widened to about 300 yards as the tornado moved over Lake Bethany, officials said, causing “significant roof damage to serveral homes” and “snapped hardwood trees.” The wind speed was seemingly about 100 mph during this period. 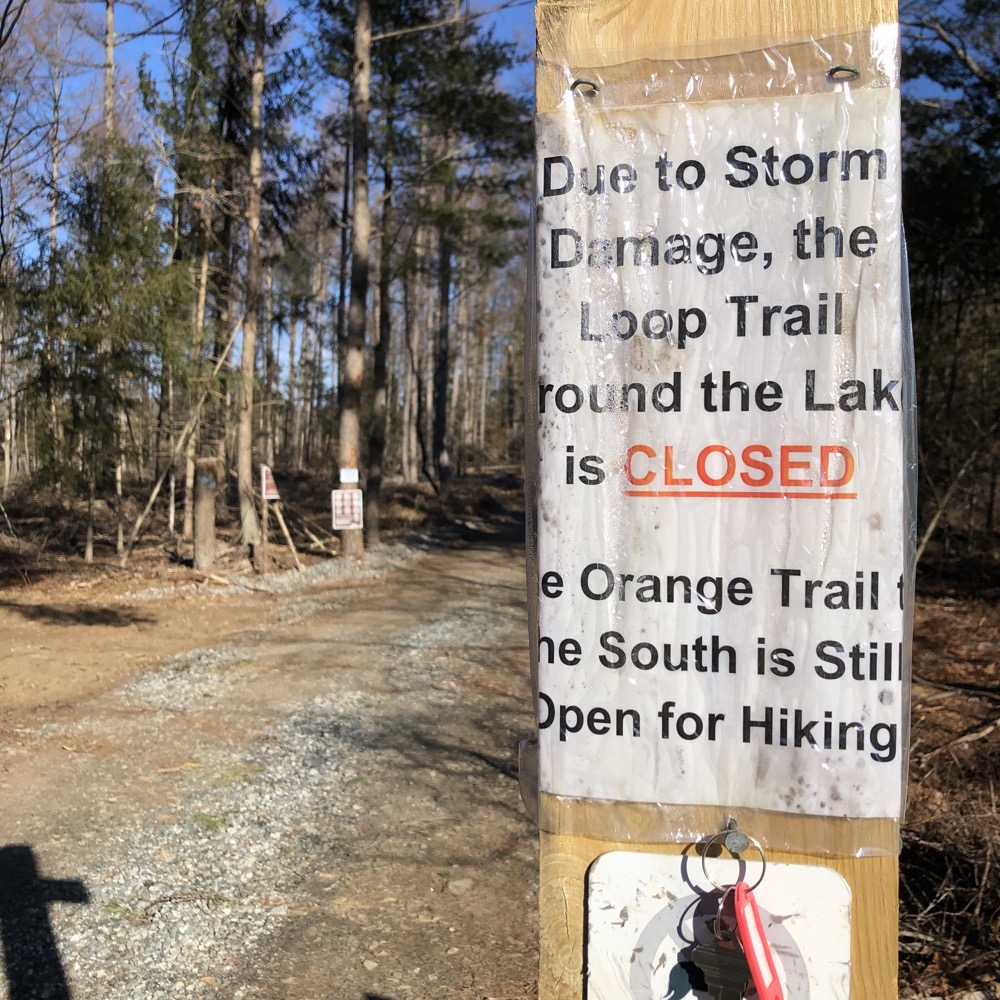 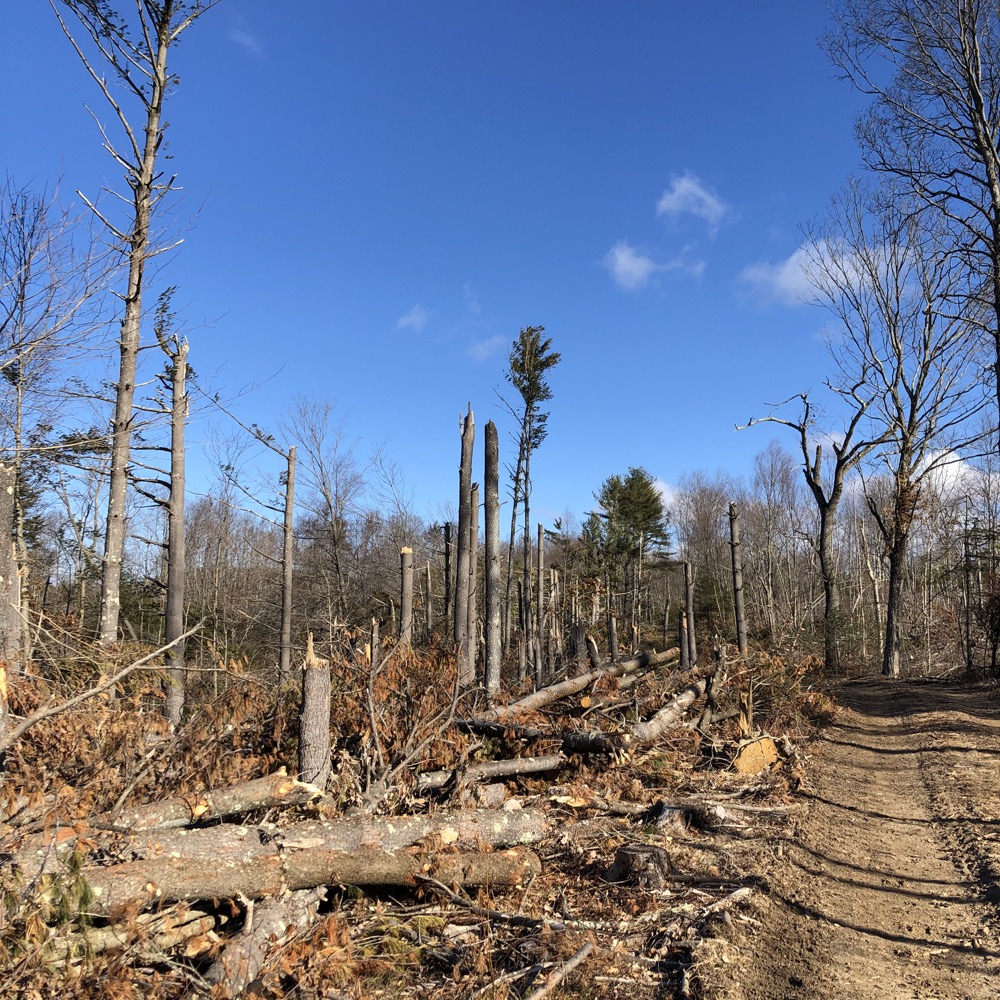 That’s pretty much all you need to know. Well, that and the fact that there’s a logging operation that predates the tornado. So, as you can see from my pictures, most of the eastern loop around Lake Bethany has been “closed” since… I’ll guess late 2019 or so.

And it’s hard to know which felled trees are from logging and which are from the 2020 tornado. Or if the logging concern was over the moon that they got a bunch of “free trees” from mother nature? Is that how it works? I have no idea. 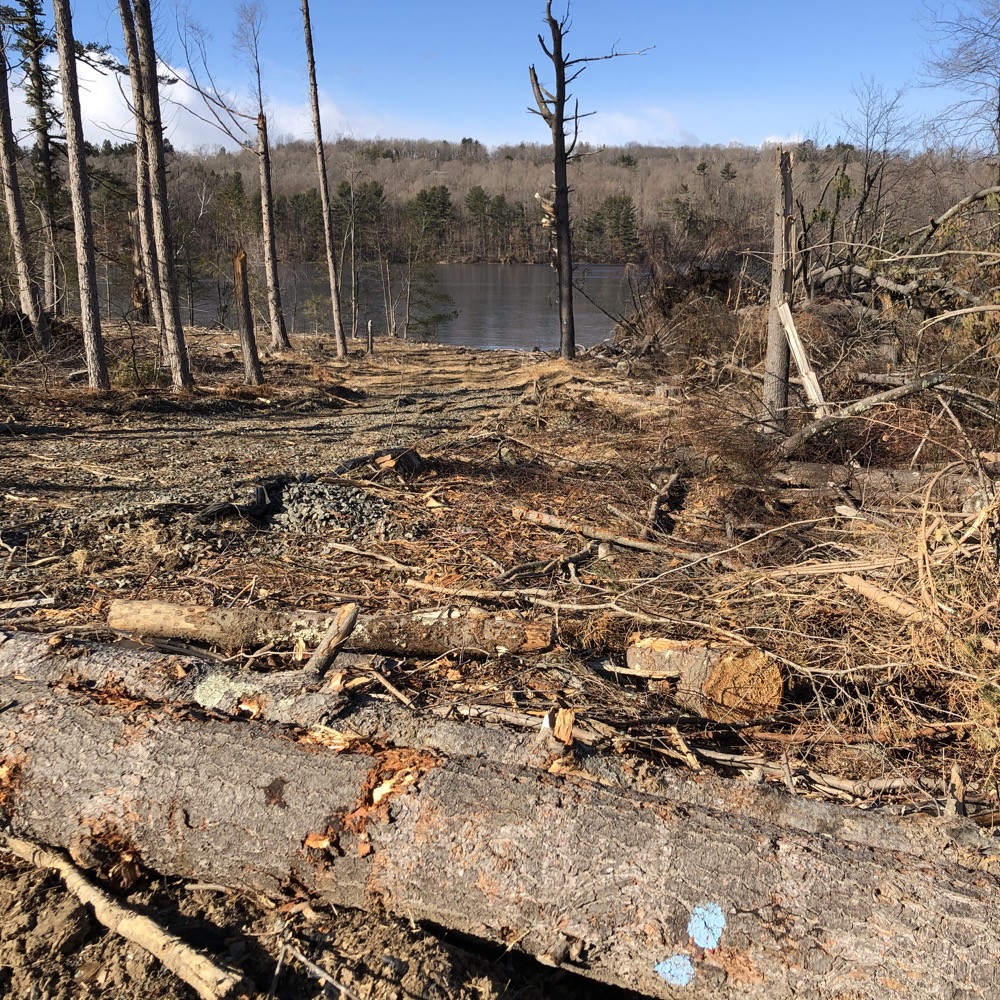 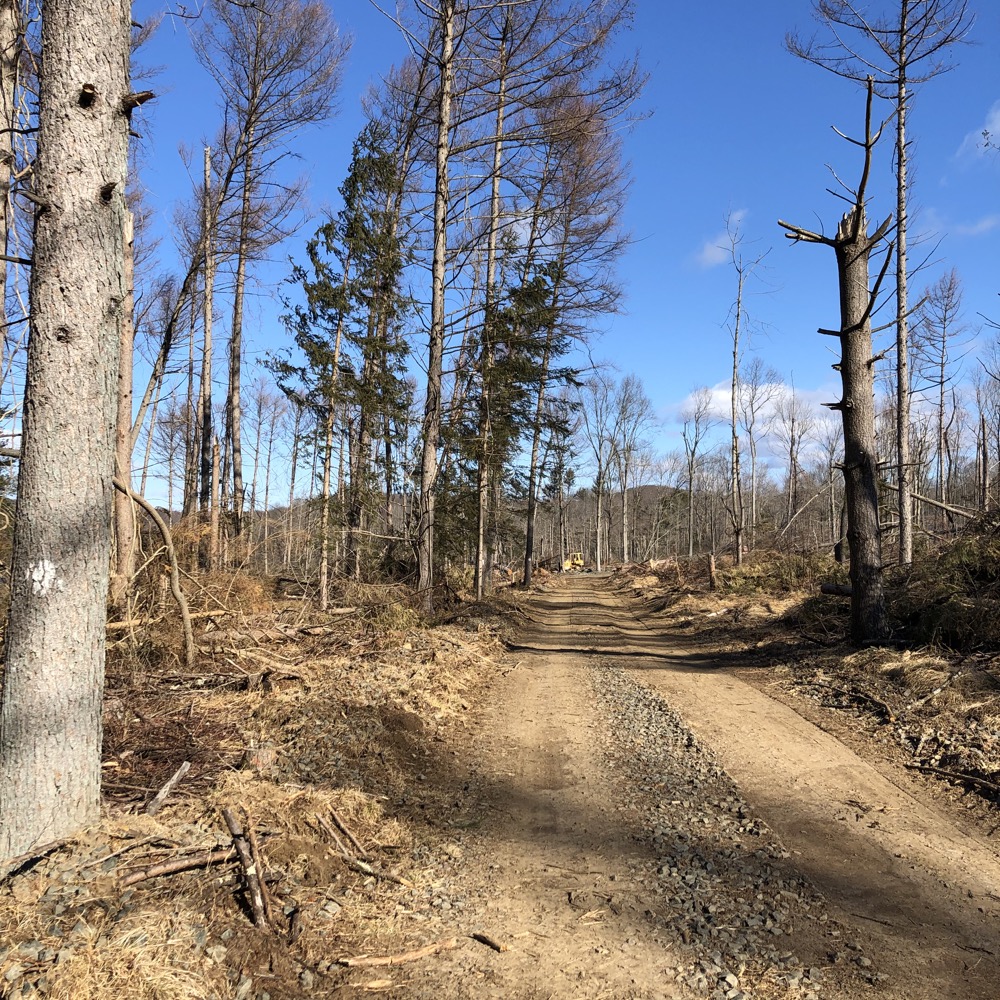 What I do know is that the eastern half of the Lake Bethany loop was posted as closed in early 2021. I know that the mapped blue trail that ventures lakeside has been destroyed. I know it was freezing cold. And I learned that sometimes when they say a trail is closed, they mean it.

And yet… Calvin and I managed to hike the whole thing more or less. 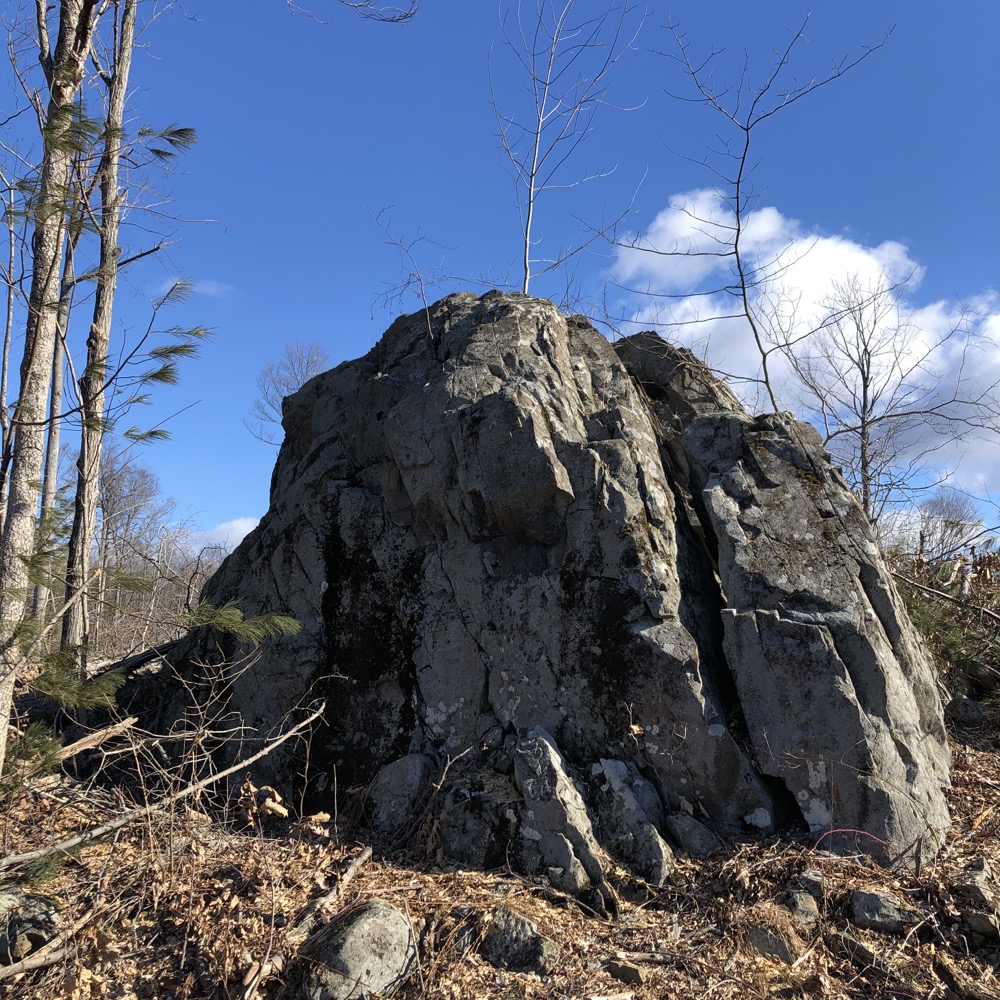 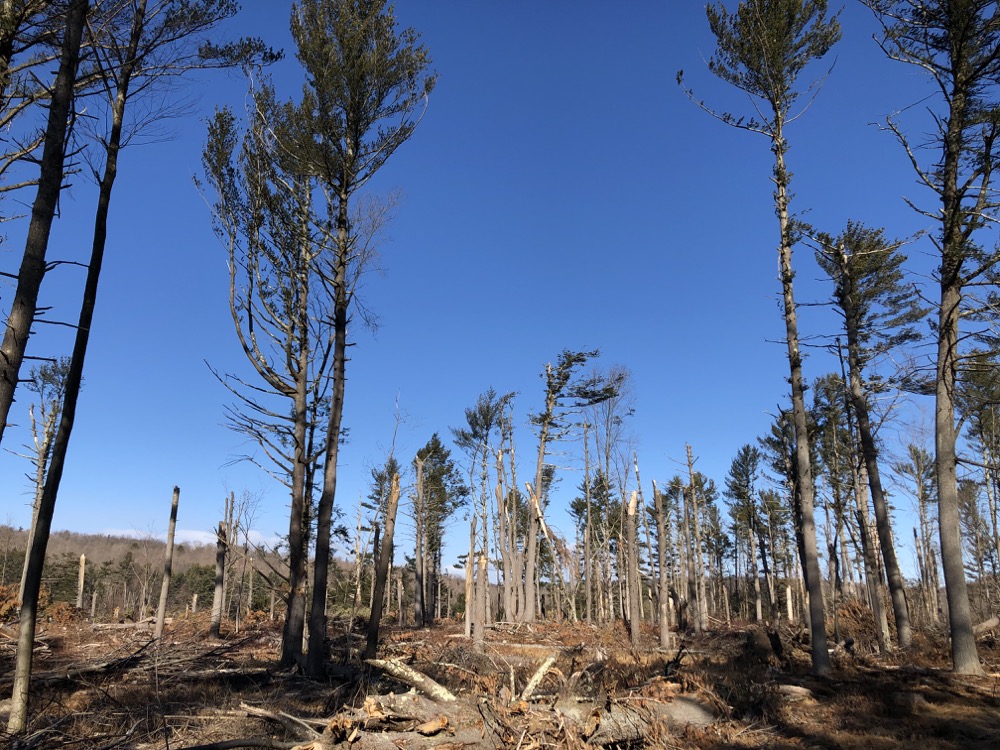 We began on the east side, through the downed trees. According to the RWA, “the trail here crosses an old field that once grew hay for the water company’s draft horses. The field is now planted with white pine, larch and Norway spruce.”

Hm. I’m sure that was a nice area a few years ago. Now? Not so much. 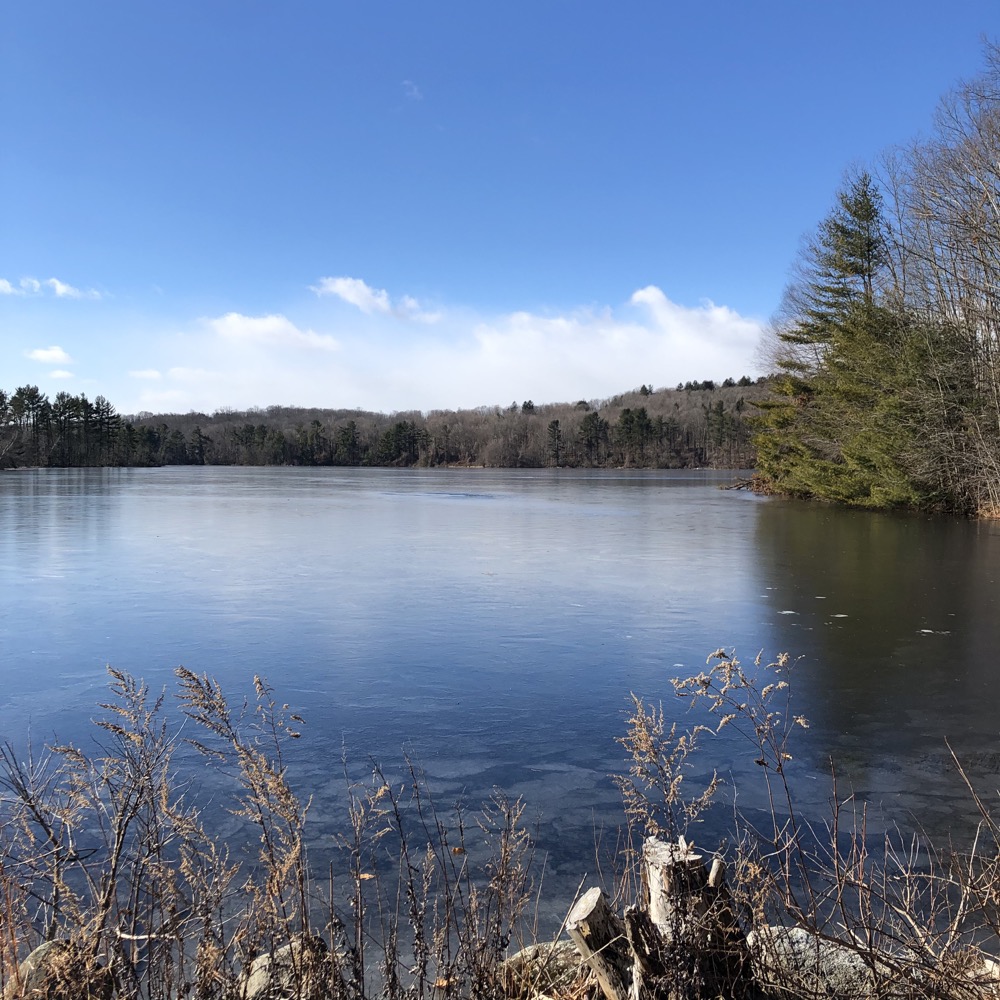 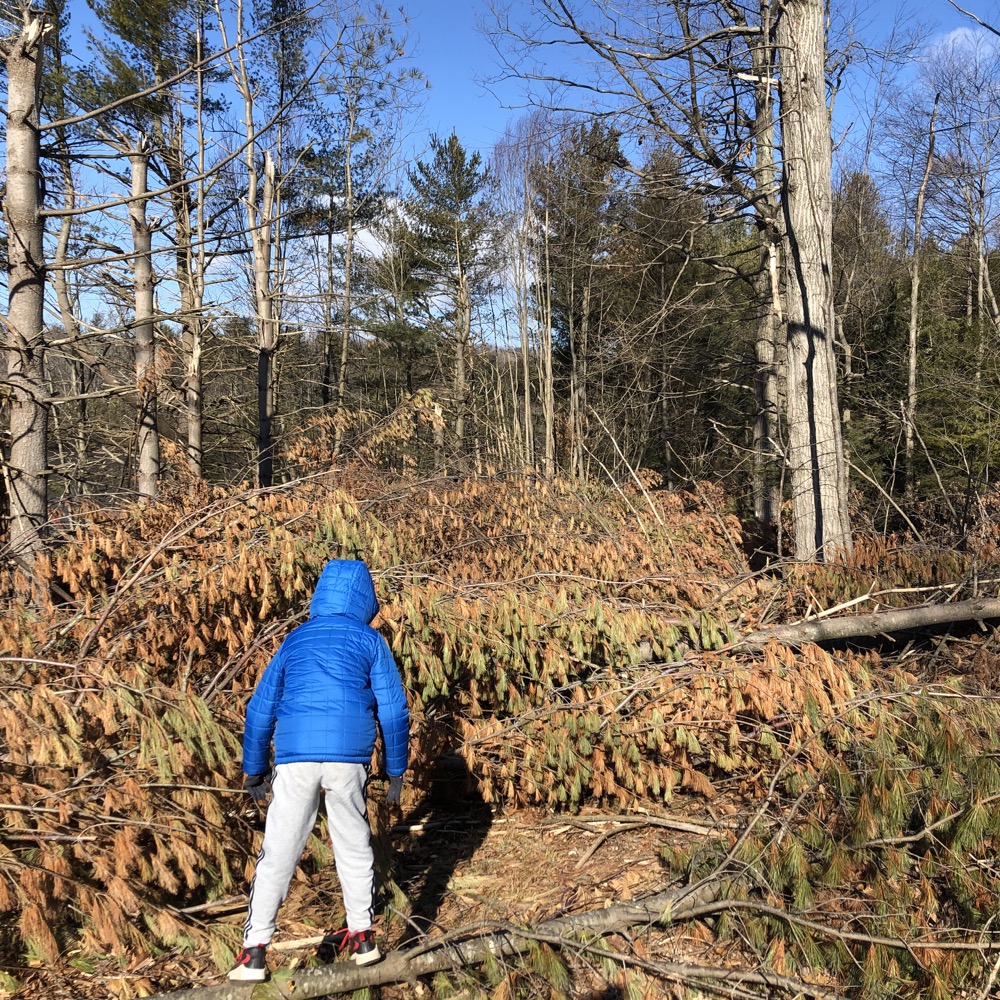 The “trail” was a logging road and it was actually really interesting to hike through for some strange post-Apocalypse reason. Calvin seemed to enjoy the change of pace. We crossed an inlet after a while and happened upon a dead mouse. Just dead in the middle of the trail. Calvin did not enjoy that change of pace.

He mourned the dead mouse for a while and we trudged onward towards the northern stretch along Hoadley Road. 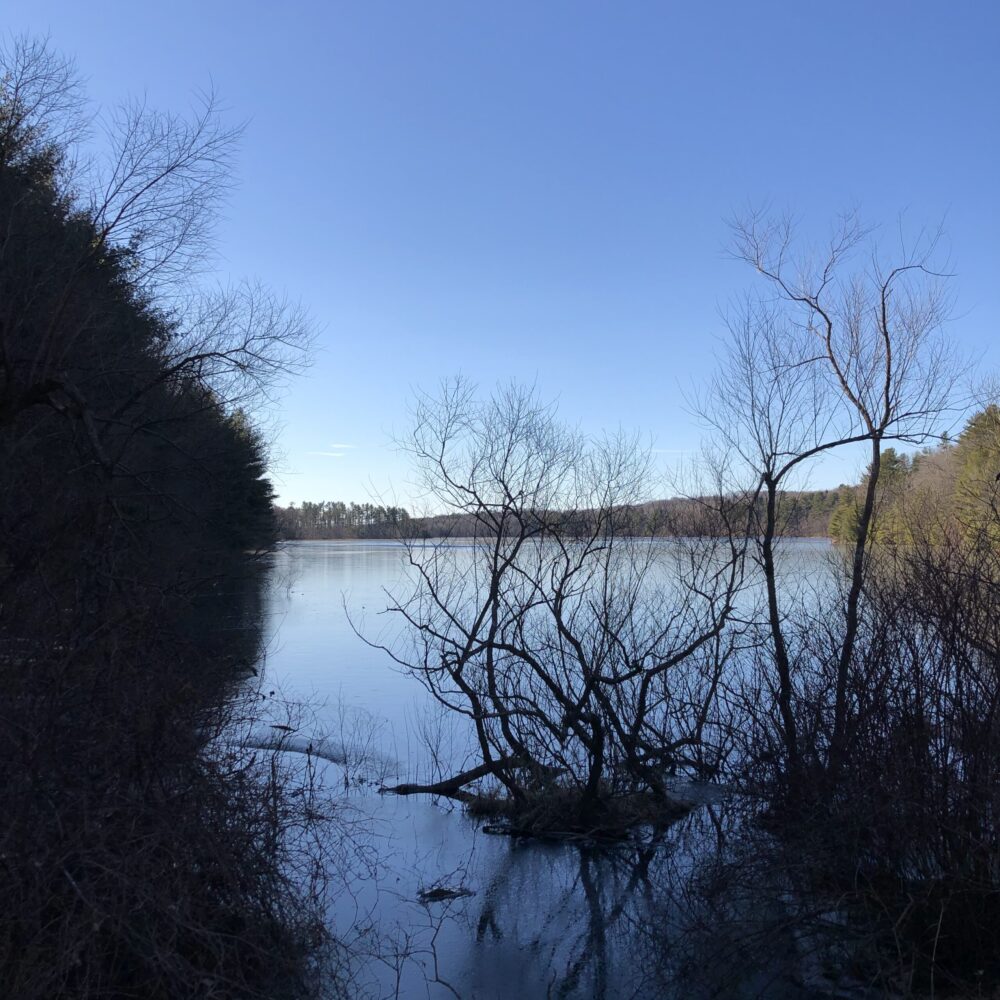 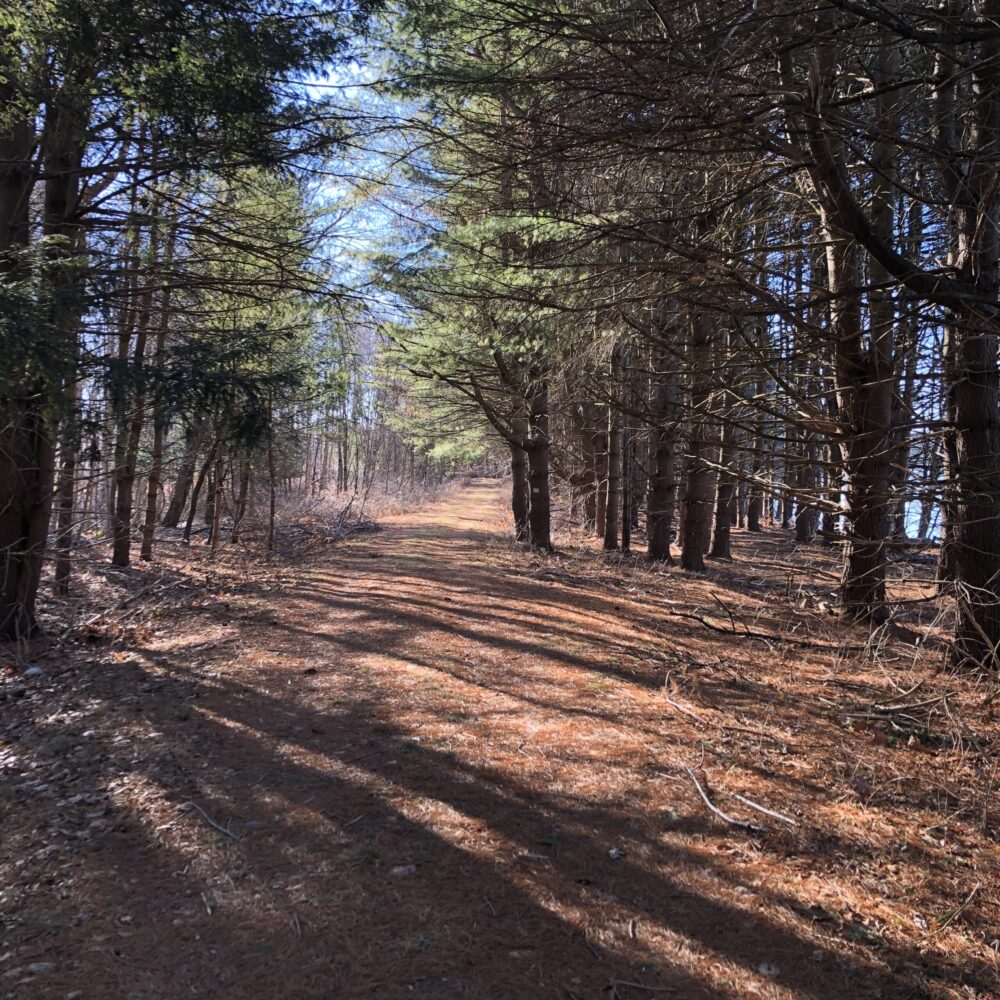 The problem was that the loggers made a mess and left a couple hundred trees lying across the path. It was at that point that I realized what they meant be the trail being closed. Yes, it’s closed for safety, as no one should ever hike through an active logging operation, but on this day in late January 2021 anyway, it was literally closed off to full circumnavigation.

(We could have picked our way over the the trees, but they stretched on as far as I could see, and having no clue if it would be a ten-minute operation or an hour, we turned tail and went back… past the dang dead mouse again.) 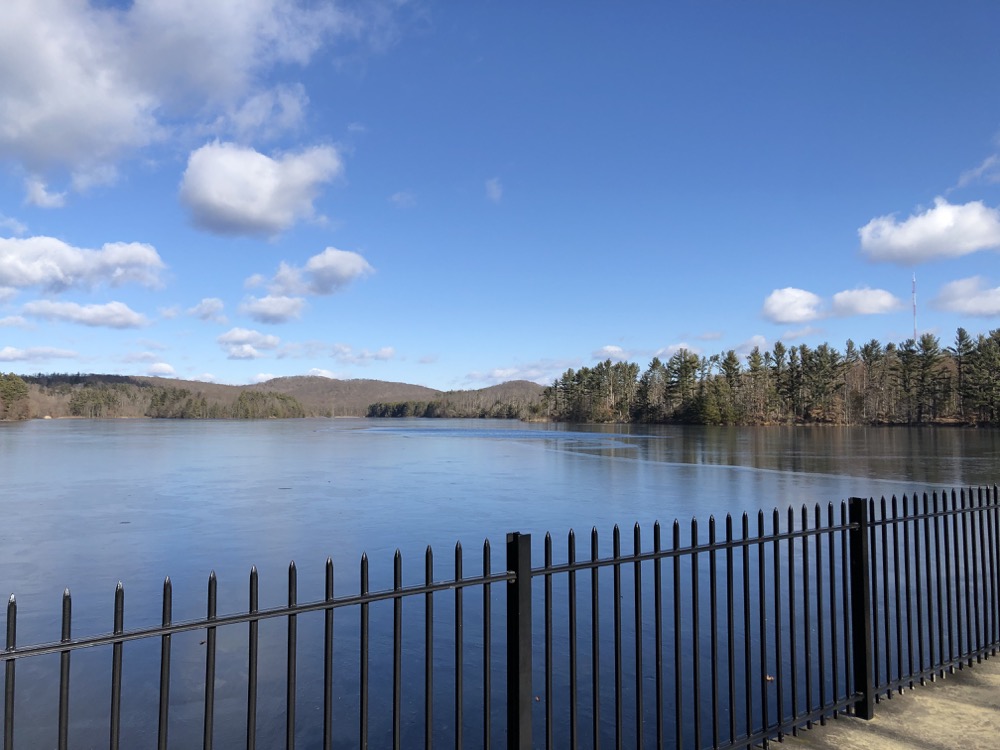 The trail at the southern end of the property crosses the dam along Hatfield Hill Road and then heads north right up alongside Lake Bethany. It has quite a different feel than the east side… with trees and all. The RWA says that, “the west side of the Lake Trail is a bird watcher’s delight with habitat that includes maturing and medium-sized maple and birch, alternating with tall pines and clearings dominated by blackberries, goldenrod, and meadowsweet.”

That is a really, really poetic way of saying it’s a wide forest road through some brush and edge habitat before entering a typical New England forest. With a lake nearby. 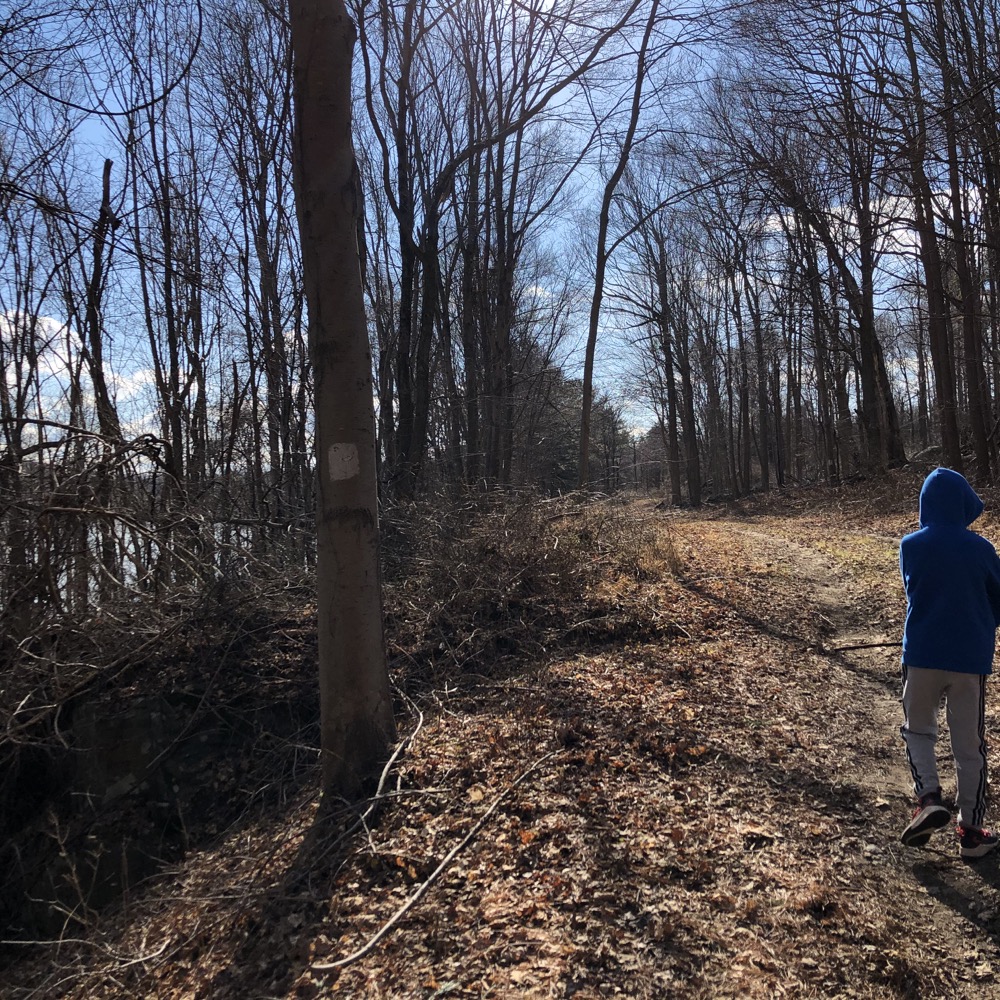 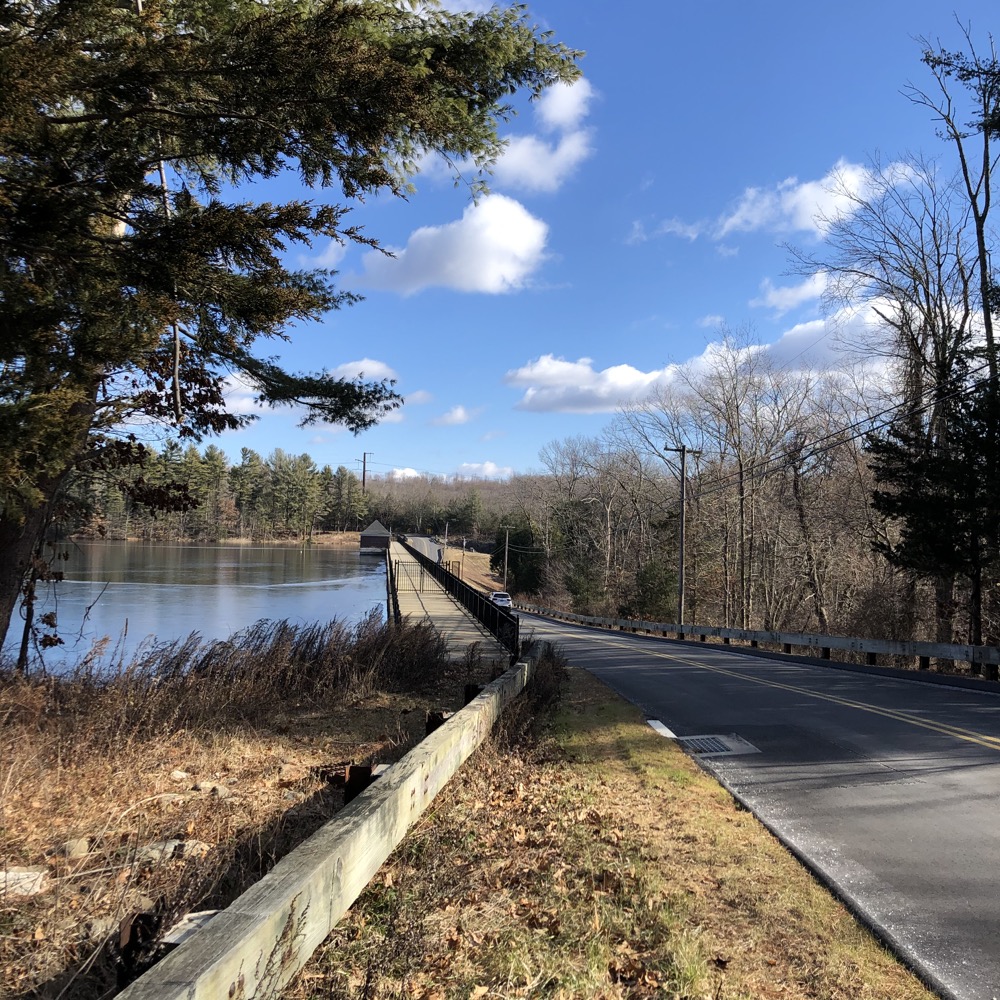 Cal and I made quick work of the west side of the lake, seeing as there were no stacks of felled trees in our way. All the way up to the road again. I convinced him it would be great to walk all the way around to where we had to turn around earlier.

Actually, there was no convincing him, because that would be dumb. So he rested while I did it, because, well, because I’m dumb. Back on the east side, it’s really nice. Tall pines, some pretty glimpses of the lake. Turns out the stack of trees wasn’t a quarter-mile long and we could have made it through. Oh well. Back around and down and across the dam to the…

Not the car! To the Tamarack Trail! 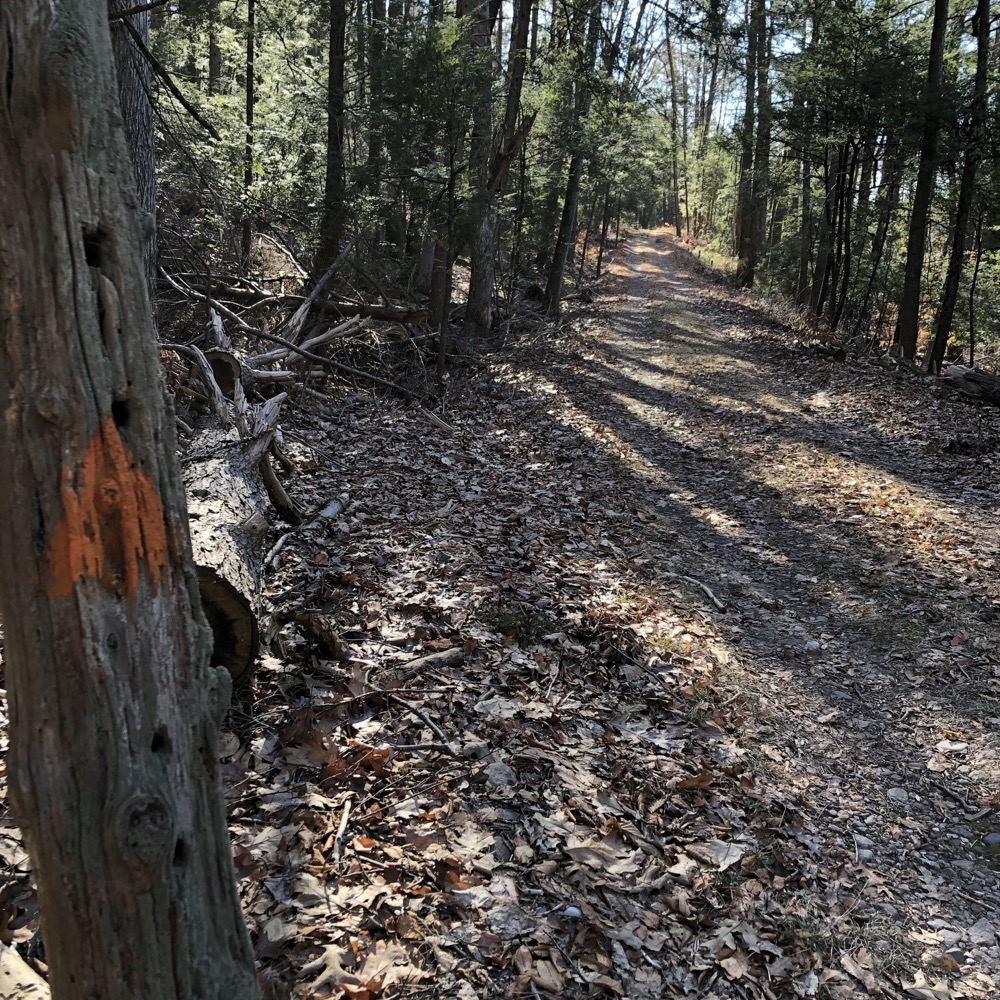 The Tamarack tree, also called the American Larch, is one of the only two native conifers that drop all their needles every fall. (The trees along the Tamarack Trail are actually European Larch, a close relative, which I find kind of funny.) This orange-blazed trail, set away from Lake Bethany off of Hatfield Hill Road, follows the West River and a little ravine.

The locked RWA gate to park here is the most difficult one to sort out, by the way. The chain is just long enough, which is to say, it’s a huge pain the butt to properly lock and unlock it. 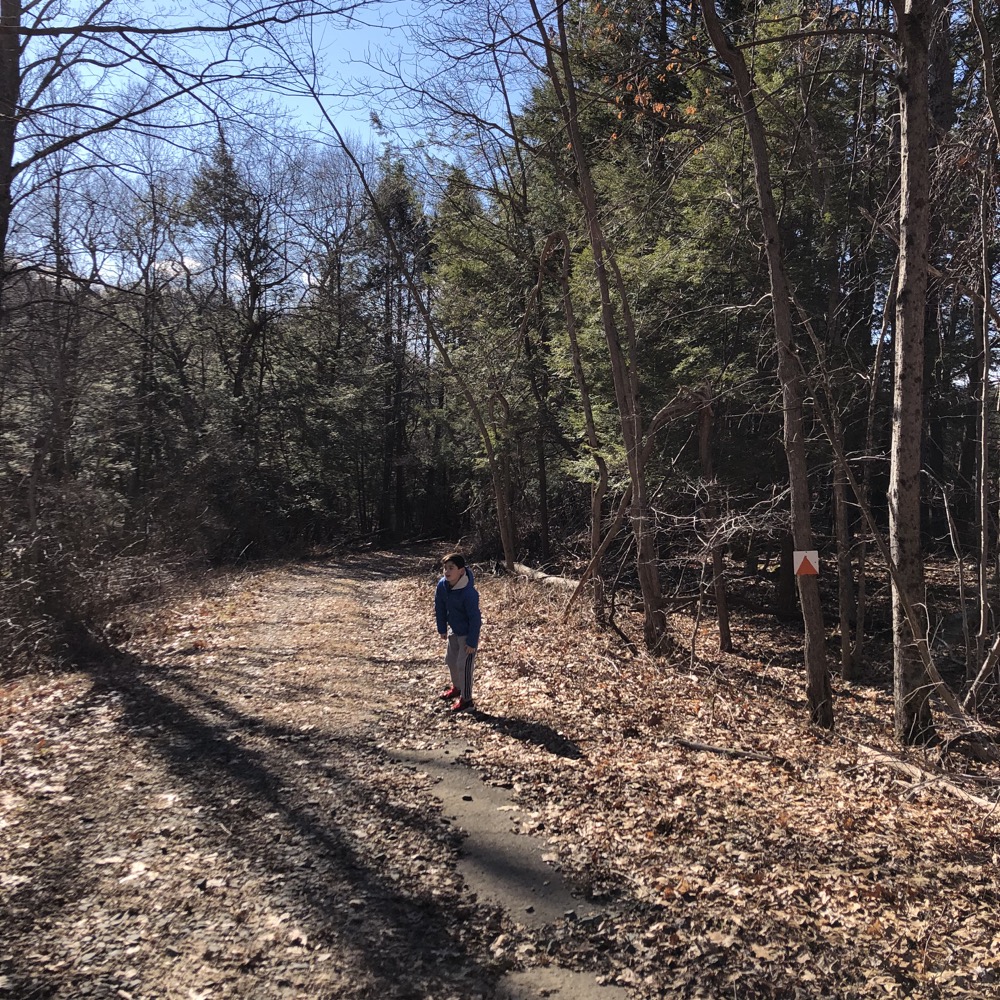 Anyway, this trail is an out and back “down and up” affair. The RWA calls this the “most Vermont” stretch of trail in the RWA system. I guess? Perhaps we were just tired and wanting to see the true showstopper of Bethany (The world’s largest pile of horseshoes across town), but I didn’t get a particularly Vermont feeling here.

It’s a bummer that the walk on the east side of the lake will be denuded of trees for many, many years to come. In a way, it offers a different sort of scenery, so if that kind of change of pace is your thing, go for it. I’m sure the RWA has plans to revitalize and replant and all that, but most trees worth planting don’t exactly grow overnight. Oh, and don’t hike trails that tell you not to hike them. That’s bad.

I’m sure someone will report in the comments below in the 2030’s to let us know. Thank you in advance. 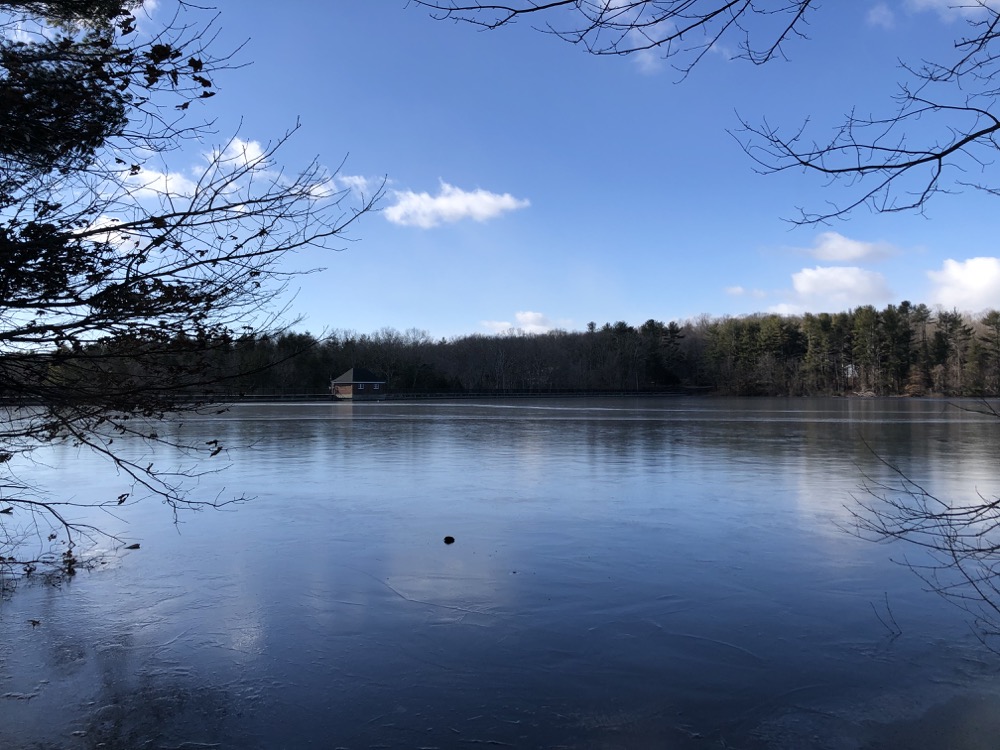