Lake Chamberlain itself is entirely in Bethany, but a couple of the trails within this RWA property extend down into Woodbridge and connect to other trails and roads. Some of those trails are okay for Regular Joes to access and hike… and some require the RWA permit. It can be confusing, and I imagine many people freely walk around this area never having heard of the RWA permitting process. 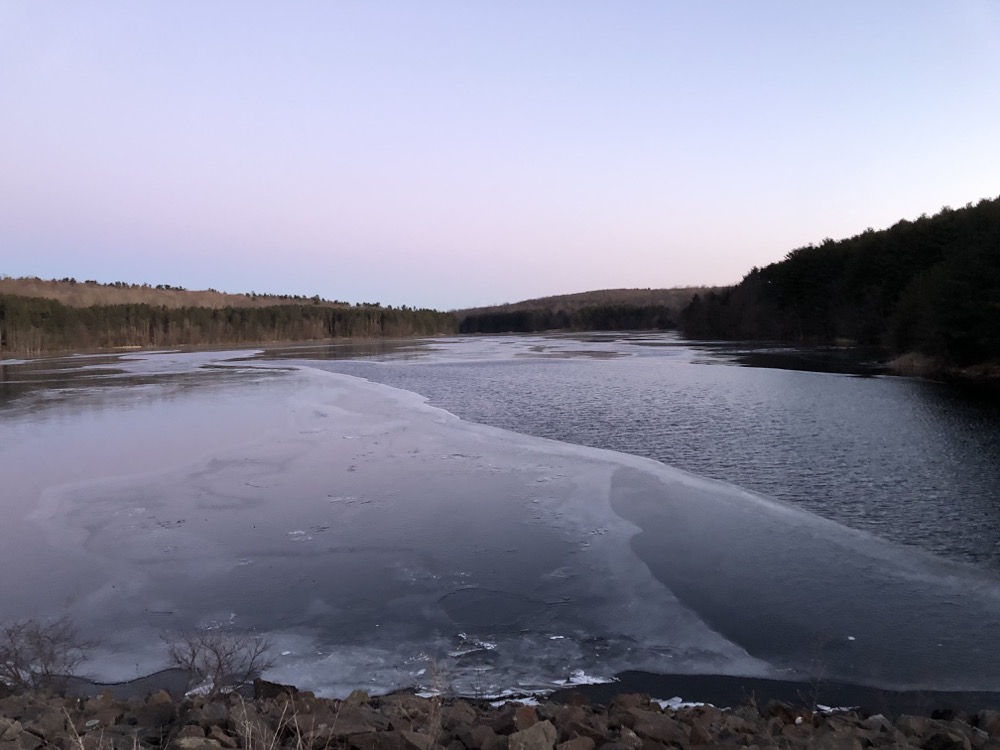 But I’m simply stating the rules. Even if I hiked this property at dawn, with the temperature in the single digits in January. No one was going to be checking my RWA permit that’s for sure.

I parked off of Sperry Road at the southeastern corner of the lake and began my clockwise loop around it. I’m generally fine hiking in cold weather, but I’ll admit that the first long stretch across the dam here, exposed to the wind, was rather unpleasant. As I get older, I seem to get colder. 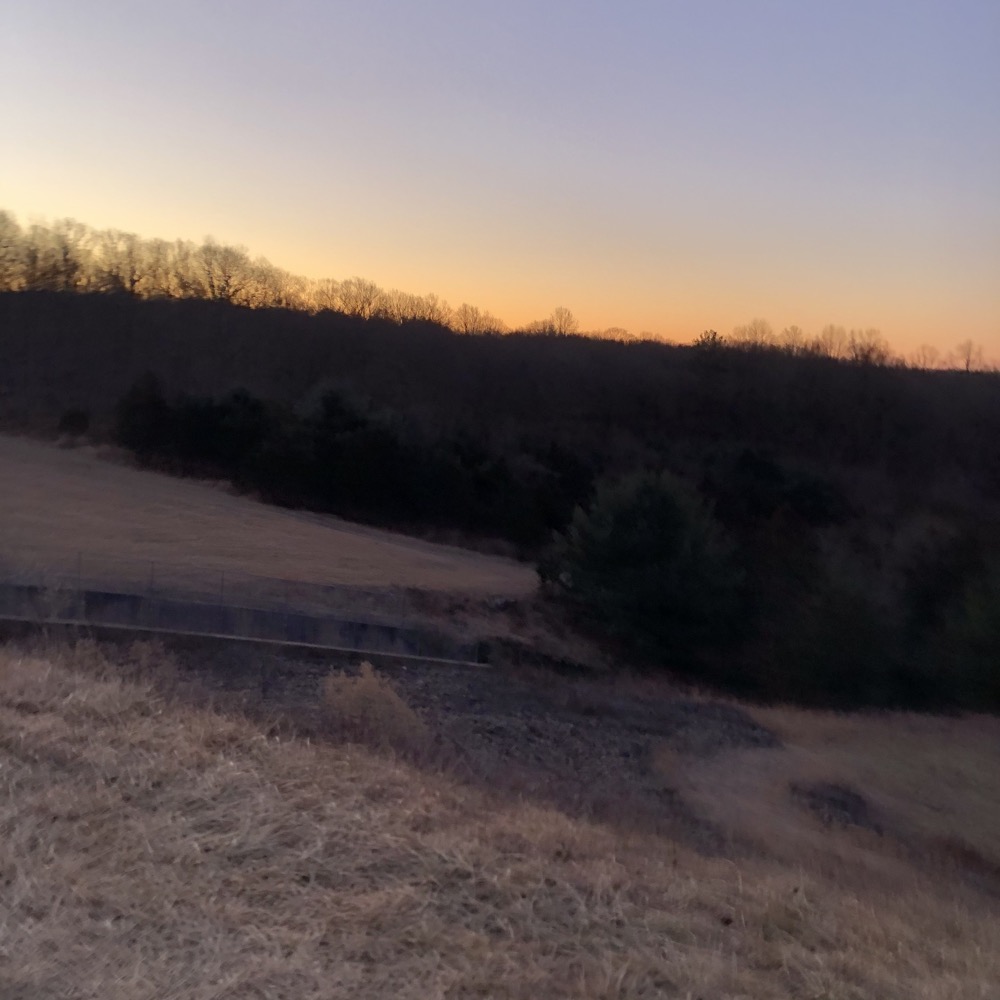 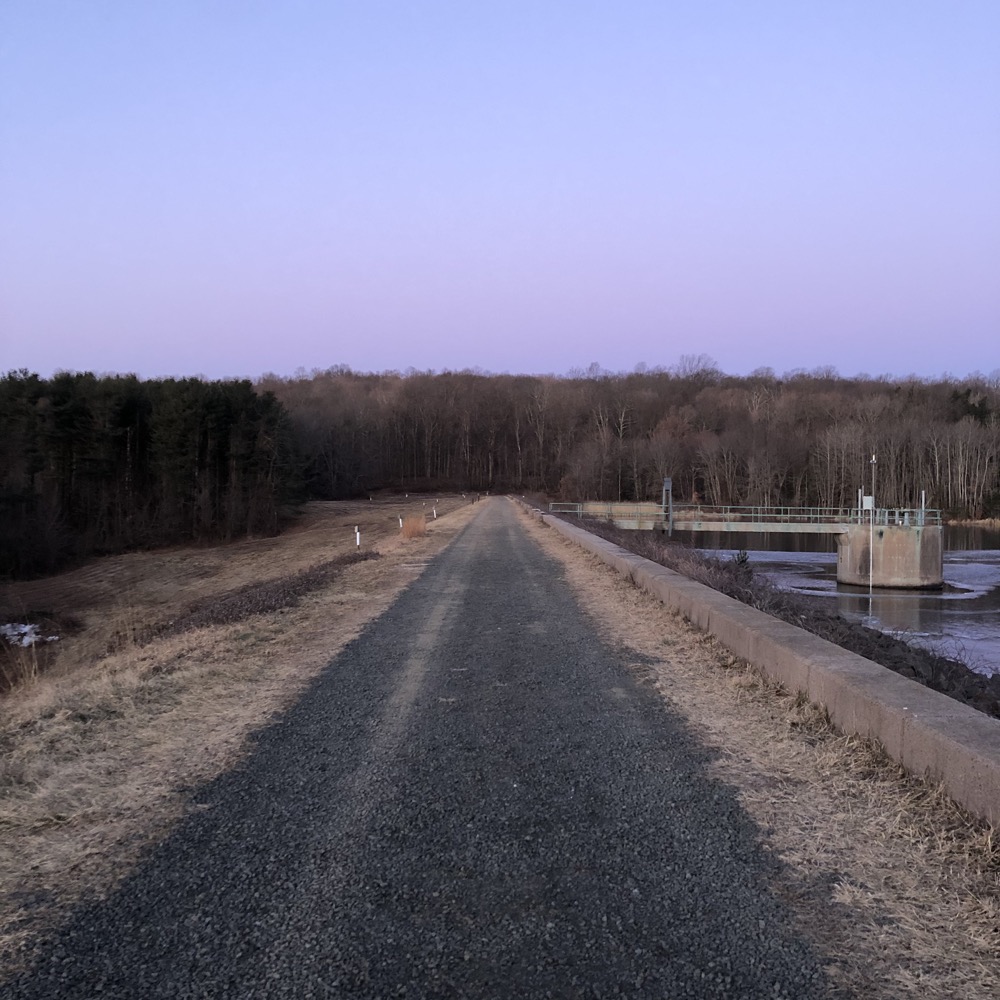 But at least I continue to operate normally. My iPhone couldn’t handle it. Several times the camera wouldn’t work, or the battery showed zero or it just died. I’d stick it down my pants for a few minute and voila, it would come back to life to take more of the pictures I’m so (in)famous for here on CTMQ.

(If curious, the iPhone battery can lose enough power in just a few minutes in very cold temperatures and will shut down the device. The device is not actually out of battery life, but rather, the lithium-ion battery simply cannot function at extremely cold temperatures. I can confirm this is true.) 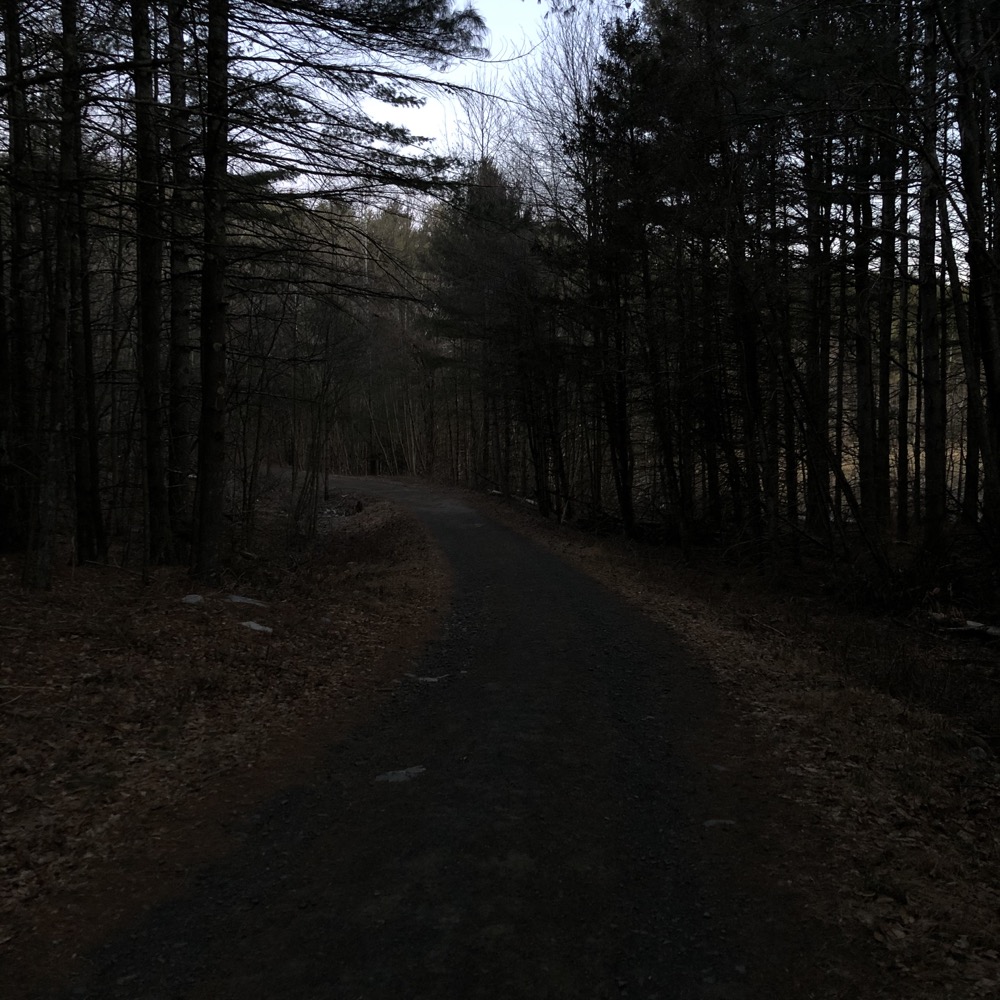 Pine forests can be dark before the sun is up

There are several named side trails off the main road around the lake; many RWA “trails” are woods and reservoir roads. But a bunch of them are merely connectors to parking areas on nearby roads and not remotely interesting. Let’s stick to the main trail for the most part.

Did I mention it was quite cold? It was quite cold. But it was also a beautiful morning and I was able to enjoy another winter sunrise over a reservoir. I think this is the 84th time I’ve experienced this in Connecticut. (Rough estimate.) 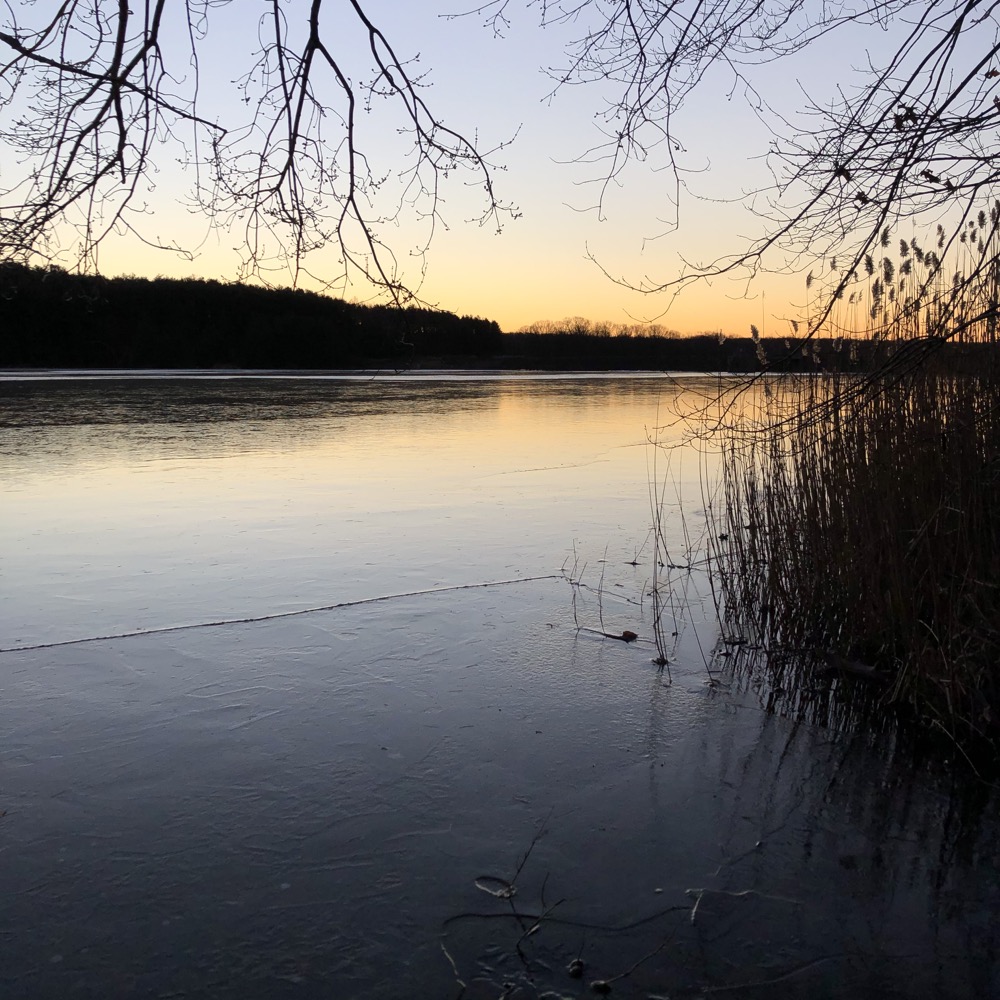 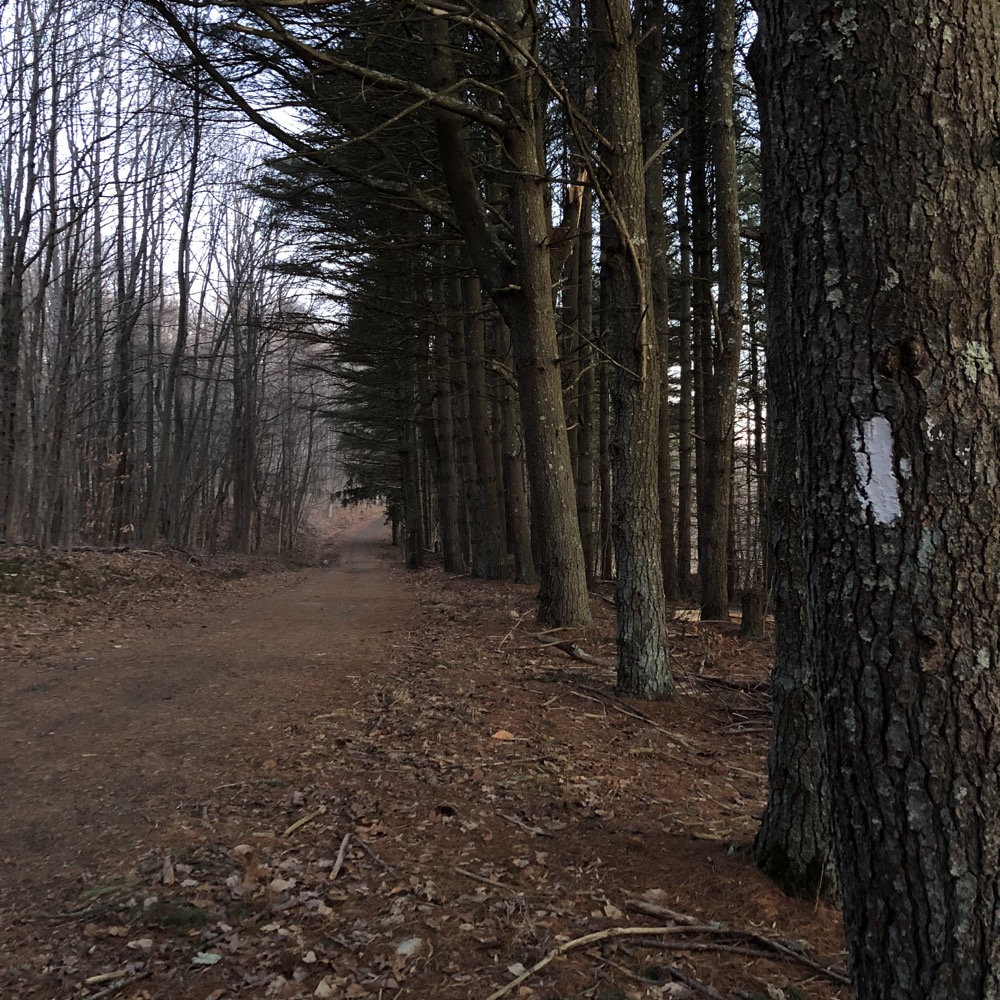 Despite that, I still hustled to the western side of the reservoir in an effort to be able to capture the 84th sunrise over a reservoir picture for this website. Or maybe that’s revisionist and I was hustling simply to try to get the blood flowing into my toes again. I forget.

I had to go off trail through a pine stand to get down to the water’s edge, but it was worth it. You know something is pretty if I can make it look somewhat so in my pictures. I really enjoyed this area at Chamberlain. I knew no one was within a mile from me in any direction and I had this beautiful moment to myself. If that makes me selfish, then so be it. 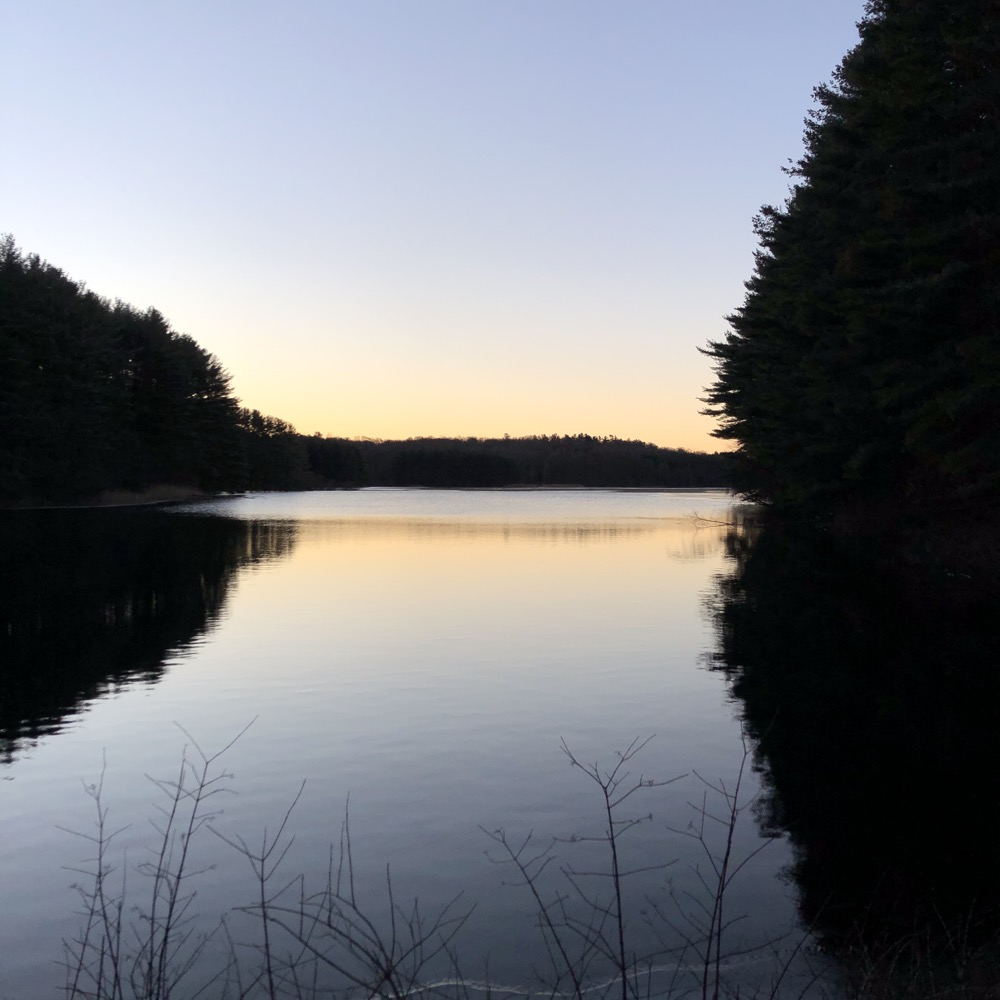 Originally constructed in 1890, Lake Chamberlain was enlarged in 1958 to over five times its original size. The Sargent River is responsible for the reservoir on its way east to the West River. The road “trail” around the reservoir is called the Eric L. Stone Trail. As I write about a lot of trails and properties named in honor of people neither you nor I have heard of, I like to try to find out about them. Mr. Stone was yet another impressive person who certainly deserves the honor of having a beautiful trail named after him.

First of all, he was born in Woodbridge and lived (and died) in Bethany – and this property is in both towns too. So I like that surely unintentional coincidence.

Eric Leon Stone Sr… was a highly skilled carpenter, cabinetmaker and millwright who achieved national recognition in the Architectural Digest for his construction of an award winning private residence in Stony Creek. For over four decades he maintained an active involvement in the Boy Scouts of America. He served in such varied scouting positions as Scoutmaster of Troop 7 in New Haven, leader of Council International Camporee units and 1965 National Jamboree. In recognition of his many years of service and leadership he was awarded the prestigious Silver Beaver Award. After moving to Bethany in 1963, Eric began a “new” volunteer career as a state leader among municipal conservation and inland wetlands commissioners serving on both the Bethany Conservation Commission and Bethany Inland Wetlands Commission for over thirty years, the majority as chairman. He was instrumental in the formation of the Connecticut Association of Inland Wetlands and Conservation Commissions (CACIWC) and served as its first Secretary. He served on the West Rock Ridge State Park Advisory Committee from 1977 until 2005. He was named Bethany Citizen of the year in 1986, received the Bethany Conservation Award in 1978, a Public Service Award from the Secretary of the State in 2001 and a lifetime achievement award by CACIWC for 32 years of service to community and state in 2002. He represented the Town of Bethany on the South Central Connecticut Regional Water Authority’s Regional Policy Board (RPB) from its inception until his election to the five member Authority. While on the RPB he served as Land Use Committee Chair for 4 years and Chairman of the Board for 6 years. In recognition of his many years of service to the SCCRWA an interpretive trail around Lake Chamberlain in Bethany was named in his honor. He shared his skills as a craftsman as a key worker and artisan in the restoration of the one room school house now located by the Bethany Community School. Eric was a devoted husband, father and grandfather. An avid gardener and conservationist he was a staunch believer that the land must be protected – since it will outlive us all. 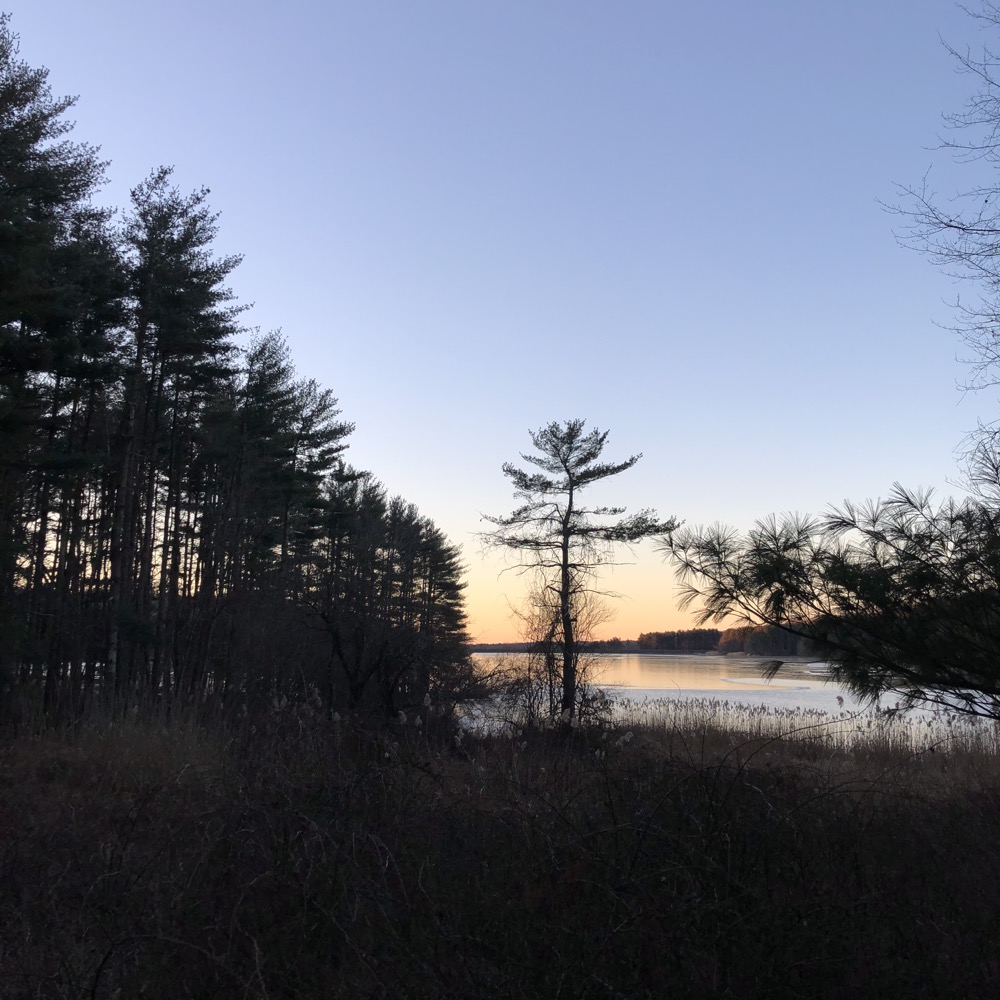 Wow. The obituary mentions his trail! And that he helped restore a one-room schoolhouse that is on my massive list of Connecticut museums! I’m so happy I very much enjoyed his trail. A trail that yes, has interpretive signs along the way.

Some of the signs are incredibly wordy for a woodland trail education sign. Or maybe they just felt that way because I wasn’t about to spend four freezing minutes reading about “New England stone walls” or “forest succession” for the 84th time. But it’s great that they exist for those who are new to learning about such things. 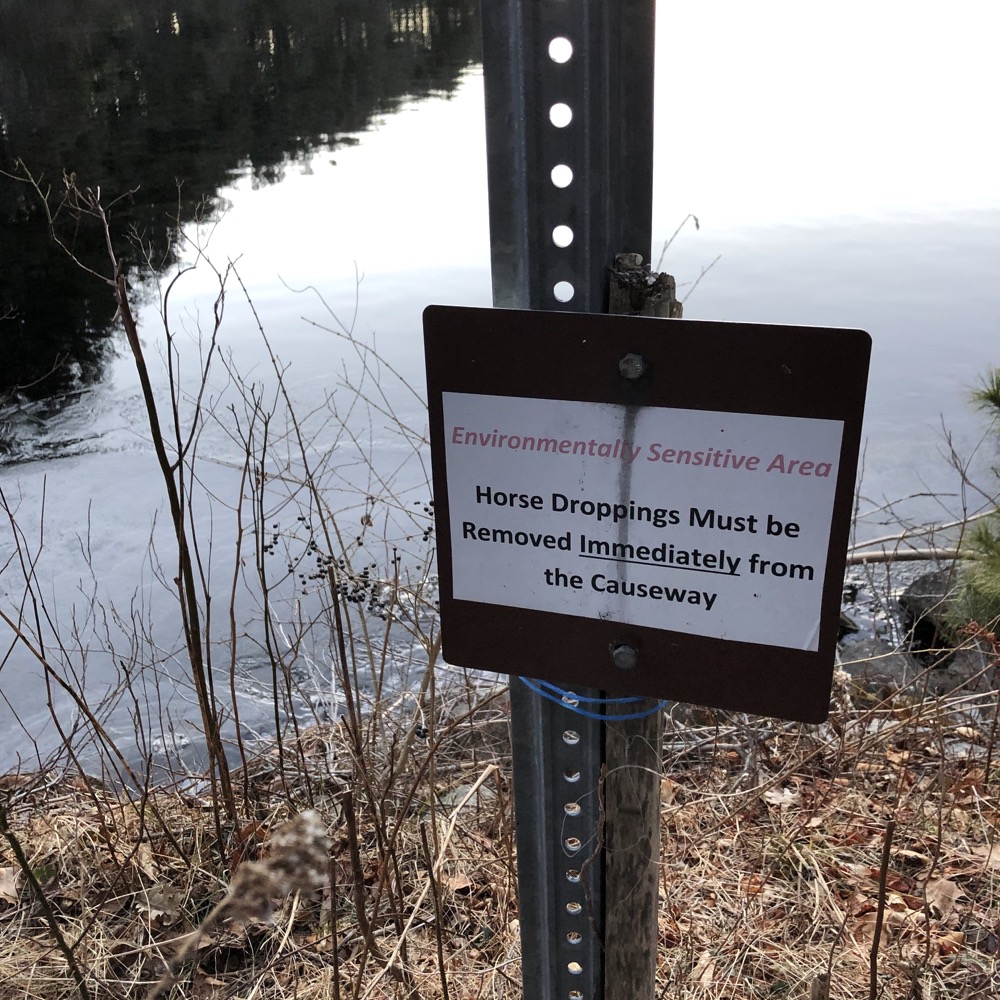 I thought about it a lot, actually. Do horse riders know when their horse defecates? Are they really going to hop off their steed and… what? Like, what do they do with the mountain of horse poop at that moment? I know I’ve seen poop bags hung behind the Central Park handsome cab horses, but that’s not happening in Bethany, Connecticut’s woods. I am fascinated by this, sorry.

After crossing the little bridge at the north end of the reservoir, the trail becomes a bit more of a trail for a bit before joining another woods road. It was here that my phone finally had enough of the cold and died before I revived it. (This cycle repeated a few more times as I made my way down the eastern side of Lake Chamberlain. 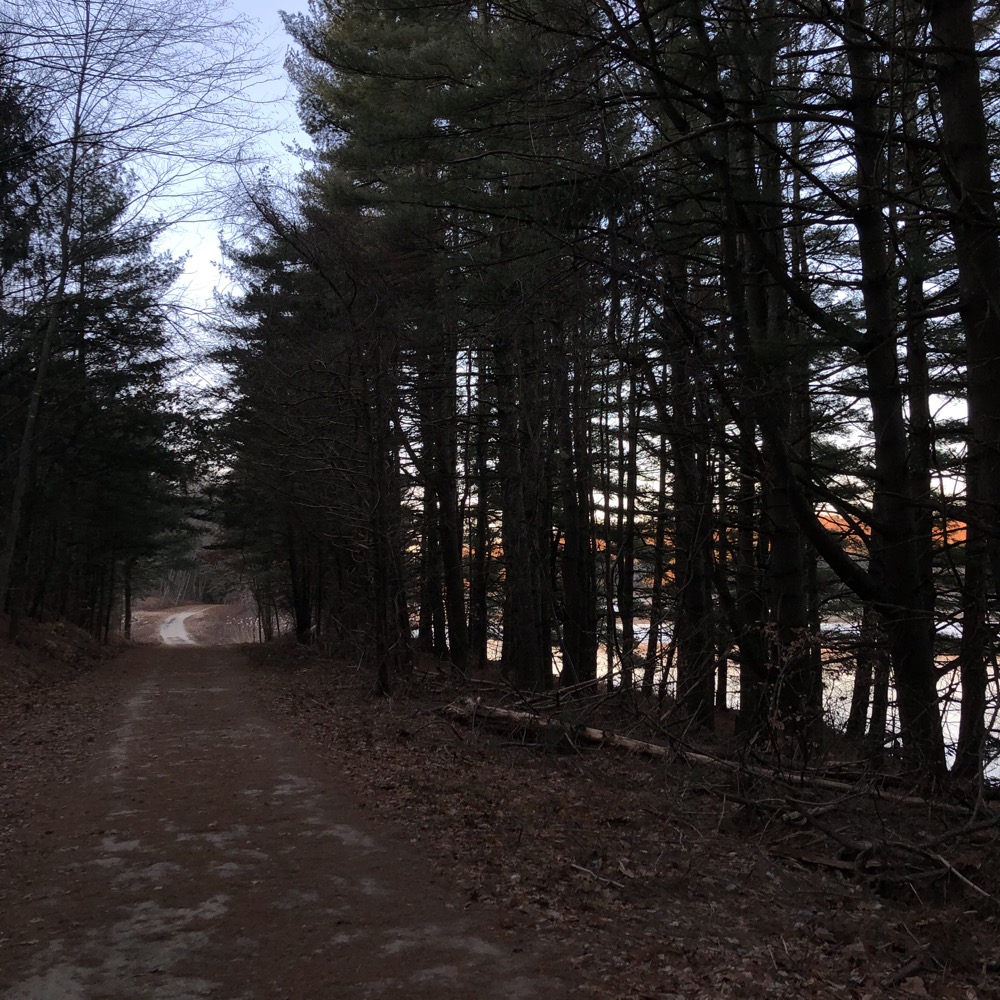 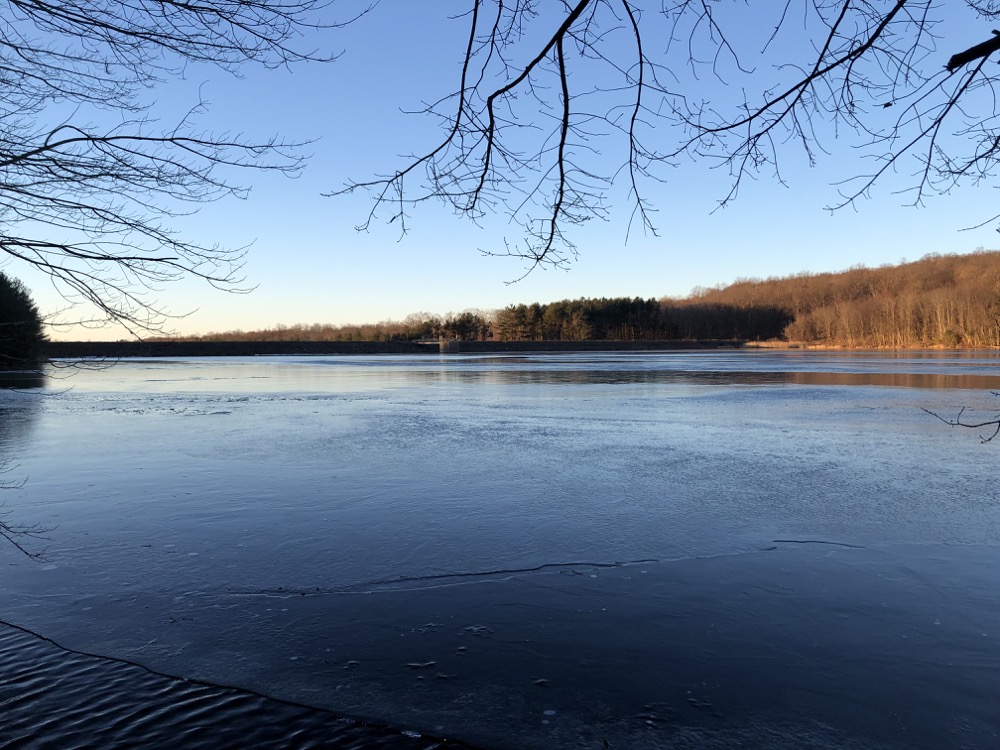 I had a few options to complete my loop. Stick to the honorable Eric L. Stone Trail? Or take one of the side trails. I opted for the red-blazed Cabin Trail that took me much closer to the water’s edge. This is a beautiful stretch of trail; near the water and through a stand of massive pines. Since this is a permit-only stretch of trail and since this is in Bethany, I’m willing to be very few people ever experience this place. Which I guess makes it cooler somehow.

I was back to where I began in the wide open space near the dam and my car. A few different trails continue south into Woodbridge and I took the Green-blazed Sargent River Trail. This took me through low-land swamps with little bridges and things to keep my feet dry. The sun had finally risen a bit and the air began to warm into the mid-teens. 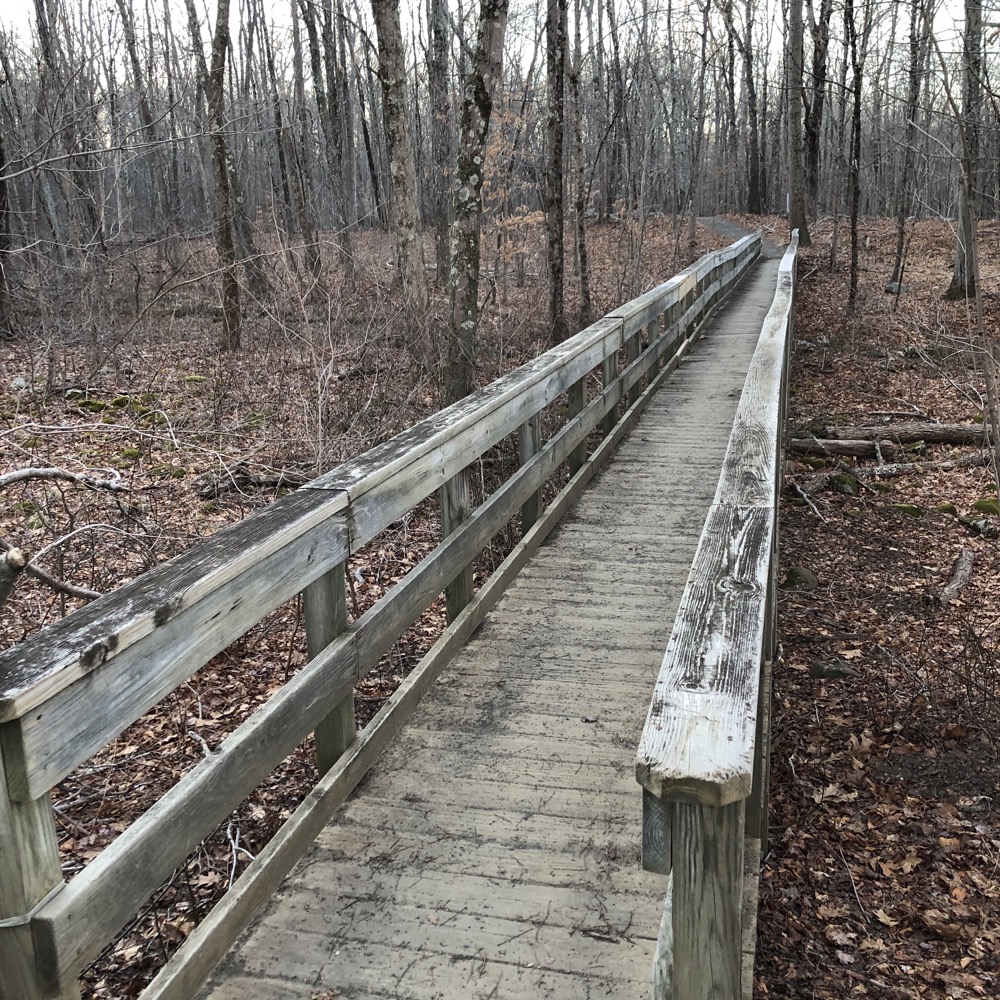 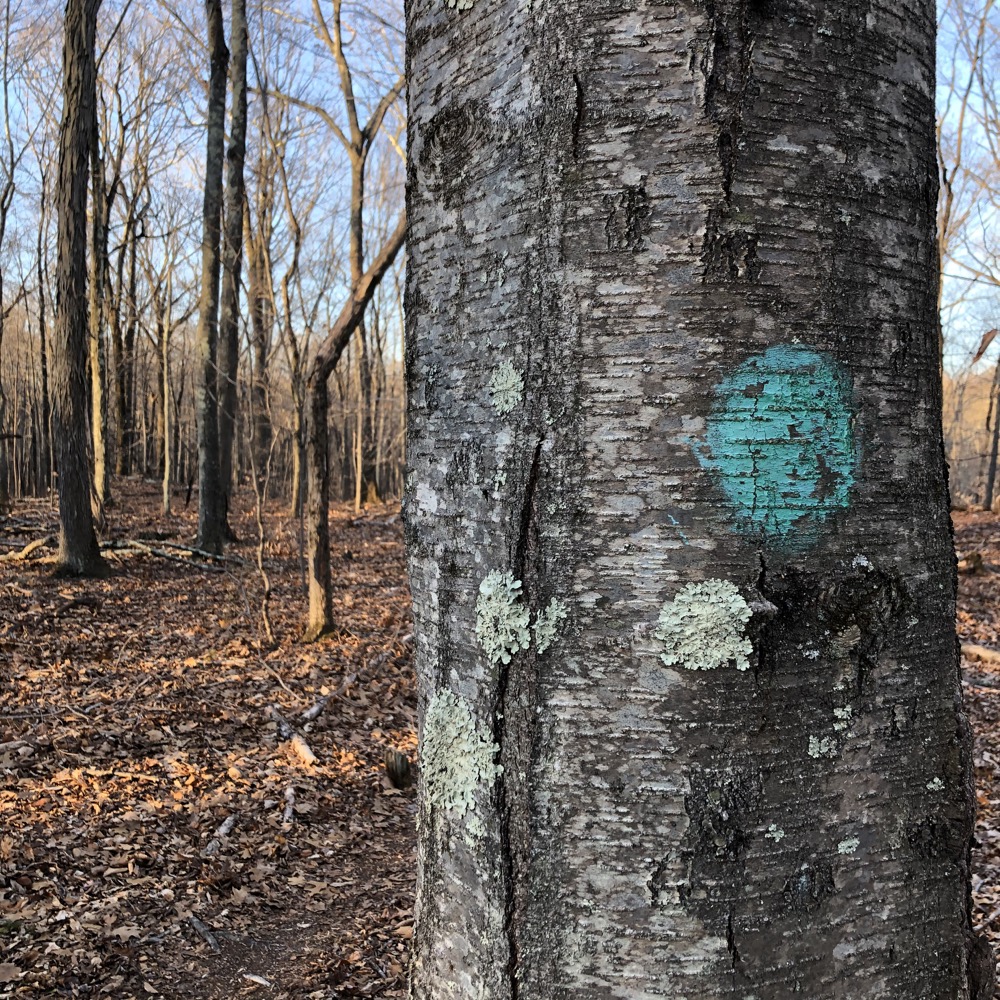 The Sargent River Trail forms sort of a skinny loop down to an intersection with Sperry Road and the Amity Road to Dillon Road Connector. This connector trail is also an RWA permitted trail, but as I wrote on my page about it, that’s a bit absurd.

Sperry Park and its beautiful waterfall is here too, where all this comes together. Sperry Park and the falls are open to all. As is Sperry Road – except to cars in winter. The connector trail will take you to other hikeable properties in either direction. But don’t you dare think of heading north to Lake Chamberlain if you’re not an RWA permit holder! 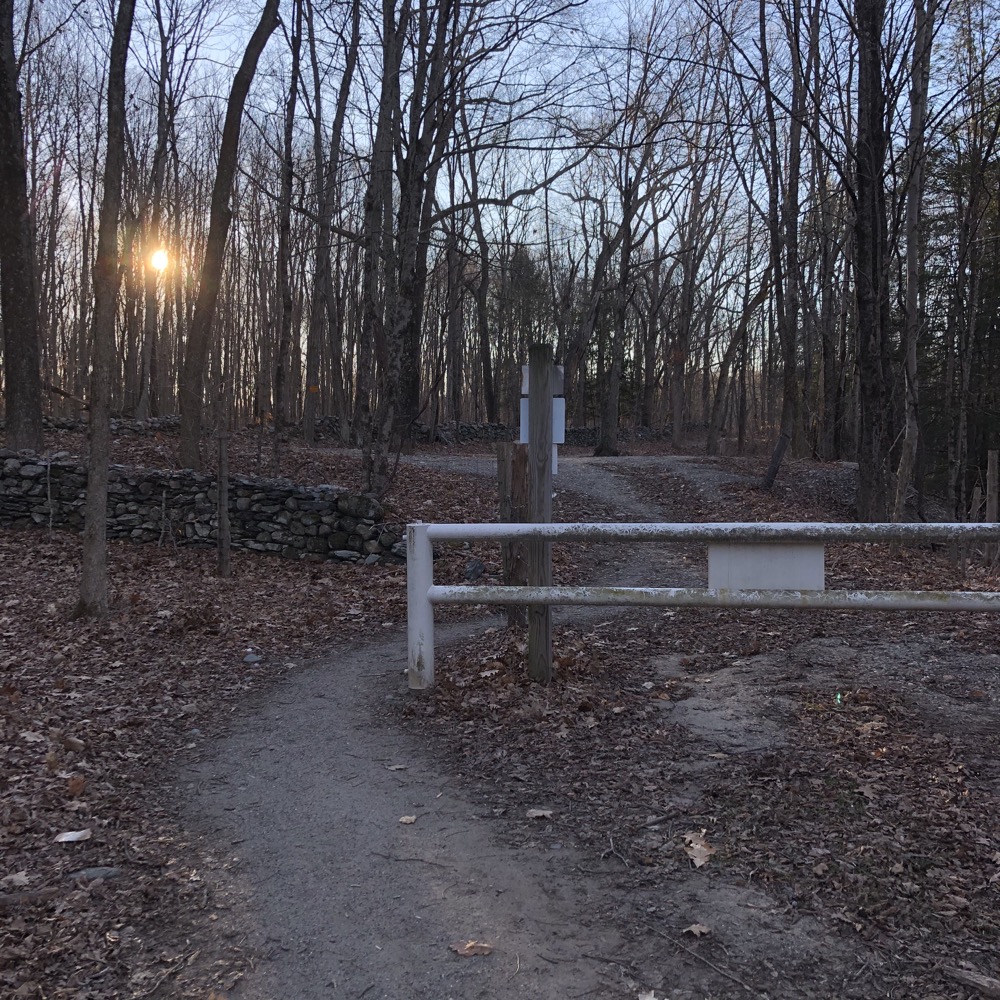 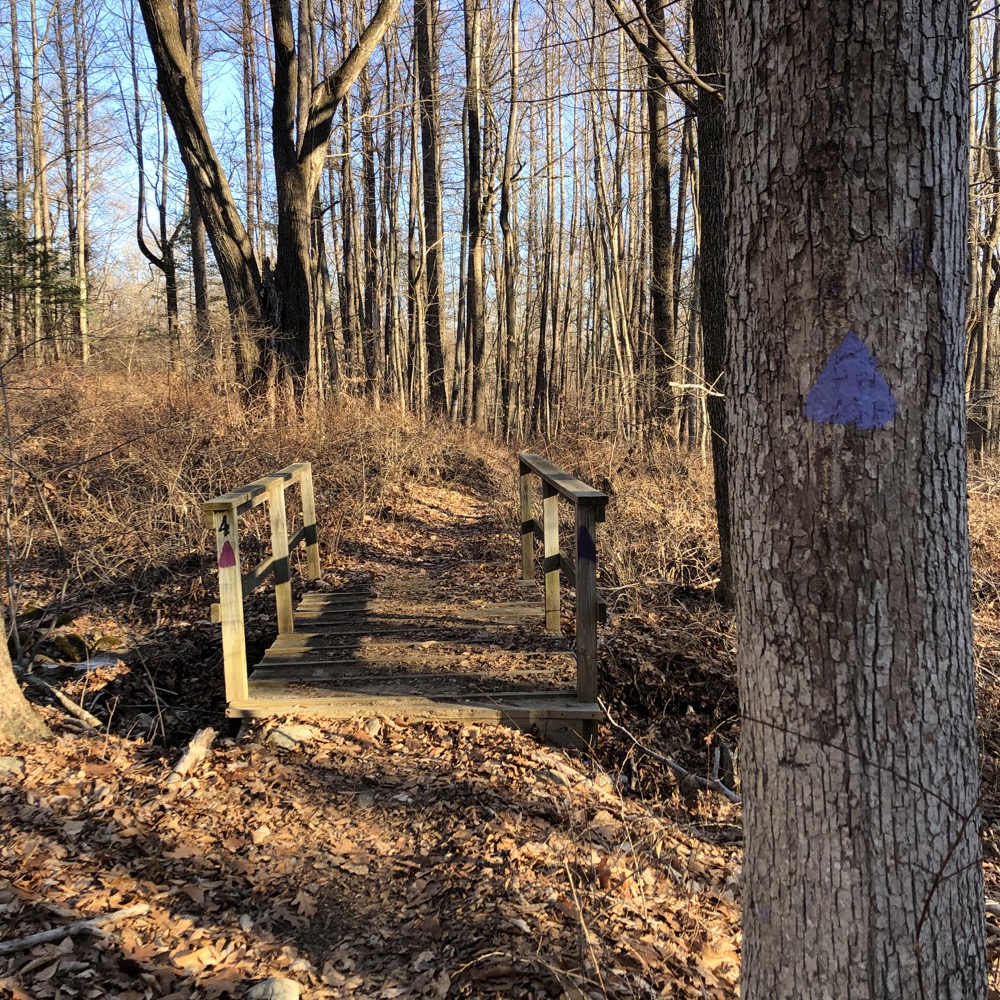 There’s this whole thing called the Woodbridge Greenway Trail which is great, as it traverse across the whole town! So that’s why it’s really weird this mile or so connecting the two roads is officially off-limits to non-permit holders. Come on now.

After hiking down to Amity Road and then up to Dillon, I walked the final Lake Chamberlain Trail: the Purple-blazed Stony Loam Trail. As the brochure says, the trail is named for the dominant soil type in the area.

There wasn’t anything exciting on the Stony Loam Trail and before I knew it, I was back up on the dam one last time walking towards my car in the bright, warming sunshine. Lake Chamberlain is yet another beautiful RWA property that relative few access and enjoy. 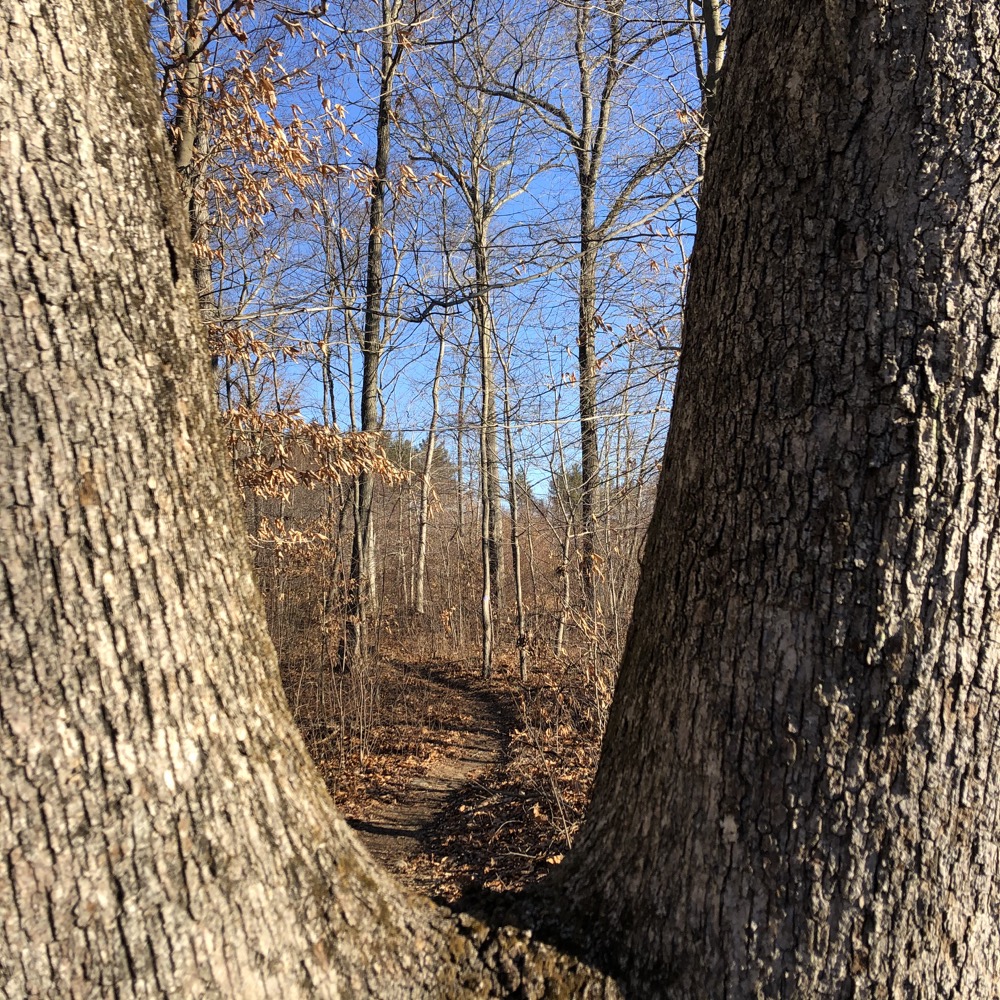 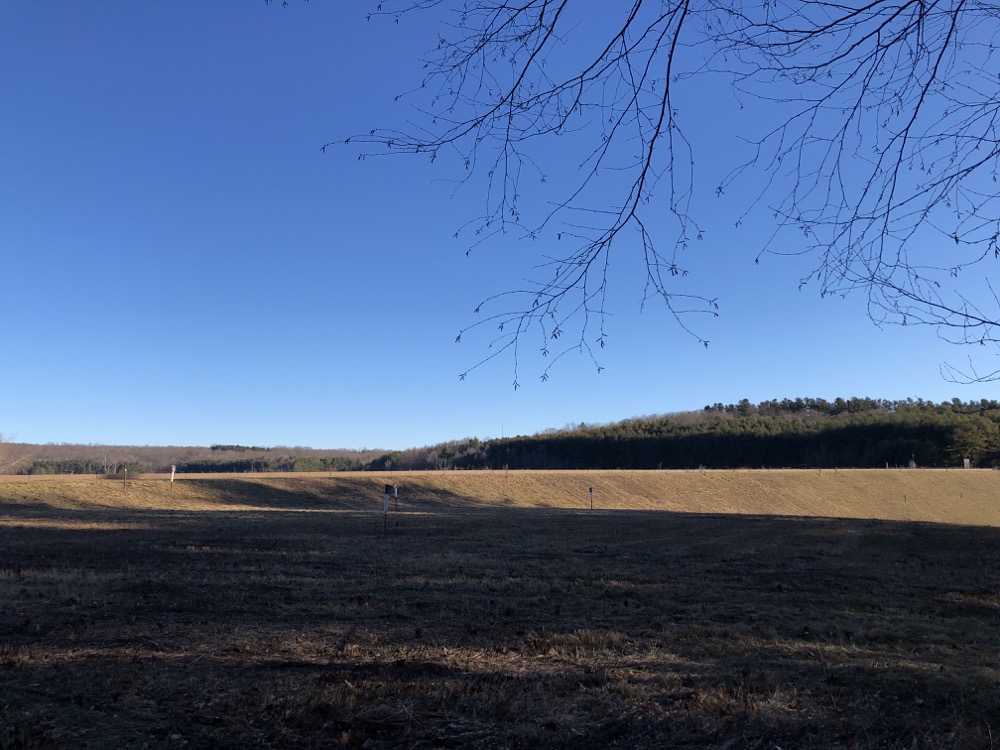