I’m not a decorator. Of course I’m not an interior decorator; what I mean by my opening salvo is that I just don’t decorate anything. Once, while helping my wife get the Christmas decorations out of their basement lair, I asked, “if you lived alone, would you decorate for Christmas?”

“Of course,” she said. Which I admitted I found odd. 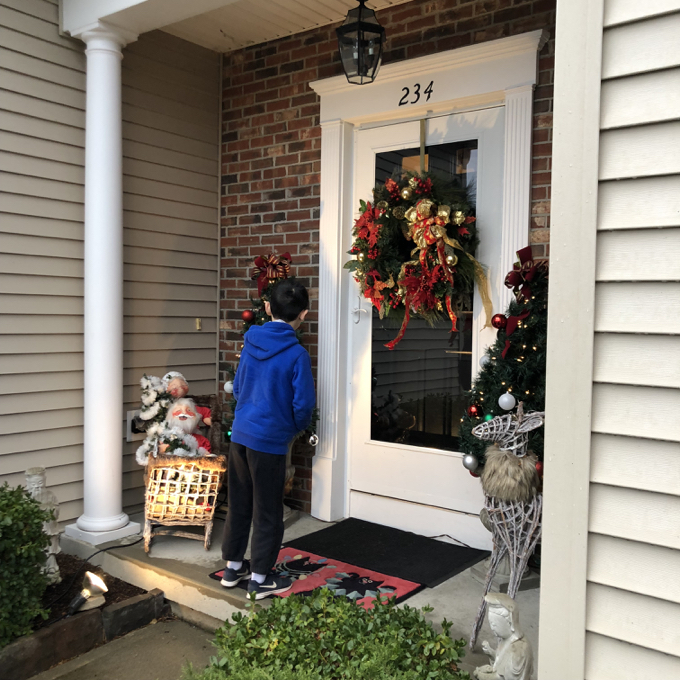 “If I lived alone, I wouldn’t bother with one scrap of Christmas stuff.” After all, why would I? In the end, it’s just clutter that you intentionally create. (Having two sons, of course I understand it just has to happen.)

Then the big question came. “If we didn’t have kids, would you still decorate for Christmas?” Again, Hoang answered in the affirmative. I should have left it alone, but… 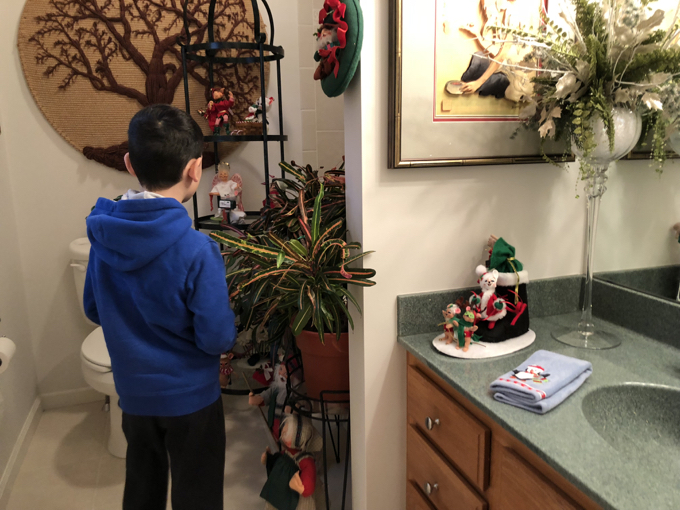 Hoang passionately defended her desire to decorate the house during the Christmas holidays, even if it was just the two of us. Keep in mind that she is not Christian, nor is she into knick-knacks. As you can tell, this conversation has stuck with me because, quite simply, I just don’t understand.

And so, when it comes to the George Saponares of the world, I really don’t understand. But I can appreciate and enjoy… in small doses. 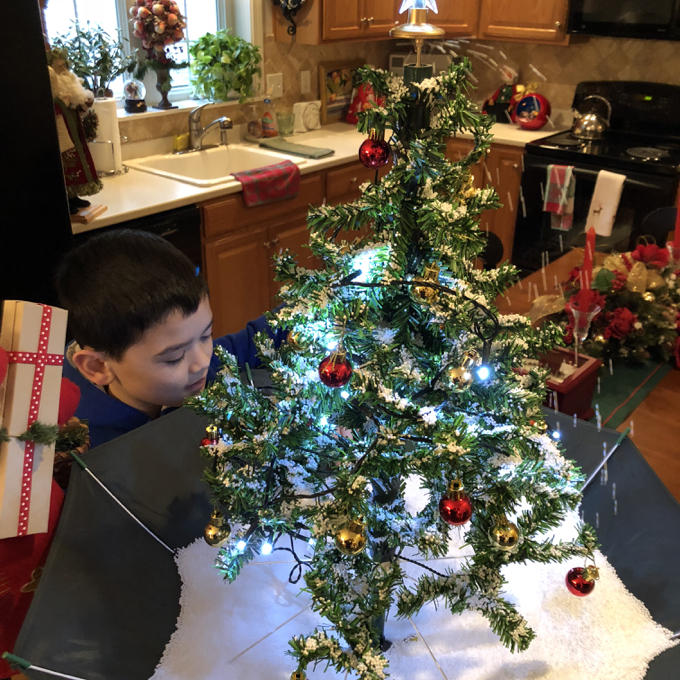 There are several “Christmas Houses” around Connecticut, but they’re usually just houses inhabited by dudes who like Christmas lights. While interesting, I just don’t see that as something to bother writing about. The Windsor Christmas House of Mr. George Saponare, however, goes several levels deeper. My man loves Christmas and Christmas decorations and Christmas trees and Christmas everything. 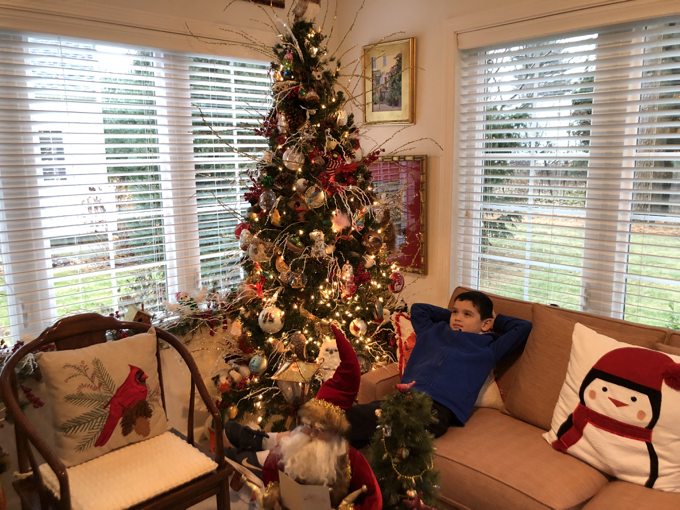 More importantly, he loves Christmas giving. But we’ll get to that in a minute. Who is George Saponare and what the heck did I drag my 7-year-old, dressed in his finest blue-on-black sweatshirt and too-short sweatpants, to on a dreary December afternoon?

From the Windsor Patch:

[George] Saponare’s ever-growing collection is essentially a festive museum of holiday treasures for people of all ages. Almost every inch of every room features colorful and special items including 26 fully trimmed trees decorated in different themes, collections of Santas, animated animals, and colorful holiday ornaments, table displays and artwork. Even the bathrooms and laundry room are decorated! 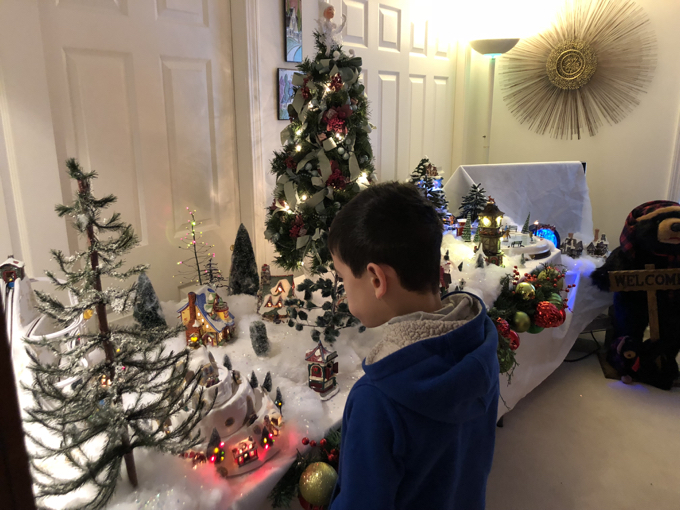 Hold on. Did somebody say “museum?” Sure did. Usually, when someone says something is a museum, I treat it as such. And so many museums are nothing more than focused collections of eccentrics. Hm. I never planned to treat this place as a museum… and I won’t. Simply because I’ve never heard nor read that Mr. Saponare considers it a museum.

The house is an attractive townhouse that has a Tardis-like quality. That is, it appears much larger inside than it does from the outside. Of course, maybe that’s just the Christmas magic working on me, I’m not sure. Due to his homeowner’s association rules, the outside is barely decorated at all, which is also a bit confusing upon arrival. 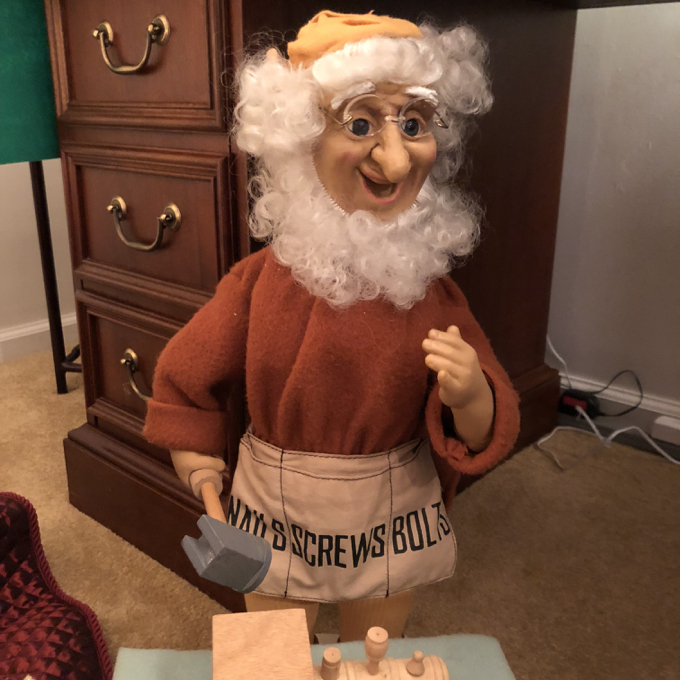 The house is outfitted with white wall-to-wall carpeting, which is the craziest part of this whole thing. Literally hundreds of visitors tour the house during its open weekends and they all come tromping through after walking outside in the mud, snow, and general Connecticut winter muck. I told Mr. Saponare that he was nuts for that and he merely smiled. A true Santa’s helper, this guy.

He begins setting up the displays in September. September! I told you he was cra- errr – eccentric. I can’t reiterate enough how much Christmas stuff is here. It’s pretty incredible. 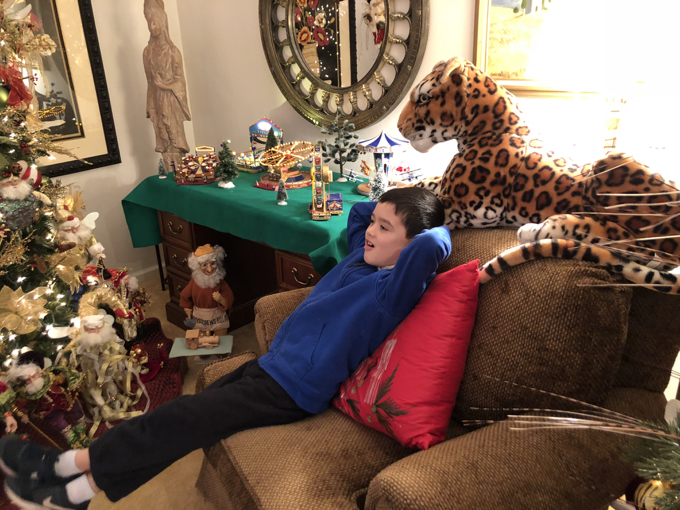 Saponare has been collecting Christmas cra- errr – stuff ever since he was a kid. According to him, he “just likes the stuff.” (That’s a real quote from The Hartford Courant. Not only does he buy and collect the stuff, but once he got going with a notable collection, friends and family began feeding into his insani- errr – hobby. 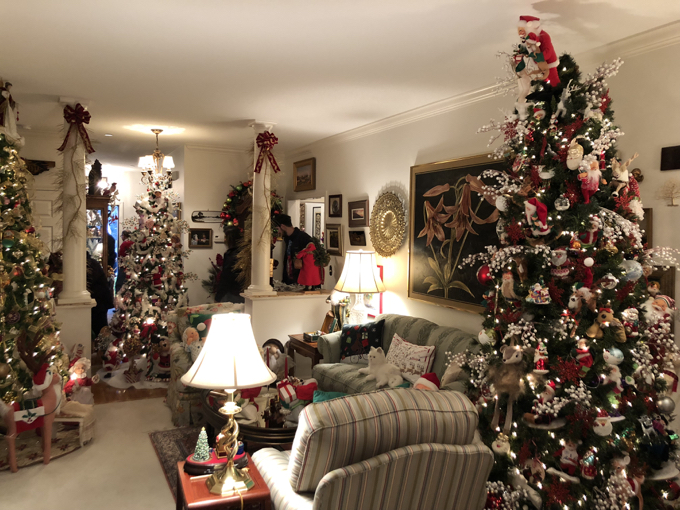 I don’t know where he stores it all, but he did tell me that he has a large basement.
Around 2011 Saponare had an epiphany. Why not share his collection with the world and raise money for charity? Awesome. While I doubt he turns people away, the price of admission is non-perishable food and/or a donation for a local food bank. I’ll stop making fun of him now.

Hold on though. I can’t let a few of his “decorations” go. Hidden amongst the cheer, joy, and cutesy good tidings there lurks a bunch of horrifying dolls and Krampus-inspired displays. Calvin was the one who first pointed out the severed Santa head proudly displayed next to the severed cowboy toddler head: 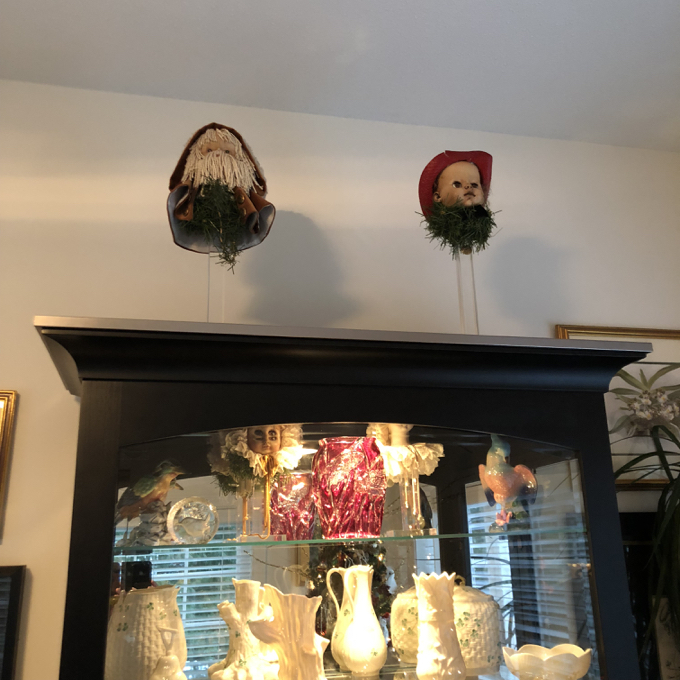 Suddenly, our tour took a dark turn. Everywhere we looked, Ghosts of Christmas’ Past haunted us. Evil elves pranced among the chandeliers: 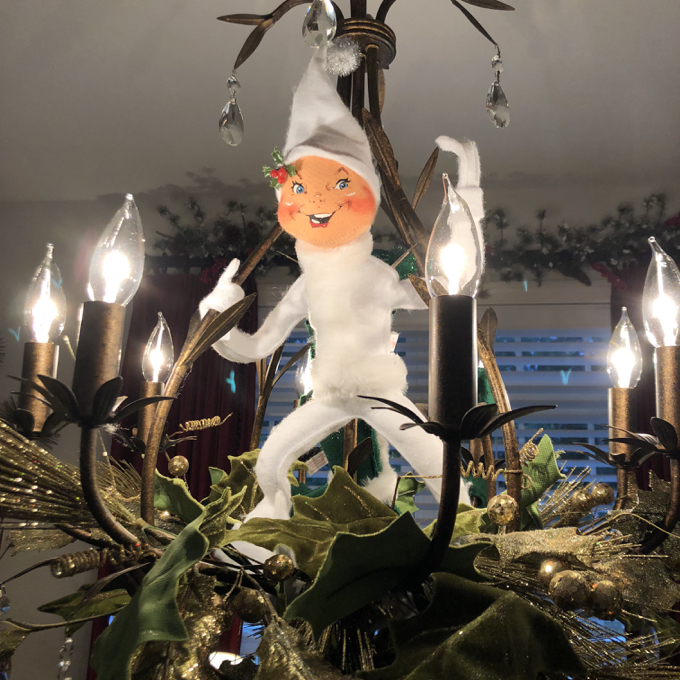 Ash-colored girls stared at us, unblinking, from underneath their holiday garb: 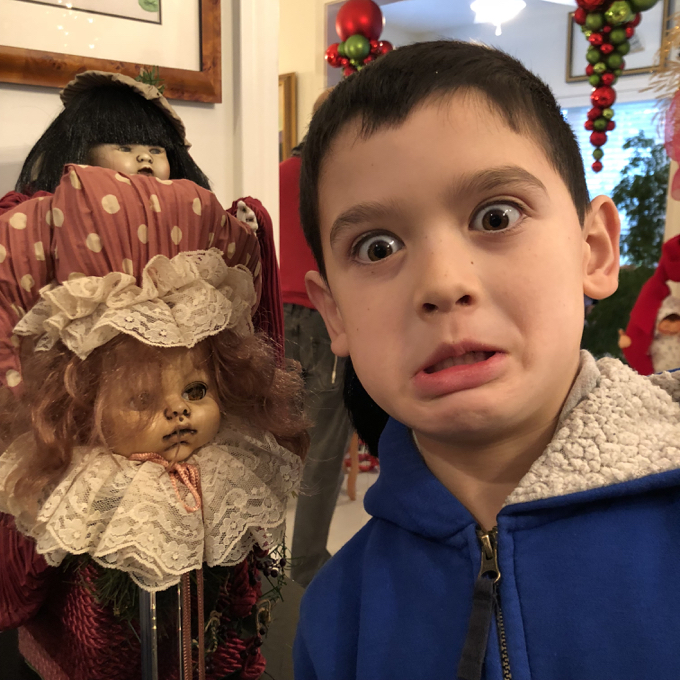 Cute little Asian girls are never not cute. Except when they have the hands of the undead: 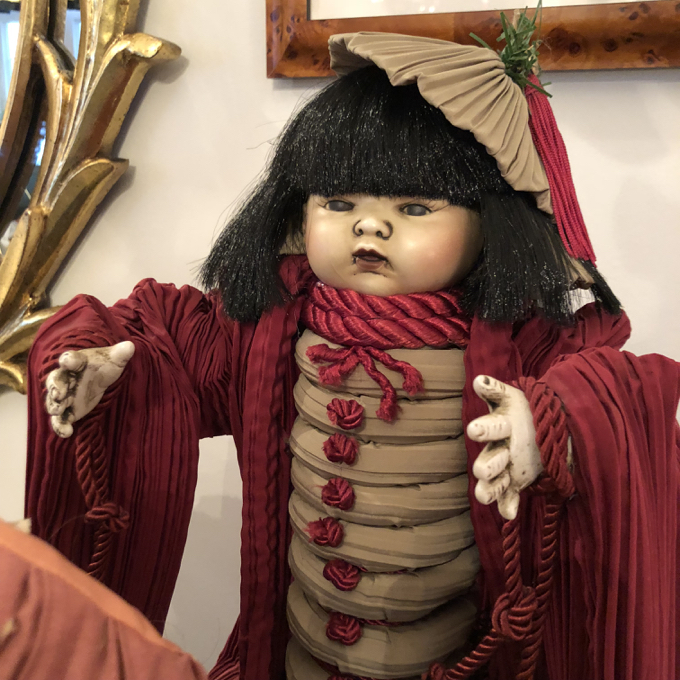 Speaking of Asians, Mr. Saponare has a decent collection of Asian art around his house, which of course takes a back seat to all the Christmas stuff. I made a point to tell him that I really liked some of the stuff and we had a nice conversation about a few of his travels abroad. He’s a super nice guy who just loves Christmas and of course I tip my hat to him for his charitable giving. He estimates that each year he has handed over about 300 pounds of food and uncounted monetary contributions. I had brought a couple cans of something, but after seeing the effort he puts into this annual event, and knowing the carpet-cleaning bill he faces each January, I gave him a rather generous donation as well. 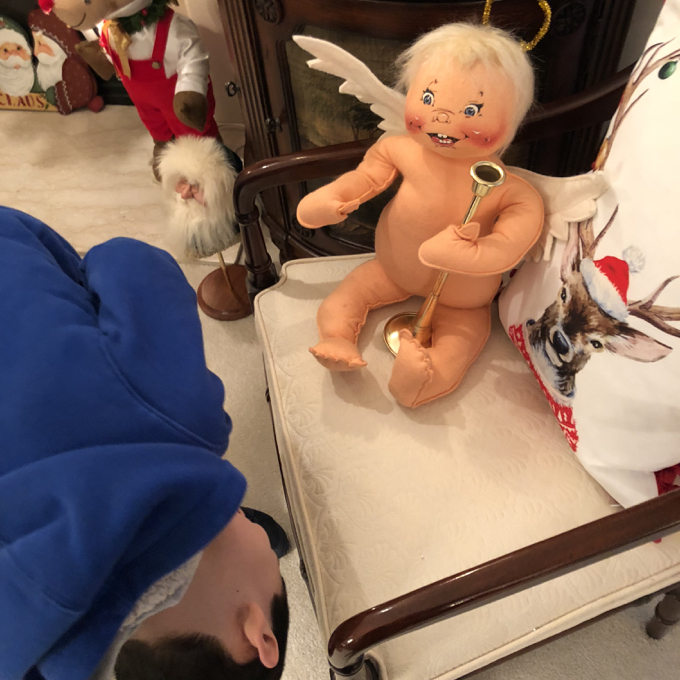 The question he gets the most is, “why?” His answer is simply that he enjoys doing it – something I fully identify with, as it’s my answer to the same question regarding this very website. So while I’ve had some fun at Mr. Saponare’s expense here, I totally get it.

I mean, I totally don’t get it on the face of it, but on a deeper level? We are the same, Saponare and me.

Except for the Severed-Santa head thing. That’s just weird. 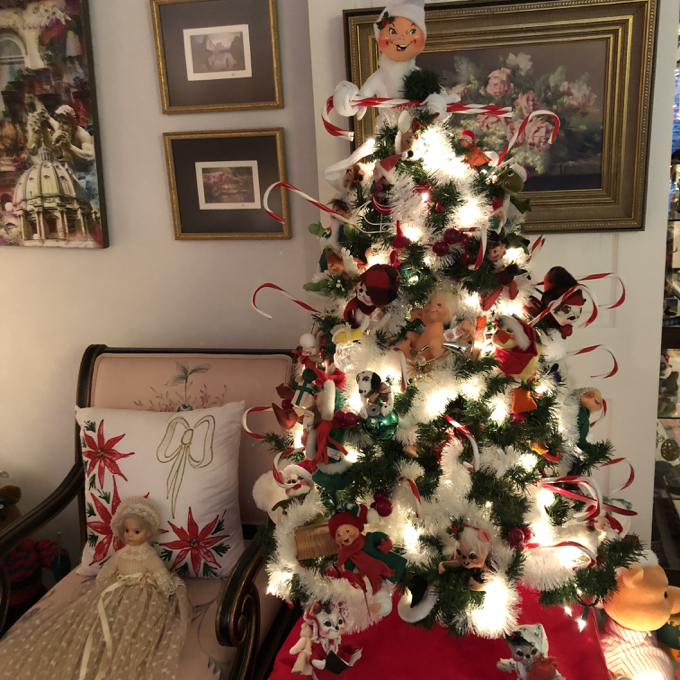