Since this was hiked and written, the Kleen Energy plant has been built near the terminus and the trail has been rerouted/shorted a bit. It no longer has the road walk at the end.

This is it. My final Mattabesett Trail section. This 80 year old 50+ mile horseshoe trail around Middletown wowed me each time out. The fact that this trail is in such close proximity to parking areas (not to mention major highway crossings) and has a few loop options along the way really makes it a very accessible trail. There are many spots where one can simply park, throw on some shoes, walk 20 minutes, and stare out upon a remote (seeming) lookout across central Connecticut. I loved it. 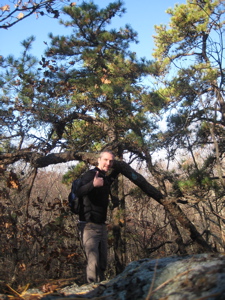 For my part, I used some creativity and double-backing to complete the trail solo in nine separate hikes. This was especially true for this, my final section, as I had no car spot and hitch-hiking from a dead-end road at a power plant isn’t recommended. I hiked the 4.7 miles creating a loop with the Reservoir Loop Trail and a healthy double-back “tail” section, got in my car, drove to the terminus of the trail, and did the out-and-back few miles to complete the hike – and trail. Sure it’s confusing, but so is life. 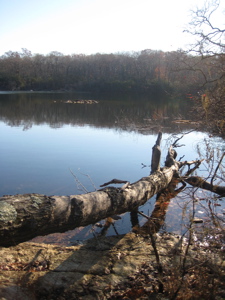 I began my day where the Mattabesett crosses Bear Hill Road because I didn’t feel comfortable parking at the reservoir along Brooks Road. The Walk Book says you can, and the Hartford Courant’s article on this area says you can, but I’m leery of reservoir parking ever since I got a ticket in New Britain while hiking the Metacomet. I’d already hiked this little third of a mile section last time out, but it’s easy and flat, so no biggie.

Once on Brooks Road, the trail follows it to the left (west) and enters the woods just past the reservoir. This was (I think) only the second time on the whole trail I couldn’t find a blaze – the other time was also entering the woods off a road (Route 147). I poked around for about a minute and found my way. I saw a few bark chunks like this: 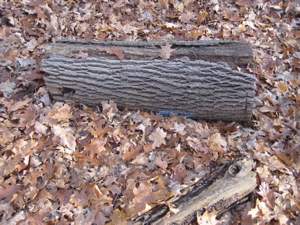 (See the blue blaze at the bottom)

… Which leads me to believe someone, for some reason, “hid” the trail on purpose. Which makes no sense at all because this is all public land here. Anyway, I enjoyed the next section as it ambled along the beautiful Asylum Reservoir #2. Having done the Reservoir Loop which comes back on the other side of the water, I can unequivocally state that the Mattabesett has the far better side. In early November, the first wintry wisps of ice were forming on the water’s edge. 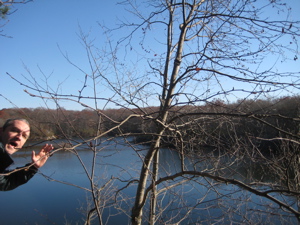 The trail leaves the reservoir and begins a series of ups and downs over knolls, nubs, and rock jumbles. It’s all quite fun, despite the frosty slippery leaves underfoot. There is even a nice viewpoint here, which I sat at longer than usual knowing I only had a couple left along this trail. I was reminded again why I love Fall in New England. 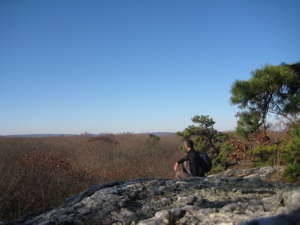 Moving on northward, I crossed the Reservoir Loop Trail the first of three times and made my way along a rocky ridge and then down across a gurgling stream. I wish I could write like a real writer, as I’m starting to get wistful for my sweet Mattabesett.

I crossed Reservoir Road and ascended steeply up to another ridge and my second viewpoint of the day – and penultimate of the entire trail. *Sniff* I present to you, Asylum Reservoir # 1: 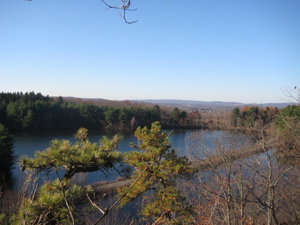 Wait, what’s that I see in the distance driving across the water? 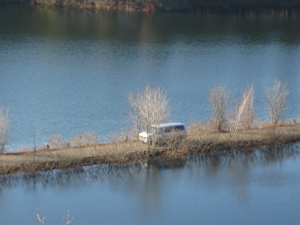 Hm. A white van. Was it the CFPA Greeting Committee, to meet me at trail’s end with laurels and my completion patch? Time would tell. After the view, the trails heads north again along a rocky ridge and then circles down a steep cliff face (really just a large boulder, but I won’t quibble). 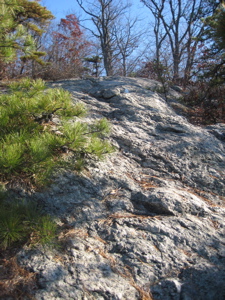 Just past the cliff is another “cave” as we call overhanging boulders here in Connecticut; called “Rock Pile Cave.” Actually, this one was quite sheltering – far more than most – and I could envision actually living here for a while. (Let it be known that taking the picture of me in the cave was one of the hardest self-timered shots I’ve ever taken – and I’ve taken a LOT. There was just no where to put the camera, so I built up a teetering tower of rocks that swayed slightly in the wind.) But I got the all-important shot: 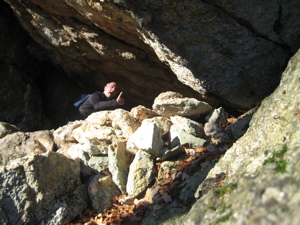 Just as I completed the picture and got going again, I heard voices. Soon I was met by a group of about seven teenage boys in decidedly non-hiking apparel with two adult chaperones. They all seemed to be having fun and hopefully really enjoyed there time out, because a few minutes later down the trail I passed the parked white van from whence they’d come. They were from the nearish Connecticut Juvenile Training School. Not a fun place; it is Connecticut’s only secure residential treatment facility for adjudicated male juvenile offenders between 11 and 16 from all over Connecticut. 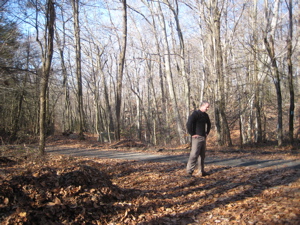 As I was saying, wait, what? What are you doing here? 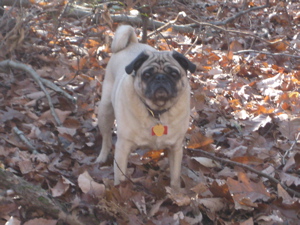 Hm. A quiet pug tied to a tree here in the woods with no owner in sight. He seemed well and had a collar on, so I continued up the trail. Continued across, *sniff* the last decrepit wooden bridge along the Mattabesett Trail: 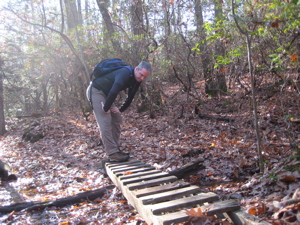 I gathered myself and quickly walked west through laurel thickets over flat land to a power line cut. Once there, I turned around and headed back to Reservoir Road (and the pug, which was still standing sentry over… the woods) to begin the Reservoir Loop trail back to my car.

I drove around to the end of the trail along River Road. There is ample parking across from the power station, but the CFPA recommends telling the security guard that you are a hiker and your car won’t blow up. It’s been 8 years since 9/11, so I chanced it – but did leave a note on my dashboard in case someone cared to check it out. I figure the baby seat in the back gives me some leeway too. 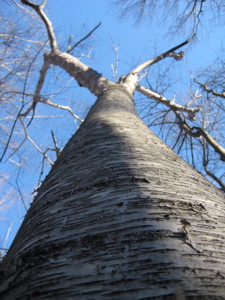 I quickly made my way to the trail and pretended not to notice all the exciting stuff towards the end of the trail as I speed-walked to where I left off at the power line earlier. “La-la-la” I said as I wore blinders and didn’t avert my gaze from the ground in front of me. Before long I was at my power line, took off the metaphoric blinders, turned tail, and continued up the trail.

Did I say up? Because I meant down. Down the hill along the powerlines towards my… my destiny.

Soon I could see the site all Eastbound Mattabesett hikers yearn to see… the power plant smoke stack in the distance. The Appalachian Trail has Katahdin, Pacific Crest Trail, its Monument 78. I had a smoke stack and it was gloriously gleaming white in the bright Fall sunshine. 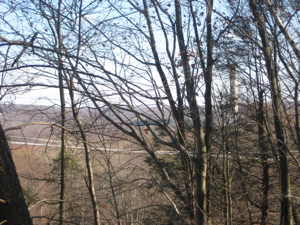 There it is, through the trees, toward the right side of the frame

Almost as a tease, the trail turns west, away from the terminus, but gave me my *sniff* final Mattabesett official viewpoint: 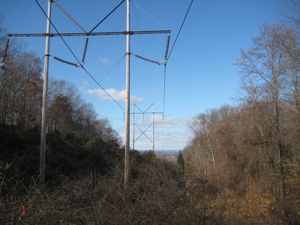 Yup. More powerlines. As if that weren’t enough, the trail then skirts a new construction zone where I believe the state is building some sort of “clean” energy plant or something similar. And, although I’d like to forget this, there is a quarter mile section here that is the worst blazed section of the entire Mattabesett Trail – by far. I lost it going in figuring I was too busy NOT trying to experience my surroundings, but lost it again coming back. There are other trails and jeep tracks here, so it’s somewhat excusable. But it was kind of a bummer so close to the end. 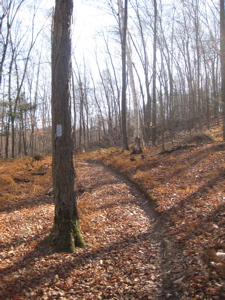 As I walked along this last mile of the Mattabesett, I was struck by the woods. Just plain old hardwood New England woods, but they told a story. They were open; probably cleared for farming not too long ago. Stone wall remnants marked old property boundaries as the golden sun shone on the white bark birches. Leaves littered the forest floor, crunching underfoot. I was alone, but within shouting distance of a major power plant. Removed but connected. It was here I turned around to see the unfettered trail one last time and took this picture: 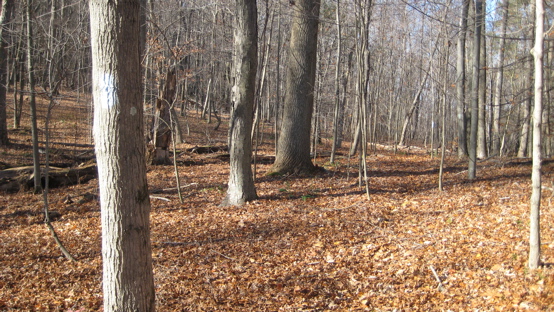 A sighed but smiled and headed down the last few hundred yards of the trail. The smoke stack looming larger. Another three hundred yards and the end is in sight: 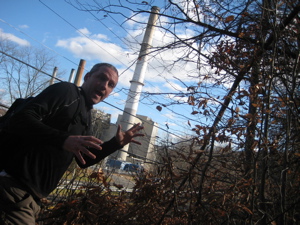 My excitement is palpable

I hit River Road, turned right, and walked. Blazes marked a few telephone poles 15 feet off the road, and then I saw it: 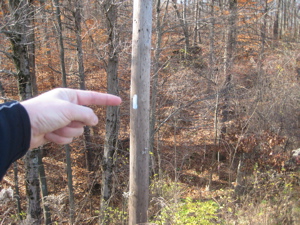 No signage… no nothing. The trail ends as quietly as it began on the Berlin Turpike for me back in May. I reached my car and did my best Toyotathon We Build Excitement jump pose to mark the occasion. 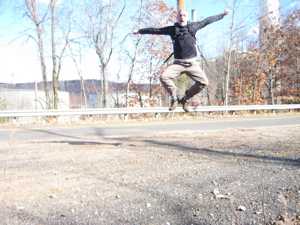 I don’t know why that picture is so washed out. I hopped in my car, chomped on a snack, and headed home after a hike well done. I thought about how best to commemorate the feat; recognizing this was only the first of several 50+ mile trails I’ll be completing, I’ve decided to work up through progressively better celebratory drinks. 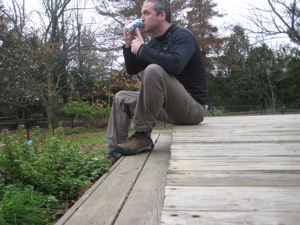 Ahh, Pabst Blue Ribbon Light. To you, Mattabesett, and cheers.