CTMQ > Everything Else > Religion, Remembrances, & Outdoor Art > Site of Stephen A. Douglas Speech

Here on CTMQ, I only feature the more random and esoteric plaques and stuff around the state. (Otherwise, I’d go insane – and besides, other existing resources catalog this stuff really well.) So while I was in Hartford on a purposeful mission to stand at the glorious site of the world’s first payphone, I noticed another little blue plaque across the intersection at Main and State/Pearl. 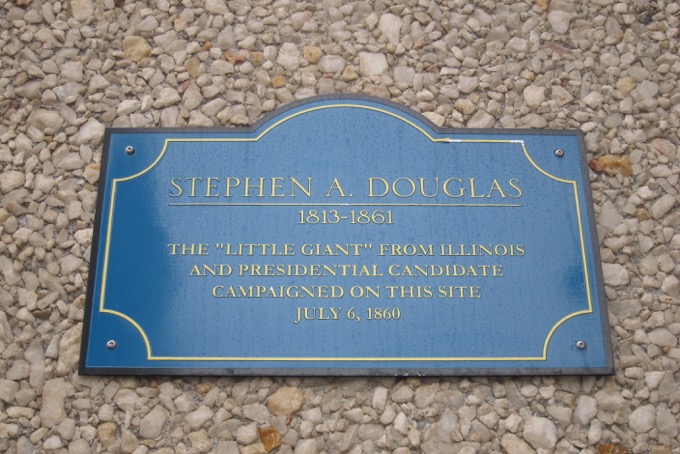 Excited, I ran diagonally through the intersection, avoiding cars and trucks and ignoring the horns and epithets hurled my way. I was merely exercising own personal sovereignty, which says that I refuse to be a slave to traffic laws.

Really Steve? A slave joke? I guess I’m really banking on no one reading this page.

And speaking of banking, the empty, prominently situated office building embarrassment in the center of downtown Hartford at 777 Main Street I was running to has been the Fleet Bank Building, Hartford National Bank and Trust Building, the Shawmut Bank Building and then, most recently, the Bank of America Building.

And banking on speaking, apparently Stephen Douglas gave a stump speech at this location during his failed bid for the 1860 presidency. Because that matters… why? I have no idea. After all, Douglas lost to Abraham Lincoln. Since when do we put up plaques for losers? – Other than, of course, those beloved 1987 Hartford Whalers who almost were the Adams Division playoff champions. Oh, Hartford. 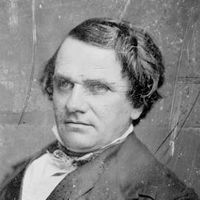 Douglas was not just a loser, but a loser who was wishy-washy on the greatest human rights atrocity in American history. He wasn’t “pro-slavery” necessarily but he was pro states’ rights in a sense, which allowed for continued slavery in the south. (There is some debate about all this. Most agree that Douglas was personally anti-slavery, but politically he wasn’t so much.)

Furthermore, he was bit of an angry little troll. From here:

In person Douglas was conspicuously small, being hardly five feet in height, but his large head and massive chest and shoulders gave him the popular sobriquet “The Little Giant”. His voice was strong and carried far, he had little grace of delivery, and his gestures were often violent.

Your takeaway: Douglas gave a speech in Hartford over 150 years ago. Nowhere near as cool as the site of the world’s first pay phone within earshot.