The chocolate landscape in Connecticut is in constant flux. Some players hang it up and some new players enter. Six Spoons in New Hartford opened in early 2017, but the chocolatier and owner has been in the game for far longer. 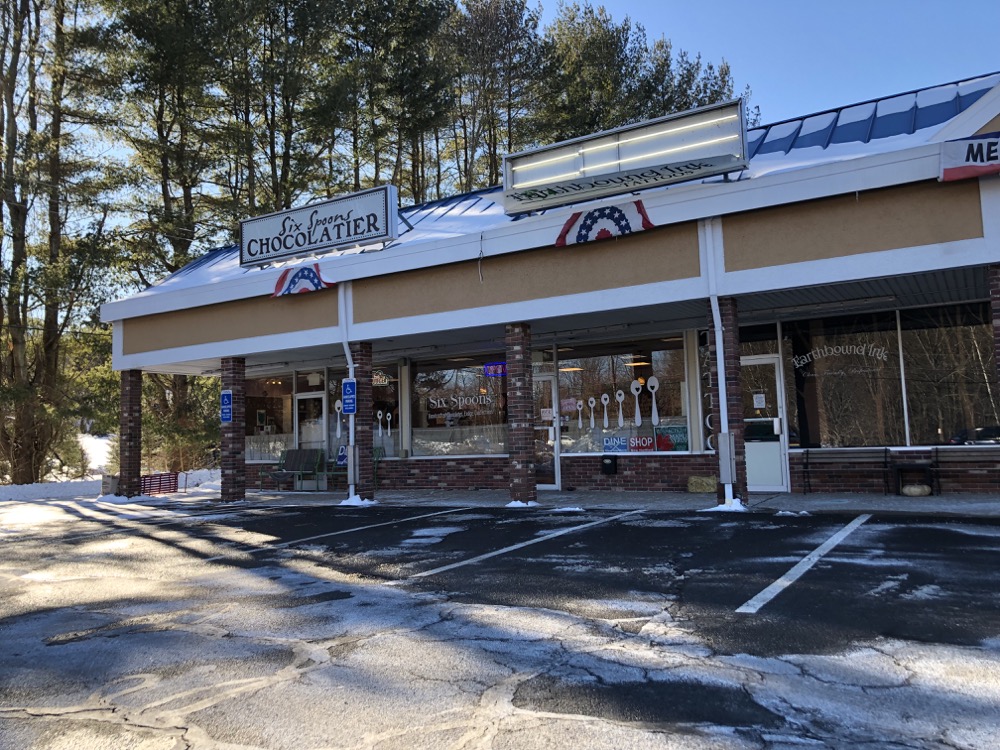 The owner is what people refer to as one of “Crand’s kids”. Anyone who lived in Enfield between 1950 and 2000 probably knows what Crand’s Candy Castle is. (I didn’t but now know that it was a legendary candy maker and store operated for 50 years in a while Colonial and was beloved by all.)

Emily King worked there and helped make candy for years until it closed. Life went on and Ms. King got married and moved to Winsted but couldn’t get the chocolate out of her veins. And now we all have her Six Spoons Chocolatier to enjoy. Their website says that it “can be found in the sweet foothills of the Berkshires” but a simpler and more accurate description is that it’s simply “right across the street from Satan’s Kingdom”

Hence my subtitle on this page… better than “Devilishly Good” in my humble opinion. 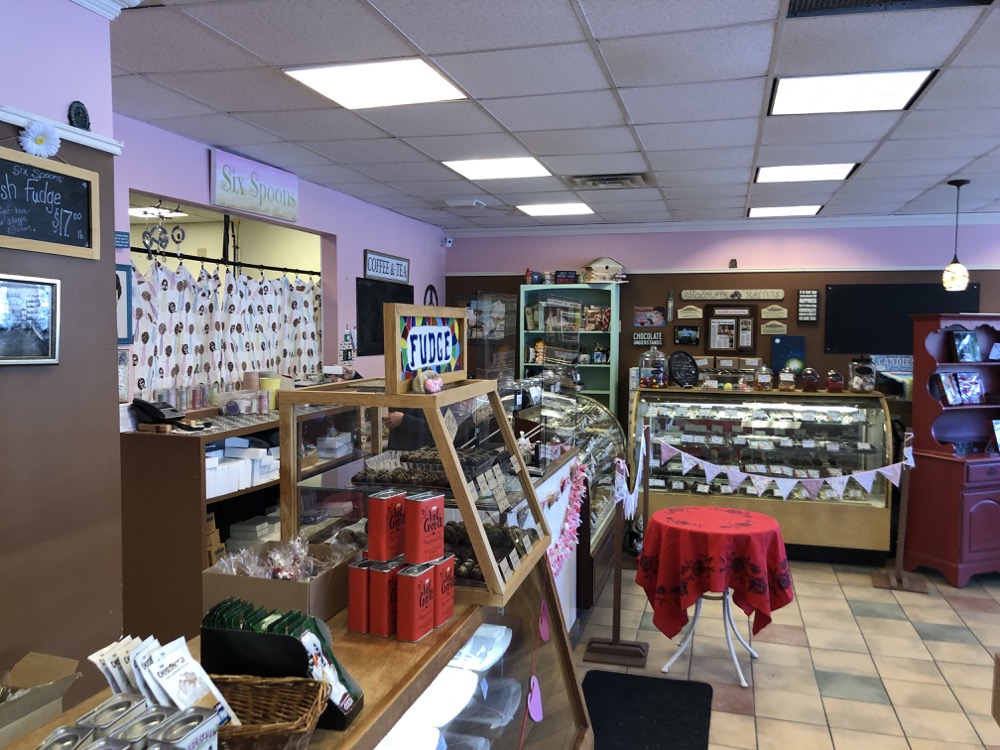 The irony? I guess? of any reference to evil is that no matter where you turn, no matter whom you ask about Six Spoons, you will receive the same feedback: “The women who work there are the nicest humans on earth.” I’ve been noticing that for a couple years in various Connecticut-centric Facebook groups and even when I mentioned that I’d been, the only comment I received was, “I love Six Spoons, the owner is wonderful.”

I have to ask… is she just an average small business owner who happens to make and sell products that make people happy? Or is she truly a fantastically nice woman? 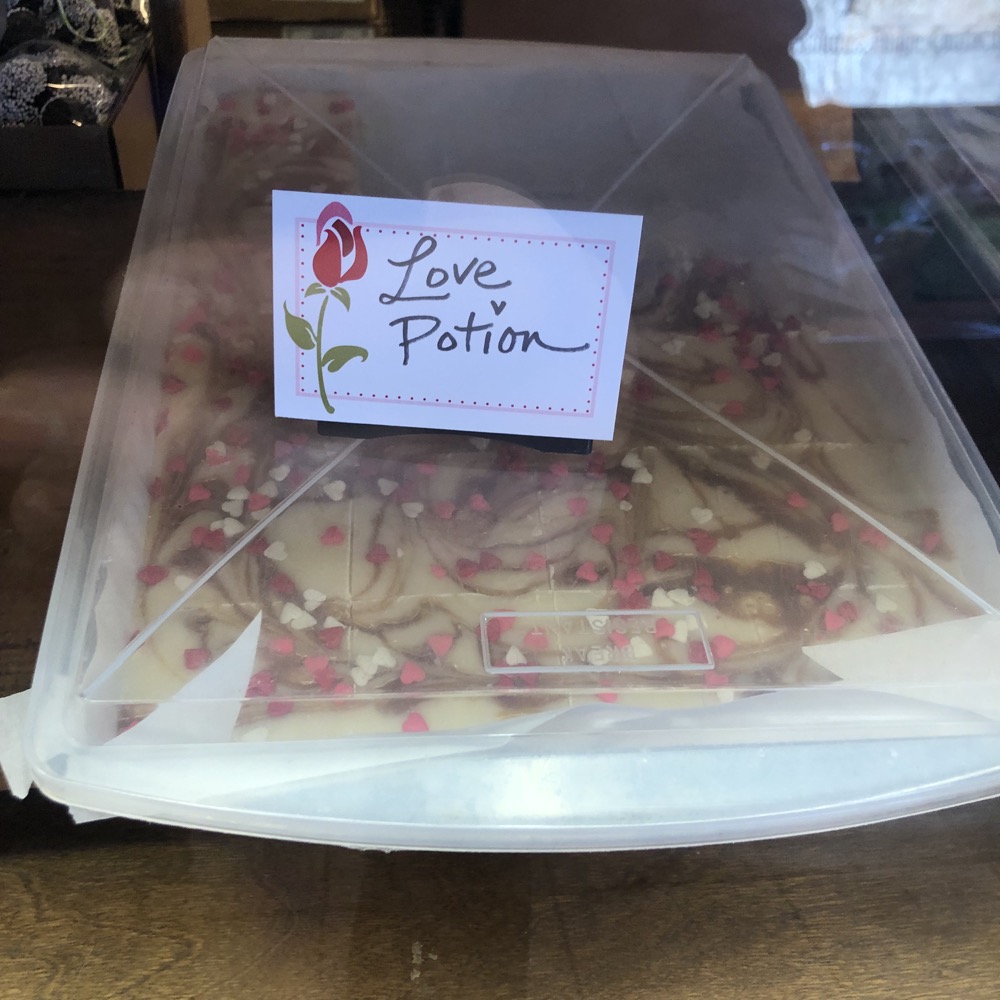 I began leaning towards the latter the moment I entered Six Spoons. There’s a Little Free Library of sorts inside… with puzzles! I had my son Calvin with me who didn’t quite agree with my choice to look at the books first, however. I deferred to him… this time.

Six Spoons has a wide variety of chocolates, fudges, and candies on offer. They also have coffees and teas as well, and I’ve read they also have ice cream seasonally. And old school Crand’s fans can rejoice; King makes the Peanut Butter Crisps the legendary confectionary was known for.

Crand’s apparently made all sorts of candies, including the hard stuff like candy canes and ribbon candy. I think King sticks to chocolate, truffles, barks, clusters, and fudge here – but still has tons of other candy for sale. There’s a slew of “olde timey” candy that is always fun. 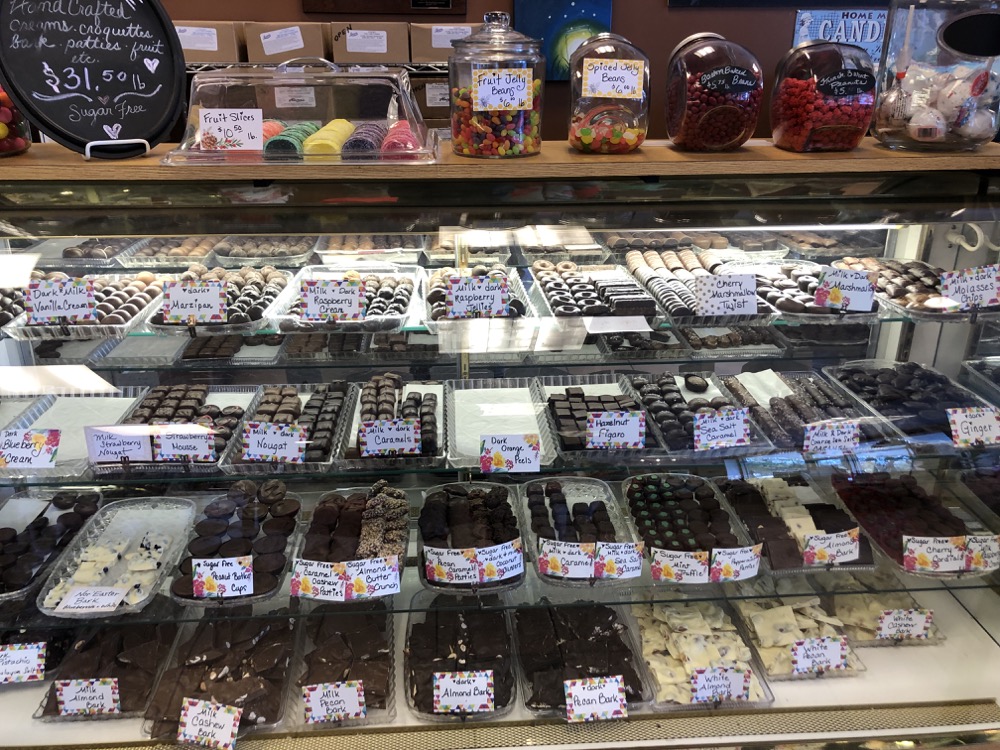 But let’s get to the good stuff: The housemade chocolates under glass. Hold on – do you know the difference between chocolatier and chocolate maker? According to King, a self-titled chocolatier, she blends and manipulates and adds-to premium chocolates to make her treats. A “chocolate maker” is a “beans to bars” person. Hm. I’m not sure how many true “chocolate makers” we have in Connecticut then.

I’ve known that most places import giant chunks of base chocolate material, but never really thought about what it would take to actually just import cacao and go from there. It’s probably not really worth it, but it warrants investigation. For someone else. I’ve got Six Spoons treats to eat.

(Six Spoons, by the way, is a reference to King’s family – her, her husband, and their four children – and the old copper kettle at Crand’s in which employees would use spoons to stir the concoctions. In case someone asks.) 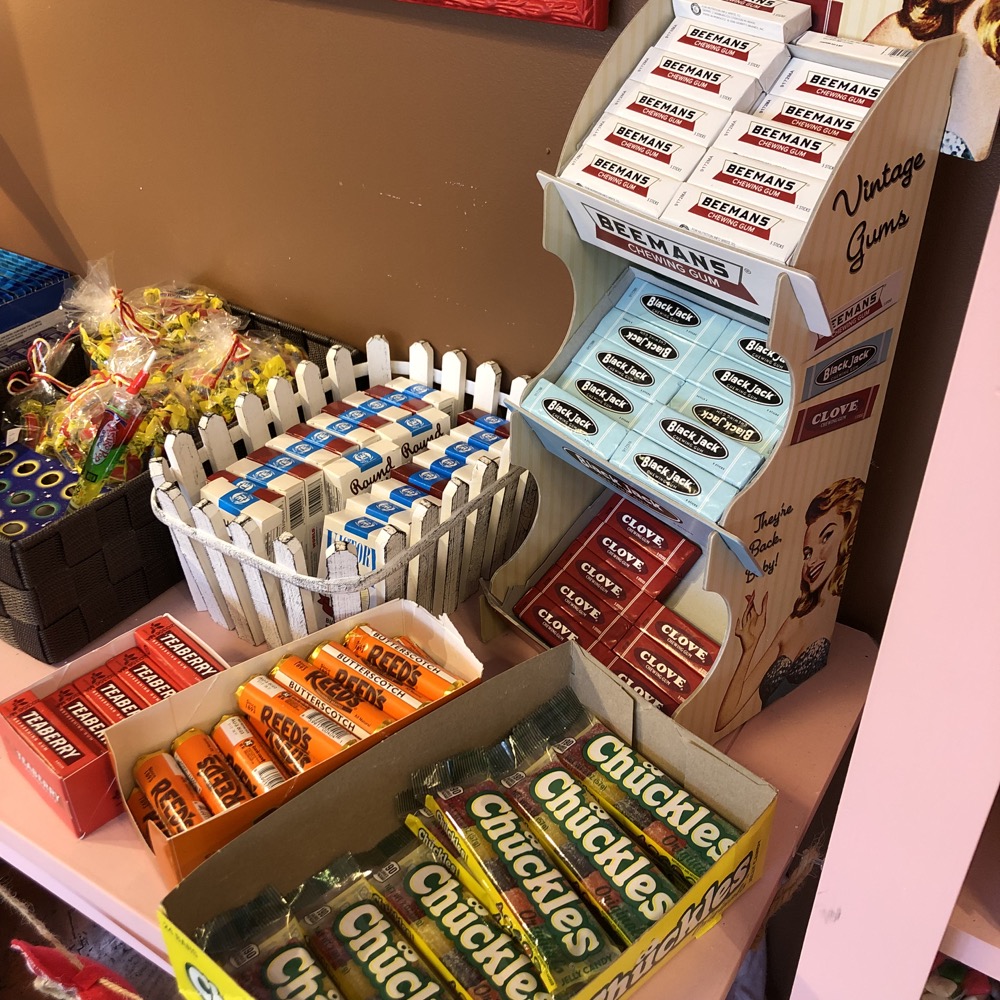 Let’s see… I always buy for my wife who much prefers milk chocolate to dark. She can’t eat certain nuts and prefers simplicity to fruit or spice additions. I chose several for her and then got myself a dark chocolate pecan cluster that no one in my house can eat besides me. That’s literally the only way I’d ever get a taste.

Big Brain Steve over here. Potentially giving my wife and child an allergic reaction in order to have a piece of candy for myself. I gotta do what I gotta do.

Meanwhile, Calvin had asked if he could by some peppermint bark. Random, but okay, fine. He arrived at the counter with two bags. Two?

Ah, yes, that’s right. Valentine’s Day was on the horizon and he had to get something for his… I’m not sure what you call it in 5th grade. “Girl. Friend?” You know, the girl he “likes,” who knows he likes her, but they don’t actually talk or interact? Yeah, her. I remember those days. I think I had a couple “girl. friends” in 5th grade too. 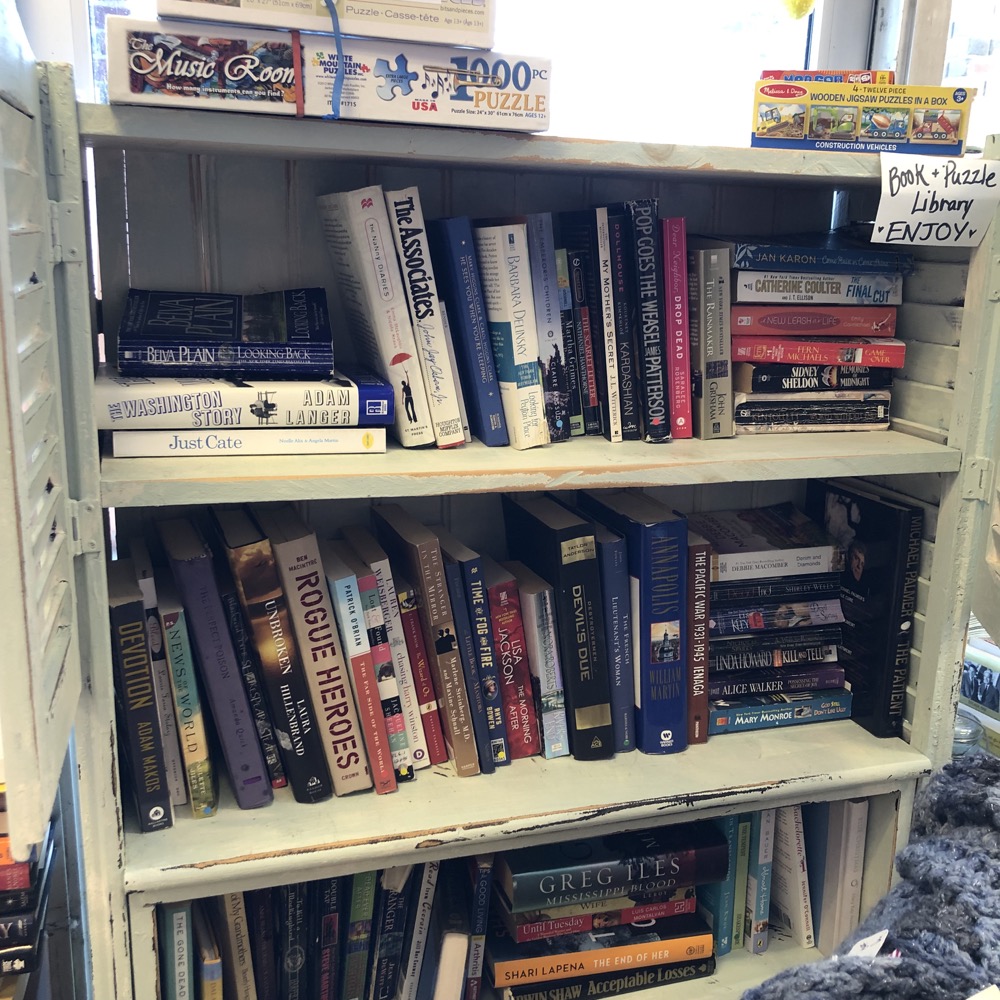 I also had to pick up an old school gum pack; Teaberry, Beeman’s, and Black Jack. Turns out, some company in Morocco bought the naming rights and has tried to approximate the original flavors but… this wasn’t good. Not Six Spoons’ fault at all.

The book selection is pretty large for the space and yes, we took a puzzle that we’ll return soon enough, as we drive by Six Spoons quite often. When we got home and my wife asked about our little trip, I excitedly showed her the puzzle I scored and –

Hoang gave me “that look” about my effusiveness over a puzzle and pushed me aside to get to the chocolates, pushing my delicious Poison Cluster aside and indulging in the espresso milk chocolate and the others I had bought. Meanwhile Calvin was trying his best not to move on to the second bag of bark, having finished his own on the ride home. (I can report that the peppermint bark remained untouched and I can assume it made it into the hands of Calvin’s “girl. friend.” 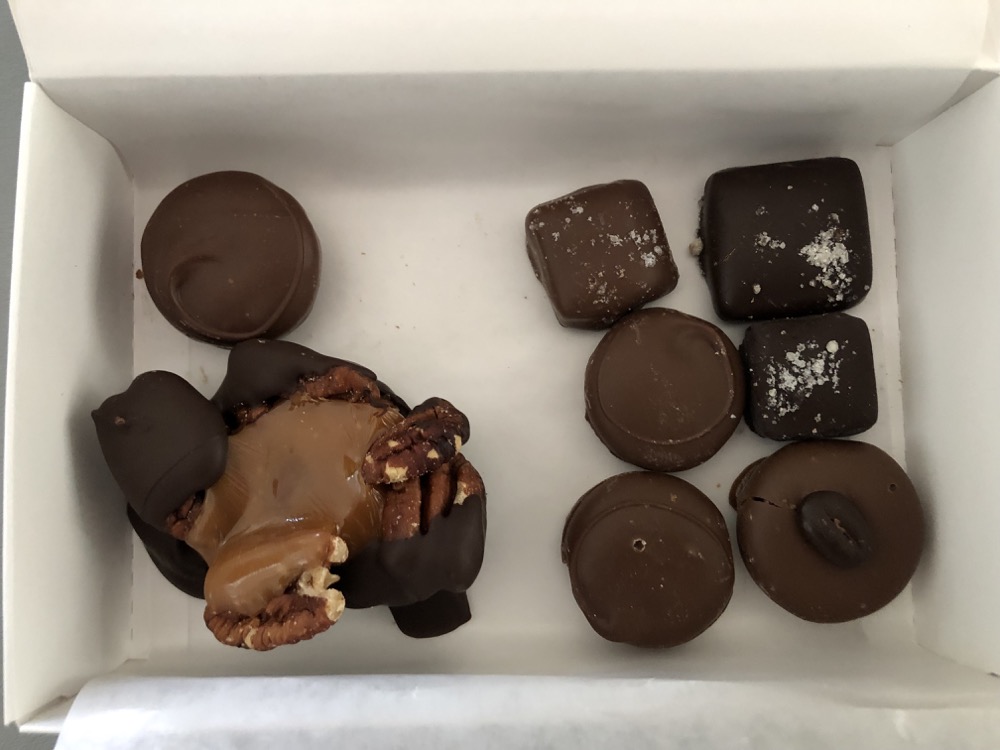 My interaction with (I assume) Emily King was perfunctory, as I was arguing with Calvin most of the time anyway. (He wanted to buy everything and I didn’t.) I’m sure she is as lovely and warm as everyone says – I have no reason to disagree.

Hoang very much enjoyed her chocolates and Calvin loved his. My nut cluster was wonderful and I look forward to returning the puzzle… and buying more treats. 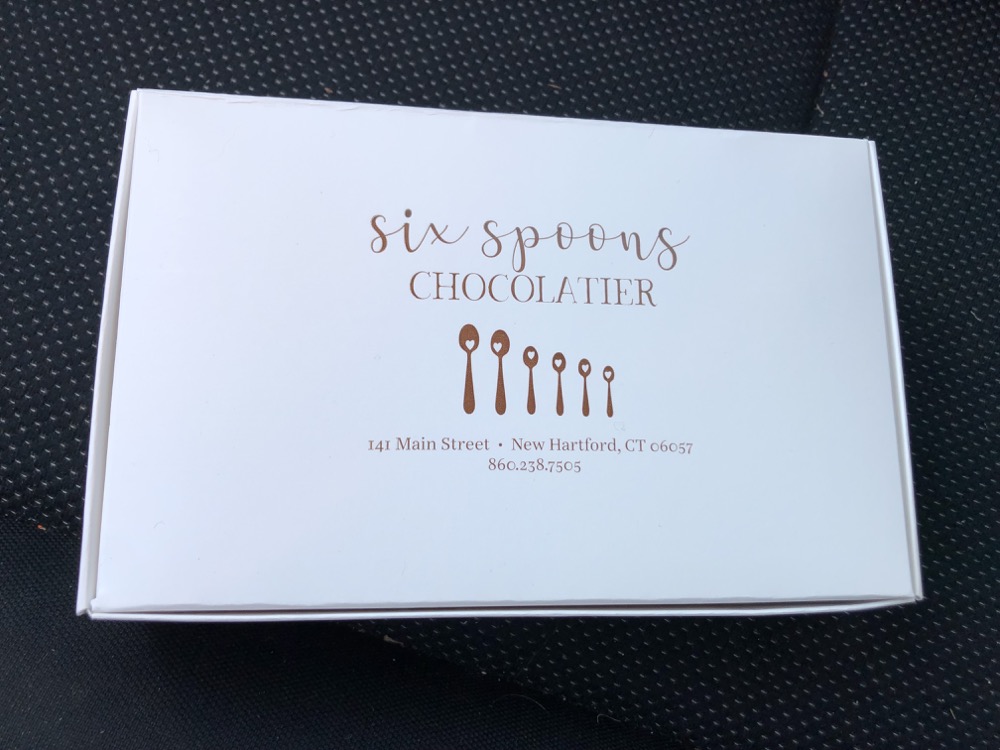