Parts of these trails have been closed and reopened since I wrote this page, due to property ownership issues. I hope they always stay open because they are fun trails – but be sure to check the CFPA site.

A month prior to this solo hike, my friend Rob and I took in a bunch of the other Southington regional Tunxis Trails which resulted in a write-up called, Some nICE Surprises. After finishing the writing, I realized that the coolest part of our hike that day wasn’t included – the southern end of the Compounce Ridge Trail. And, ironically, it was that part of that trail that contained the “nICEst surprises” – go figure. 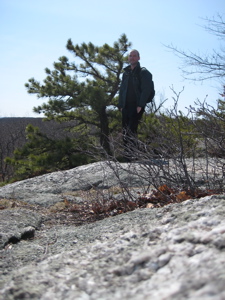 Rest assured, it will all make sense after you read this report. Maybe.

I was very happy to get out on a sunny and calm day to finish up the Southington region of the Tunxis. This would mean I could definitively put away my maps of this area and move on to the even-more-confusing (and more interesting) Burlington section. That’s not to say that this section isn’t interesting – far from it. First of all, as I continue to learn through these hikes, there are lots of cool places in central Connecticut very close to population centers that the tens of thousands of people who live in those population centers are unaware of. Here I was, once again, traipsing through Bristol (Bristol!) soaking in some of the best views in the whole state. 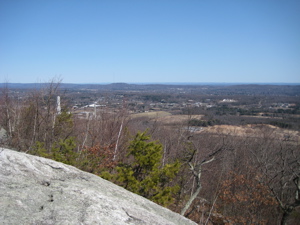 I’m not joking; Continue reading and I’ll prove it.

If you are ever in a situation where you must decide between the southernmost 4 miles of the Tunxis Mainline trail or the 4.6 miles of the adjacent Compounce Ridge Trail, do not go with the allure of “Tunxis!” Instead, opt for the far better Compounce Ridge Trail. (Of course, that decision is purely hypothetical as both end in the middle of the woods and don’t loop back, but you get my point.) This trail is relatively great as far as Central Connecticut trails go. 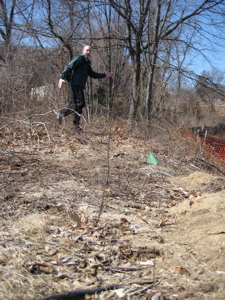 I split my hike of it over two separate loop hikes, which is why there is significant snow and ice in some of the pictures – it’s not like the altitude gain is 4000-feet here.

I began my trek from the northern terminus which is somewhat difficult to find. There apparently used to be a nice little parking lot right off of Lake Avenue/Sunnydale Avenue right off of Route 229 in Bristol. This is a high traffic area with gas stations and box stores. Plenty of parking is available – but the trick is, finding the trail head. A commenter noted that you can park at the Aldi or the commuter lot though. 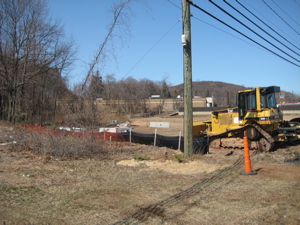 I drove around and up Mountain Road and parked at some empty storage facility about an eighth of a mile from the trail’s start. In hindsight, I’d have parked across Lake Avenue in the lot for the war memorial park or whatever it is. At any rate, the first several yards of the trail are somewhat comical – the construction and new housing development has played havoc with this little stretch, but in a valiant effort to preserve it, blazes are blazed through the 9 feet of “forest” that still exists. I would enjoy watching some of our more well-fed hiking friends navigate the first 30 feet, as there are some squeezes that I barely fit though. Ah, woodland hiking in urban Connecticut at its best! 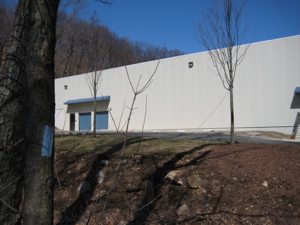 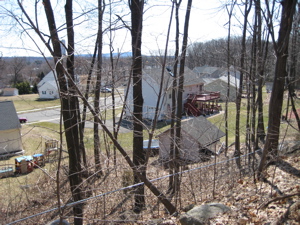 After navigating this quickly disappearing little copse, the trail turns left and skirts the backyards of suburban houses. A sharp turn right, across a power line scar, up some stone steps, a jog left (south) and I was finally in some real woods. Of course, these woods were chock-full of old forest roads and ATV trails, but woods nonetheless. 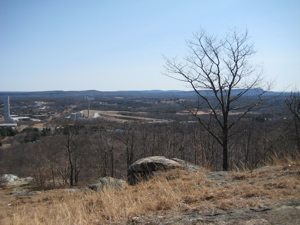 I must admit, this 3/4 mile stretch below Castle Rock is the first time on the Tunxis where the trail was not blazed/cleared perfectly. In one spot, it was totally overgrown with some pricker bushes and in another, I wasn’t comfortable that I was actually on the right trail – but perhaps on an ATV trail instead. I’m sure this will be taken care of this spring, however.

Right after my first overlook of the day (where locals seem to enjoy cheap beer and campfires) I had the good fortune of passing two more rusted out cars. Here are the two rotted jalopies: 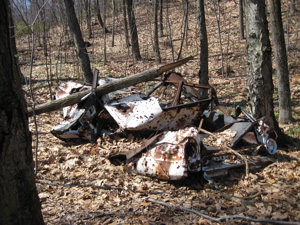 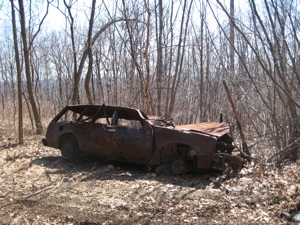 I’m not sure they’ll be cleared out in the spring.

The trail followed some old roads – one of which is Emerson Road, the pre-revolutionary stagecoach route between Bristol and Waterbury. You can tell it’s an old road because it contours so well – that is, no elevation gain or loss as it skirts the unnamed hill. Eventually, after crossing a stream, the trail turns sharply left and begins to head fairly steeply downhill. I think the trail also used to go through here: 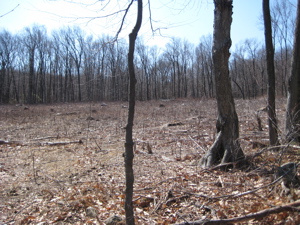 This trail is wonderful. When one hikes it, one feels as though he is hiking a “real” trail up a New England granite mountain. Perhaps this is simply because the trail doesn’t namby pamby up the hill (the “hill” being the 964 foot Compounce Mountain) but rather just charges right up. 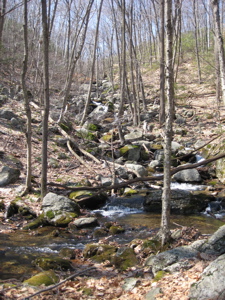 Right up the Cusgutter Brook – so why name it Compounce Cascade for the trail? I have no idea, but it’s a fun, sort of tough (though short) hike. Here, at the dawn of Spring, the last vestiges of winter clung to the undersides of mossy rocks and in shaded pools. I imagine this trail is nothing short of impossible during spring snow melts. (And, regardless, you’ll want to ascend this trail rather than descend.) 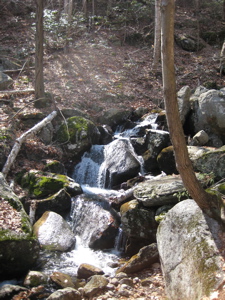 According to the guidebook, there are cool names associated with this trail. There’s “The Chute” where the stream drops more than 300 feet in a series of cascades. And a canyon called “Purgatory.” And of course, the “final climb” described in the next paragraph is “Suicide Slope.” 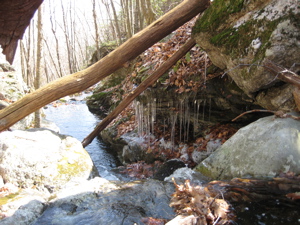 (One wonders… if the top of this climb is heavenly, and halfway up is Purgatory… does that make Bristol below, ahem, hell? Hm…) 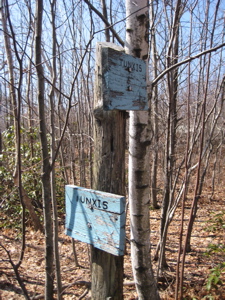 Now it’s getting good. On top of the ridge line now, I started hitting the views I’ve been alluding to. Immediately south of the end of the Cascade Trail, I got to Julian’s Rock. Awesome.

With a lone pitch pine keeping me company, I soaked in the view… and it’s a very unique view. To the left (north) I could see Mt. Tom near Northampton, MA and then, following the ridge line south: Mt. Westfield and Talcott Mountain, Rattlesnake straight ahead and the Hanging Hills in Meriden off to my right a bit. Further south, there was good ol’ Sleeping Giant again and the faint shimmer of Long Island Sound. 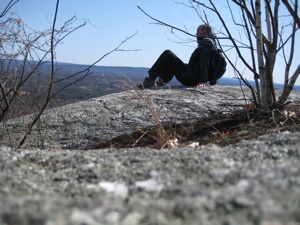 What is really cool about this view is that the tallest buildings of Hartford are visible just over the Metacomet range. It really is one of the better views east of Litchfield County.

After eating a snack, I continued south a bit and reached the intersection with the Bobcat Trail at “The Gateway.” On this day, I went left to finish off the last piece of the Bobcat (described in my Southington Region South report), and rejoined the Ridge Trail before finally finishing out my day along the bottom section of the Cascade Trail. 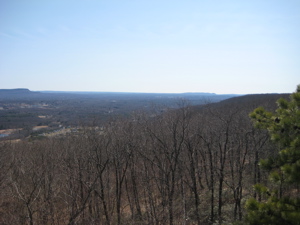 Unfortunately, the last (which is actually middle) section of the Ridge trail stinks. It’s just a rutted forest road with really nothing exciting to report. Actually, that’s not true. The short section from Julian’s Rock includes a 42% slope – the steepest on all the Southern Tunxis. But it’s not like that’s fun or anything.

Starting from “The Gateway,” I will pick up the Ridge trail from my previous hike with Rob. Note: It’s winter again. Brrr.

After the intersection with the other trails, the hike doubles back and ascends very steeply up to another knoll top. As this was the first time Rob or I had been here, we weren’t expecting too much. We thanked ourselves for having crampons on and crunched up to the top. Wow. 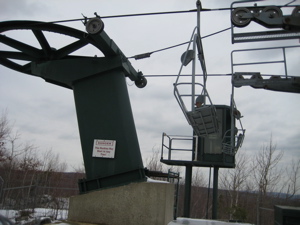 We were both floored at the views before us (same as described above). Although I’m sure not many hikers make the trek up to here, thousands of people did get to enjoy the same views – via the gondola ride from Lake Compounce Amusement Park down below. Unfortunately, that ride was closed in 2017. 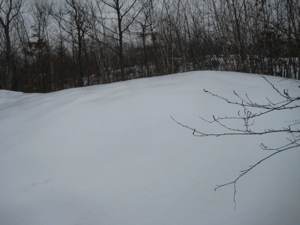 This is actually a very steep stretch of pure ice, which took us to… 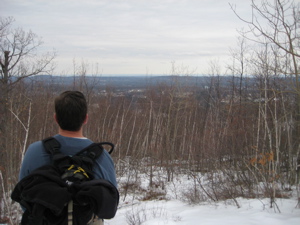 here, which afforded us this view of Hartford: 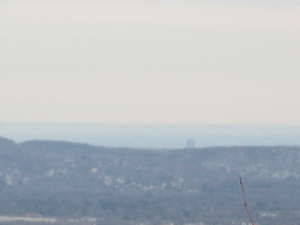 Also here is the named Norton’s Overlook. After which, some sadistic nut decided to route the trail straight down a cliff. Perhaps it’s easier without all the snow and ice, but not by much. In all my hiking from Georgia to Maine, this 30 foot section of this trail was one of the craziest. 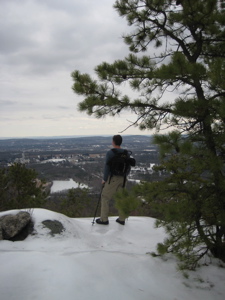 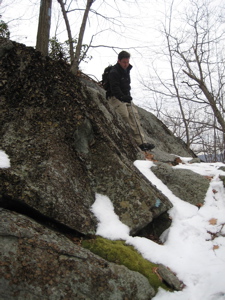 This was also be one of the rare times where I felt in slight peril on a trail in Connecticut, not including highway crossings. Anyway, we survived to see Compounce Overlook (same view, but nowhere near as nice) and to do the unnecessary ups and downs the trail takes on its way down to the intersection with the Steep Climb Trail – also described in my other write up.

The last half mile ascends fairly steeply to rejoin the Tunxis Mainline Trail at the summit of Libby’s Lump – but not before going over Madsen’s Mound! No, I’m not making any of this stuff up. (A commenter below gives some history and derivation of some names up here.) 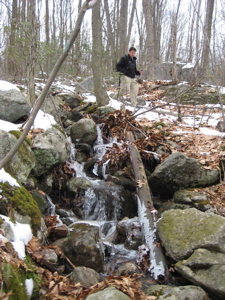 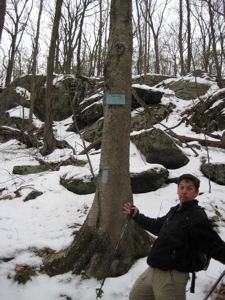 After circling back north on the Ridge trail I arrived back at the spot where I originally went up the Cascade trail. Now I headed down (east) the mountain to end my day of woodland hiking. All in all, the trail is not too exciting here – so why separate this section out? 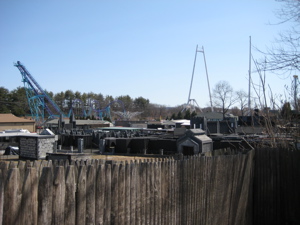 Simple: Because it skirts the amusement park property and goes right next to the graveyard of dead rides! Amazingly, I think I could have walked right into the park from this out-of-the-way back route with no trouble at all. (I didn’t try.) It was fun to check out all the broken junk back there – I highly recommend it. 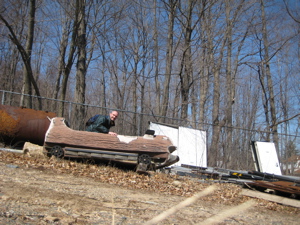 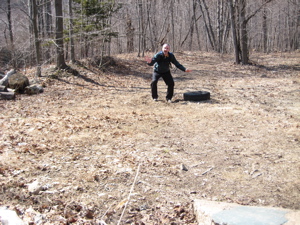 After that bit of unexpected fun, I hit the end along Lake Avenue and began my trek north the nearly two miles back up to my car. It’s not a bad walk for the most part; my only regret was that this store was closed: 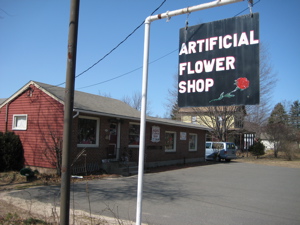 I was really looking forward to buying Hoang a nice plastic bouquet. Ah, only in Bristol.