After a long and full day of CTMQ’ing with my friend Rob C, I dropped him off at the train station and set out to find one last item of interest in Stamford: The Jackie Robinson Park of Fame. 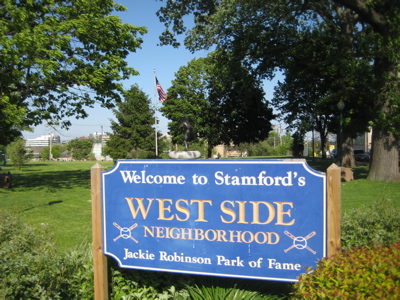 Stamford is a funny town; one of the few in CT with a mix of affluent and not-affluent. (Usually, the affluent live in a town adjacent to the less affluent, more urban areas.) To me, this makes Stamford pretty cool.

Anyway, a short drive south over to West Main Street from downtown takes one to the more ethnically diverse areas of Stamford. West Main Street is double-signed as Jackie Robinson Way here and took me right to the triangular and tiny little Jackie Robinson Park. And now that I’ve visited, artfully made sure no bums appear in my photos, and successfully explained to the burrito truck guy that I didn’t want a burrito, I’ve learned that Jackie lived in Stamford!

Prior to 1947, two separate baseball leagues in America pursued their dreams and, more regrettably, two distinct audiences for them flourished. When Jack Roosevelt Robinson stepped onto Ebbets Field in Brooklyn, New York, on Tuesday morning, April 15, 1947, he forever changed major league baseball and delivered a resounding lesson on race relations in America. Jackie’s heroism supported him through a whirlwind of controversy, allowing him to weather difficulties and maintain his course. 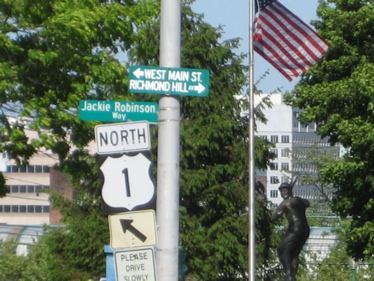 For more than 20 years, Jackie Robinson lived with his family in Stamford, demonstrating pride in his heritage. He represented tolerance, educational opportunity, and the confidence that inspires personal achievement and success. A life-size bronze statue of Jackie Robinson with an engraved base bearing the words “COURAGE,” “CONFIDENCE,” AND “PERSEVERANCE” stands in the park located on West Main Street, the gateway to downtown Stamford. The educational programming associated with the park serves as a gateway to the future of the nation’s youth.

The Jackie Robinson Park of Fame is dedicated to inspiring them with the vision of an American hero and a role model who also happened to be a legendary sports figure.

The Jackie Robinson Park of Fame, Phase Two, scheduled for Spring 2001, includes landscaping with trees (check), flower beds (check), and lighting (maybe); a decorative lit fountain spraying a cascade of water into the air (didn’t see that in 2010); benches commemorating role models and leaders of local and national prominence (nor these); and a Walk of Honor with commemorative bronze plaques in tribute to outstanding national role models and leaders (nor these). 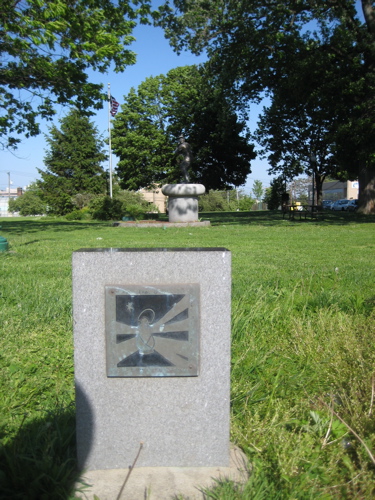 Jackie’s widow has a house in Salem too, right next to the wonderful Fox Farm Brewery. Figured you should know that.