Why did I ever begin documenting fishways and fish ladders and lifts? I honestly don’t remember. In my defense, a couple of them here and there act as sort of outdoor museums and have displays and open houses and stuff.

But that doesn’t explain why I went beyond them to list all of them around Connecticut in a fruitless attempt to “experience” them all. 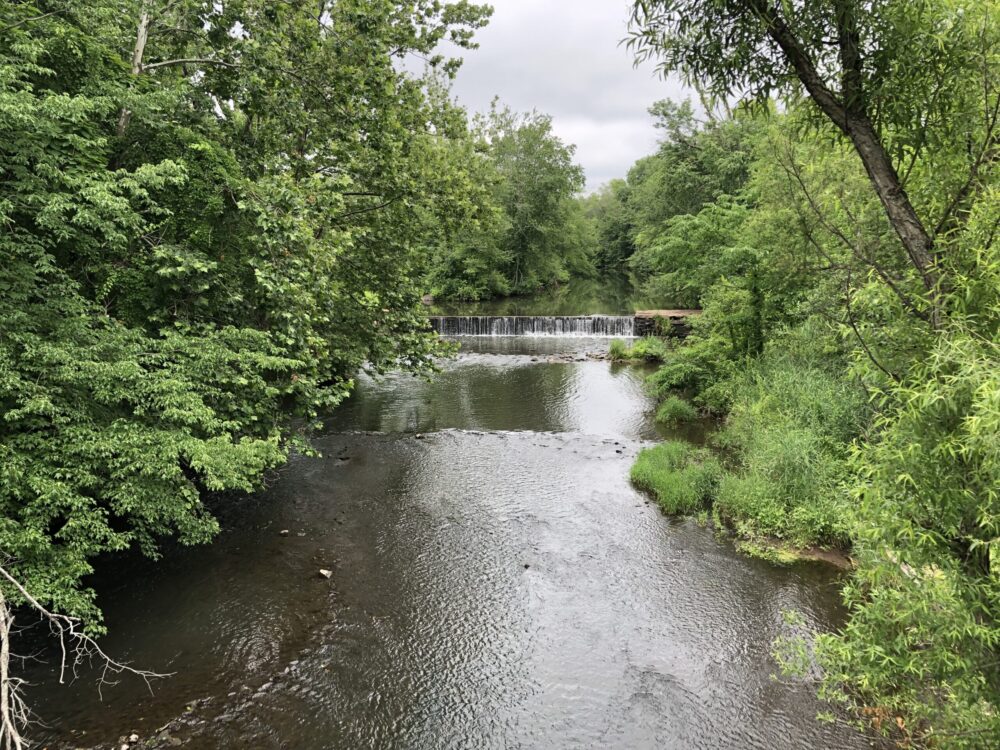 Yet here we are. You and me. Learning about a fishway located behind the locked gates of the StanChem Polymers in Berlin. StanChem Polymers is a water-based emulsion (latex) polymer supplier to the coatings, paints & adhesive industries. Sounds like an important, yet rather nasty, place to work.

Cynically, I’d think they’re on the fishway train to do something “environmentally responsible.” Lord knows what they’ve let into the Mattabesset River on their property over the years. 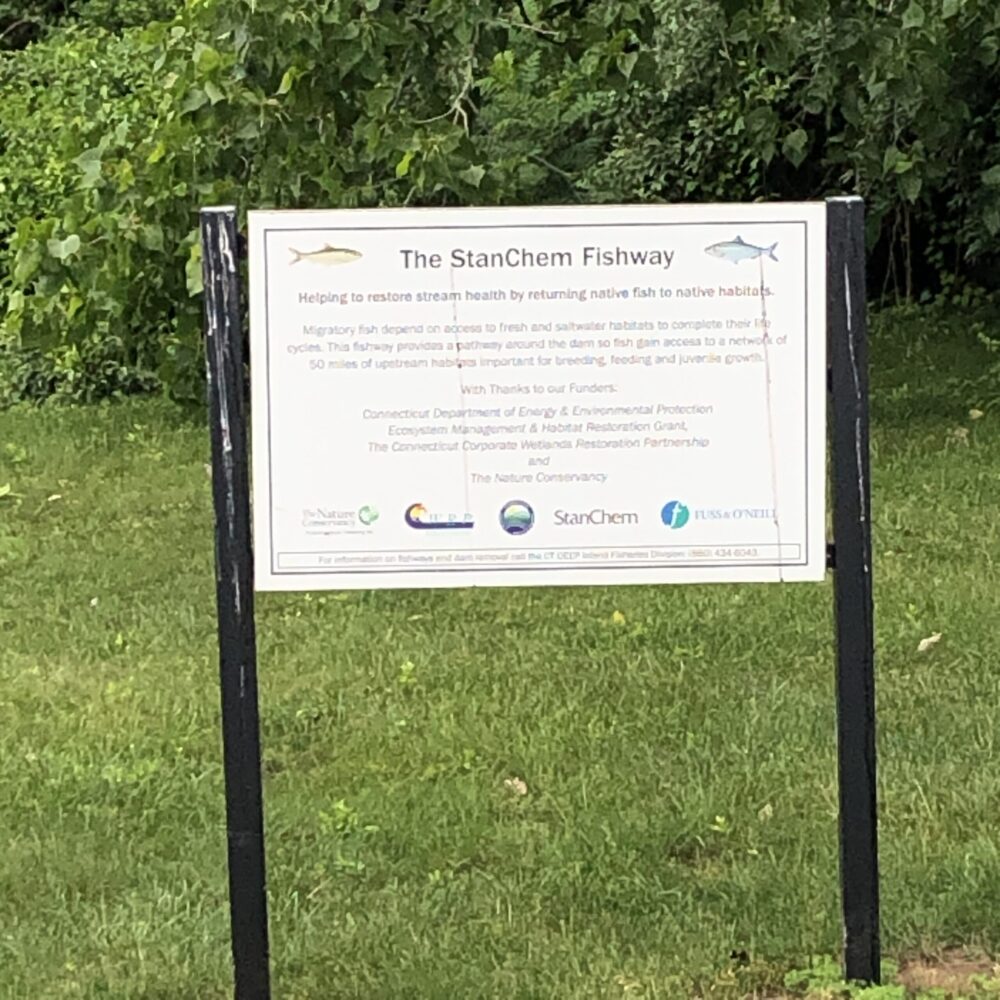 I tried to check out the fishway myself one day; first by attempting to drive into the facility. Yeah, that wasn’t going to work. It crossed my mind to reach out to StanChem’s media liaison and explain that I’m a guy who writes about museums and breweries and trails and fishways and I’d just like to stand next to the one on their property.

When I played that conversation out in my mind, I immediately realized how stupid that sounds so I then tried to see if I could access it by walking up the Mattabesset from the road. I mean, it’s right there: 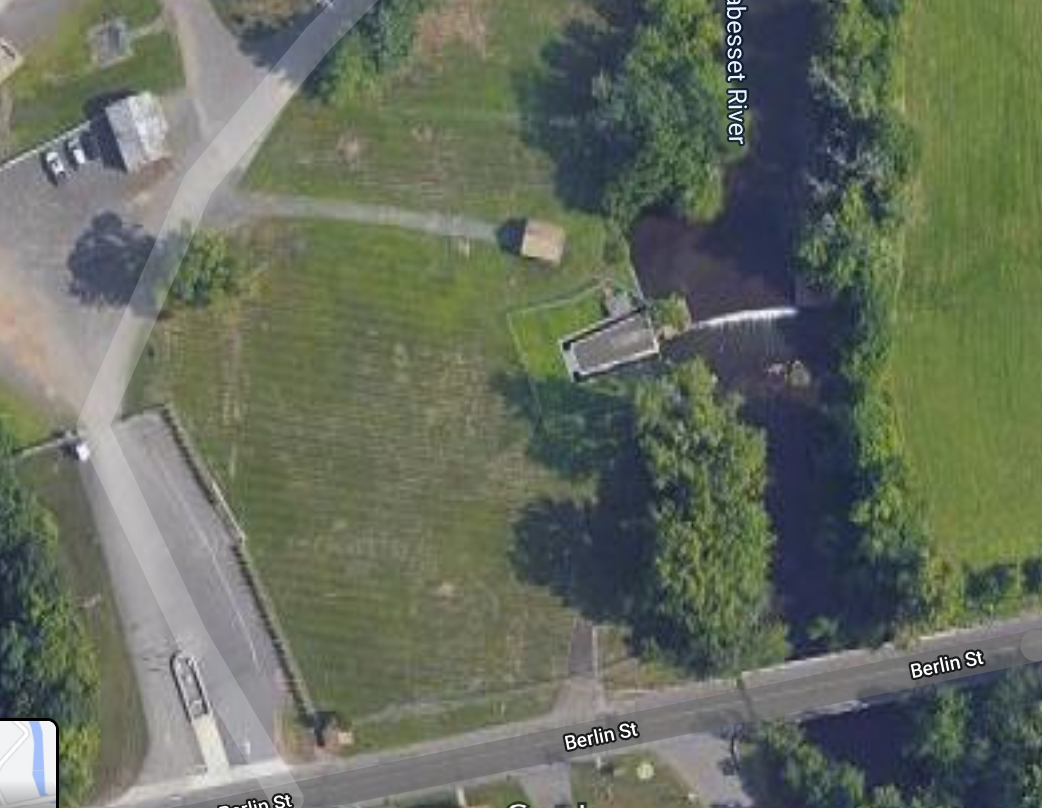 The property is fenced it, but if I was really adamant about standing next to the baffled fishway, I probably could have done so. Only to get yelled at by the security guard. Which would have been really dumb. It is, after all, just another fishway. (That you’re still reading about… weirdo.)

The fishway project was completed in 2013 in partnership with the Nature Conservancy, Connecticut DEEP, and the StanChem facility. They say that this is a great project for American shad, as it will restore their whole historic 16.5 mile habitat range in the Mattabesset. It should also be a boost to migrating alewife, blueback herring, and sea lamprey plus a host of other aquatic species. 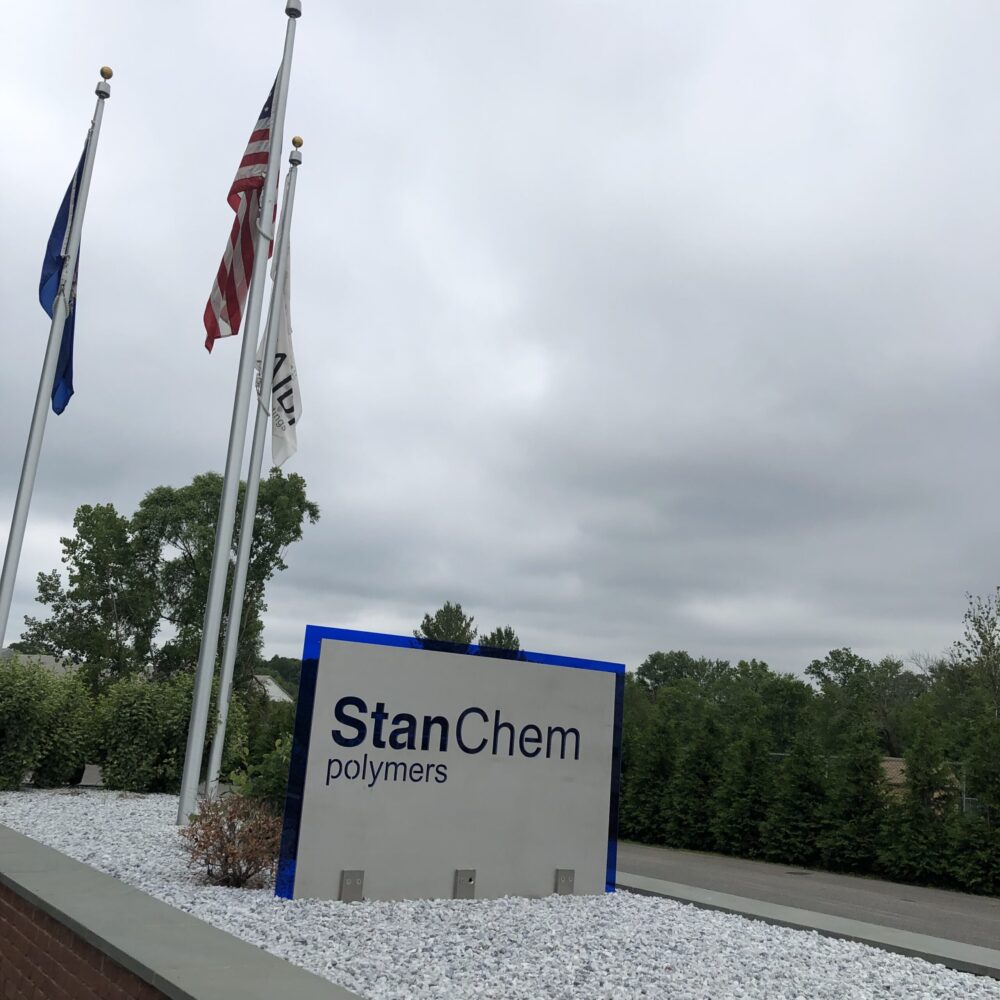 The dam here is the first dam on the Mattabesset River, coming upstream from the Connecticut River. StanChem says that for years, “workers at the chemical manufacturing plant watched fish pile up below the dam and wished they could do something about it.” I’ve no reason not to believe that, but the image of these chemical workers sadly staring down at “fish piling up” at the dam and organizing some effort to do something about it is a little Pollyanna to me.

I mean, fish face(d) another dam in the Kensington section of Berlin at Burnham Street. A 2019 project was to build a fish ladder and eel passageway there as well. Here’s a picture of the construction project from 2019. I’m not sure that’s gonna work as a fish ladder though. 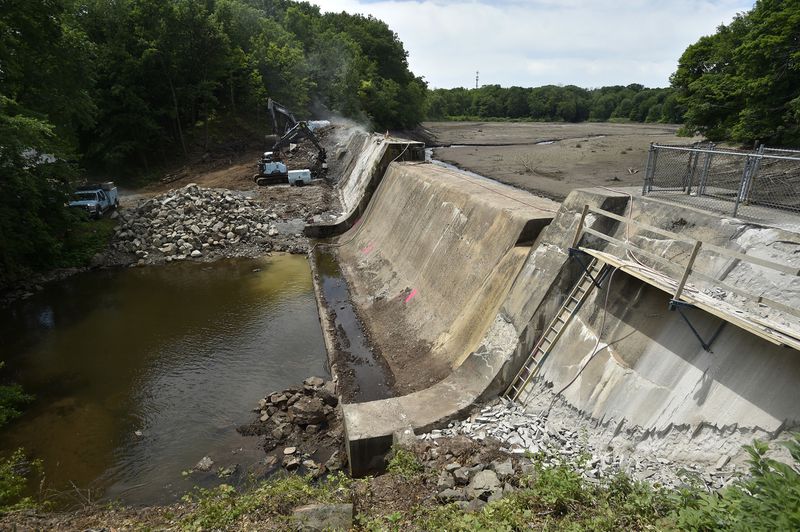 The StanChem fishway has an underground counting house where visitors can go down and watch fish swim past a viewing window. There is also an innovative buried eel pass here as well. Grrr, now I’m mad that I’ve not been to the viewing window!

Wooden baffles slow the rush of water to allow fish to ascend the upper section of the StanChem Fishway. At the top, the fish swim past a viewing window that I’ve not seen. 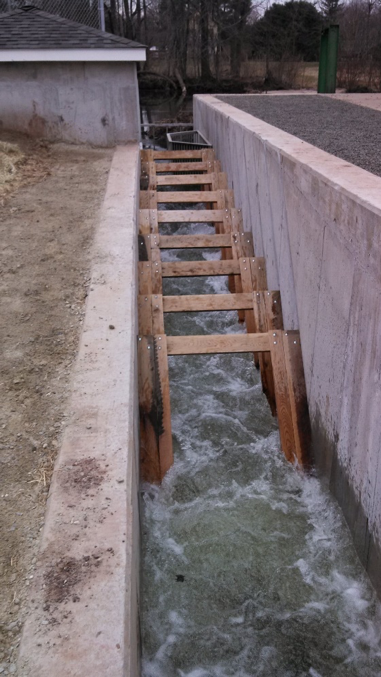 There is some disagreement over whether such rehabbed fish passages are worth it; like, do they even work for the larger species? A few years after the StanChem fishway was built, two American shad made it through. Two. But biologists say this was great, as that was two more than had ever made the journey in a century. (Hundreds more of other species successfully made it through, but the majority of them are suckers, bass, and other freshwater fish… not really the ones looking to spawn upstream like eels, shad, herring, lamprey, and salmon.)

It takes five to 10 years before any significant numbers start showing. We’re in 2022 now, so… I suppose I could search around DEEP data to validate the fishway’s success. 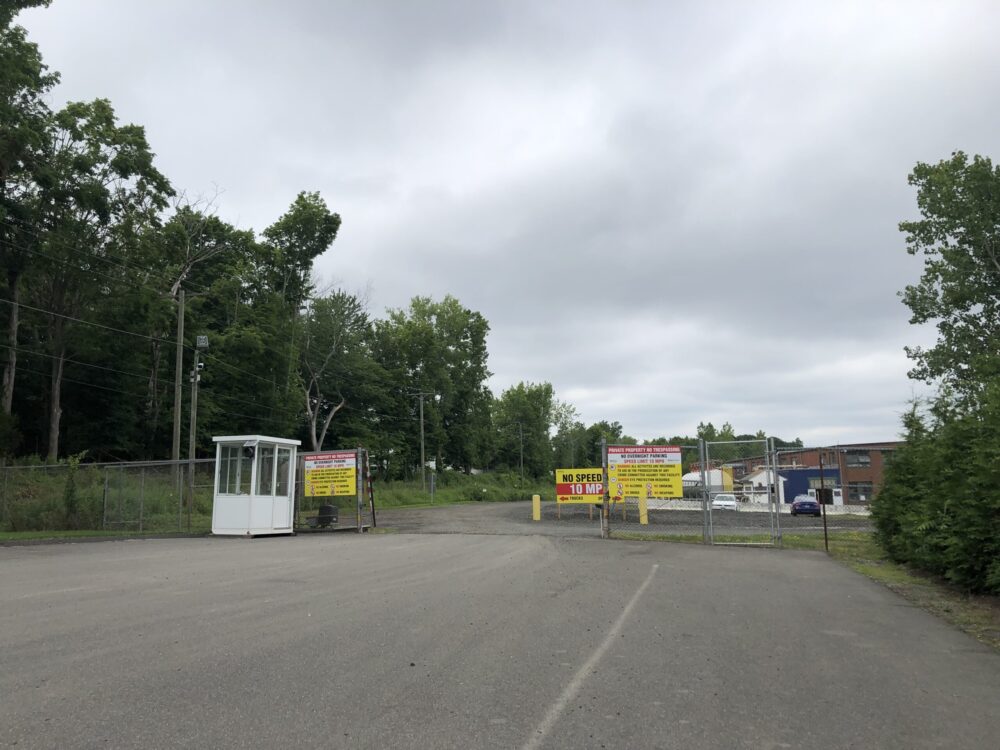 I just tried and hit too many 404’s to bother. I’m sure these fishways help, and of course I’d love nature to be restored, even somewhat artificially. But the earth is warming and the whole thing is going to fall apart in a couple centuries, so, you know, have a nice day. 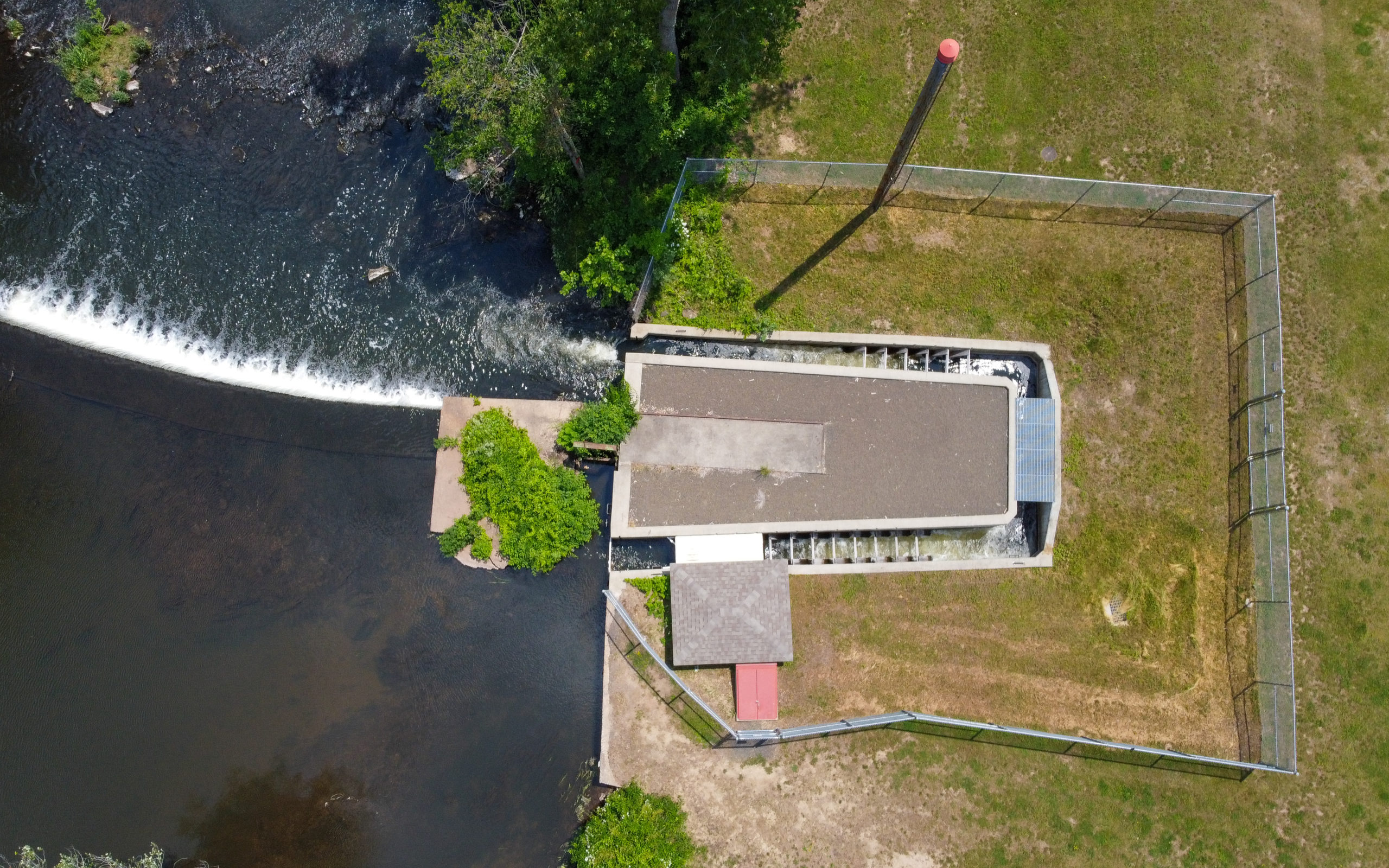