I’ve been to Stratton Brook a bunch of times, but only to take Damian sunning and swimming at the pond over there. Oh, and there’s one of the smallest nature center “museums” over there as well. 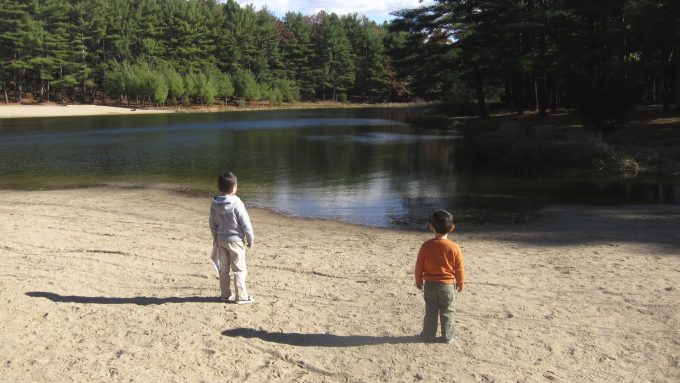 But this page is about the park in general and the hikes therein. So let’s start with the park talking about itself:

This 148-acre state park includes a pond and brook for fishing, a separate swimming pond, and a picnic shelter as well as trails for hiking and biking. The park was acquired in 1908 as part of Massacoe State Forest for the purpose of demonstrating forest fire control techniques in areas adjacent to railroad lines. The Town of Simsbury built the bike path on the former Central New England Railroad bed; it extends through Simsbury Town Forest Park to West Mountain Road. Massacoe Pond, the small fishing pond, resulted from a dam built by the Civilian Conservation Corps in 1933. Replete with a large numbers of white pines with mixed hardwoods, this park is a fine example of a sand plain forest. Spring brings wildflowers such as rue anemone, white and birdfoot violets, fringed polygala (gaywings), and lady slippers. Along the edges of the park’s open spaces are good spots to see a wide variety of warblers, brown thrashers, cedar waxwings, woodpeckers, and other interesting birds.

In 1949 it was designated as a state park and in 1996, this park became Connecticut’s first state park that is completely accessible by wheelchair. 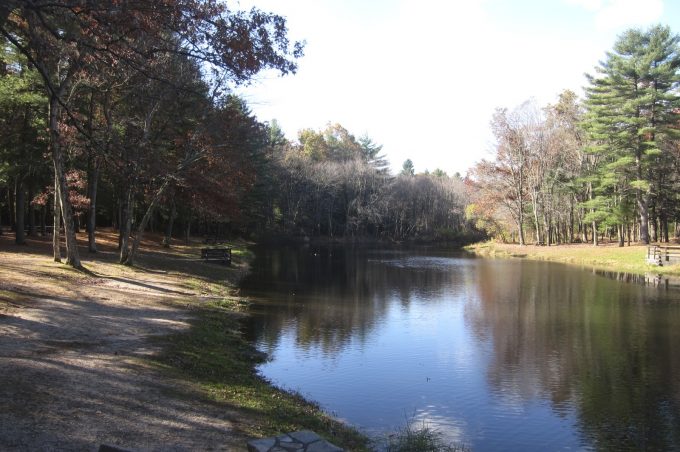 I’m not sure what “completely accessible” means, but there is a boardwalk to the beach and the aforementioned rail line trail could be wheelchaired for the most part I suppose. Regardless, as a parent of an intellectually disabled child, I applaud any and all accessibility efforts made.

Speaking of that child, this trip over to Stratton Brook was the second hike that I took Damian with his little brother, Calvin. He’s closer to 8 than 7, but it took his 2 year old brother to sort of prod him along (and do goofy dances along the way) to get Damian to keep moving. 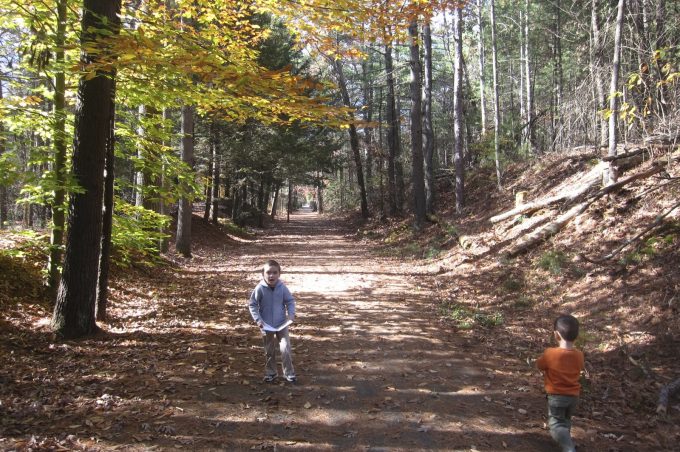 Here’s Calvin yelling at Damian for the 400th time, “Hurry up, D!

For me, this has been a revelation. I’ve absolutely loved it. I won’t dwell on it too much, but getting Damian outside and doing something active like this – without too much “behavior” – has made my year.

So.. Stratton Brook. Since there is no completist patch or shirt from Connecticut State Parks, I felt no need to walk every inch. Although, over the years I probably will. 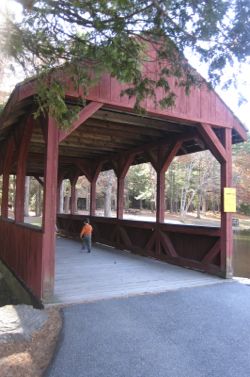 Stratton Brook is, of course, a state park. Certainly not the biggest one around, but it pretty much has it all. Decent hikes, swimming, nature center, fishing, mountain biking, and a fairly interesting history – the whole trains burning down forests and their regeneration studies thing, which was spearheaded by James Goodwin who is responsible for Massacoe/Great Pond State Forest among other cool place in the state – makes this place fun. 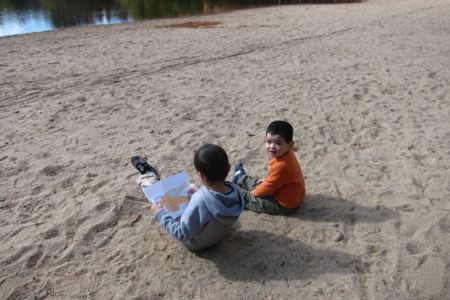 I sort of let the boys choose our path. I want them to feel empowered and like to give them choices. Their first choice was to dash like mad from the car to the beach and the pond. Once there, I think they both realized, “Hey, it’s only 58 degrees or so and no one is swimming but ducks.” 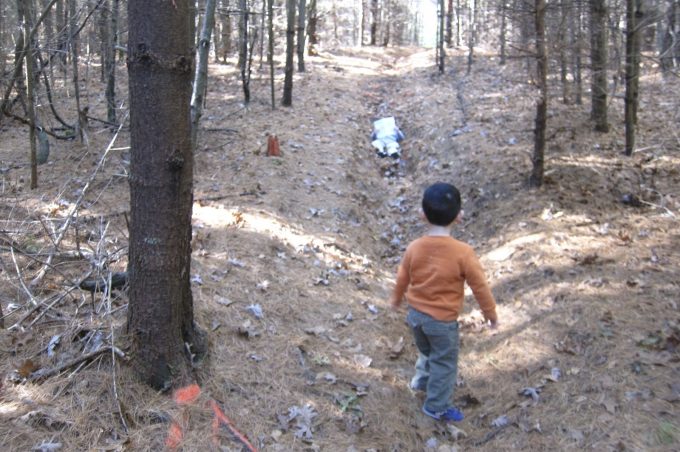 No matter, there was a covered bridge to go explore and beyond that, trails! Three different trails head off from the bridge and cabin and I’m guessing the green trail is the most gradual, only because a family of grandparents and a toddler beat us up to the top of the hill via that longer path. We chose the old woods road (unblazed) up the hill.

It became apparent to me that these trails are used for cross-country meets (Simsbury high school abuts the park) and the xc people use their own garish fluorescent orange spray paint to mark their courses. 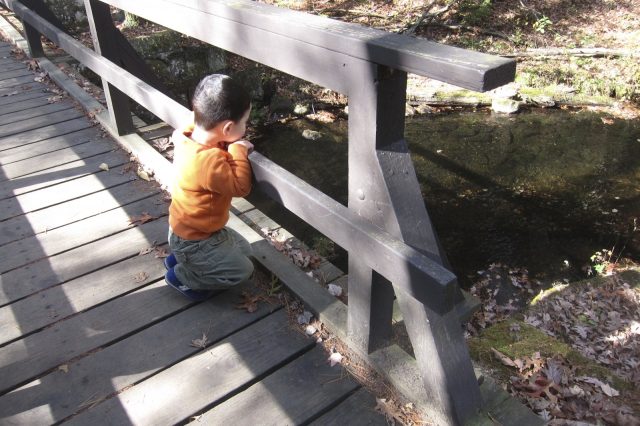 I found it distracting and ugly, but Damian rather enjoyed it. Pro Tip: When hiking with Damian, assuming you get him out there, you MUST supply him with a map and the trails should be blazed. He takes great joy in calling out each blaze and even greater joy pretending to read the map. In fact, for weeks after places with maps (zoos, nature centers, etc.) he’ll keep them next to his bed to look at in the mornings. As a map-geek I love this. As a realist who knows he can’t really make the map-real world connections, I find it pretty strange.) 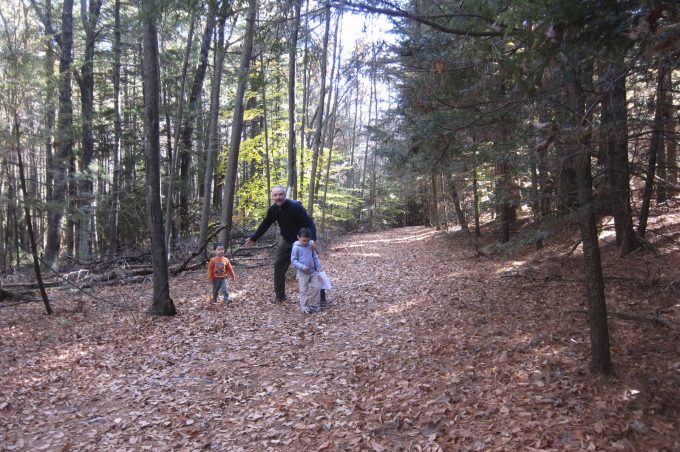 The trails here don’t have names other than their blaze color. We took the light green trail north past some nearby houses to its intersection with the white and pink trails. Here, I gave the boys another choice and they agreed on pink.

Around this time Damian started whining for home. He lasted maybe 25 minutes today! A new record!

The pink trail heads straight up a hill and straight down the other side. Fortunately, this is through a pine grove so on the steep way down, each fall was cushioned a bit. And, of course, once Calvin got a reaction from a real fall, he proceeded to repeatedly fall on his butt all the way down the hill.

Damian loved it and did the same. At one point, Damian realized it was quite comfortable to sit on soft pine straw and just decided to sort of zone out. I sat Calvin down for a drink. It was a nice moment… 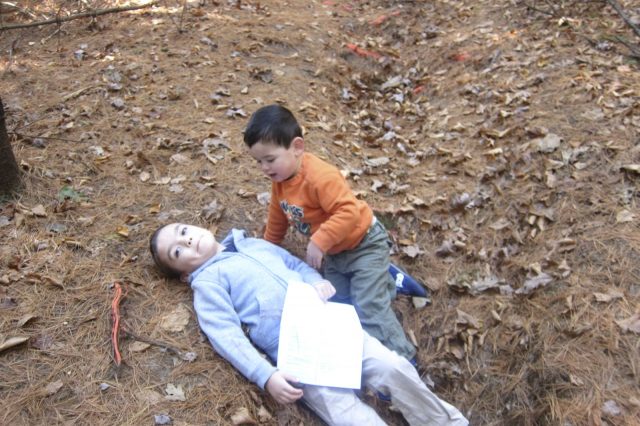 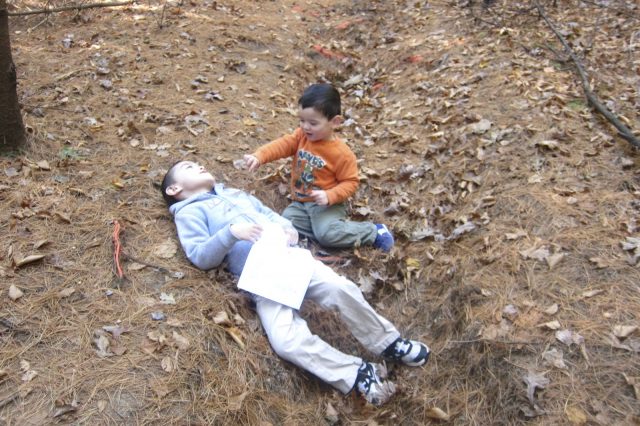 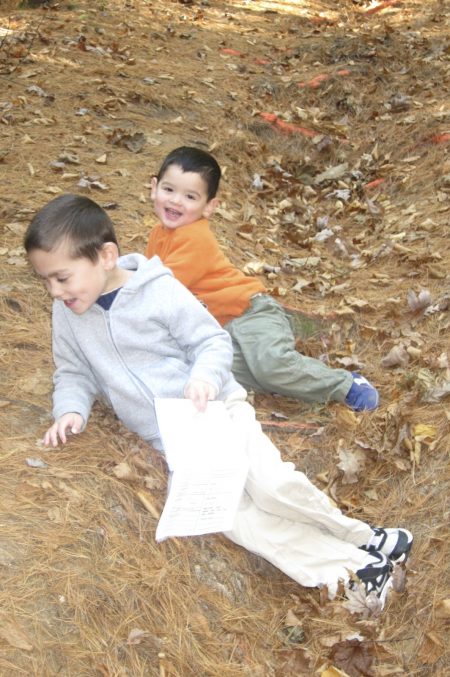 Until Calvin decided the cure for Damian’s lethargy was a sprinkling of pine needles. And what do you know! It did the trick.

We continued to the bottom of the hill and then around the short but interesting dark green trail. I’d guess this is the least traveled spur trail here, which may be why I liked it. That – and check out this cool picture: 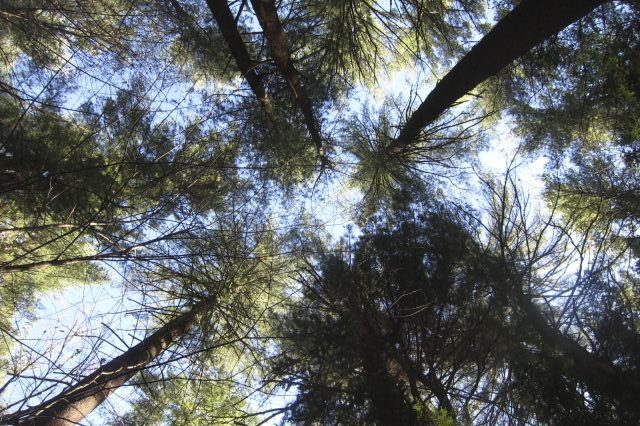 I love pictures like that. Especially good ones from real photographers (read: not me). The trail included a few blowdowns that Calvin loved navigating. “No help me Papa! Go Away!” he says. (Damian, on the other hand, takes all the help he can get.)

Once back on the more traveled white trail, some guy walked by us and said hello. As per usual, my boys just stared at him in silence. Then once out of earshot, they start yapping again.

We shortly came to the linear trail; you know, the rails to trails thing, and the boys decided to take it straight to the car. There are a couple trails that head northwest over to the Ensign Memorial Forest and then a few more (red, orange, and yellow) that go through the woods a bit more back to our starting point. 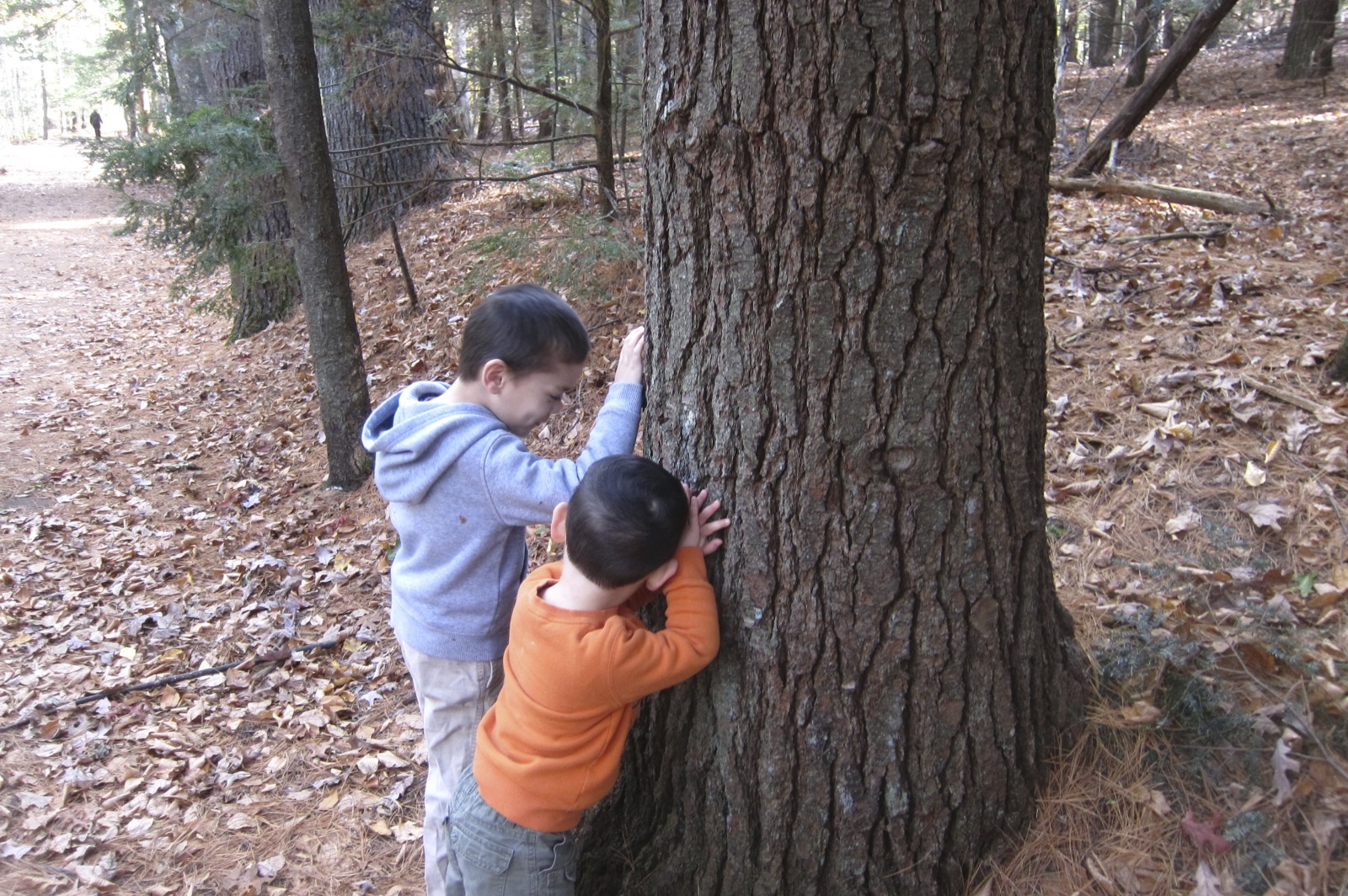 Oh so… so tired

But I was content to take the linear path. It’s still quite nice and we got to pass a bunch of nice people out for Sunday walks.

Of course, Calvin being Calvin, he opted to make this flat and straight portion of our day a bit more “exciting.” 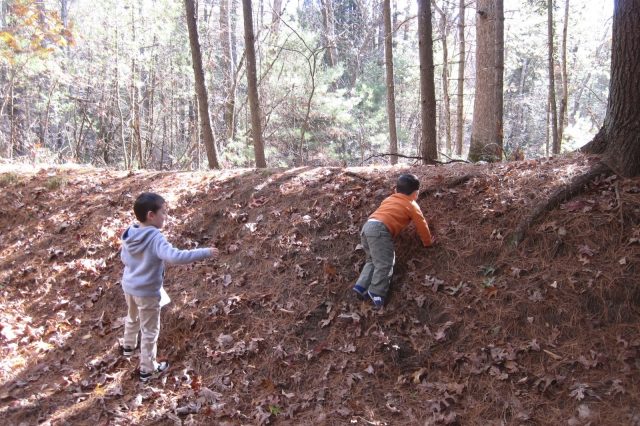