When I posted my page about the USS Nautilus being a National Historic Landmark, someone told me that there was nothing to celebrate about nuclear submarines. It was likely a throwaway comment for that person, but it stuck with me for quite a while. 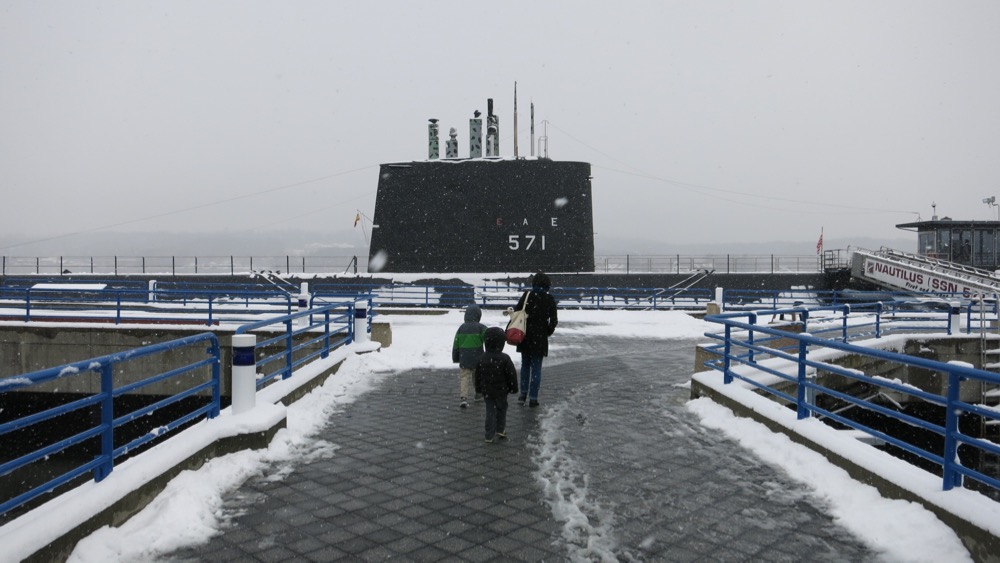 I don’t know if his aversion to the Nautilus was simply because “nuclear equals bad” or because “machines of war are bad” or a combination of the two. For my part, which no one asked for, I agree that machines of war are bad and war is very bad. I am a proponent of nuclear energy and a big proponent of engineering and invention. The world’s first nuclear submarine ticks a lot of those boxes. It’s a tough one.

Regardless on your personal feelings towards such things, the Submarine Force Library and Museum in Groton is still worth your visit. Though since it’s run by the Naval History & Heritage Command division of the Navy and is located on the Naval SUBASE, I wouldn’t suggest that you bring your vocal protest to its front door. 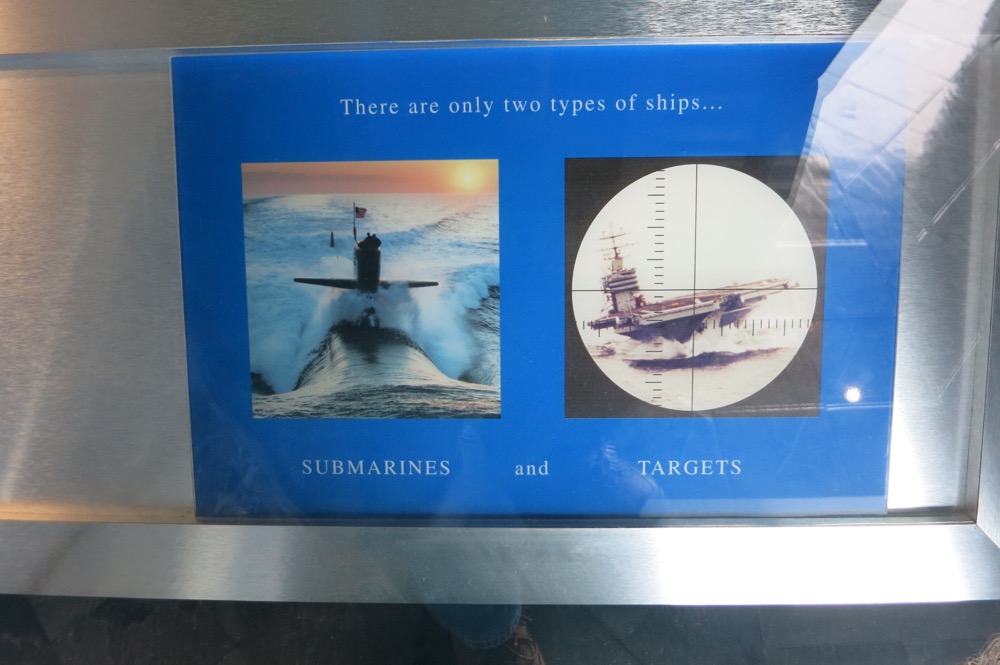 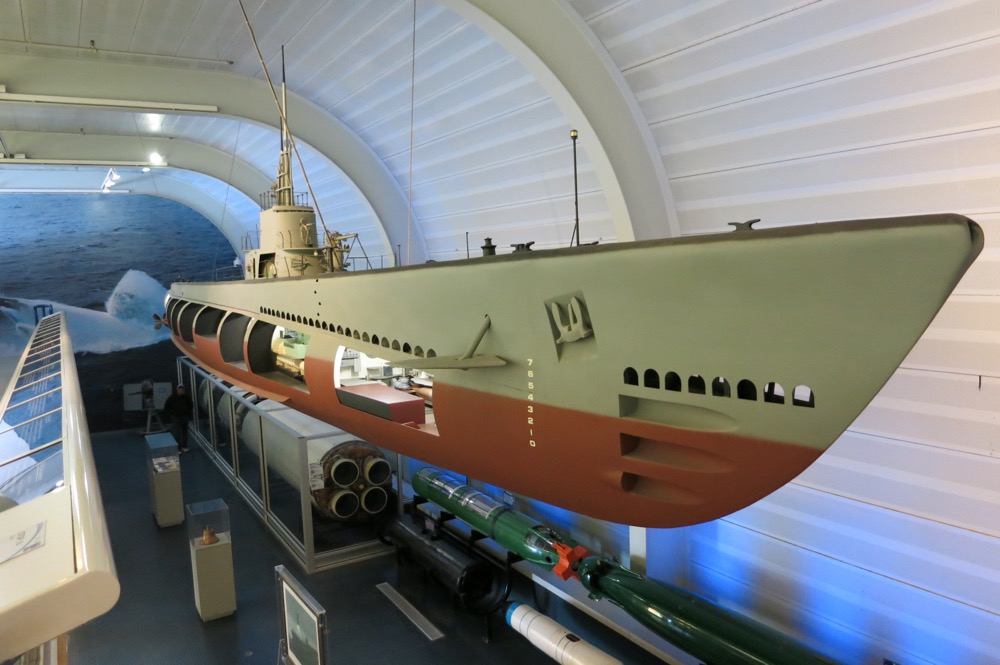 Yes, The United States Navy Submarine Force Library and Museum is located on the Thames River and this makes it a repository for many special submarine items of national significance, including the aforementioned USS Nautilus, which you can tour on your own.

I was mildly surprised that this place has been around for a really long time – at least in some form. The Electric Boat Company established the museum in 1955 as the Submarine Library. Why didn’t they just call it the Submarine Museum? That dumb decision haunts me to this very day. 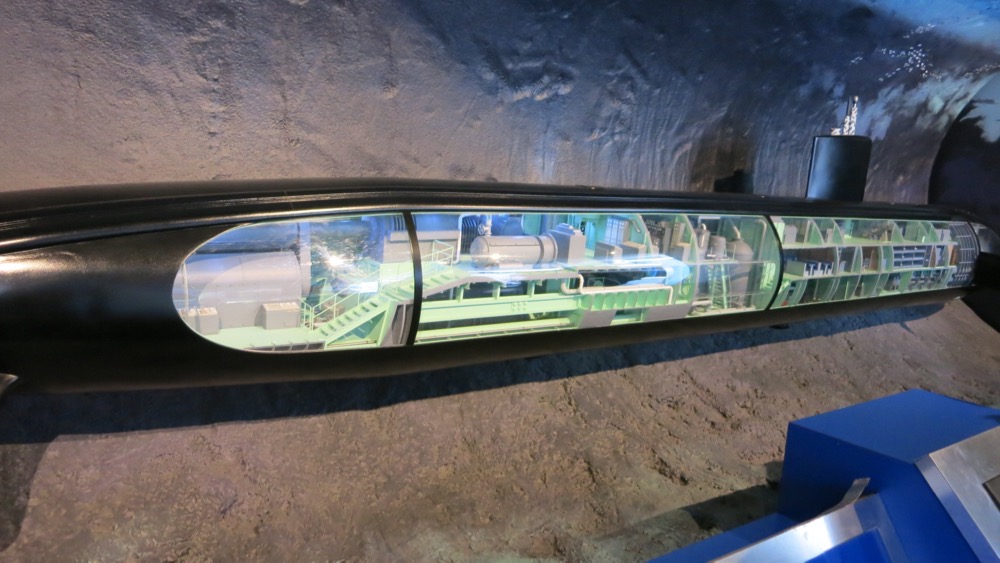 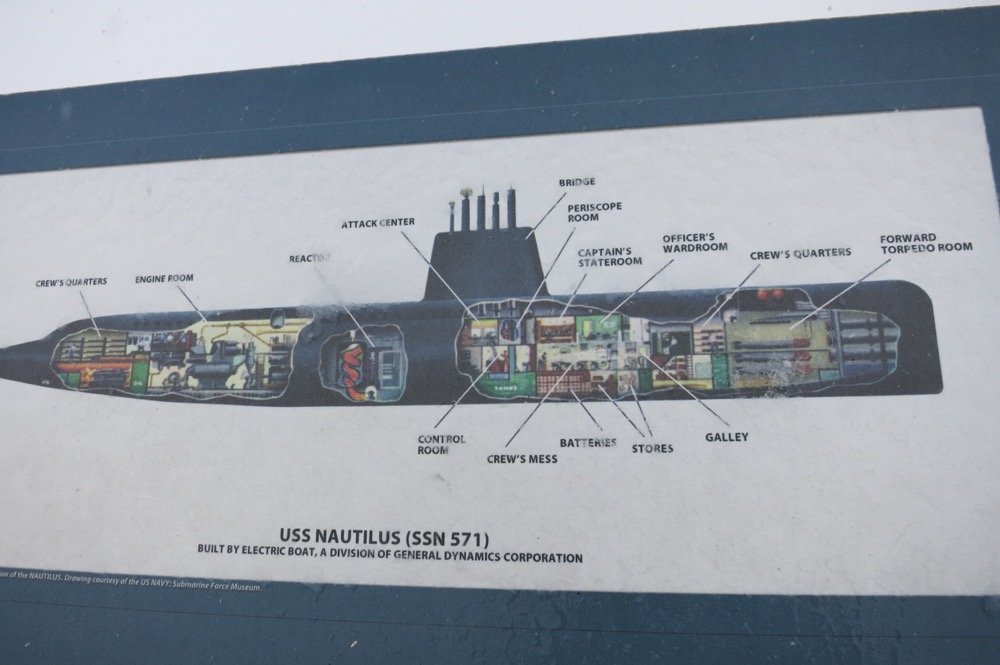 (Because it started as an archival library, that’s why.)

Anyway, Electric Boat donated it to the Navy in 1964, and the Navy moved it to its current location next to Naval Submarine Base New London. It received its official title that we all hate in 1969. Over the next few decades it raised money for a proper museum improvement and expansion, finally opening its current form in 2000 – “in conjunction with the Centennial Celebration of the United States Submarine Force”, according to the museum.

As you can see, a little snow doesn’t keep the CTMQ family away from a good submarine museum. (I only mention this because snow would be an issue at, like, five museums in the state. This is one, as navigating the metal fuselage of the top of the submarine was quite dicey.) 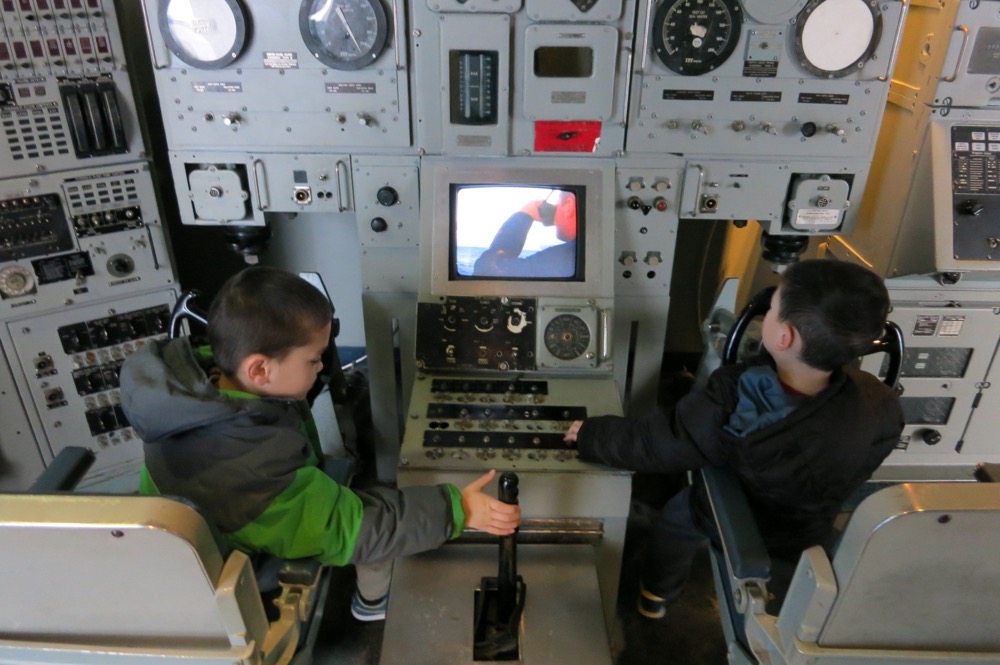 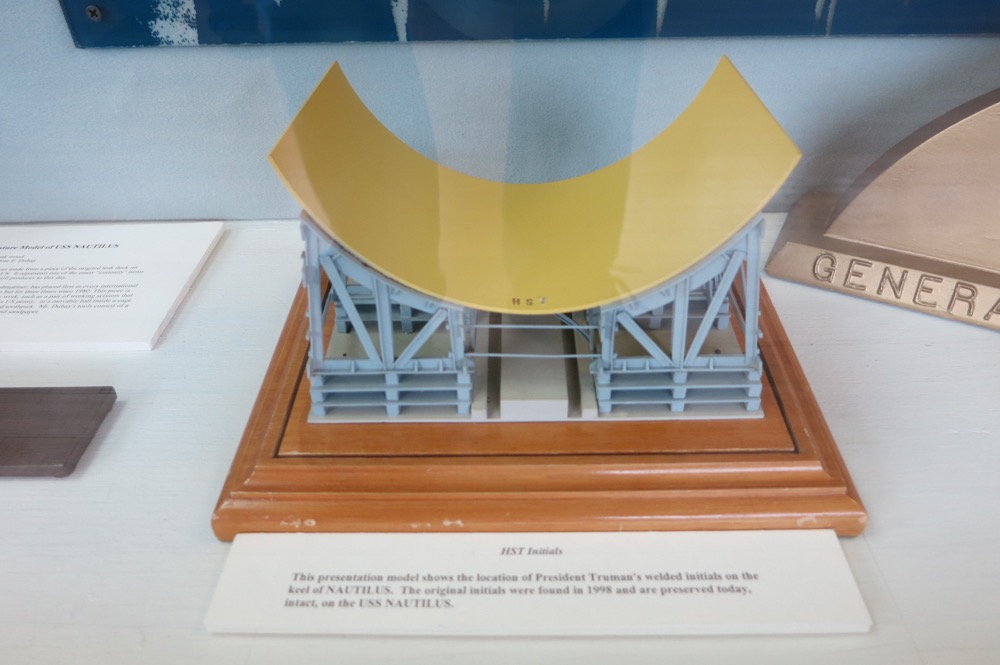 Who knew? Submarines have skateparks*

*This is not true.

But before we ventured down to the Thames and into the Nautilus, we checked out the rest of the museum. After 70 years of collecting stuff, there’s a lot here – but most of it is in archives somewhere, as the museum is organized, easy to navigate, and well-presented.

The history of submarine combat begins in Connecticut. As all Nutmeggers know, David Bushnell’s Turtle, built in 1775, was the first submarine used in combat. My man pedaled his craft out into the Sound and tried to blow up a British ship. He failed in his mission, but at least lived to tell about it. 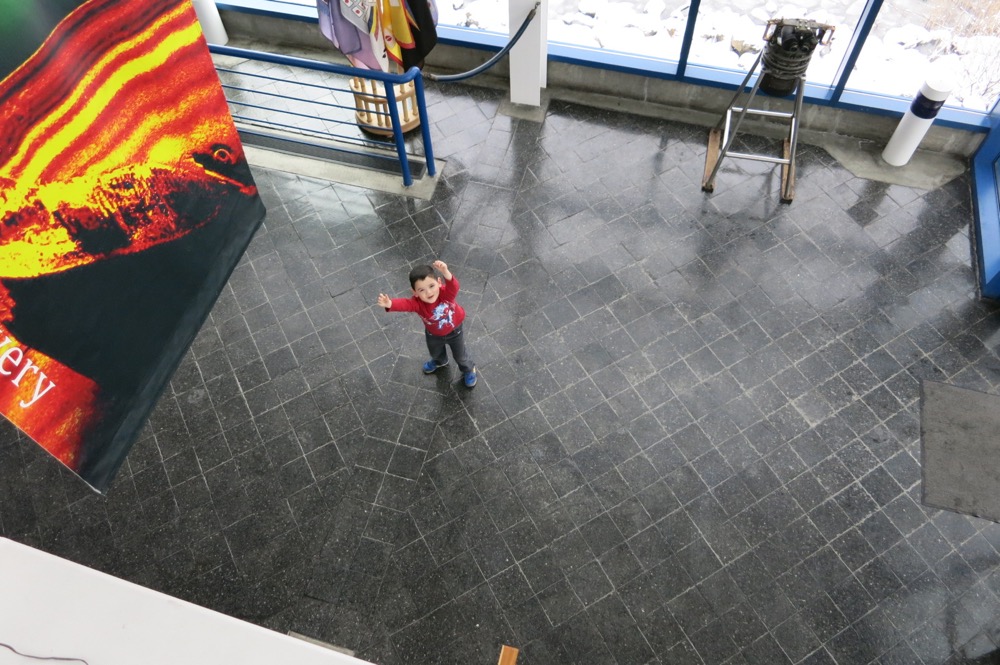 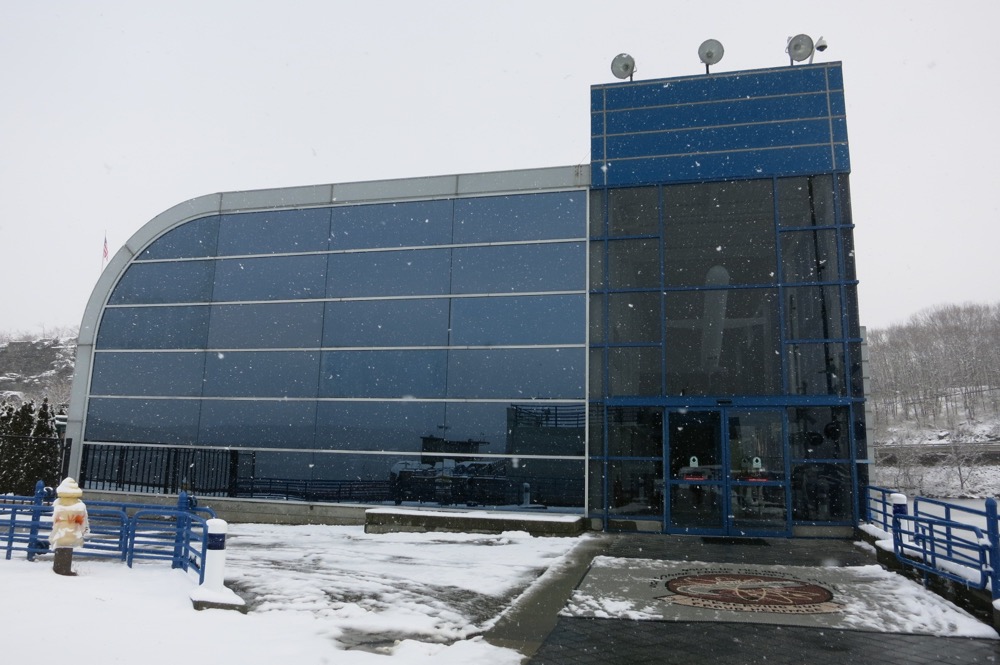 Other exhibits include midget submarines from World War II, working periscopes, salvaged parts from other nuclear subs, a submarine control room, models of submarines, and the Explorer, an early research submarine. The sail section from the USS George Washington, the first nuclear powered ballistic missile sub, is on outdoor display near the main entrance.

I guess it’s not surprising that this place bills itself as the “world’s finest collection of submarine artifacts” since the world’s finest submarine force runs the dang thing. It is the national repository with the responsibility to archive and display US Submarine history. I think they’ve done a pretty good job. 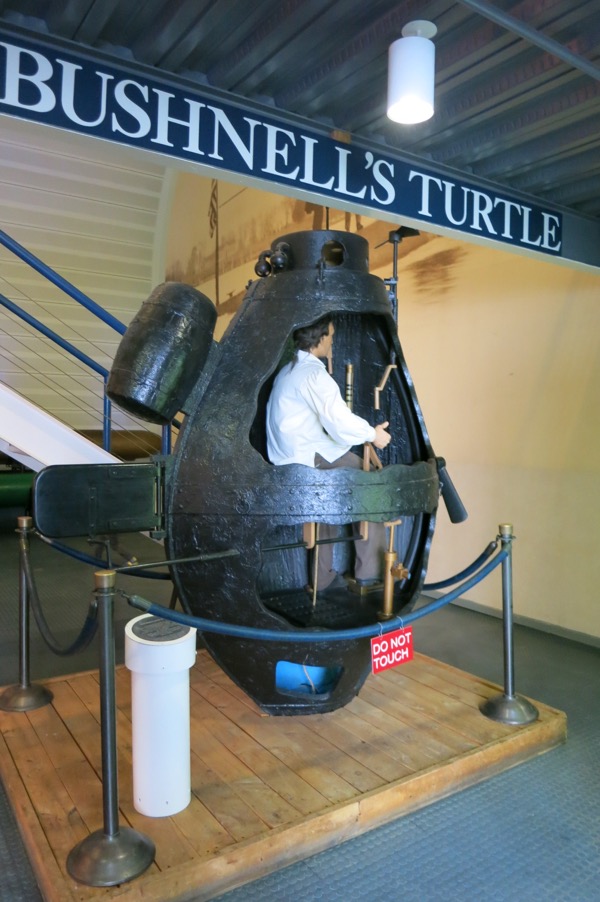 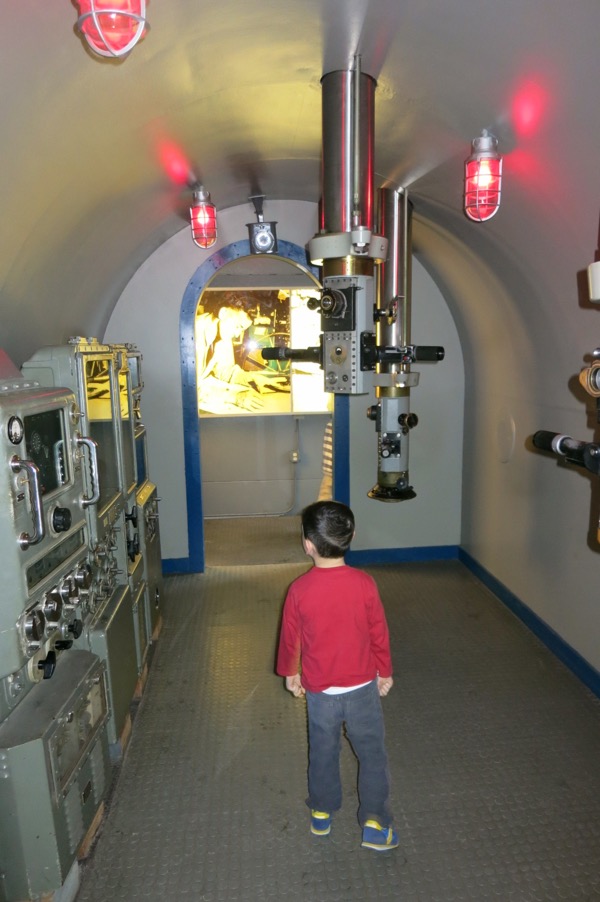 There are lots of missiles and torpedoes and weaponry here too, if you’re into that. When I try to wrap my head around the idea that we have guys 1,000 feet underwater, propelled by a nuclear reactor, with the ability to fire silo-sized missiles up out of the water, across miles of airspace, and into some Talibani compound or whatever… that’s kind of nuts.

A good friend of mine was a Naval officer on one of these subs and has, on occasion, muttered something about some top secret missions he was on in the late 1990’s (I think). This was after the Persian Gulf/Iraq stuff, so I can only assume he was involved in the US’s quiet involvement in the Kosovo campaign in 1999 or so. (We fired cruise missiles from the USS Miami during that conflict no one, including my friend, ever talks about.) 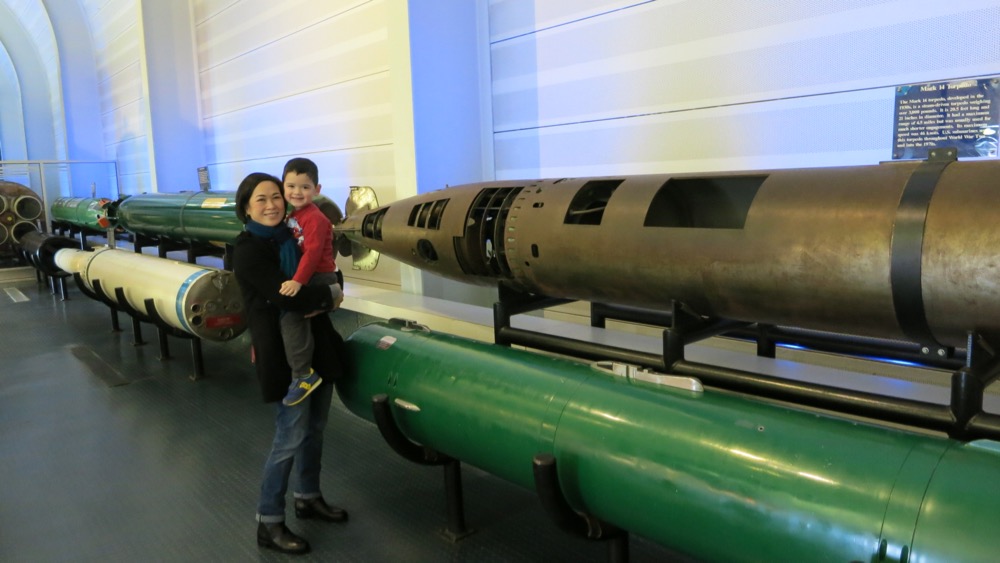 With our boys growing restless, we ventured out into the snow and down into the Nautilus. It’s pretty cool to be able to do this here in our little state. Spending only half an hour in the sub really gave me an appreciation for what it must be like to have to essentially live down there for weeks or more. It’s enough to make a man rip off his shirt and wear Birkenstocks for Christ’s sake. 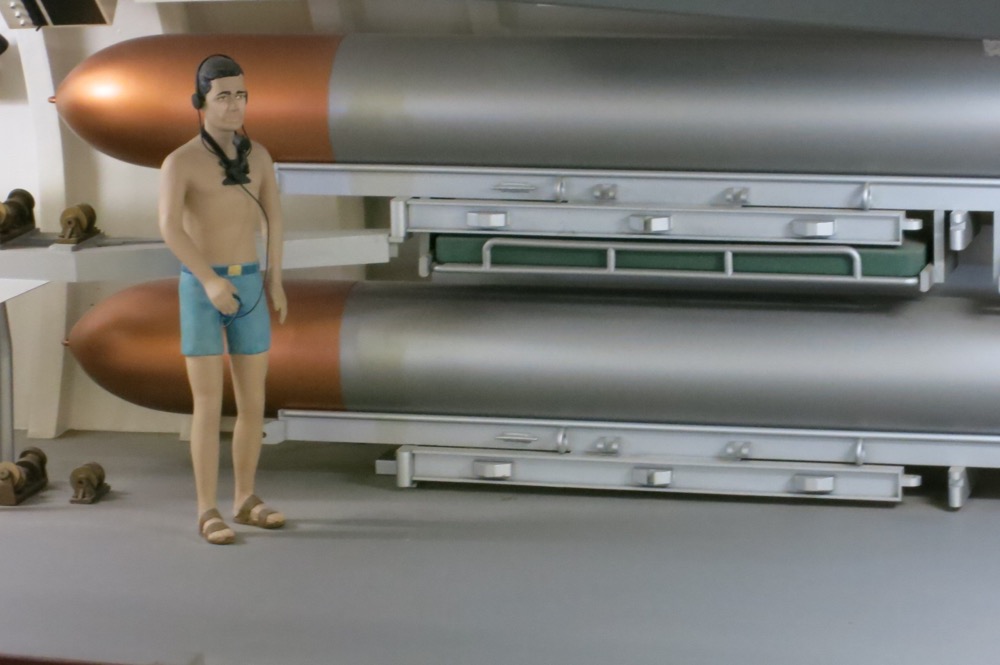 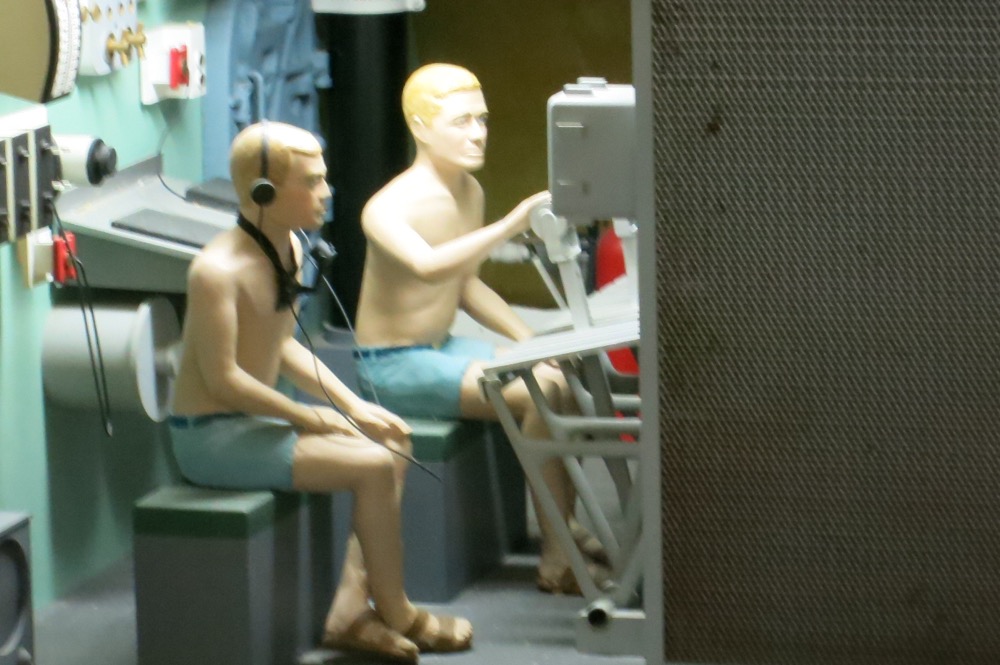 And straight up – I don’t want to ever be put in a position in which I’m driven mad enough to rip my shirt off and wear Birkenstocks.

We walked around the sub and the boys enjoyed manning the controls. Sure, the small hatchways and doorways were no issue for them, but for me? I’d bump my head a billion times in here if I was all freaked out lobbing missiles into Kosovo. 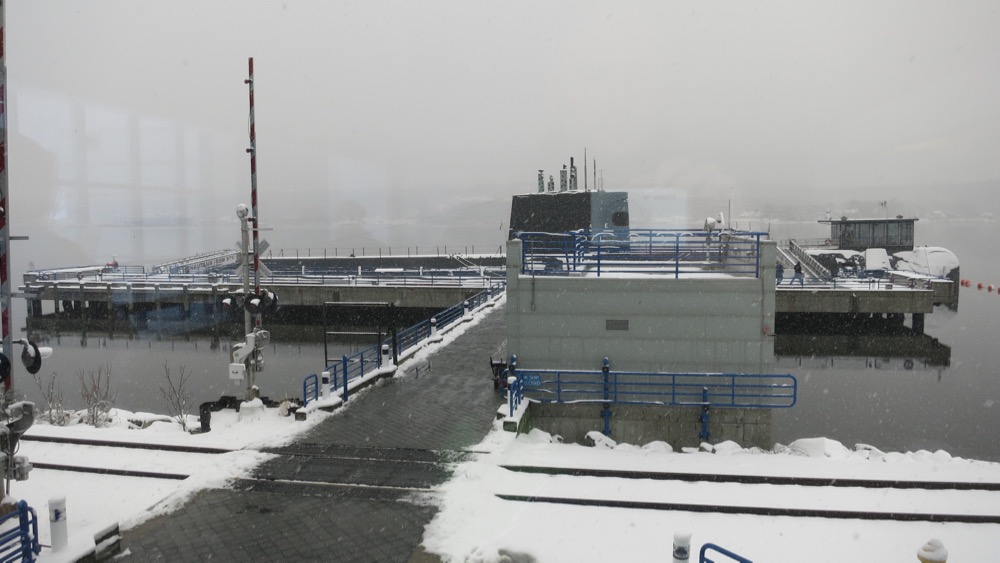 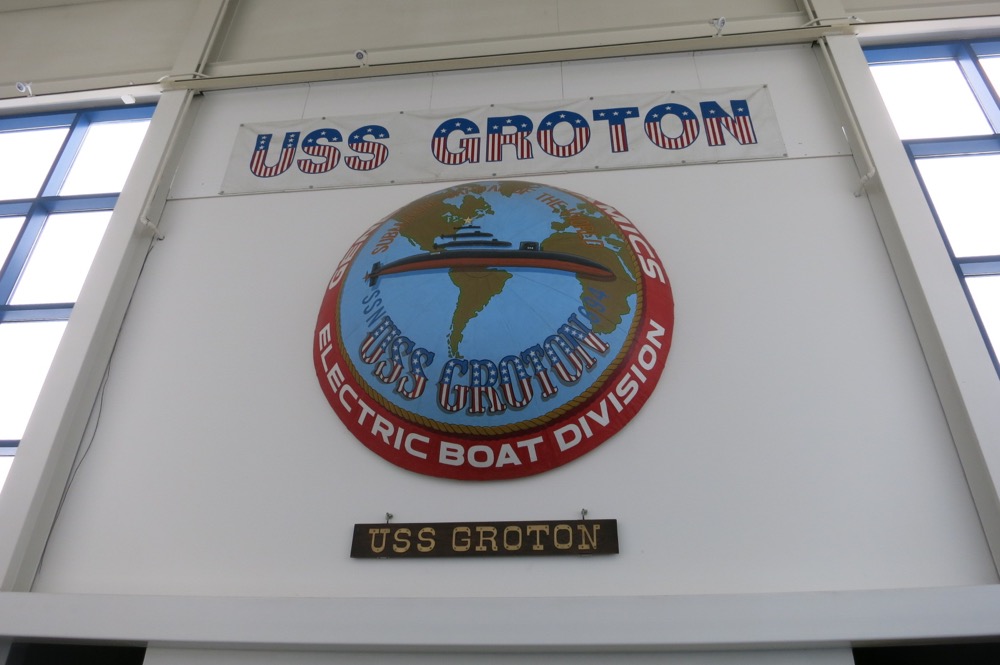 As noted, the USS Nautilus was the world’s first operational nuclear-powered submarine, but it was also the first submarine to complete a submerged transit of the North Pole in 1958. (Actually, the Nautilus has so many “firsts” no one could even catalog them all. When you’re the first and only nuclear submarine on the planet, you set every speed, depth, and distance record every time you go anywhere.) 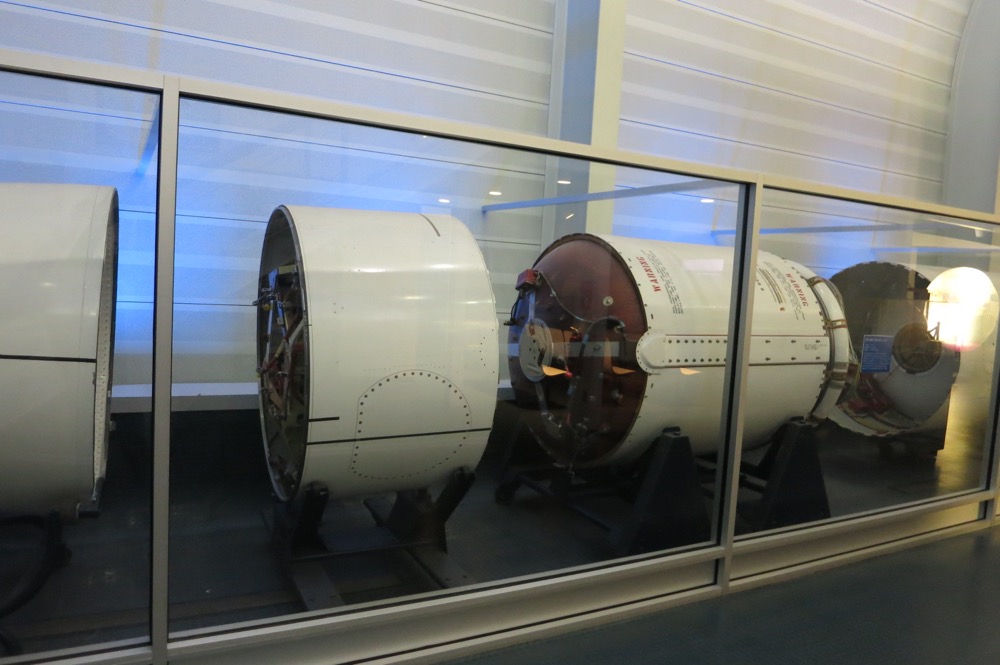 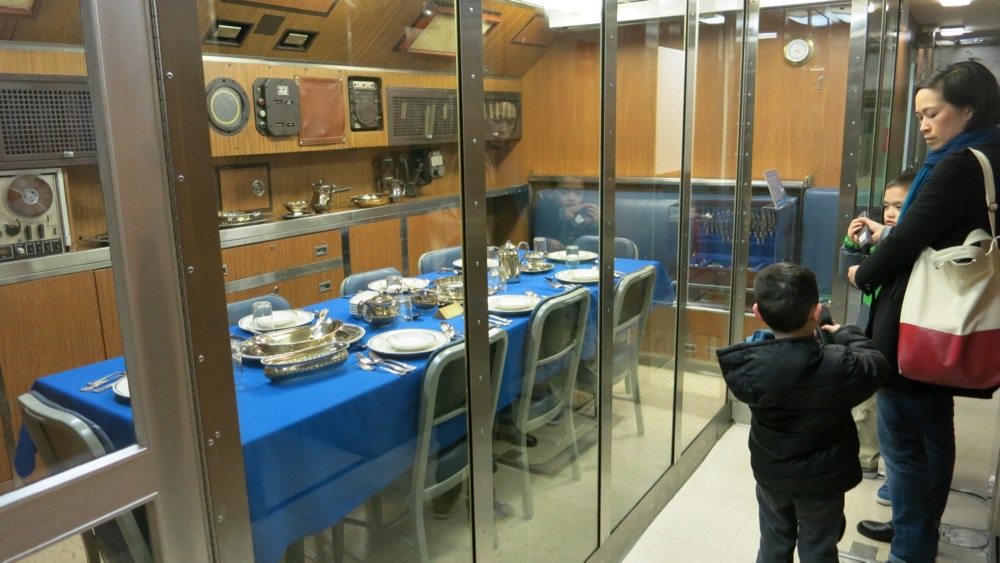 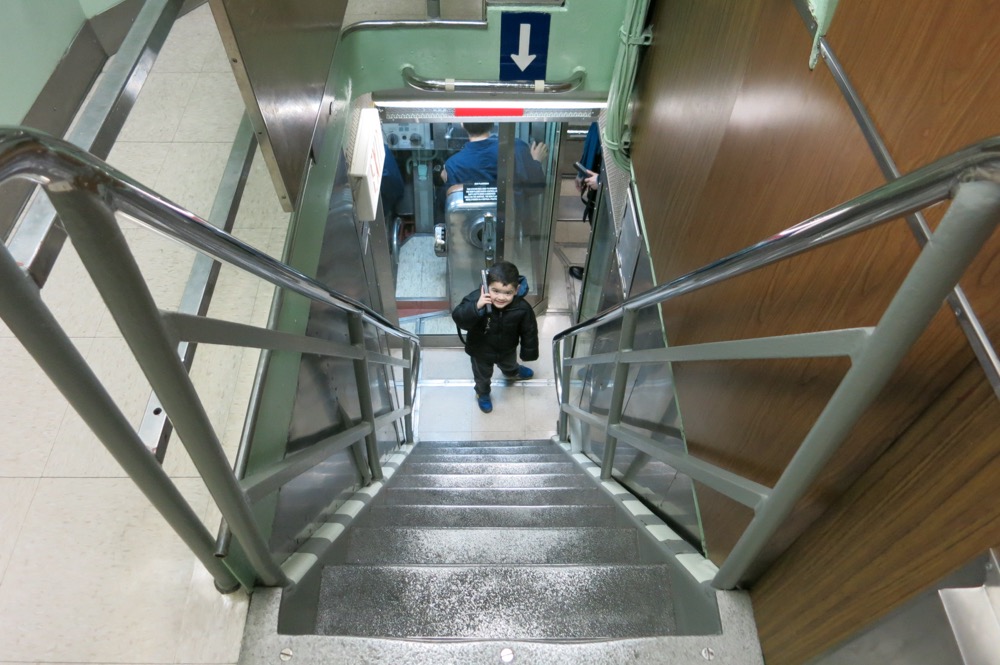 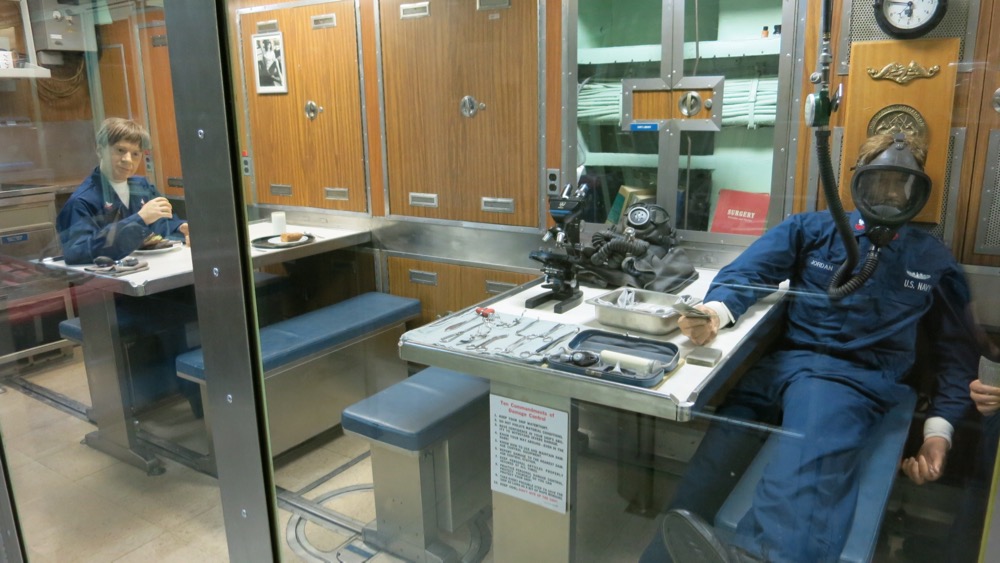 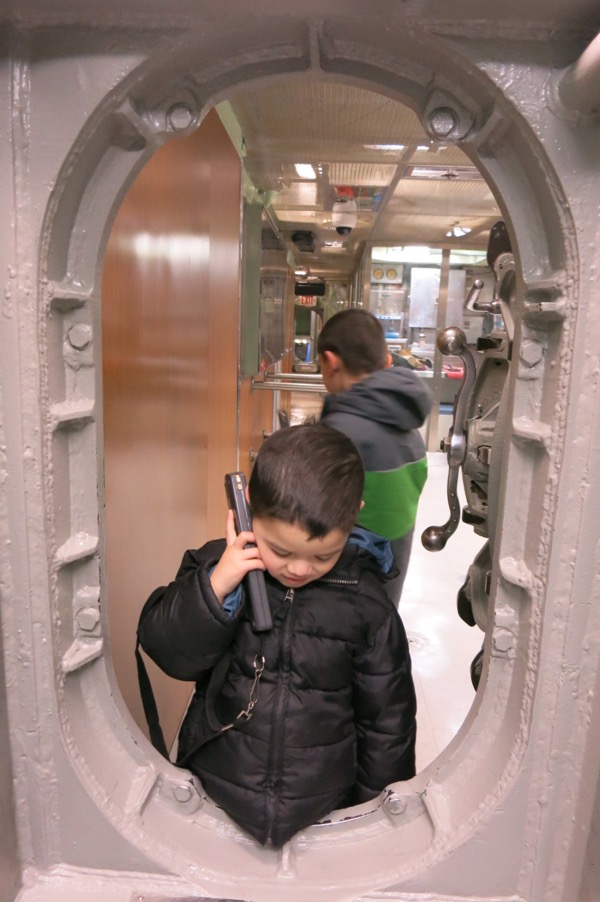 Anyway, once Nautilus became too rickety and noisy underwater, she was decommissioned in 1980. She was named as the official state ship of Connecticut in 1983, which I’m sure was a very exciting day. Extensive de-nuclearizing work was done on her and in 1986, Nautilus opened to the public as part of the Submarine Force Library and Museum, which… is why this page exists on this website.

This is a really interesting museum and the hands-on nature of the Nautilus makes it palatable to kids. Look, sure, our military meddles and bombs and kills a lot of people, but the engineering and technological advancements that have come out of it have sometimes been pretty cool. Just go check it out and leave your whirled peas at home for an hour. 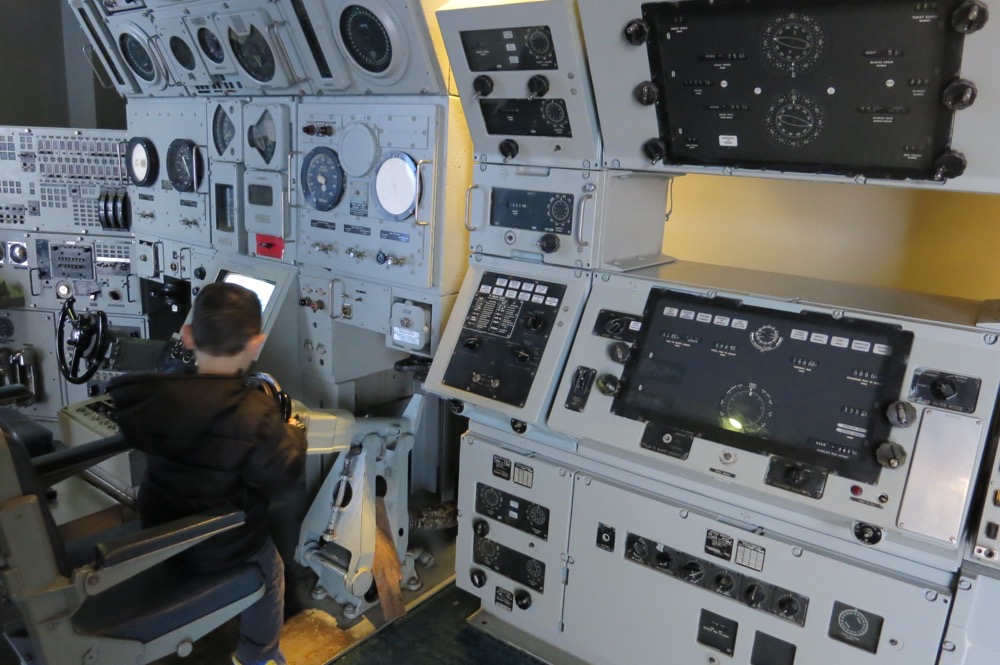 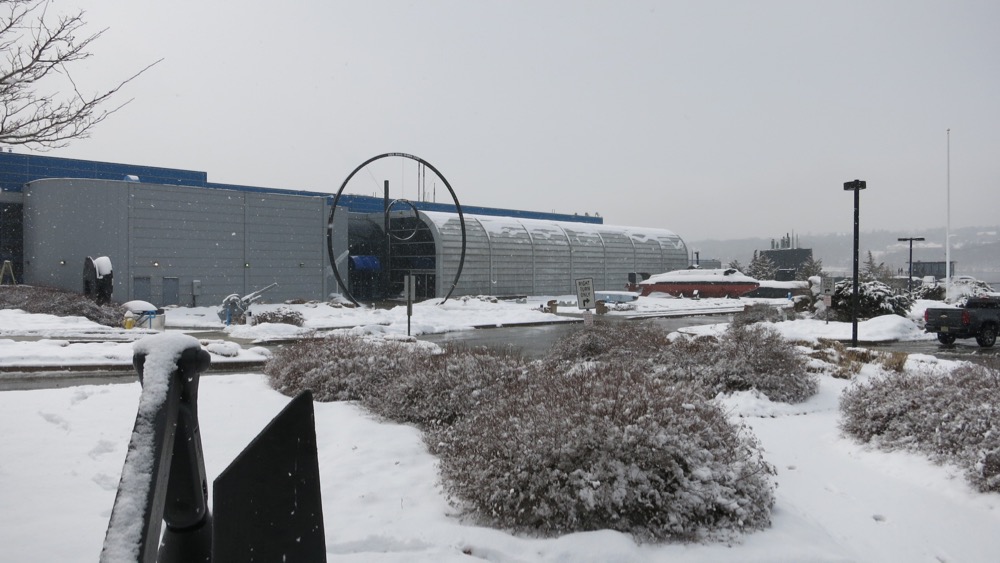