I’ve gotten a bit of grief for not exploring Litchfield County enough yet, now three years into this CTMQ adventure. While not necessarily true, I did notice I’ve not hiked a great deal in an area with some great hiking. The Appalachian Trail and the Mohawk (which follows the old AT) spring to mind. 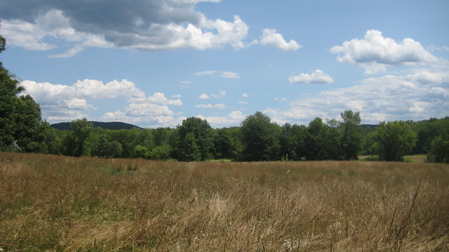 Admittedly, the Sunny Valley Preserve trail system does not. In fact, these little trails may be among the least hiked in the entire blue-blazed system around the state, but I’m purely guessing. I really have no idea.

he irony of that non-fact is that they are all on Nature Conservancy land, an organization that promotes such activities as land stewardship and hiking. In fact, the local headquarters is located on Sunny Valley Road, just across the road from this trail’s trailhead. It’s not really a place to visit (and there’s no museum or anything), but it’s worth noting. 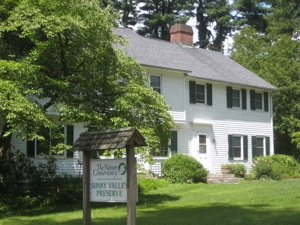 This double loop is interesting in that it purposely skirts farmland. Not just alfalfa and other crops are grown, but also a working dairy farm. There is always something very pretty to me about farm hiking for some reason. On the aforementioned Appalachian Trail, there are many miles through fields and farms from Virginia to Vermont – and while some people find that hard to believe and others don’t like it, I always did. 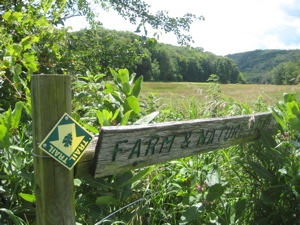 And so I happily bounced down the SVP Farm trail alongside a field with baled hay before veering west into the woods and up a hill named Round Mountain. (Not to be confused with the real Round Mountain several miles North of here near the AT.)

There are three trails in this system – the main inner loop (Yellow blazed), another outer loop and access trail (red blazed), and one that cuts the yellow loop in two (white-blazed). Purists may find fault, but I didn’t hike every foot of each trail. Sometimes I don’t feel it’s totally worth it or wholly necessary. 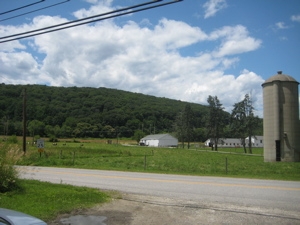 I did hike the entire white trail, 90% of the yellow loop, 100% of the red loop and half of the red access trail out to another trailhead. I felt complete.

Once in the woods, I ascended Round Mountain (really, I know the Walk Book calls it that, but it’s barely a hill) via the white trail, passing some glacial erratics and other large rock formations. This short jaunt over the hill is not unlike any other walk through the woods in Connecticut. 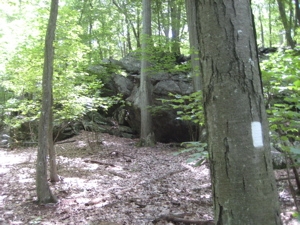 Down the southern side and beyond the power line cut, though, the flora changes quite a bit. Wild meadows splay out in all directions containing all the birds who thrive there. Green hills roll away towards farmland. It’s all quite nice – and quite a change from the usual blue trail network. 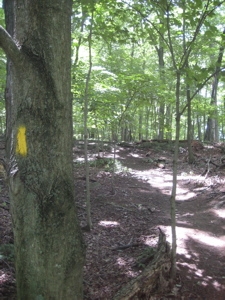 Once onto the red blazed trail, I walked through a red maple swamp complete with a duck blind. While there probably aren’t too many ducks who venture here, the blind was built to observe the many other birds that nest and feed here. In fact, the Preserve is home to a nesting Cooper’s Hawk population (a state threatened species) which is pretty darn cool. 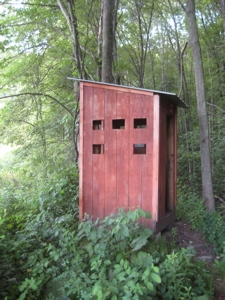 Once out of the swampy area, the red trail travels a section known, appropriately enough, as Bird Lane. Here, the trail passes along an old fence thick with multiflora rose, Asiatic bittersweet, Japanese barberry and Japanese honeysuckle. Farmers call this a “living fence” because it is impenetrable by cattle. 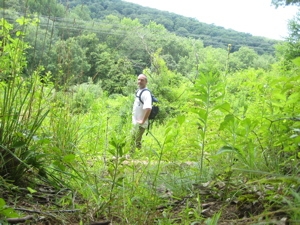 I will note that the Walk Book does point out that this “living fence” is made up of invasive species that cause havoc if left uncontrolled. It appears the Preserve works to control its spread, but with some of this stuff, that just seems impossible. I do find it odd that the Nature Conservancy accepts such a glaring example of invasive species. I’m sure they have their reasons.

Back around and again onto the yellow trail, I skirted the woods with farmland to my right. This last near-mile is a pleasant and flat walk. I sure was glad to have visited “Sunny Valley” on a sunny day. Otherwise, this just wouldn’t have felt right. 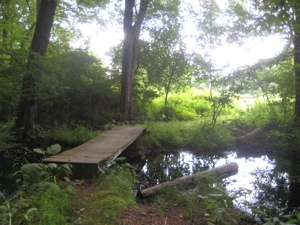 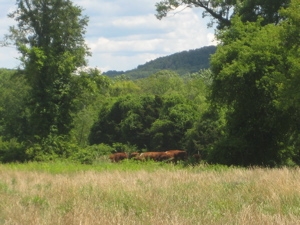 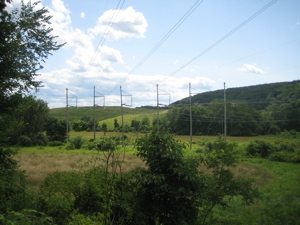 As I returned to my car, I passed a whole bunch of plastic coated hay bales, providing one final reminder that I was hiking on some viable farmland. Making this trail a unique and interesting divergence from the usual in Connecticut. 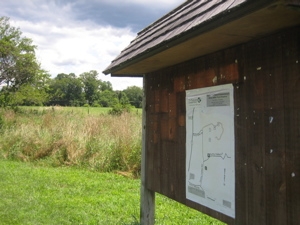