When you’re trying to get to a billion places all over Connecticut, sometimes you must visit some at night. And upon doing so, your “views,” so to speak, aren’t the best. Such was the case here, at my visits to Boston Trowtrow’s grave and the Jail Hill area in Norwichtown. 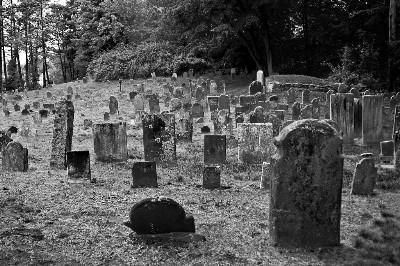 As a result, I don’t have any good pictures.

The Freedom Trail site here is the grave of an old “Black Governor.” The inscription reads: “In Memory of Boston Trowtrow Govener of ye Affrican Trib he Died May 28 1772 At 66.” The election of governors by Connecticut’s black population emerged out of African political traditions and can be viewed as a form of political revolt and self-determination. Enslaved and free Africans used the election of governors to assert their humanity and to organize for the abolition of slavery. Boston Trowtrow served as governor in Norwich from 1770 to 1772. His gravesite located at the rear of the cemetery in an area reserved for black residents, is one of the very few remaining tangible resources which provide evidence of the existence of Black Governors in Connecticut. 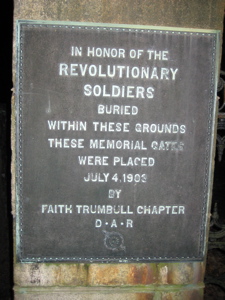 Also buried here: Four former Governors, the founder of Norwich, and Benedict Arnold’s mother, two sisters, and brother. Which reminds me, we visited Arnold’s birthplace right before this site.

More on the cemetery, with slideshow

Jail Hill is indeed, a hill. A very steep hill at that.

In the 1830s a new county jail was built in Norwich between Cedar and Fountain Streets north of the business district, an event which made the area less appealing to wealthier families. Because of lower property values and proximity to businesses and employment, a number of African American families built houses in what became known as Jail Hill. Among these families were the Williamses, Harrises, Spelmans, and Smiths. Members of these families were active in the antislavery movement in Connecticut, and after the Civil War they provided teachers in the North as well as the South. Several daughters from these families attended Prudence Crandall’s school in Canterbury. 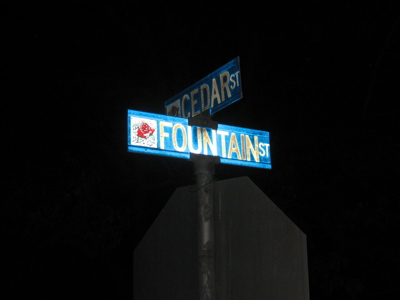 The Underground Railroad was active in Norwich, although there is little information available on how Jail Hill residents worked in this endeavor. One escaped slave who resided here was James L. Smith, who wrote an autobiography in 1881 (see Five Black Lives). Two of Smith’s daughters graduated from Norwich Free Academy and were teachers in Washington, D. C. The black community remained in the Jail Hill area into the early 1900s.