I Clawed My Way Over You for Ice Cream
Sweet Claude’s, Cheshire
June 25, 2011

I can’t remember where I read a blurb about Sweet Claude’s, but it was pretty much at the same time I decided to seek out Connecticut’s homemade ice cream spots. I read it was great and that the ice cream was made on-premises and bam! It made the list. 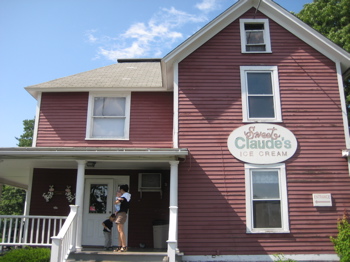 And since we were going down to Norwalk for something, I figured we could hit Sweet Claude’s on our way back home during the afternoon. So that’s exactly what we did.

I actually lived in Cheshire for about a year or so back in 2000, but I’d never even heard of Sweet Claude’s, let alone been there. I lived on the “other” side of town and my ice cream loving housemate (okay, “housemate” is not the right term seeing as though I pretty much squatted there during some of my tougher times. Love you, Kev and Jenny!) Anyway – we were Dairy Queen fans and we had one of them very near the house. 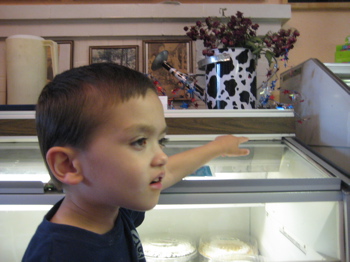 Fact: I think Blizzards are as great as any top end super expensive high quality ice cream. They are just wonderful and I don’t care who knows I think that.

I don’t think I ever traveled south of The Stop and Shop on Route 10 in Cheshire in all my time there. Visiting Sweet Claude’s was breaking new territory for me, which is pretty rare these days: Route 10 between the Cheshire Stop and Shop and the Route 40 connection. It was AMAZING.

Just kidding – it was the same as any other exurban strip mall area. Except for one thing: sweet, Sweet Claude’s.

We pulled into the lot and parked under a slightly out-of-the-way shade tree so Hoang could feed the baby. In the meantime, Damian and I made our way into the ice cream shop and got the run down.

For 23 years Sweet Claude’s of Cheshire has been serving the area’s best homemade ice cream. We are family owned and operated. All of our ice cream, frozen yogurt, ices, tofutti and sorbet along with the hot fudge (an old family recipe) are made on the premises. We take pride in our product and our exceptional customer service. 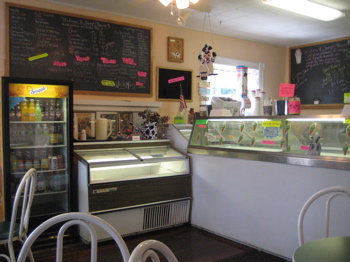 Wait. They make their own hot fudge?! I can’t believe I didn’t do my research beforehand.

Sweet Claude’s is pretty darn small, but they seem to rely on their patio and picnic areas for their patrons to eat.

I went with a coffee espresso ice cream and bought Hoang the toasted almond in anticipation of what she’d want. I offered up Damian a choice and he was adamant on “vvvvvvvv” which is Damianese for vanilla. Boy, I bet he really could have benefited from the hot fudge that we didn’t get. Oh well.

As we ate, I kept checking outside on Hoang who wasn’t coming in as quickly as I’d expected her to. A nursing mother needs to replace her milk with frozen toasted almond cow’s milk, dontcha know? It’s a scientific fact. Hoang finally came along with a sated Calvin and dug in. In fact, I think she finished before either Damian or myself, but that’s no surprise. 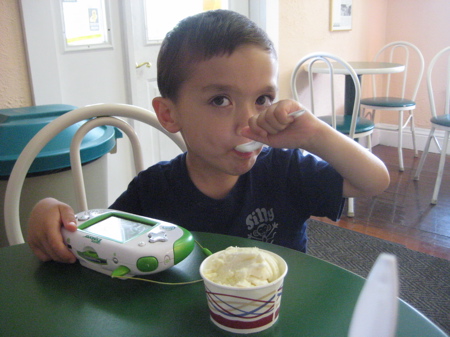 Sweet Claude’s was good and they seem to have a rather robust slate of changing flavors and styles of treats. But in the pantheon of great ice cream places around the state, it didn’t knock my socks off.

And I still love Blizzards.