CTMQ > Everything Else > Houses, Communities, Libraries, & Businesses > The Battle of the Frogs

Every so often I delve into one of Connecticut’s urban legends. It must be said that when I do so, I heavily rely on those who have written about these things previously. They are often the rare pages on here where 100% of the words and thoughts aren’t mine. Such is the case here. 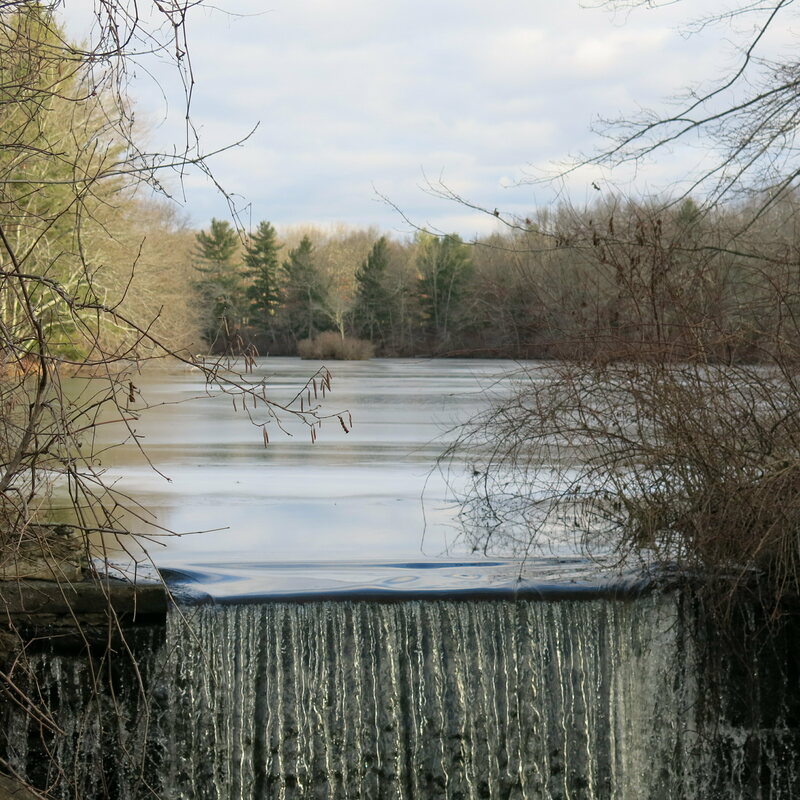 I wasn’t alive in 1754. Or in 1758 when some sources say the mythical night occurred. Nor am I an expert on the French and Indian War. Or frog mating behavior. Or the rampant ignorance of pre-Revolutionary colonists.

But I am a Connecticut expert… insofar as I know a lot of dumb stuff about this little state, and after nearly two decades of writing, I can no longer ignore Windham’s “frog thing.”

Frogs are everywhere in Windham and its more well-known urban core, Willimantic. Everyone is familiar with the Frog Bridge (but not so familiar to know the actual name of the bridge is the Thread City Crossing, but whomever thought that name would stick is a ding-dong). There, four 11-foot copper frogs sit atop giant spools of thread. Designed by artist Leo Jensen, the metal frogs pay homage to the Battle of the Frogs and are named Willy, Manny, (Willimantic) Windy (Windham) and Swifty (Willimantic’s purported Algonquin definition is “land of swift running water). 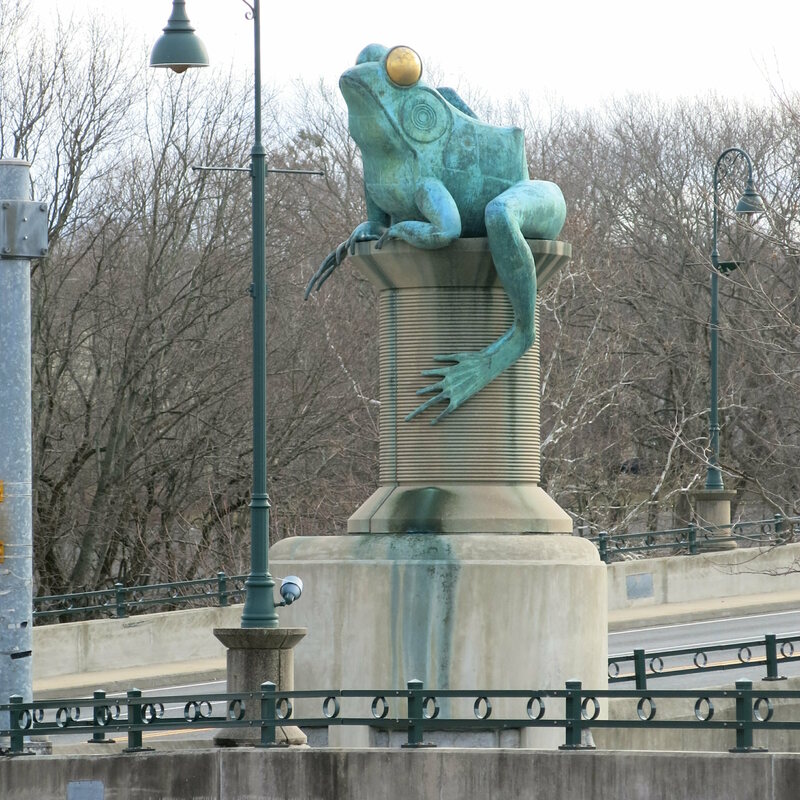 The town has had a “Frog Parade” like other towns have had Cow Parades. Frog art can be seen all over Willimantic. A frog features on the iconic Willimantic Brewing Company’s signage. In the 19th century, several ballads about frogs were written in town. Also, throughout the 1800’s, the Windham Bank issued several banknotes that featured frogs on them. The $1 banknote issued by the Windham Bank included a depiction of a dead frog with another frog sitting on top of it. Rad.

Heck, an opera was written and performed about frogs back then… revived in 1983! The Windham town seal features an oak tree.

Just kidding. There’s a frog there too. 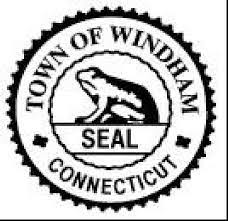 Clearly this is a weird town with a weird thing for frogs. And you may have heard of “The Frog War” or “The Battle of the Frogs,” but let’s sort out what this was really all about. Spoiler alert: it actually is as ridiculous as you’re remembering.

Again, this was the 1750’s. People were dumb. Windham was more or less frontier at the time; some farmers and backwoodsmen lived here and they were experiencing a severe drought. The French and Indian War had recently broken out and life was difficult to say the least. Let’s assume that everyone was on edge and perhaps weren’t sleeping very well.

Word on the trails was that an attack from French and Native American forces was imminent. It was hot. Muggy. Gross. People were thirsty? Dehydrated? Let’s say yes.

Out in eastern Windham, over near Scotland, there is a millpond that was known as Follett’s Pond. It’s still there today and you can see it from Route 14 near the town border. Follett’s Pond was perhaps drying up from drought.

Then it happened. The night of the Battle of the Frogs. 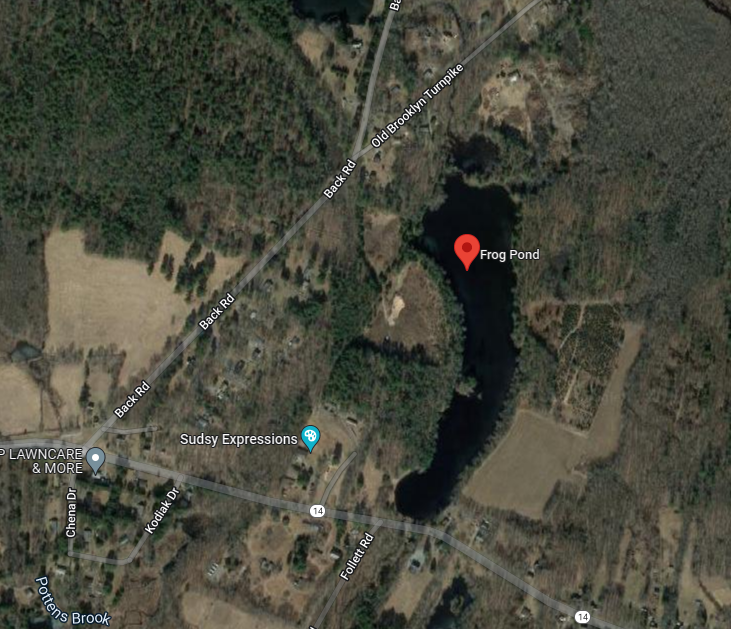 On a particularly humid and insufferable night, locals were woken up by terrifying noises in the woods, unlike anything anyone had ever heard. Some thought it was attacking wolves or bears, and others feared it was the invading attackers they’d been worried about. Still others were terror stricken that it was trumpets heralding the end of the world. For real. This is actually more or less true from all I can gather.

Two town militia leaders were Eliphalet Dyer and Jedidiah Elderkin. The latter had plans to colonize the Susquehanna Valley which was a known sore spot with natives. So when I tell you that some frightened townsfolk swore they heard the names “Dyer” and “Elderkin” being chanted by the attacking natives through the din, you’ll accept that as rational.

And when Dyer and Elderkin rushed into the darkness, firing their muskets, you’ll say, “what a couple of noble heroes.” Townsfolk ran into the streets, some with guns and knives. Others who were armed mounted a hill to see the landscape around them. As dawn neared and the marauder’s war whoops died down, these clowns and the huddled locals celebrated their victory. 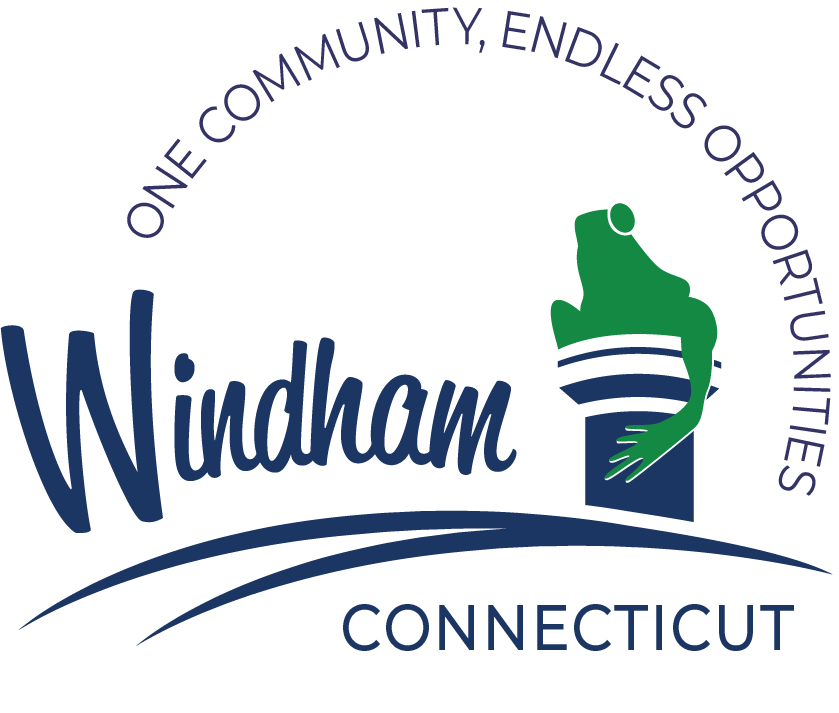 The generalities of this story are definitely true. The details are a little murky, as they always are.

With daylight upon them, the source of the sound was discovered. The colonists found hundreds of dead and dying bullfrogs in the last remaining puddles of Follett’s Pond. (Coincidentally, the pond was owned by Dyer.) Because the drought had dried up all of Windham’s standing water, a horde of frogs had descended on that one remaining wet spot and fought over it. Perhaps.

Yes, what the Windhamites had heard were the battle cries and dying moans of thirsty bullfrogs, magnified by the cloud cover and muggy air.

I’m sorry, this still sounds ridiculous to me. But the story spread far and wide and the townsfolk were ridiculed throughout Connecticut and beyond. There are actually contemporary accounts of the incident, each more or less corroborating that there was, indeed, a sort of mini mass hysteria in rural Connecticut that night. Arms were really taken up and people were really freaking out. My favorite account is from “Linda,” Dyer’s “servant” I believe the correct term is “slave” though:

Well it was in June, and the weather was very hot, and Master had drawn off the Pond to fix the dam. When he came home he did not think of nothin’—by and by when it became cool there began to be a rumble, rumble, rumble in the air, and it grew louder and louder and louder, and seemed to be like drums beating in the air. Well, it was in the old French War, when our men had gone to Belle Isle or Canada to fight the French and Indians, and some guessed it was the Injuns having a powwow or war dance on Chewink Plain, and we should all be killed in the morning. But Master and Colonel Elderkin and Mr. Gray mounted their horses and rode to the top of Mullein Hill, and as the pond was a little over there beyond they found out what it was—and the scare was over. Master said he supposed the frogs fought each other for the next day there were thousands of them dead. They croaked some the next night but nothing so bad.

We must ask, how was any of this remotely possible? A bunch of dying frogs in the woods created noise loud enough to terrify so many people? Let’s turn to an expert. Susan Z. Herrick grew up in Windham and is, or was, an Assistant Professor-in-Residence at UConn studying… you guessed it, frogs. Because she’s from Windham. And that’s apparently a rule. 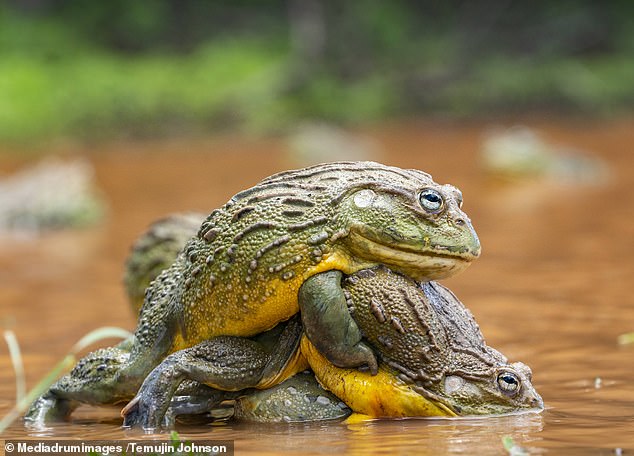 Herrick has stated that she suspects the bullfrogs were making “advertisement calls.” The bullfrogs, confronted with a shrinking shoreline and being pushed together as they lost physical territory, may have shifted their mating strategy. With so many males in a small pond, Herrick speculates that “all the males gave up on having any territory at all and focused strictly on at least getting a female. With no coordination of calls, it must have been a God-awful noise, and I think this is what the villagers heard.”

As others properly and rightfully goofed on Windhamites as a result of this absurd escapade, the town reacted in the best possible way. Instead of lying about it or playing it down, they embraced the story. They owned it, first by putting the bullfrog on their town seal that has lasted into the 21st century. 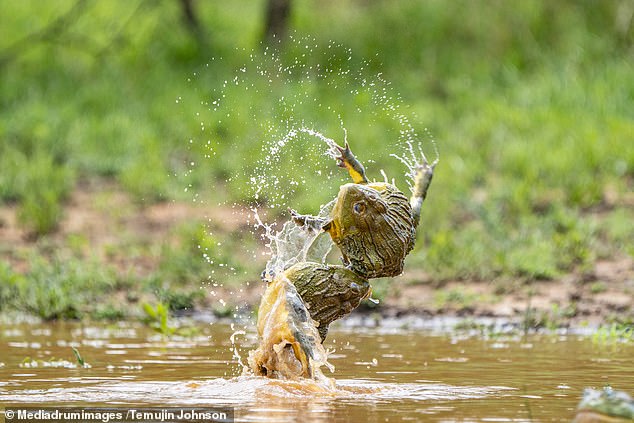 They town erected a little monument at the site of the Bullfrog Battle in 1920, but it was moved to the town green when the pond came under private ownership. It’s still there today, though barely readable. Follett’s Pond was officially renamed Frog Pond as well.

At some point in the 1750’s, on a hot night with war looming, a millpond in eastern Windham dried up due to drought (or a farmer draining it) and a bunch of bullfrogs started fighting over the last remaining water (or were trying to mate like mad) and their croaks and whelps scared a bunch of people who in turn scared a bunch of other people who took up arms to protect their families and land. They learned at dawn that they were scared of frogs and it became a whole thing that lasts to this very day.

I buy it. Perhaps only a few people actually heard the noises and freaked out. A game of telephone created a mini-panic in town and the majority of people were reacting to the news, not, perhaps, to the actual sounds. Yeah, okay, I’m satisfied with this story now. 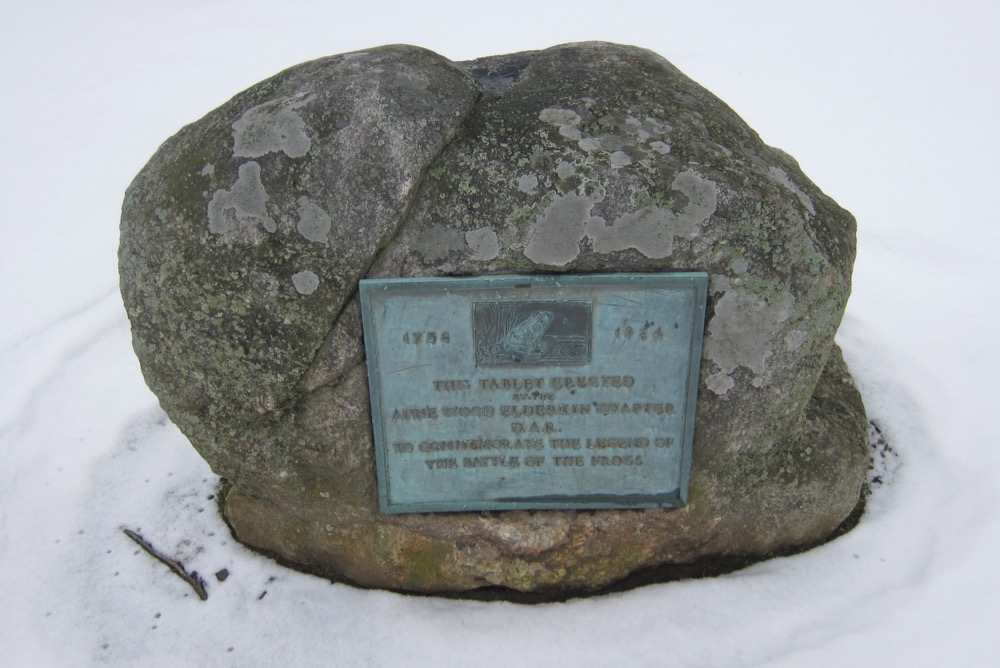 The marker on the green today