I was initially drawn to this school because of its fairly surprising architecture. Surprising because it’s in Bloomfield and also because it’s an orthodox Jewish school. I mean, look at this building:

It’s located on a cut-through road with a stop sign that no one ever stops at. And I’d treated it as a mild curiosity for years, until I decided to read about it. That’s when I learned that “the modern architecture of the building and its synagogue with domed ceiling are reminiscent of the city of Jerusalem.” At first I thought they were nuts, but then I thought about what buildings in Jerusalem looked like, and… it’s still a stretch.

But I continued reading and that’s when I learned that The Bess & Paul Sigel Hebrew Academy of Greater Hartford is the oldest orthodox Jewish day school in the United States! The school was founded in 1940 as the Yeshiva of Hartford, originally located on Cornwall Street in Hartford, it moved to its present facility in 1974. In addition to the traditional classes the rest of us attended, their Judaic program offers an outstanding program in Jewish Laws and Customs, Talmud, Mishna and Hebrew Language, prophets and Jewish History Whoa! Right there in bloomin’ Bloomfield! 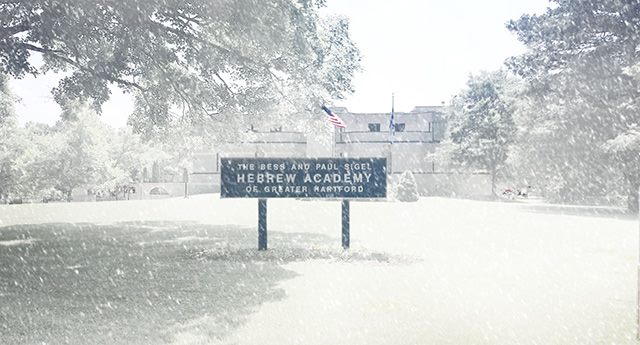 Unfortunately (or, perhaps, fortunately) the The Bess & Paul Sigel Hebrew Academy of Greater Hartford will be moving out of their unique building in 2021 once their merge with the Hebrew High School of New England (only a mile or so away) is completed. The new combined school is called The New England Jewish Academy and serves students in the West Hartford, Greater New Haven, and Greater Springfield communities as well as boarders from the southern New England region. The 2019 merger of these institutions establishes a preschool-grade 12 Modern Orthodox Jewish day school that will help ensure the vitality and growth of this area’s Jewish community.

I’m not sure if they means they’ll lose their randomly excellent CTMQ superlative. I should think not, as the school and program will still exist, just down the road with a new name. So… congrats Bess & Paul Sigel Hebrew Academy of Greater Hartford… you’ll live on here on the all-important pages of CTMQ.