You’ve been Warrened
The Conjuring, 2013

I have somehow almost completely avoided crossing paths with Lorraine and Ed Warren. They have both passed away but their legacy will certainly outlive me – not only in Connecticut, but across the nation. 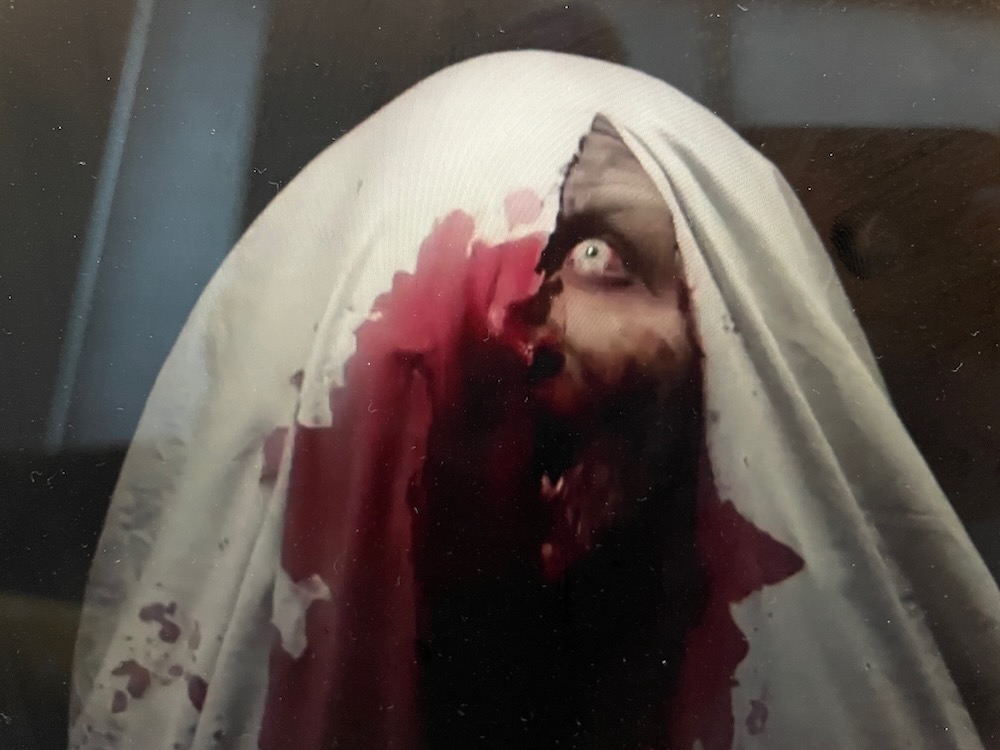 The famous Warrens. In fact, I’ve heard some radio ads recently for a “paranormal” convention featuring one of the Warren’s most infamous items – the Annabelle doll. It’s all hokum to me, but someday I’ll somehow visit or write-up their museum if and when the Warren son sorts out what he wants to do with it.

Lorraine Warren herself was involved with this movie. (She can even be seen in an early scene in an auditorium crowd.) For a variety of reasons, the movie took forever to make. It was shuffled around multiple production companies, writers, and directors. At one point in 2009, a six studio bidding war erupted for its rights. 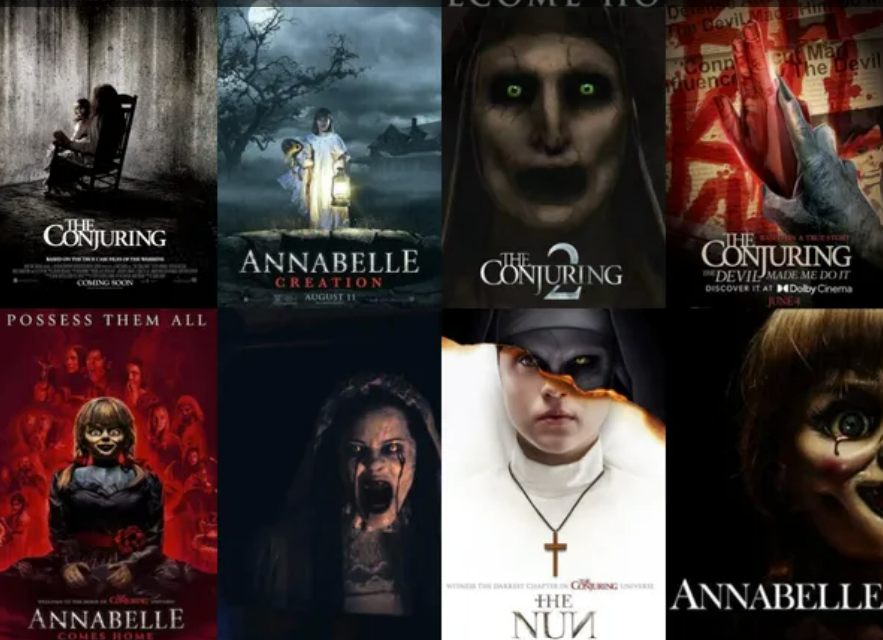 This franchise has legs… and it’s still going in 2022!

In the end, James Wan agreed to direct and it was backed by New Line Cinema and Warner Brothers. The Warrens got theirs in the end. In fact, The Conjuring conjured $137.4 million in North America and $182.1 million in other countries for a worldwide total of $319.5 million, against a budget of $20 million. I guess that’s why there have been tons of sequels since its success.

So that’s all great. But I just can’t abide by the whole grift. Anyone who knows me knows that I am not a ghost and paranormal guy. I get how and why it can be fun, but it’s all ridiculous to me. 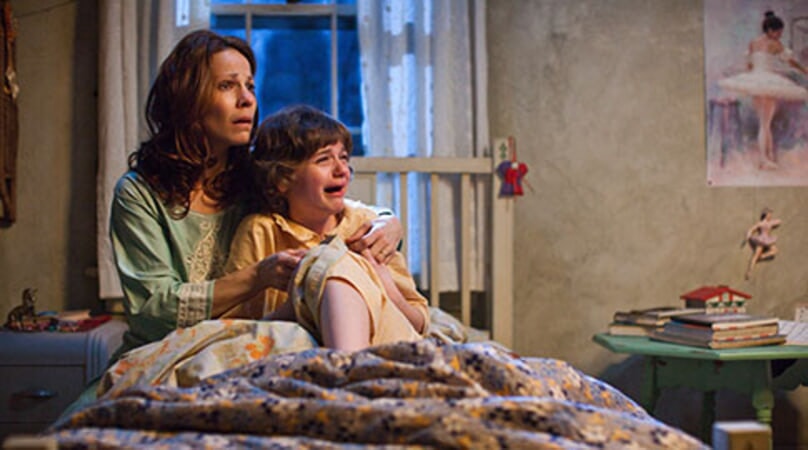 The movie has decent star power with Vera Farmiga as Lorraine Warren, Patrick Wilson as Ed Warren, Lili Taylor as Carolyn Perron, and Ron Livingston as Roger Perron. Lili Taylor has the distinction of having major roles in two of the most successful Connecticut movies: this one and Mystic Pizza. Shout out to her.

(And Ron Livingston will always be Peter from Office Space to me.) 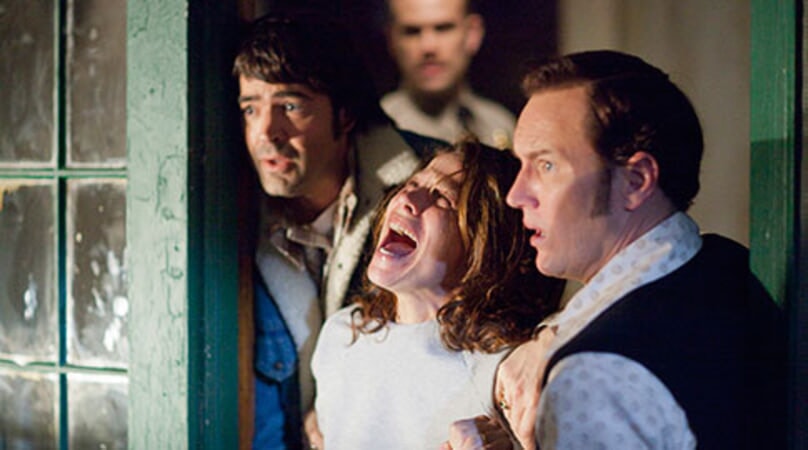 In preparation for their roles, Farmiga and Wilson traveled to Connecticut to spend time with Lorraine in Monroe. “I just wanted to absorb her essence. I wanted to see the details, she has such mad style. I just wanted to see – the way she communicates with her hands, these gestures, her smile, how she moves through space,” said Farmiga on her observations of Warren.

Lots of background material, sorry. The movie opens with a sort of flashback with Annabelle and some possession stuff which leads to a 1971 presentation by the Warrens telling a crowd about their paranormal investigations. 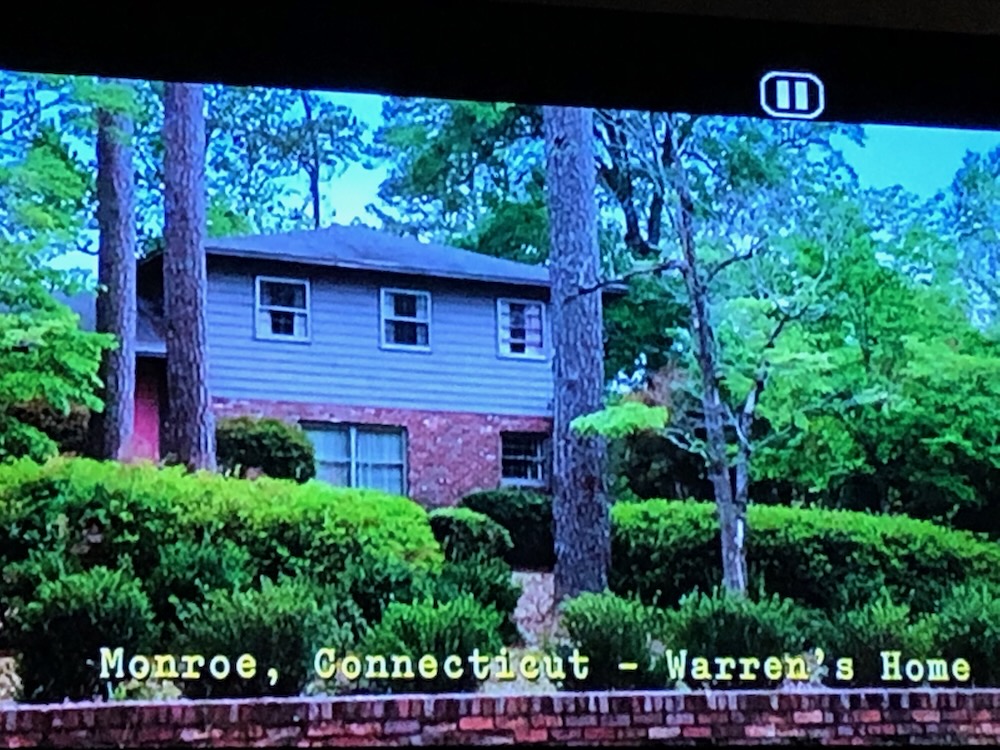 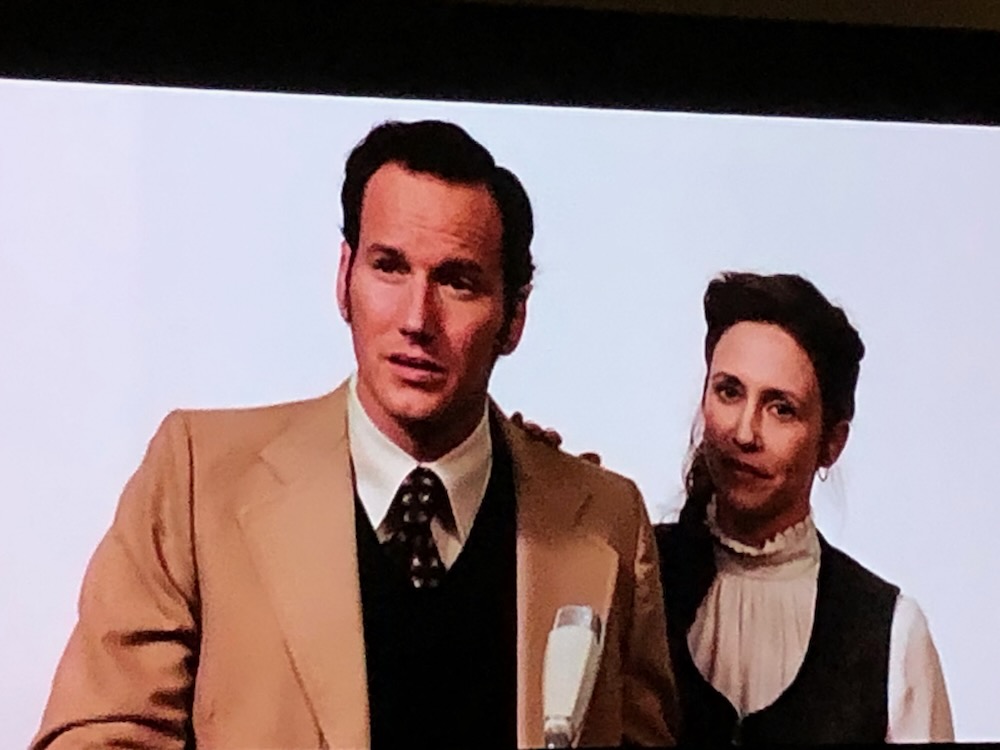 It’s nice to watch a bigger budget horror film for once. It just looks good… and that’s good.

Meanwhile, Roger and Carolyn Perron move into a farmhouse in Harrisville, Rhode Island, with their five daughters: Andrea, Nancy, Christine, Cindy, and April. (The real house this whole thing is based on is in the Harrisville section of Burrillville. Get this: other “paranormal investigators” bought the real house in 2019 for $439,000 and just sold it in 2022 for $1.52 million, playing up its hauntedness. Grift. It’s all a grift.) 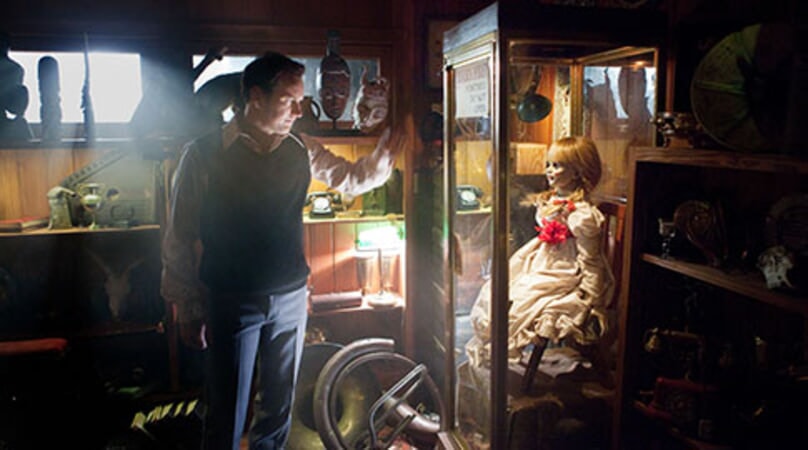 The movie. Just the movie from here on out, I promise. A movie which, like so many of these kinds of movies, involves a basement that no one should explore… yet everyone does.

From the moment the Perrons begin to move into their new house, their dog Sadie knows what’s up. She doesn’t want to go inside. Sadie didn’t last the night, unfortunately.

Lots of spooky things happen immediately beside the family dog dying: All the clocks stop at 3:07 AM, it’s cold, there are rooms that are mysteriously stinky, the mom Carolyn wakes every day with more bruising on her body, the basement is boarded up, and oh, Carolyn and one of the daughters straight up sees a ghost. 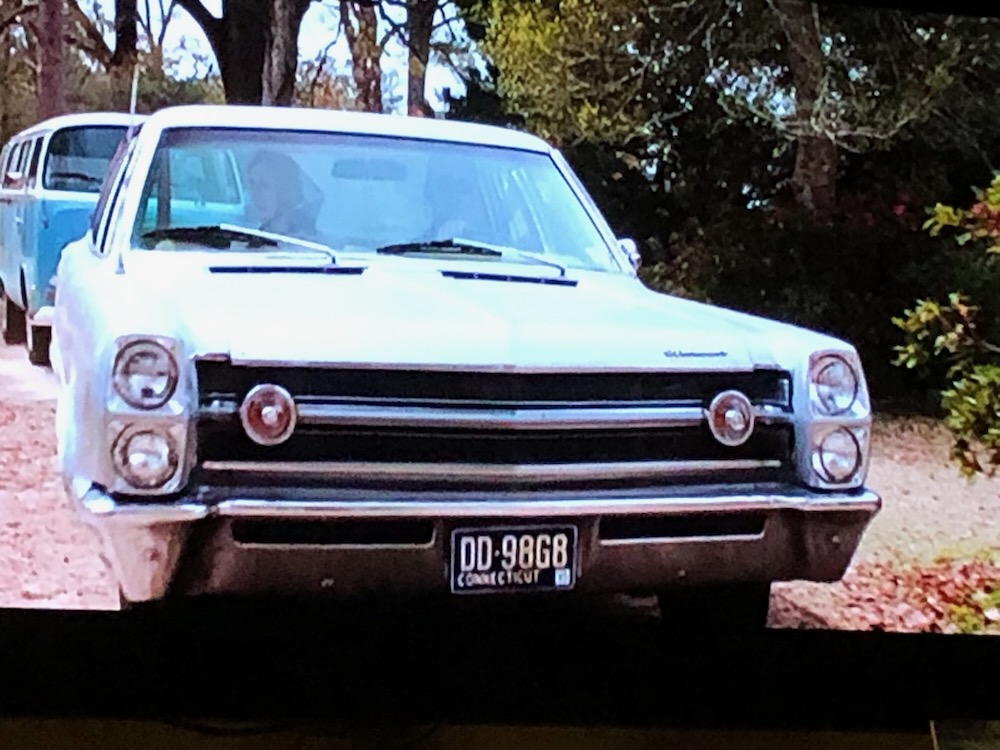 As always, shout out to license plate accuracy

Carolyn reaches out to the Warrens who ultimately agree to check out the house. We get a little tour of the Warren’s house and what I assume their museum more or less looks like.

Oh yes, the Perron’s house is indeed possessed and it’s a bad one! The Warrens must save the day! Dark forces have latched on to the family, especially Carolyn. Dad just sort of bumbles through, trying to earn some money and keep his brood thinking positive. I dunno, if my wife kept awaking with 5 fresh new big bruises, I’d show more concern. 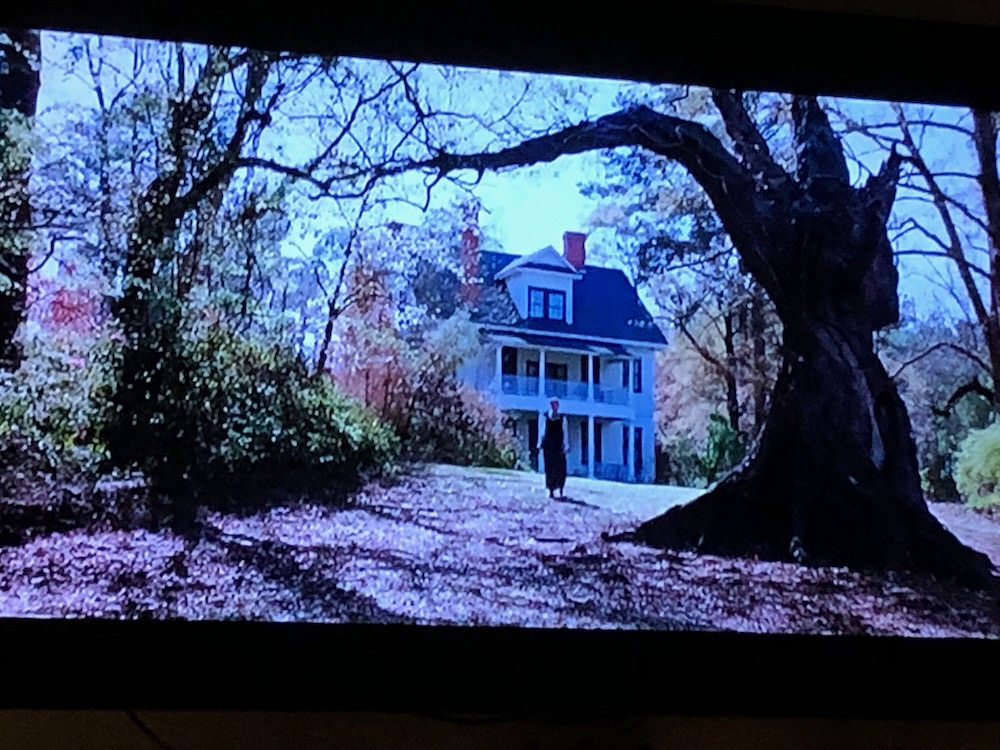 At least he allows the Warrens and assistants set up shop to catch these ghosties. Lorraine does some research and we get some dumb story:

The house once belonged to an accused witch named Bathsheba Sherman, who sacrificed her week-old baby to the devil and killed herself in 1863 at 3:07 in the morning after cursing all who take her land. There are reports of numerous murders and suicides through the years in the houses that were built on the property. Yada yada yada. 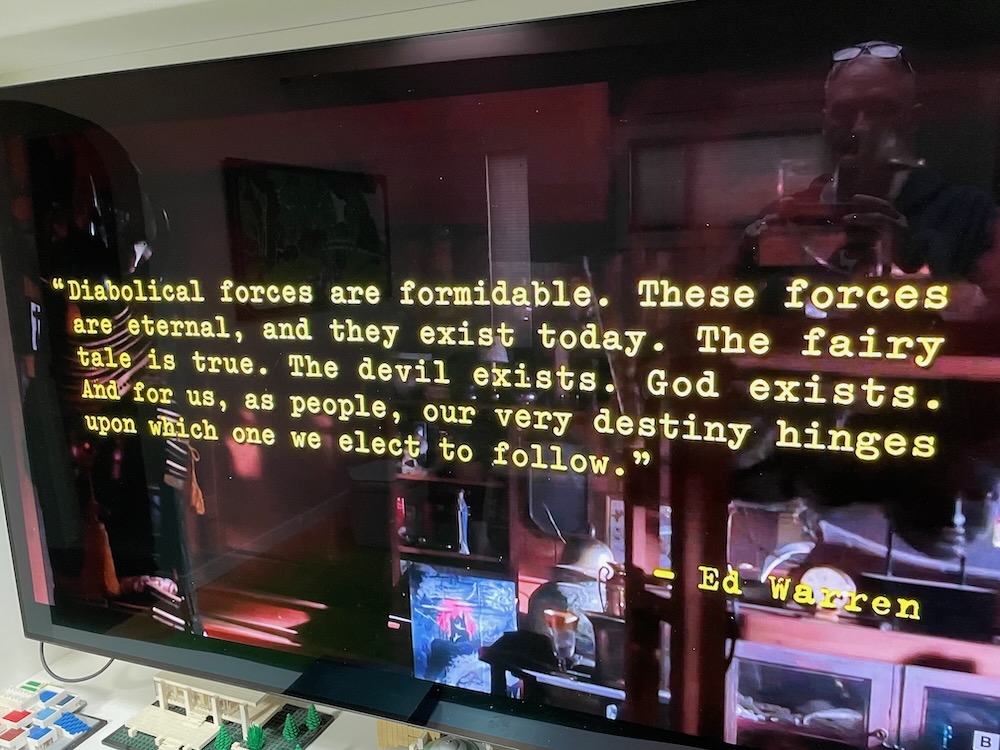 There are some legitimately well-directed scary scenes. Bathsheba possesses Carolyn and the poor daughters have a rough time of it, seeing scary things and smelling rotting meat everywhere, and getting vortexed through wardrobes to the off-limits basement. Lorraine gets mixed up in all of these scary things and Ed has concerns.

You see, Lorraine can’t handle these things anymore. She’s all sorts of mentally scarred from previous spookiness. Oh what a tangled web. On top of that, they need a priest to perform an exorcism! And their priest friend says the Pope himself must okay it! Because the Perrons aren’t Catholic! 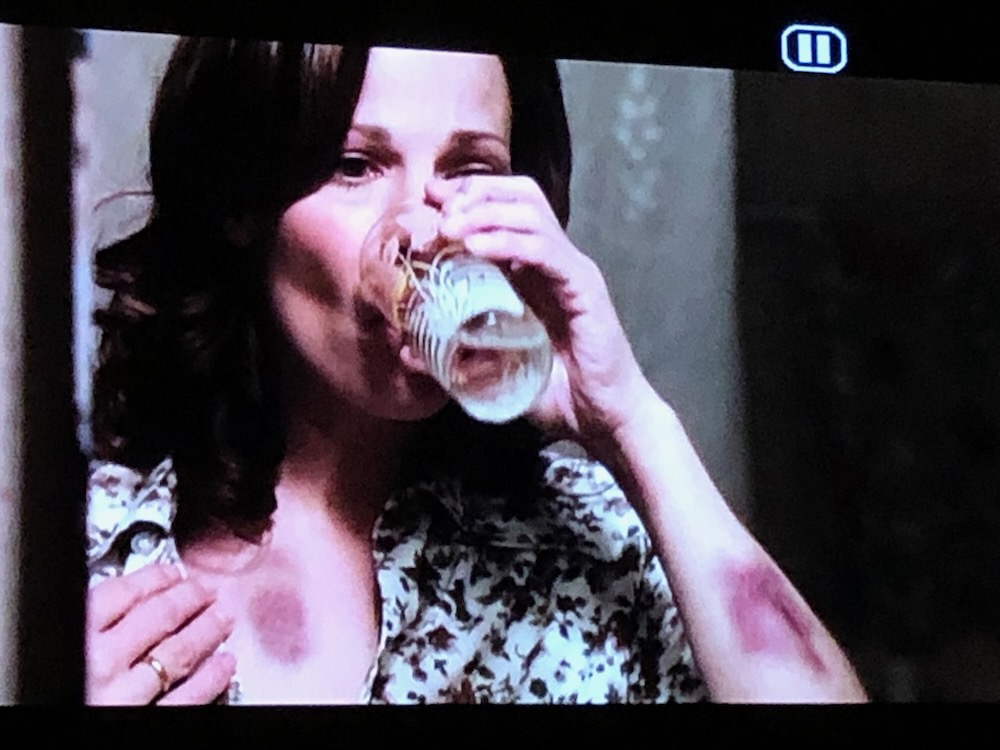 Is that a thing? Like, this family is literally possessed by murderous evil and in imminent danger of horrible, torturous death, and the Catholic church is like, “nah man, you grew up in a different tribe of Christianity so good luck with that?”… I had no idea.

Oh, but this house is really bad news. Lorraine sees her own daughter Judy drowning in the lake on the property and immediately drives home to Mornoe. Then they drive back to the house in Rhode Island in what seems to be mere minutes. I-395 wasn’t completed until 1983! This is ridiculous! (I’m just kidding, I don’t really care. It’s a movie about things I don’t believe in so what’s a little geographic silliness?) 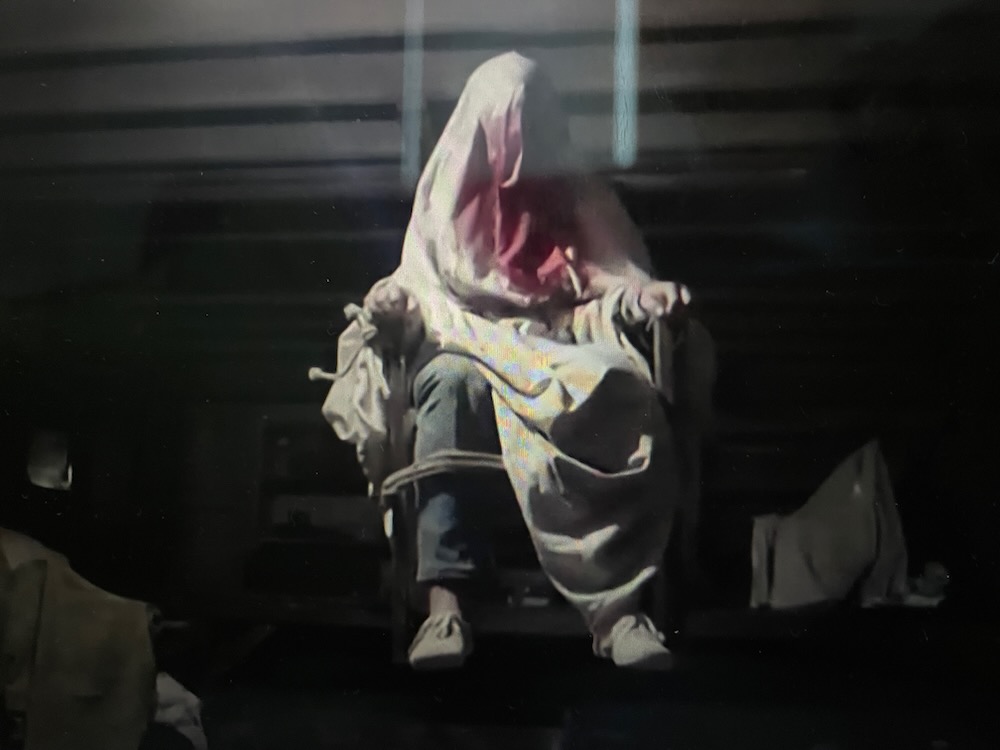 Back at the possession, it’s a mess. “Possess the mother to kill the child!” means something somehow and Carolyn is fully possessed and wants to kill a daughter and they go to the house from the nearby motel where they were holed up. Ed is forced to do the exorcism himself and Lorraine insists on helping and ghosts are all over the place and everyone almost dies but no one does in the end.

The movie ends with the Warrens getting a tip about another evil house on Long Island – a nod to the Amityville Horror house they imagined into being as well. Slick. 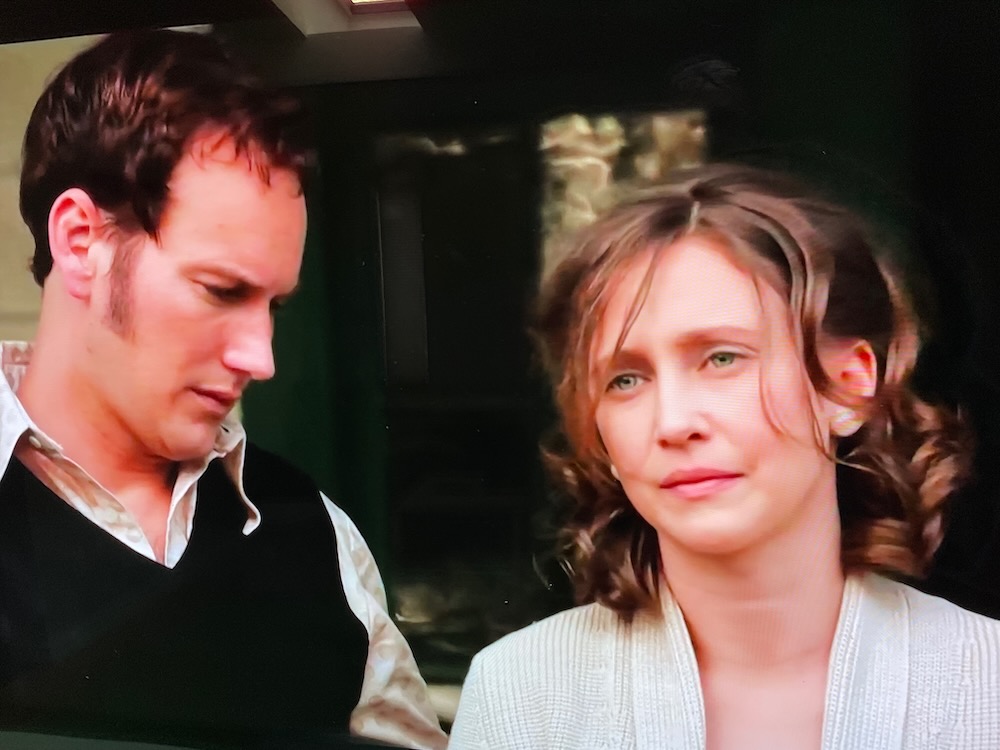 As far as horror movies go, let alone “Connecticut horror movies,” you could do far, far worse than The Conjuring. (Yes, I know, it took place in Rhode Island, but the Warrens are pure Connecticut and a good 20% of the movie was ostensibly in Monroe… though the entire movie was shot in North Carolina.)

The movie isn’t gory or gross and the scares – both the jumpy type and the atmospheric type – are well crafted for the most part. The special effects are pretty good, and the scary scenes are pretty scary and not too hokey or gross. 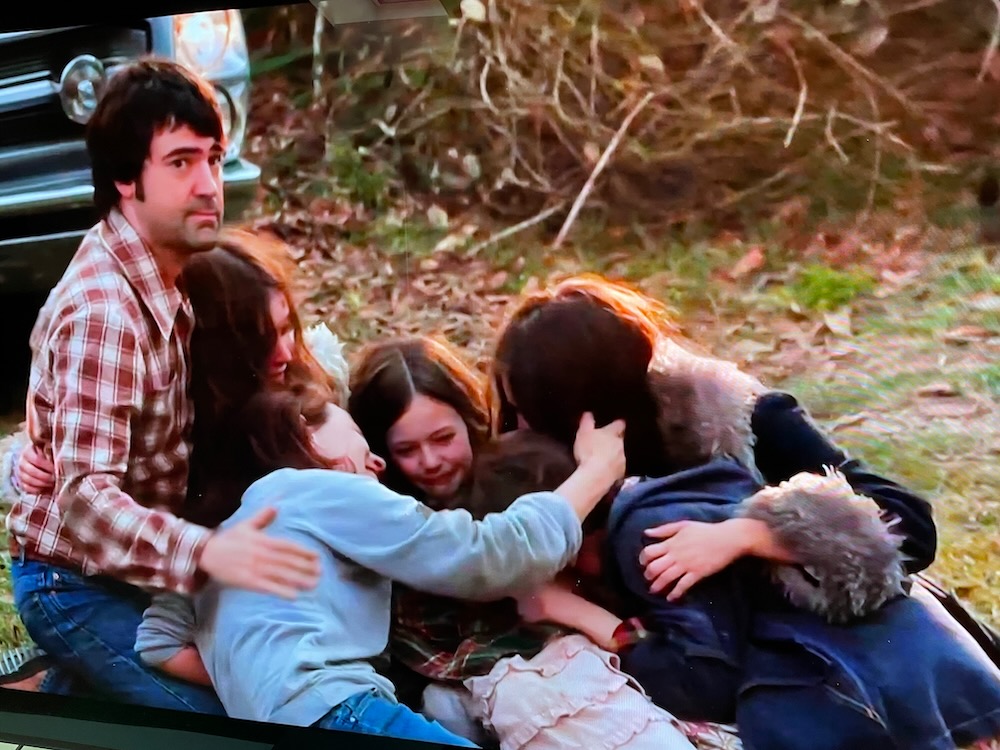 When I look past the ridiculousness of it all, I’d have to give The Conjuring a tepid thumbs up. I was impressed that there was actually some skepticism on the part of the Warrens when the Perrons first approached them, and I rather liked that they “researched” pretty thoroughly to “prove” the possession angle.

Eh, I’m not saying this is a good movie, but if you’re into this stuff, it’s not bad at all. That’s the best I can do.

CTMQ Rating: 3 out of 5 thumbs up
Connecticutness: 66 out of 169 Nutmegs
Filmed in Connecticut? No
Wealthy Caucasian with a Big House? Wealth, no… big house, yes 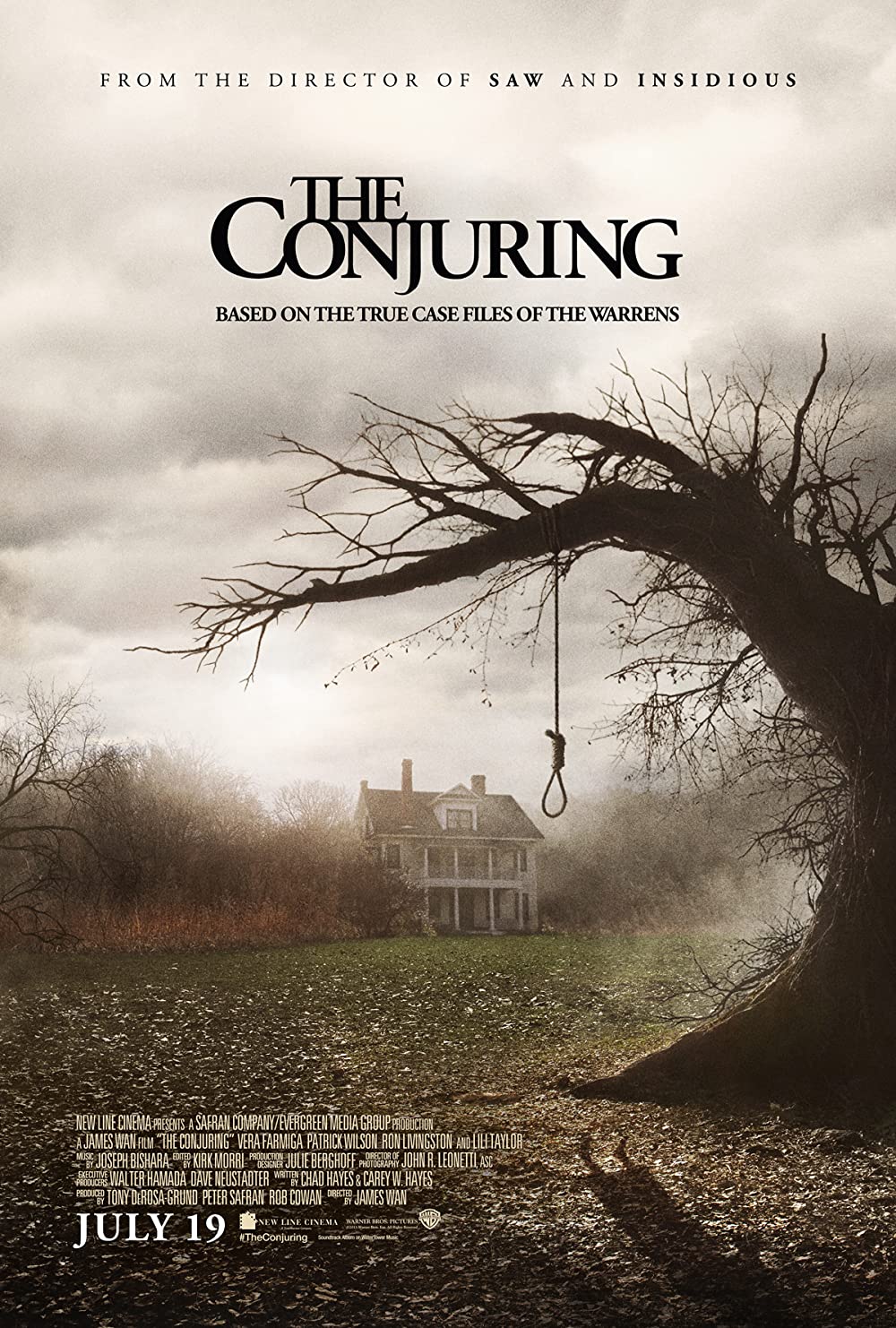