COVID almost closed this museum for good in 2020, but Sacred Heart University stepped in and assumed management of it. During the 18-month closure, it was renovated by the University and it it reopened in 2021 as The Discovery Science Center & Planetarium.

I’m mildly curious what the COVID-forced renovation did for this place. All four of us really enjoyed our visit in 2015 and while there was some poor usage of space – evident in some of the pictures below – I found it to be a fun, educational, clean, and very interactive museum.

I can only assume that it’s now really, really cool. I hope. 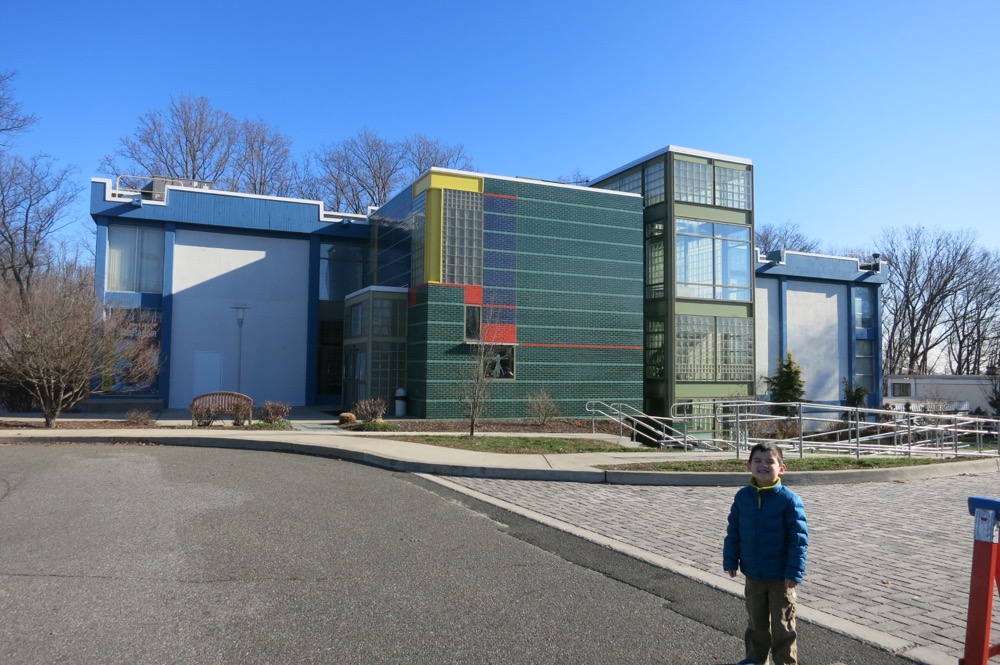 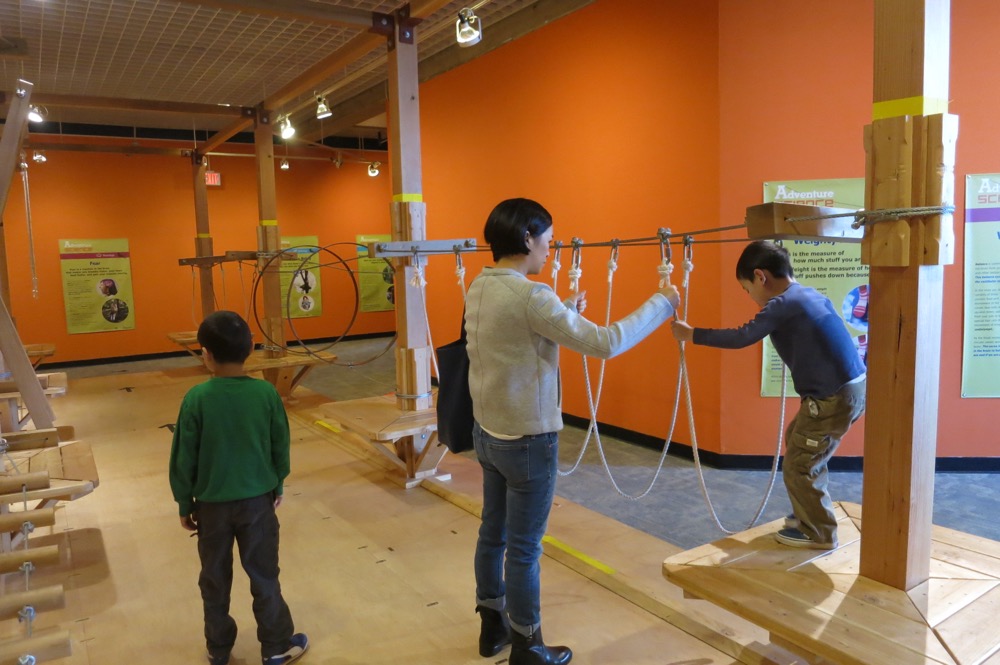 I could argue that if you have younger children, a day in Bridgeport might be the best day you can have in Connecticut. Beardsley Zoo, this place, the Barnum Museum…

The Discovery Science Center was opened in 1962 as the Museum of Art, Science, and Industry (MASI). Discovery Science Center has offered interactive learning opportunities to generations of local residents. It reminds me, in a way, of the Stamford Museum & Nature Center which has a smattering of everything: science, natural history, art, town history, etc. Must be a Fairfield County thing. 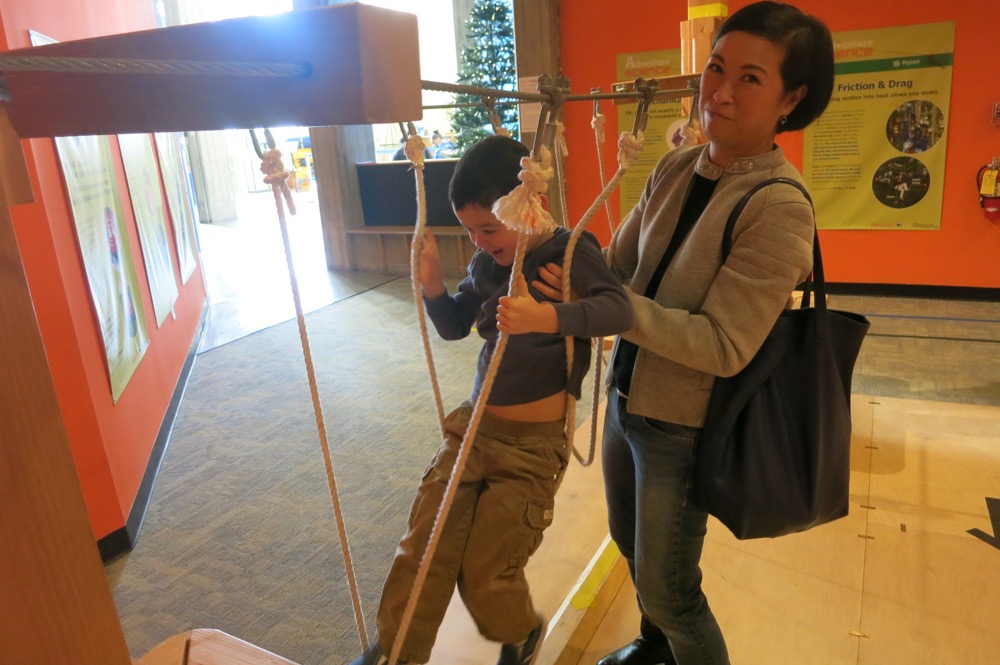 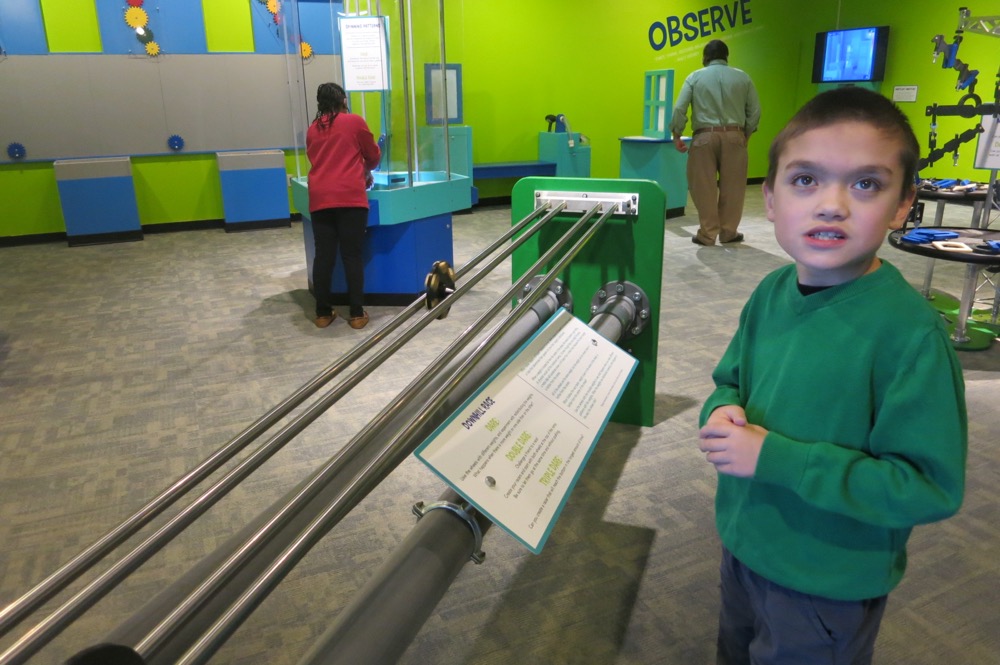 However, at the Discovery, the focus has shifted away from the fine arts a bit as it has become a regional science center. I hope they don’t totally lose that aspect, as the small local artist galleries here were a highlight for me.

The exhibit at the time of our visit was titled Nikon’s Small World: Recognizing Excellence in Photography Through The Microscope. The photos were beautiful, fascinating, and kind of trippy. 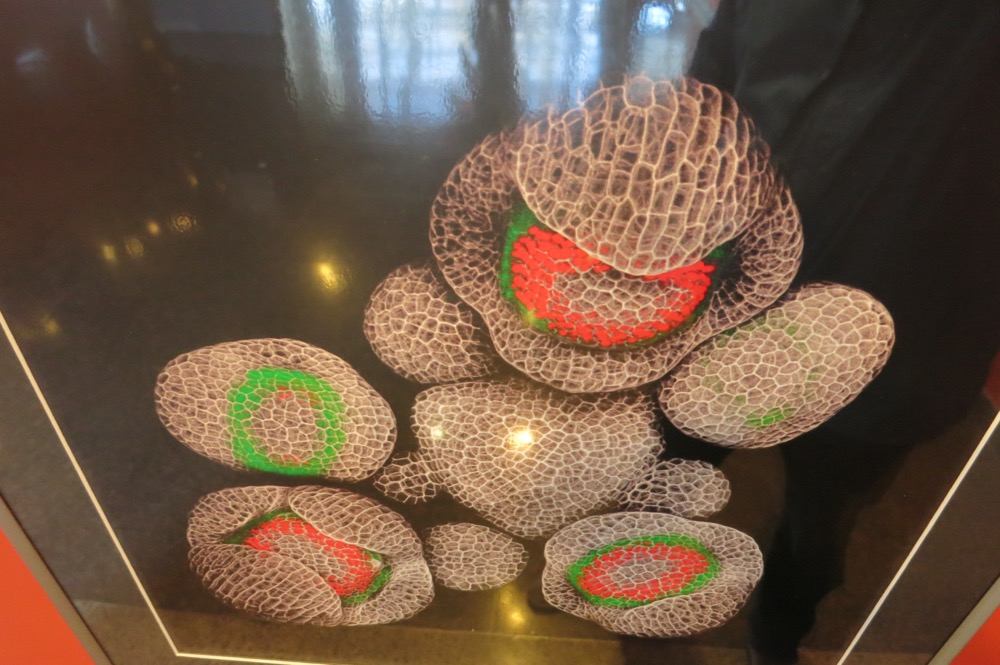 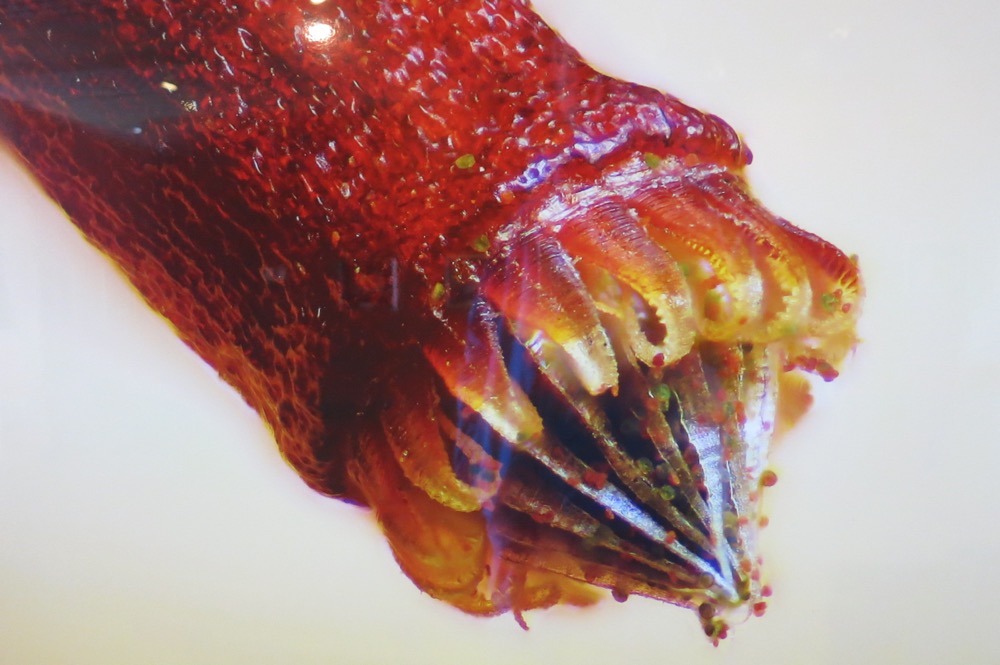 See what I mean? Those are a moss spore and young buds of some flowering plant. I spent a lot of time marveling at these photographs while my family was off doing the stuff most people do here.

Or used to do here. I can’t be entirely sure that everything we experienced in 2015 will be there if and when you go after reading this page. I hope most of it has remained, because both of my sons loved it.

Calvin loved the physicality of the “play” spaces; the ziplines and rope obstacle courses and everything of that sort. I see that they’ve retained an exhibit called Science at Play and I can only assume that is this stuff. 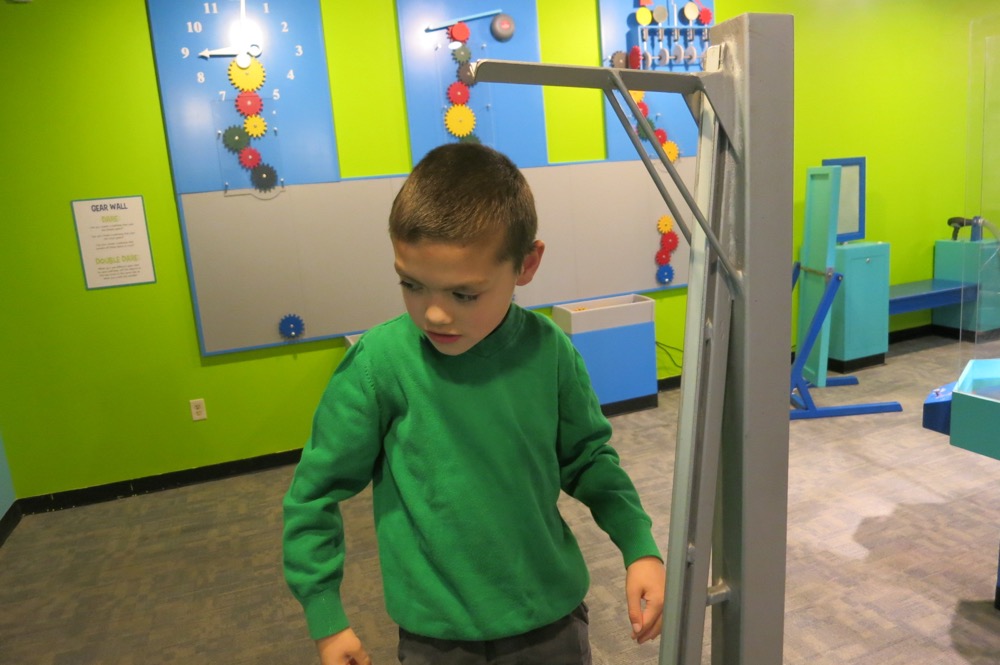 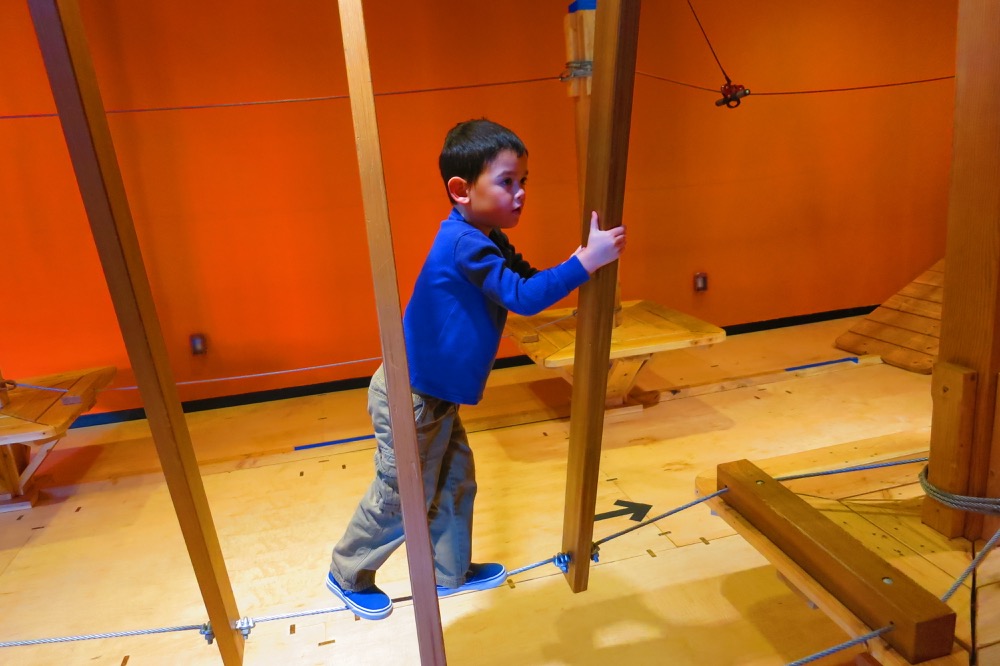 As for my non-physically inclined special needs son who can’t get enough of Rube Goldberg and “action/reaction” type stuff, The Discovery has that in spades. Science in Motion is where it’s at for sure.

The “problem” with these types of spaces is that Damian never wants to move on from them. This is his jam. His bailiwick. And as his parents, we are always over-the-moon when Damian’s enjoying himself away from his self-imposed laptop-and-headphones bubble. 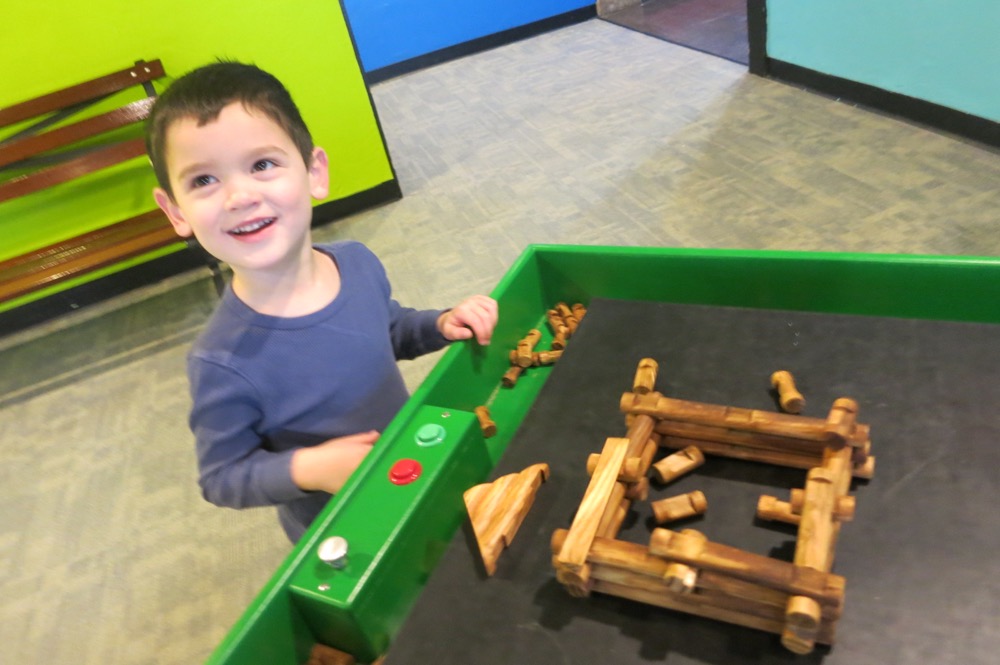 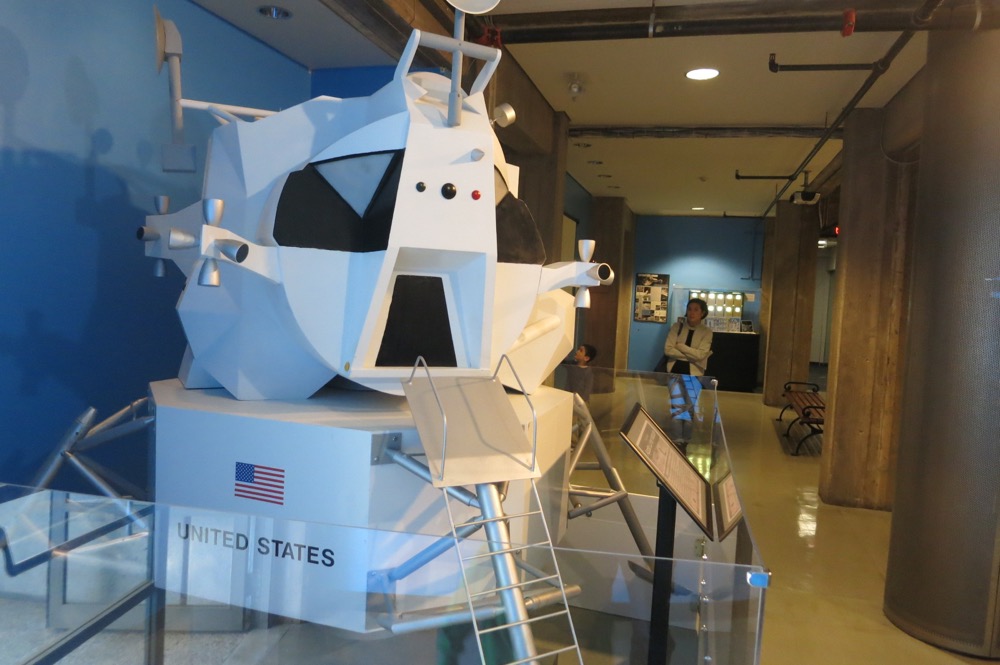 I’m certainly not suggesting only developmentally delayed kids would enjoy these exhibits! Calvin loved them too and so will your kids. I’m saying that Damian would get “stuck” in these rooms at 16 and at 26 and at 56.

One thing I really liked here is that the museums Science in Flight exhibit area – which also had a bunch of activities that both of my sons enjoyed – minced no words when it came to the “debate” about who was the first person to fly a plane. They just put it right out there: 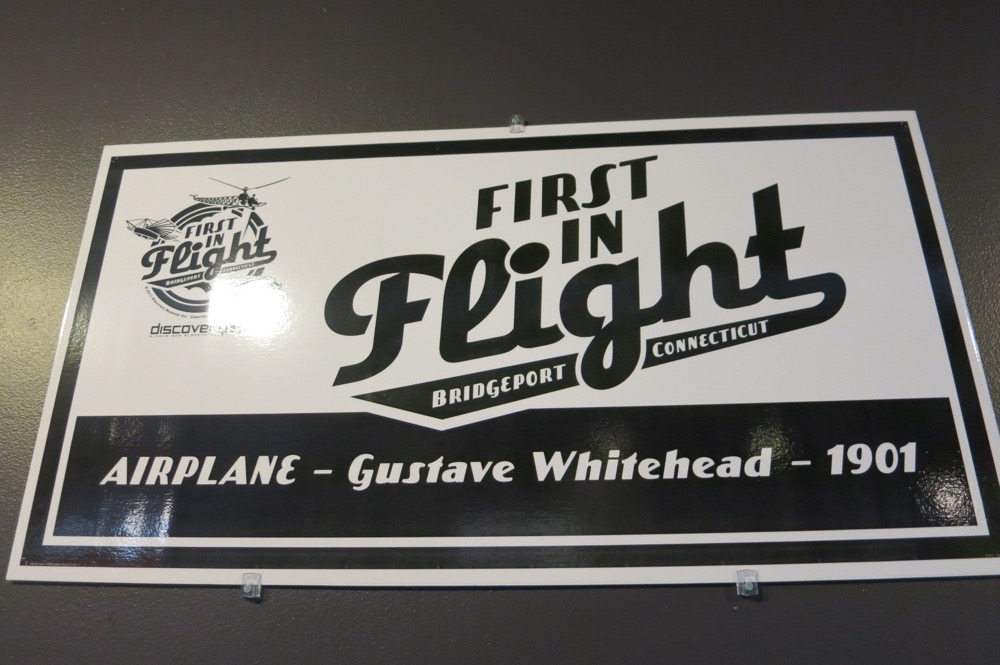 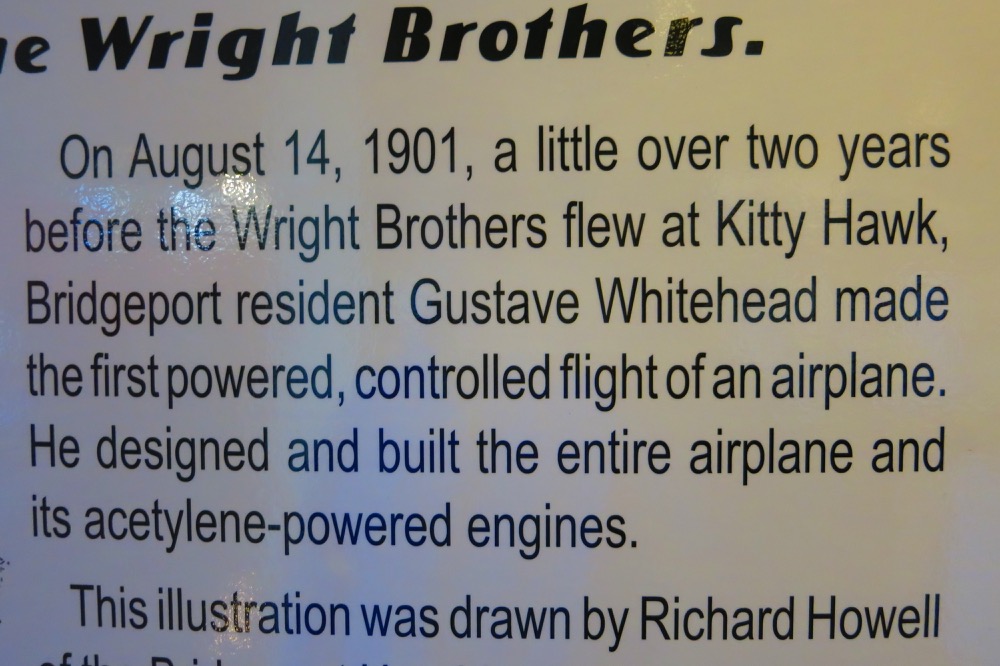 I’m not going to get into this here, but Bridgeport hangs on to this Whitehead claim tightly despite the world moving on from it decades ago. There is some truth to it of course, but history can be a cruel mistress and no one outside of pockets of Connecticut has heard of Gustave Whitehead while every 10-year-old knows about the Wright Brothers.

I applaud the Discovery Museum for sticking to their guns. And for keeping all the interactive displays with moving parts in working order. We’ve experienced too many broken down or nonfunctional exhibits like these over the years to count. I think everything at the Discovery Museum that we wanted to work… worked. 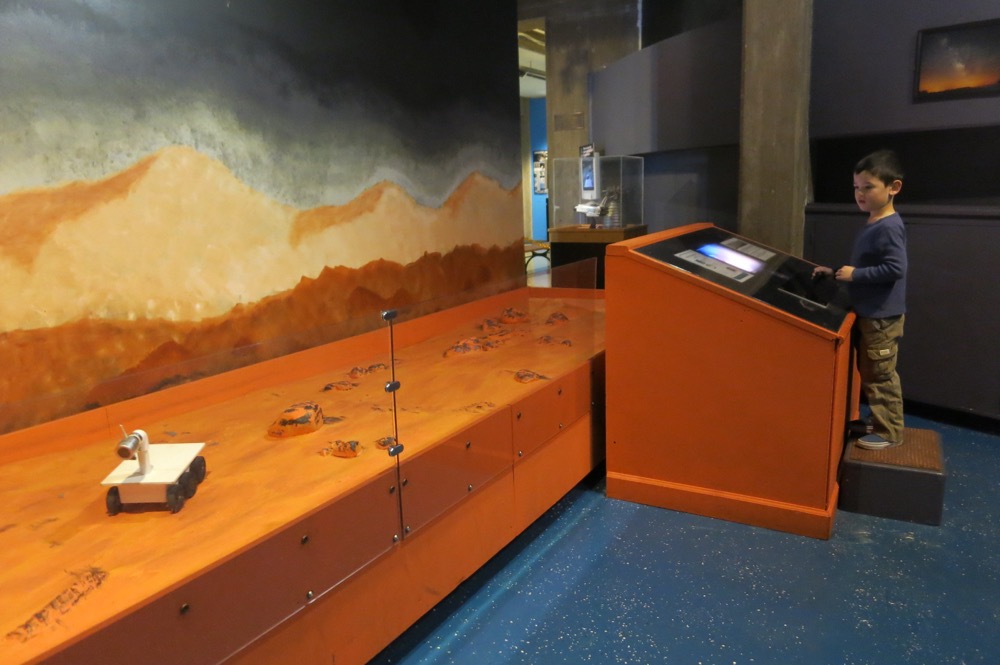 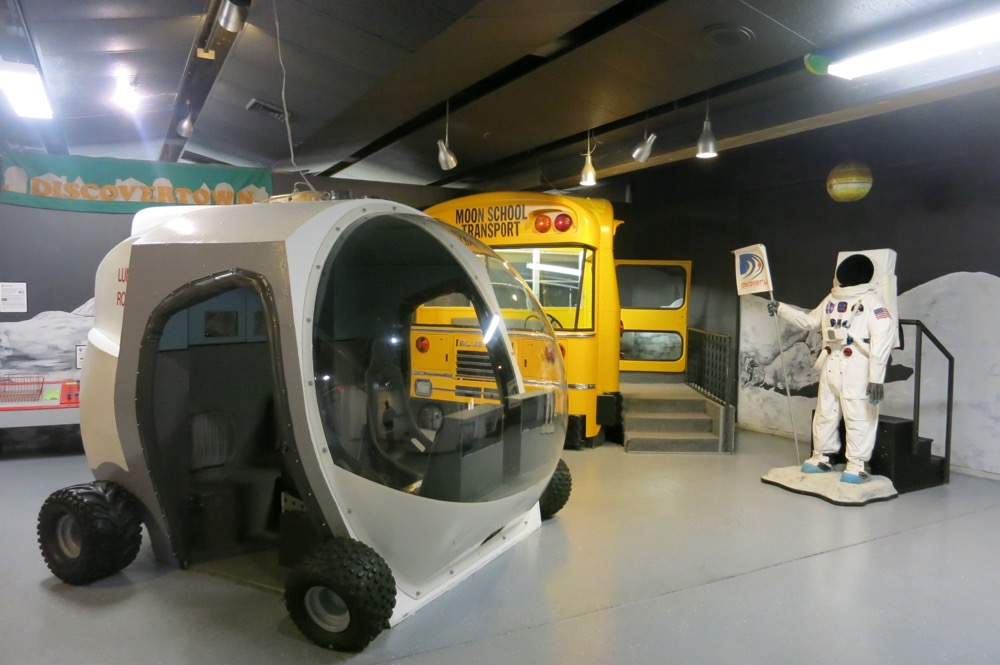 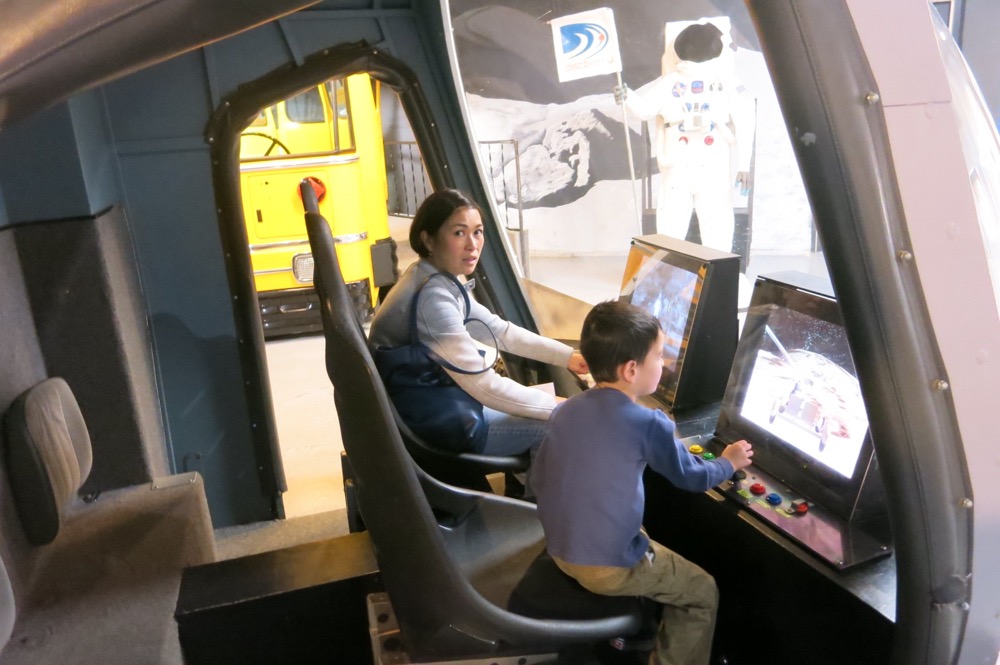 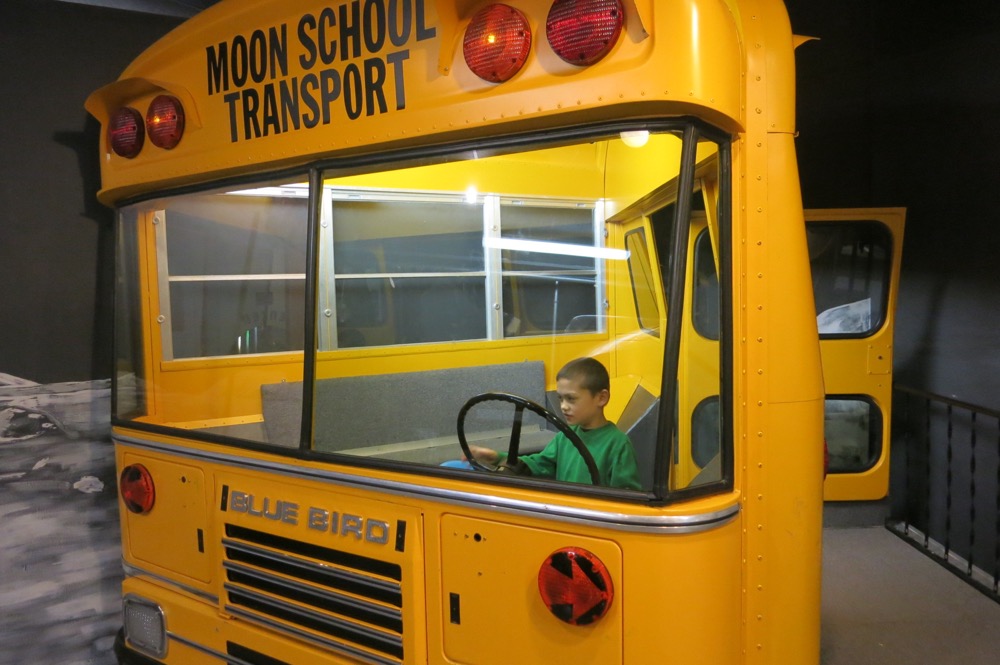 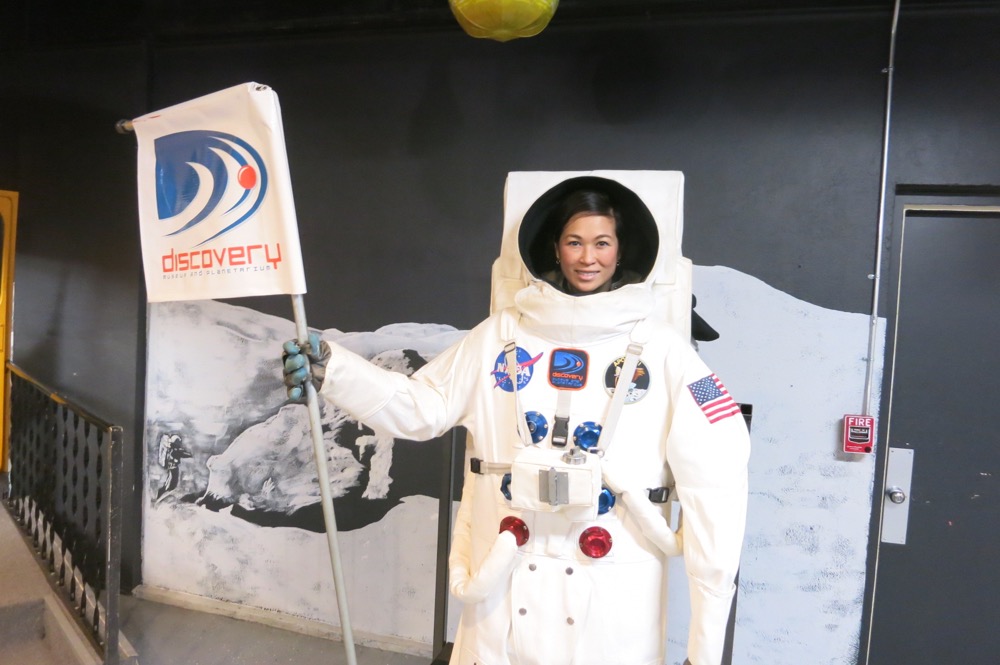 (Man, Hoang was into it! So many pictures of her being the doofus she is at heart… I love it!)

And now that they’ve gone through an entire renovation, I would imagine that has continued. We moved on to the Space Exploration area which is fairly extensive here. We “traveled” from the Big Bang to modern space exploration and travel in this gallery featuring interactive and authentic artifacts to help you get immersed in the vast history of the universe.

Lunar landers, Mars rovers, a “mission control” board… and lots of information on the planets, space travel, and the universe. Good stuff. There’s also the Henry B. duPont III Planetarium: a digital full-dome theater. The Digistar 7 system by Evans & Sutherland transforms the planetarium into a virtual starship, creating real-time visualizations that transport viewers to other planets, star systems, and beyond. 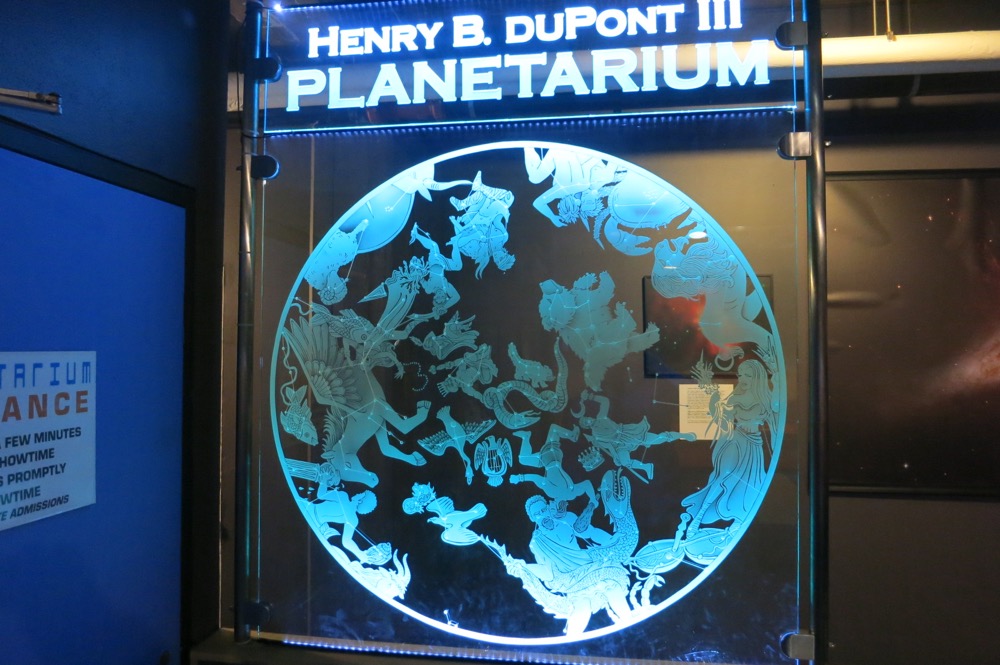 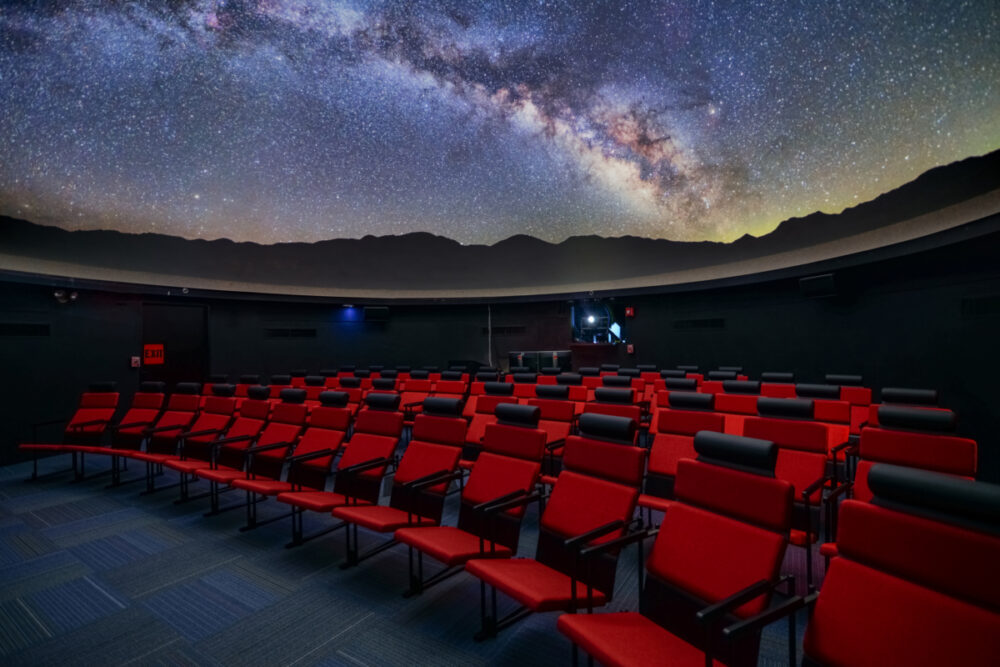 More? There were LEGO bricks and Lincoln Logs to build structures in an attempt to survive an earthquake. I enjoyed being able to tell Calvin that I used to love Lincoln Logs when I was his age and for him to tell me I was boring… but then upon forcing him to build with the wooden pieces, he started to appreciate the timeless quality of Lincoln Logs. Spoiled brat.

As you can see, are were a lot of exhibits here exploring different principles of physics. Lots of that action/reaction stuff I’ve mentioned. At times it felt like this place was built for my two sons. And while one of my sons is assuredly unlike your charges, that won’t matter. The Discovery Museum is simply a well thought out and wonderfully put together children’s science museum. 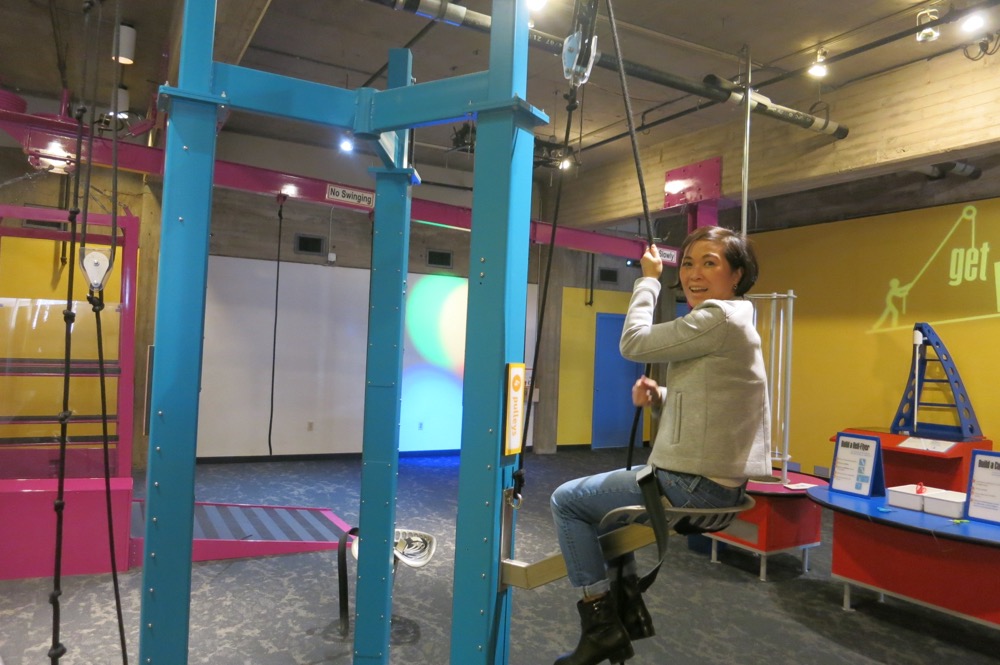 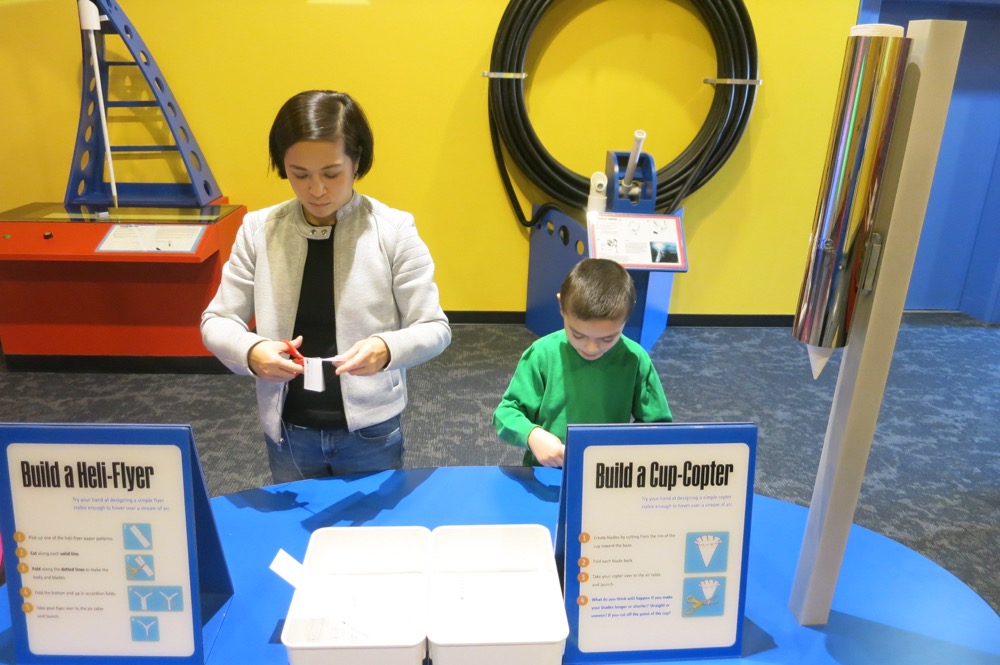 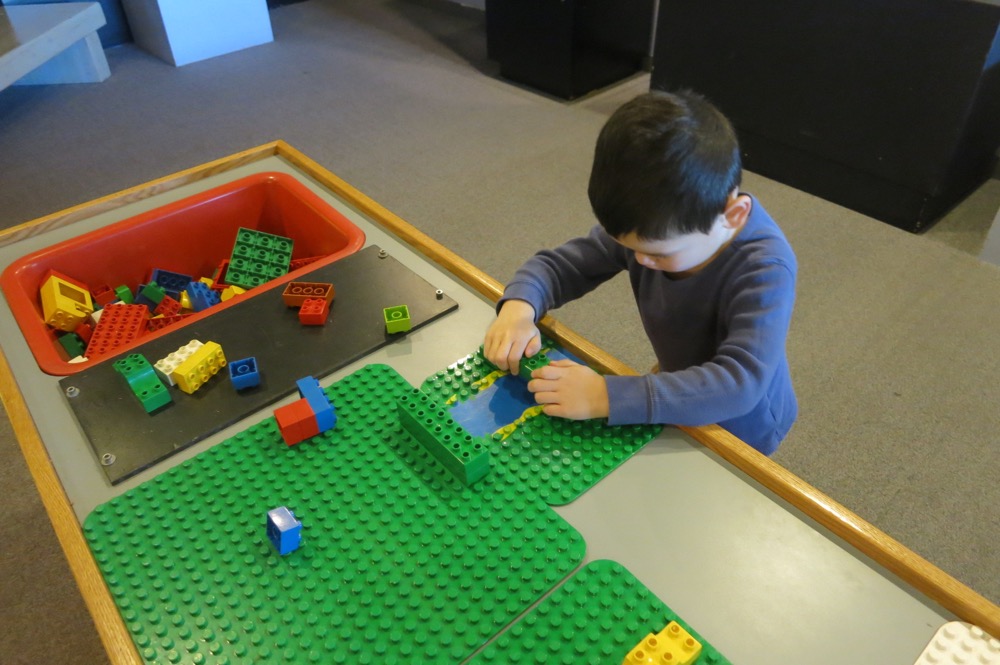 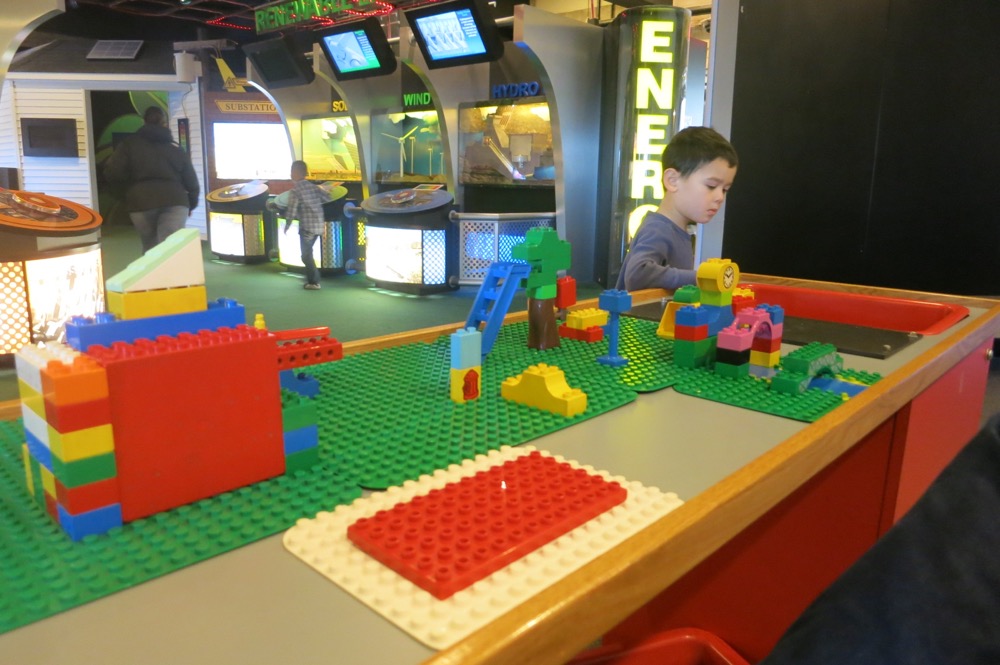 It’s not too wordy, but conveys plenty of scientific principals with an appropriate amount of fun. There’s no natural history or biological concepts explored here, but that’s fine. That’s not who the Discovery is. They offer immersive programs running a Mission Control for a space shuttle flight and deeper dives into certain concepts for older kids as well.

We spent a long time here and yes, we learned some stuff. It’s great that Sacred Heart saw it in their sacred heart to help this place out and keep it going for future generations. It’s a true gem. 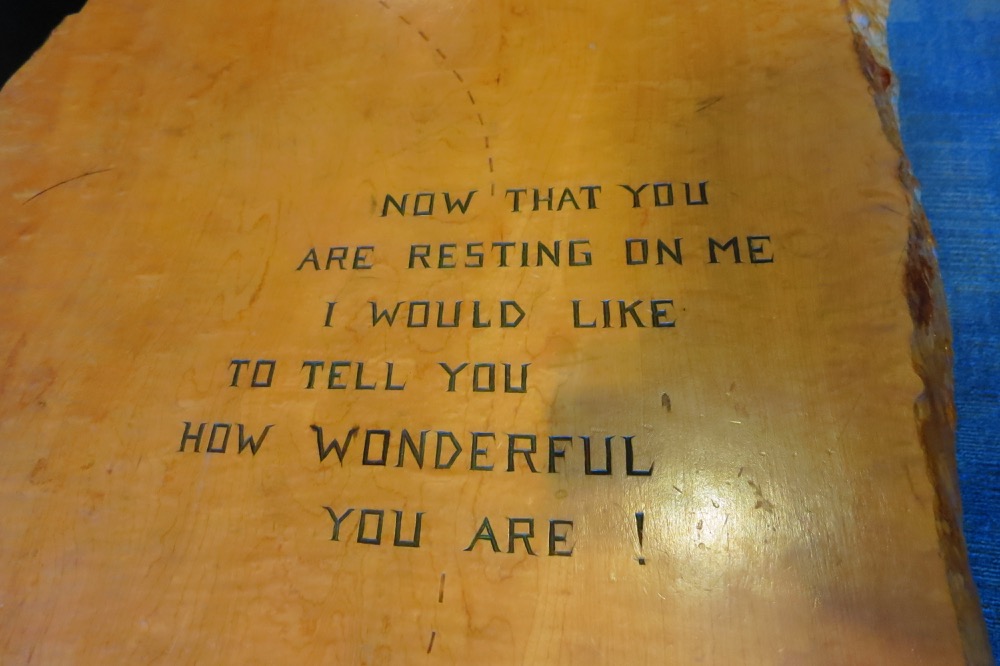 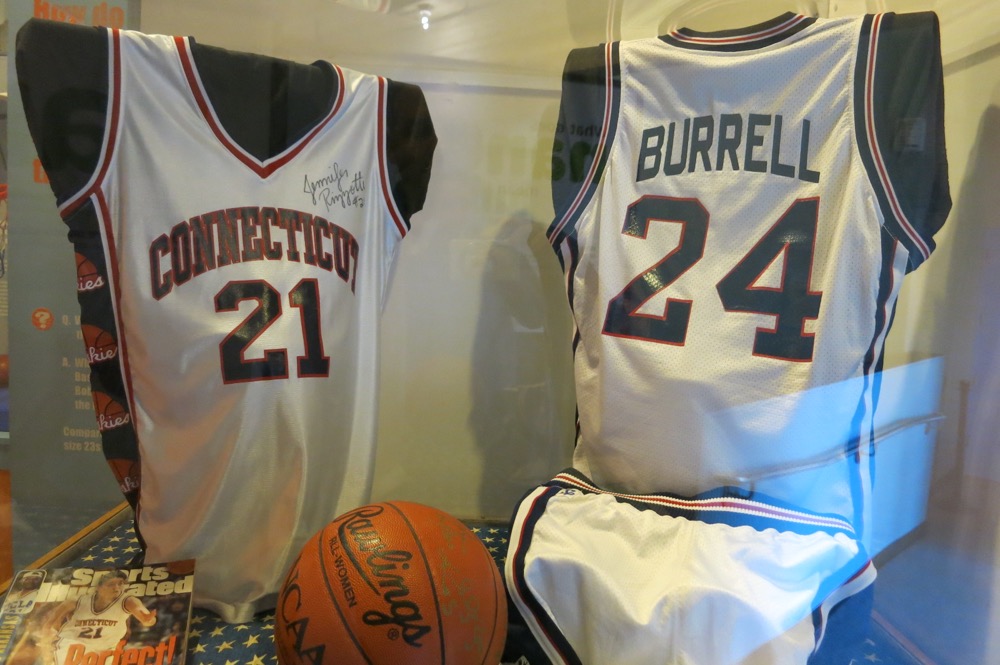 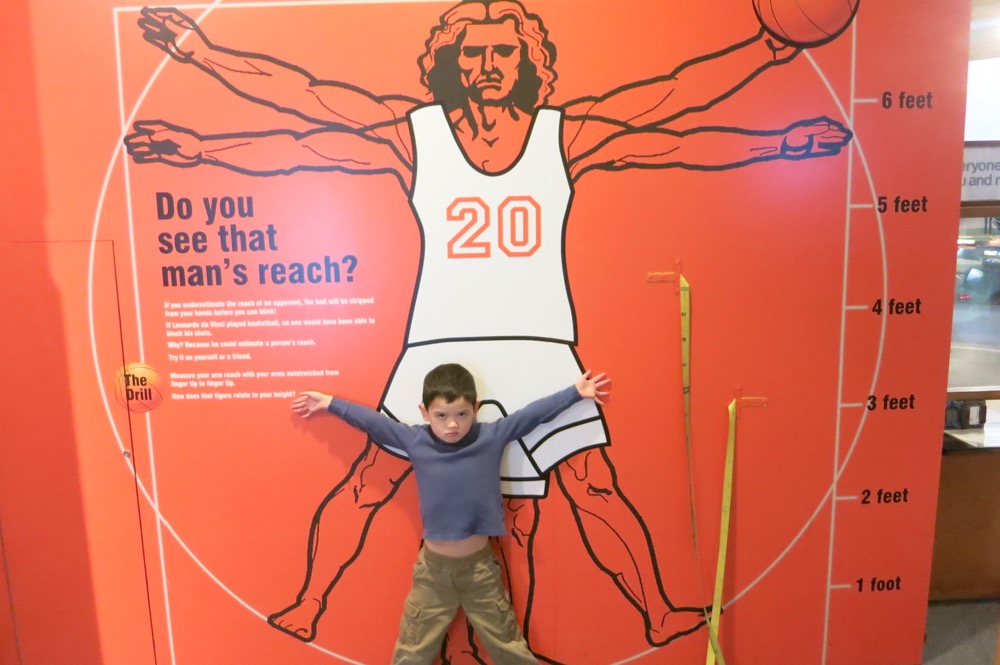