[Note: Most of the informational and historical passages in this post is excerpted directly from the Enfield Historical Society website.]

Enfield. Good ol’ Enfield. What better place to settle your quirky religious community than in Enfield? There is apparently something about their choice of settlement that is preferred by those who prefer to be left alone – because now in 2009 this former community is the site of Connecticut’s largest prison.

If you feel this page will bore you, watch this instead. Jerry Lee Lewis was quite excellent. 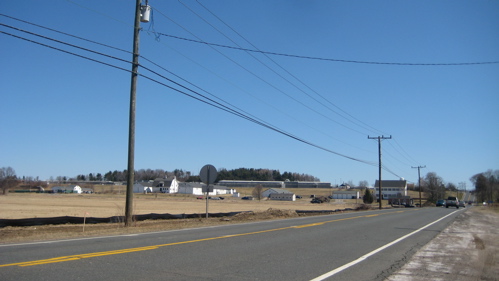 This is as close as I felt comfortable taking a picture of a maximum security prison. Those white buildings are Shakerific!

Yes, from 1792-1917, the Shakers made this area near Massachusetts their home. What’s a Shaker? The roots of Shakerism can be traced back to a small religious group who fled from persecution in France. In London, England they gained converts from the Quakers and Methodists. The new group, led by James and Jane Wardley, became known as the United Society of Believers. They believed in direct communication between man and God. Their religious meetings emphasized this communication. Members would sit in silent meditation until they received a sign or “vision” from God, at which point they would start to tremble, shout and sing. This behavior led their detractors to nickname them “shaking Quakers” or “Shakers” for short. The Society adopted this name officially and it soon became synonomous with quality and integrity.

Back in England, a woman named Ann Lee became a major proponent of this new religion. At one point while imprisoned, she envisioned the sin of Adam and Eve in the Garden of Eden. From this vision came one of the basic tenets of the Shaker religion: no one living in the sin of gratification of lust of the flesh could be a follower of Christ.

I repeat, a maximum security prison now uses some Shaker buildings for offices. Ann Lee is shaking in her grave.

In the 1780’s, Ann Lee convinced a bunch of people she was the second coming of Christ (of course). They were persecuted from time to time, but still somehow gained followers and survived. This, in spite of the fact that procreation was pretty much forbidden. Yes, I’m afraid the Shakers had a short shelf-life. 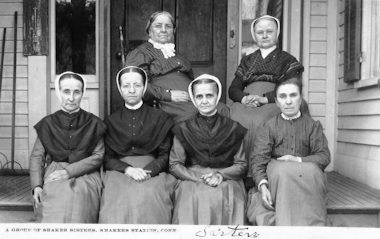 Hm. Celibacy probably wasn’t too much of an issue for the Shaker men. (Photo from the Enfield Historical Society Website)

With some help from a Shaker community in New Hampshire, the Enfield enclave got settled. The Enfield community grew to a total of five families, the North Family, South Family, East Family, West Family, and – at the center – Church Family occupying nearly 3,000 acres of Enfield land. The leadership of each family consisted of two elders and eldresses, two deacons and deaconesses, and two trustees. The elders and eldresses were appointed by the Church Family ministry, while the others were appointed by the elders and eldresses of each family. At its peak in 1855, the Enfield Shaker community had between 35 and 40 members per family. The elders/eldresses were responsible for the spiritual and physical well being of their family, while the deacons/deaconesses were responsible for the family’s domestic needs. The trustees were responsible for all business transactions with the outside world.

The Enfield Shaker community prospered during the first half of the 1800s. A thriving seed business founded in 1802 provided a sound financial foundation for the community. Sales of manufactured goods, ranging from bonnets to furniture crafted with the legendary Shaker quality and simplicity, also provided income. Many buildings were built, mostly of wood construction, although some, like the last great dwelling house built in 1876, were of brick. The Shakers received numerous visitors, some of whom were converted to the Shaker religion. Being a celibate religion, conversion was the only way to add new members. Children of the poor, as well as orphans, were taken in and cared for by the Shakers, but were not required to join the community as adults. 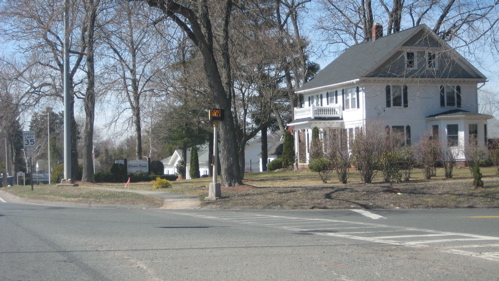 During the second half of the ninteenth century the Shaker community began to decline. The religious, economic and social conditions that drove many people to join the Society in earlier times were changing rapidly. One by one the Enfield families merged as declining membership made them too small to operate independently. In 1913 the North Family was disbanded, leaving only the Church family. In 1917 the last eight Shakers in Enfield sold the remaining property and moved to Hancock and New Lebanon.

Today only a few buildings remain, including some South Family structures that are privately owned and may someday be open to the public. The remainder of the surviving Shaker structures are on the grounds of Connecticut Department of Corrections facilities and are not accessible to the public.

Which, by the way, makes taking pictures of the remaining buildings a bit sketchy. All around the prison are signs saying “No stopping” and “State of Connecticut Private Property” and essentially, “Don’t you DARE take any pictures or we’ll hunt you down for questioning.” I took the risk. For you.

Shaker Village is part of the Connnecticut Freedom Trail. Since you read this, you needn’t really read this. Just buttoning everything up.

They were good at furniture making too. I guess that’s what they are most known for today.