This page is more about the unique museum-like quality of The White Horse rather than the food, sorry.

I will never not CTMQ (Chuckle To Myself Quietly) when Connecticut’s “charming” habit of using quaint village names sort of backfires or simply confuses. In the case of The White Horse Pub, I’ve seen both New Preston and Marbledale used as its “hometown” equally. The kicker here is that Marbledale is the village within New Preston which is a census designated place within the actual town of Washington. 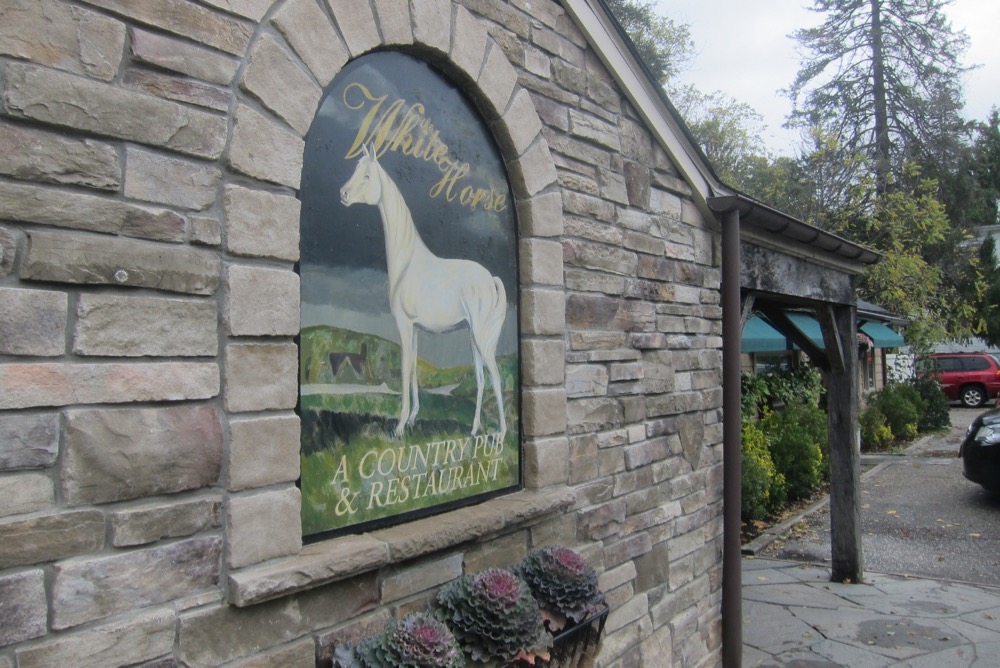 Here at CTMQ, we stick to the classics. The White Horse Country Pub & Restaurant is in Washington. Straight up. And it’s a lovely establishment in one of Connecticut’s prettiest towns. I’ve eaten here a couple times over the years, but have only had quick lunches at the bar.

As such, I can’t really dive into anything about the fancier restaurant dinners and such that many people come here for. (But really, as I am not qualified nor competent writing about food, that’s fine.) To me, the reason The White Horse makes it onto CTMQ is for its collection and presentation of artifacts – as good as the food may be. 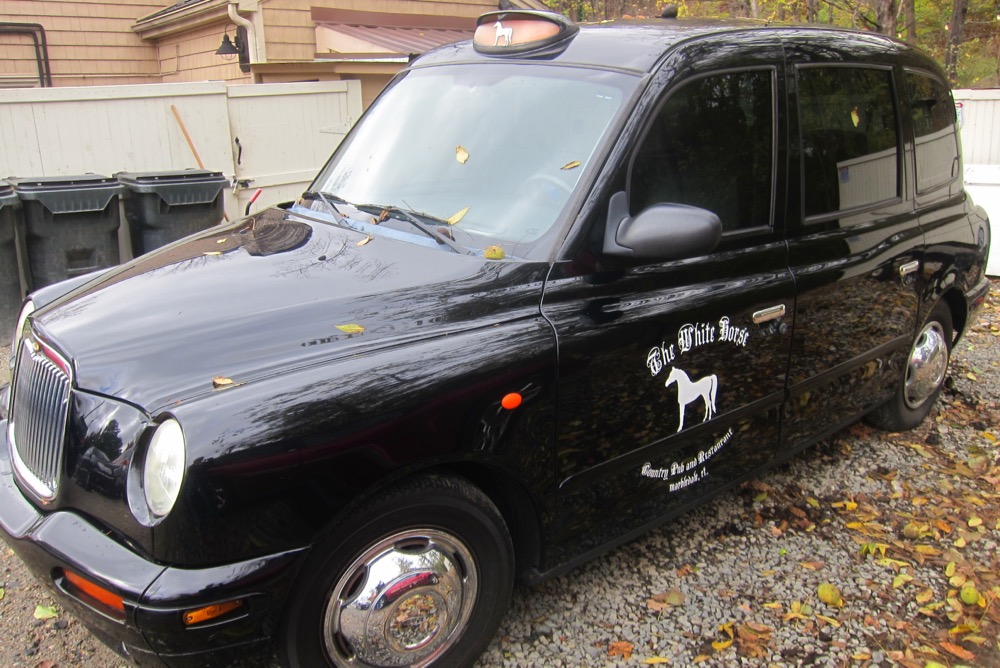 The White Horse is British. Opened in 2009, it is owned and helmed by John Harris, a British expatriate, along with his wife Lisa. Mr. Harris loves British… stuff. And white horses. As such, this place is full of British stuff. And lots of white horses. He has collected a slightly weird and totally random collection that populates every wall, nook, and cranny of this place, starting with the London Taxi that guards the front lawn. A taxi you’ve perhaps seen elsewhere…

Acquired from the ABC TV show ‘Supernanny’, this was Jo Frost’s featured transportation for 7 years, as she traversed America. The Taxi was custom built in 2003 for the show as general import is not allowed. To meet American emissions standards it was especially kitted out with a Ford 4 cyl. Diesel. An Intercom system, Leather seats and twin A/C’s are also part of the features. The same company LTI (London Taxi International) has been building these since 1938 – with very little body design changes in 70 years.

The taxi was loaned to our local PBS station CPTV for “All Things Connecticut” when that English guy hosted that show for a short while. As nice as that guy was/is, I felt that he was such an odd choice to host. 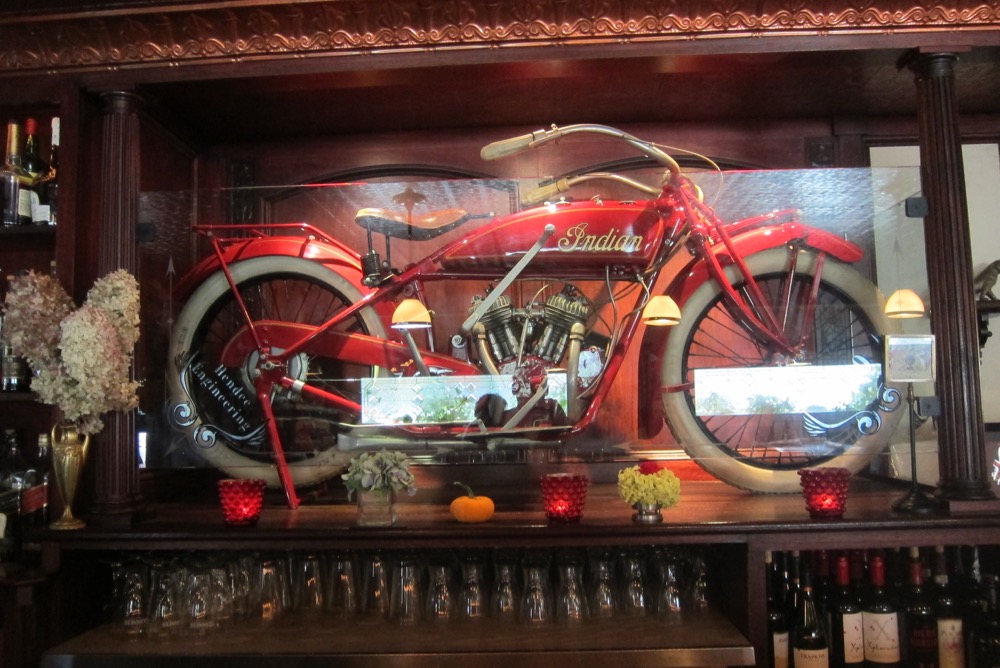 Anyway, The White Horse. According to owner Harris, it’s a mythological symbol of hope in England. And he’s made it a point to make sure that all the horse paintings, statuettes, emblems, etc., here are are unbridled. If that’s true, I give him big points for caring about such a thing.

Harris calls the pub a living museum and created it to become a sort of “local living room.” I think he’s succeeded on both fronts. The White Horse has received all sorts of accolades over the years, generally centered around it being a genuine-ish British pub out in the Litchfield County woods. A true Country Pub. 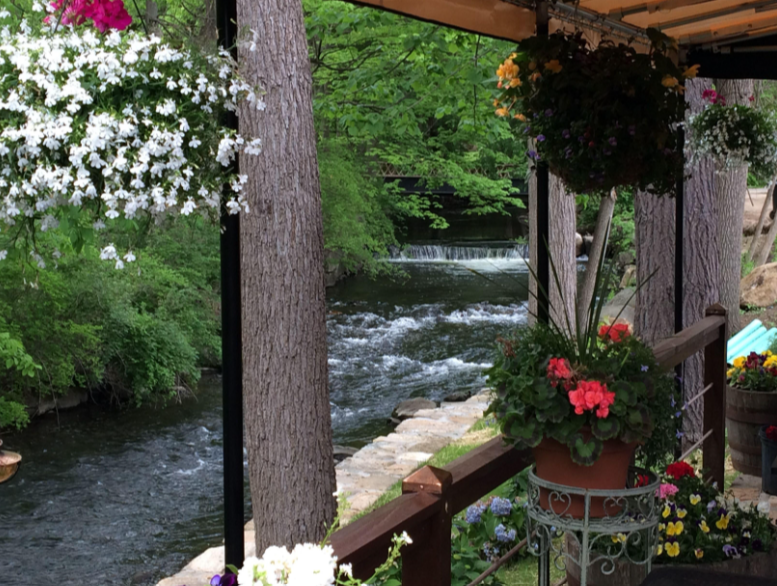 Everywhere you look, you’ll find some old thing. A 1920 Indian Scout motorcycle is perched in glass behind the bar. Harris bought it from a museum in Florida and, well, I guess he rather liked it. It’s not remotely British, but… there you go. (Indian has always been a Massachusetts company.)

My personal favorite piece is the “16th-century tavern table” that sits in the middle of the dining room. All we can do is trust in its provenance I guess. The White Horse claims it has been “in continuous use for over 400 years,” and is from a “Royal Castle.” 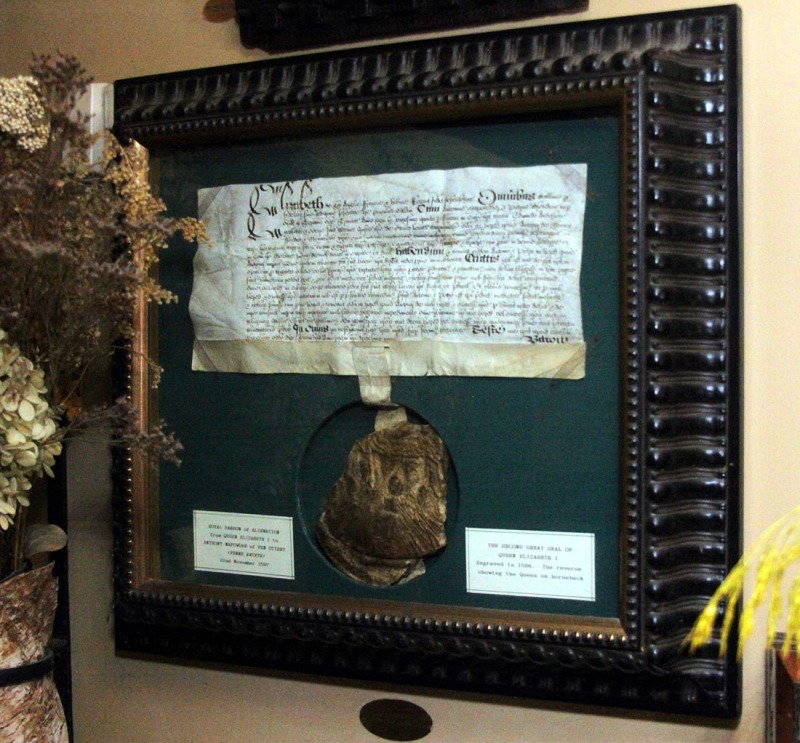 1597 ROYAL PARDON FROM QUEEN ELIZABETH 1 COMPLETE WITH GREAT SEAL
One of only a handful in existence, as carved by Nicholas Hilliard, and used exclusively by the Queen on matters of great importance.- scholarship rights had to be granted to the British Museum – Her Majestys Goverment did insist after all – perhaps the scholars can enjoy a pint of old speckled hen and a signature burger, whilst at their studies.

Ok. What else? I’ll choose some of my favorite pieces… A photograph of the Earth signed by the Mercury 7 crew. That’s cool. A receipt for wine from Charles Dickens. A print signed by Pablo Picasso. A Gandhi signature next to pictures of John Lennon and Martin Luther King, Jr. 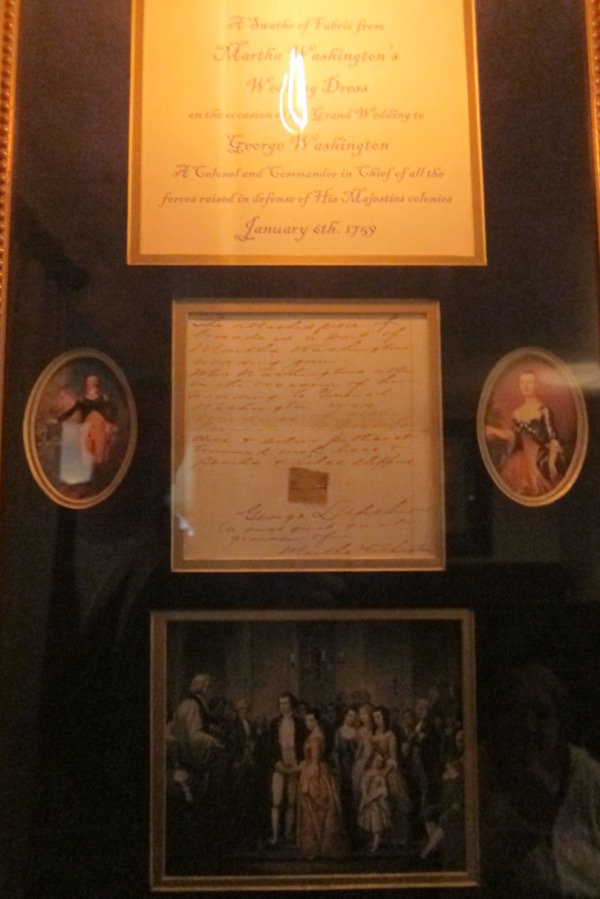 Did I say the collection was random? It’s totally random.

There’s a bunch of old oak furniture pieces and some items claimed to date to the 1200’s. A swatch of Martha Washington’s wedding dress. A note from Winston Churchill. On and on. In an interview, Mr. Harris said that his pub is “The British Museum meets the Hard Rock Cafe.” 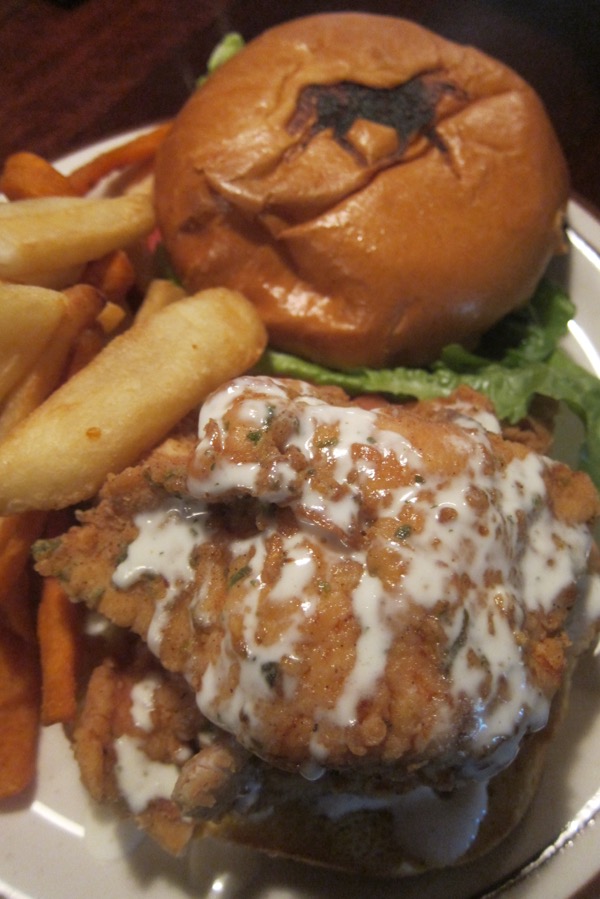 I’ve been to both the British Museum and a Hard Rock Cafe and… the food here is certainly better. I’ll say that. But there is one piece of Hard Rock Cafe-ish-ness: A Fender guitar signed by Mick, Keith, Ron, and Charlie of the Rolling Stones. So that’s cool.

Also cool? The little puff pastry horses they craft on top of their pot pies: 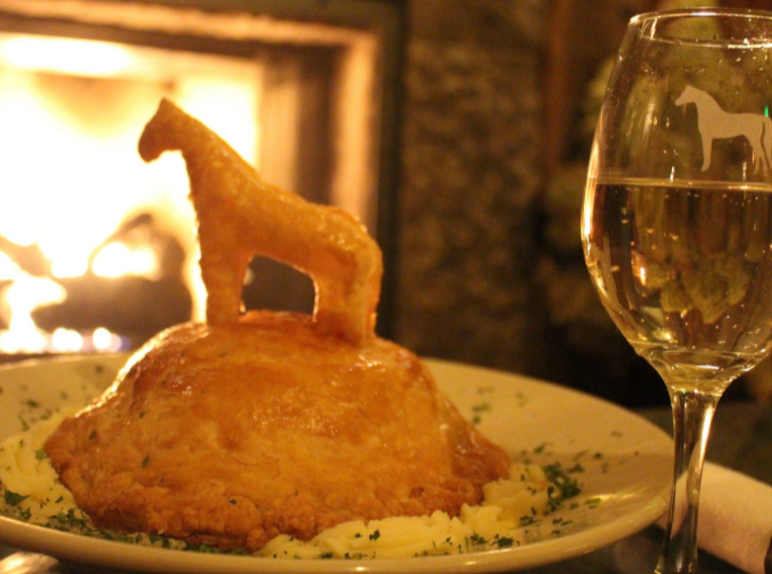 As I’ve said, I’ve only had pub food here and it was fine. I do find it interesting that the menu is a bit more eclectic than you’d expect at a “British” pub or restaurant. Sure, they’ve got their bangers and mash and all that, but The White Horse seems to have embraced some of the Crown’s colonial conquests with its British Raj chicken salad, chicken tikka masala, and Persian lamb koftas.

Hey, good for them for keeping it real. I guess.

The building has a few rooms, including the bar I’ve occupied. There is outdoor patio that overlooks a river and an indoor fireplace. It’s a bit of an architectural mishmosh, but that’s kind of the point here I think.

People love the White Horse; whether for the food or the quirkiness of the collection of artifacts, it’s always on Best Of lists. And now it’s on CTMQ, so they’re doing something right. 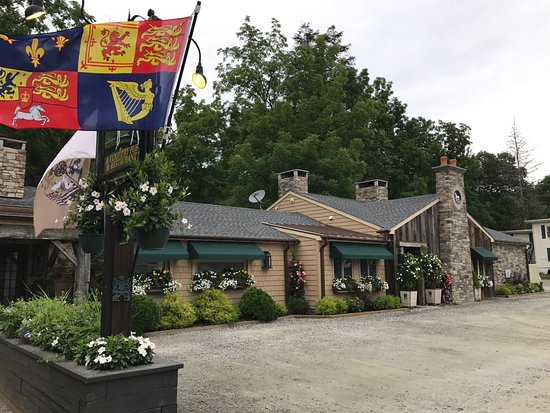