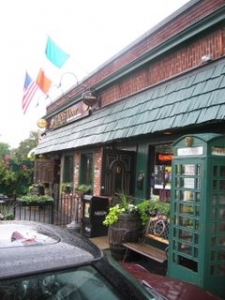 As with most Americans, I’m a bit of a mutt; A Germano-Scotch-English one. I suppose I’m mostly English, but I look a bit more Scottish I’m told. At any rate, I find a part of me cheering on the Brits at this point in the World Cup. We pasty white guys need to stick together.

Sunday was a lovely British morning with fog and rain blanketing the state. Ed and I were to meet up at The Half Door in Hartford’s historic West End (home to one EdHill) to watch England take on Ecuador. For some reason, Americans have an unhealthy obsession with Irish pubs but you’d be hardpressed to find a bar touting itself as an English pub. Why is that? It is a bit odd isn’t it? Ed was a little late, as usual, and I soaked in the scene early. Wow, there were a lot of Englishmen and women there, fully decked out in England jerseys and hats. The bar was packed and most of the tables were taken. Blimey!

Ed arrived and we ordered up some bangers and mash (err, veggie omelets, actually. Which upset me, because I’m liking the World Cup Tour trend of “Ed eating meat” pictures for some reason. I’m sure he’ll make up for it at the churrascaria next weekend. How can he not?) We drank our coffees and watched the game with the increasingly rowdy crowd. 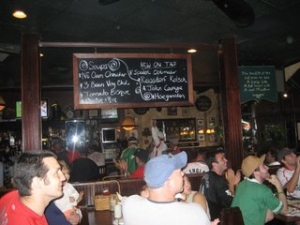 Late in the first half, God’s gift to women David Beckham bent a free kick into the corner and put England up 1-0 for good. It was all quite exciting for the crowd, who broke out in various songs ranging from the Sex Pistols to Anglican hymns. (Perhaps because everyone was missing church, as this was at 11AM on a Sunday.)

At the end of the match, a bit of melancholy overcame me as I realized our World Cup Tour 2006 was nearing an end. Only one more planned stop to make, and that was contingent upon Brazil winning a game (Update: They won, so the Tour continues!) It was the best of times, it was the worst of times as I stepped out into the dreary pall of the Dickensian day. A rat scurried near my horseless carriage and a beggar asked me for some change. I didn’t give him a farthing, but I offered up the quip, “The more things “change,” the more things stay the same.”

(Pardon the out-of-focus interior shots; I didn’t want to scare people away with the flash again. Let’s pretend they’re “artistic.”) 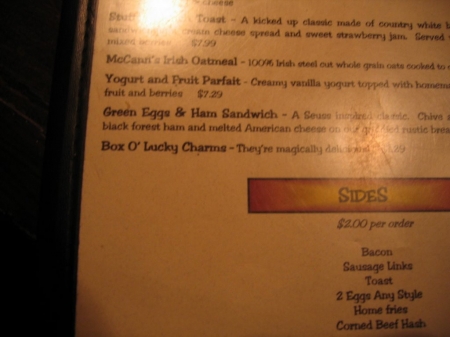 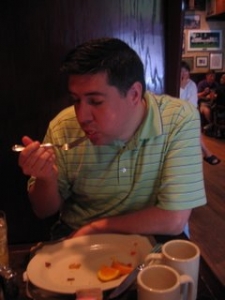 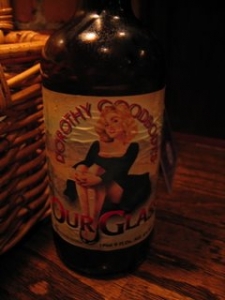 This was the English beer of choice: Dorothy Goodbody. Unfortunately, the beer was overpriced ($8.75) and not very good. 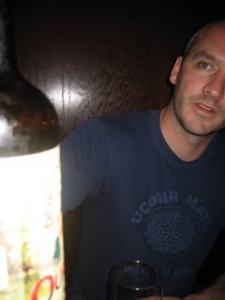 A picture of me looking stupid wearing a nerdy shirt. Happy Ed? 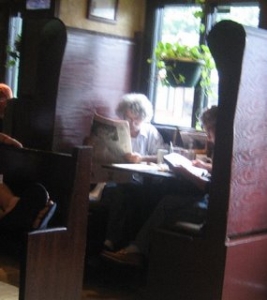 I referenced Dickens above, but I saw Mark Twain at the game! He does live right down the street after all… 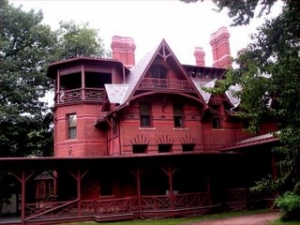 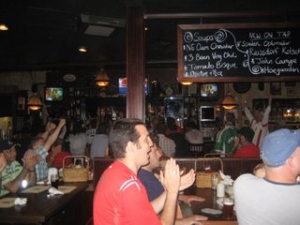 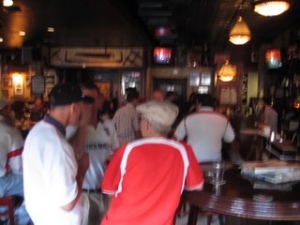 The typical English hooligans stood around and discussed attacking the coffee/martini bar across the street. Oi! 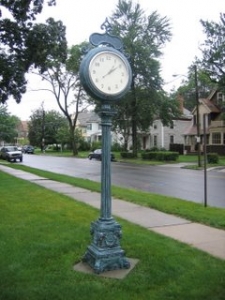 Near the Half Door stands this clock. I don’t know its story, but it strikes me as very British. So here you have it. A bloody clock.

One more stop to make next weekend with Brazil… All Good things must come to an end. For our Tour, and for Brazil.