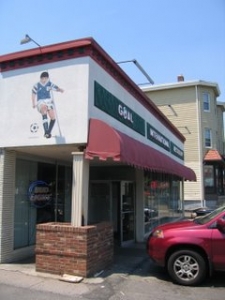 At this point, I’m only writing this blog entry for the sake of consistency. Because our first attempt at a “Brazilian day” was a bit of a failure. Albeit a fun and delicious failure. We opted to watch the game versus Australia on Sunday at Goal International sports bar in Hartford’s south end. The weather was Brazilian-hot, so that added some flavor to the day. Once we bellied up to the bar, it became readily apparent that we were sitting in a Peruvian bar/restaurant, not a Brazilian one. We decided to make the best of it, ordered some lunch, and watched some soccer.

The menu was extensive and the choices were pretty varied. We saw many South American families chowing down on whole crispy fish – which looked muy delicioso, but a bit heavy for a hot summer lunch. I enjoyed a nice Columbiana soda (there was literally nothing Brazilian about this place) and ordered cerviche mixto and pollo salada. Ed went wacky and opted for beef heart skewers and some other chicken dish. No one was scoring or pressuring in the game and the bar crowd was subdued. 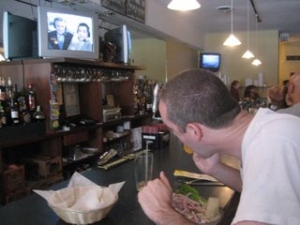 “Holy crap that’s a lot of seafood,” I noted when the waitress finally brought up my HUGE pile of cerviche. Fish, squid, octopus, conch, clams… It was all in there, “cooked” in the acid of the lime juice. What’s more, this “appetizer” came with a sweet potato of some sort, some corn, some real corn nuts which were awesome, bread with a hot aioli of some sort, and a giant piece of yucca which did nothing for me. Ed’s heart dish (yes, I’m serious) was equally gigantic. Halftime and the score was 0-0. I thought Brazil was supposed to be the best?

I simply couldn’t eat my entire “appetizer” and had to toss a lot of it (partially uncooked seafood in a car on a 95 degree day doesn’t appeal to me). Our main courses were even bigger and we hardly touched them. Hey, look at that, Brazil scored – a pretty weak goal if you ask me. We had our chicken entrees packaged up and we watched some more soccer. Whoa! Brazil scored again late, the game ended, and we hit the road.

We should have gone to an Outback Steakhouse to support Australia for this game. Though the Bloomin’ Onion (or whatever) would have been nasty compared to the fresh and delicious offerings at Goal, it would have been funnier. Brazil will be moving on to the next round and I promise we’ll find a truly Brazilian place to take in the action before the World Cup is done. 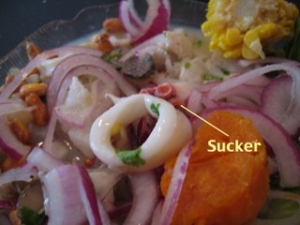 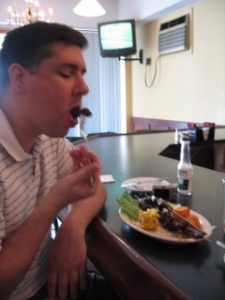 That, mi amigos, is EdHill eating cow heart on a stick. And that’s Ed eating it. 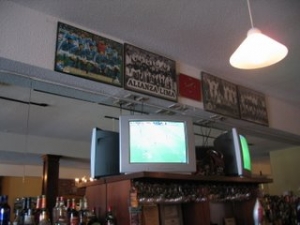 Our first clue that this wasn’t a Brazilian hotspot: Peruvian soccer team photos.

UPDATE: I previewed a Brazilian spot during a later game and it was packed. Here it is from the outside and assuming they win the next round, we’ll be there on 7/1. 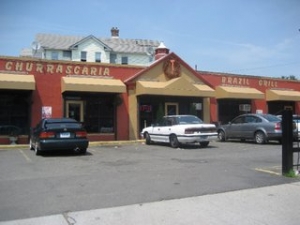 And here it is from the inside: 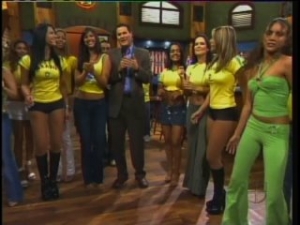 Moving on… The ultra-important USA vs. Ghana game