A week before Halloween. Oogity-boogity.

No big deal going to a place called Devil’s Hopyard then, right? I mean, it’s just an antiquated place-name, and it’s not like there would be any other nearby roads or anything that would instill feel in those affected by myth. 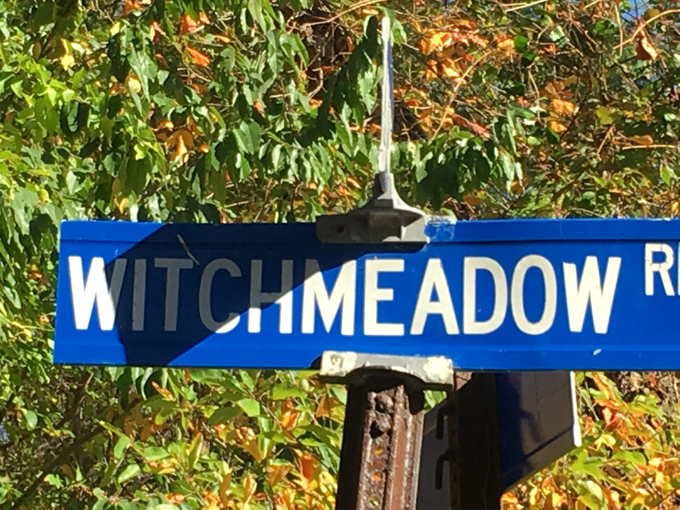 Oh, okay, whatever. So the road off of route 2 is “Witchmeadow Road.” Whatever. Just a coincidence. Won’t be any more like that… 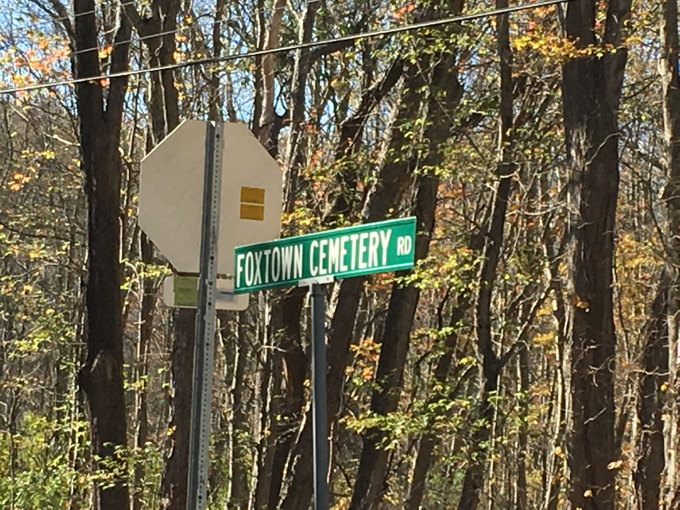 Okay, okay, so the next road was named after a place full of dead people. Witches, dead people… purely coincidental. It’s not like there would be THREE roads in a row on our way to DEVIL’s Hopyard that invoke some sort of… 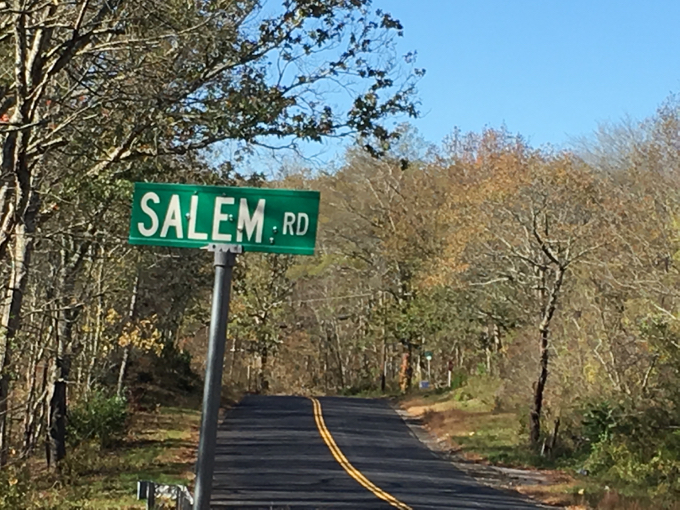 The story of how Devil’s Hopyard got its name is somewhat mysterious. I’ve heard both popular versions and frankly, both are equally believable. What’s important to us in 2016 is that in 1919, the state obtained the land and protected it. It’s a beautiful area. (Funny enough, the main waterfall that most go to the park for is called Chapman Falls, but no one ever calls it that.) 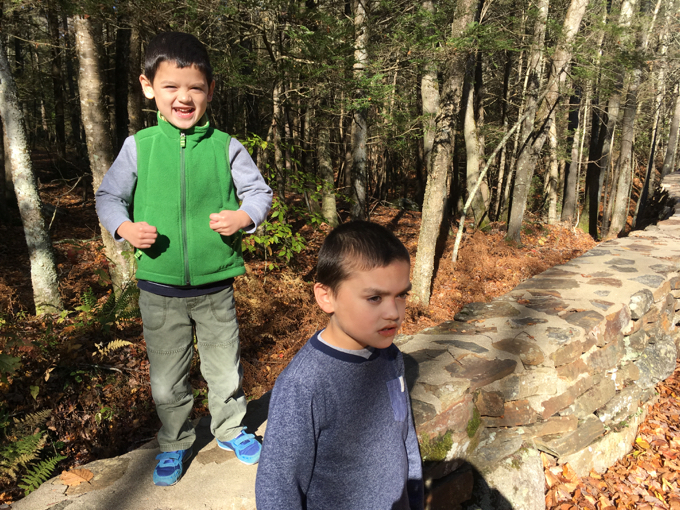 We’ll get to the name derivation(s) in a minute, but for now, we had a hike to complete. I thought I’d be clever and shorten the hike for my sons and park along Hopyard Road and taking a shortcut. (Turns out, this cheeky move was actually a pretty good one, but that’s only because I didn’t fall in the Eightmile River that I had to somehow cross with two little kids. 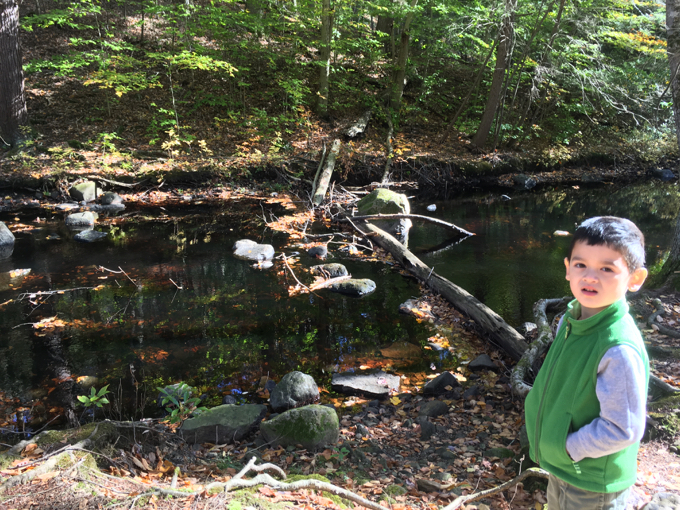 “You want to cross HERE?”

I found a relatively easy crossing and then we scurried up the steep hill to reach the orange trail that would take us to our Sky’s the Limit lookout. 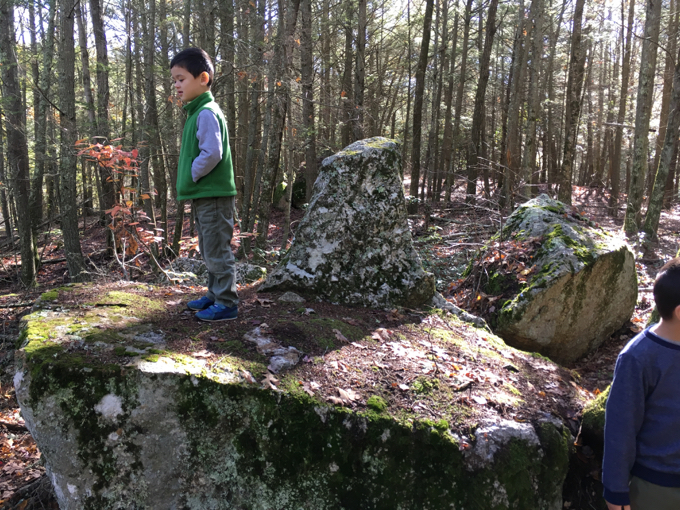 He deemed this “Boat Rock”

Once on the orange trail, we came upon the spur up to Devil’s Oven. It is steep. Like, super steep. Too steep for Damian and too far away for me to leave him behind. We skipped the Oven, but know that I’ll be back someday, as it’s an important addition to my “Satan in Connecticut” list. 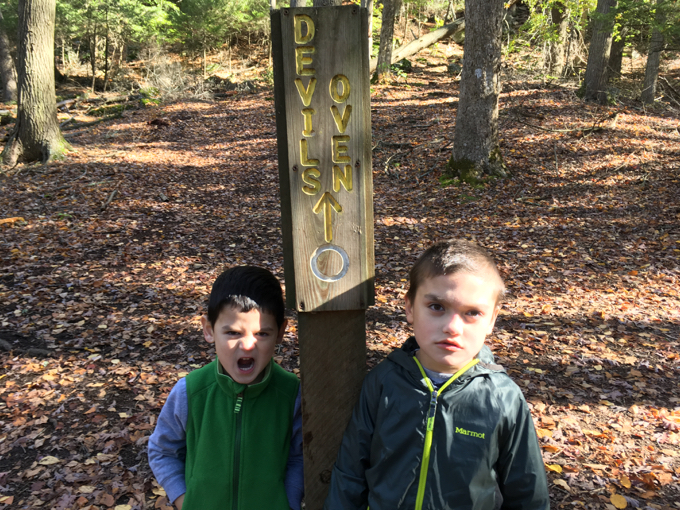 Speaking of “Satan in Connecticut,” it’s time to get into this park’s name. I’ll just quote from the state’s DEEP page:

A search for the origin of the name “Devil’s Hopyard” reveals a wide variety of different stories; none of them are verifiable and all are likely to be more fiction than fact. One of the most popular of these stories is about a man named Dibble, who had a garden for growing hops used in the brewing of beer. It seems that through usage, Dibble’s Hopyard became Devil’s Hopyard. There are records of several farmers having hopyards in the area, but there is no mention of a landowner named Dibble. However, Dibble might have been a tenant. 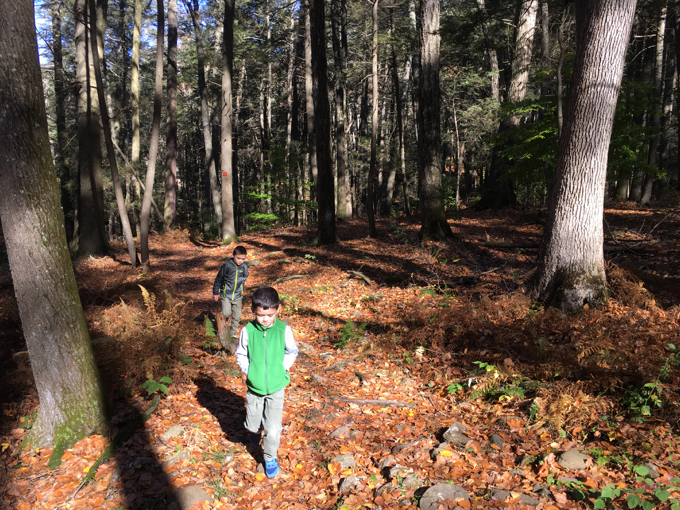 This is certainly believable, but knowing that several other “devil” place-names in eastern Connecticut are more attributable to crappy soil and superstitious colonialists, I have a hard time believing Devil’s Hopyard’s name came about via a game of Telephone gone wrong. 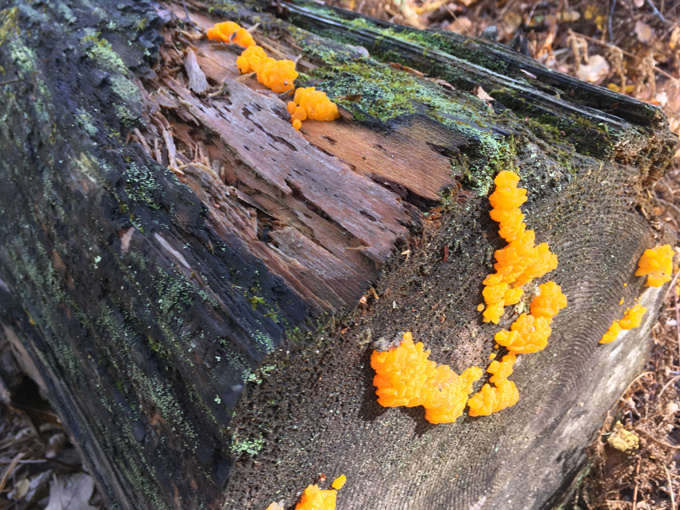 No, I’ll put my money on this explanation: 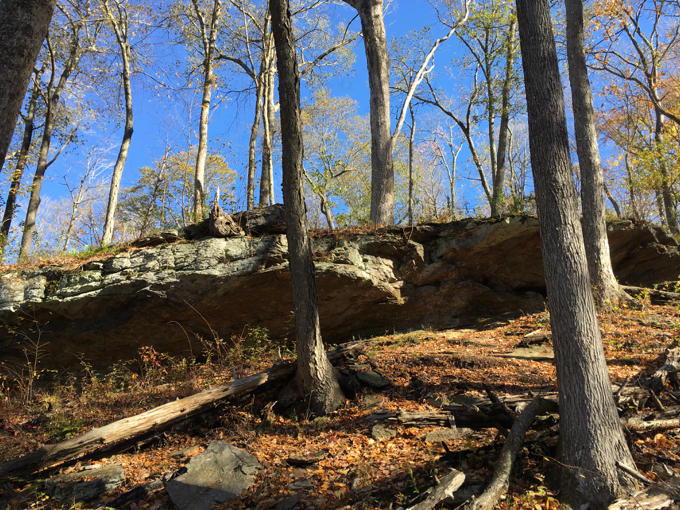 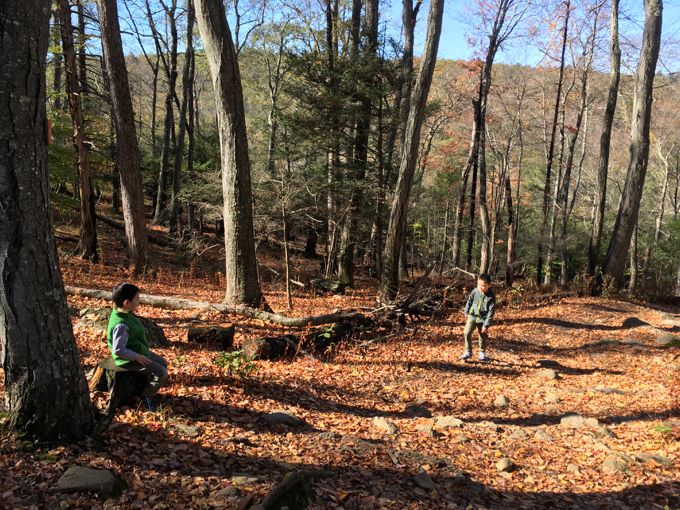 I’m not sure what weird filter or “HDR” or whatever my camera was doing during this hike… OR WAS IT THE DEVIL?!?!? but a bunch of my pictures have a weird hue to them. Oh well. In the one just above, Calvin is politely waiting for his slower older brother to make it up the climb. Such a nice boy. 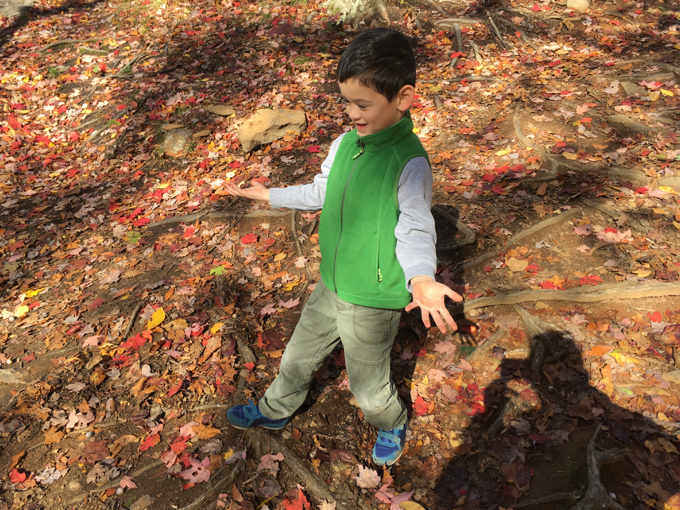 And such a clown too. The world is Calvn’s stage, that’s for sure.

We actually crossed paths with a few other hikers at Devil’s Hopyard, which is something of a rarity for us. Of course, peak foliage had just passed and this is a popular park. Even so, it’s always nice to see other people enjoying our Connecticut woods now and again. 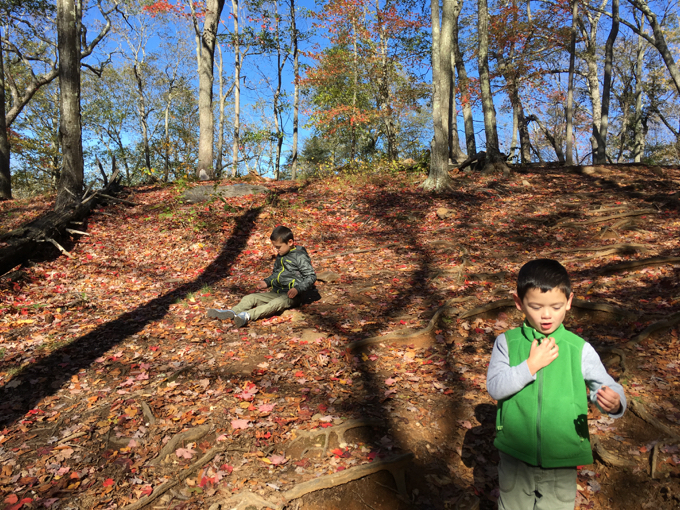 The Challenge point was the lookout at the southeastern end of the park. There were a couple other groups of people there, and all were somewhat surprised to see my troops bumbling onto the rocks. Then when Damian got agitated and started stimming and doing other clearly special needsy things, they were even more stunned. 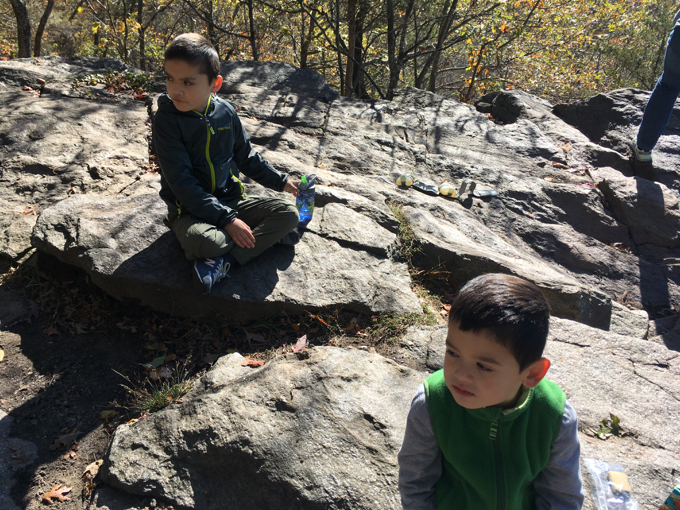 It was very evident. We didn’t care, we’d made it to our 13th Challange point and had some pictures to take. 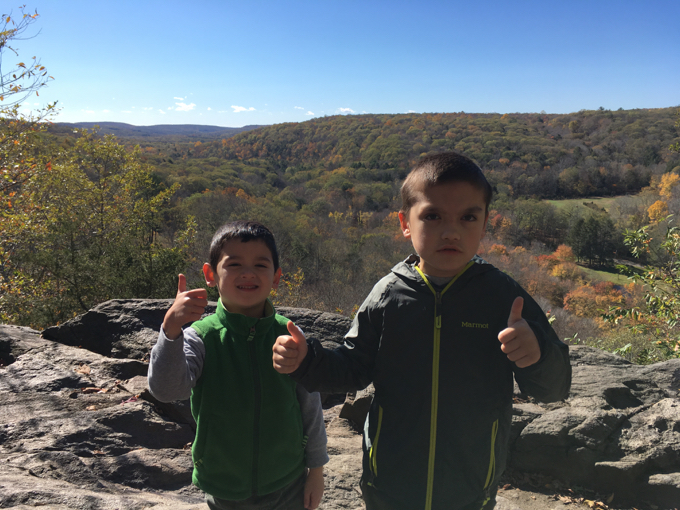 Nice work, boys. Now all we had to do was descend and make it back across the river in one piece again.

Of course, descending means Calvin must go too fast and falls and… 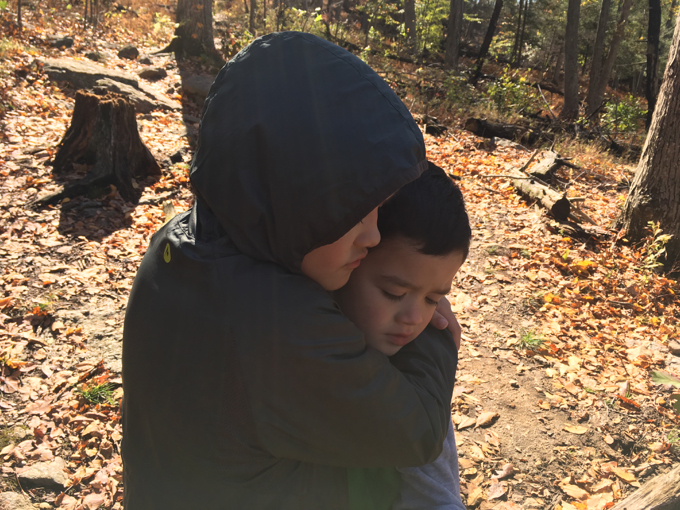 Yup. It happened again. Calvin falls and cries and I stare at him while his brother offers a consoling hug. It’s become routine. (And I’ll bet you a billion dollars it happens again during our final Challenge hike.)

Spoiler Alert: It does.

Calvin wasn’t hurt too badly, and I took a couple pictures of each boy navigating a rock on the trail. 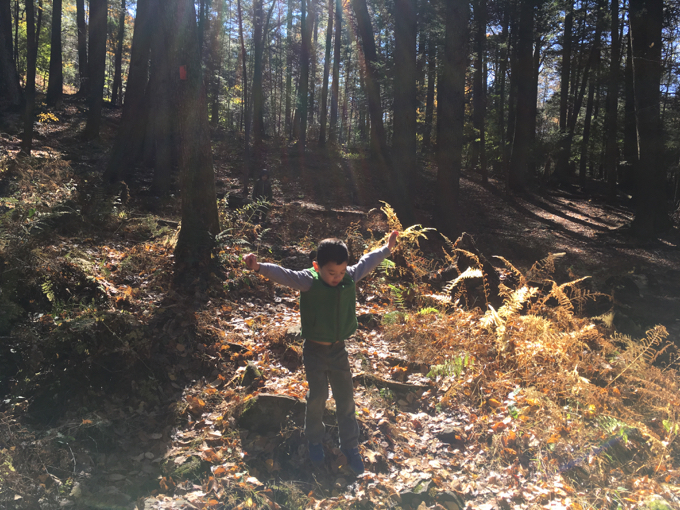 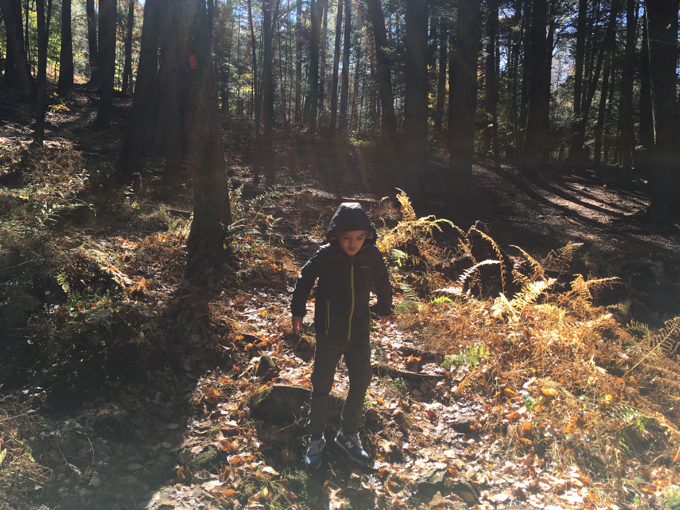 Damian-style, with a stoic pragmatism

Once back down to the river, I decided to risk it and cross at the spot nearest my car. It was dicey, but I figured if I stepped in, I’d be back to the car quickly anyway. I carried each boy across the rocks with a nimble deftness that belies my 44 years.

(Which isn’t what anyone watching me would say, but let me dream for a bit, will ya?) 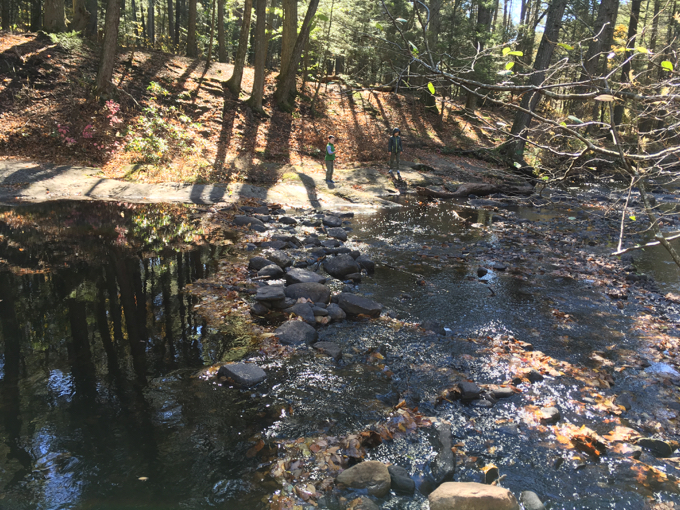 We made it with nary a drop of water on my shoes. The car was now only a few minutes up the trail, so I relaxed and allowed them to throw rocks for what seemed like an eternity. 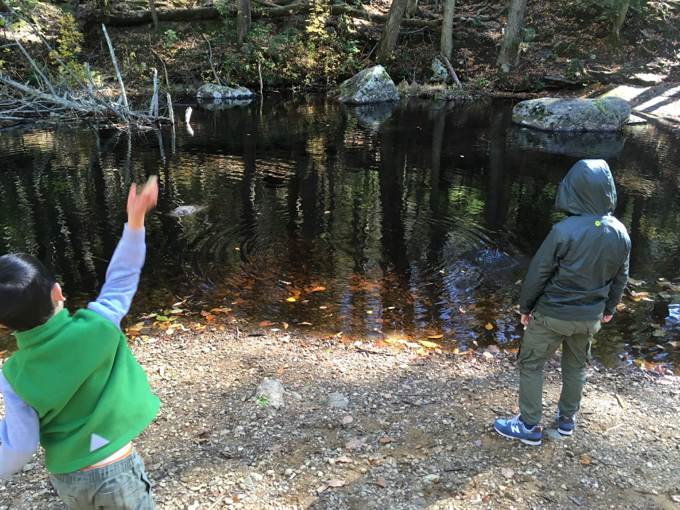 They finally tired of rock-throwing and we trudged back to the car.

I really love the backroads around Devil’s Hopyard and Gillette Castle. They are skinny and curvy and hilly and just plain fun. Even the ones with scary names.

We took are second required picture and headed home. (I noticed the sign here is way higher than at other parks; guessing punks like to steal it because of the Devil part.) 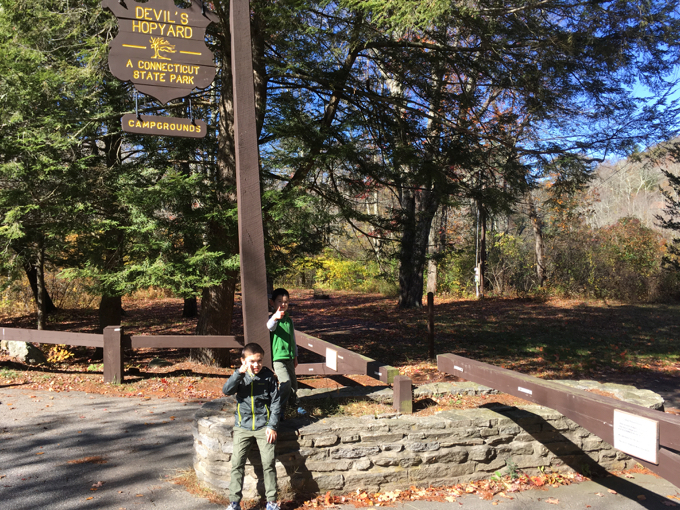