We’re not big on April Fool’s Day in the CTMQ household. Calvin is just beginning to understand the art of the prank and Damian, well, his special needs commitment to literalism hampers his ability to join in on the fun. 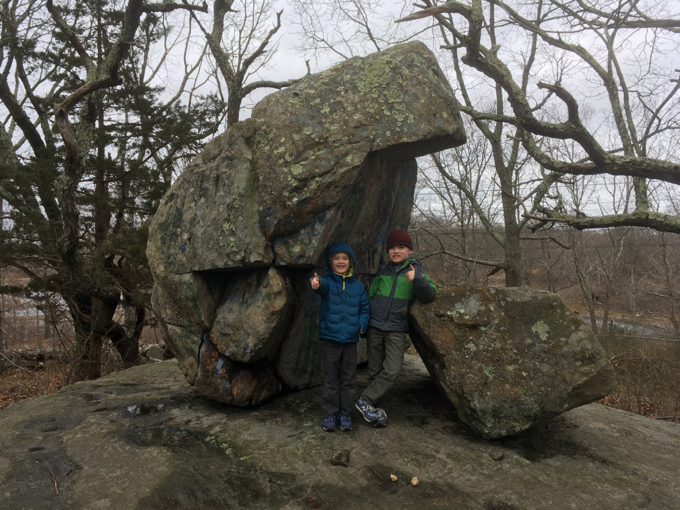 So when I told the boys that we were going to drive an hour through a cold rainstorm in the hopes that it abates before we take a hike near the Sound into howling 40+mph wind gusts, putting the windchill into the teens… they knew I was serious.

They were just hoping I was joking. 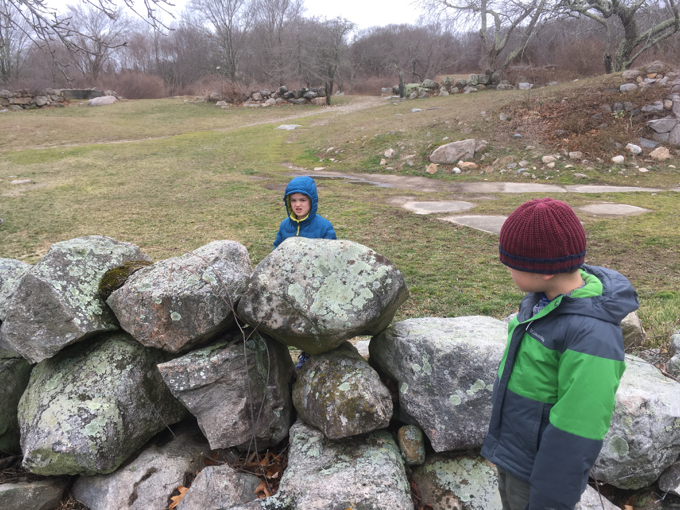 We stopped to see some friends along the way, allowing for the rainclouds to dissipate a bit. No joke: No one wants to go for a walk in cold sideways rain. Not even me. 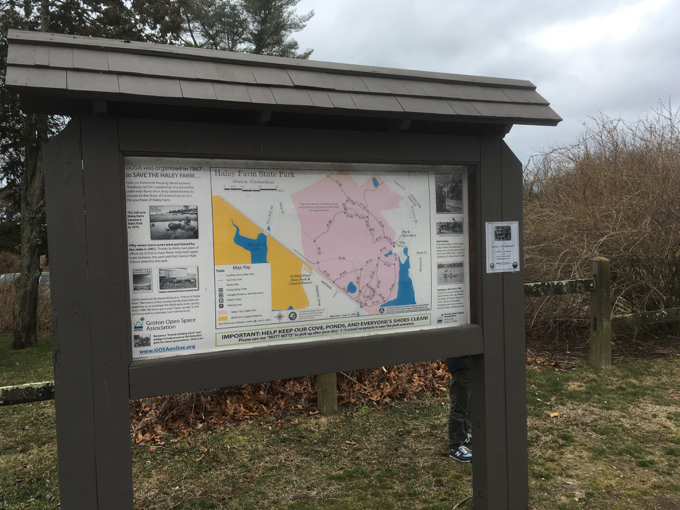 The rain had stopped by the time we arrived at the small Haley Farm State Park lot. This was the first time I’d been to this park… It is nestled deep in Groton and connects to the more popular Bluff Point State Park. (Which was the location of our final 2016 TSTL Challenge.) 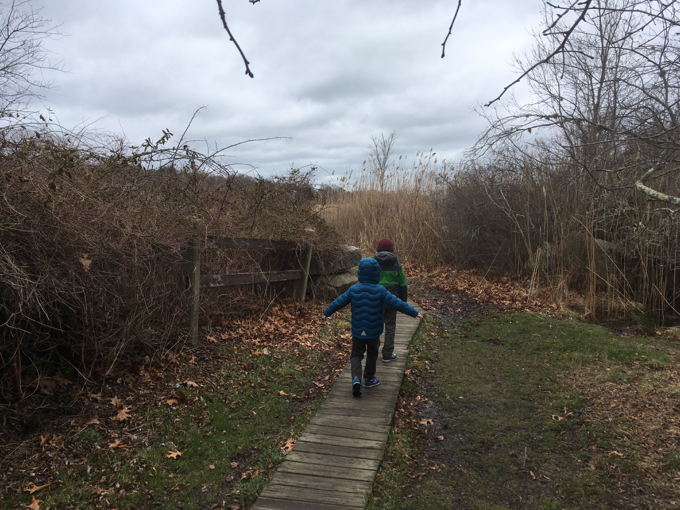 There were a few other hardy souls at Haley Farm when we began our trek, but they all seemed to be packing up and going home. The dark dankness of my pictures is an accurate representation of the day. 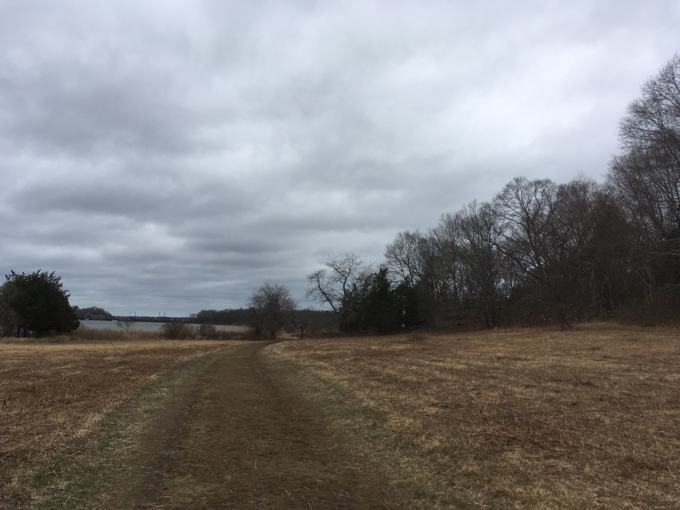 Not the prettiest of days

The remains of Caleb Haley’s stone farm buildings – and several of his stone walls – haunt the fields near the parking lot. I’ve read that stone building was his “hobby,” and I hope that’s all it was. Because his structures didn’t seem to have much permanence to them.

We got going and once we were exposed to the winds whipping in over the Sound and up Palmer Cove, we knew we were alive. 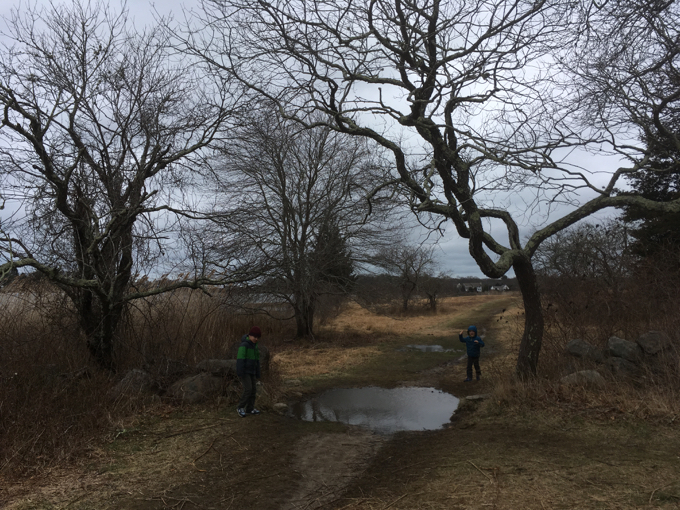 I kept encouraging the boys to move forward, avoid puddles, and keep their heads down. At the same time, I was sort of appreciating the stark beauty of Haley Farm. Sure, the houses across the cove sort of mucked it up a bit, but hey, it’s 2017 in Connecticut. I can accept that. 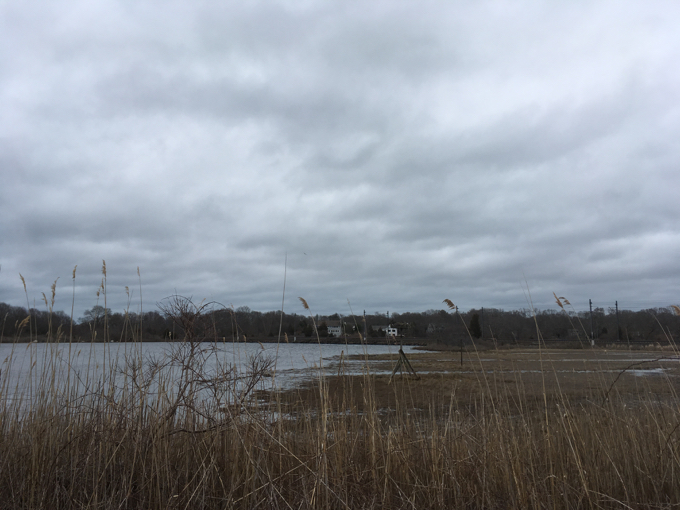 The trail we followed took us as close to the water as any trail in the park. And note, there seems to be a billion trails in the park. At least in the eastern portion of it. We stuck to the main route along what is basically a road. 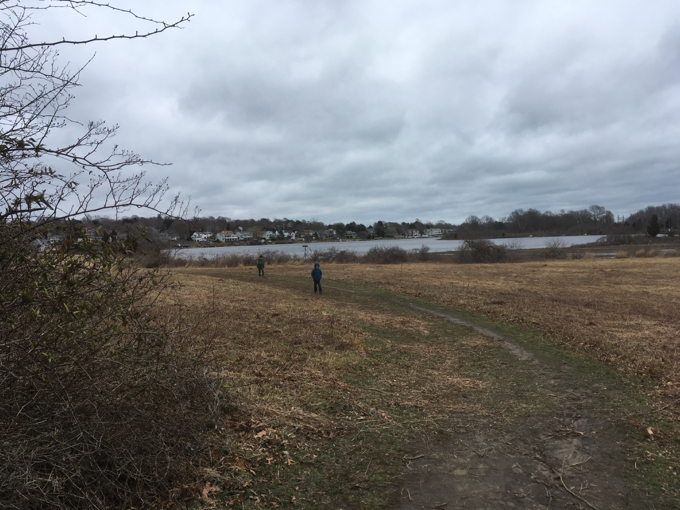 All the way to our TSTL goal – Canopy Rock: 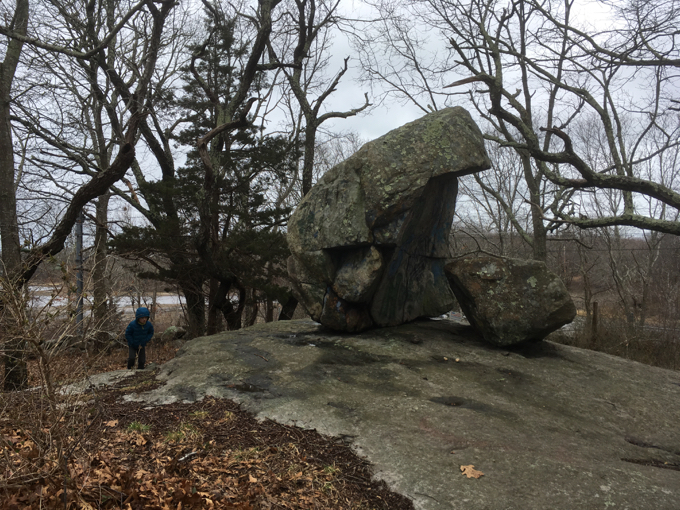 Grrr… morons with their graffiti. Not just graffiti, but some of the stupidest graffiti I’ve ever seen. Really, dude? You needed to tag Canopy Rock with a 40-year-old Pink Floyd album? Why? 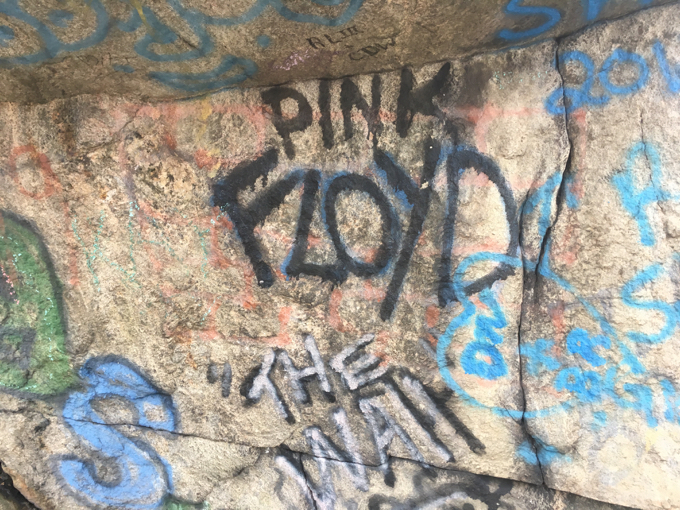 Anyway, despite the difficult conditions, Calvin and Damian seemed thrilled with Canopy Rock. Posing for a dozen pictures, playing around it, and asking all sorts of little kid questions as to how it came to be.

This glacial erratic boulder split into two was called “Canapie Rock” in John Winthrop’s land grant of 1649, perhaps because the larger rock forms a canopy over the smaller. In the mid-1700’s Jemima Wilkinson, a biblical scholar, who gained notoriety when she rose out of a coffin after she was presumed to be dead would preach Sunday sermons from these pulpit-like rocks. Ever since, the boulders were called Jemima’s Rock.

I’m glad the state calls it Canopy Rock and not Jemima’s… no need to give that grifter any attention, even long after her real death. 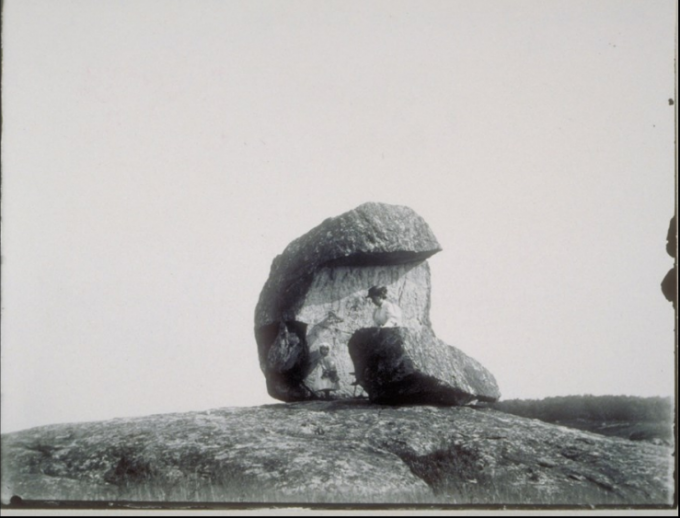 This photo was taken in 1897 of Ada (Adah) Newbury and her aunt Katherine Norton Clift Perkins. Jemima is behind the smaller rock.

My sons posed in front of the rock, behind the rock, beside the rock; I was almost confused by their willingness. It was even starting to rain a bit. 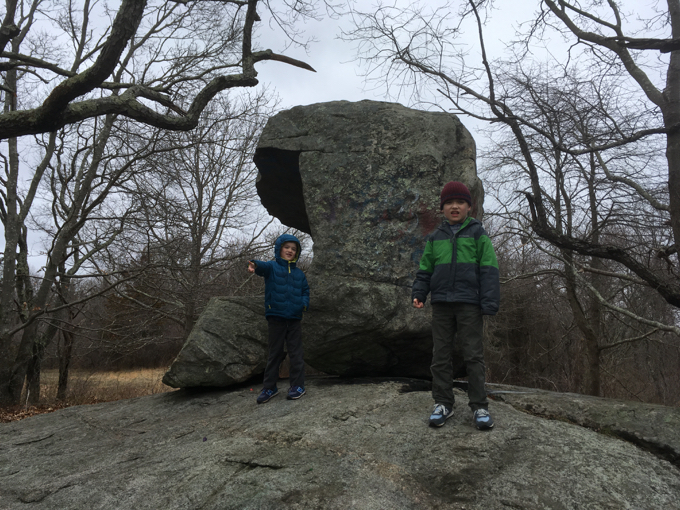 As we began leaving the rock area, I heard the rumble of an Amtrak train headed our way. The tracks are mere feet behind Canopy Rock.

I excitedly yelled at Calvin, “Come on! A train is coming!” Meaning, of course, to run back to Canopy Rock with me to watch it speed by. 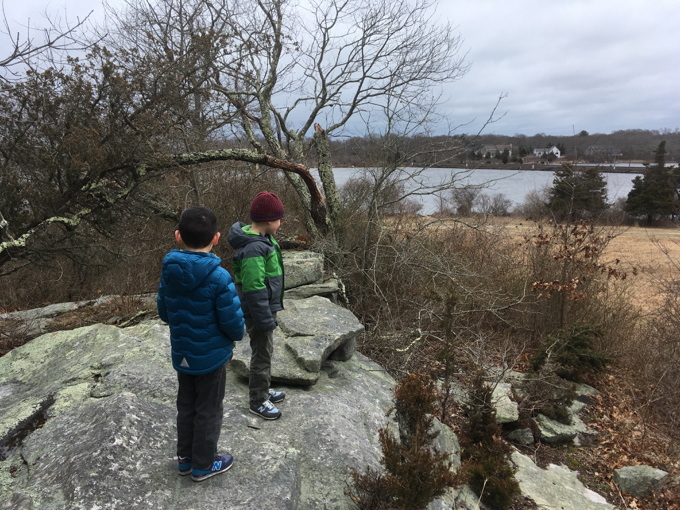 Unfortunately, the poor child interpreted my harried yelling as a warning that “a train is coming and you are going to get run over by it.”

He was catatonic with fear. I felt terrible. 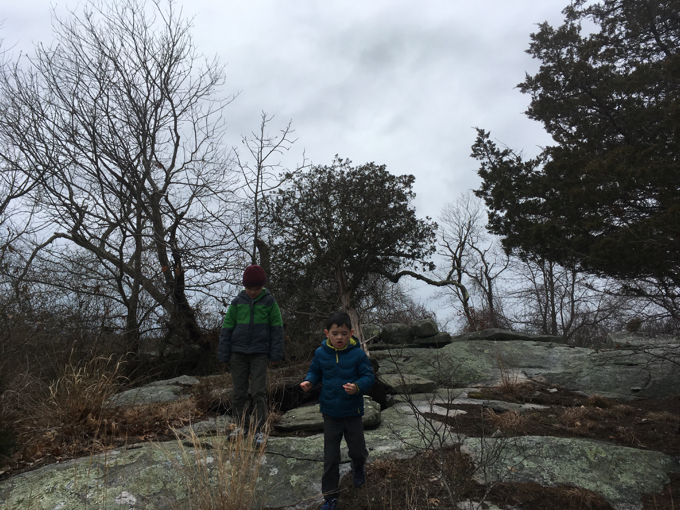 (At the same time wondered how he thought a train was going to run us over without train tracks under our feet… but I’ll give him a pass.)

We took a more circuitous route back to the car as I wanted to check out the viewpoint. With the jumble of trails here, I’m not even sure I found the exact viewpoint, but no matter. We found a nice rock outcropping that had a thin layer of ice on it. 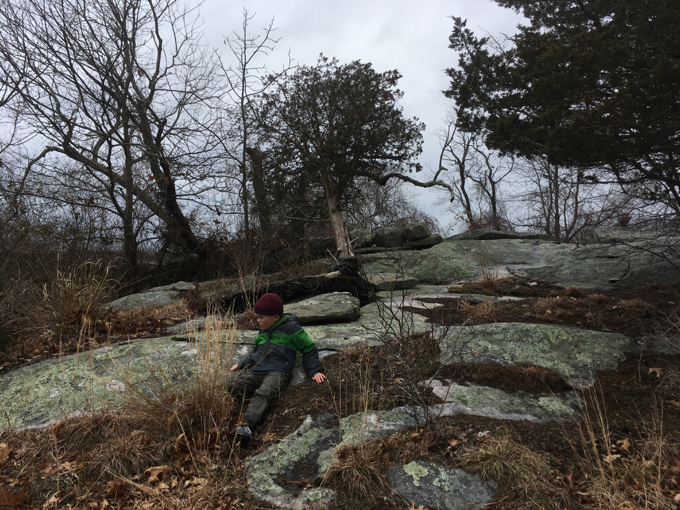 That meant it was more fun to climb on, of course. I fell once. Calvin fell twice. Damian fell three times.

We all laughed. It began to rain a little harder. 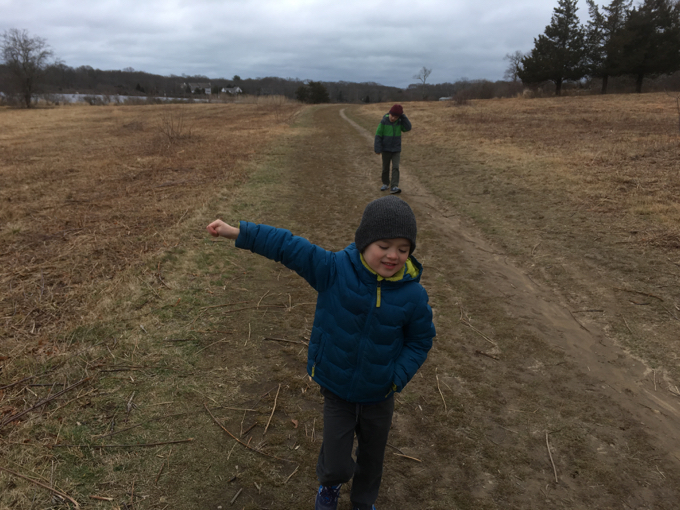 This had all the makings for a most miserable time, and yet… we were having fun. I can’t understand it. The walk back up the exposed trail to the car grew fairly intense. At one point, the wind was directly in our faces. Calvin realized that if he jumped up, the wind would push him a foot or two horizontally.

He enjoyed this phenomenon. 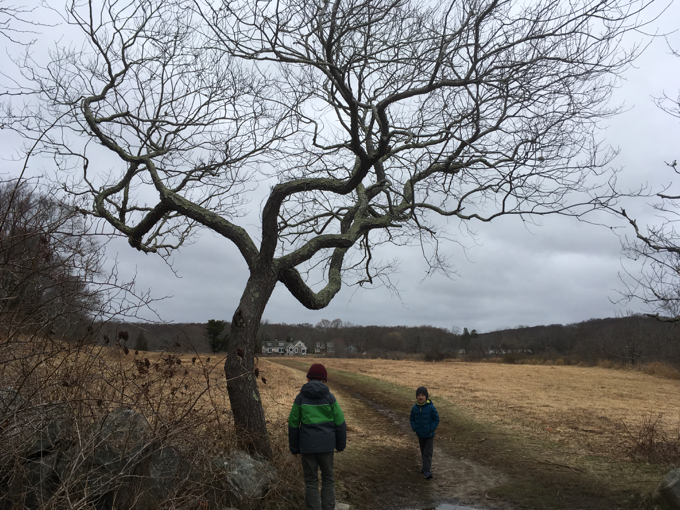 Calvin also learned (following my lead), that walking backwards into the wind and drizzle was more pleasant than facing it head on. Unfortunately, Damian cannot walk backwards.

Here is what it looks like walking into gale force cold drizzle while your brother walks backwards next to you: 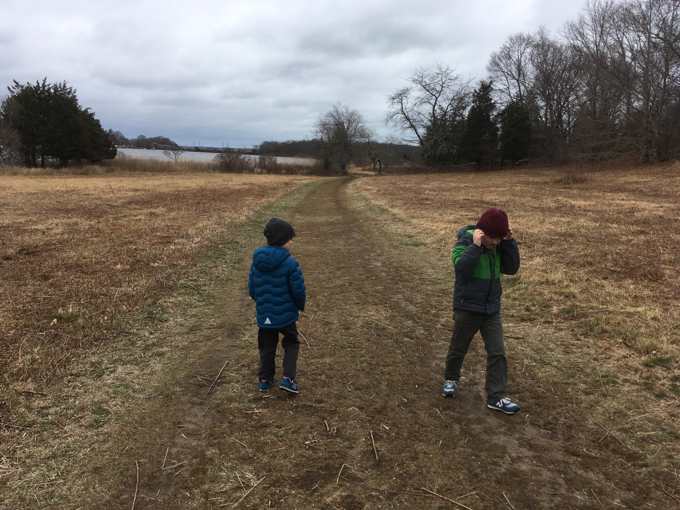 Regardless, we made it back to the car safe and sound and made the long drive home from Groton. A little bit tougher than we were the day before. 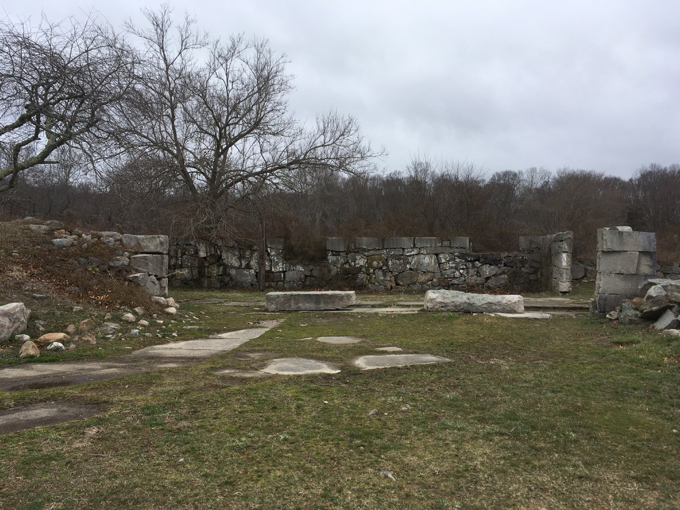