Dam, Yo!
West River Fishway
Behind a Walgreens on Whalley Ave, New Haven

In 2015, the dam and fishway were removed – which is a good thing! Fish now have a direct path to get to where they’re going. The fish ladder was moved to another river in Connecticut. This is still an interesting story, so I’m not deleting it.

There are way more fishways and fish ladders in Connecticut than you know about. Some have even become little museums of sorts and host open house days once or twice a year. We even have a couple eel ways. I plan to get to the better ones around the state over time, but this one might be the most interesting for all the wrong reasons. 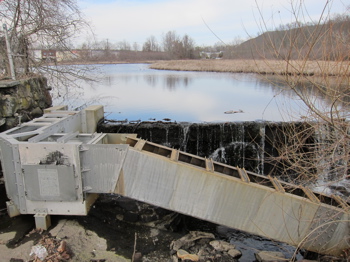 I was driving around New Haven with Damian and had stopped in a random strip mall plaza to give Damian some food and gauge where his head was at as far as lunch was concerned. I found a suitable private parking spot (as I figured I’d be changing him too) and noticed a little sign for the “West River Fishway.” I think I audibly muttered, “What?!” Fishways are supposed to be in pretty woodland settings, right? Not always. I forgot about Damian and wandered over the trash-strewn hillock and down to the fully functional fishway. 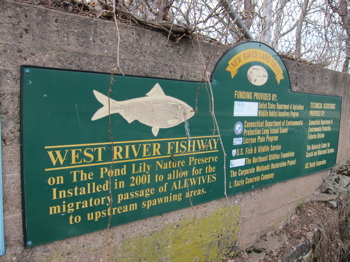 There was even some nice signage explaining what a fishway does and why they are important. Avoiding broken glass, I tried to get some good pictures of the site. It’s awesome that this thing had been here for 11 years at the time of my visit and still survives intact. I love it. The New York Times even wrote an article about this somewhat oddly placed (yet no less important) fishway. As always, this place has a long and interesting history that I’d never have known about if my six-year-old’s special needs didn’t require him to still be in diapers. Enjoy:

The View From/New Haven; A Passageway for Fish And a Lesson in Nature

In an unlikely location, behind the parking lot of a shopping center on Whalley Avenue in New Haven, the West River Fishway is enabling anadromous fish to swim upstream to their spawning grounds for the first time in more than 200 years. The fishway is also boosting the ecosystem and helping city dwellers, including young students, connect with a natural environment that is so close yet often goes unnoticed.

Anadromous species, which include salmon, shad, alewives, blueback herring and sea-run brown trout, hatch in fresh water, spend their adult lives at sea and then return to their birth streams to spawn.

They were abundant in Connecticut streams until dams blocked their journeys; now they are making a comeback, thanks largely to the construction of fishways, which help get the fish past the dams.

The new aluminum fishway has sections that make a series of pools, giving fish a less-steep passage over the dam, which was built in 1794 to power a grist mill. Today the mill pond and its dam sit (behind Taco Bell and Walgreen’s) on the New Haven Land Trust’s Pond Lily Nature Preserve. 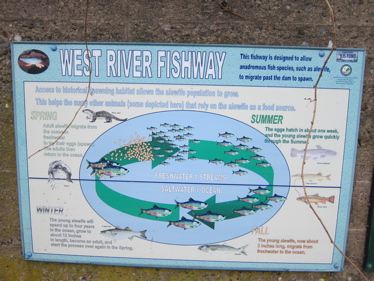 Until recently, the preserve’s 14 acres of woods and water were part of a larger parcel with a long history, including about 100 years of assorted operations at the Pond Lily Company, named after the lillies in the pond. The name remains even though the company closed in 1978; the buildings were demolished in the 1990’s, and the pond was renamed Willsher Pond in 1995. (John Willsher was a local resident who died of a heart attack after saving two boys who had fallen through the pond ice.)

In 1996, when a developer acquired the parcel for the Whalley Commons shopping center, the part deemed unsuitable for development was donated to the land trust.

Stephen Gephard, a supervising fisheries biologist with the Connecticut Department of Environmental Protection, was ready to take action. He knew the West River was just right for alewives in particular, but only if they could get over the Pond Lily dam.

”I had that dam on my list for many, many years,” he said. ”I contacted the land trust and said, ‘We could do this.’ ”

The trust members agreed and raised $47,000 from various sources to build the fishway, which officially opened in May.

”They carried the ball,” Mr. Gephard said, adding that he and his fisheries colleagues, having helped with other fishways around the state, provided technical advice.

Mr. Gephard had long eyed the Pond Lily dam because, he said, ”It’s got great habitat above and lots of fish below.”

Upstream of the dam, he said, lies ”classic alewife territory,” the kind of headwater ponds where alewives spawn.

Increasing the alewife population has far-reaching effects, because the alewife — a silvery river herring usually weighing about half a pound — is food for bigger fish, like largemouth bass, for birds like herons, ospreys and kingfishers, and for many animals, including otters and muskrats. Alewives used to be welcome table fare, along with other fish that ran in the spring; today anglers use them for bait.

Mr. Gephard was especially pleased to have a fishway that was not placed in distant woods, as many are, but right off a busy city street. ”Urban people deserve anadromous fish runs, too,” he said.

Although the new fishway is aimed at alewives, other anadromous fish are expected to use it. No runs have been spotted yet, nor have any fish been intercepted in basket traps placed upstream. But fishways do not always catch on right away, and this year varying temperatures, along with a dry spell, may affect spawning runs.

Margaret Davis, who lives across the river at the McConaughy Terrace housing project and runs an after-school program, learned about the fishway when Lauren Brown of the land trust came to visit.

”She came and talked with the kids,” said Miss Brown, who plans to help monitor the fishway. After all, she said, ”It’s practically in my backyard.”

Land trust members and others regularly monitor the fishway, carrying out tasks like cleaning up debris. ”We volunteered for it,” said Sandy Johnston, who is almost 13 and lives nearby with his brother Isaac, 4, and their parents, Anne and Robert Johnston.

The Johnstons do their tasks on Thursdays, but visit at other times as well. As part of his home schooling, Sandy has been studying the West River, learning about the factories that operated on its banks in the 19th century and observing the creatures that live along the river.

”There are lots of geese,” he said. ”My parents saw a muskrat. We saw a red winged blackbird, a great blue heron, hawks.” 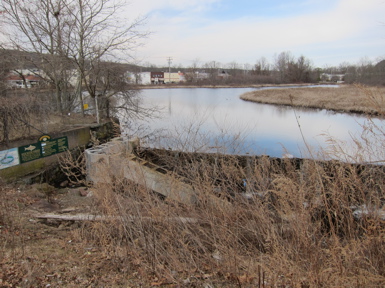 ”We come on Friday, rain or shine,” Mr. Barton said one rainy Friday.
A dozen students, wearing assorted rain garb and boots, made their way over the little ridge between the Pond Lily Preserve and the shopping center parking lot, stopping to spread hay around a turtle nest in the mud of the ridge. They had spotted the turtle laying the eggs two days before.

”We put this around it to protect it,” Veldon Nelson, a 10th grader, said.
John Mercado, a ninth grader doing chores, said: ”We take the temperature of the water and clean up the trash. Then we go back to school and write what we did.”

The students have spotted a great blue heron, ospreys and — very briefly — something that appeared to be a beaver.

”They’re city kids all day long,” Mr. Barton said, ”but when they’re out here, they explore.”

This part of New Haven is incredibly unique in a lot of ways. The base of West Rock, where the city experimented with low income housing projects (in an effort to move folks out to “nature”) is always very strange to drive through. They suffer from all of the issues more urban housing projects suffer from, but they are, quite literally, at the base of the massive West Rock cliffs. It’s just a somewhat surreal place to me – just like a fishway behind a Walgreens on Whalley Avenue. 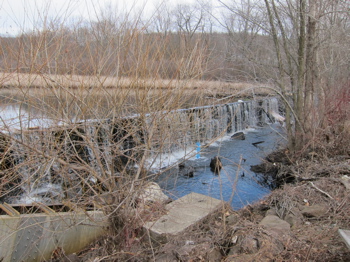 Here’s a video of it too.
CTMQ’s List of Fishways