Those of you who have read through my various hikes in the upper Connecticut River Valley know that I have an affinity for the area. And while I usually cite Simsbury and Canton because they are closest to my home in West Hartford, but Granby deserves just as much love. 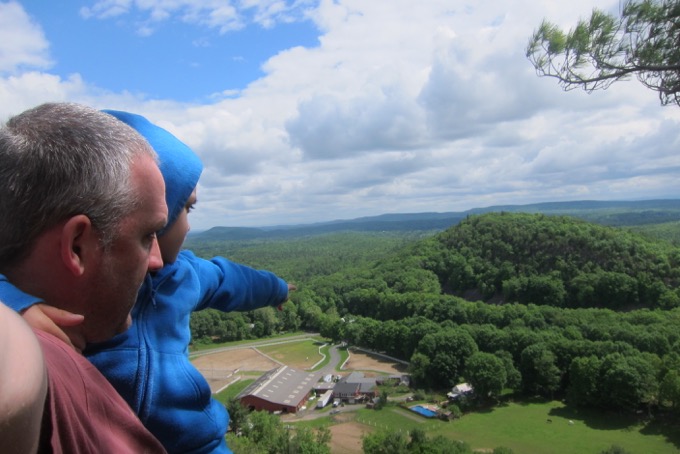 The Granby Land Trust only has a few mapped properties, but they are beauties – and with the McLean Refuge and the Metacomet Trail in town a well, it’s a very worthy hiking destination.

Coming off the heels of our awesome hike up at the Mary Edwards Mountain Property (here), I wanted to take the boys back to Granby for a follow-up. 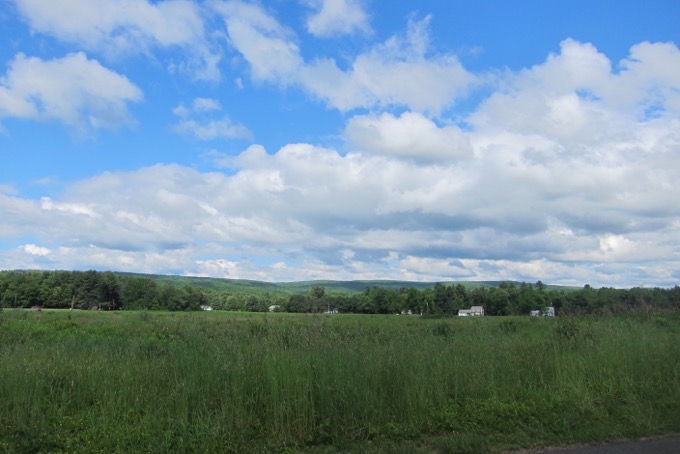 The Western Barndoor Preserve offers yet another perfect hike for the little ones. (You can access it via a longer hike over from the McLean Refuge by crossing Barn Door Hill Road… but McLean won’t tell you that. Because that’s how they roll. And no, it doesn’t involve a millimeter of trespassing.)

There is a hiker’s lot at the intersection of Barndoor Hills Road and Kettle Pond Lane. From there, walk west up Kettle Pond Lane to the trailhead. On the way, give a nod of appreciation to the guy who owns this house: 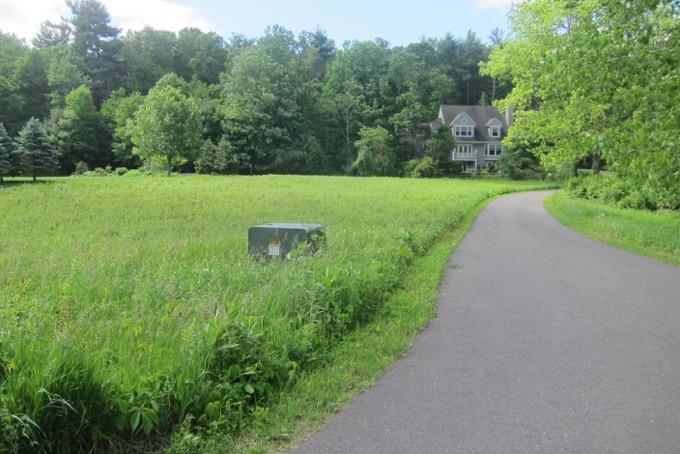 Instead of maintaining a giant chemical lawn, he keeps most of his property as a wild meadow, complete with bluebird boxes and – OH MY GOD! – natural vegetation! Props.

The trail here is an out-and-back affair, or alternatively, and up-and-down hike. It’s not a long hike, only .86 mile total for the round trip. The kicker is that it includes 343 feet of vertical gain (and 343 feet of descent, for those of you with bad knees) to get to the 671 foot summit.

For a three-year-old and my eight-year-old who, due to his various disabilities, this is not a climb to scoff at. 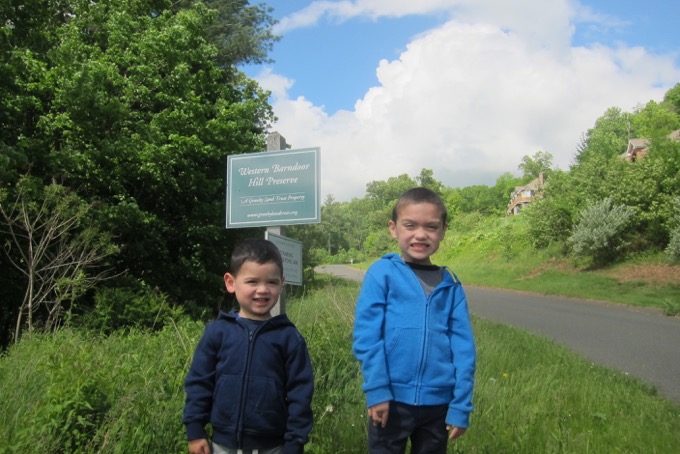 … and yet they scoff.

(For me and most likely you, it is. The trail is gradual and only steep in one spot – and even my kids were able to navigate it on their own.)

On the lower slopes, the biggest challenge for me was keeping a hawk-eye out for poison ivy (there was some at the trailhead). At least they do a decent job of listening to me when I warn them about it. Still, it signals the advent of summer and what that means for our hiking… 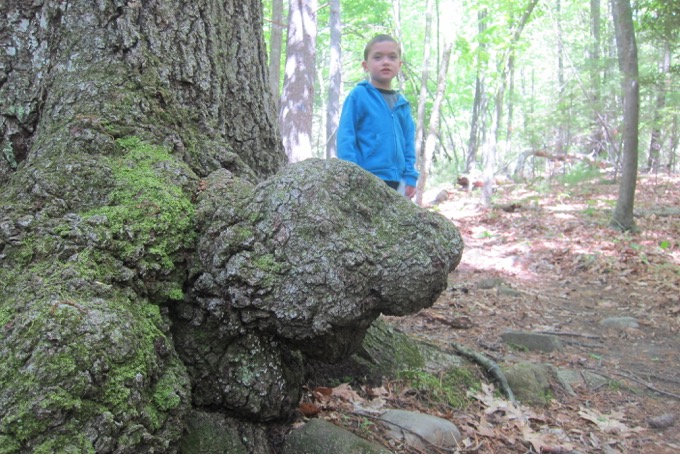 My wife (and the boys) are beach lovers, so therefore we go to the beach all summer. The only part of the beach I like is seeing my wife at the beach. (And as her husband, I can say that’s plenty good for me.)

But as one who is severely allergic to poison ivy, I don’t want to watch my boys suffer with it. And while I know deer ticks actually sort of disappear during the hottest months of July and August, that added threat of Lyme Disease is enough for me to keep them off the trails for a while. 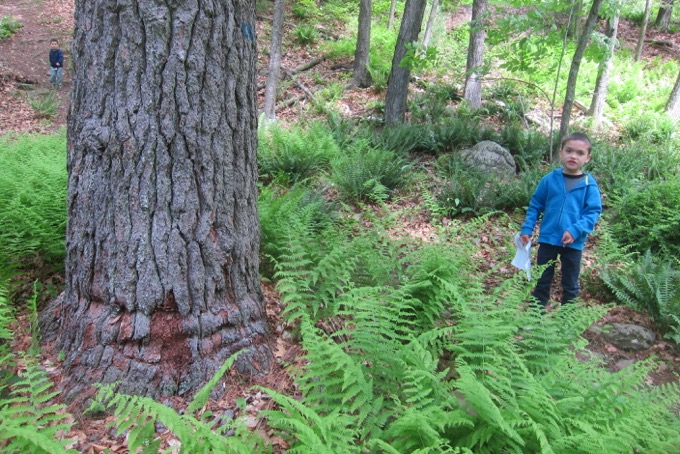 As you can tell by way of their hoodies, it was actually a fairly cool late spring day. An absolutely perfect hiking day.

Once through the fern fields of the lower slopes, the trail begins to climb in earnest. While nearby houses can be heard, if not seen, most of the way up, this hike still feels fairly remote somehow. Time for a rest… 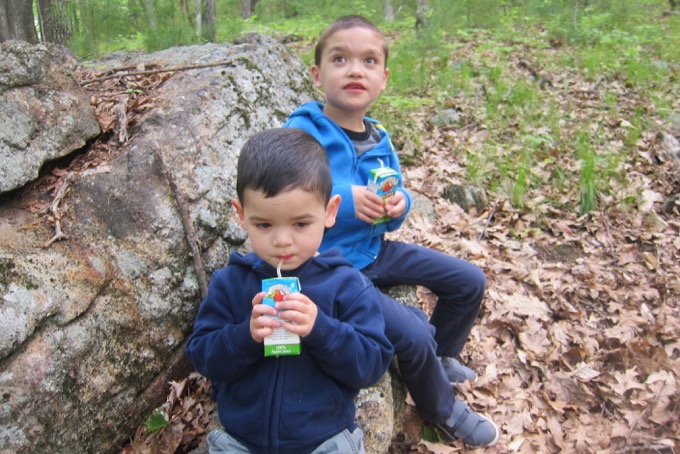 I feel terribly, but when I hike I hate to stop and sit. So I probably push these two clowns more than I should, but they’re kids, right? They’ll be fine. Up, up, up we climbed.

Just before the trail leveled out, Calvin demanded to be picked up. Okay, just for a minute or two. Fortunately, we quickly reached the grassy plateau at the top and like an Italian World Cup soccer player after getting the magic spray, Calvin was off and running up the trail. 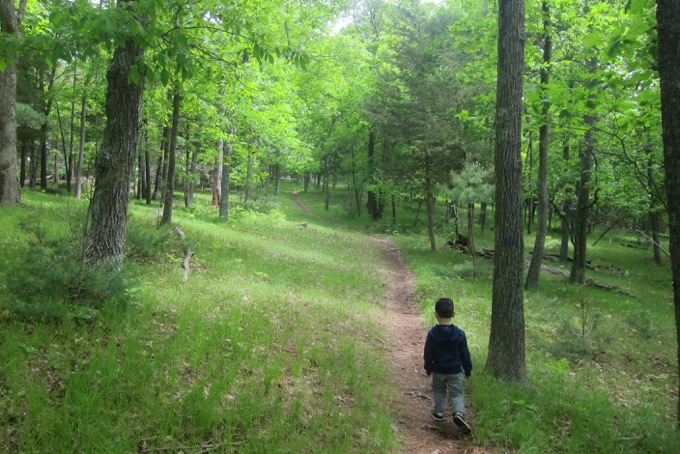 It’s beautiful up on top. Really, it is. As we neared the lookout area, I put the reins on my boys as I didn’t want them to run over the cliff and die. I’m a good dad like that.

Even Damian can pick up my tone of voice when I mean business. I told them of the dangers of death and dismemberment. I explained the high cost of Life Star and intensive care units. Just as I was about to break down how our high-deductible health plan works and the high risk of infection that comes with compound fractures, Calvin spotted a horse down below. 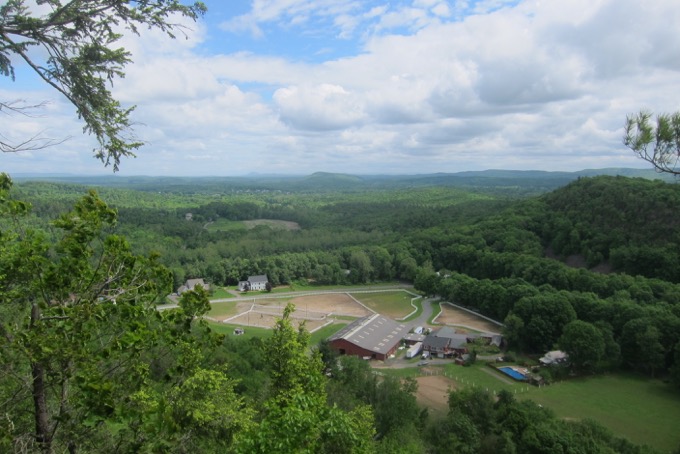 Yes, down below is the Valkyrie Equestrian Center, which, being an equestrian center, does indeed have horses. Despite my stern warnings about the cliff, Calvin kept insisting he wanted to “Go down ‘dere” to see the “horsies.” Like, he wanted to go right over the cliff. Even Damian, whose butt was glued to the rock I had told him to glue it too, was behind us saying, “Don’t do dat. It’s dangerous. Don’t do dat.” 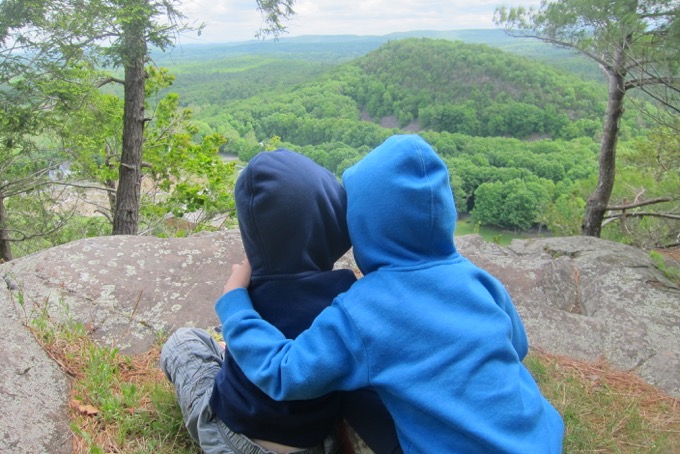 I convinced Calvin it was a bad idea to jump off a 300-foot high cliff face and glued his butt to the rock before giving Damian a look-see.

They loved it. Although they don’t really “get it” yet, I do think they sort of figured out that climbing up this “mountain” yielded them a nice reward at the top. And that made me happy. 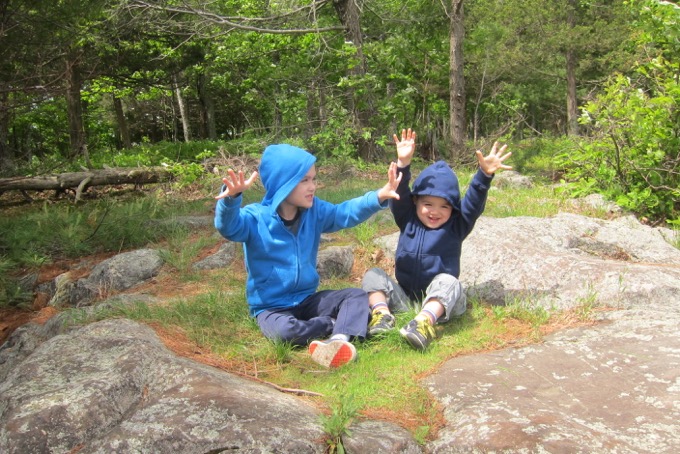 The trail is well-marked and very nicely maintained. And like I said, you can continue across Barndoor Hills road and into the McLean property if you’d like.*

*Of course, you’d be breaking the rules of McLean. I’ve written about this absurdity before and have spoken about it many times with many people who have interest in such esoteric things. Look at this map. It’s probably just under 20 square miles of western Granby. If you follow the green outline, that’s McLean’s willy-nilly boundary. If you look just right of center, you’ll see some “GLT” properties. GLT is Granby Land Trust. (Western Barndoor Hill Preserve is the GLT in the middle of this map below and to the right of the other GLT property in the middle of the map. I love maps.) If you look at the land surrounding McLean, you’ll see Granby Land Trust, Simsbury Land Conservation Trust (SLCT) ,Town of Granby (ToG), Town of Simsbury (ToS), and Enders State Forest land. I actually think there should be some Canton Land Conservation Trust land shown at the bottom left as well. 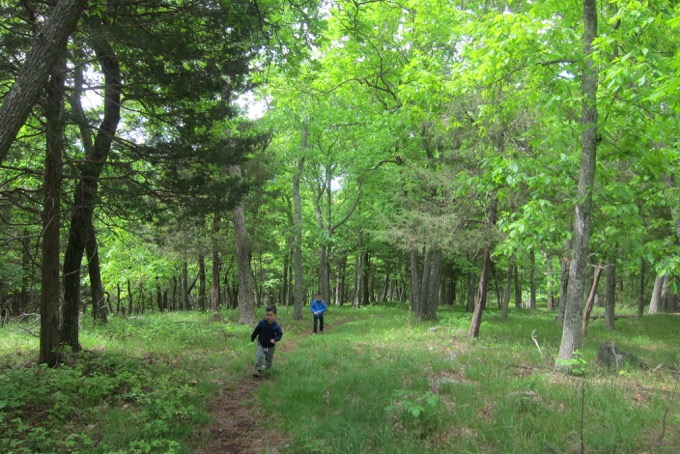 Anyway, none of these properties with trails are allowed to connect with Mclean trails. The most absurd issue with this isn’t even the Western Barndoor Hills Preserve situation… it’s the Simbsury LCT properties on the bottom to the left. They don’t look like much on this map, but they are beautiful areas. And gee, imagine if you could “legally” hike from those ridgeline trails north into McLean? And gee, imagine if you could then use existing McLean trails to go northwest up to Enders and the beautiful falls there and then continue on west across some of the most remote and beautiful land in Connecticut? 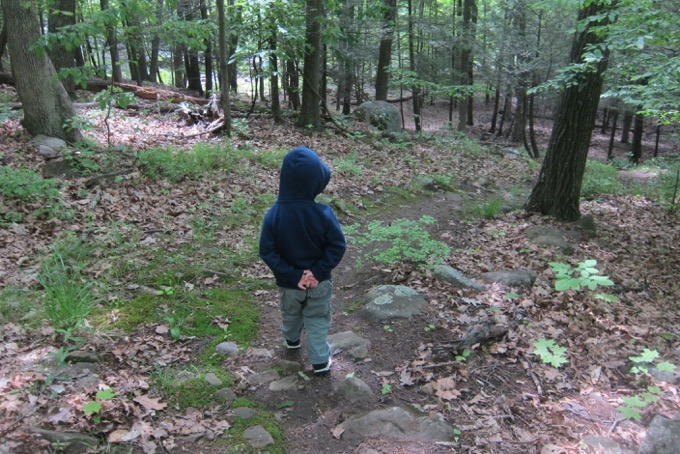 Sound fanciful? It is… sort of. The CT Forest and Parks Assocation (they of the blue trails around the state) ARE building and blazing an east-west trail connecting the Metacomet in Bloomfield over to the Mohawk Trail in the northwest corner. I know the general route down off the ridge and up to Enders and boy, it sure would have been nice if the McLean bylaws could be amended to allow for such a simple and wonderful thing. 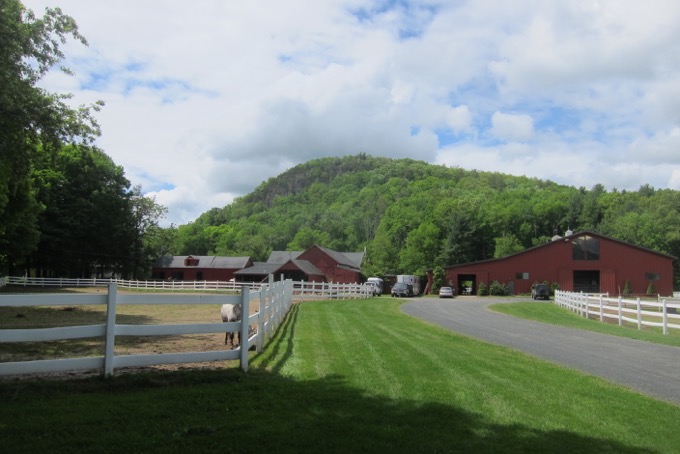 The hill from the bottom