The fun part of being a crossword nerd is that I know that a “moor” is a fen. And a heath. It’s also, I assume, a tract of open uncultivated upland which I can only assume Westmoor Park gets its name from. 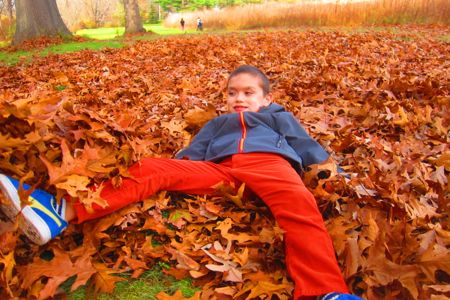 I assume wrong. Having just read the history of the property, Westmoor was so named on September 28, 1923 by A. Raymond Ellis, who had just purchased it out of foreclosure. Ellis started the Westmoor Fox hunt in 1925 and formed the Westmoor Farms Polo Club.

A “moor” can also be defined as a tract of open land preserved for shooting. So there you go.

(If you have an interest in such things, here’s the whole history of Westmoor.)

And here’s a quick review of what Westmoor is:

Westmoor Park is an environmental, agricultural and horticultural education center dedicated to generating awareness and appreciation for the natural world.

The park encompasses 162 acres and includes a diversity of natural habitats. A particularly popular attraction is the park’s demonstration farm, which is home to a variety of barnyard animals. There is a large garden area devoted to seasonal flower beds as well as herb and vegetable gardens, and three miles of nature trails (one-half mile of which is handicapped accessible) that encourage visitors to explore the park throughout the four seasons. 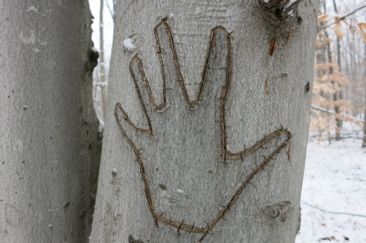 The education center at Westmoor Park features an exhibit area, a nature discovery room and a heated greenhouse. There is also a spacious meeting room availabte for classes and community use.

Westmoor Park is maintained by experienced staff with backgrounds in biology, natural sciences and agriculture. Their commitment to quality interpretation has helped the park achieve its reputation as one of the finest environmental education centers in the state. 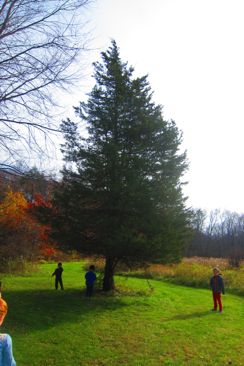 If it seems like I’m taking up way too much of our time talking about a little town park, I’m sorry. But Westmoor is a mere 2 minutes from my house and as you can imagine, we spend quite a bit of time there. It’s sort of an endearing place to me and my family.

West Hartford has a bunch of great town parks for swimming and other stuff, but this is the only one with actual trails – and I’ll be honest up front, it’s really not all that fantastic. (Especially when you can drive to one of the MDC reservoirs up on the “mountain” in only a few minutes for much better hiking.)

But Westmoor is still a great place, especially if you want a walk with your kids. Or your kids and your friend’s kids, which is exactly what I did on a late fall day. 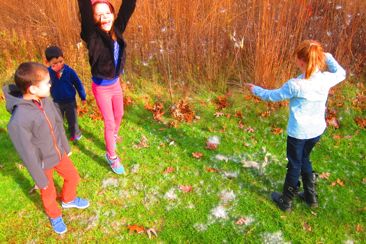 My friend Chris and I met at the barns and the kids checked out the animals for a spell, while we chatted up ESPN guy Scott Van Pelt who happened to be there with his wife and daughter. I really didn’t want to talk about sports, but hey, that’s what happened.

Then we set out to take a walk around the joint. There are 5 named trails here. On the day I was with the kids, we more or less did the Wet Meadow Trail and the “Handicapped accessible self-guided nature discovery trail.” 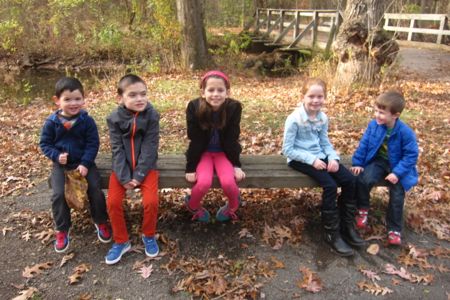 If you’ve walked around Westmoor, you’ve probably done some of this walk. Everyone likes to go to the flagpole and then to the cabin and maybe down to the stream. The Wet Meadow Trail crosses the stream and wanders through a nice meadow. As you’d expect.

The kids were enjoying everything until I gave my son a milkweed pod to check out. Now all 5 kids needed endless supplies of milkweed pods to open and/or explode and/or expose to the wind, etc. Which is cool and all (I took the opportunity to explain seed dispersal techniques and their interesting evolution to the children. They especially liked the “birds poop out the seeds” dispersal method.) but the meadow here was full of thistle and burrs. But the kids didn’t care about their dads getting torn up. 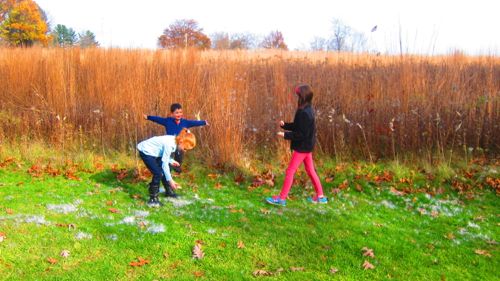 Milkweed pods for everyone!

Seriously, watching them have so much fun with something “free” and outside was rewarding for both Chris and myself.

I was quite surprised to see recent evidence of beaver activity down here as well. Part of me thought (and still thinks, maybe) this is just a demonstration tree and humans did it. 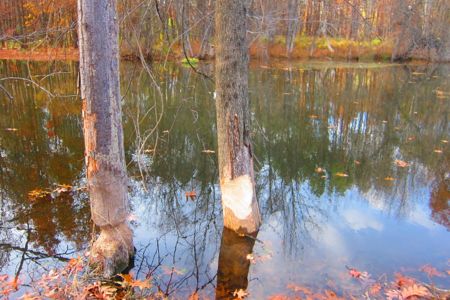 And that was pretty much that with the kids. Except Chris took a really good picture… which he kindly sent to me, but I can’t seem to find it anymore. I’m lame.

I returned alone a few months later to see what else the property had in store.

I left my house as flurries just began and drove the few minutes to the park. By the time I exited my car, it was full-on snowing. Whatever. 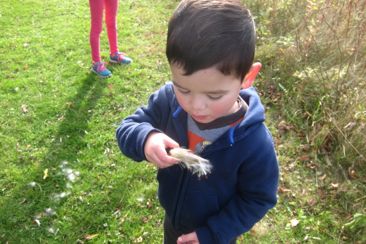 My goal was to see how far south the trails extended, as I had a notion that they wound their way deep into off-Mountain Road suburbia. The map is kind of vague where the south end of the park is, and other maps show a distinct lack of housing along the stream.

Yeah, I know, you’ve all had the same goal. 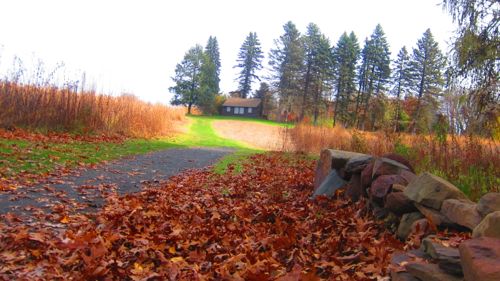 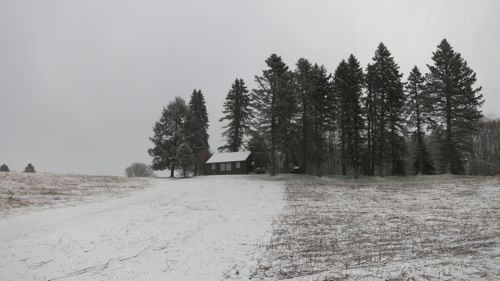 I set out down the wide trail to the maple swamp trail. And now it was really snowing quite hard. No matter, the swamp all around me was still evident, though frozen. I hit the unnamed trail that took me to the Bugbee Dam area. I took the little spur/access trail over to the cul-de-sac at Pioneer Drive. I have a couple friends that live on Pioneer and I wonder if they are aware of this secret way into Westmoor. 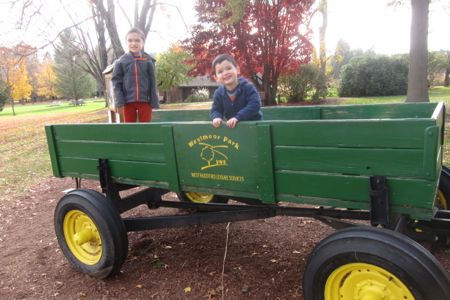 I had no idea that this dam existed, but there’s a nice plaque here stating that it was built in 1969 by order of the Watershed Protection and Prevention Act. The dam is rather lame, but I’m sure the houses below it are happy for it.

After the dam area I came to my favorite part of the Westmoor Trail system: 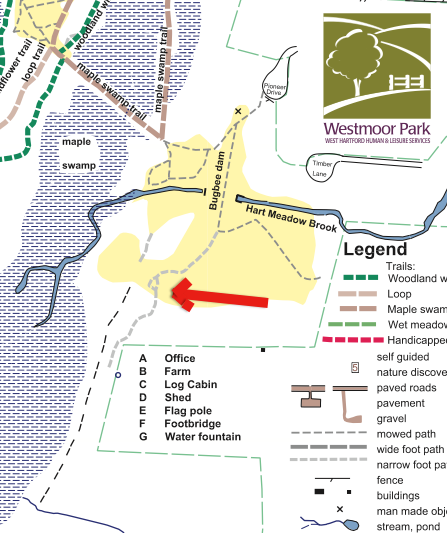 Look at the red arrow

See that random circle in the middle of the trail? Why? Surely the reality doesn’t take care to maintain that dumb circle… 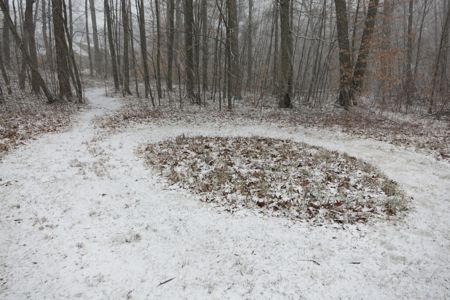 And here it is in reality

Haha, wow. I would love an explanation for that.

From that circle, I continued south on the well maintained path, skirting West Hartford backyards. The trail was in good shape, which surprised me somewhat… How many people ever get down to this part of the park? I assume the locals from the houses I was near access the park for dog walks and such, but other than that? 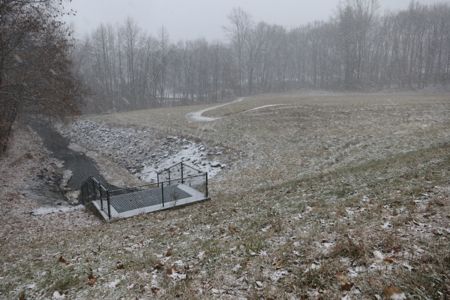 I have no idea. But this is MY town’s park and I was determined to explore it fully.

Unfortunately, the trail just sort of ends near a backyard off of Cliffmore Drive. So I turned tail and after exploring a whole lot of nothin’ of the maple swamp, found my way back to Bugbee Dam and then over to the Wet Meadow and Loop Trails.

The Loop Trail follows a very well-defined esker through the woods and above more of the swampy area. It reaches the loop of its name and heads back towards the major trail intersection again.

From there, I returned up the hill and past the barn and the fields and back to my car. 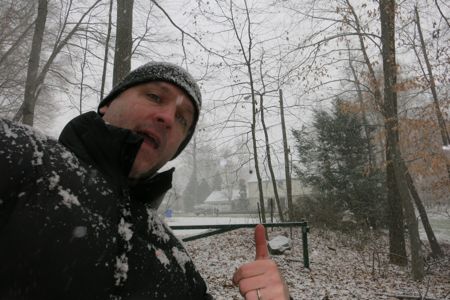 I am satisfied that I’ve pretty much hiked all the trails Westmoor has to offer – much more than most visitors are even aware of, let alone explore.

Annnnnnd, that’s all I’ve got.