I try to squeeze in “CTMQ stuff” whenever possible. As my sons have grown, they’ve taken me to different corners of the state for various reasons – and I’ve leveraged many of those trips for my own selfish purposes. Sometimes I almost make it into a game… will it be open when I get there? Will I get to taste everything I want to taste? Will there be enough daylight? 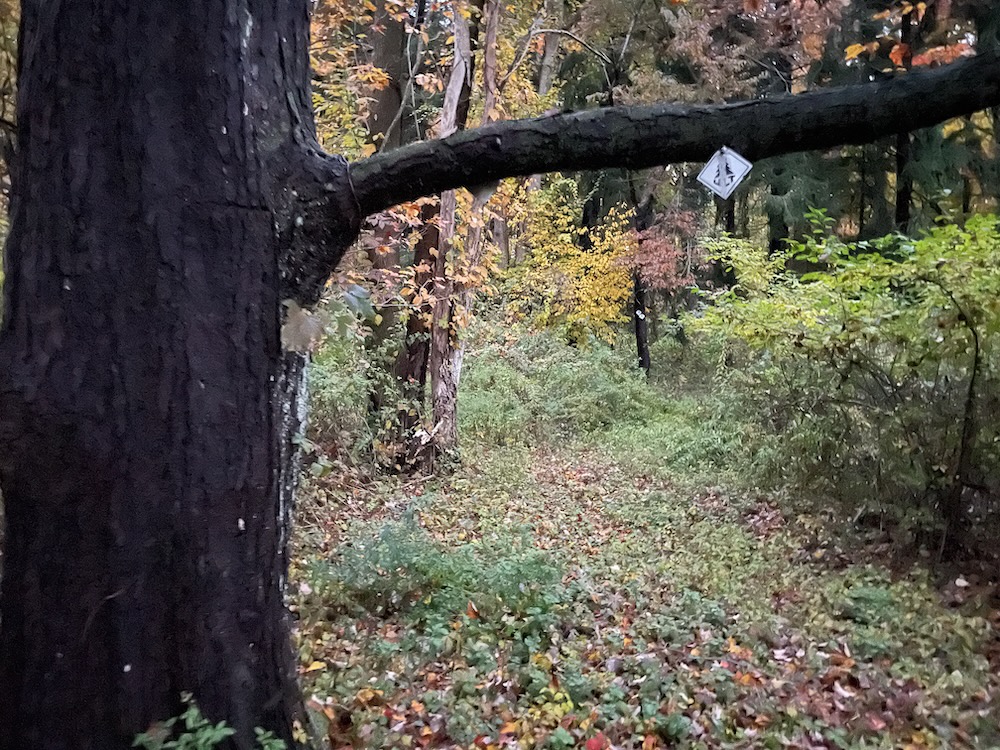 My son had been training with his soccer team at Choate-Rosemary Hall in the evenings as each week it got darker earlier and earlier. (Carpooling meant that I’d only be making the trek once a week myself.) I planned a series of hikes, each shorter than the last with the waning daylight.

And the Beach Preserve off of Cheshire Road would be my last in 2022; mere days before Daylight Savings Time ended, pausing my Wallingford forays for many months. 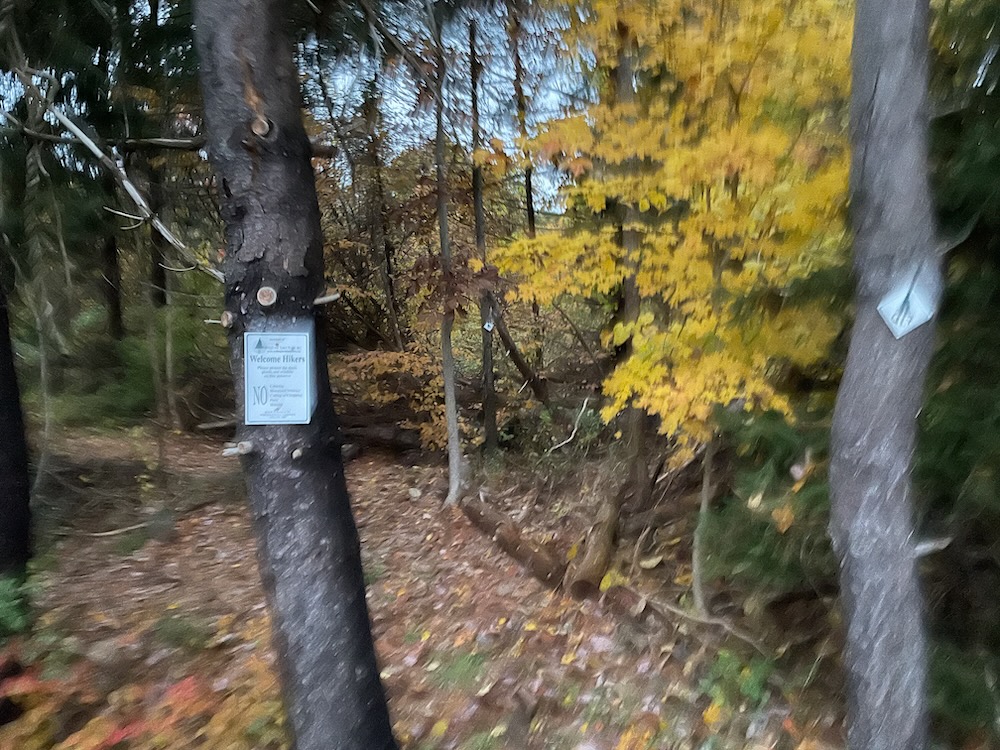 When taking pictures in extreme low light, I need to learn to hold the phone steadier

I’d explored all of the Wallingford Land Trust properties over the years and they’ve often left me wanting for more. While the town has plenty of cool spots to hike, the WLT seems to have gotten the table scraps after CFPA, the state, and the town had their way.

But as is often the case with smaller, none-too-exciting parcels, there’s an interesting story attached to the land:

The land has been in the Beach family since 1670. It was acquired by Guy’s seventh great grandfather, John Beach, who was the youngest of three brothers who came to America on the third trip of the Mayflower in 1628. In 1645, John Beach, who had settled in Stratford, became one of the original founders of Wallingford. He gave the land to his son, Thomas Beach, and the family had lived there until 2010 with the passing of Guy Beach. Guy’s grandfather, Zerah P. Beach, was the first to establish a fruit growing business in Wallingford. Guy’s father, Zerah N. Beach, was shot in a hunting accident at 17 which eventually resulted in losing his eyesight. In spite of his handicap, he ran a thriving poultry business on the property without using a seeing eye dog or even a cane. The property had eight brooder houses where he raised his baby chicks every year. 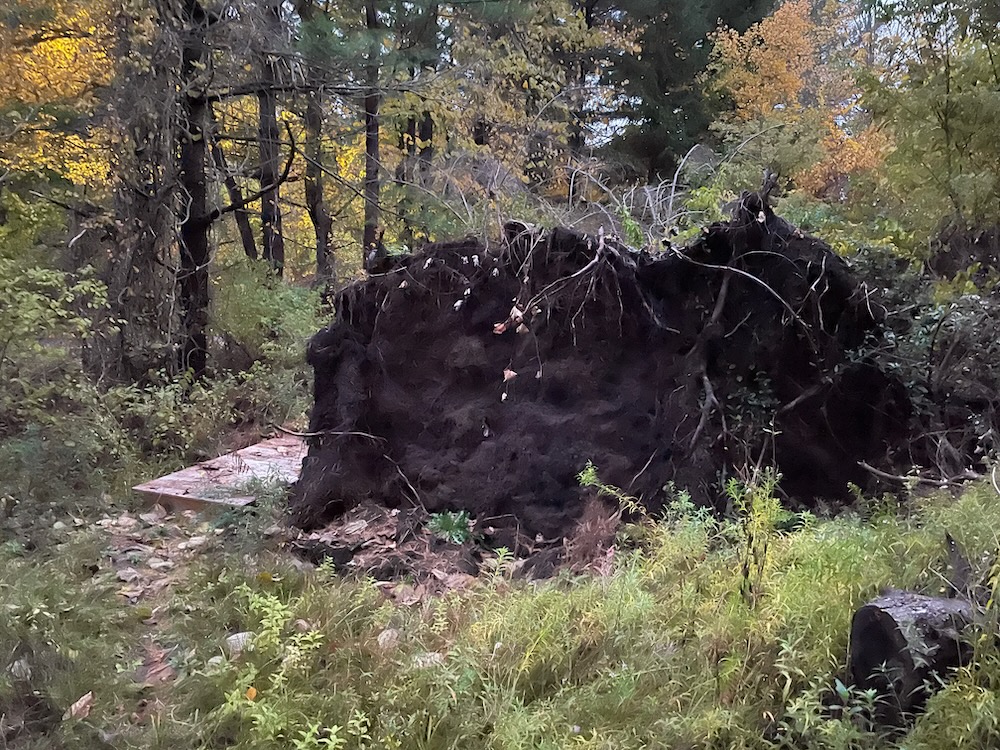 Zerah N. Beach taught poultry farming to blinded veterans from a World War II rehabilitation center. One of the veterans later founded and operated a successful poultry business in Southern New Jersey. He always credited Zerah N. Beach with being his inspiration. Zerah actively ran the farm until he died at age 74. 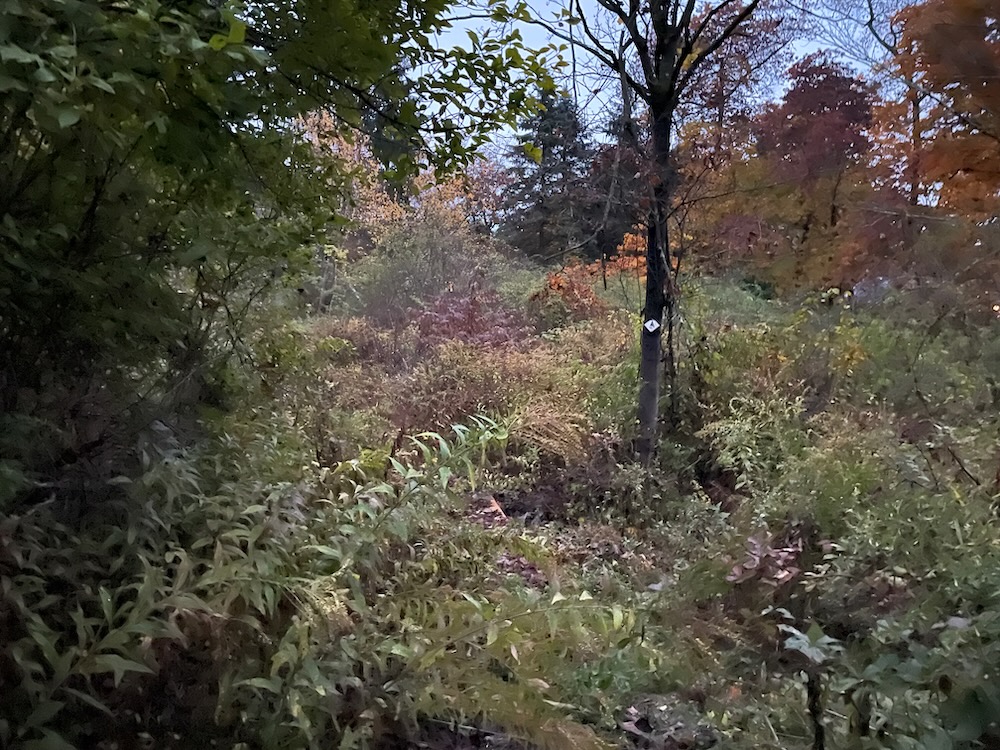 Yes, this is the trail

That’s pretty awesome. Today, the Beach Preserve is located between the Lufbery Disc Golf course and one of the seemingly dozens of Masoniare facilities in Wallingford. You must park on Wayne Road and walk a minute north up Cheshire Road to access to loop trail.

The sun had already set when I began my walk. Knowing it was a short hike, I went for it. iPhone cameras are pretty amazing in how much light they can pick up without even asking it to. These pictures were taken in deep, cloudy dusk. Impressive. 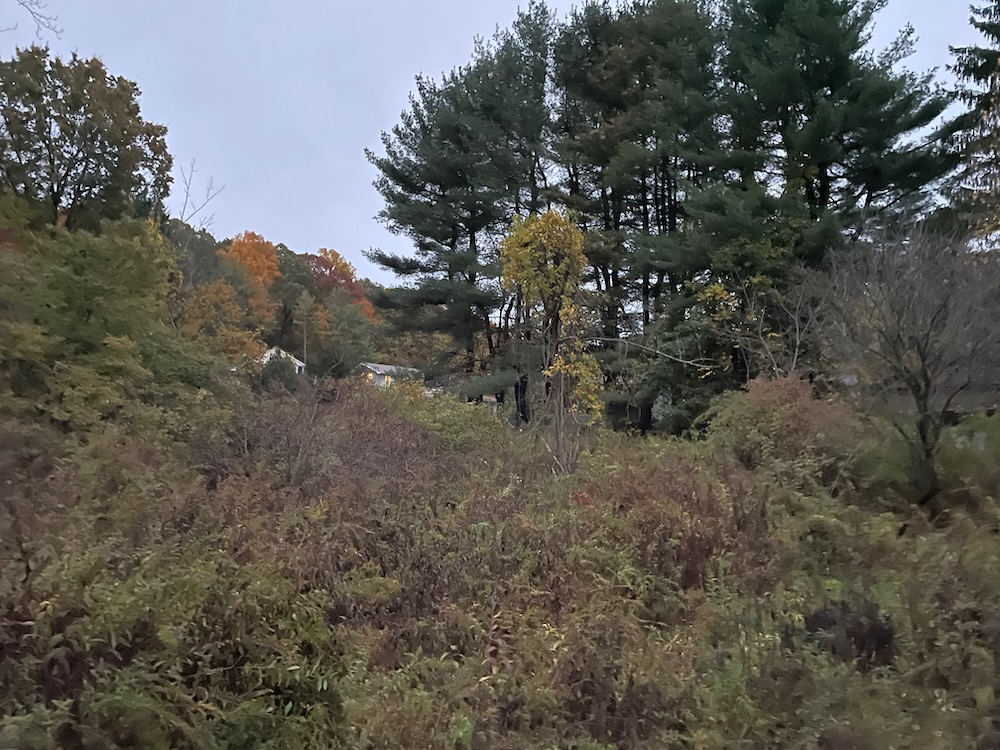 The WLT trails are marked with their little metal diamond “blazes” tacked onto trees. The trail has some rough sections of overgrowth, especially as it boldly traverses an overgrown field. Keeping this trail clear will require some serious attention in the future – and if other WLT properties are any guide, this probably won’t happen as much as we’d like it to.

Time will tell. I walked the loop counterclockwise behind neighborhood yards and the second half was a nice open trek through some tall pines. It was nice that the lights from the Masonicare facility helped me see a bit better, and before I knew it, I was paralleling Cheshire Road on my way back to the car. It was here that I passed the kiosk and signboard for the property… so I guess I was supposed to hike clockwise. Eh, it doesn’t matter as it was too dark to read anything anyway. 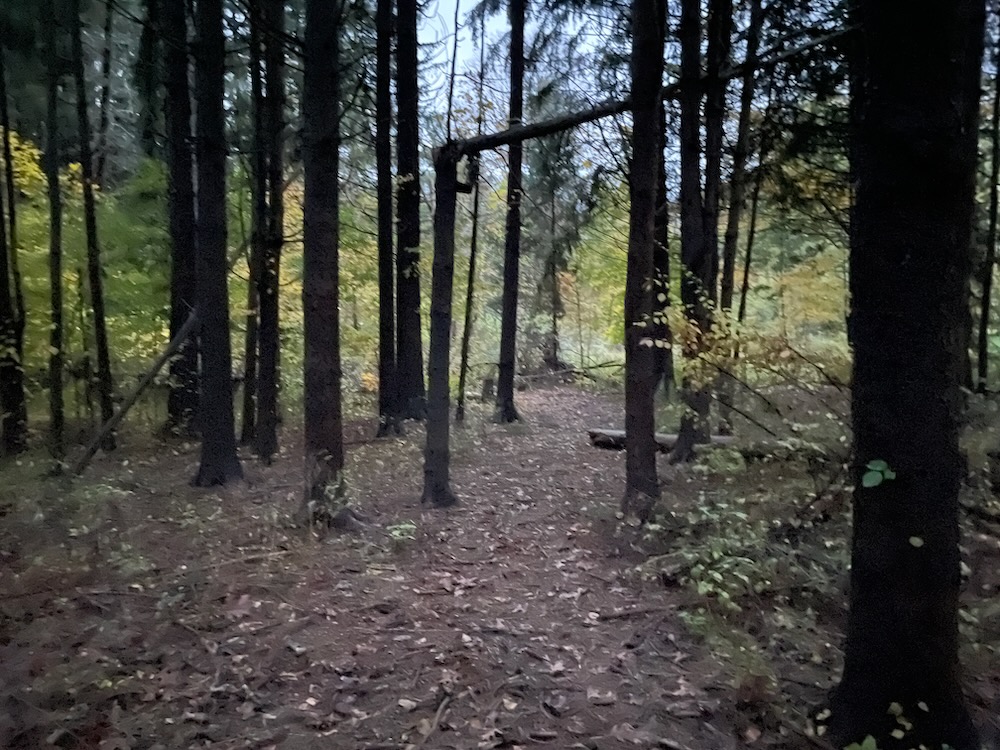 A Beach son, I believe, had a conservation restriction placed on this land in order to leave a small legacy in Zerah’s name. And I’m glad he did; not just for the fun little walk, but also because now I know that a blind chicken farmer in Wallingford was quite a prolific blind chicken farmer.

And that’s the type of thing I start conversations with at parties. I’m a big hit at parties.

Whatever Will Be, Will Be. 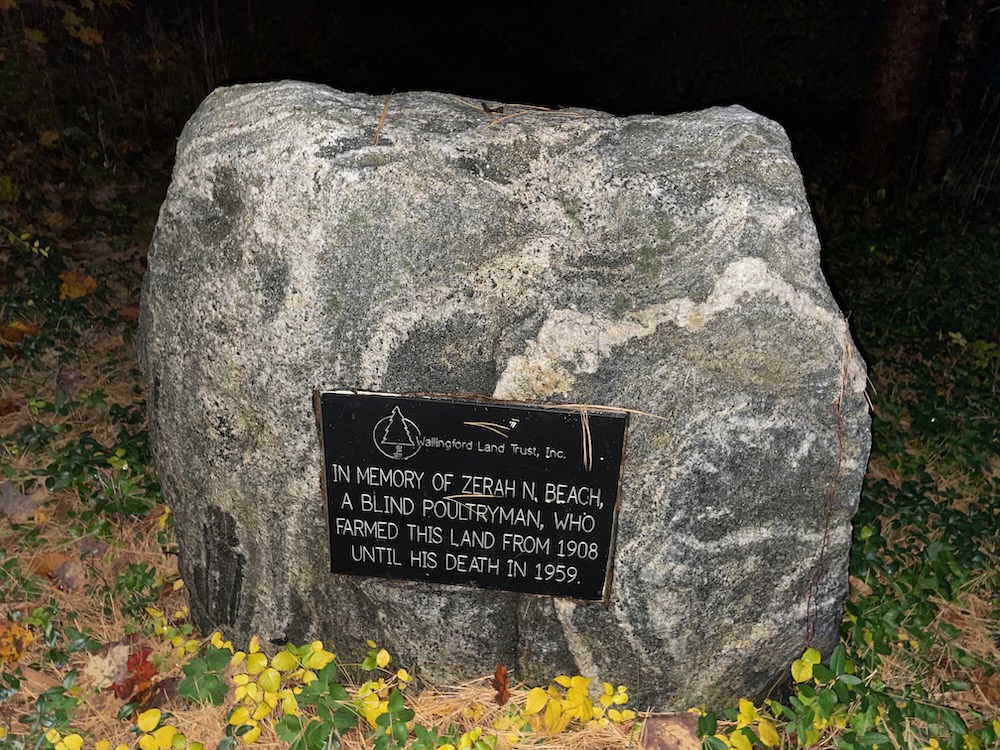