In 2017, there were no breweries in Manchester. By late summer 2018, there were three: Parable, Labyrinth, and 2nd Bridge. 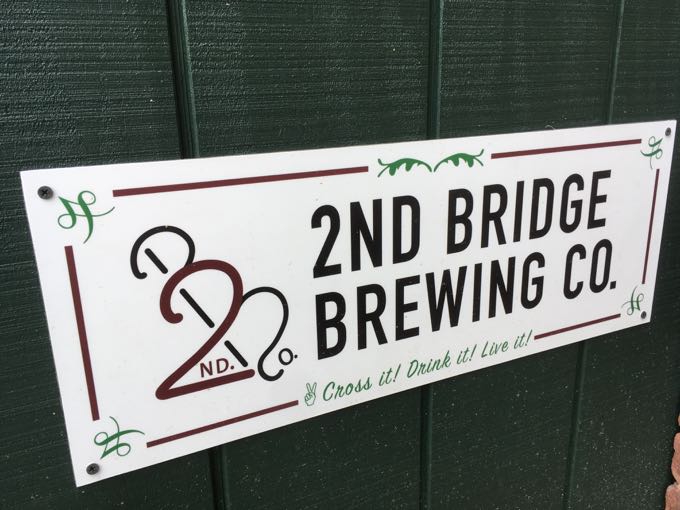 Those of us who follow this crazy industry knew that Parable was coming for a long time. Same goes for Labyrinth. But very few had any clue that 2nd Bridge was a brewery-to-be when it was a brewery-to-be. It’s web presence was weird and unclear at best. Would they be a brewery? A coffee roastery? A tea place? All three?

And then one day they opened.

I had heard they were going to be sited at the Hilliard Mills. This sent a shudder down my spine. Dark, repressed memories of Top Shelf’s stint in those very same mills still wake me in the middle of the night; drenched in sweat and fear. 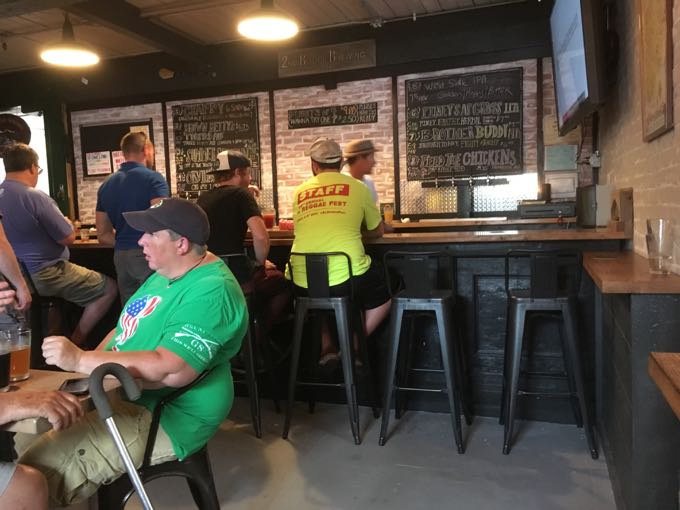 But 2nd Bridge is actually located… across the awful parking lot from where Top Shelf committed their crimes against humanity.

(For those playing along, Top Shelf left/got kicked out of their Hilliard Mills spot and did a half-assed job of building out a new space across town… which is now Parable. The guys behind Top Shelf are now trying to be restauranteurs.

That’s not working so well either. But enough about them. We’re here for 2nd Bridge! 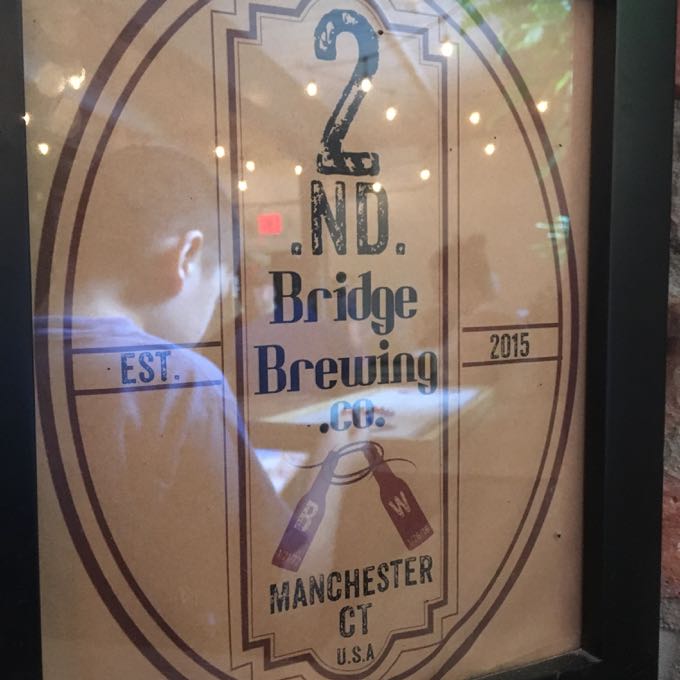 And I love a good rathskeller! Now, the parking lot is still straight outta Kabul, and the post-apocalyptic vibe of the Hillard Mills is still in full effect, but once inside of 2nd Bridge, you almost forget that Viggo Mortensen from The Road could easily appear walking through the hulking shell of a former factory out back.

*(The Road was written by Cormac McCarthy who was mentioned in the title. I thought he was a big drinker, but apparently he quit drinking after writing an ode to drinking – which is an excellent book, by the way.) 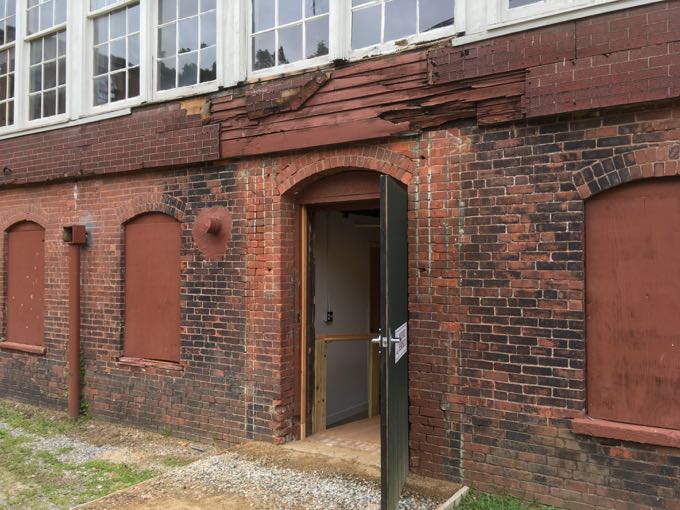 Inside is warm and inviting. They’ve done an amazing job giving this little place a unique identity in our current Connecticut sea of 77 breweries. There are table games and free peanuts (at least during the brewery’s opening weeks) and very friendly and attentive staff. And televisions and a focus on English Premier League soccer.

(The owner is an Arsenal fan, but I took a picture of this – 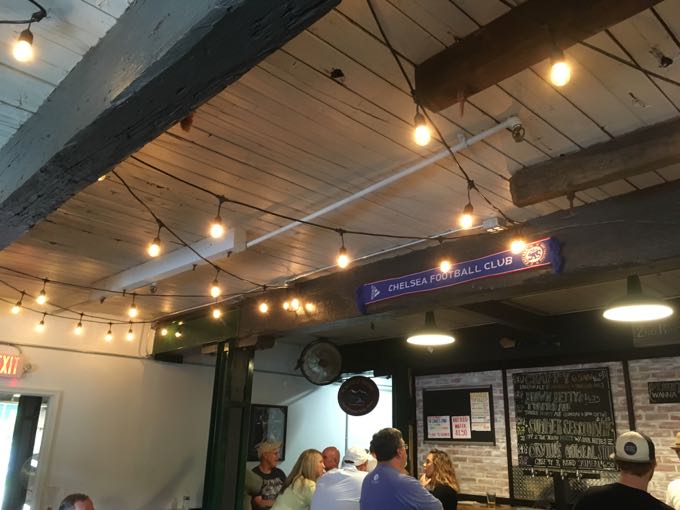 – that some Chelsea wanker hung up.)

It sounds ridiculous but yeah, 2nd Bridge has a slightly English pubby feel to it… in a sort of basement in one of the oldest mill buildings in America, surrounded by post industrial decay outside. Getting drunk here is probably pretty awesome.

But to do that, I’d need good beer. So… 2nd Bridge, do you have good beer?

Um. No. Not yet. But I visited just a month or so after opening, so please… please visit yourself now that they’re a bit more practiced. (Unless you’re reading this many years in the future and they’ve closed. In that case, you’re too late.) 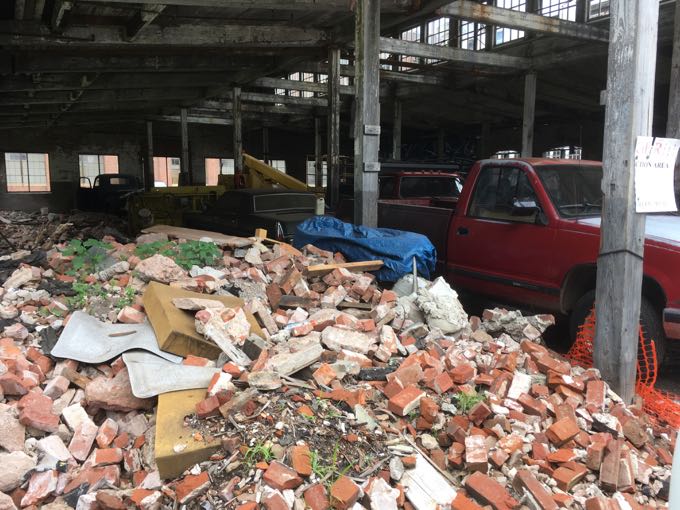 Literally next to where I parked. I don’t exaggerate.

I like that they had a wide range of styles on tap. There is nothing worse than a new brewery opening with an IPA, a DIPA, a NEIPA, and some other variant thereof. I tried a $9 flight with a wide(ish) range: 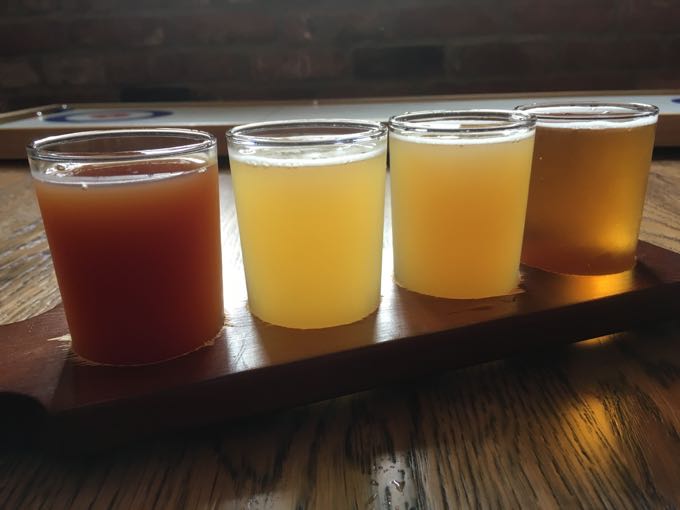 That’s the Chappy on the left. It looks gross.

I do know that it made for a terrible English Ale; flat, weird, artificial tasting. When you open a new brewery, especially one that promotes itself as a haven for EPL fans, just make a normal damn English Ale.

The Feed the Chickens saison was… okay. The Piney Sap Grass IPA was way too flat, warm, and just sort of limped from my glass to my throat. I was bummed about this one because I miss real IPA’s with hops and resins from the pre-NEIPA, pre-garbage fruit, pre-freaking milk sugar IPA age. 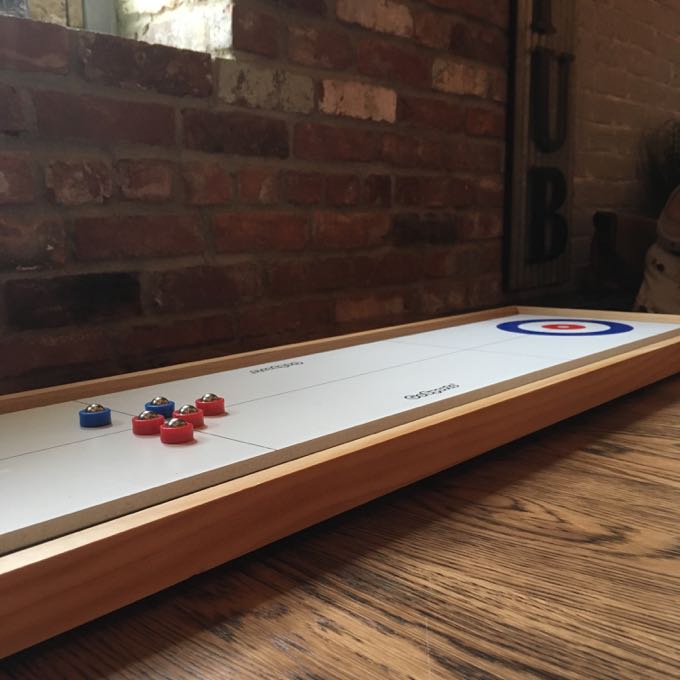 But the pine was barely there and the herbal qualities were all dull and lifeless. Now again, this was very early in 2nd Bridge’s life. I just saw on untappd someone compare this beer favorably to Sea Hag and someone else say it’s just like Tree House’s Sap.

So there you go.

The Summer Session pale was excellent. Far and away the best of the four I tried during my visit. It was like all of the flavor and body from the other three were all put into this nice little pale. 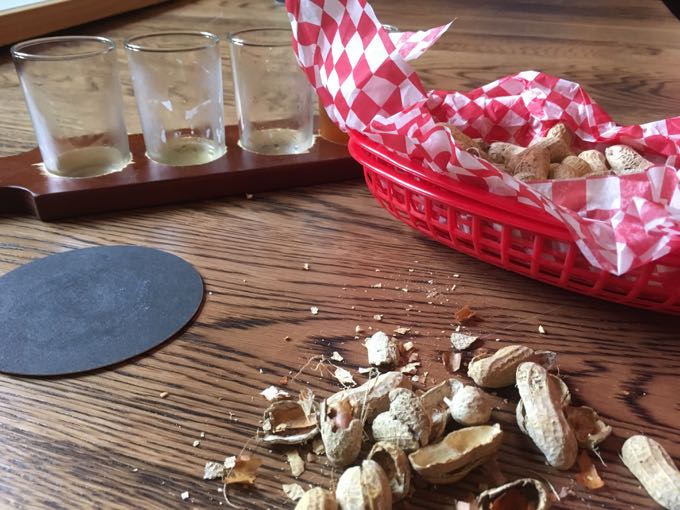 Yes, the beer you’d expect to have the least amount of oomph, had the most amount of oomph. But that’s what sometimes happens when new spaces open. I guess. Maybe they sped to opening to beat Labyrinth (who opened about 6 weeks later) and some of the beers just weren’t ready or perfected yet.

And what about some of the other 2nd Bridge “stuff?” The logo… I’ve had more than one person tell me it’s the worst logo in Connecticut brewing. I disagree, but it’s a rough one. Which is a shame, because you know whoever came up with it was really proud of it.

You’ve got the “2nd.” And the 2 B’s for Bridge and Brewing, and the clever little “Co.” Unfortunately, it reminds everyone of a coathanger for some reason. (Which I’ve argued isn’t a bad thing… as in, “come in, hang up your coat, and stay a while!” 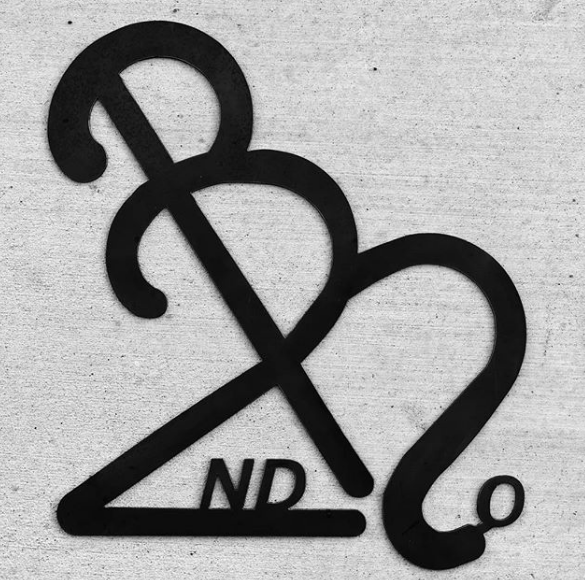 And their website is a little weird. Since they’re relatively new as I write this, I’ll give most of it a pass. Just way too many stock photos. And a beer named Weight of Sound. Look, there are only a finite number of beer names out there, and there are bound to be repeats all over the place.

But please… please don’t name your Connecticut beer the same name as another Connecticut beer, especially from one of the greats like Beer’d. This happens so much that it’s clear most brewers have little to no awareness of their competition. (And who really can be anymore?) 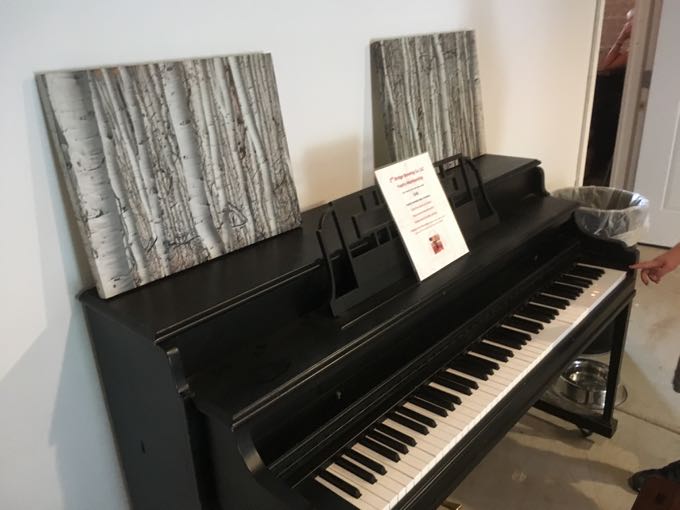 But this is something that shouldn’t happen. Beer’d’s Weight of Sound is fantastic, by the way. (I realize tap only at a little rathskeller brewery in an abandoned factory in Manchester isn’t going to hurt Beer’d’s beer. But still. It bothers me.)

In the end, I liked this little joint for some weird reason. The beer wasn’t very good and the location is the pits, but I dunno… it has panache. Gumption. Something. I’d wager that on a snowy Saturday evening, with some candles going and some music playing… 2nd Bridge could have one of the cooler vibes of any brewery in the state. I like it’s little nooks and anterooms.

(I like quite conversation in dark bars. This place seems great for that – but also has a lively bar area for you people who like… people.)

Here’s hoping everything else here becomes as good as the unique vibe in the near future. 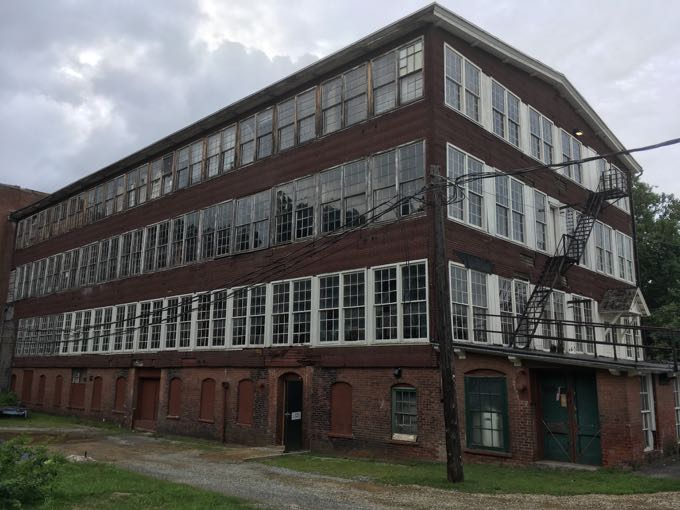